The London Guide and Stranger’s Safeguard against the Cheats, Swindlers, and Pickpockets (1819), written by “a gentleman who has made the police of the metropolis an object of enquiry twenty-two years”, will keep the American abroad safe and sound. Chapters, of which the book has six, are sub-divided into sections that should have any reader of ambition and vim reaching for their passport and heading to the sink of depravity post haste.

CHAPTER VI, Of Conspirators and Informers 227.

The book also features a handy glossary of key vocabulary (two pages of which are featured below). 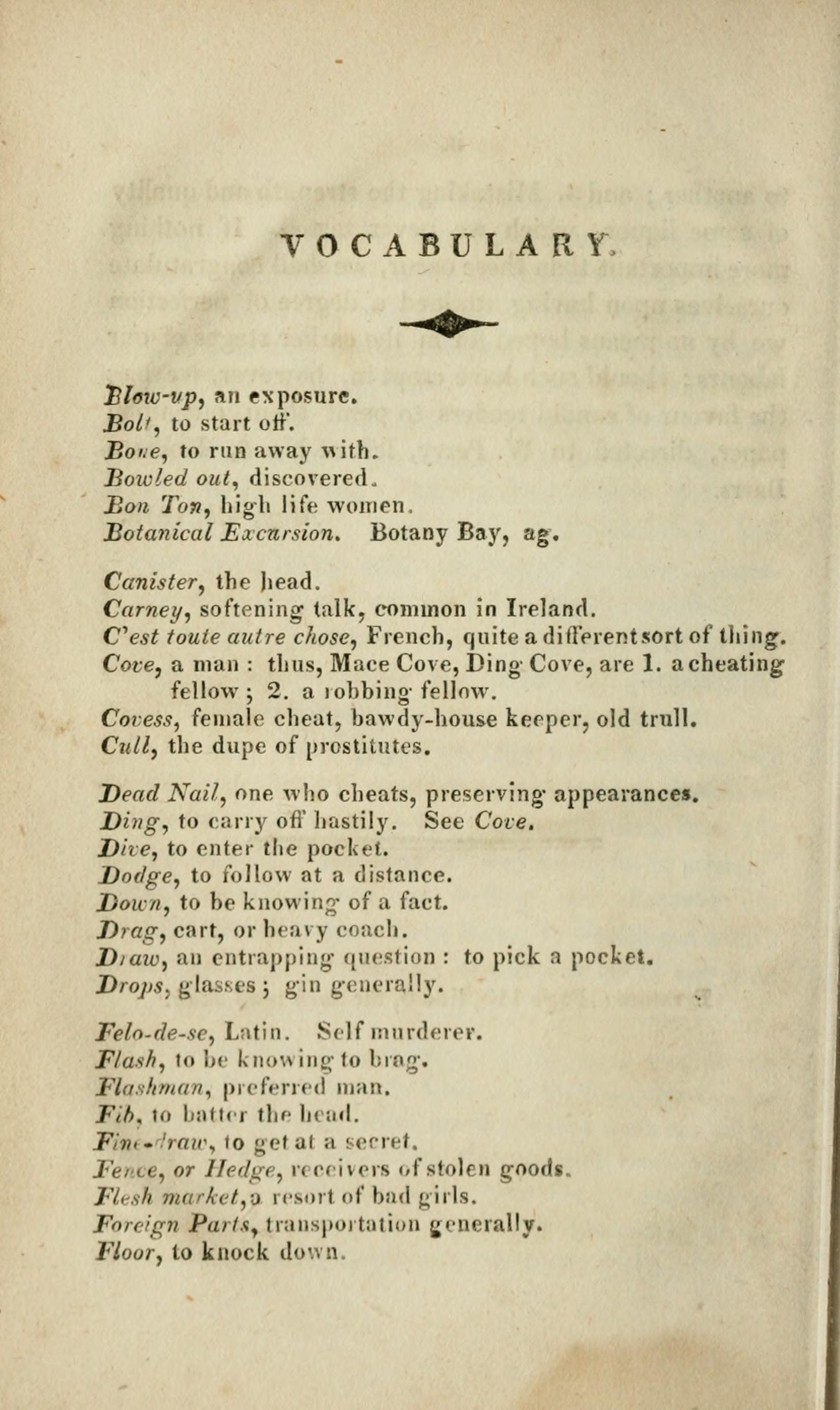 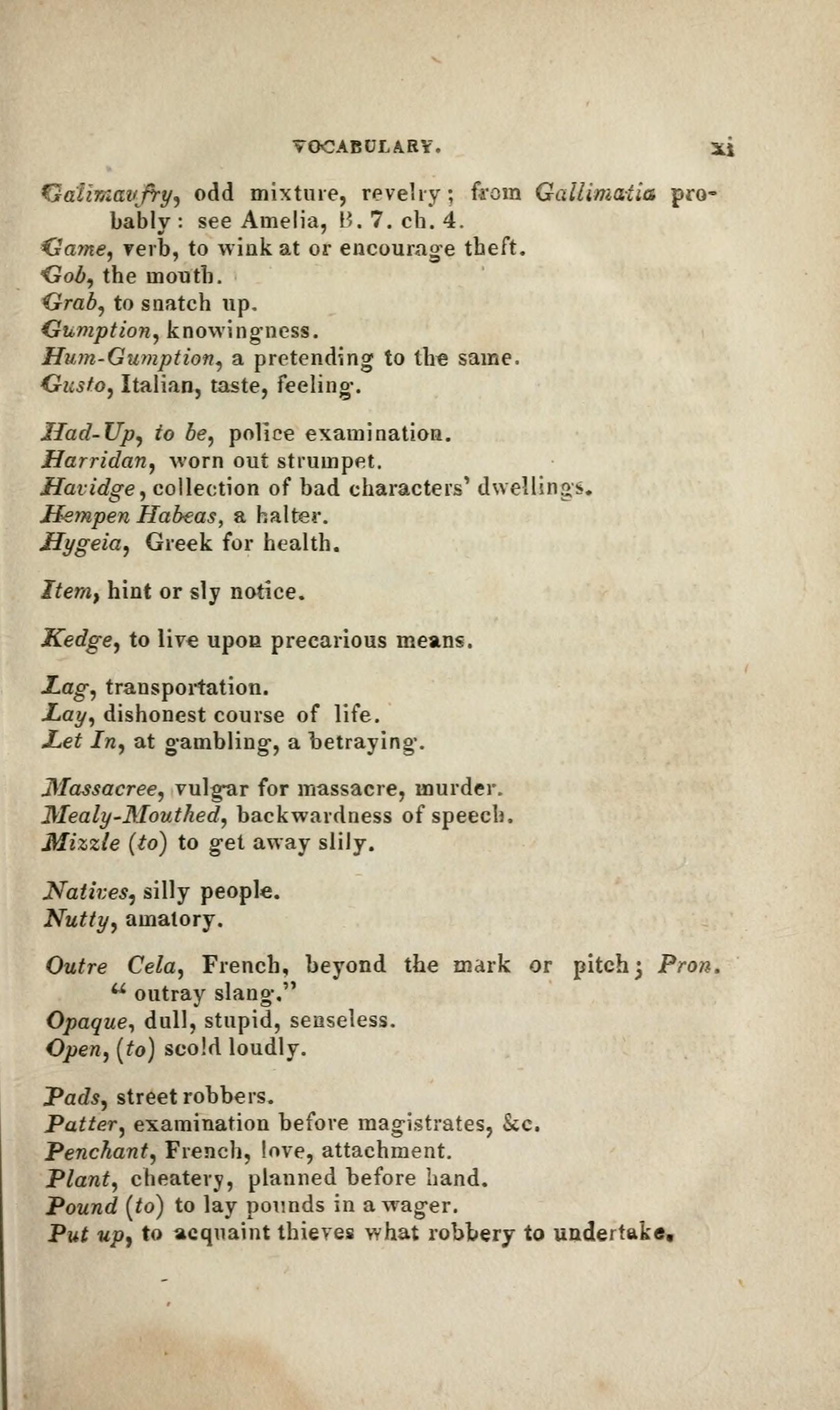 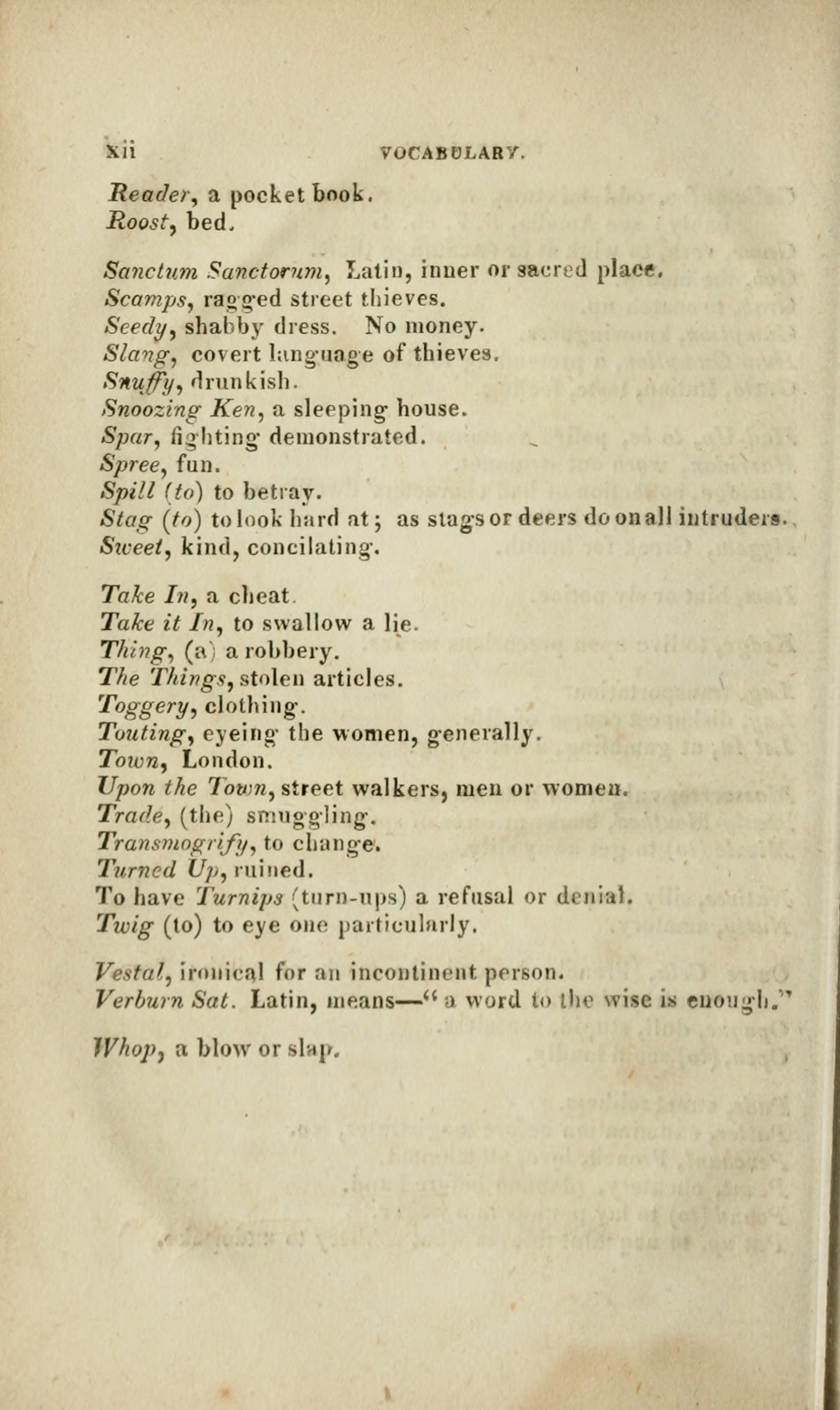 When a stranger first arrives in this overgrown city and finds upon alighting at the inn, that he has still some miles perhaps to go before he can see his friends he is naturally anxious for advice how to reach them in safety, with his luggage. But if this be the ease with those who have got friends, what is the dread of such as have a home to seek, business to look after, or place of service to obtain, without a friend to guide their steps, or a candid person to warn them of their danger; to tell them of the precipices, pit falls, and moral turpitude, of a large proportion of the population of this great metropolis? To supply the place of a living friend, and in some cases to perform the necessary part of one, by directing the stranger in the choice of companions, and what characters he should avoid, I have compiled these sheets; in which will be found “all I know about the matter,” and all I could “learn out” by “fine-drawing” of others.

Was London so terrible a place? The proles might have been revolting, but England was cursed with a feckless, dissolute royal family and treacherous government.

An old, mad, blind, despised, and dying King;
Princes, the dregs of their dull race, who flow
Through public scorn,—mud from a muddy spring;
Rulers who neither see nor feel nor know,
But leechlike to their fainting country cling
Till they drop, blind in blood, without a blow.
A people starved and stabbed in th’ untilled field;
An army, whom liberticide and prey
Makes as a two-edged sword to all who wield;
Golden and sanguine laws which tempt and slay;
Religion Christless, Godless—a book sealed;
A senate, Time’s worst statute, unrepealed—
Are graves from which a glorious Phantom may
Burst, to illumine our tempestuous day.