Being able to turn invisible is such a compelling idea that it’s been a part of storytelling since the dawn of time.   The helm of Hades rendered Perseus invisible, allowing him to sneak up on and slay the gorgon Medusa.  Fairy tales featured magical cloaks turning the wearer invisible, there is the Ring of Gyges in Plato’s The Republic and, of course, there were ghosts and poltergeists unseen to human eyes.

Tolkien worked the idea into his stories – where a function of the most powerful magical object in Middle Earth rendered its wearer invisible and of course Dumbledore gives Harry Potter the Cloak of Invisibility as a Christmas present anonymously and told him to “use it well.” We often think of invisibility as a fairly lame super power (ex. Susan Richards, the Invisible Woman from Fantastic Four) but when you stop and consider it, invisibility has incredible repercussions. In H.G. Wells’ Invisible Man, Griffin goes mad, and in Lord of the Rings, a normal Hobbit becomes Gollum. 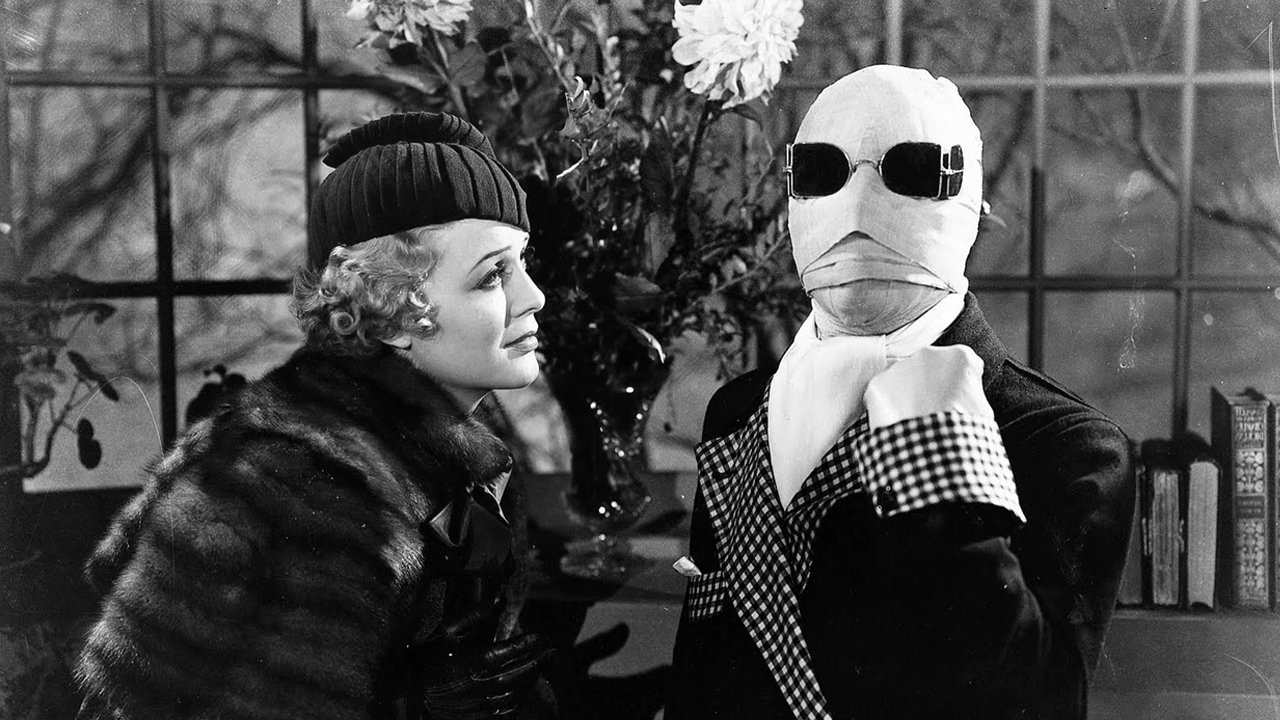 Claude Rains and Gloria Stuart in The Invisible Man (1933)

So, it is no wonder that the Invisible Man theme made its way to film, notably in James Whale’s 1933 Universal classic starring Claude Rains.  Since then, it has been used countless times – often with less-than-impressive results.  Let’s have a look at the many, many examples in cinema up through the 1980s.  We can’t possibly cover them all, but we’ll make a valiant attempt.  Enjoy. 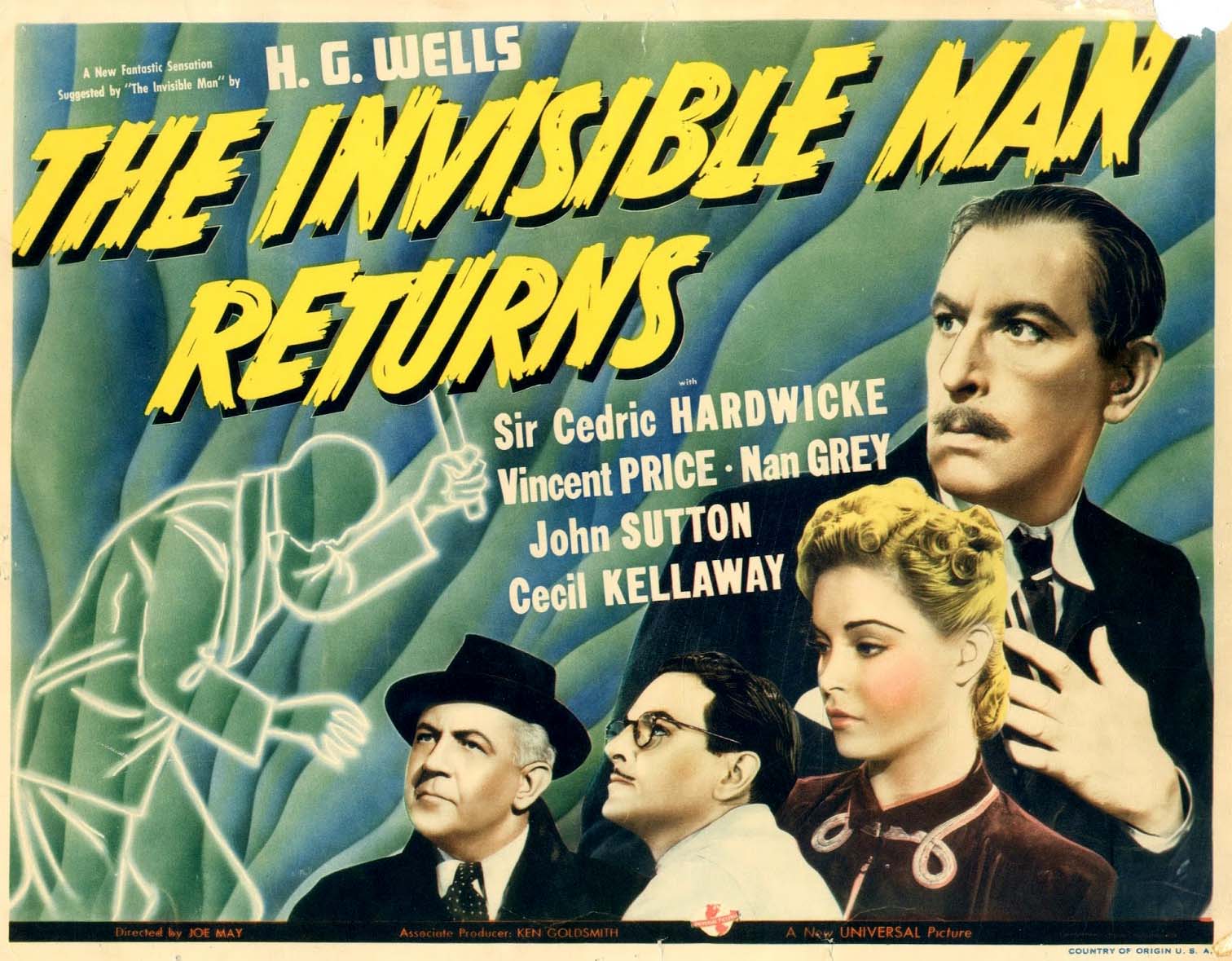 The 1940s saw a number of Invisible Man movies – mostly “sequels” (or more accurately, loose offshoots) of the H.G. Wells classic.  The Invisible Man Returns (1940) is notable as being Vincent Price’s first film role.   It was well-received, but didn’t really bring anything new to the table.  For me, the big step was made that same year with The Invisible Woman… 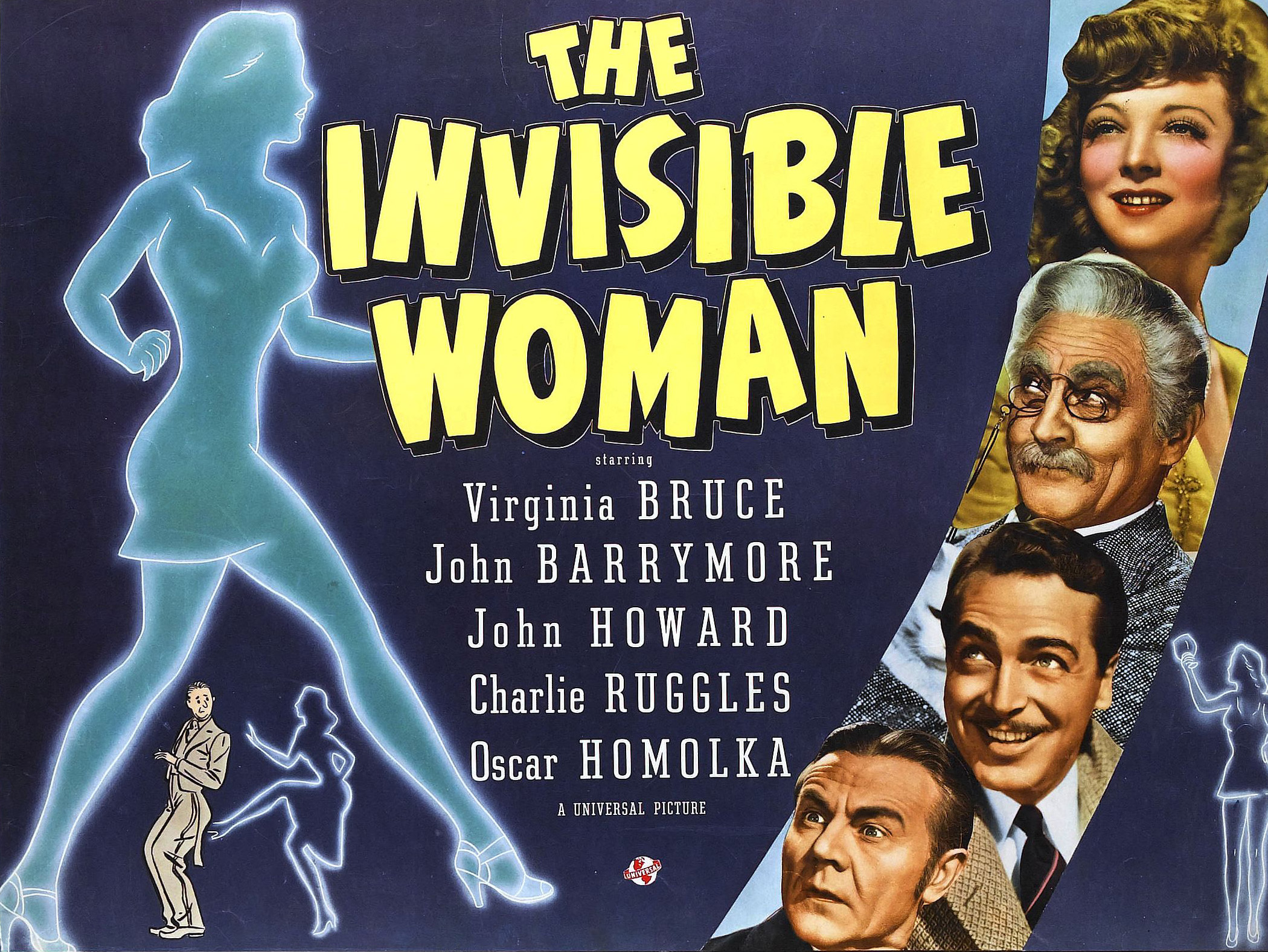 This showed that we don’t need to stick to the H.G. Wells template – we can branch out, and use this plot device for all types of films.  The Invisible Woman was actually a comedy.  The main character, Kitty, uses her newfound power to get back at her boss and then some gangsters. 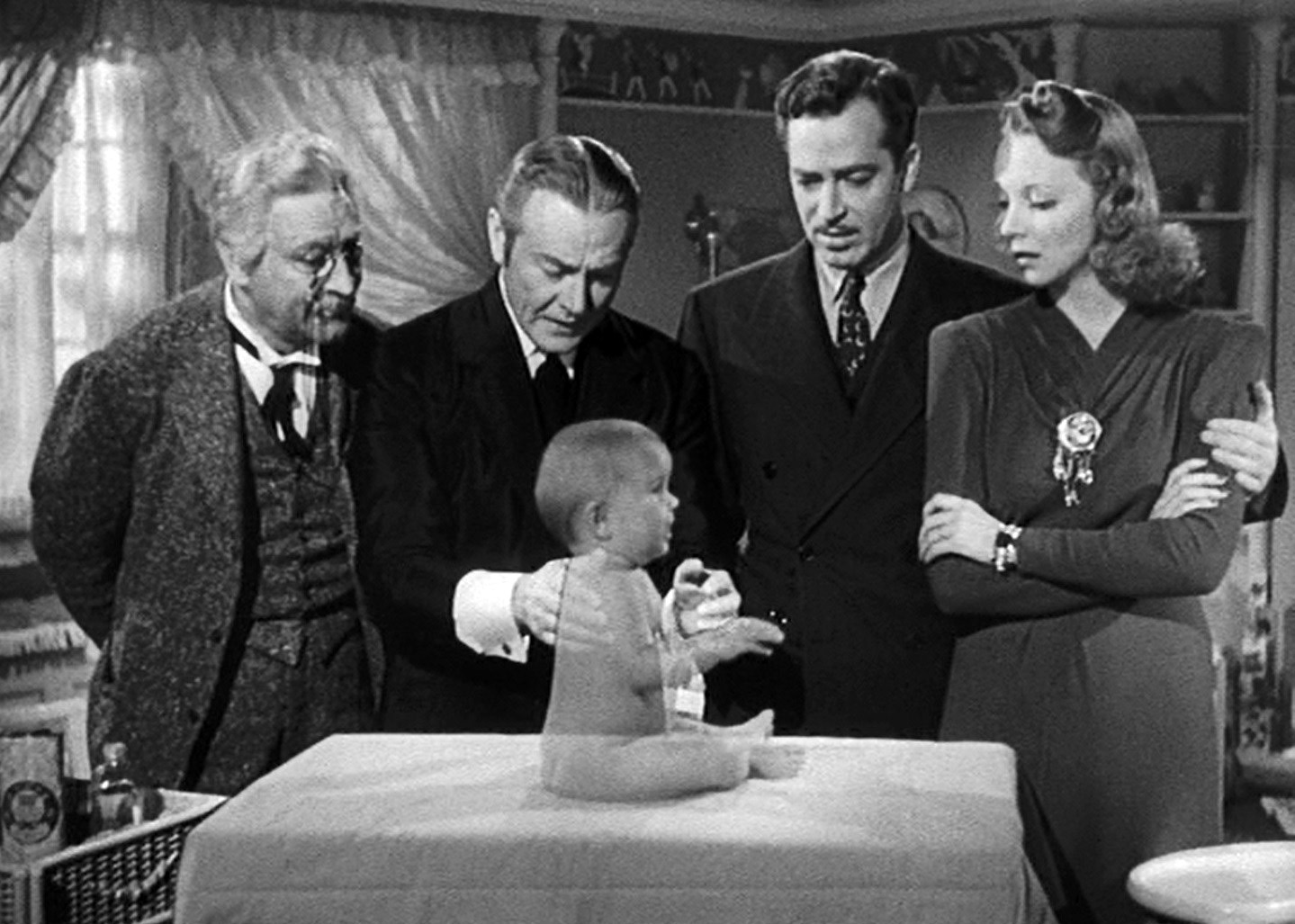 Hilariously, we find the invisibility is hereditary as her new baby also has the power! 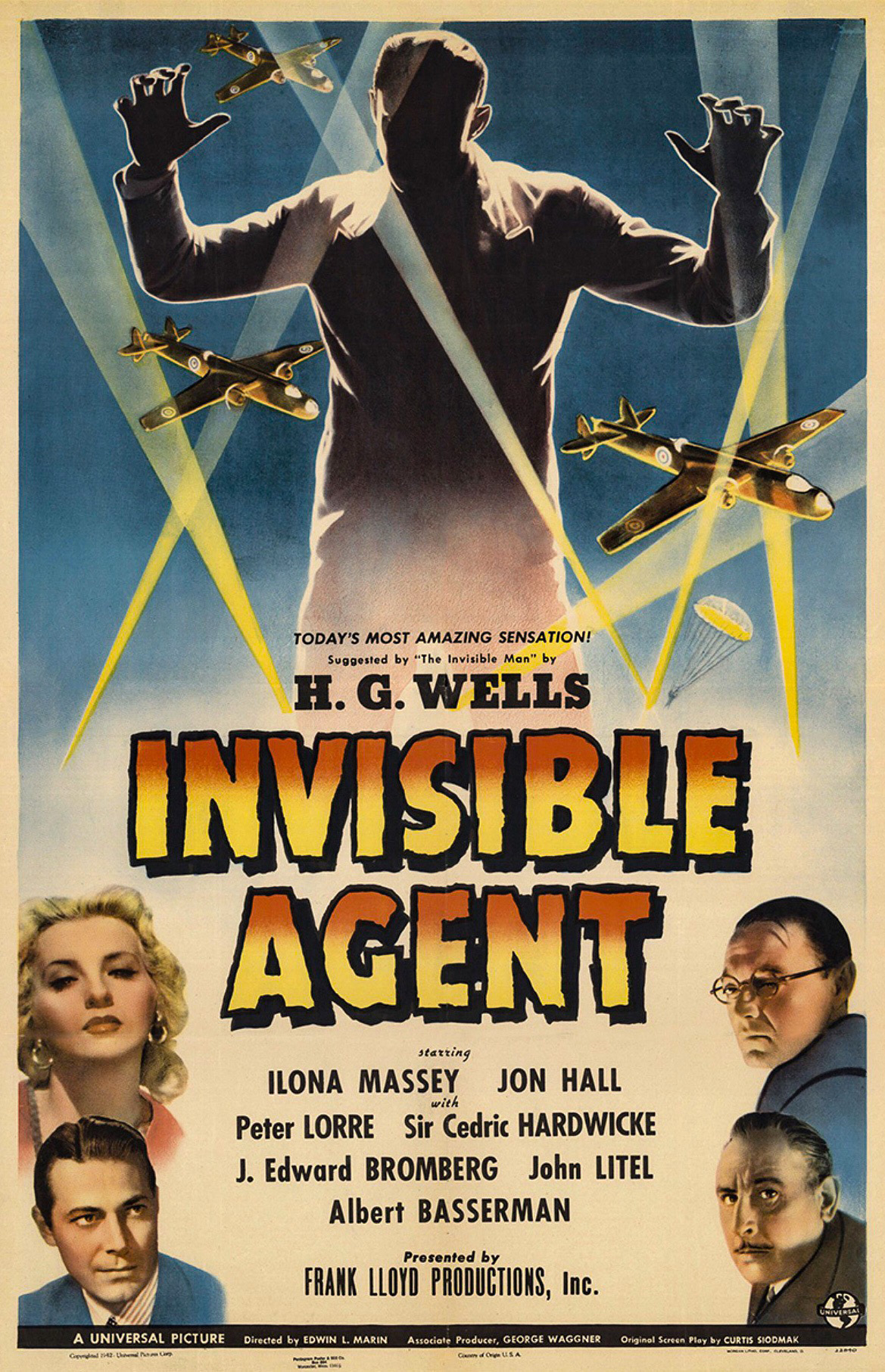 It was inevitable that we’d get a movie exploring invisibility in a military context.  The Invisible Agent (1942) tackles the idea in a propaganda film, with an invisibility potion used against the Nazis, with Peter Lorre as the German villain.  Universal followed it up with The Invisible Man’s Revenge in 1944, which didn’t add much to the Invisible Man trope, but served as a respectable bookend for the series.

In which the Invisible Man story is interpreted by other nationalities, and it also gets the B-movie treatment. 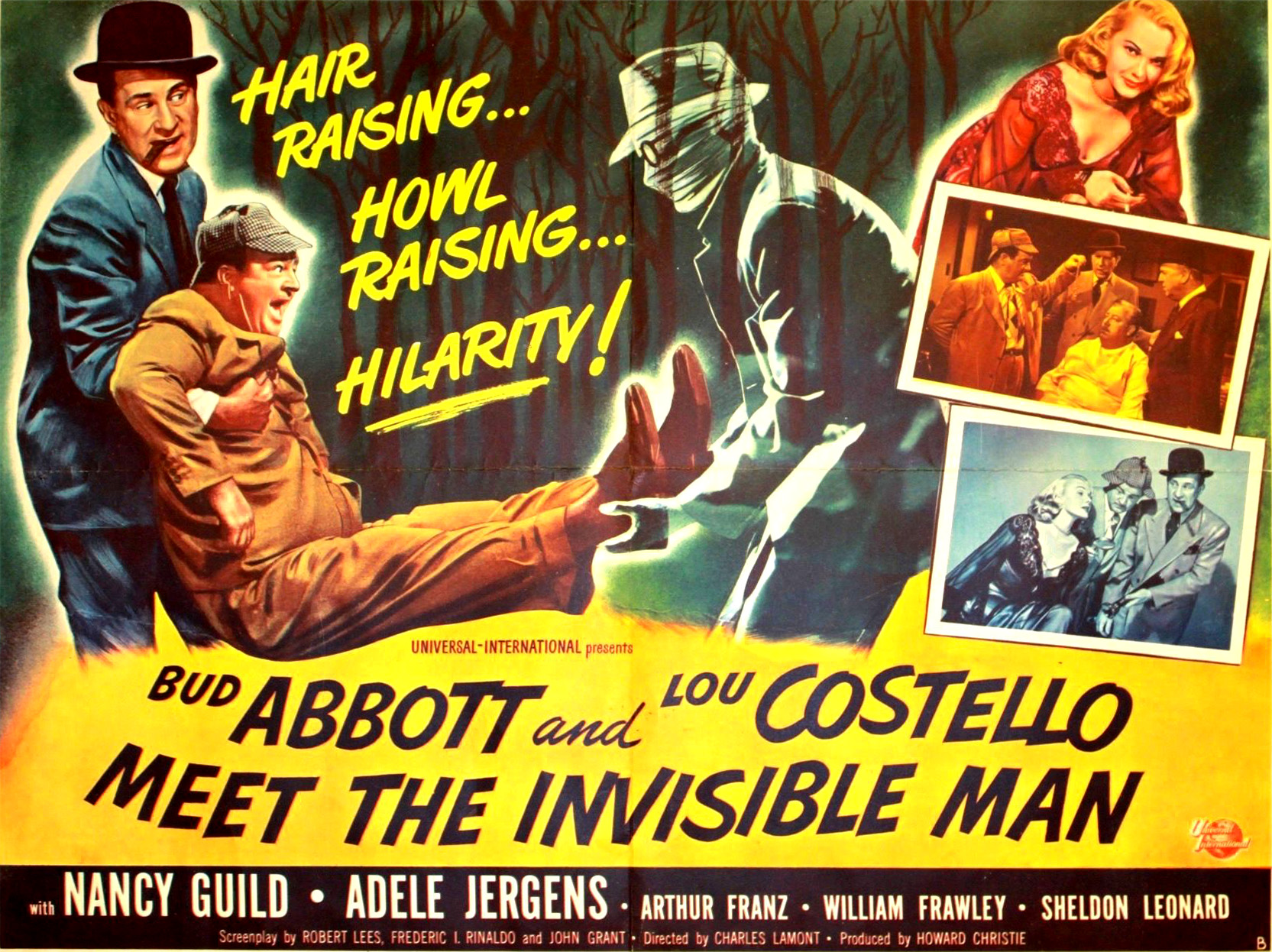 1948’s Abbott And Costello Meet Frankenstein was such a hit that Universal decided to launch a whole series of these comedic monster movies.  In 1951, they released the Invisible Man “episode” where the titular character is a boxer who uses invisibility for good (to clear his name); I suppose having an invisible man become corrupted and shattered by his power would have been too dark and heady for the Abbot and Costello series. 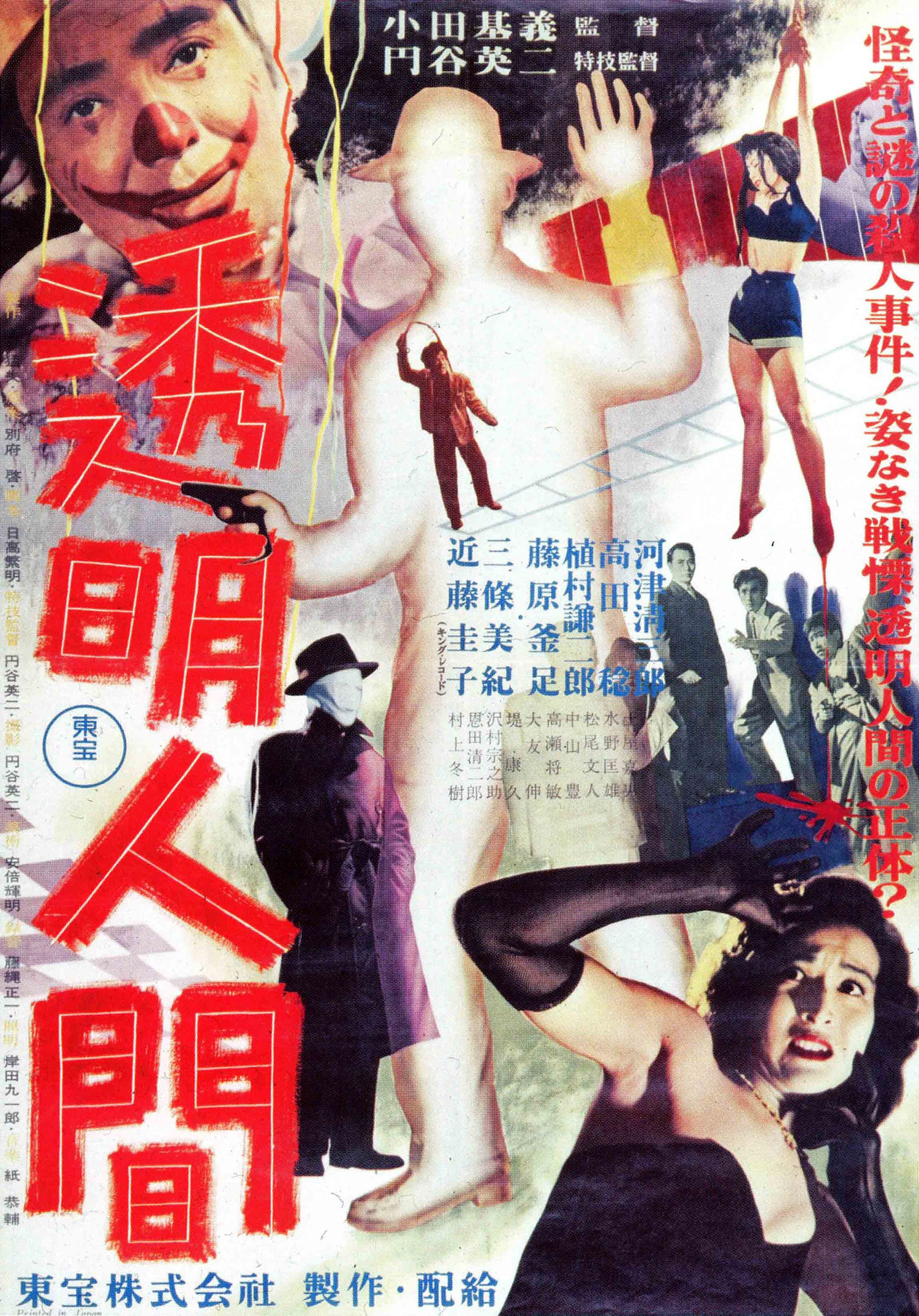 In 1954, Japan got in on the Invisible Man action with Tōmei Ningen (透明人間), but it was overshadowed in a big way by another monster that premiered that same year – Godzilla.  Nonetheless, it was followed a few years later by Tomei Ningen To Hai-Otoko (Transparent Man Vs. The Fly Man). 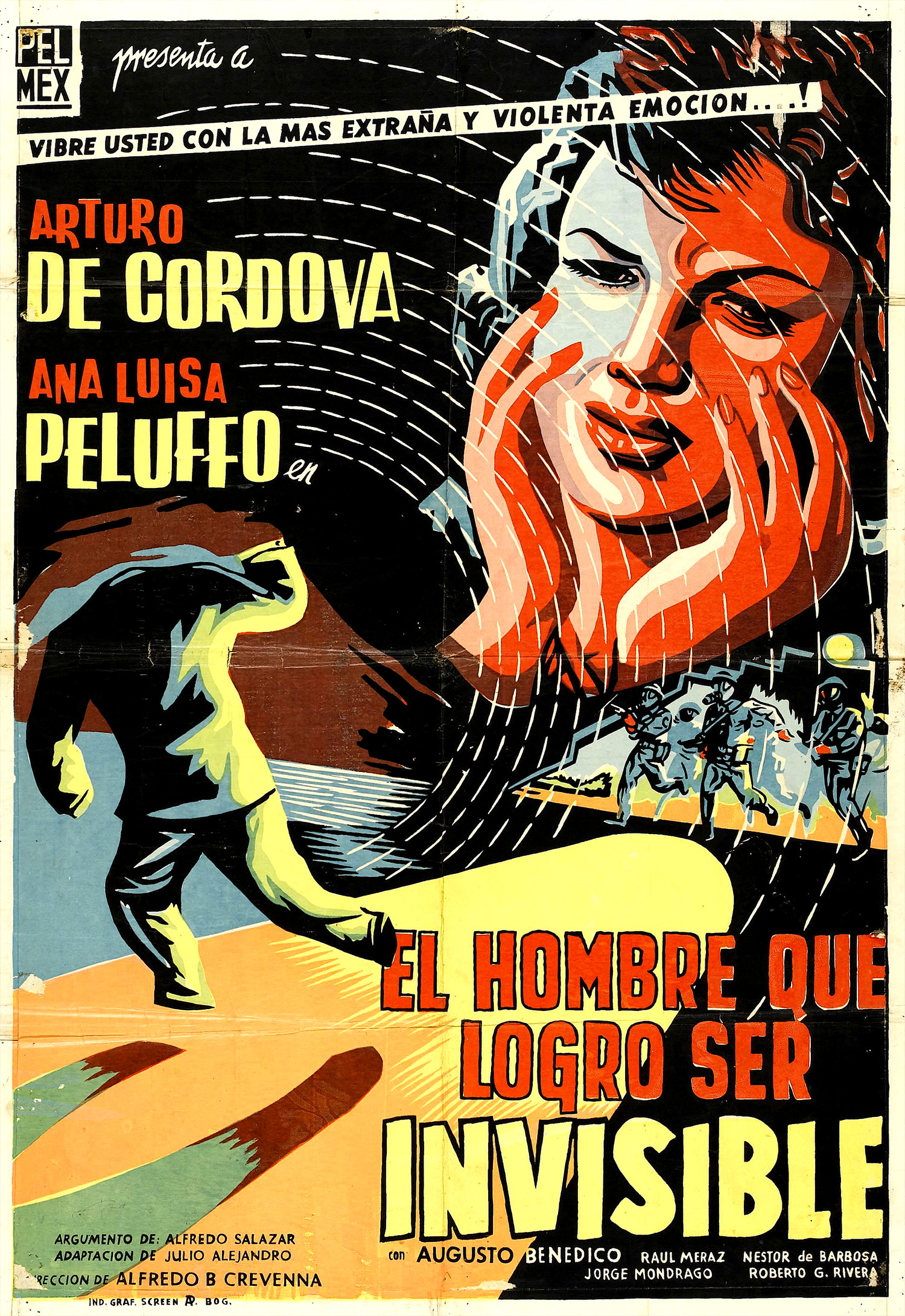 The Mexican take on the Invisible Man, El Hombre Que Logró Ser Invisible, was released in 1958.  It actually follows the same plot as the Abbot  & Costello film where the protagonist uses the ability to clear his name.  However, unlike the Universal comedy, the character goes mad and tries to poison a population’s water supply!  With a uniquely Mexican spin, containing strong Catholic overtones, the Invisible Man in this movie believes he’s a spirit messenger of “the highest judge.”

The film also serves to illustrate how intrinsically hard it is to make an Invisible Man movie.  The special effects are horrible – at one point, they just put him in a big suit, hoping he’ll be hidden among the folds. While the Universal films were a bit more adept at capturing invisibility, it still comes off as rather fake and clunky.  There is an inherent problem here – even with CGI, you still have the challenge of showing action and interaction with his/her surroundings with a character that is unseen!  I’m not quite sure if it has ever been done really well, or whether it’s even possible – but the very idea is so compelling, studios keep on trying. 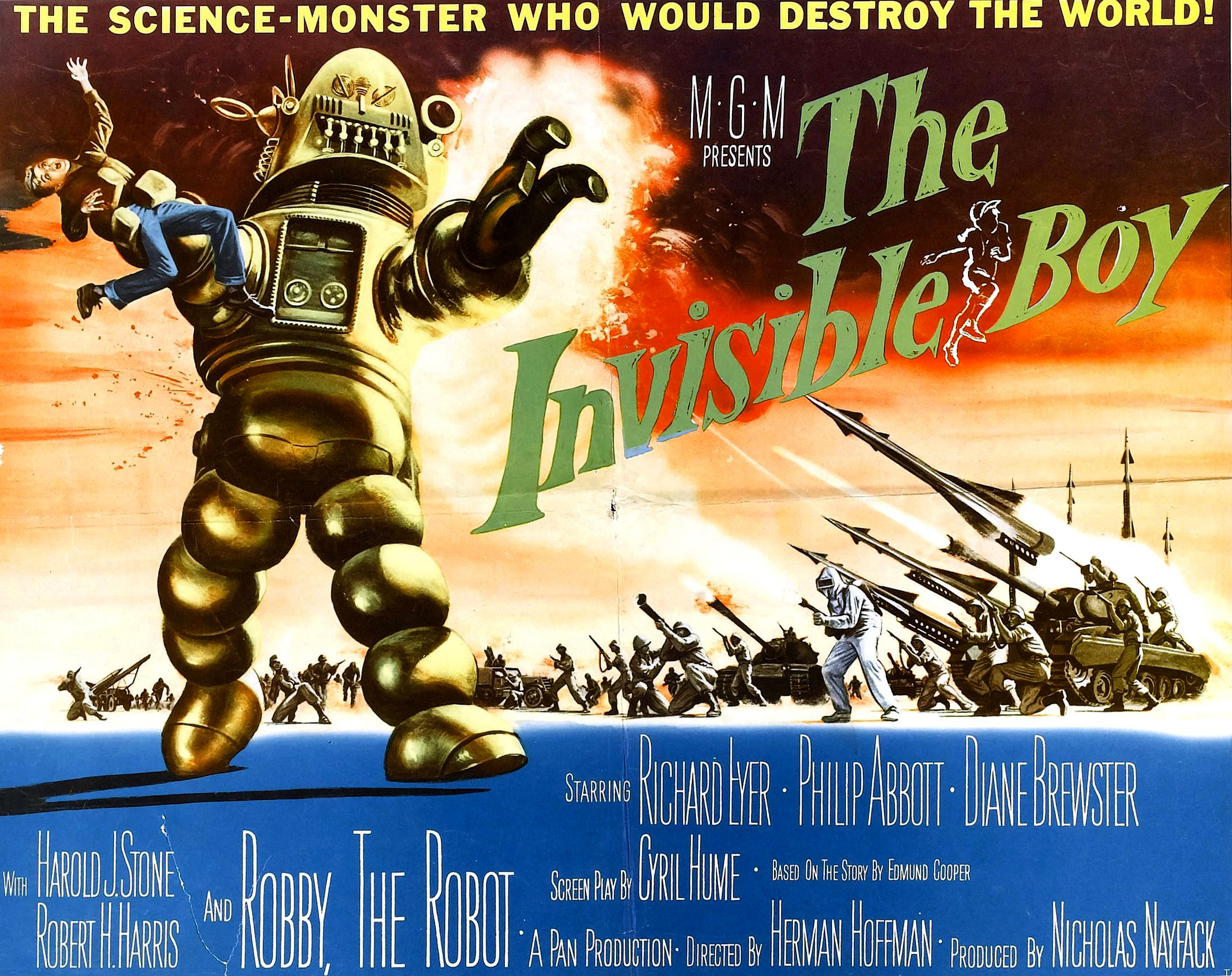 In 1957, MGM took a stab at the Invisible Man with The Invisible Boy.  Timmy tries to evade his mother and uses Robby the Robot to make him invisible.  It’s pretty terrible – but brings to focus a big problem with the invisibility trope… the issue of whether clothes become invisible.

So far, it’s been pretty established that clothes are unaffected by the invisibility power.  So, in order to be truly invisible the person must shed his or her clothes, otherwise they’ll look like floating suits – which could be used for comedic purpose as in The Invisible Woman…

But this presents a problem – when truly invisible, we are to assume he or she is fully nude; an idea that didn’t quite sit well with mid-century sensibilities.  In the case of The Invisible Boy, are we to have a young boy presumed nude?  The film slyly gets around this by having an electro-magnetic field surround Timmy, and everything within it becomes invisible, including clothes.

But the implied nudity problem would continue to be a hurdle.  A couple decades later, in Amazon Women on the Moon, this problem is brilliantly satirized (with Ed Begley Jr. prancing around in the buff, thinking he’s invisible). 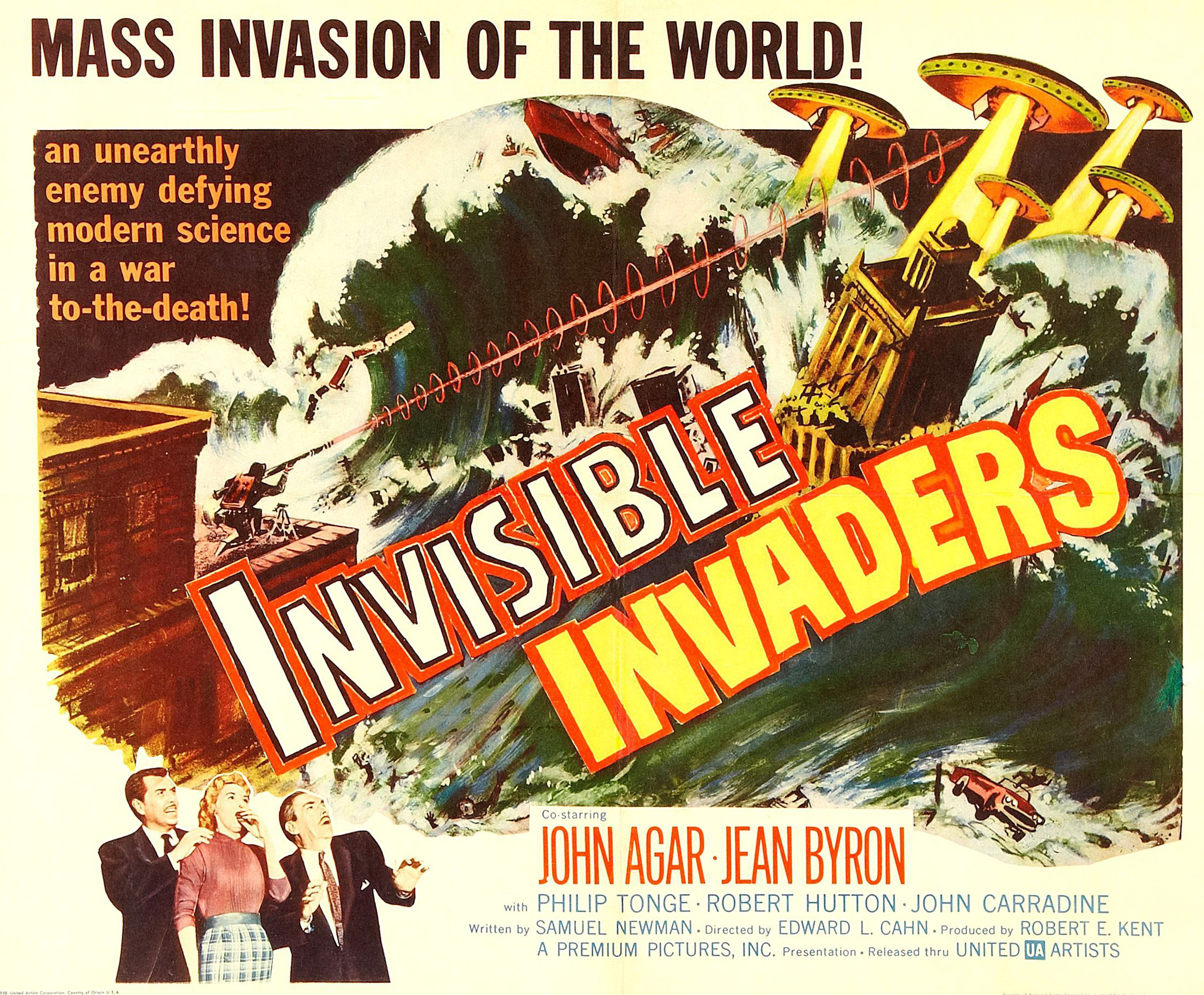 A unique angle here: a nuclear physicist is killed in a radioactive accident, and his body is possessed by an invisible alien (!).  His reanimated body warns humanity that unless we stop nuclear testing, the world is going to end.  A pretty campy, low-budget affair – and a bad omen for the invisibility genre for the coming decade. 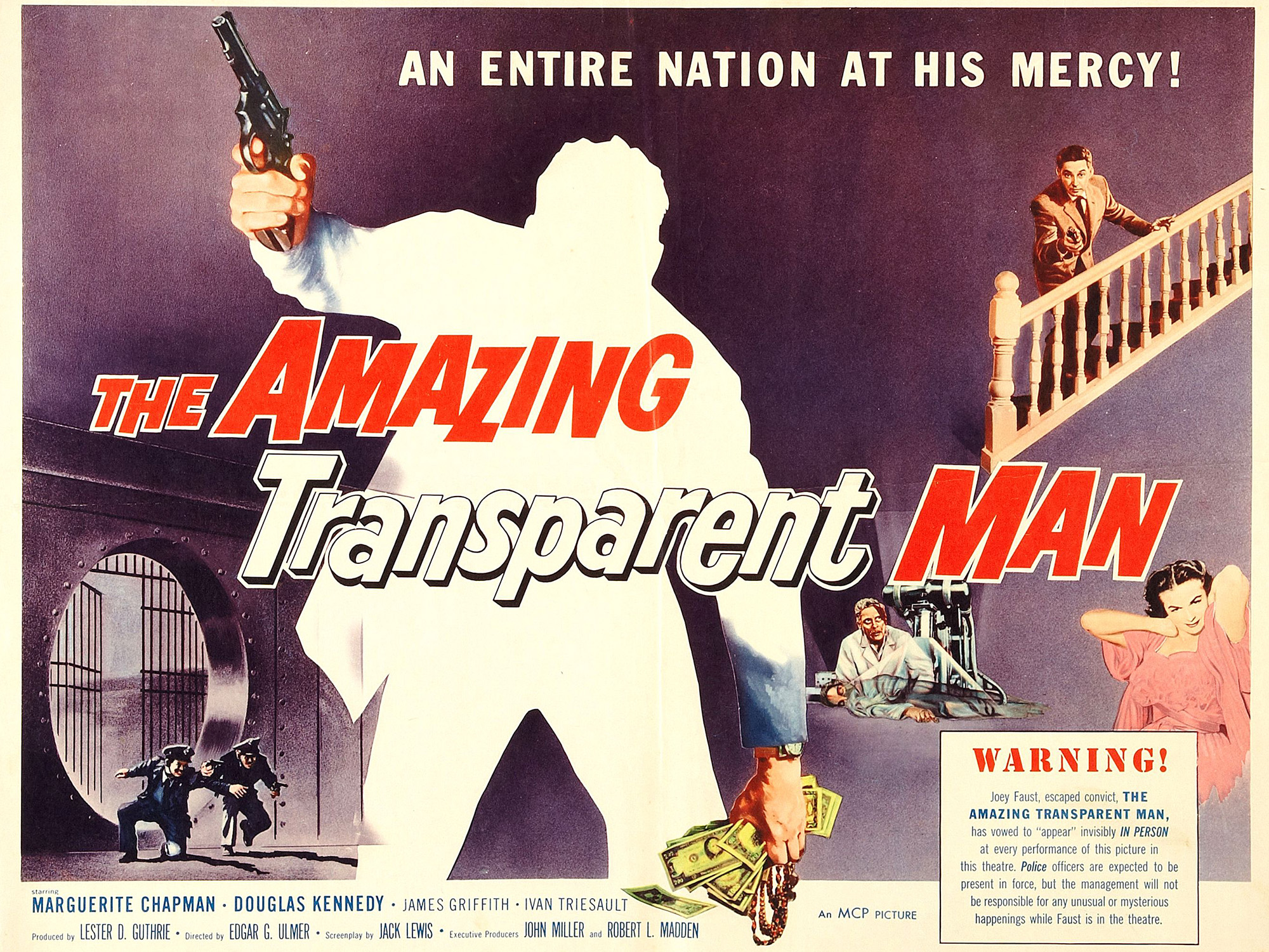 The Amazing Transparent Man (1960) marked the entry of the Invisible Man into the sixties – and if this was an indication of things to come, we’re in trouble.  The titular character is a safecracker who uses the ability to commit crime.  It’s so low budget and hurriedly made, it became fodder for Mystery Science Theater 3000 over three decades later. 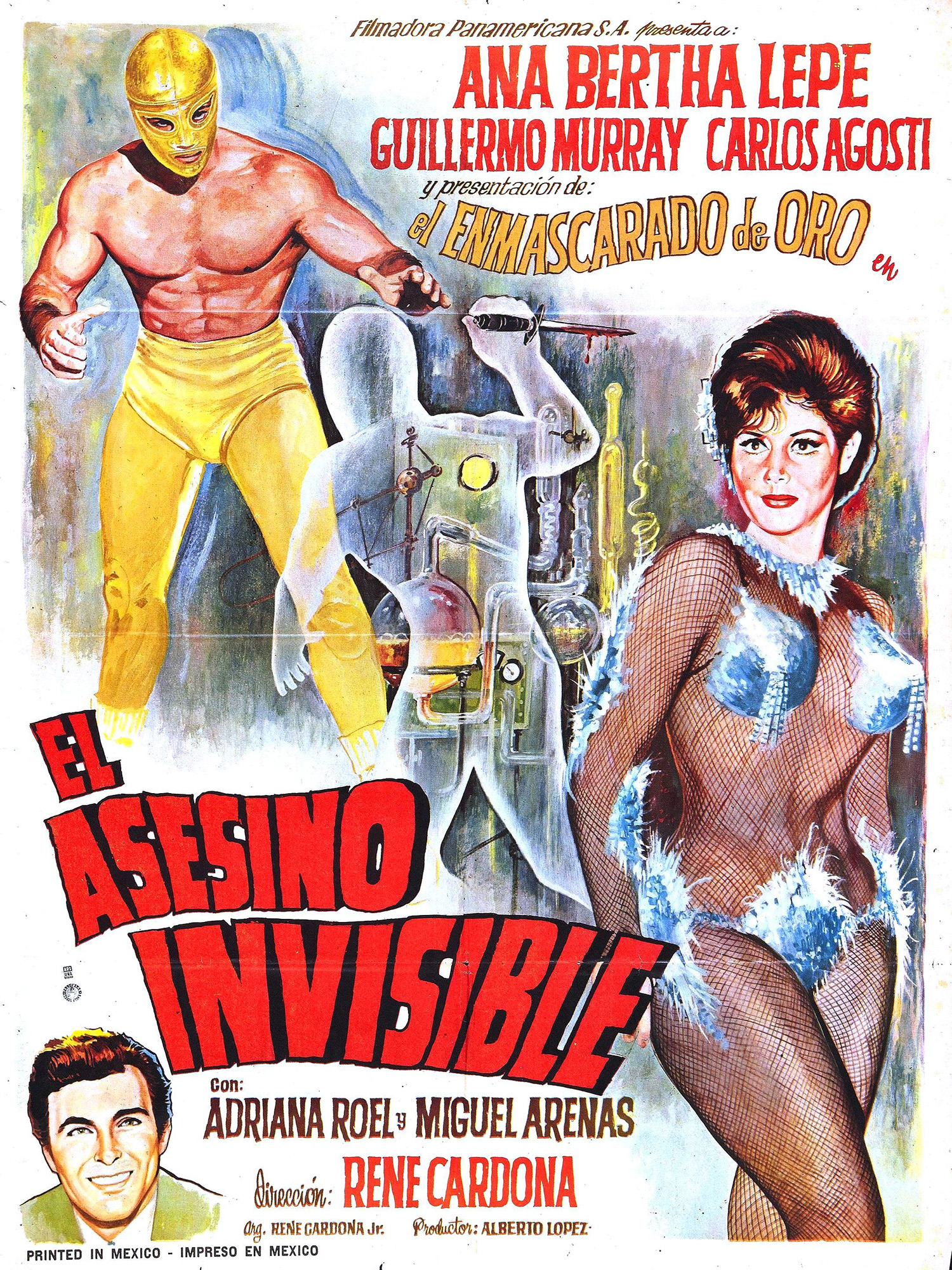 El Asesino Invisible (AKA Neutron Traps the Invisible Killers) was released in Mexico in 1965, featuring those beloved Lucha characters.  As you might imagine, it’s pretty campy and low quality, but a lot of fun. 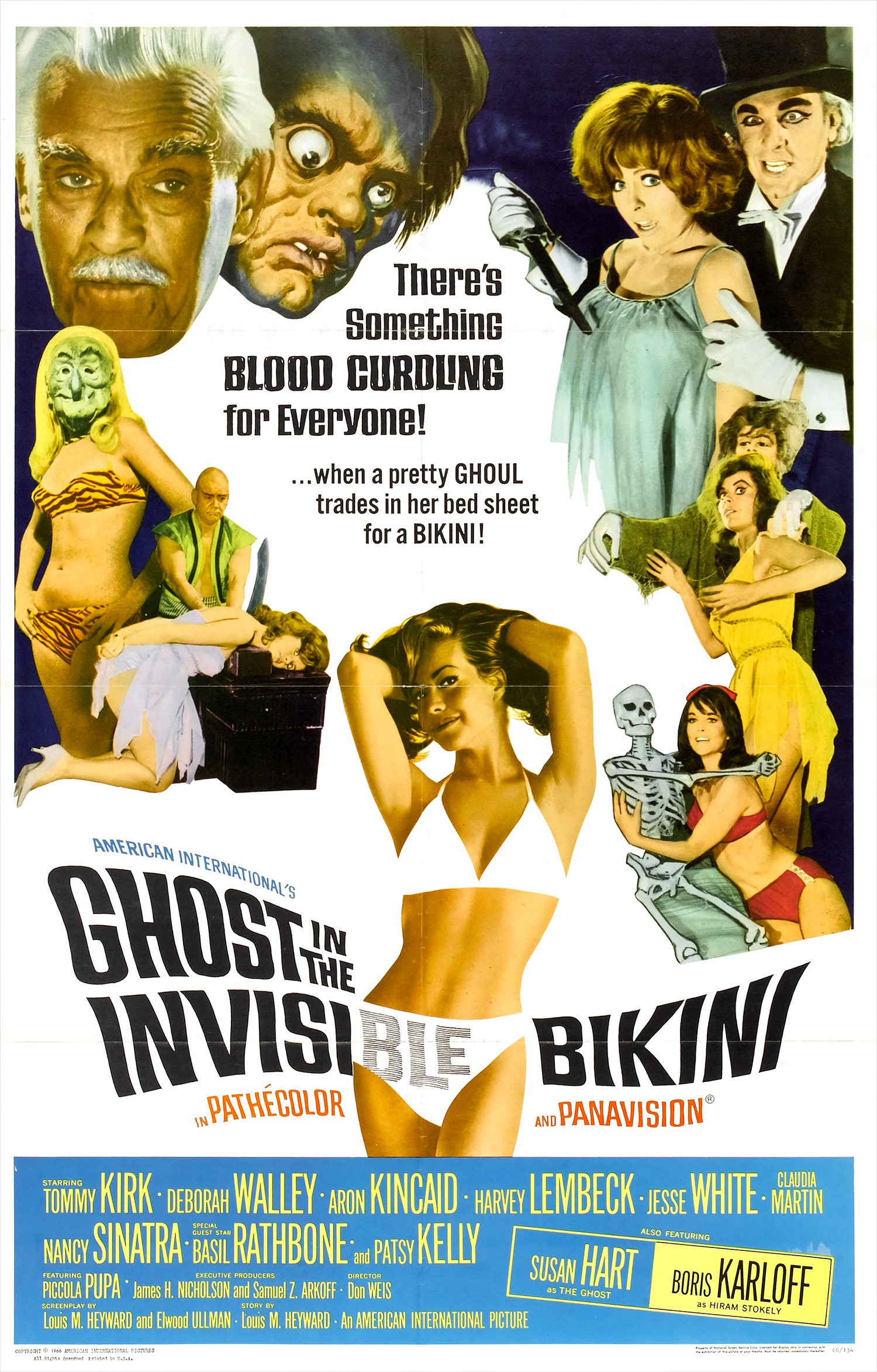 The Ghost in the Invisible Bikini (1966) was the last of the AIP beach party films, and really doesn’t qualify as an Invisible Man movie – as there’s nothing invisible about this film.  Indeed, it’s original working title was “Pajama Party in a Haunted House” which actually made more sense as it actually related to the plot. 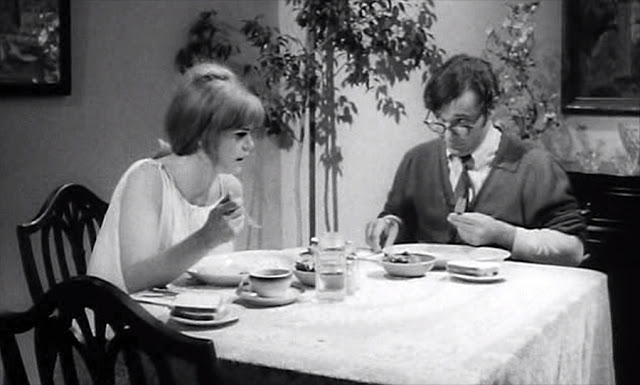 In Henry’s Night In (1969) we find mild-mannered, henpecked Henry using his newfound power of invisibility to perverted ends.  This may be the first time we find the Invisible Man doing what I suppose a lot of guys would actually do with this gift – to watch woman get naked.  Indeed, Henry doesn’t fight Nazis or believe he’s an avenging angel from heaven poisoning the world’s water supply… no, he just watches girls shower.  Henry’s Night In is the perfect segue into the Invisible Man in the sleazy seventies… 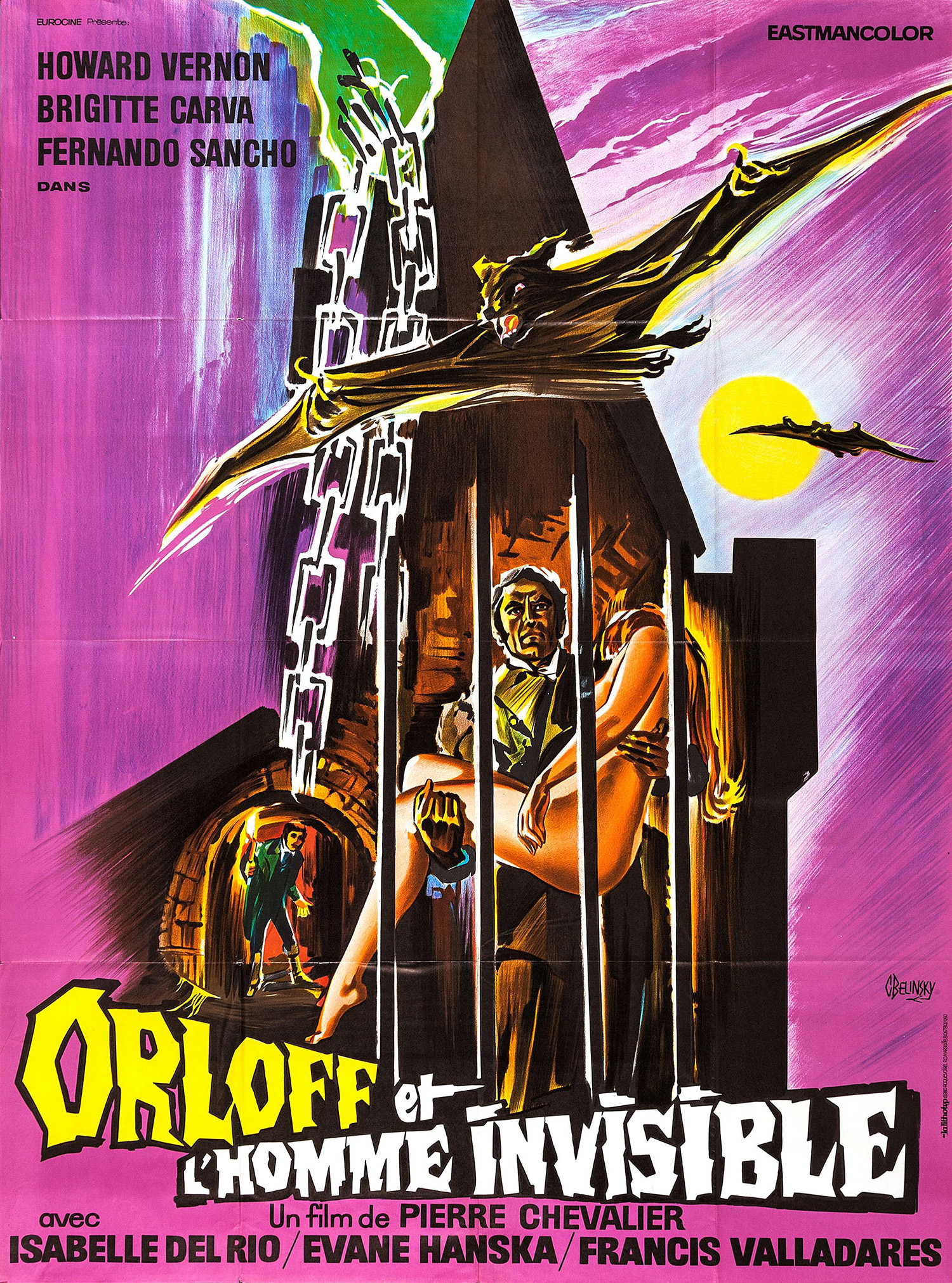 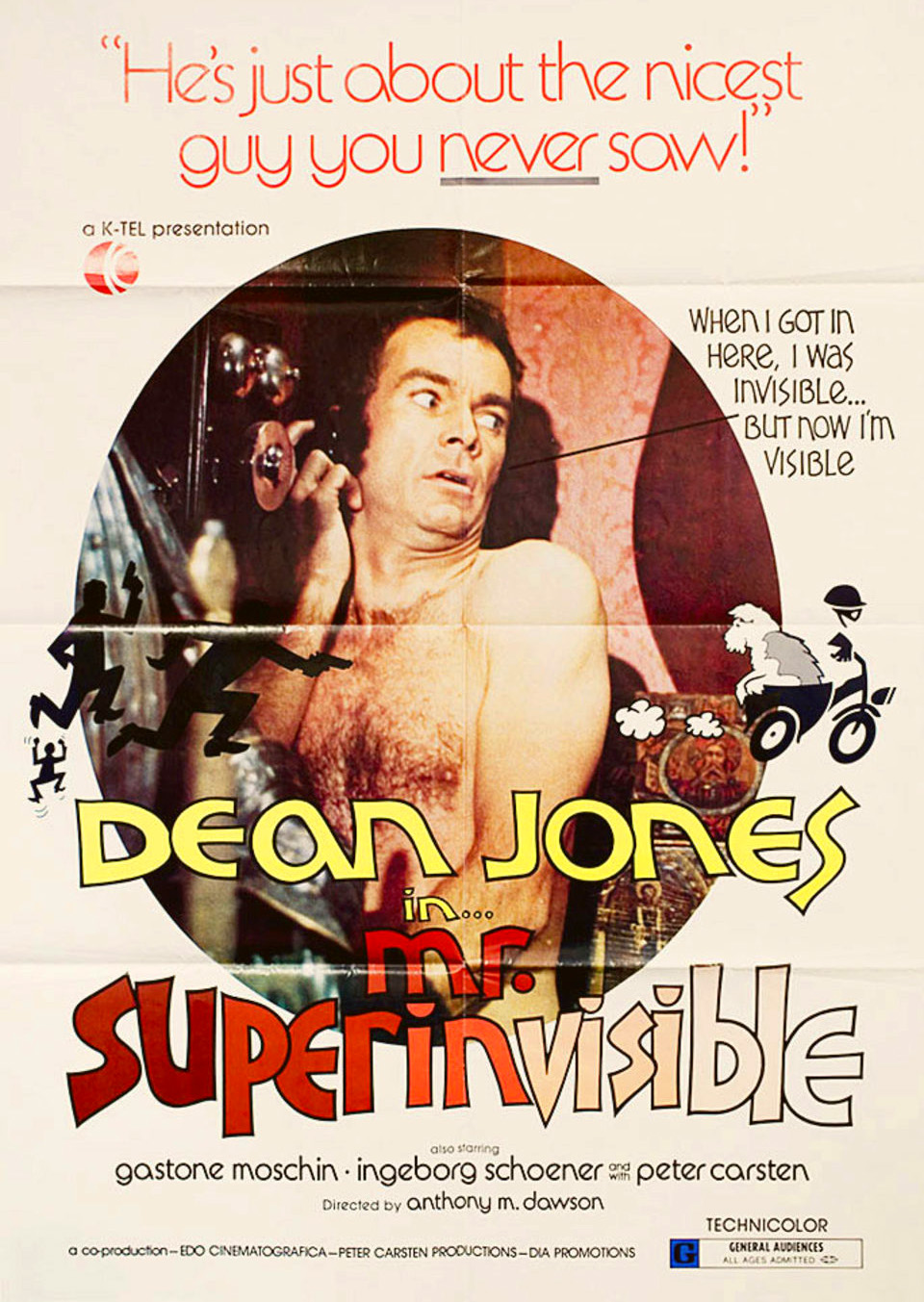 L’inafferrabile invincibile Mr. Invisibile (1970) (AKA Mr. Superinvisible) – a scientist, searching for the cure for the common cold, stumbles upon invisibility.  It was actually a family friendly film, and believe it or not, was a K-Tel production (you know them from their records, but this was their first attempt at movie making).   It was commonly shown in theaters on Saturday or Sunday mornings for kids. 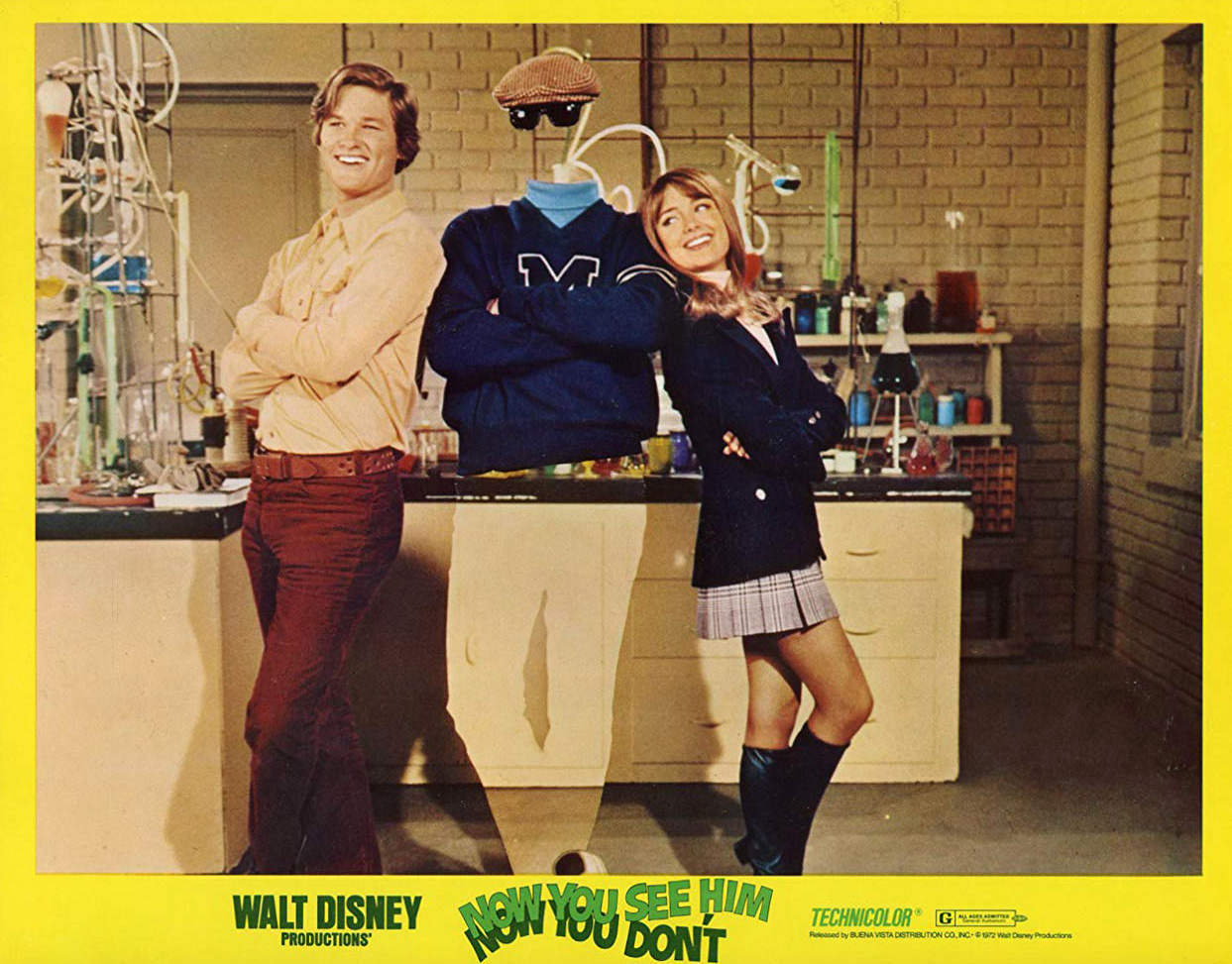 Now You See Him, Now You Don’t (1972) was the second in a trilogy of sci-fi Kurt Russel Disney films. The other two were The Computer Wore Tennis Shoes (1969) and The Strongest Man in the World (1975).  The tagline read: “He’s going… going… gone! See the invisible kid do a fast fade and turn a campus caper into a SIGHT UN-SEEN”.

Lusty Transparent Man (透明人間 犯せ) released in Japan in 1978, may win the award for best Invisible Man movie title, but is otherwise just a forgettable bit of sleaze.  It features a guy who obtains a formula to turn invisible and uses it to spy on women’s bathhouses and rape students. The character clumsily pervs his way like a dirty Jerry Lewis from one voyeuristic entanglement to the next.

In Invisible Strangler (1978) a pathetic dumbass uses psychic ability to turn invisible and kill women; it’s up to uber-suave Robert Foxworth to catch him before he kills again.  It feels like a TV movie or an episode of Columbo; an unwelcome addition to the Invisible Man catalog.

In which the Invisible Man is used for the most trivial stupidity imaginable; it begins to look as though the story may be played out. 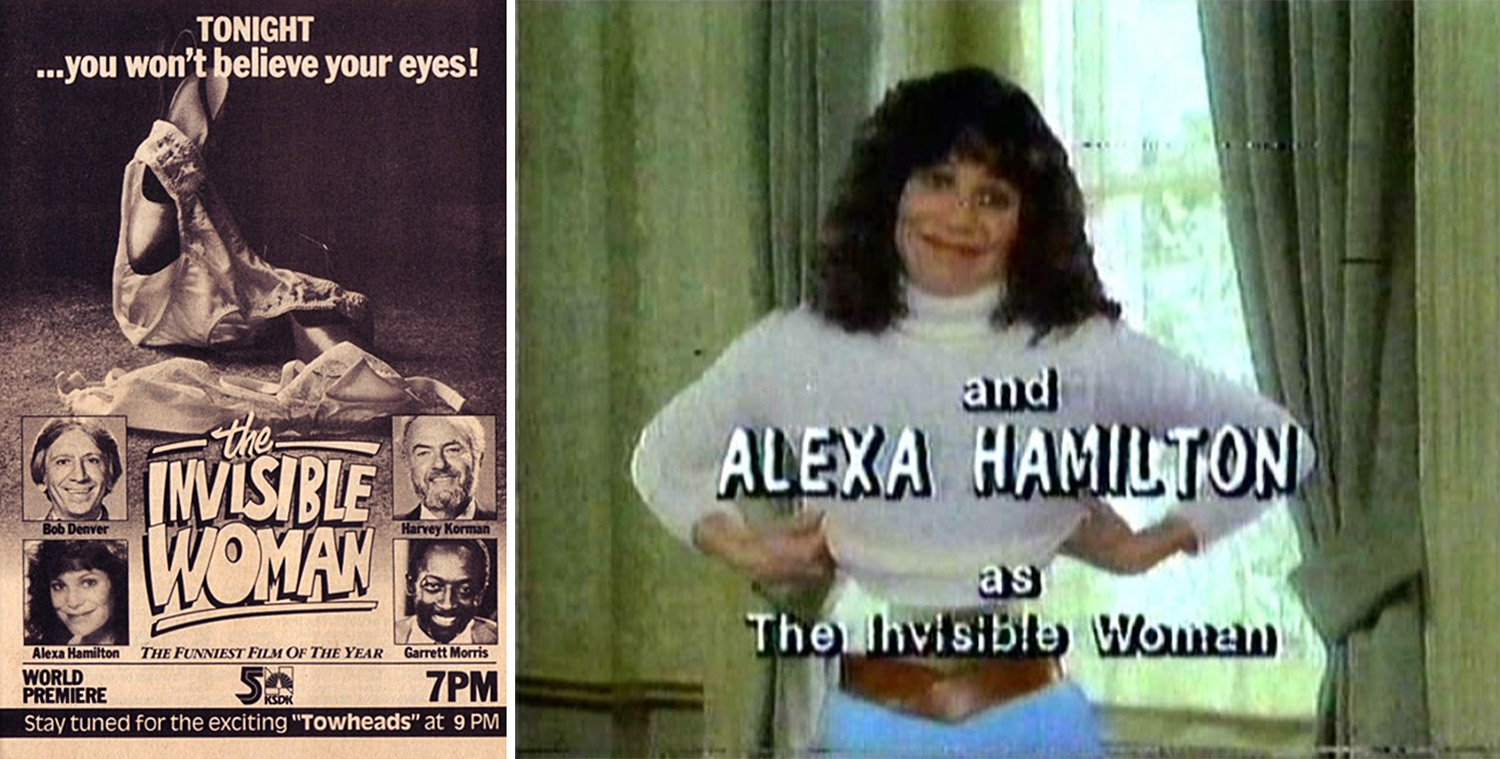 In 1983, The Invisible Woman TV Movie featuring Gilligan (Bob Denver) aired in hopes of it leading to a regular series.  It was terrible and went nowhere. 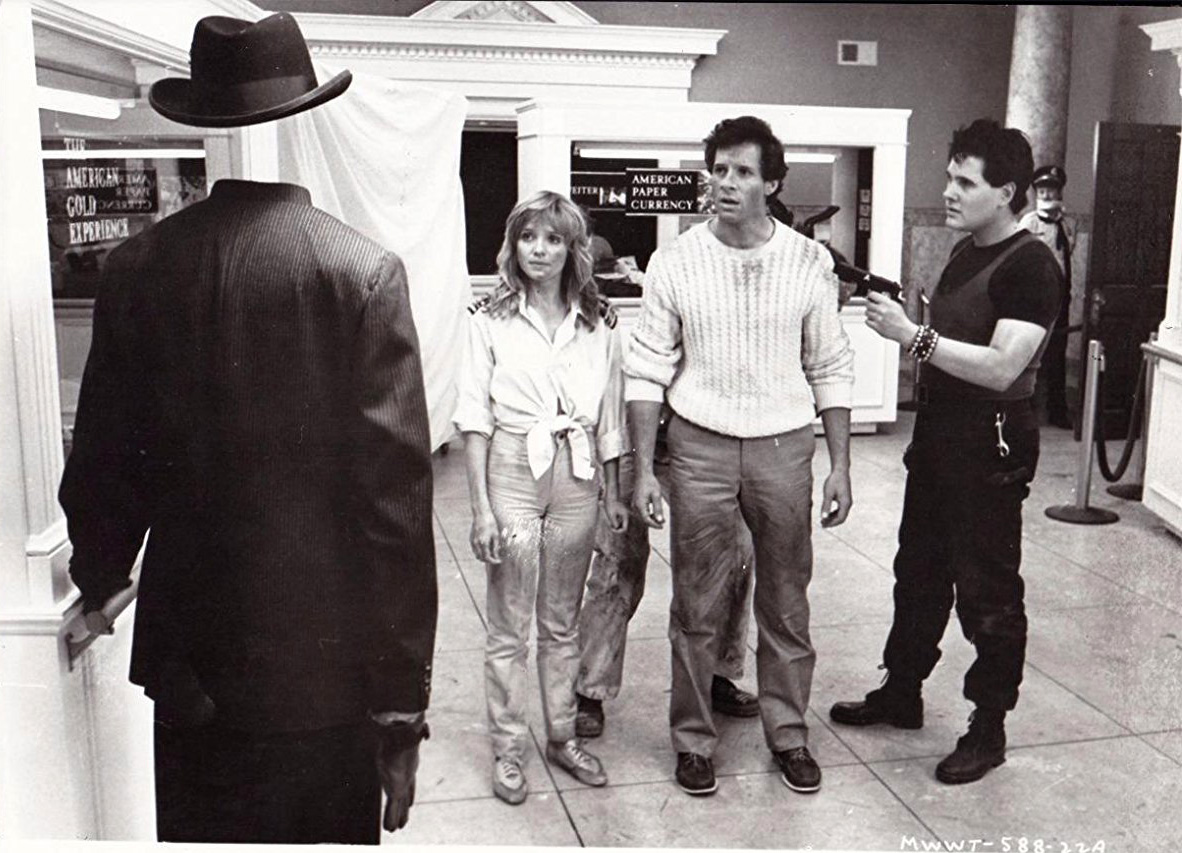 The Man Who Wasn’t There (1983) featured Steve Guttenberg who finds an egg-shaped device with a green fluid inside that makes the person who drinks it invisible.  While profoundly lame, it is notable in that the film was released in 3-D.  (Perhaps the only Invisible Man movie to get the 3-D treatment?) 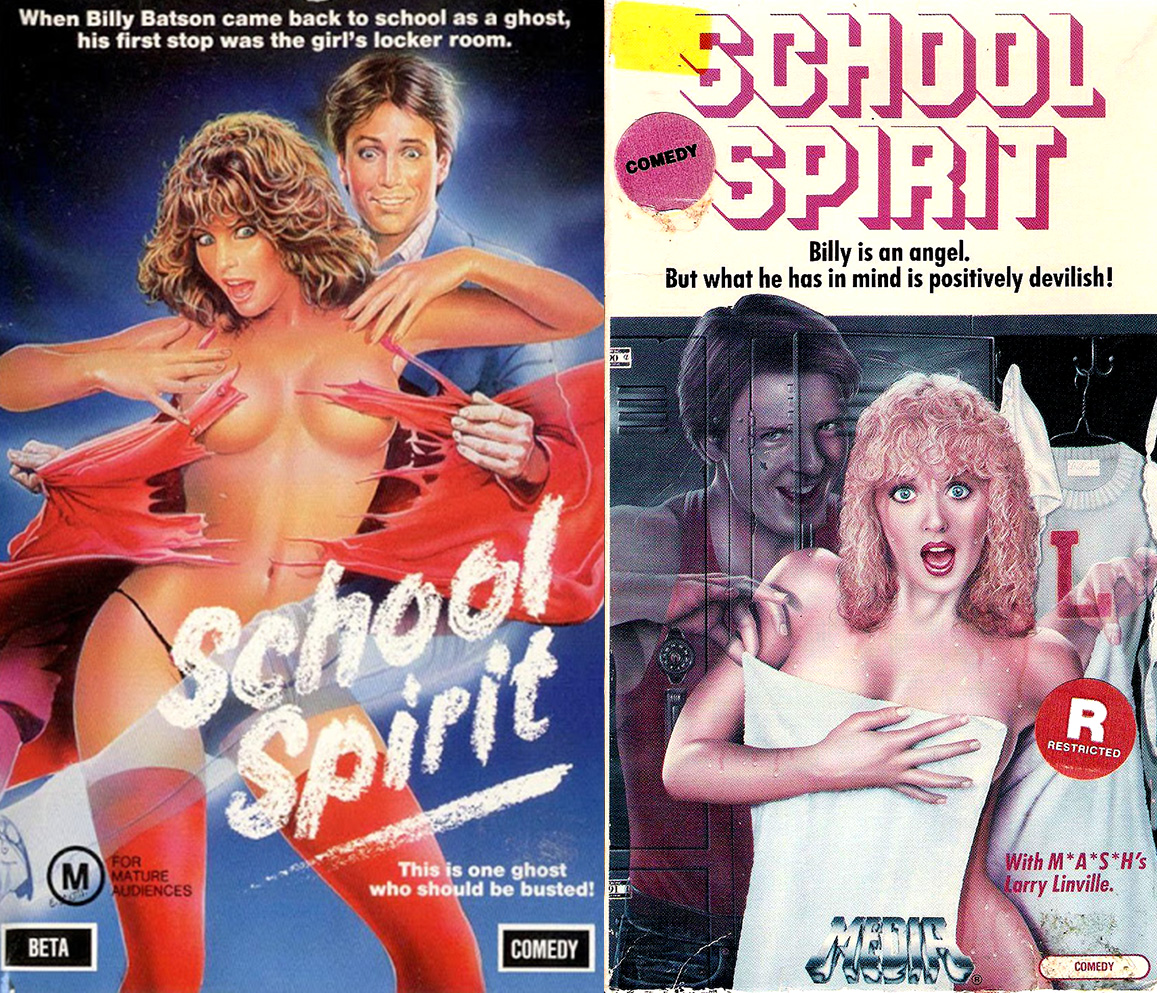 In School Spirit (1985) the protagonist, in search of a condom for a hot date, dies in a car accident. However, he’s allowed to go back to the world of the living – and now has the power to turn invisible.  School Spirit treads the fine line between ghost and Invisible Man – he’s allowed to turn his “ghost powers” on and off, but it amounts to nothing more than Henry’s Night In, where he just watches girls shower and plays pranks on rival schoolmates. 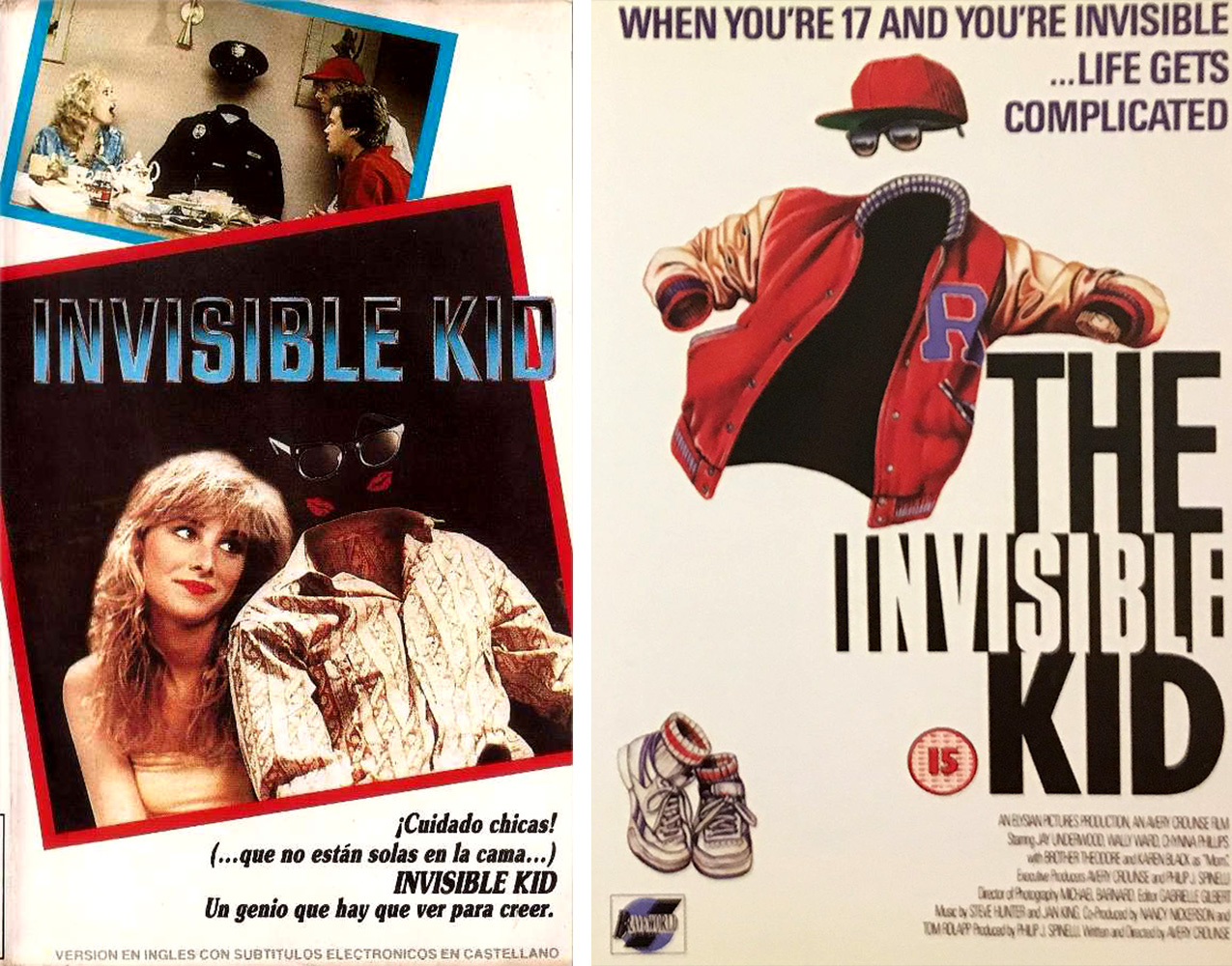 In 1988, we get more of the same with The Invisible Kid.  Once again, the invisibility isn’t quite as profound as in Tolkien and Wells – the kid uses it to watch girls in the shower and get even with bullies.  It’s a pretty crude film, with the high point (or low point, according to your perspective) is when he hides in the principal’s office and lets out a gigantic fart.

Yes, folks, we’ve gone from the mythological Perseus and centuries later reached a point where the invisible person is spying on the girls’ locker room and cutting farts for laughs.  Perhaps the Invisible Man theme has finally reached rock bottom and put out of its misery?… 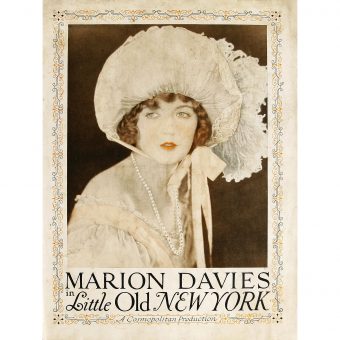