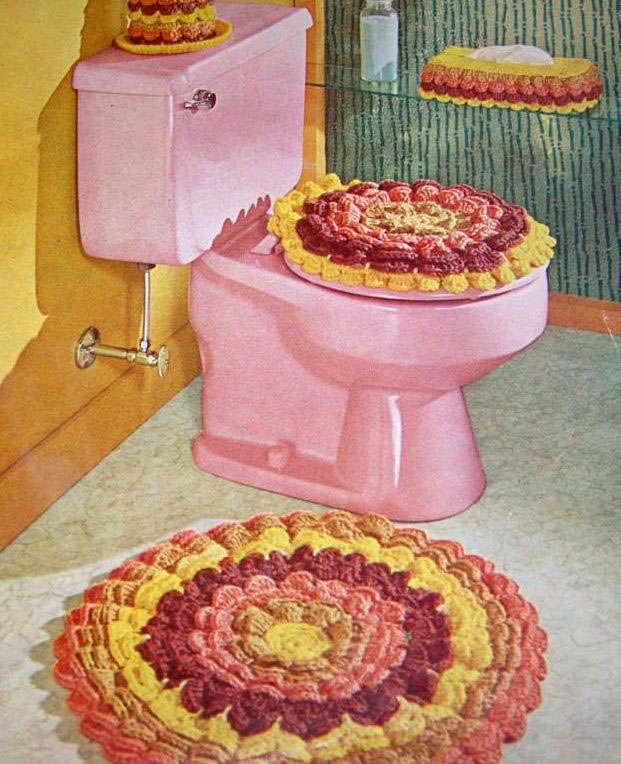 TODAY, bathroom décor is so sterile and uninviting; whereas, back in the 1960s and 70s it was place of fun colors and whimsical decorations… and, yes, things did get a little weird. Take for instance, the bathroom pictured above – it looks like a delectable cake. For a moment, it seems like an inviting little birthday party and I forget that this is a place meant for pooping. 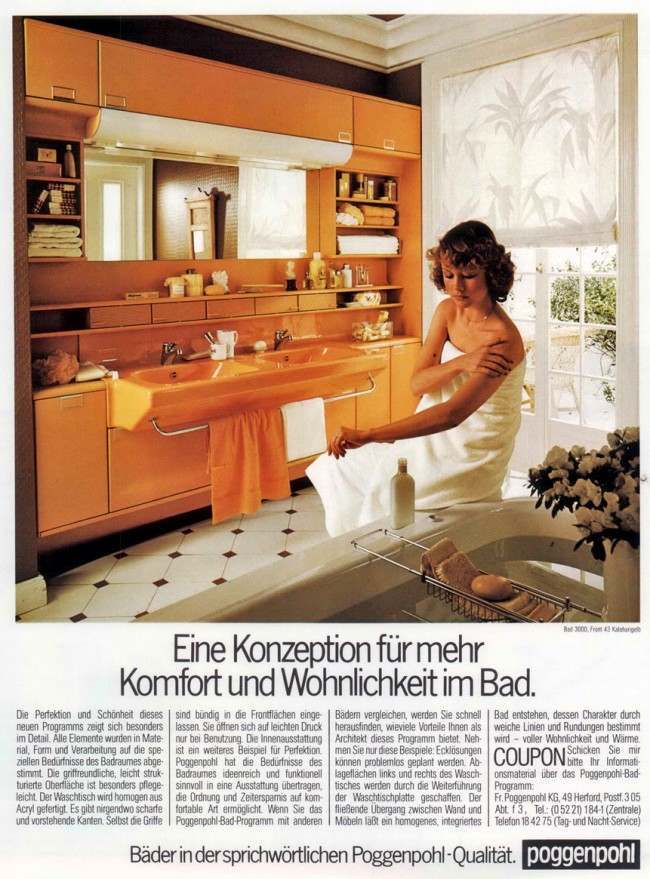 Who wouldn’t love a sherbet orange bathroom? I’ve mentioned this on several occasions: the colors of the 1970s were: Avocado Green, Harvest Yellow, Burnt Orange, and Brown. Some variations existed, such as replacing Mustard Yellow for Harvest Yellow, but the hallowed color palette of the Seventies was largely unbreakable. And it loud as these colors seem, they were actually calmer than the mod colors of the previous decade. 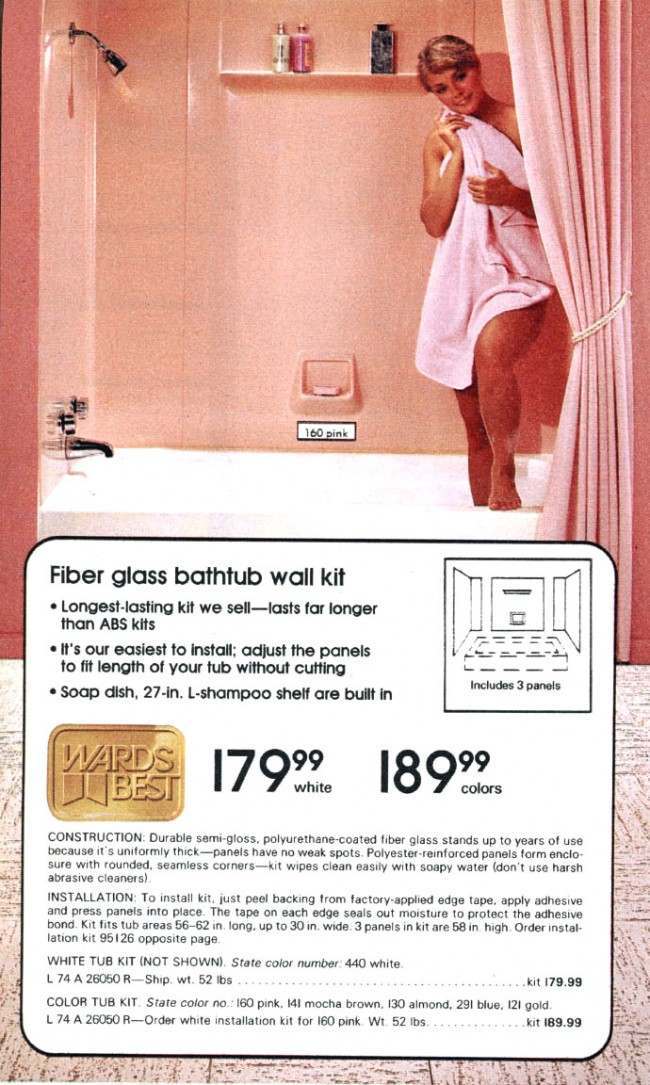 This catalog page comes from 1982. By then, the colors of the 70s had been jettisoned in favor of pastels. Goodbye earth tones, hello Miami Vice. 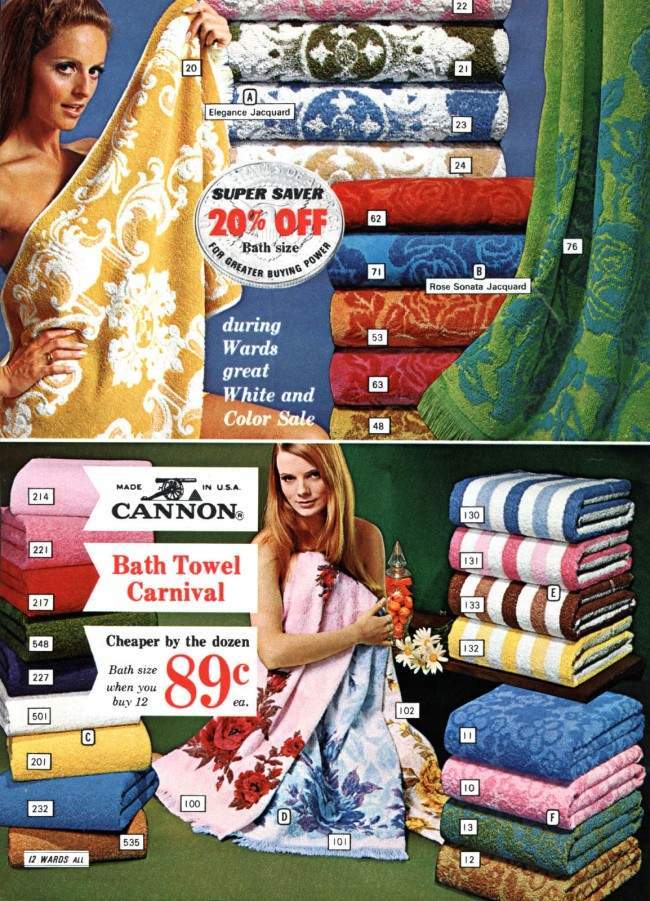 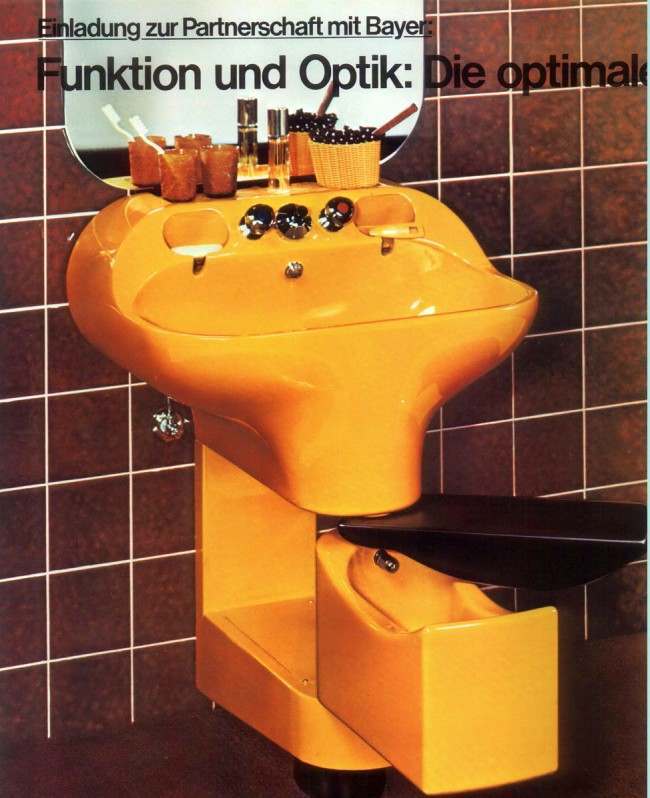 Could some kind reader please explain what the hell this detachable base thingy is? Is this so that I can urinate while I brush my teeth? Inquiring minds want to know. 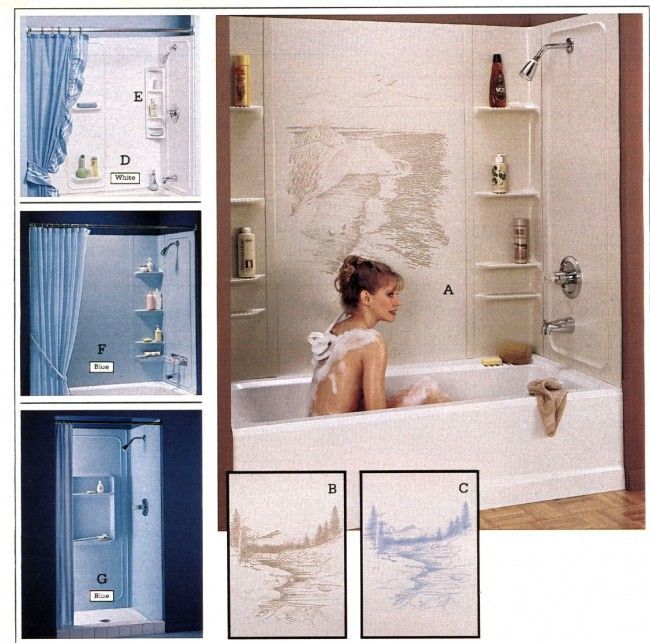 This 1983 shower wall looks like a disgusting patch of mildew, until you realize it’s just a ill-advised mural. I’d also like to point out something that all bathroom catalog pages had in common: without exception, there’s a chick in the picture and never a guy. 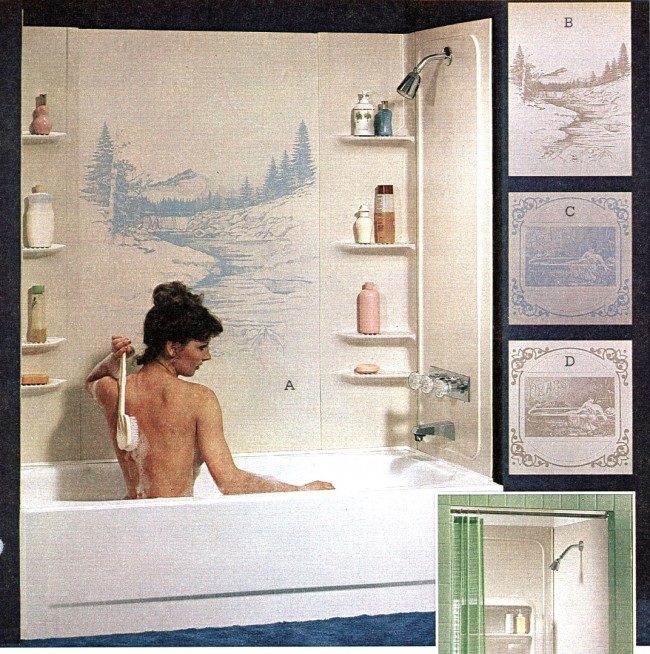 Can your mind even comprehend for a moment if, instead, this was a big hairy man in the bathtub washing his back? Not only would nobody buy this product, but the catalog itself would be discarded or burned, forever a painful memory for those unlucky enough to have gazed upon its pages. 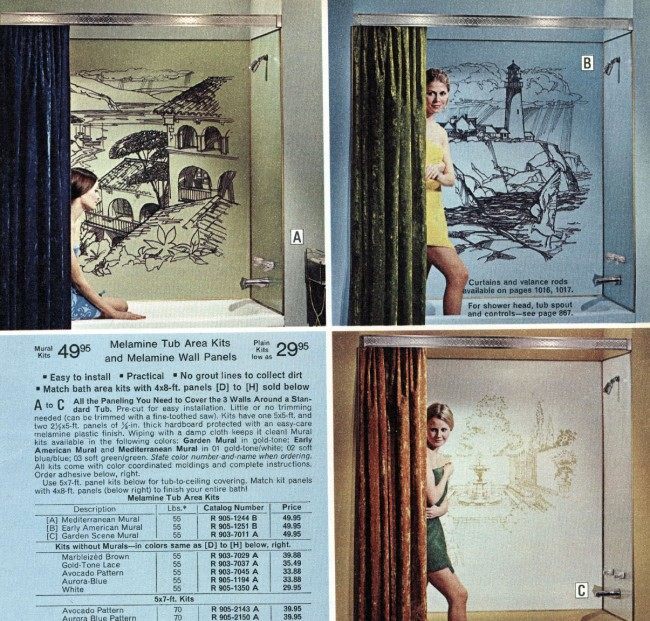 More shower wall murals. At least these aren’t as easily confused with patches of deadly black mold. Regardless of whether it’s recognizable as art or fungus, it would still be considered the height of tackiness for a bathroom of today. As I stated at the outset, bathrooms are supposed to be sterile and coldly unwelcoming. 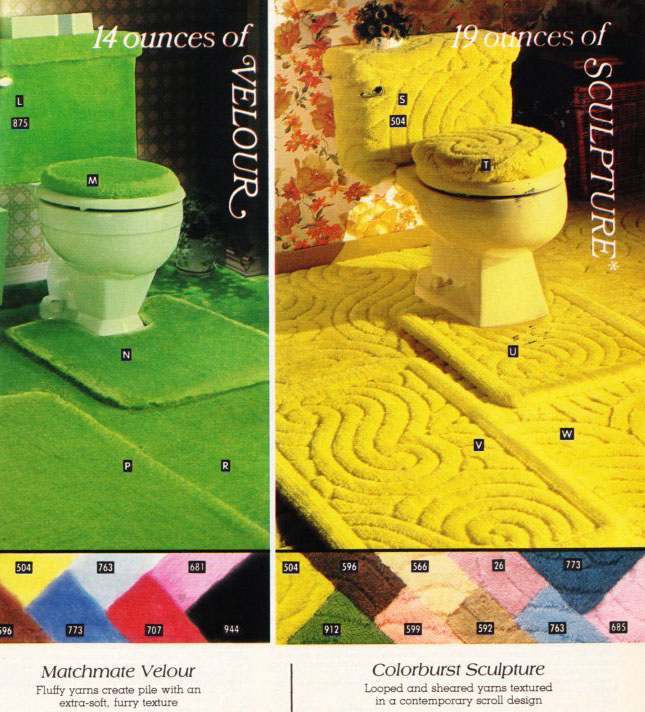 Thick velour padding for a bathroom probably seemed like a great idea at the time. However, all it takes is one houseguest with an unruly urine stream to come along and turn your velour palace into an unsanitary hellhole. Lush carpeting is maybe not the best idea for place of frequent pooping…. 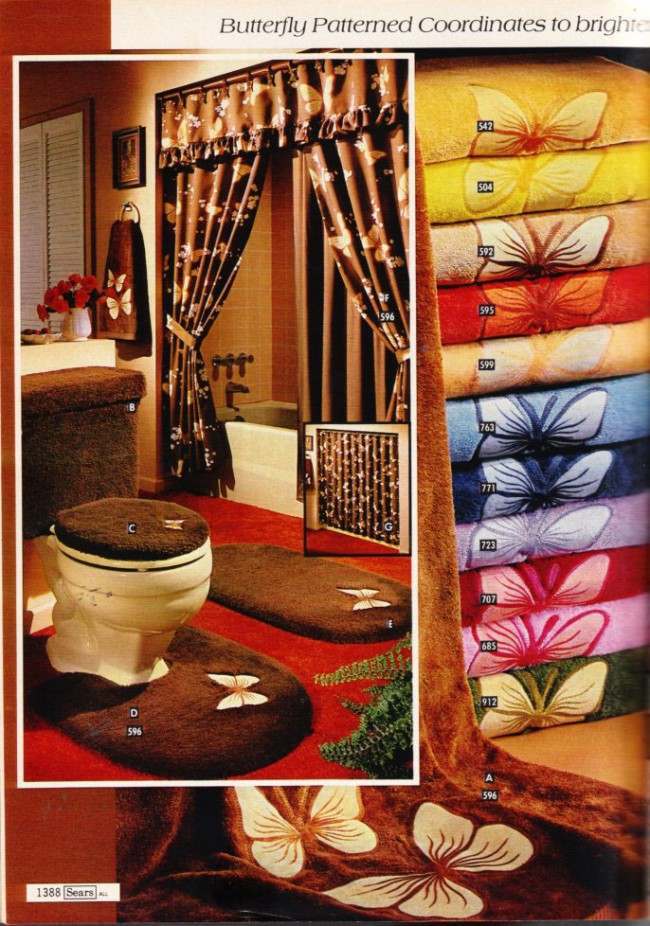 ….unless, of course, your bathroom is carpeted doo-doo brown. This doesn’t solve the odor and inherent uncleanliness, but it’s a brilliant solution nonetheless. 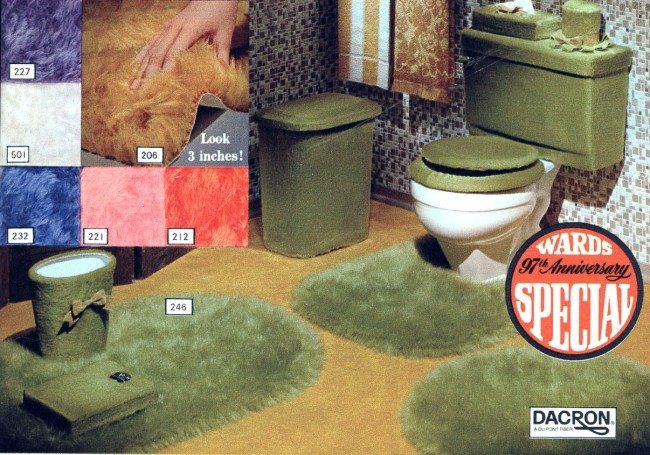 “Look 3 inches!” When I said the bathroom carpeting of the 70s was lush, I meant it. I’m sure the dense canopies of Dacron were thriving ecosystems of E. Coli and fungi living in symbiotic harmony. 1970s bathrooms should have been declared protected nature preserves. 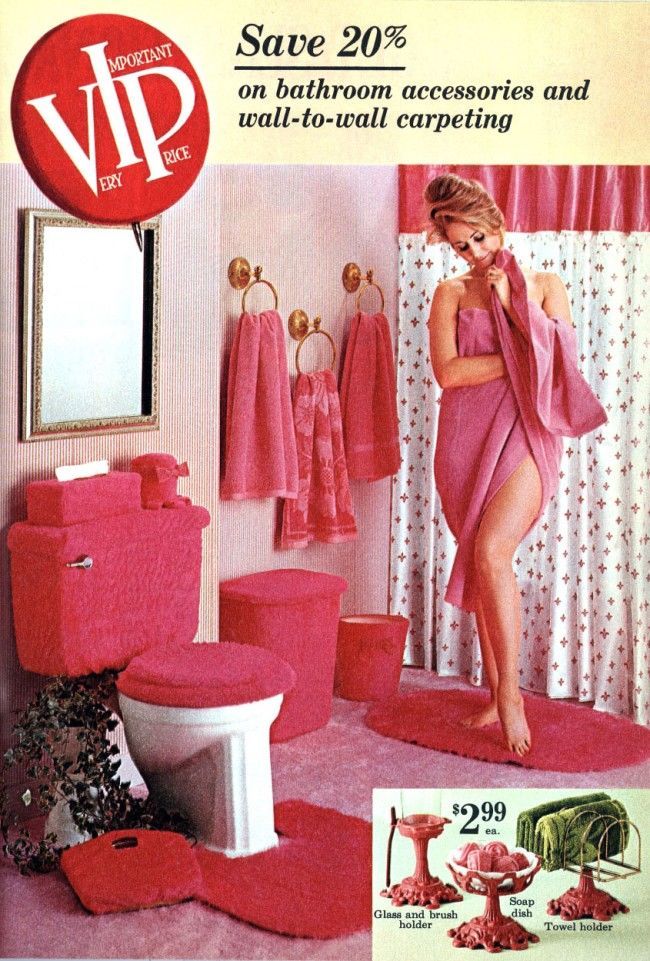 The text for this 1970 catalog page states that “VIP” stands for “Very Important Price”. However, I think “Vision Impairing Pink” seems more apt. 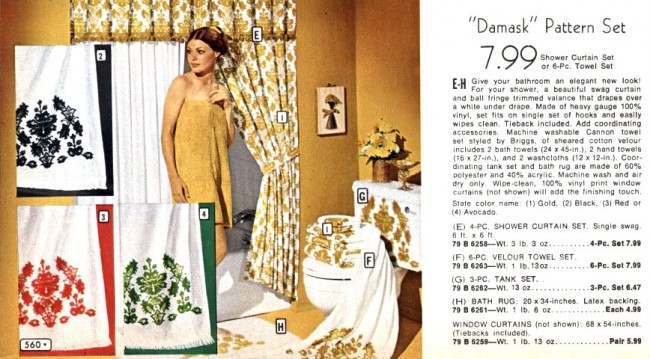 Is it just me, or does she look a little concerned that there’s an intruder in the house? “What’s that noise? I thought I heard something down the hall. Probably just the cat….” 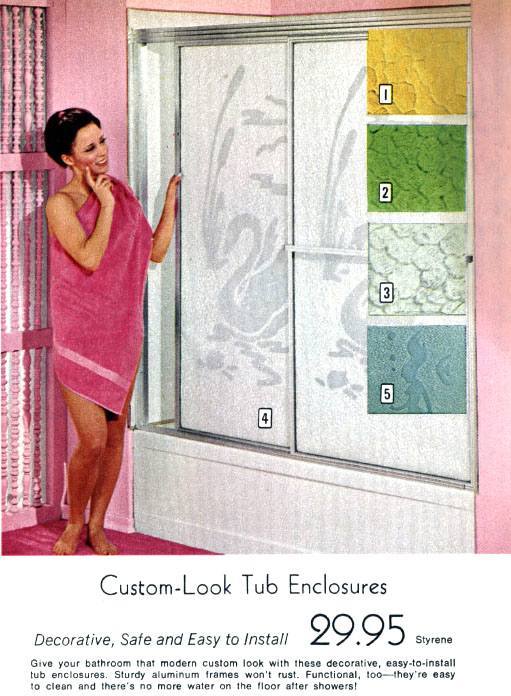 Choose from a variety of enclosure styles, all resembling close-ups of chronic skin conditions. On sale now – Psoriasis Yellow– while supplies last! 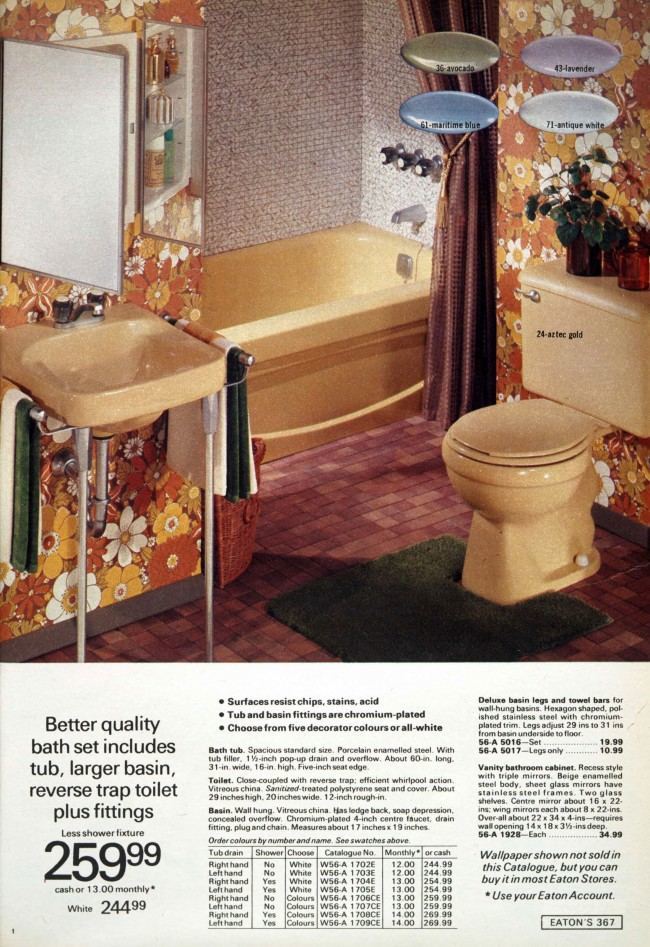 And finally, it just wouldn’t be right to go on about retro bathrooms and not mention the wallpaper. Say what you will about 1970s tastes, it can never be accused of being plain.