Being able to see the person on a call is something we take for granted. Skype, FaceTime, video conference software and similar applications are just a routine part of modern life.  However, once upon a time, the idea of a “video phone” was pure science fiction.  The notion that we could actually SEE the person on the other end of the call was something from The Jetsons, not reality. 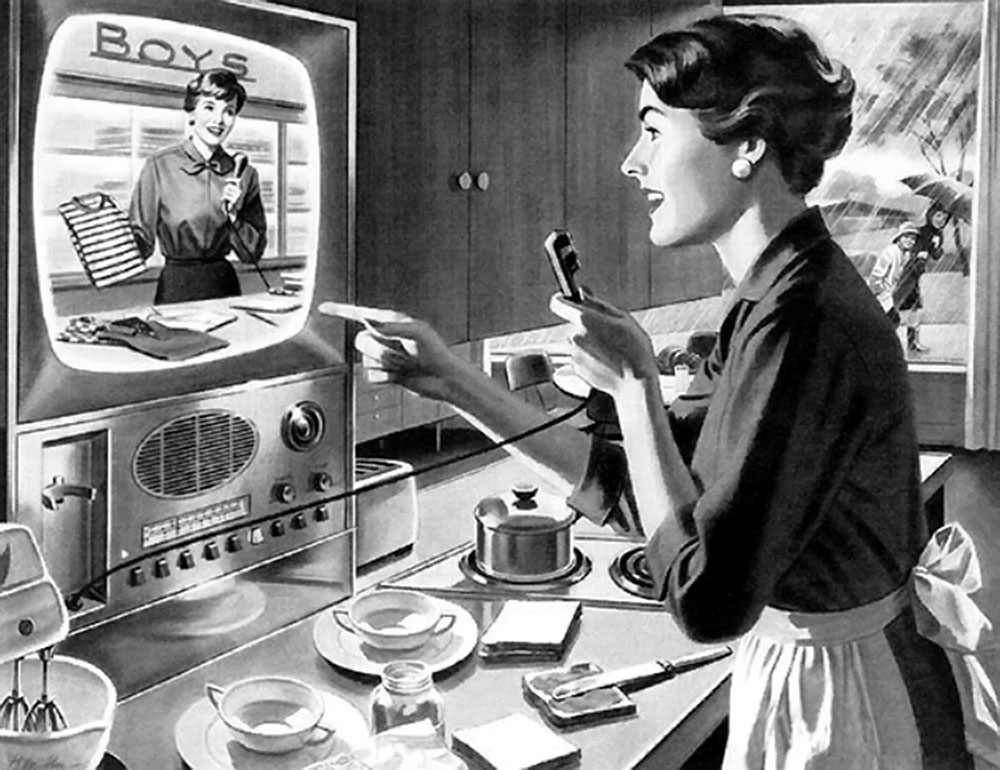 But the idea was so compelling, and a clear example of “space age technology” if there ever was one, that AT&T decided to embark on a quest to invent one.  It started with such optimism, but would lead to decades of disappointment. Sheldon Hochheiser, AT&T’s corporate historian, calls the videophone ”the most famous failure in the history of the Bell system.”

1. THE WORLD’S FAIR- THE PICTUREPHONE IS UNVEILED 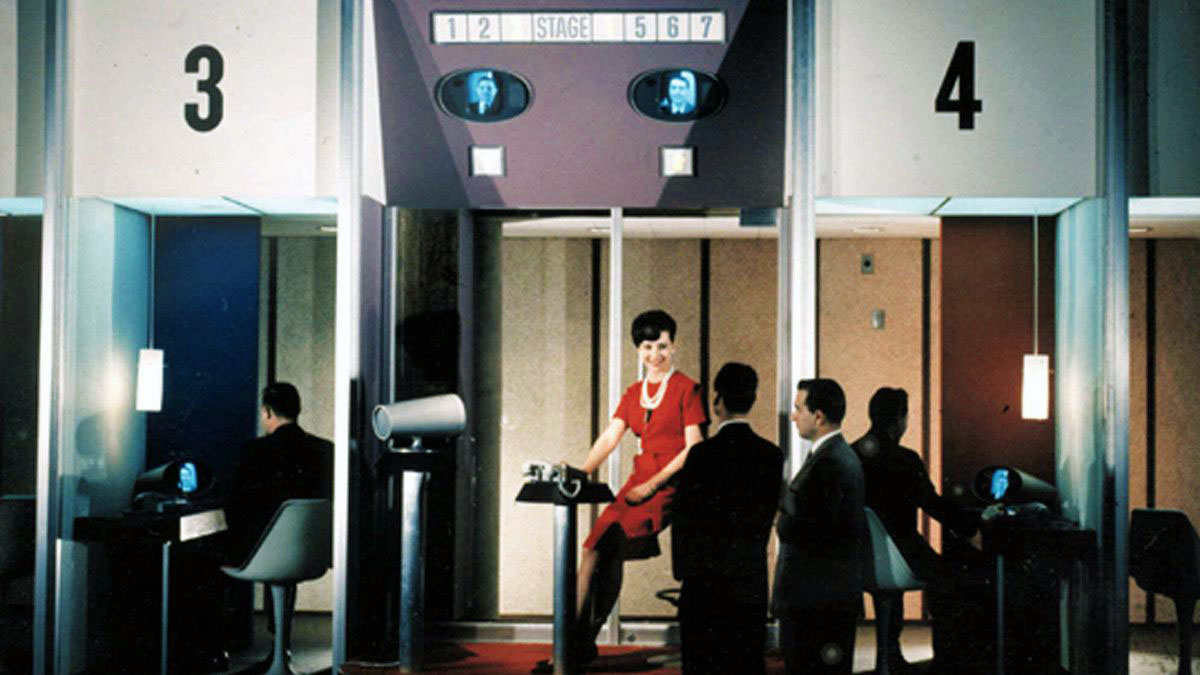 In 1964, at the World’s Fair in Queens, Bell’s MOD I (Model I) Picturephone was unveiled.  People lined up to enter “Picturephone booths” to make calls to a corresponding exhibit at Disneyland.  First Lady Ladybird Johnson even stopped by to try it out. 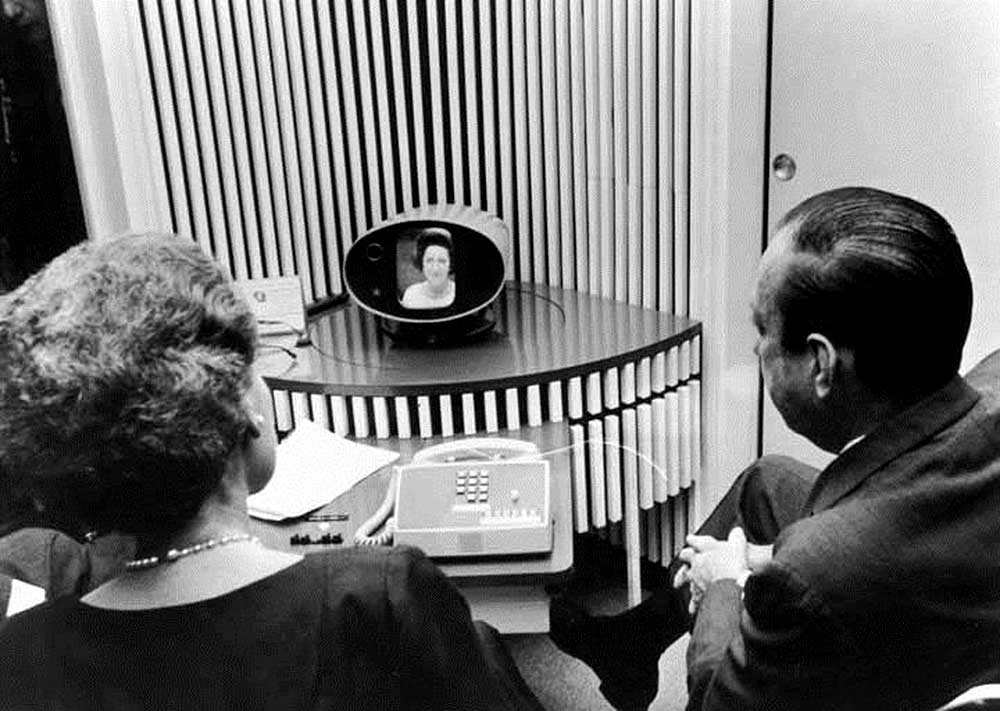 The trouble was it was insanely expensive. A 15 minute video call would cost about $600 (adjusted for inflation).  So, it wasn’t exactly an instant success.

2. THE SIXTIES – THE PICTUREPHONE CAPTURES OUR IMAGINATION

Despite its high price tag, the idea of a picturephone was so compelling that it never left the public imagination.  Stanley Kubrick featured it in a scene in his 2001:A Space Odyssey.

The video phone in an attaché case made numerous appearances in pop culture: 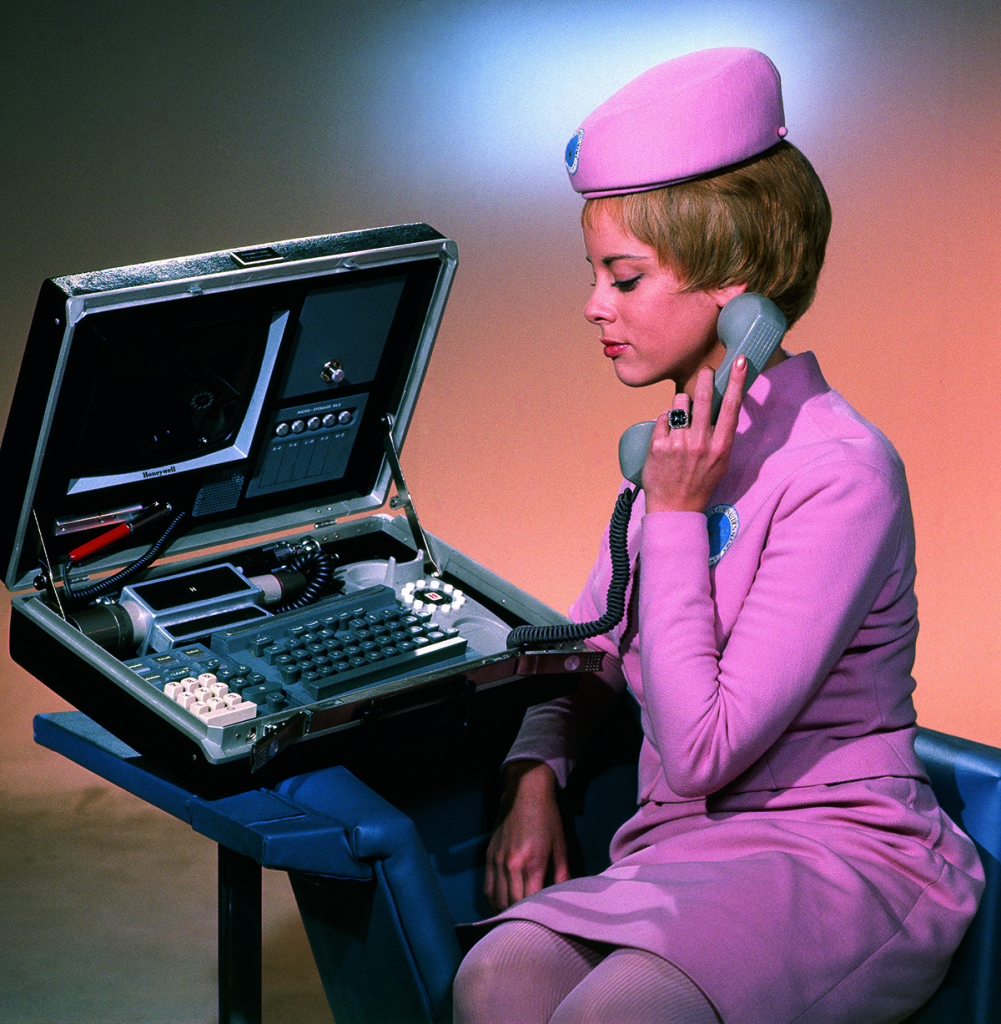 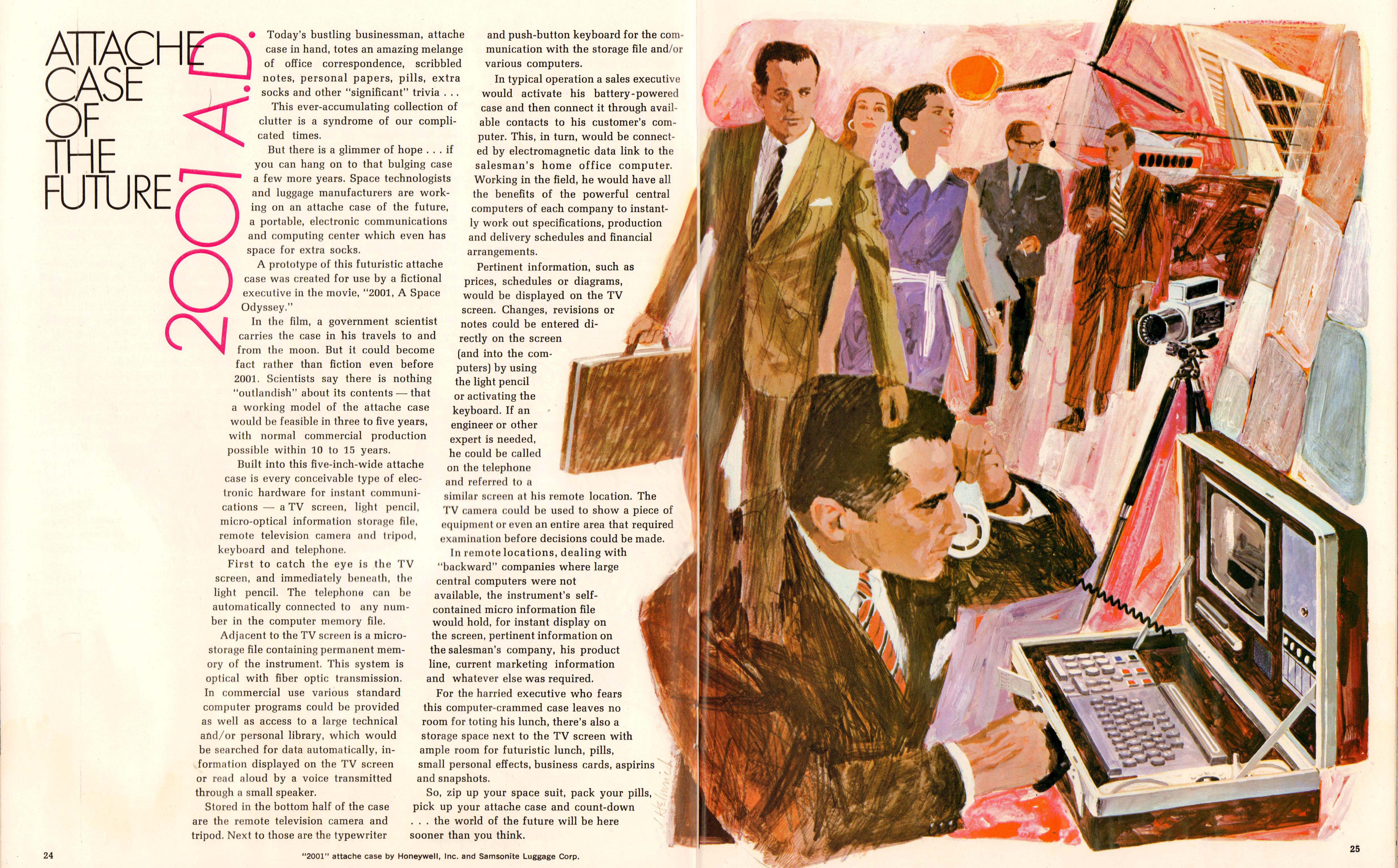 This “article” (sponsored by Samsonite luggage) promises that video phones in our briefcase is just five or so years away. 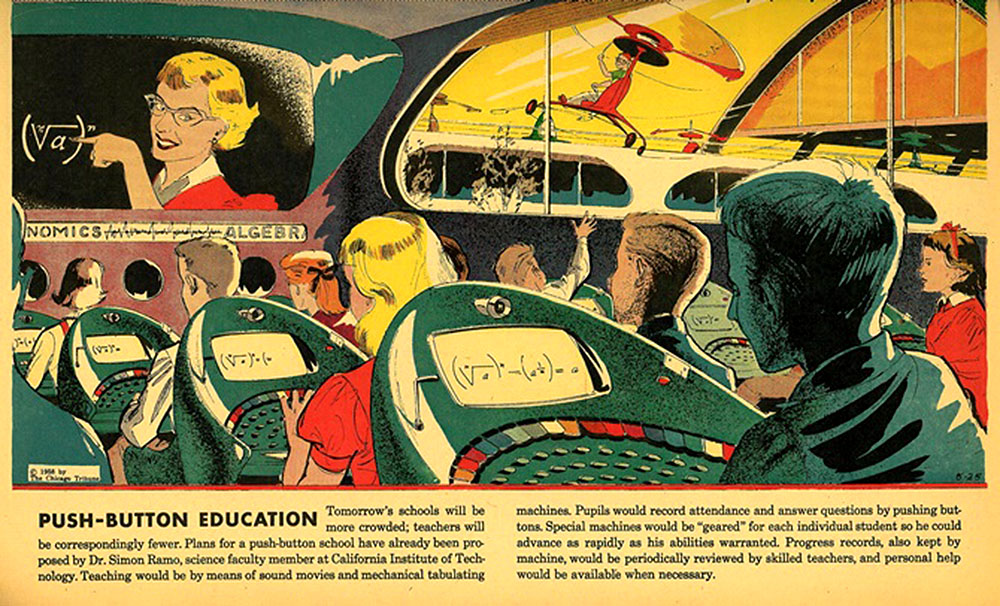 Imagine the possibilities!  The potential of the video phone seemed limitless.  We could have a teacher on the video screen interacting with students from far away! 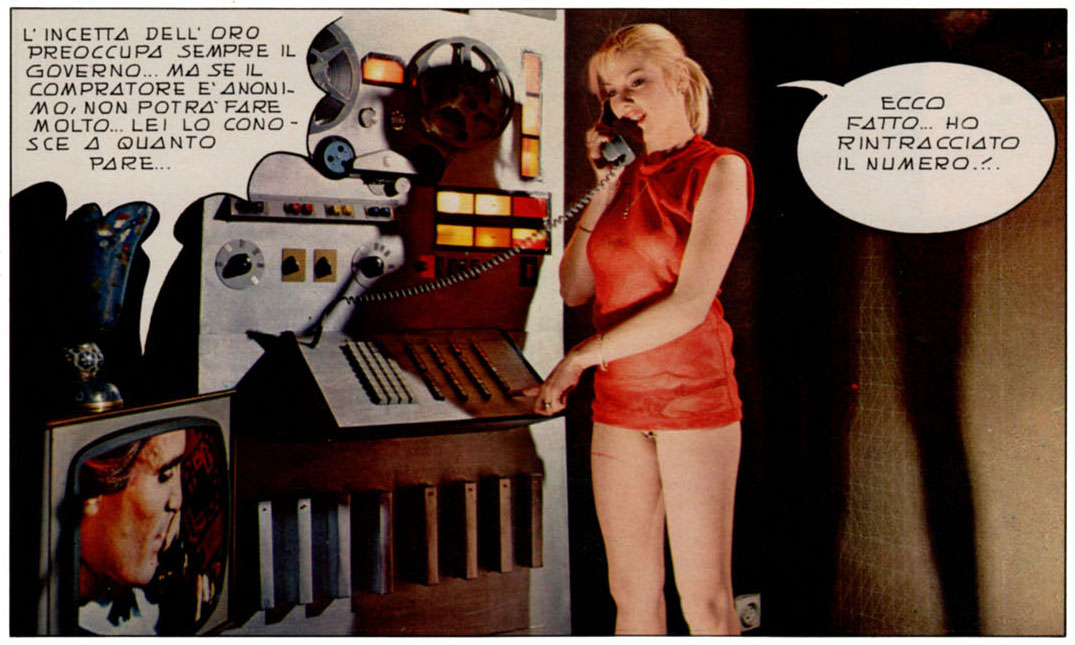 No self-respecting spy organization or secret service would be without the video phone.

(L) The video phone was a fixture on The Jetsons, appearing in episodes pre-dating the historic World’s Fair. (R) Popular Science and similar magazines regularly tantalized readers with the possibility of video telephony. 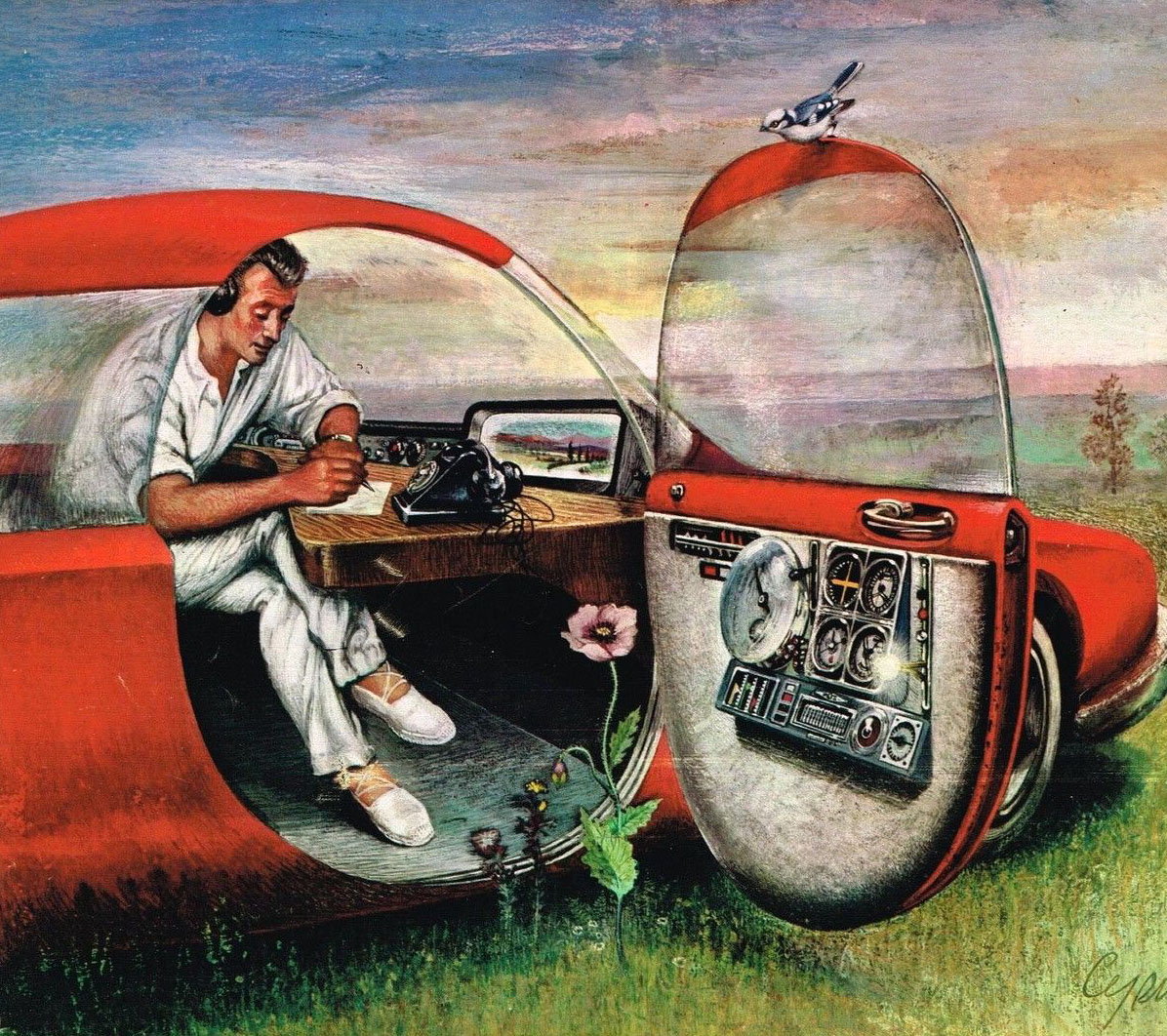 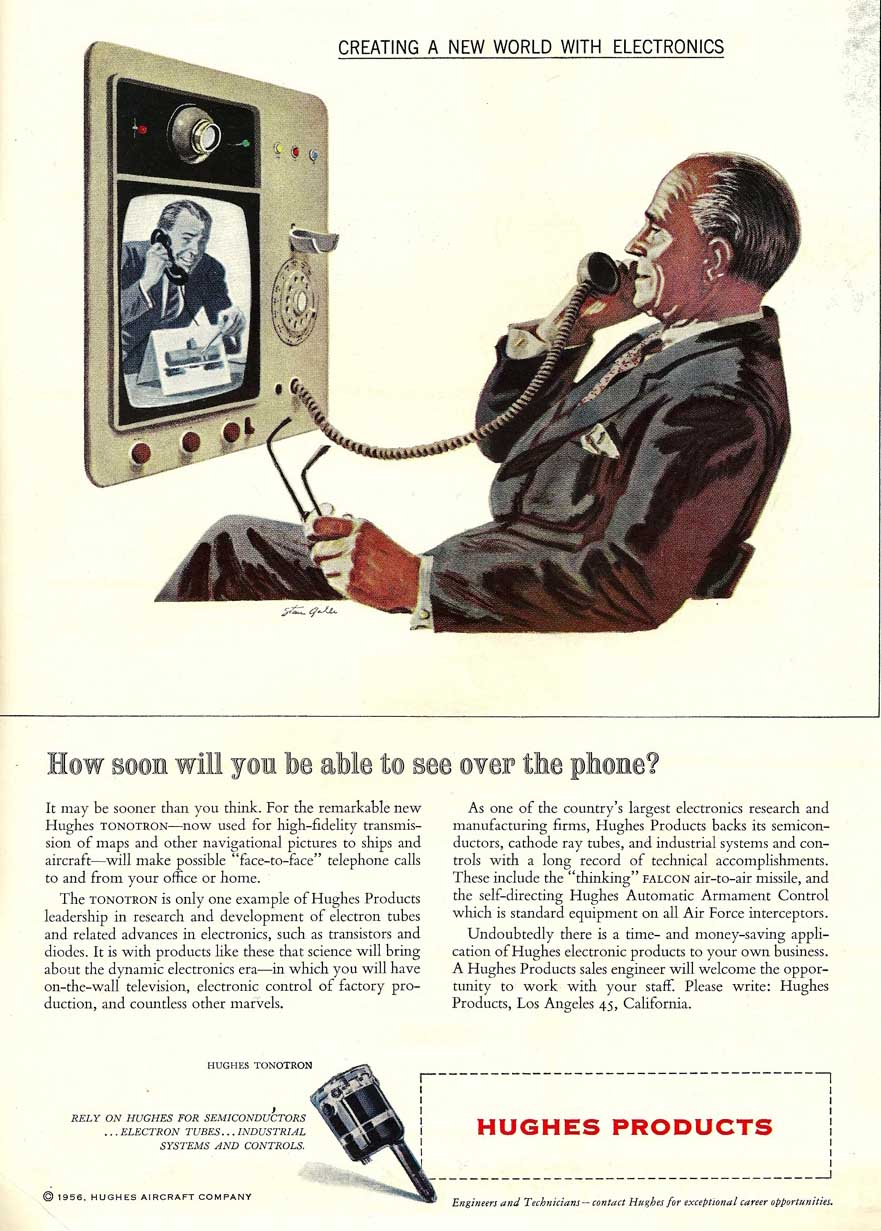 As this ad from a 1957 issue of Scientific American demonstrated, AT&T wasn’t the first to be lured by the possibilities of a picture phone – but they were the ones who seriously took up the challenge.

Between 1966 and 1973, AT&T sunk 500 million dollars into developing a functional and affordable Picturephone, but it was not to be.  In fact, it’s often cited as a textbook example of when a company should have thrown in the towel, rather than continuing to throw more money at a lost cause.  (See Cautionary Tale; The Perpetual Next Big Thing by Lisa Guernsey, The New York Times, April 14, 2000). 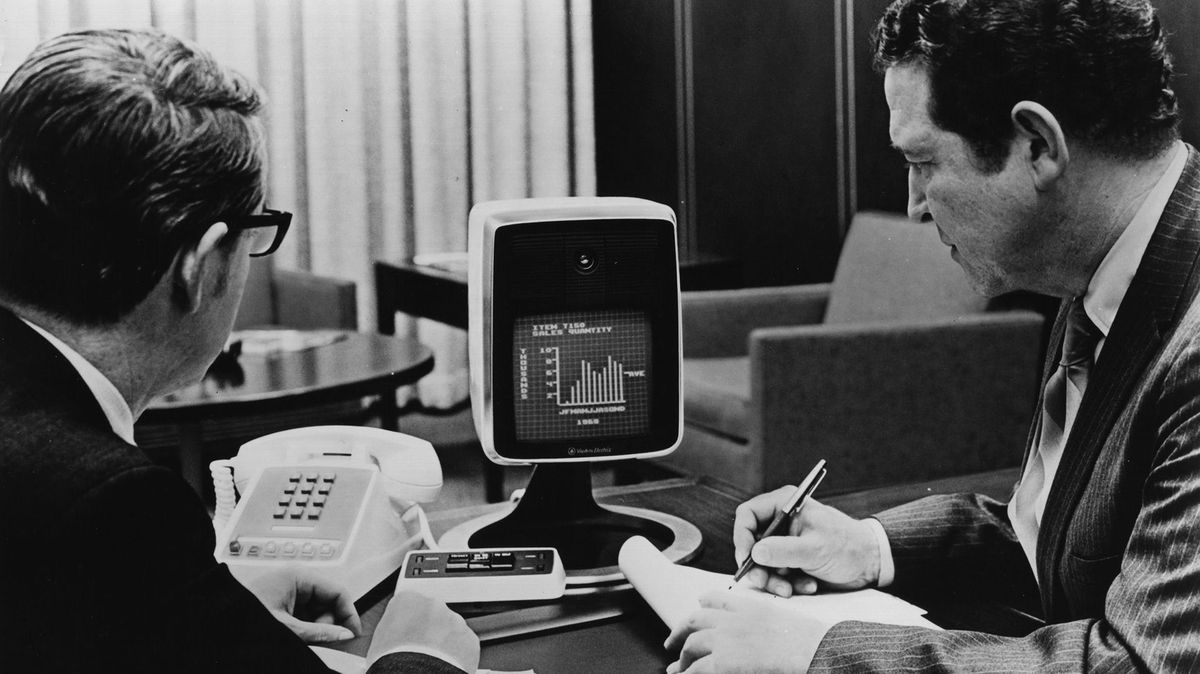 They attributed the failure to three causes: (1) It was way out of the price range for most people, (2) In order for a video phone to make sense, it required that both parties are using one, and (3) it wasn’t clear that people really wanted to be on video when they made calls in the first place. 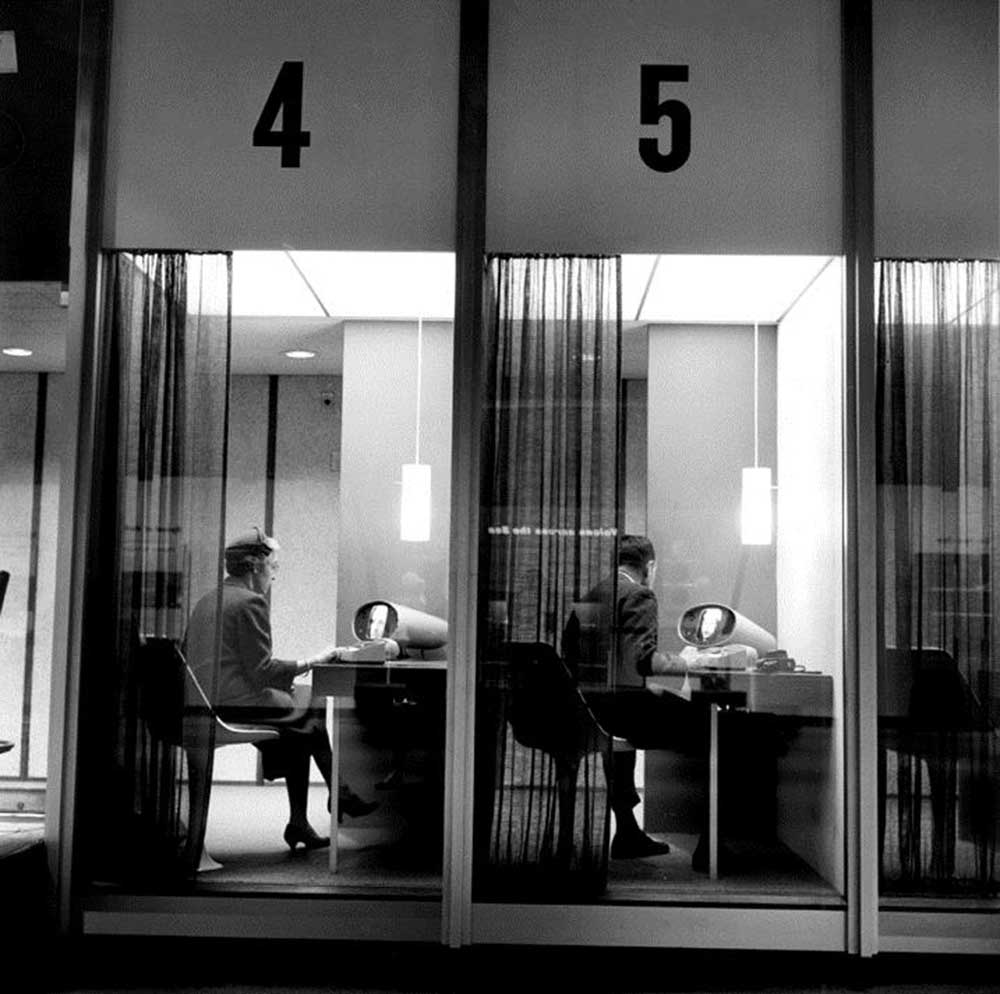 AT&T even opened public Picturephone rooms in New York, Chicago, and Washington DC.  Rooms could be rented at rates from $16 to $27 for the first three minutes of conversation.  Unfortunately, just 71 calls were made in the first six months and it was downhill from there. While the rooms remained through 1970, not a single call was made in the final year. 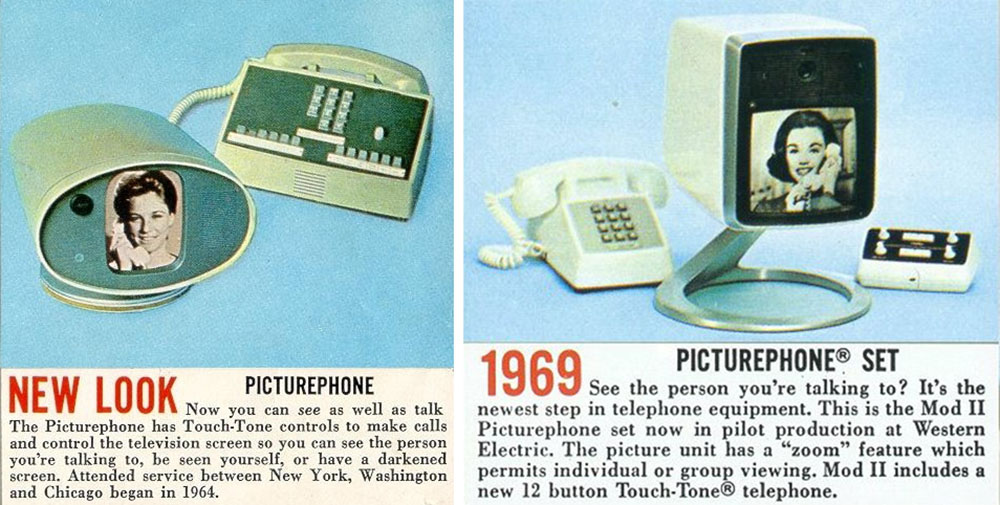 The MOD II, was a technological tour de force. It had an innovative silicon photodiode array camera, a zoom lens, and some graphics capability. It had a 5.25 x 5 inch screen, well suited to show a single person, a full-motion black and white picture at 250 lines resolution, 30 interlaced frames per second, and the ability to alternatively focus on the speaker or on a document laid in front of the unit. The picture could be turned off, and be set to show the caller’s image back to him/herself. [source Engineering and Technology History Wiki]   http://ethw.org/Picturephone

Still no one bought it. 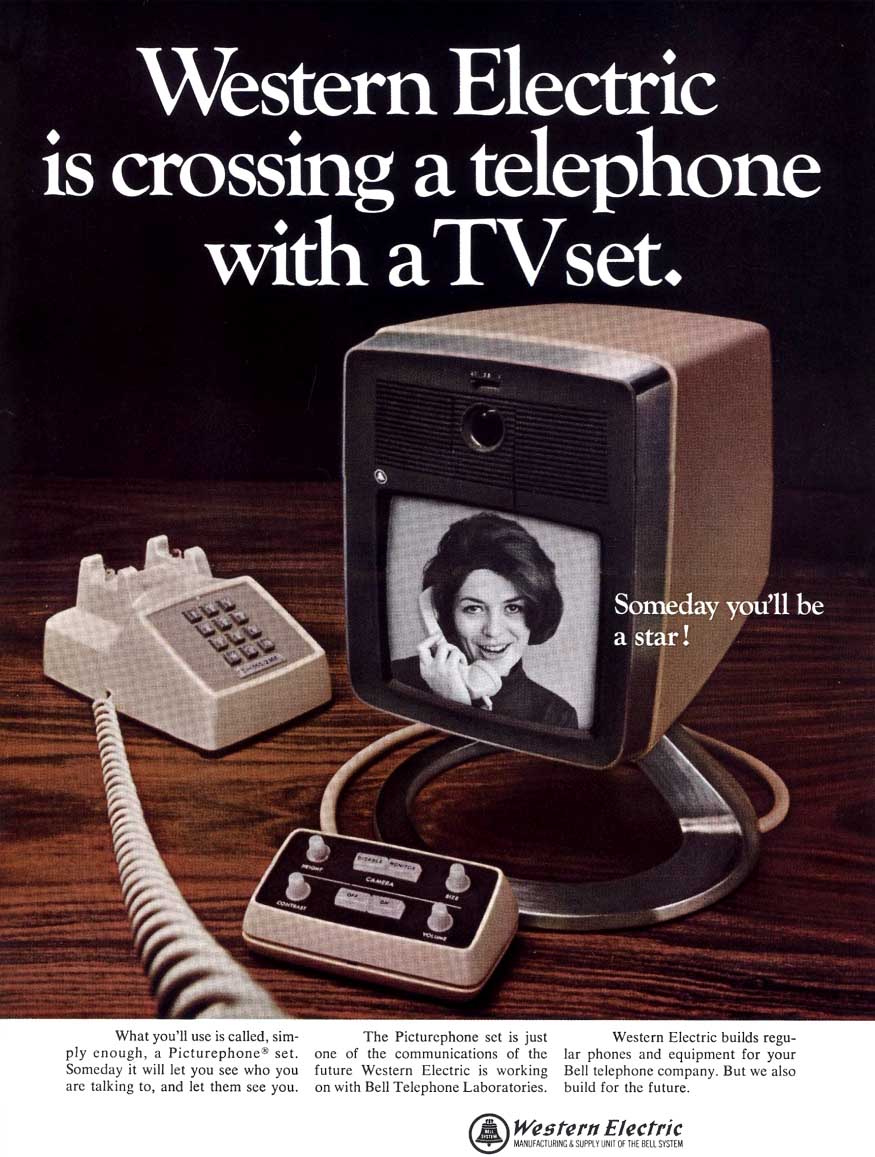 Bell Laboratories released their internal publication, Record magazine, proudly featuring their Picturephone® in June 1969.  Its sixty-plus pages detail the massive amount of effort and investment the company had made in the technology – and the high hopes they had for its future.  Below are some illustrations and corresponding text from the magazine swelling with pride: 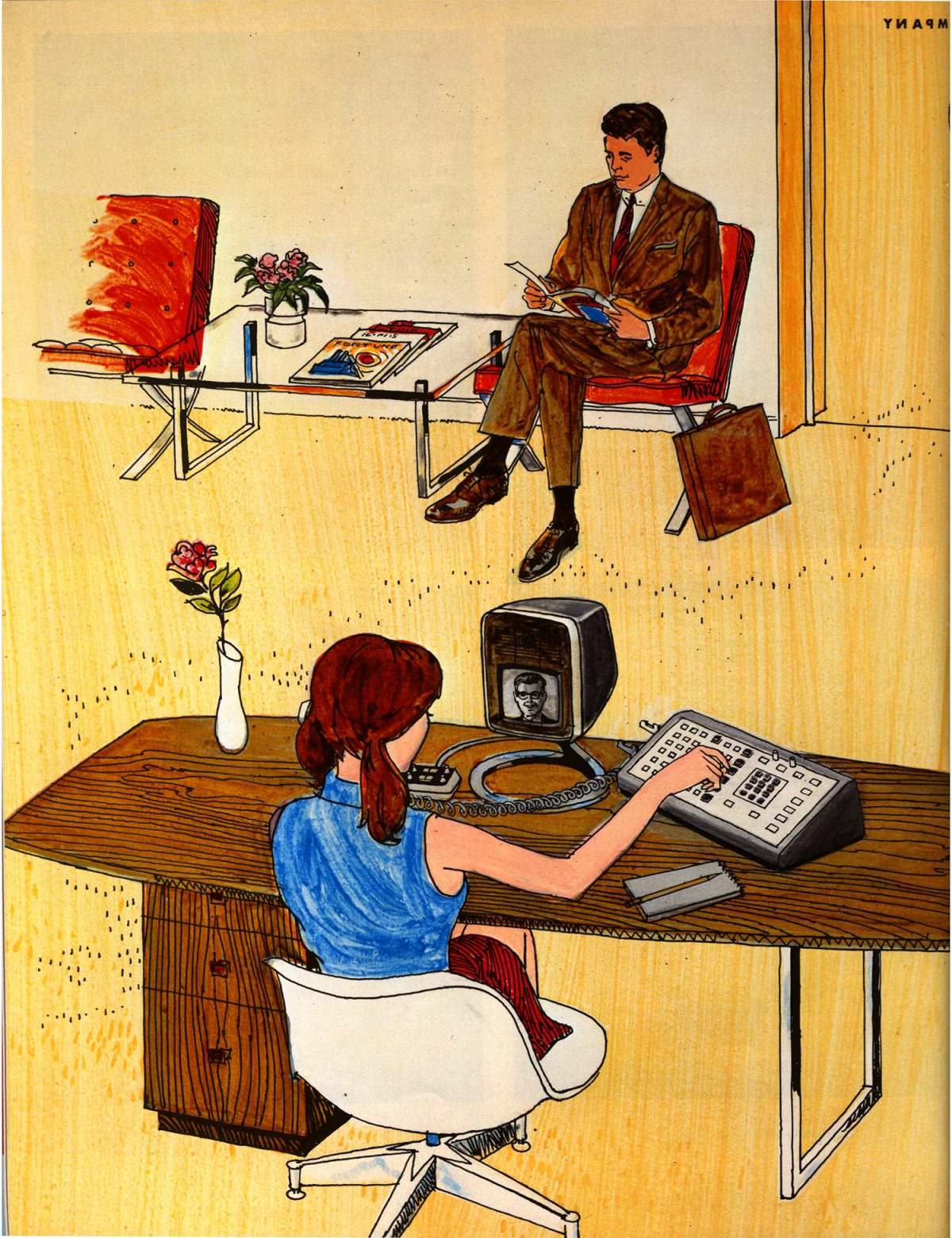 “The first customers for Picturephone service will likely be business and industrial enterprises, where the usefulness is readily apparent. The service can be added to business telephone systems with some changes to present PBX and key telephone equipment.” 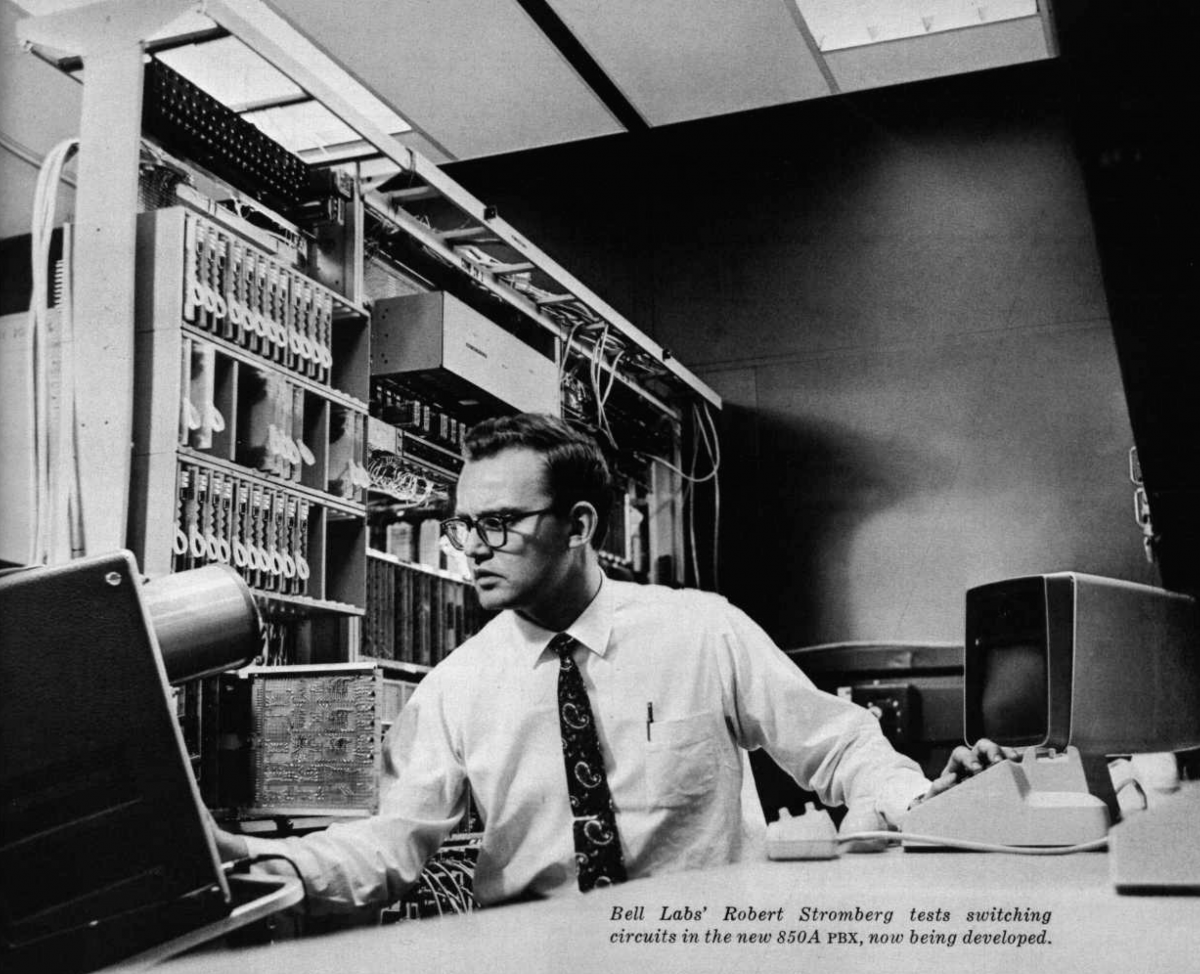 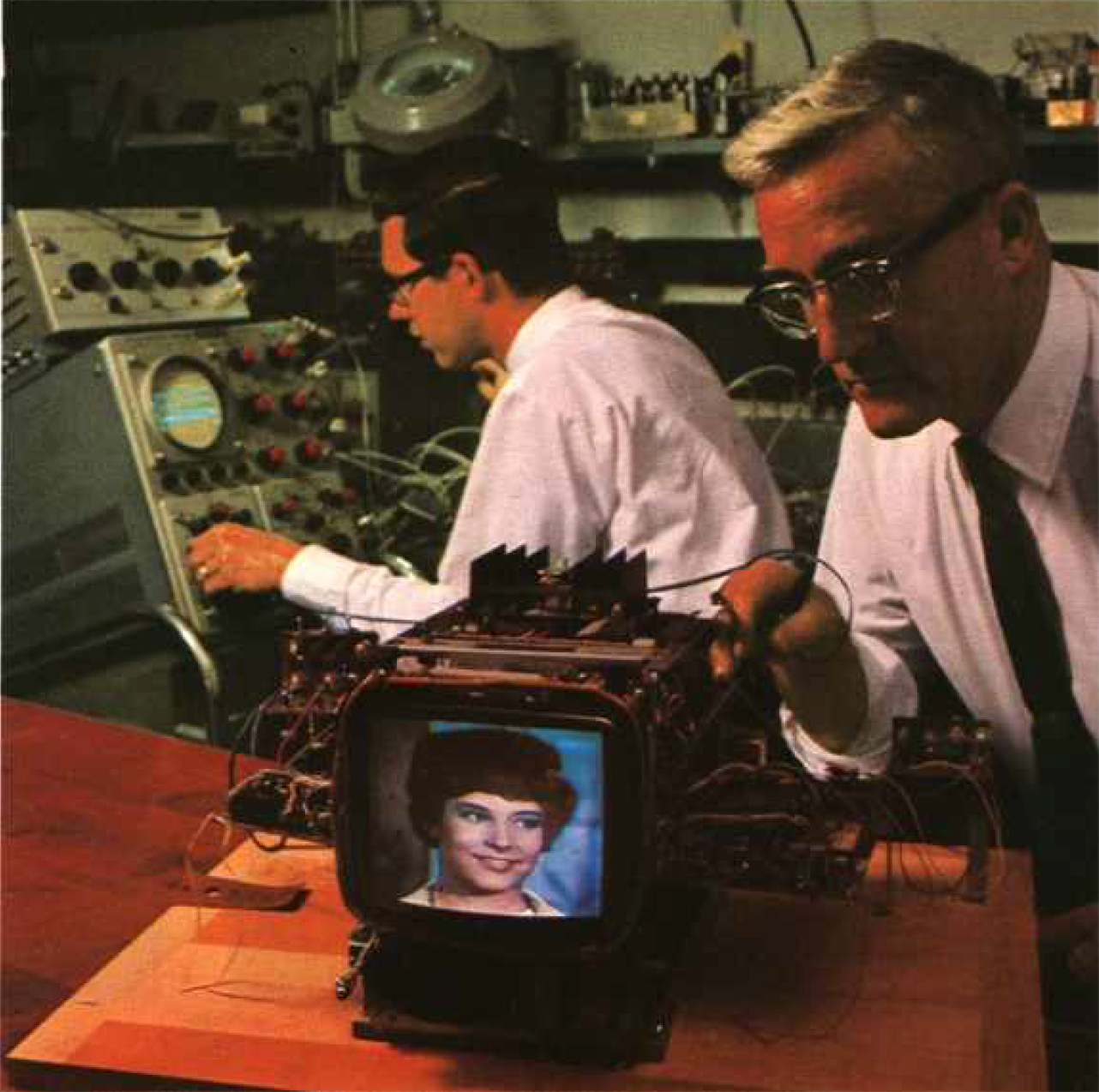 “Research currently in progress at Bell Laboratories will lead eventually to the development of Picturephone service in color.” 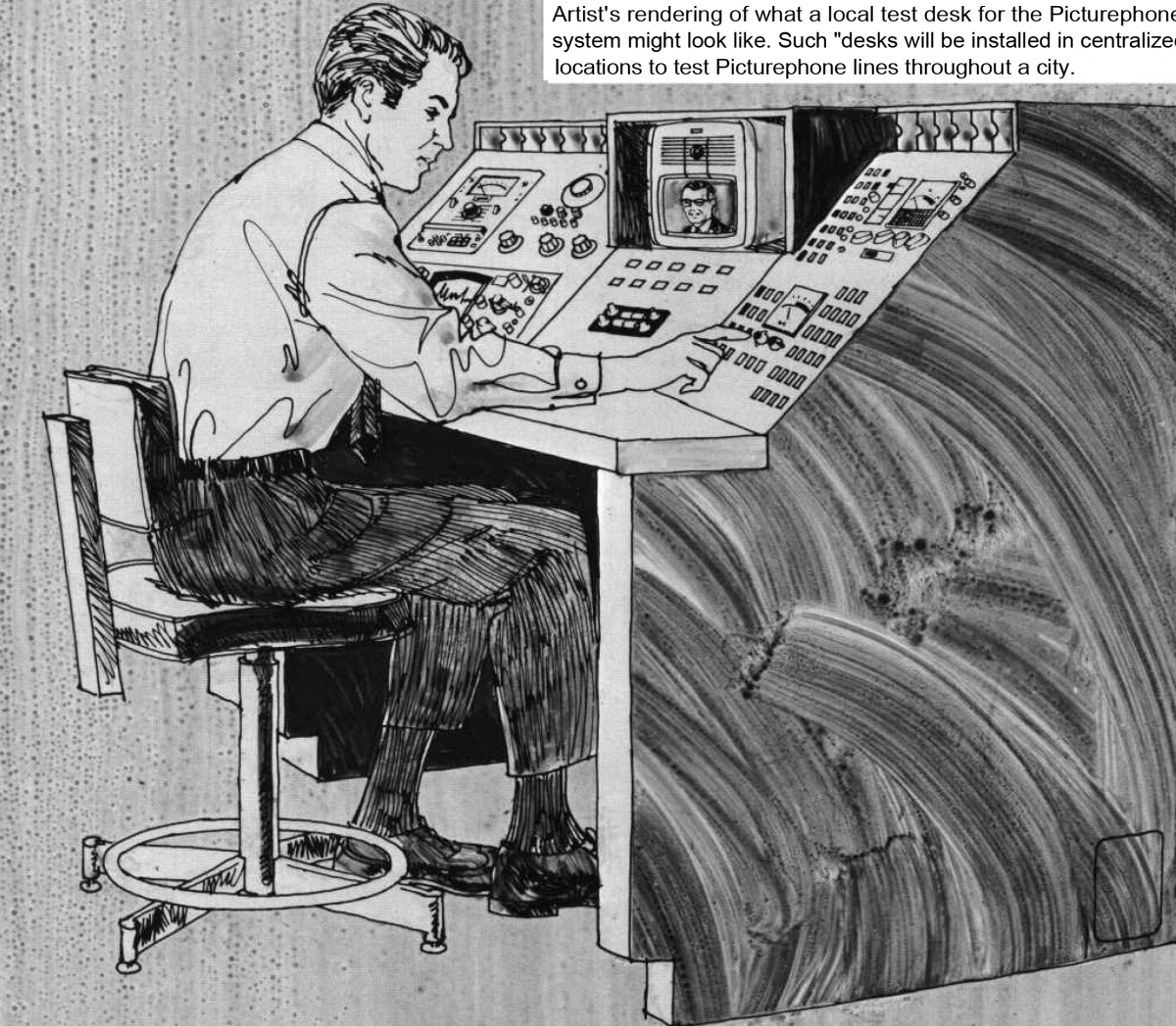 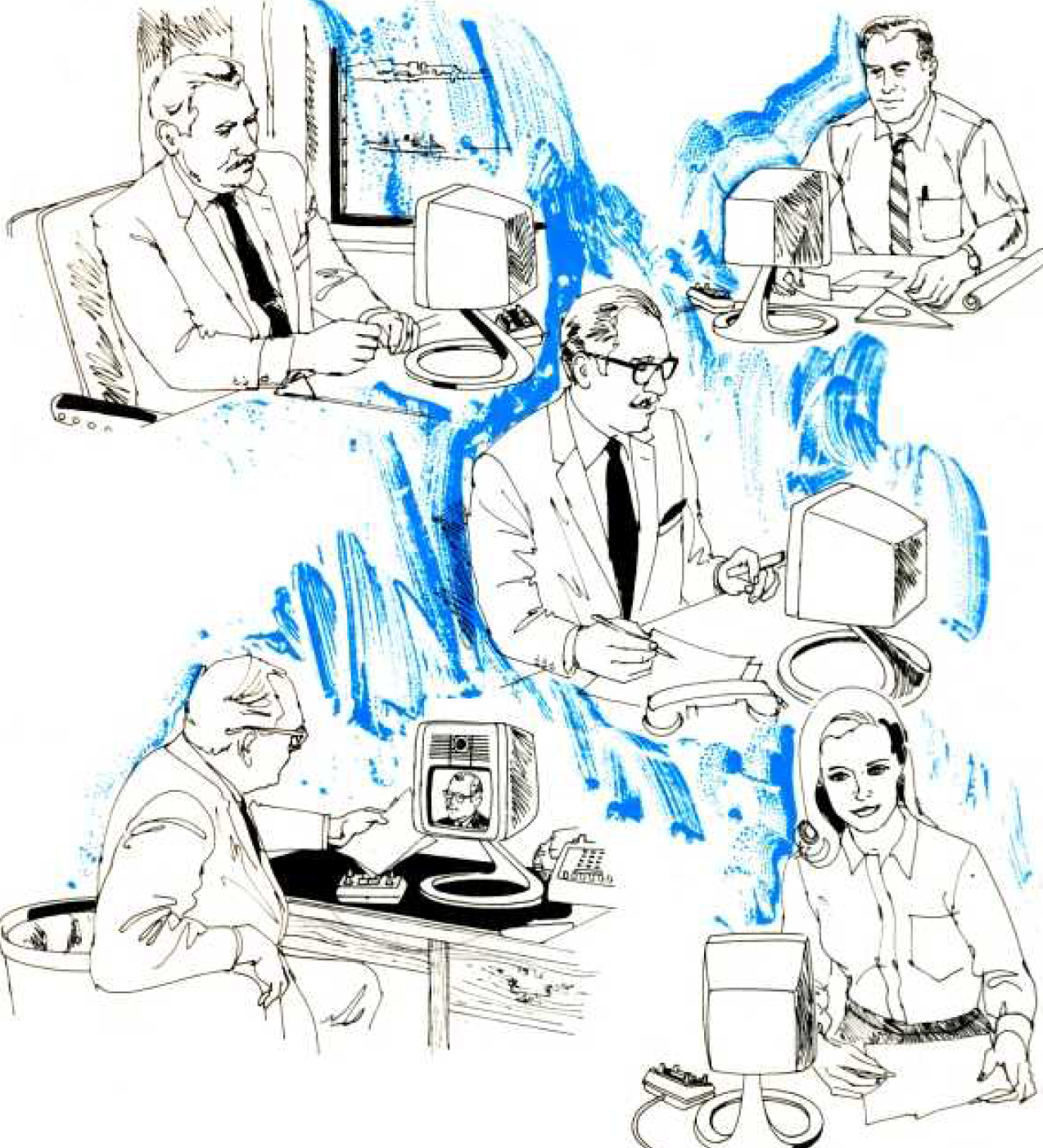 “A voice-operated conference system, now being developed, will increase the utility of Picturephone for business customers.”

5. THE SEVENTIES THROUGH THE NINETIES: AT&T KEEPS TRYING 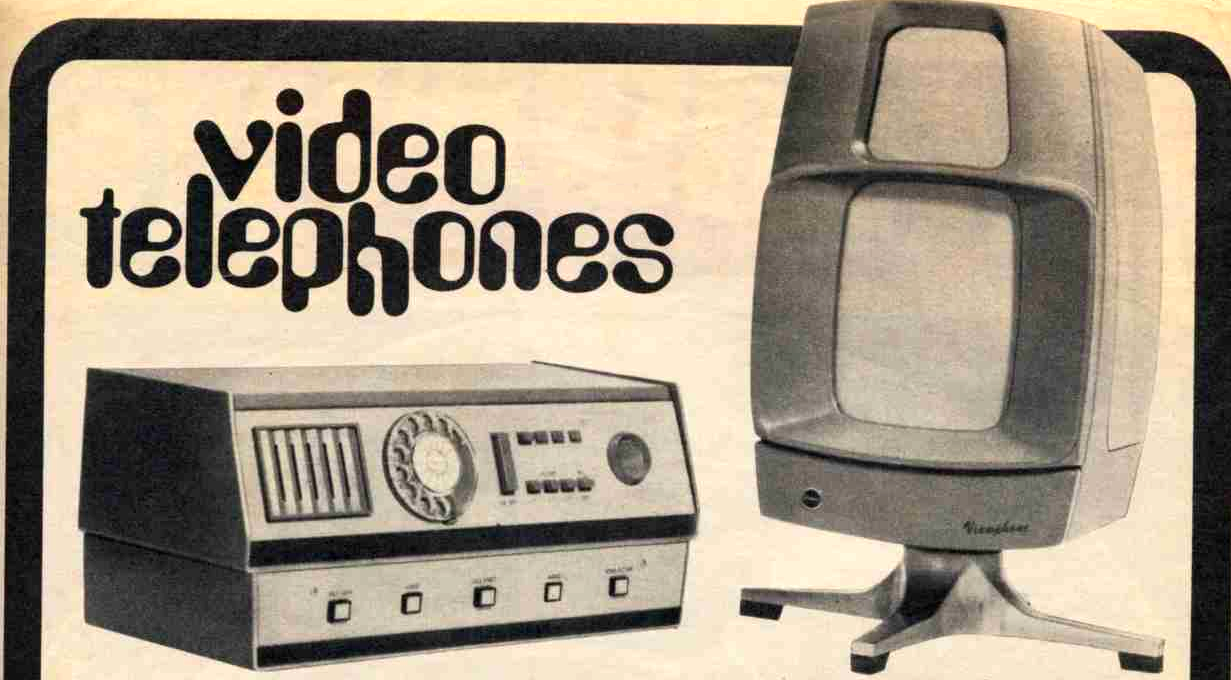 AT&T tried again in 1982, with a corporate geared product: the Picturephone Meeting Service.  But it was still overly expensive, even for a large company to rationalize the purchase. A one-hour video conference call between New York and LA could cost $2,380, on top of a company having to spend $117,500 to buy or $17,760 to lease the equipment. [see The Videophone Turns 50: The Historic Failure That Everybody Wanted] 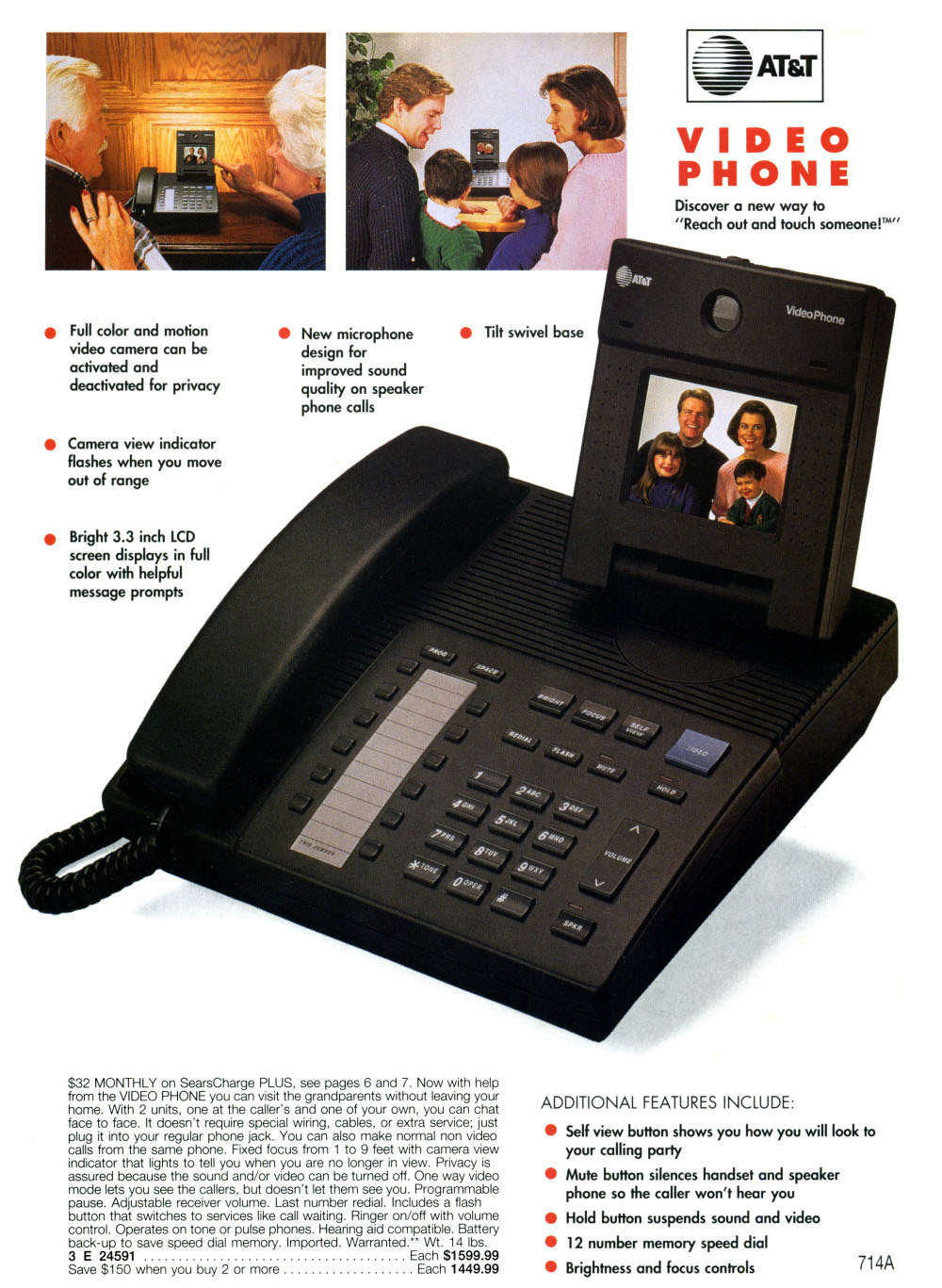 Would you believe AT&T would try yet again?  In 1992 they released the VideoPhone 2500. During the system’s debut, Robert Kavner, AT&T group executive for AT&T Communications Products, said, “This is the way people want to communicate. The time is right. The price is right. The technology is right.”

The initial price tag was $1,500, then lowered due to poor sales.  By 1994, after a thirty year run of failed attempts and massive investment, the company finally gave up.

Who would have guessed that, just a few years later, quite independently of all of AT&T’s valiant efforts, the “picture phone” would become a reality? It turned out a bit different than AT&T envisioned – where video communication was just an optional function of the new phones.  As optimistic as the company was, even they could not have imagined that by 2018 it would be on portable devices in the hands of approximately 2.5 billion people worldwide.