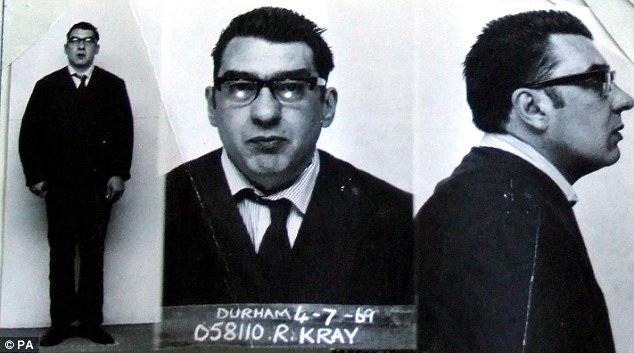 ONE hundred and one years after the evangelist William Booth preached his first open air sermon outside the Blind Beggar Public House on the Whitechapel Road – a sermon which ultimately led to the establishment of the Salvation Army – Ronnie Kray walked into the very same pub. Or at least it would have been the same pub had it not been rebuilt in 1894 by the Mann, Crossman and Paulin’s Albion Brewery at the same address. It was 8.30pm on 9 March 1966 and Kray was accompanied by his right-hand man Ian Barrie, while his driver, John ‘Scotch Jack’ Dickson, was told to wait outside in his Mark 1 Cortina.

A pub had been on the same spot in Whitechapel since 1673 and it was named after Henry de Montfort, the son of the Earl of Leicester, who is said to have posed as a blind beggar to escape detection after the battle of Evesham in 1265. Of course Ronald Kray wouldn’t have been the first villain, big-time or otherwise, who had found themselves in that infamous East End pub. Before the First World War the Blind Beggar was the meeting-place of a gang of pick-pockets and ne’er do wells. One of them called ‘Bulldog’ Wallis got into a fight with a Jewish couple and ended up killing the man by pushing the tip of his umbrella through one of his eyes. The East End code of silence prevailed and ‘no one saw nuffink’ and Wallis had to be released from police custody through lack of evidence. Accompanied by his cheering supporters he returned to the Blind Beggar a hero.

There was no cheering when Ronnie Kray arrived at the Blind Beggar, he and Barrie entered the pub quietly and without a fuss. That is until Barrie shot two bullets into the ceiling. Kray had been told that George Cornell, a member of the sadistic and ruthless south London Richardsons’ gang, was drinking in the pub. Not only was Cornell part of a gang who were the Krays’ main rivals he was particularly disliked by Ronnie who would write one day:

In front of a table full of villains, George Cornell called me a “fat poof”. He virtually signed his own death warrant.

There were just five people in the pub, Cornell and two of his friends, Albie Woods and Johnny Dale who were all at one end of the bar, a 79 year old man was sitting at the other end reading a newspaper and half watching the television, and also a barmaid who was washing glasses and who had just put on ‘The Sun Ain’t Gonna Shine Anymore’ by the Walker Bothers on the pub’s record player. The Blind Beggar didn’t have a juke box.

When George Cornell saw Ronnie approaching he said, sarcastically: “Well, look who’s here…”. While Woods and Dale were  sloping away to hide in the gents, Ronnie walked over to Cornell, took out a 9mm Mauser from his pocket and shot him through his head at close range. Kray wrote in the twins’ autobiography, Our Story:

He fell forward on to the bar. There was some blood on the counter. That’s all that happened. Nothing more. 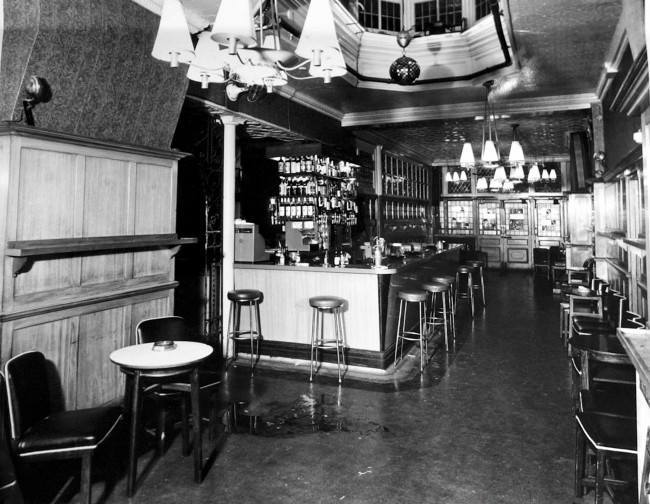 Blood stains on the floor inside the Blind Beggar public house in Whitechapel where George Cornell was killed. 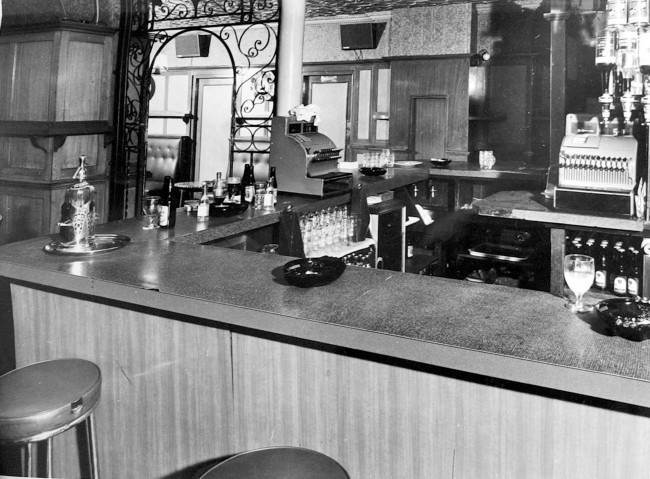 View of counter area looking through into lounge inside the Blind Beggar public house in Whitechapel where George Cornell was killed. 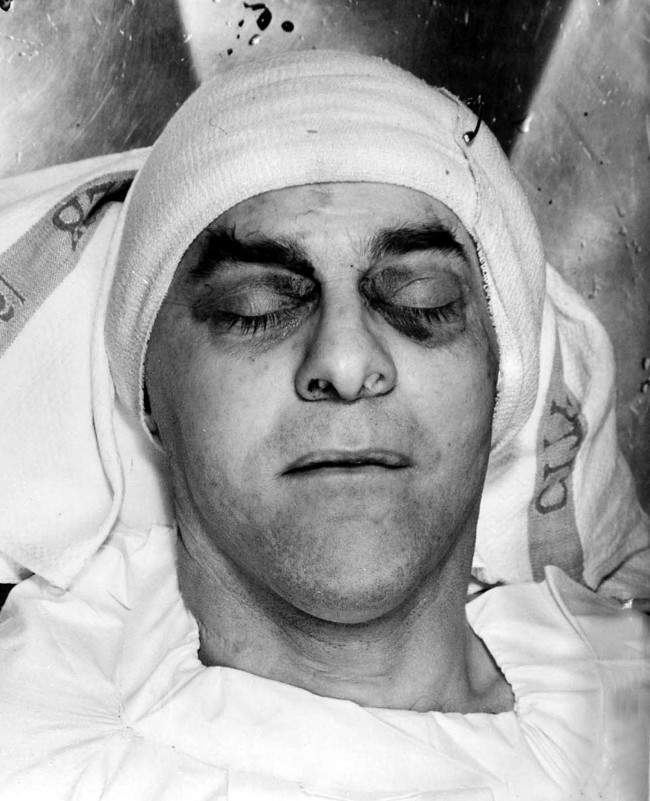 A police photograph of the dead man George Cornell who was killed at the Blind Beggar public house in Whitechapel. 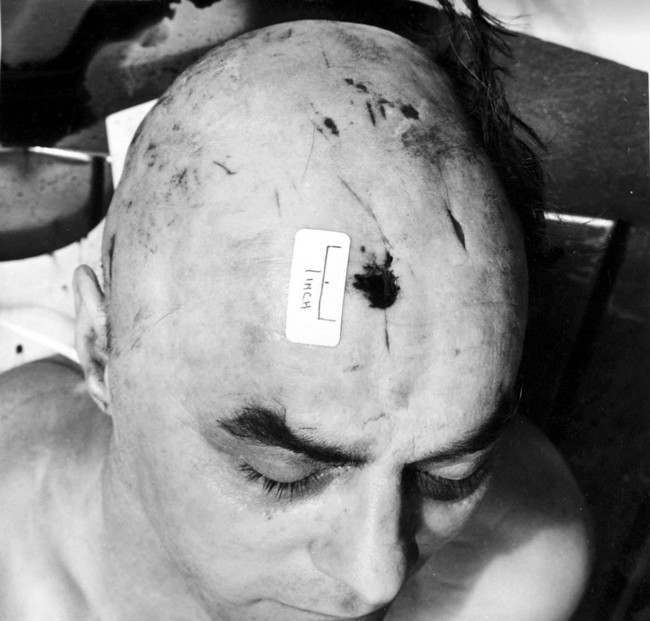 Once outside, and according to ‘Scotch Jack’ the driver, Ronnie Kray was now genuinely excited: ‘I actually shot him,’ Ronnie said, ‘I actually shot him.’ They drove the Cortina back to the Lion pub on Tapp Street about half a mile away. Reggie was was drinking with some of the Firm at the pub and after being told what happened jumped up and shouted: “Drive off the manor. Just drive off the manor.” In various cars and taking different routes the Firm ended up in a back room of the Chequer’s public house on the High Street in Walthamstow. Ronnie’s clothes were burnt and the 9mm Mauser was given to the cat-burglar Charlie Clark to be disposed of. Not particularly well it seems as years later the German 9mm pistol was found in the mud of the River Lee and is now in Scotland Yard’s Black Museum.

George Cornell had been left bleeding on the floor of the Blind Beggar. The manager of the pub, a woman called Patsy Quill, called an ambulance and it wasn’t long before the dying man was being seen by doctors across the road in the London Hospital. They quickly had the patient transferred to Maida Vale Hospital which specialised in brain injuries but at 10.29pm, and roughly two hours after he had been shot, Cornell died before any operation took place.

At midnight the Firm gathered round the radio and cheered when the death of George Cornell was announced. ‘Always shoot to kill’ said a relieved Ronnie before adding usefully, ‘dead men can’t speak.’ 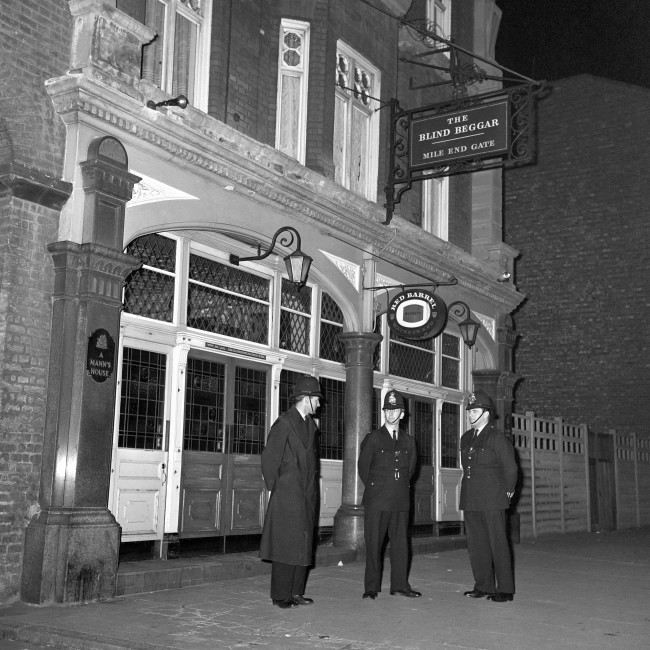 The police found it impossible to find witnesses to the murder. The two friends of Cornell – Albie Woods and Johnny Dale -had quickly slipped away out the back of the pub but not before wiping the glasses on the counter to get rid of any fingerprints. The barmaid at the Blind Beggar said she hadn’t seen who did it. The old man was asked by the police why he would not help put Ronnie Kray away: “I hate the sight of blood,” he said, “particularly my own.”

Although the police led by Detective Superintendent Leonard ‘Nipper’ Read found it impossible to find any witnesses everyone really knew who had committed the murder. George Cornell’s wife Olive certainly did and she turned up at 178 Vallance Road shouting and screaming and threw a brick through the window of the Kray’s family home in anger.

Ronnie had now killed someone and thought it was now time Reggie did likewise. Jack “the Hat” McVitie was a small time member of the Kray gang who had reneged on a contract to kill Leslie Payne, a former accountant of the Krays. Jack ‘The Hat’ had been paid in advance but unwisely had been boasting that he had cheated the twins out of their money. McVitie was lured to ‘a party’ taking place in the basement of 79 Evering Road in Stoke Newington. Reggie Kray put a pistol to McVitie’s head and pulled the trigger twice, but it just clicked and nothing happened. Ronnie Kray then held McVitie and Reggie, with a large knife, stabbed him in the face and stomach before driving the blade deep into his neck. One of the gang would later say, “when Reggie was stabbing Jack, his liver popped out and they had to flush it down the toilet.” McVitie’s body has never been found.

It was to be over two years before the Kray Twins were arrested for the two murders which eventually became their downfall. It didn’t take long for the accountant Leslie Payne to realise he might as well talk to the police. The code of silence that had protected the twins for so long was slowly being broken down. Late in the evening of May 8th 1968 a huge team of nearly 100 armed police officers arrived at Tintagel House in Vauxhall for a final briefing. Tintagel House had been Nipper Read’s headquarters specially chosen to be away from Scotland Yard and any of the Krays’ paid informers. At dawn the next day the team simultaneously arrested the twins and twenty-four other members of the Firm. The twins were found at Braithwaite House in Finsbury (their mother’s council flat as Vallance Road had been demolished as part of the East End slum clearances) where they found Ronnie curled up with a young fair-haired man and Reggie sleeping with a girl from Walthamstow.

On July 6th, 1968 the twins appeared at a hearing in front of the Metropolitan Chief Magistrate, Mr Frank Milton, at Old Street Court. Among the witnesses, at last, was the barmaid from The Blind Beggar – known, as far as the court was concerned, as ‘Mrs X’. Although she had been unable to identify the killer of Cornell on the night of the murder, now under police protection she felt safe enough to point out Ronnie and Ian Barrie as the two men who had walked into the bar that evening. There was now enough evidence against the twins and the case was referred for trail at the Old Bailey. 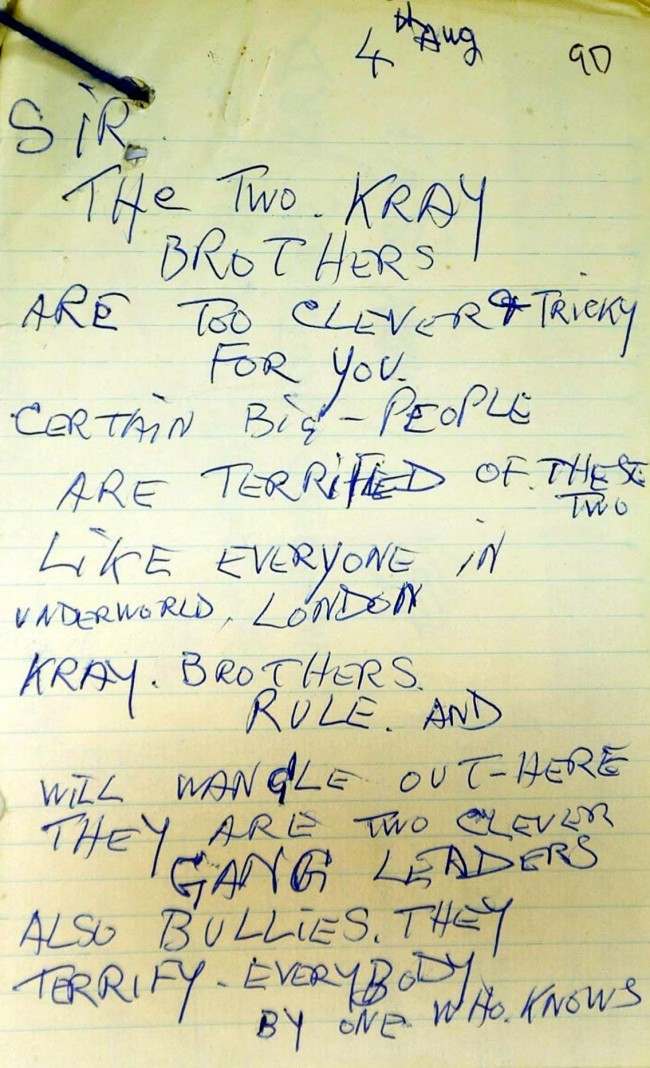 An anonymous letter sent to Scotland Yard about the Krays. One of many. 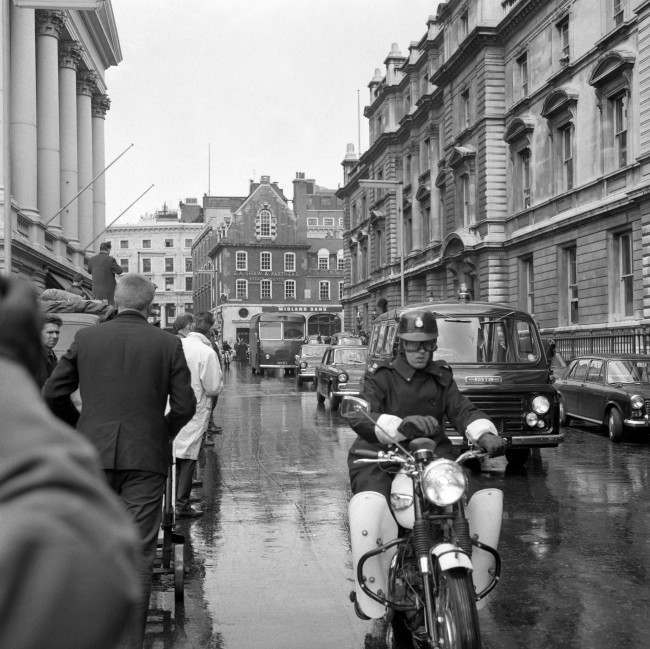 A police Black Maria van is escorted from Bow Street Magistrates Court, taking Ronald and Reginald Kray back to Brixton Prison after they were remanded in custody, charged with murder. PA/PA Archive/Press Association Images

After eight months on remand, the Twins went to trial in January 1969. It was the longest and most expensive criminal case in British history and continued for several weeks. On March 8th, 1969, after six hours 55 minutes the jury unanimously  found the Ronnie and Reggie Kray guilty for the murders of Cornell and McVitie. Mr Justice Melford sentenced the twins to thirty years on gaol with no chance of parole.

For years the Krays’ supporters, of which there were many, maintained that the only people who suffered during their ‘reign’ were other villains and members of the East End underworld. For the ordinary person the East End was safer back then they would say. When the broadcaster, photographer and writer Dan Farson once told the Cockney actor Arthur Mullard that the Krays ‘only killed their own kind’, Mullard responded in his distinctive voice, ‘Yus, ‘uman bein’s!

It has often been written that one of the bullets used to shoot George Cornell ricocheted and hit a juke box while ‘The Sun Ain’t Gonna Shine Anymore’ by the Walker Bothers was playing. The pub didn’t have a juke box back then only a record player but it seems the song was playing when Ronnie Kray walked into the Blind Beggar. However no one really knows whether the story is true that while Cornell lay dying a bullet made the record jump leaving it playing: ‘the sun ain’t gonna shine anymore, anymore, anymore, anymore, anymore…’ 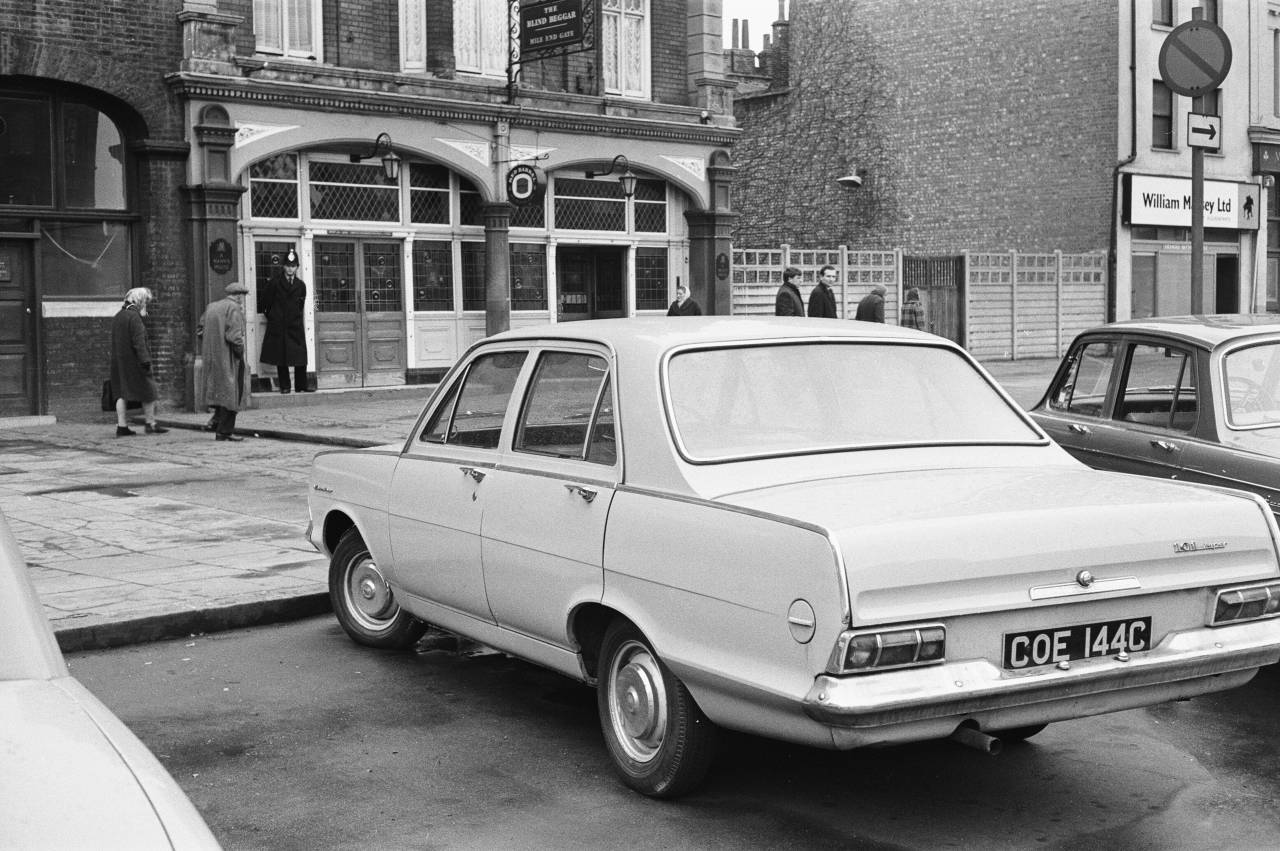 Scene outside the Blind Beggar pub on Whitechapel Road, Stepney, where Richardson gang associate George Cornell was shot in March 1966. Ronnie Kray was charged with his murder. The car parked outside belongs to Mr Cornell. 11th March 1966. 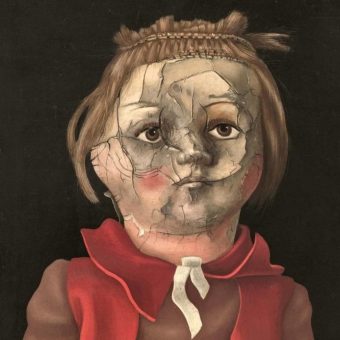