This gallery showcases a selection of decorated and decorative papers from 19th Century Europe.

Water-based inks float for short periods of time; during this window of opportunity the colors can be manipulated into a wide variety of patterns. Inks stay on the paper when alum is applied to the surface at the beginning of the process. An alum treated paper is then laid gently and as evenly as possible onto the surface of the bath once the desired pattern is achieved. With a few ‘happy pats’ done (a technique described by Northwest marble artist Don Guyot to hopefully lessened the possibility of air trapped between paper and bath), the finished marbled paper is lifted from the bath and laid onto a waiting board to be rinsed by clean water. 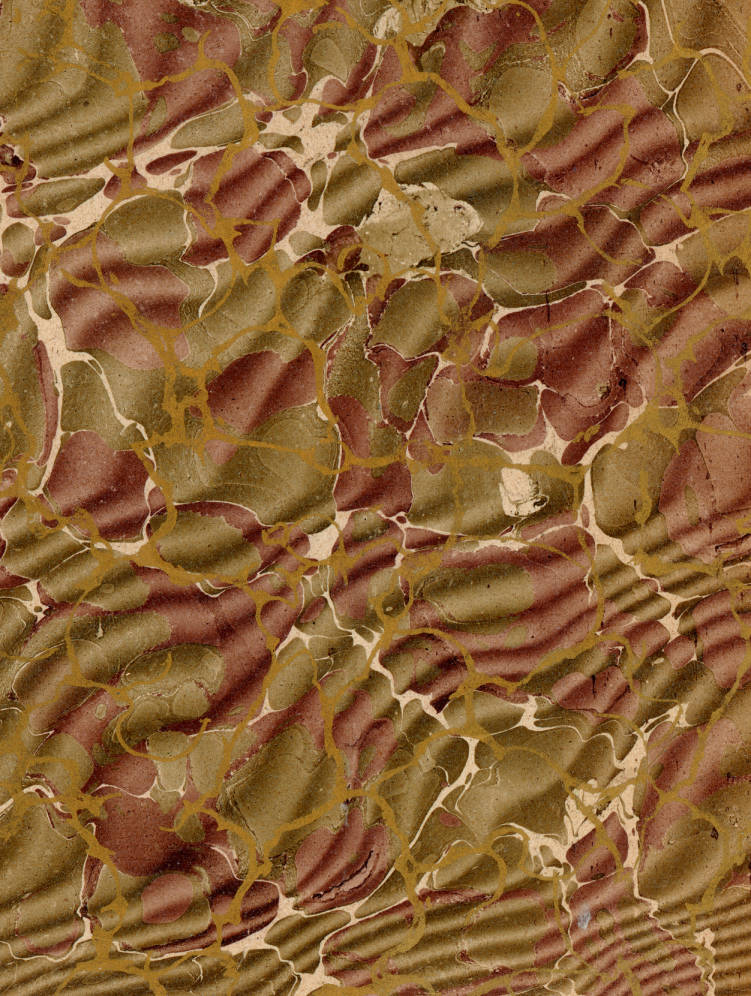 This above pattern is created by first completing a Spanish moiré on Turkish pattern. Then after that paper has been dried, the marbled side would be printed over with a Gold vein pattern (Italian pattern using metallic ink) using a lithographic process . 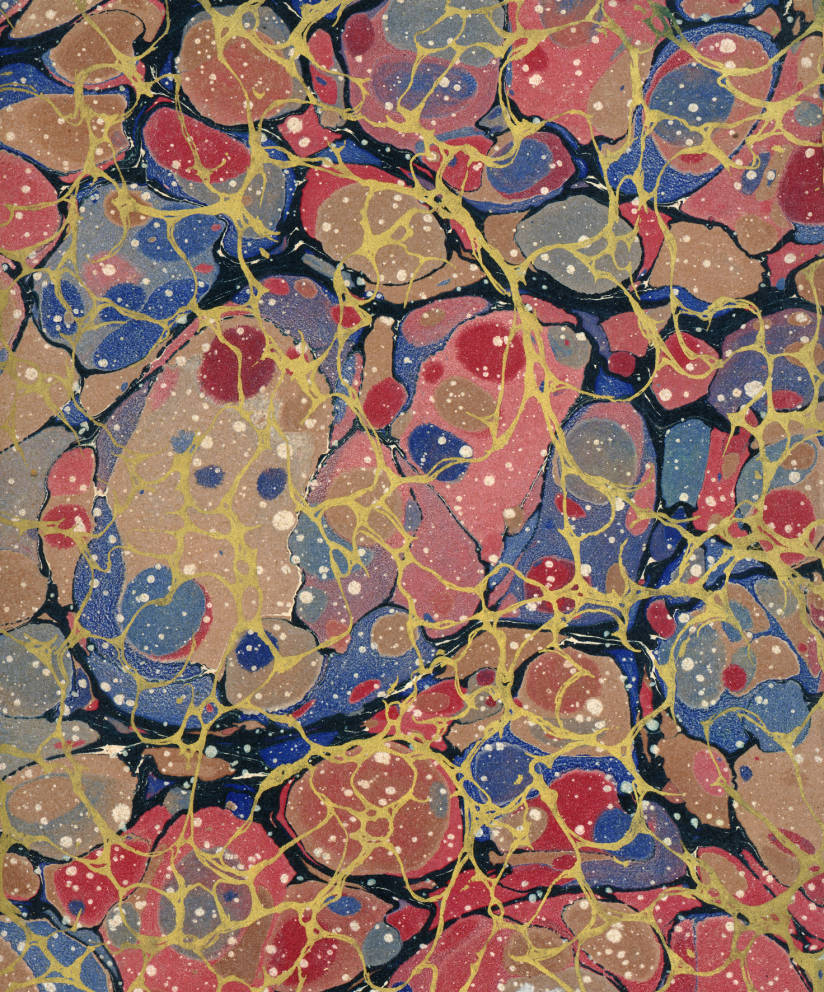 The Golden Vein pattern is related to the Turkish pattern, the only difference in process being that with a Gold Vein marble there is the initial step of using bronze inks. This pattern is created in the regular Turkish pattern way however the first color to be thrown onto the bath would be bronze ink, ensuring that any following colors would have gold veins running between them. 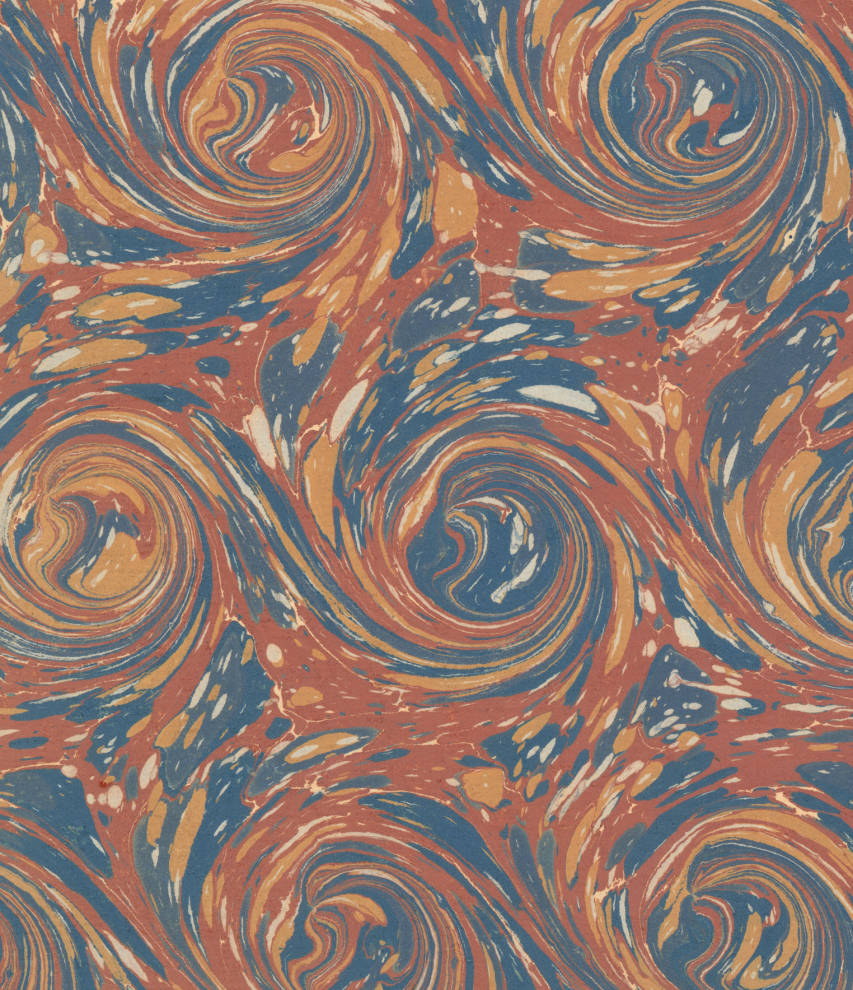 The French Curl pattern is created when any base pattern desired is completed. Next an individual stylus or comb with one set of teeth set in width intervals would be inserted into the bath and swirled, completing the French Curl aspect. 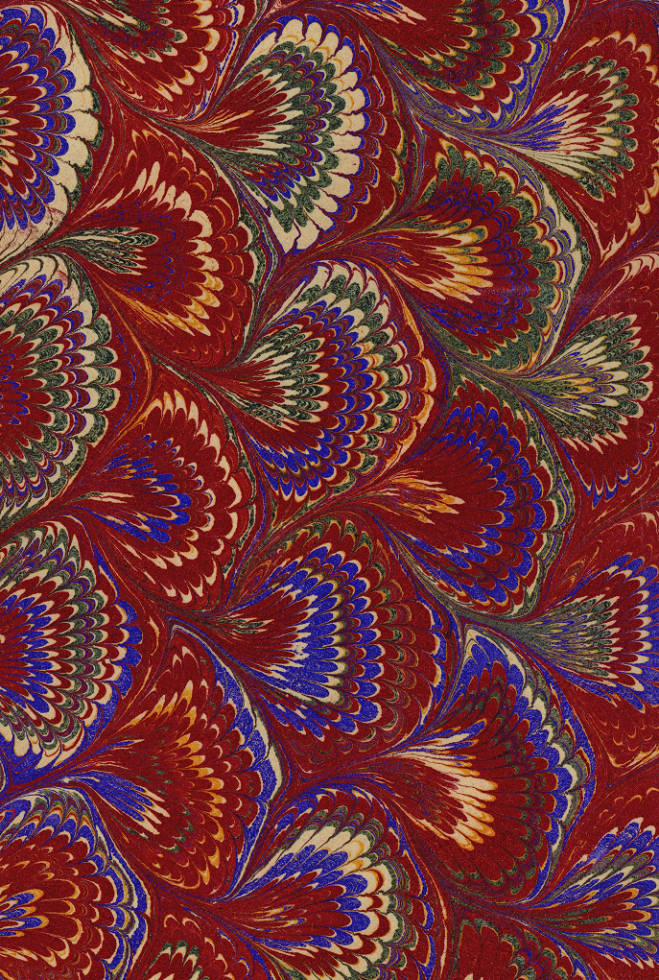 The Bouquet pattern was created near the end of the 18th century. The Bouquet pattern is similar to the Peacock in that for both patterns the final step is done the exact same way; however, a Bouquet pattern according to Muira begins with a Nonpareil base whereas Wolfe defines any base pattern whose final step is done this way to be a Peacock. According to Muira, the pattern is created by starting first with a Nonpareil base. After this is finished, a comb with two sets of teeth is drawn vertically through the bath in loose, wavy lines which cause the appearance of the Nonpareil columns to fan out and appear to be a small bouquet. 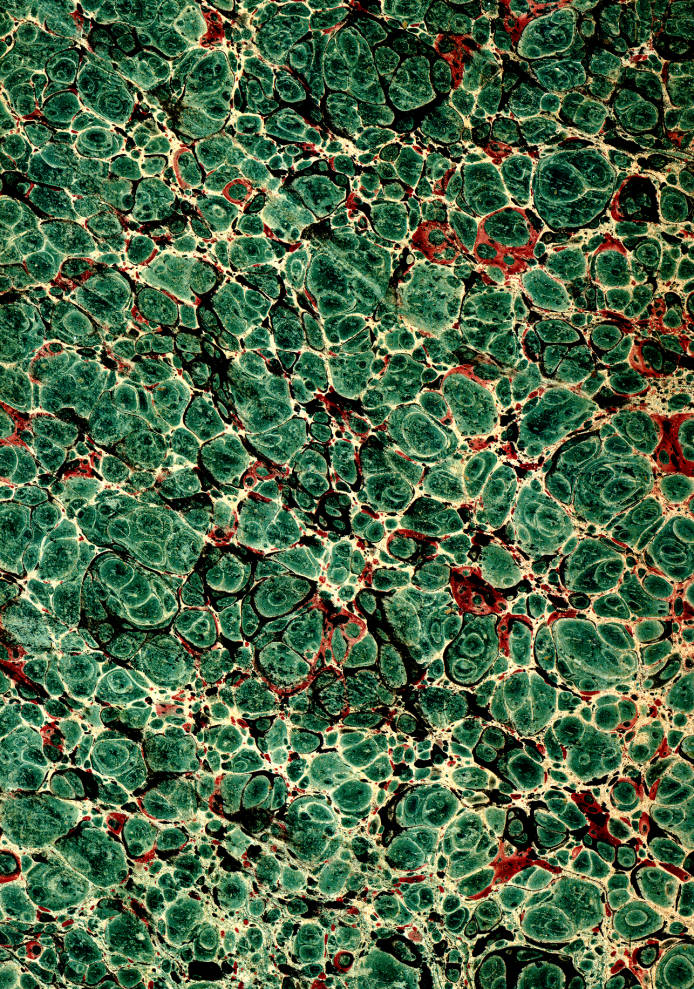 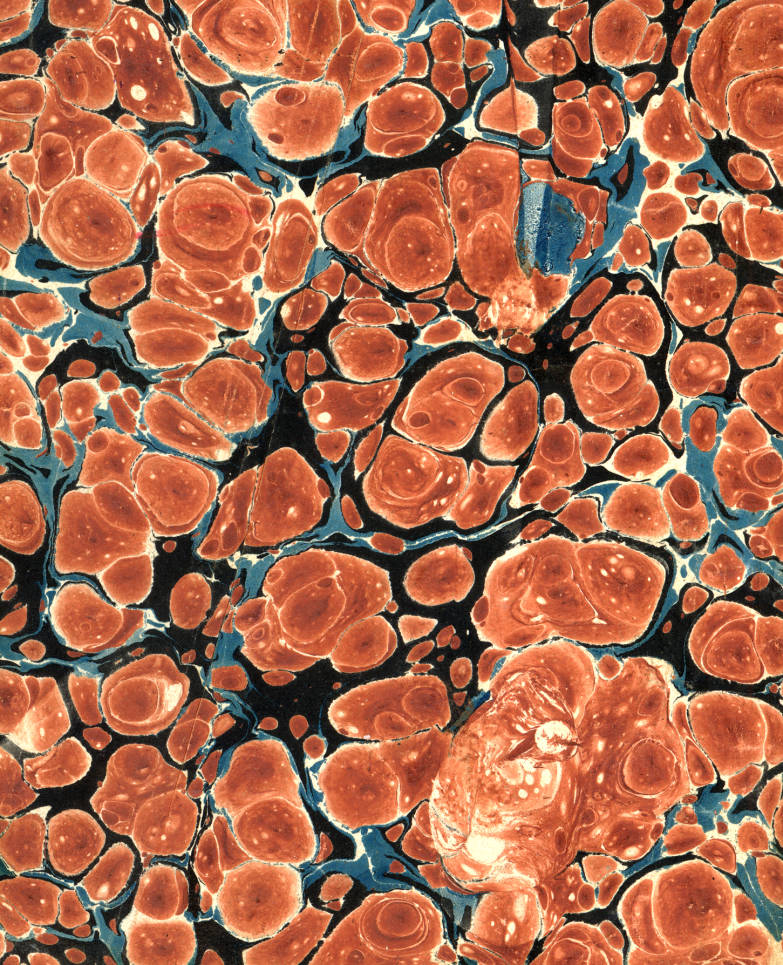 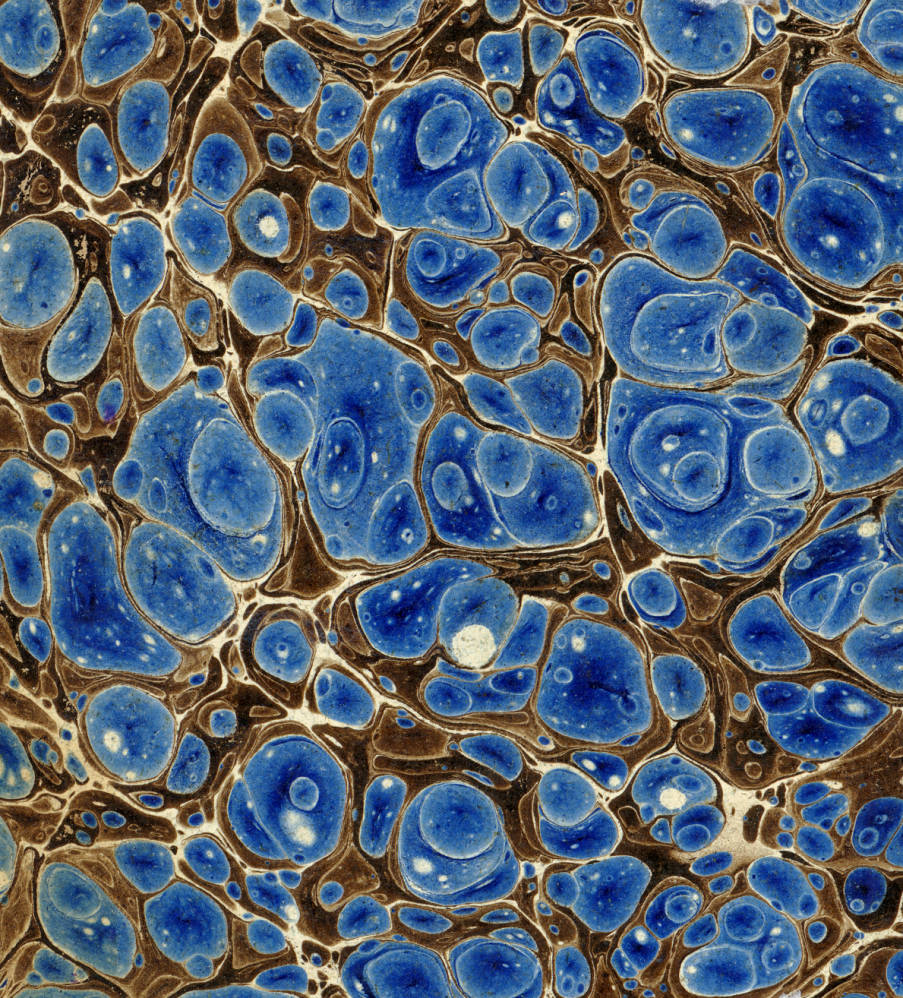 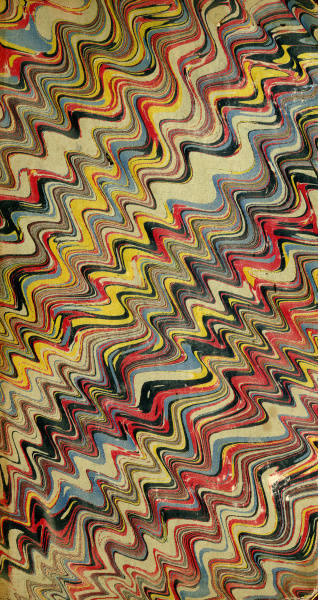 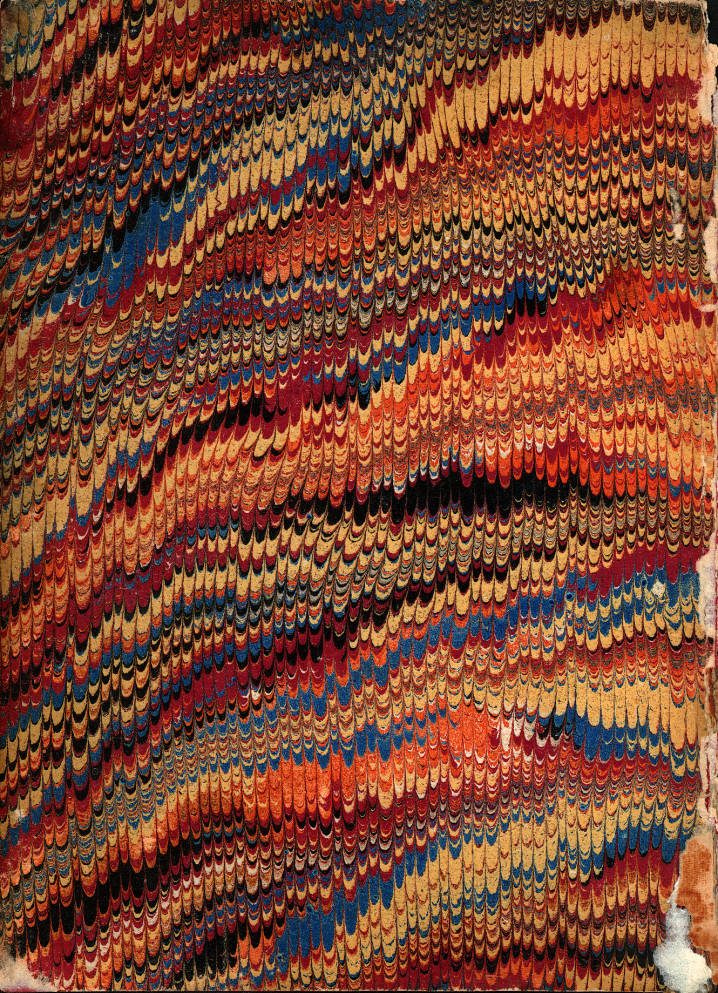 The name for the above pattern is a French word which translated means ‘matchless’ or ‘unrivalled.’ This pattern is related to the Wide comb (Arch) pattern as well as the Old Dutch pattern. All are variations of one another and are often mistaken for each other. The major differences are very difficult to pinpoint, but seem to stem from the size of intervals the last comb’s teeth are set in. This pattern is created when the desired colors are dropped sequentially onto the bath using some sort of implement to regulate the drop sizes. According to Muira a comb with one set of teeth set at intervals of 15-30mm is drawn through the bath horizontally, once in either direction with the second pass halving the first. Then another comb with teeth set at 2-3 mm is drawn once across the bath vertically (or horizontally). 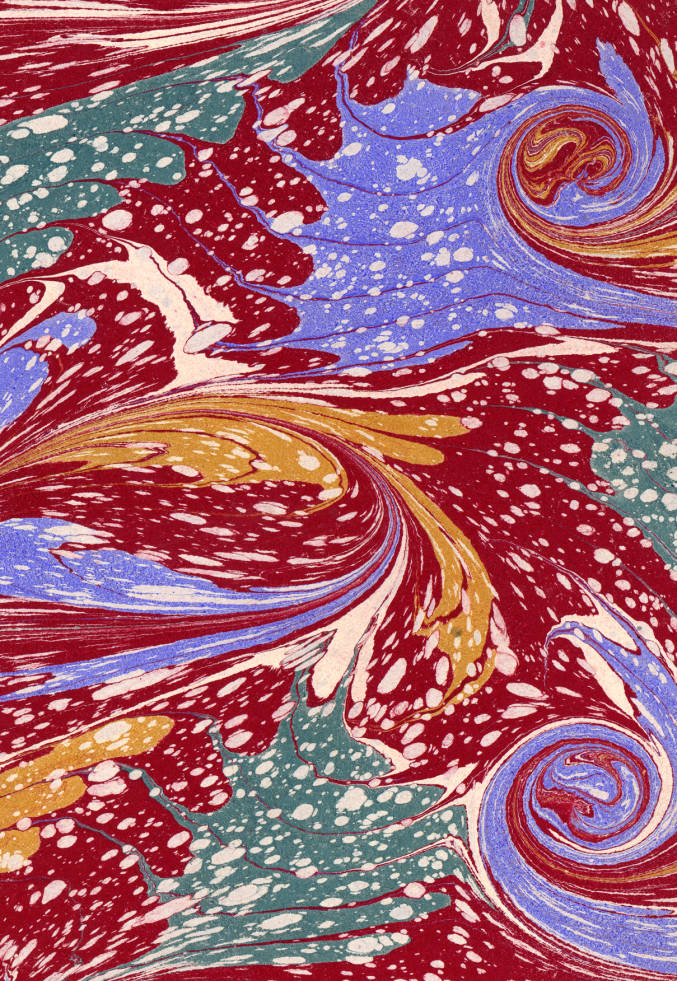 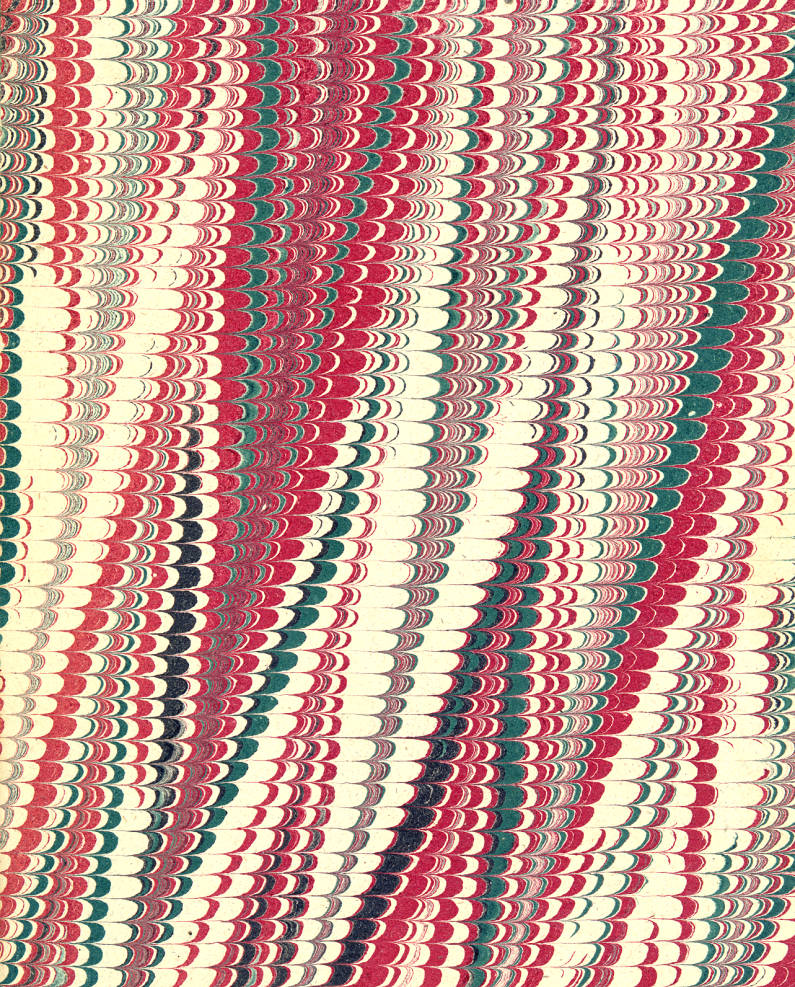 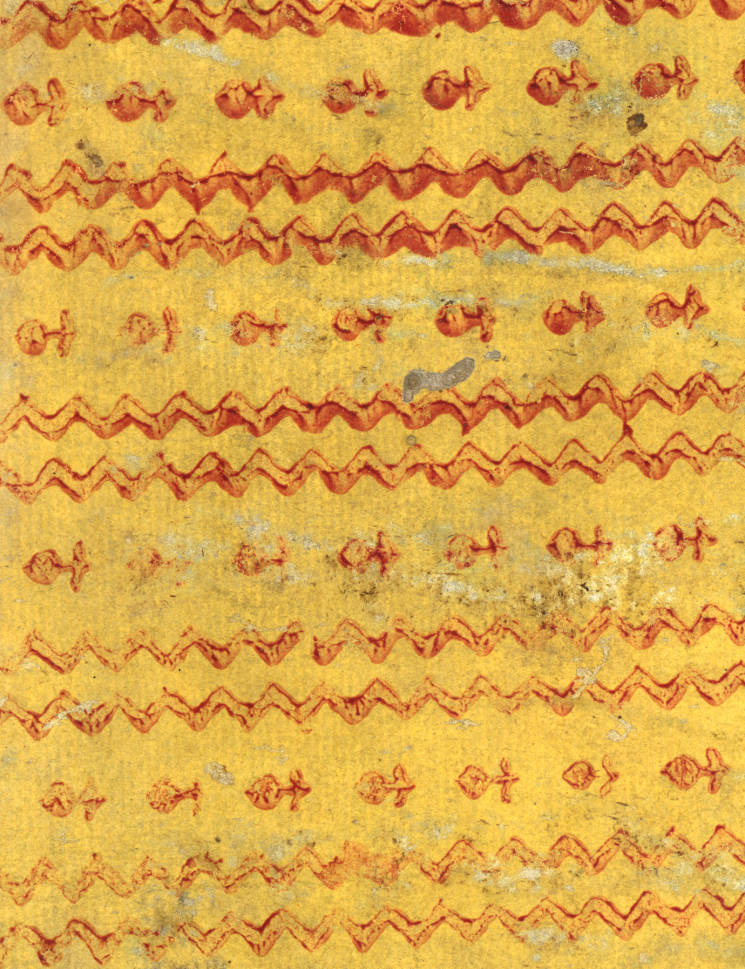 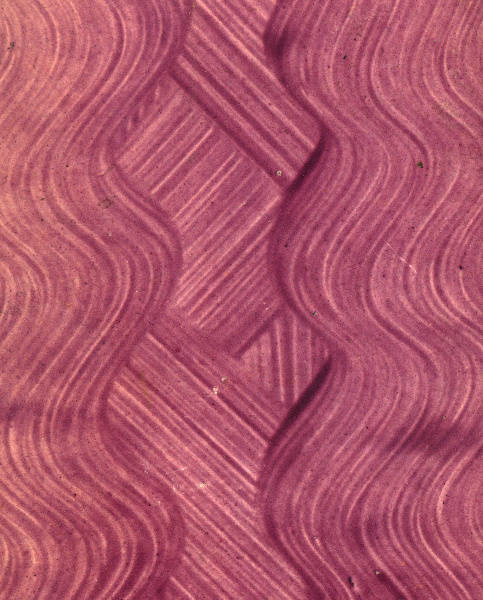 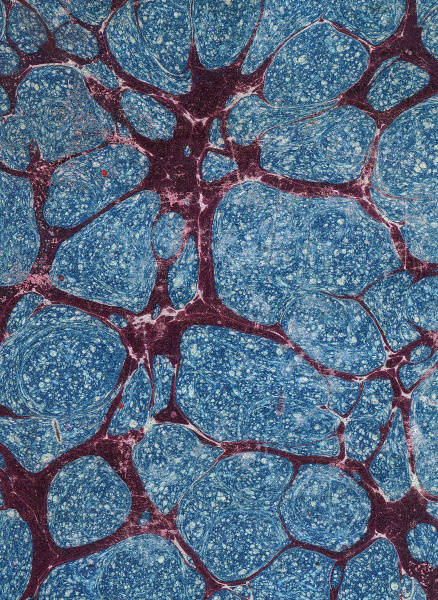 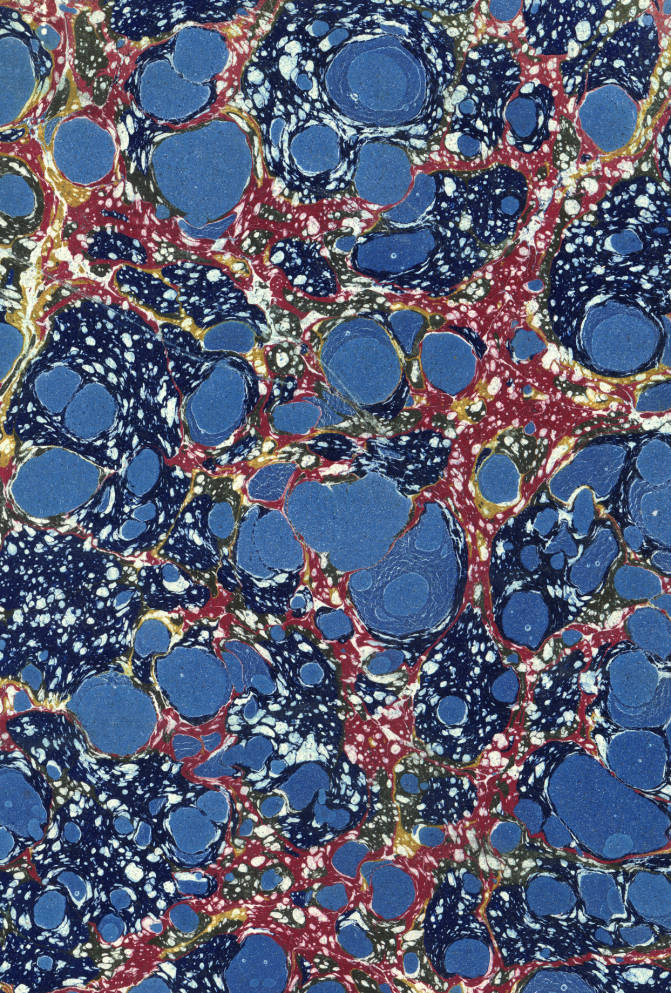 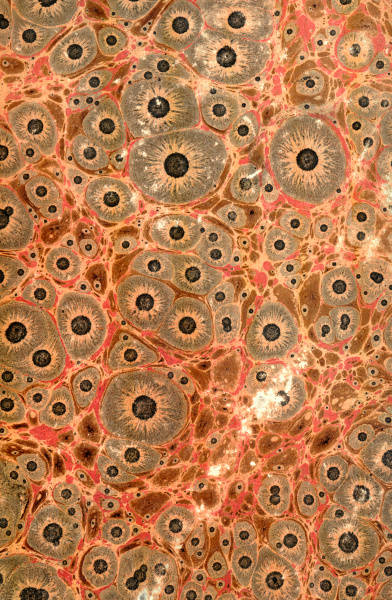 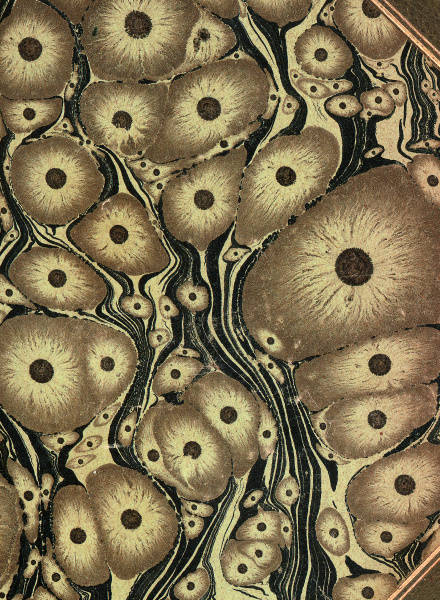 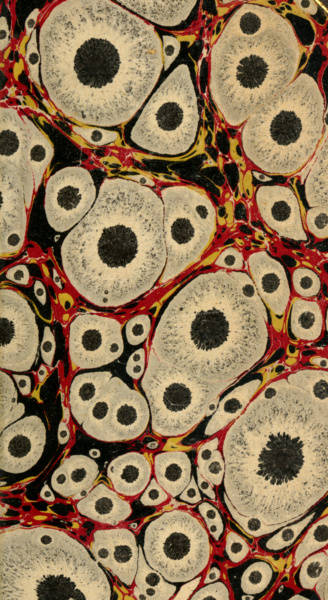 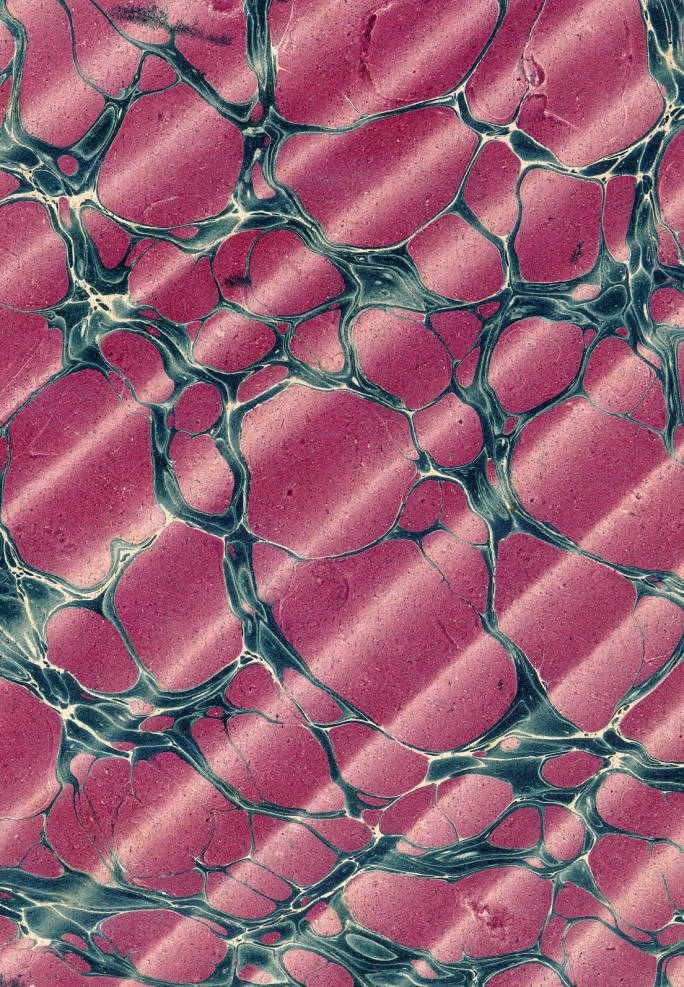 The Spanish pattern was created at the beginning of the 17th century. Marbling lore has suggested (Loring) that it was discovered when a marbler’s assistant who was nursing a hangover and had shaky hands, laid the paper into the bath (to pull up a finished paper) and as a consequence of the unsteady hands pulled a pattern with the linear, gradated lines characteristic of this pattern. The pattern is created typically by starting with a Turkish base, then as the paper is laid onto the bath it is agitated back and forth in regular motions, repeatedly. 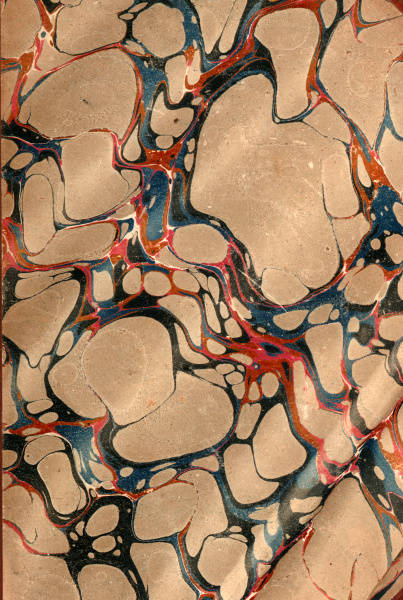 Turkish is the oldest of Western marbled patterns and dates back to as early as the middle part of the 15th century. This pattern is created when one or more colors are thrown onto the surface of the bath using a marbling brush. The first colors thrown tend to constrict as other follow and become the ‘vein’ colors for the latter thrown inks. 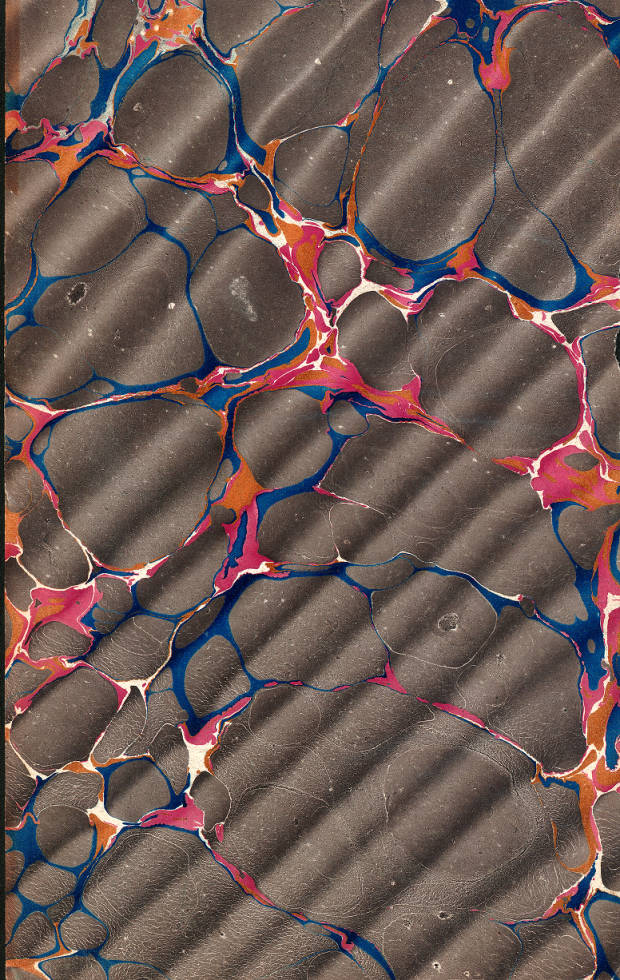 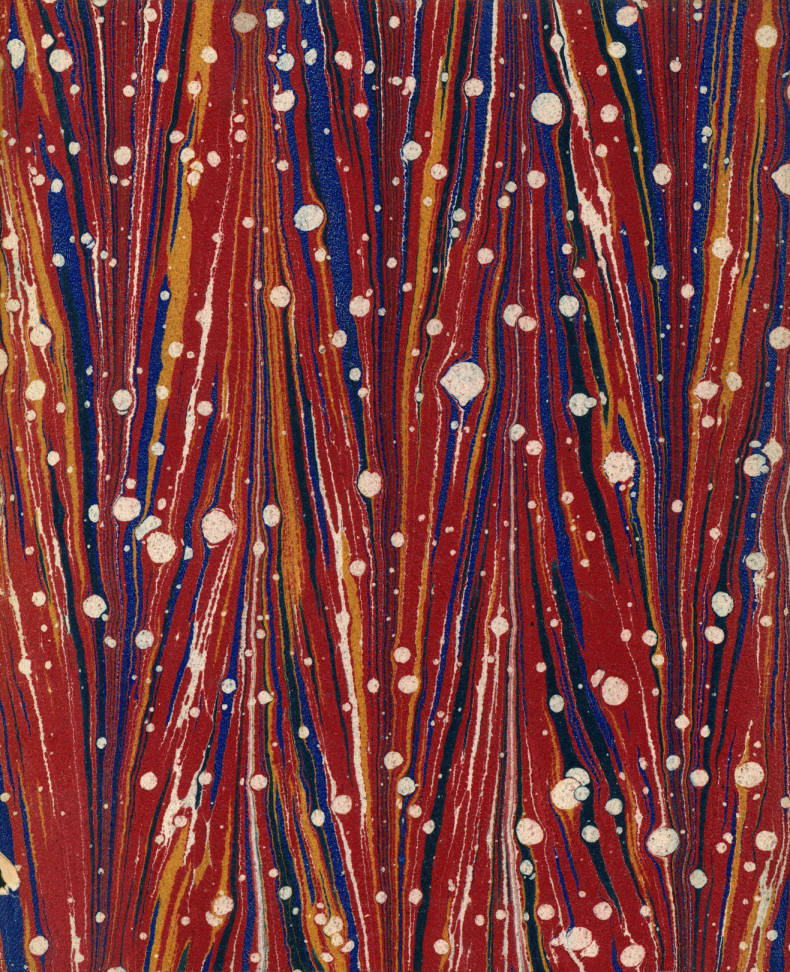 The Antique pattern is very similar to and could be mistaken for a Zebra pattern. Wolfe’s explanation of how both are created distinguishes between the two mostly by their final step. The Zebra having less finely sized drops of color than one would see in an Antique straight. This pattern is created by first completing a Feather pattern. Then, a shower of fine (usually white) color dots would be sprinkled over the entire bath. 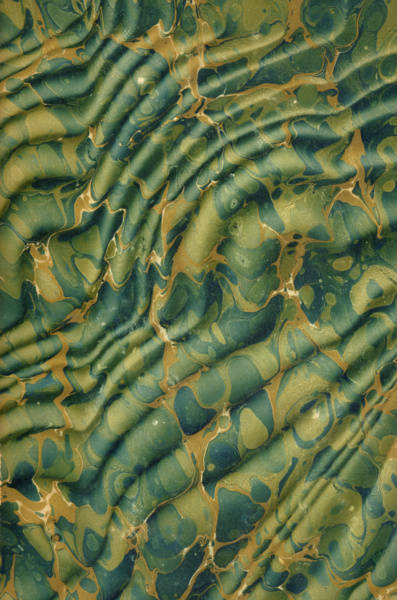 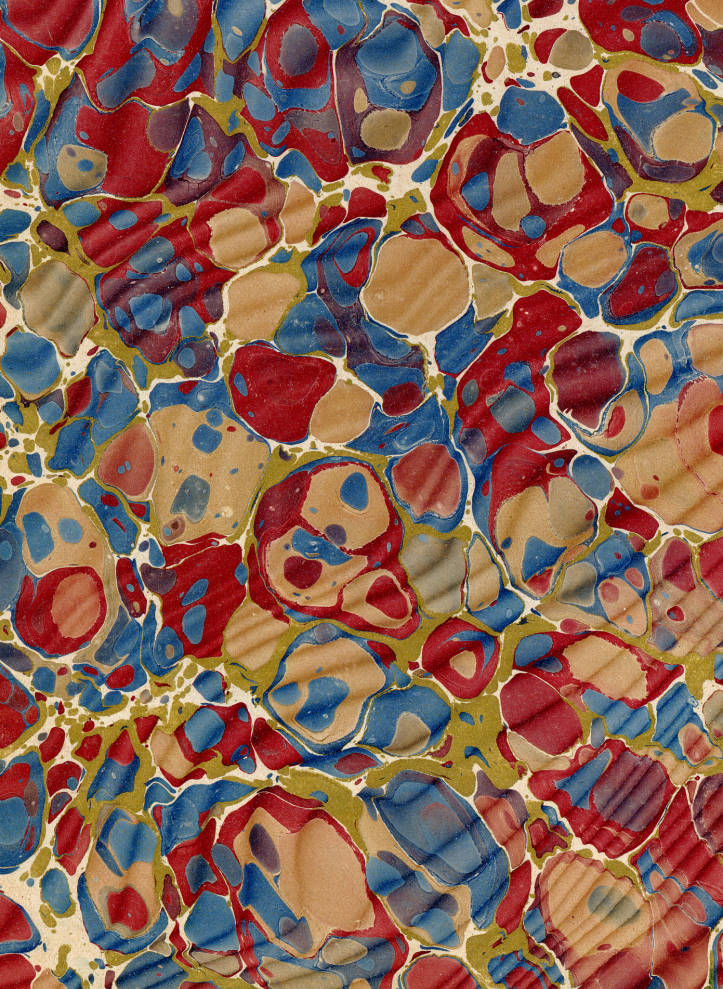 Spanish moire is related to and a variation of the (typical) Spanish marble. It was created about the same time at the beginning of the 17th century…. the pattern is created starting with a Turkish base. A paper which has been folded in half diagonally and vertically (or horizontally and vertically) is laid onto the bath, moving slightly from side to side to create the curvilinear, gradations typical of this pattern. 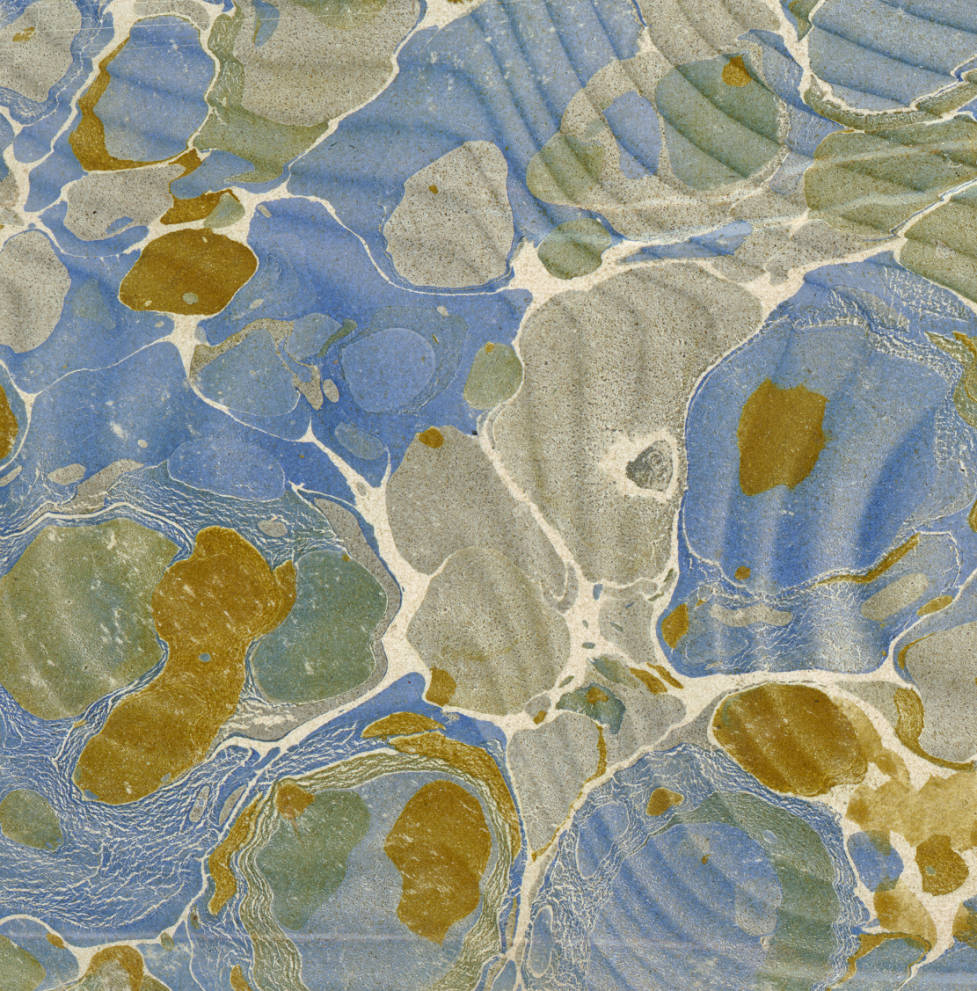 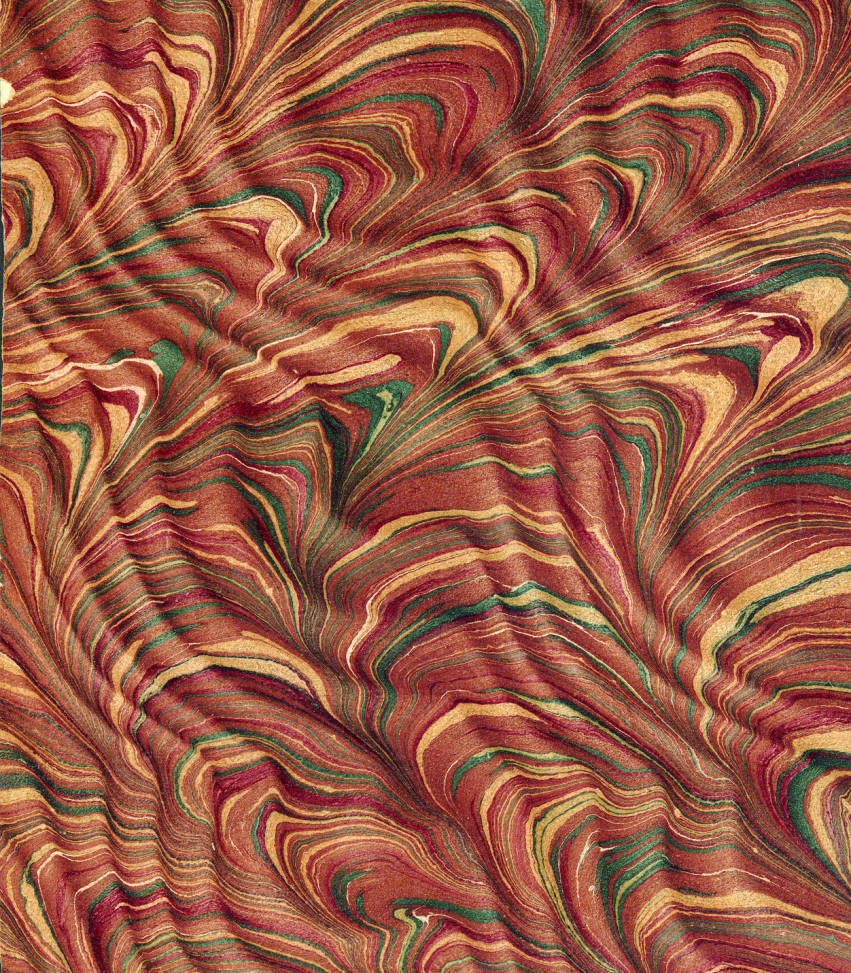 The Serpentine… was first created in the middle of the 19th century. The pattern is created by starting with a Turkish base. A comb with one set of teeth is drawn through the bath twice vertically, once in either direction with the second pass halving the first. This step is repeated horizontally. Then the final step is to draw a comb, with one set of teeth set at slightly wider intervals, through the bath once vertically in wavy lines reminiscent of the way in which a snake moves. 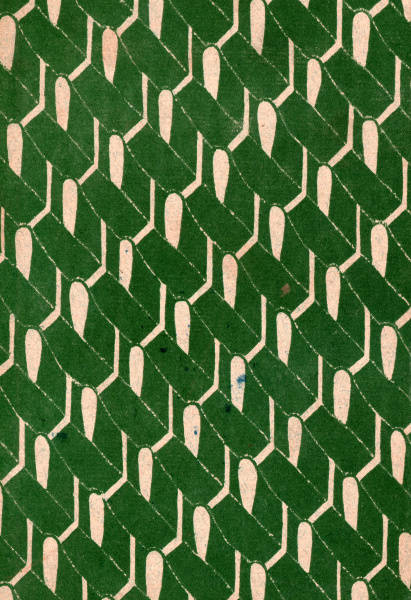 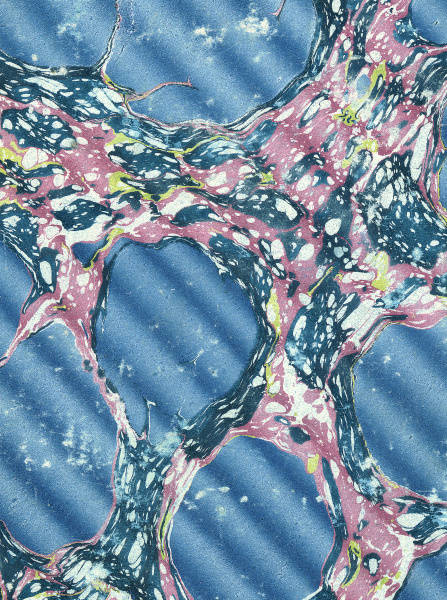 This pattern is related to and can be mistaken for the Gloster marble. There are two noticeable differences between the two patterns. One being that the Gloster employs the use of a dispersant mixed with one or more colors which are confined to specific areas whereas in a Stormont the dispersant tends to cover the entire bath. The second and more distinguishing difference is that a Gloster pattern characteristically has a combed base whereas a Stormont would typically have a Turkish base. This pattern is created starting with a Turkish base. One or more colors would then be mixed with a dispersant, such as turpentine, and thrown onto the bath. These dispersant-mixed colors will appear to be covered with tiny holes. When making this pattern you must work faster than usual to pull the marble because the turpentine will evaporate, closing up this lacy network of holes. 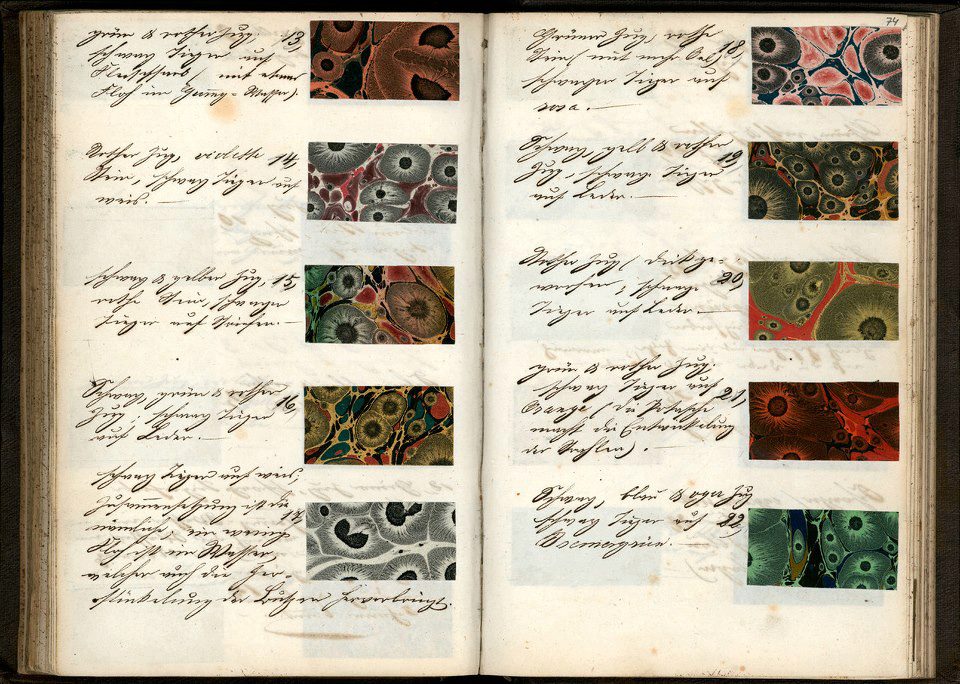 A late 19th century German recipe book for decorated paper samples. From the Koninklijke Bibliotheek in the Netherlands.

Via: University of Washington