‘We’ve passed the 50-second mark. Power transfer is complete – we’re on internal power with the launch vehicle at this time. 40 seconds away from the Apollo 11 lift-off. All the second stage tanks now pressurized. 35 seconds and counting. We are still Go with Apollo 11. 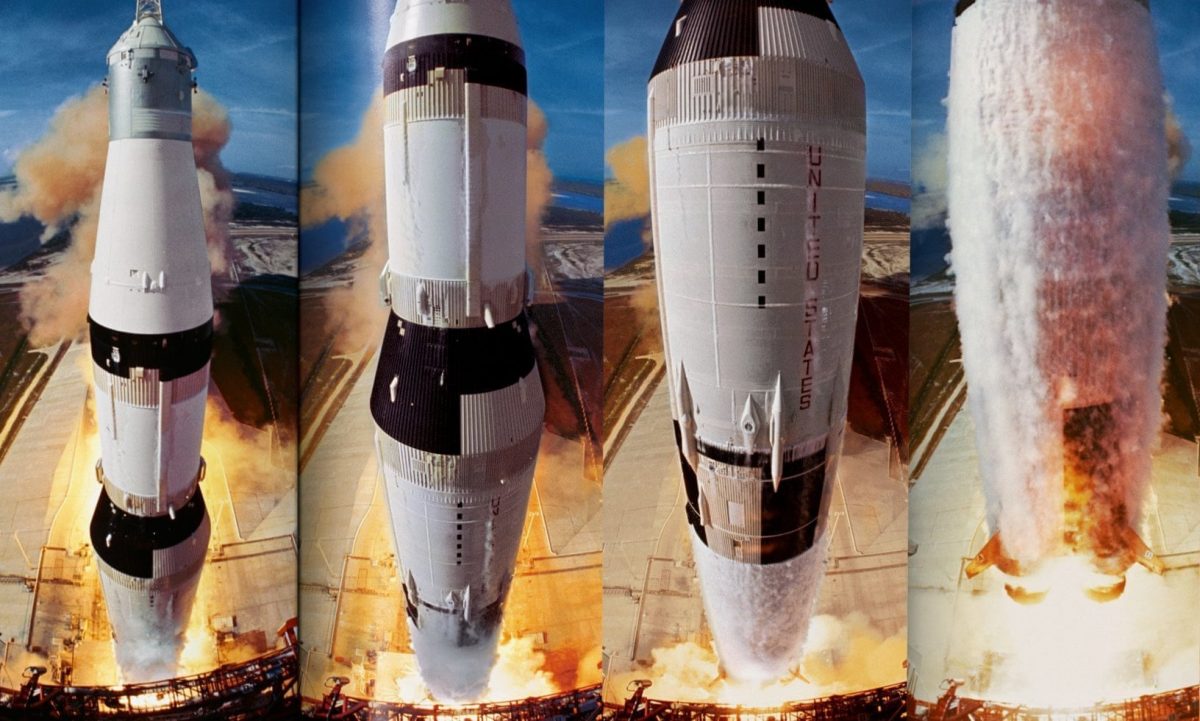 Via Moonfire by Norman Mailer. Photograph Ralph Morse, via Taschen

On July 16, 1969 Apollo 11 blasted the first humans to the moon. Neil Armstrong, Buzz Aldrin and Michael Collins were strapped to the huge Saturn V rocket. It stood around 36-storeys high. Around 85% of its overall weight is propellant. At 9:32 a.m. EDT, the bomb goes off. The three astronauts are on their way to the great unknown. 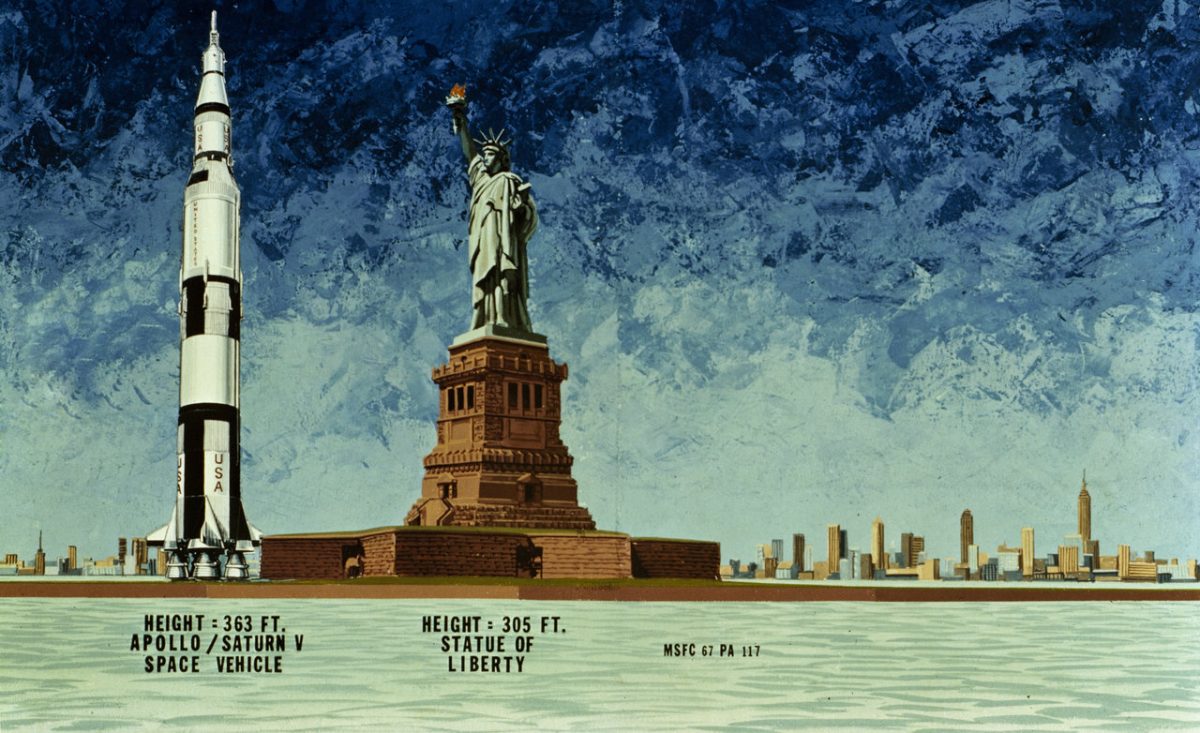 This 1967 illustration compares the Apollo Saturn V Spacecraft of the Moon Landing era to the Statue of Liberty located on Ellis Island in New York City. The Apollo Saturn V, at 363 feet towers above Lady Liberty, as the statue is called, standing at 305 feet.

“The sky turned a deep purple and all at once the stars and moon came out — and the sun shone at the same time. He had reached a layer of the upper atmosphere where the air was too thin to contain reflecting dust particles.”
― Tom Wolfe, The Right Stuff 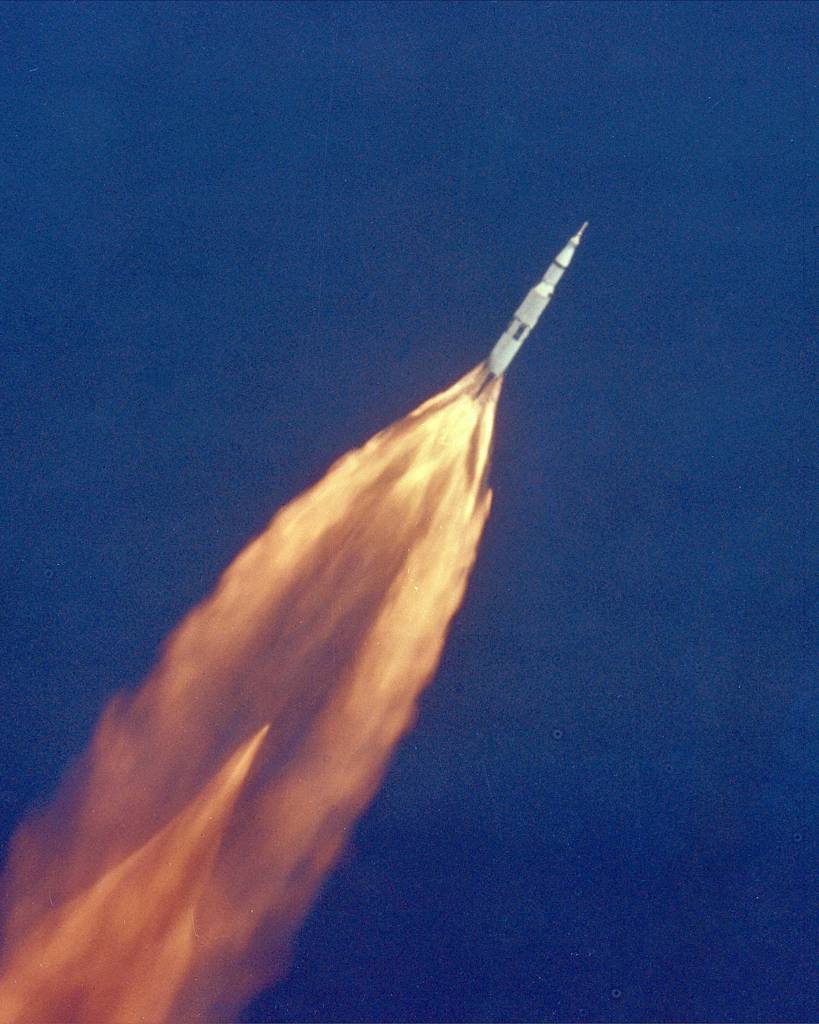 The Apollo 11 Saturn V space vehicle climbs toward orbit after liftoff from Pad 39A at 9:32 a.m. EDT. In 2 1/2 minutes of powered flight, the S-IC booster lifts the vehicle to an altitude of about 39 miles some 55 miles downrange. This photo was taken with a 70mm telescopic camera mounted in an Air Force EC-135N plane. Onboard are astronauts Neil A. Armstrong, Michael Collins and Edwin E. Aldrin, Jr. Date:7/16/1969

“If men could move out of infancy at half a mile an hour and get up to eighteen thousand miles an hour in one lifetime, well, who was to assume that the walls of the universe were safe from future men?”

― Norman Mailer, Of a Fire on the Moon 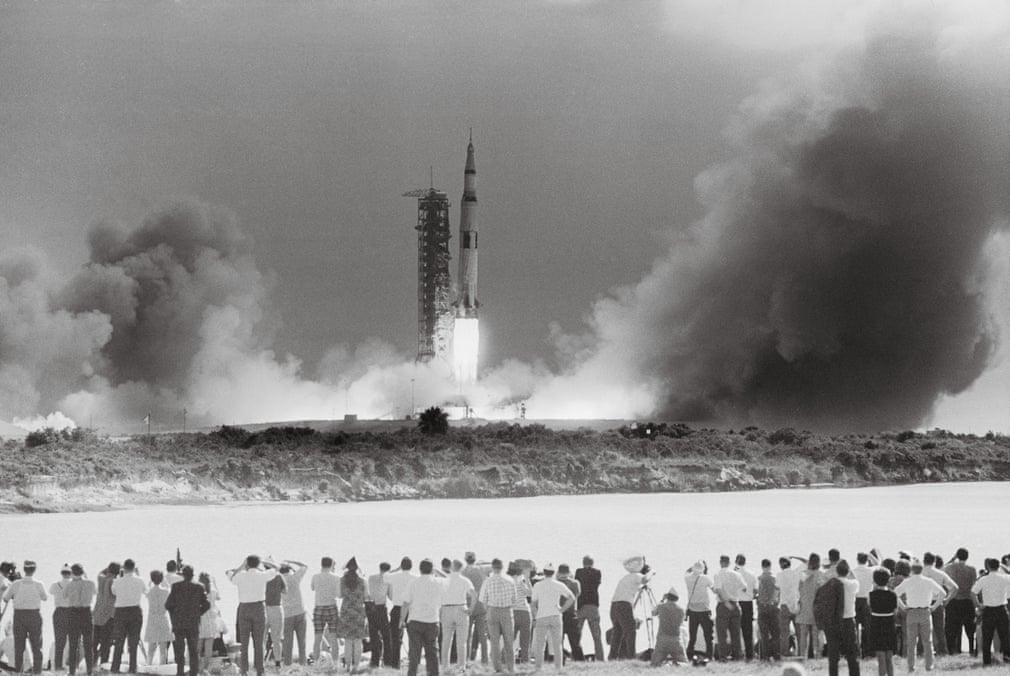 View of the Apollo 11 launch from the press area, Kennedy Space Centre in Florida on 16 July 1969
Photograph: Bettmann/Corbis/Taschen 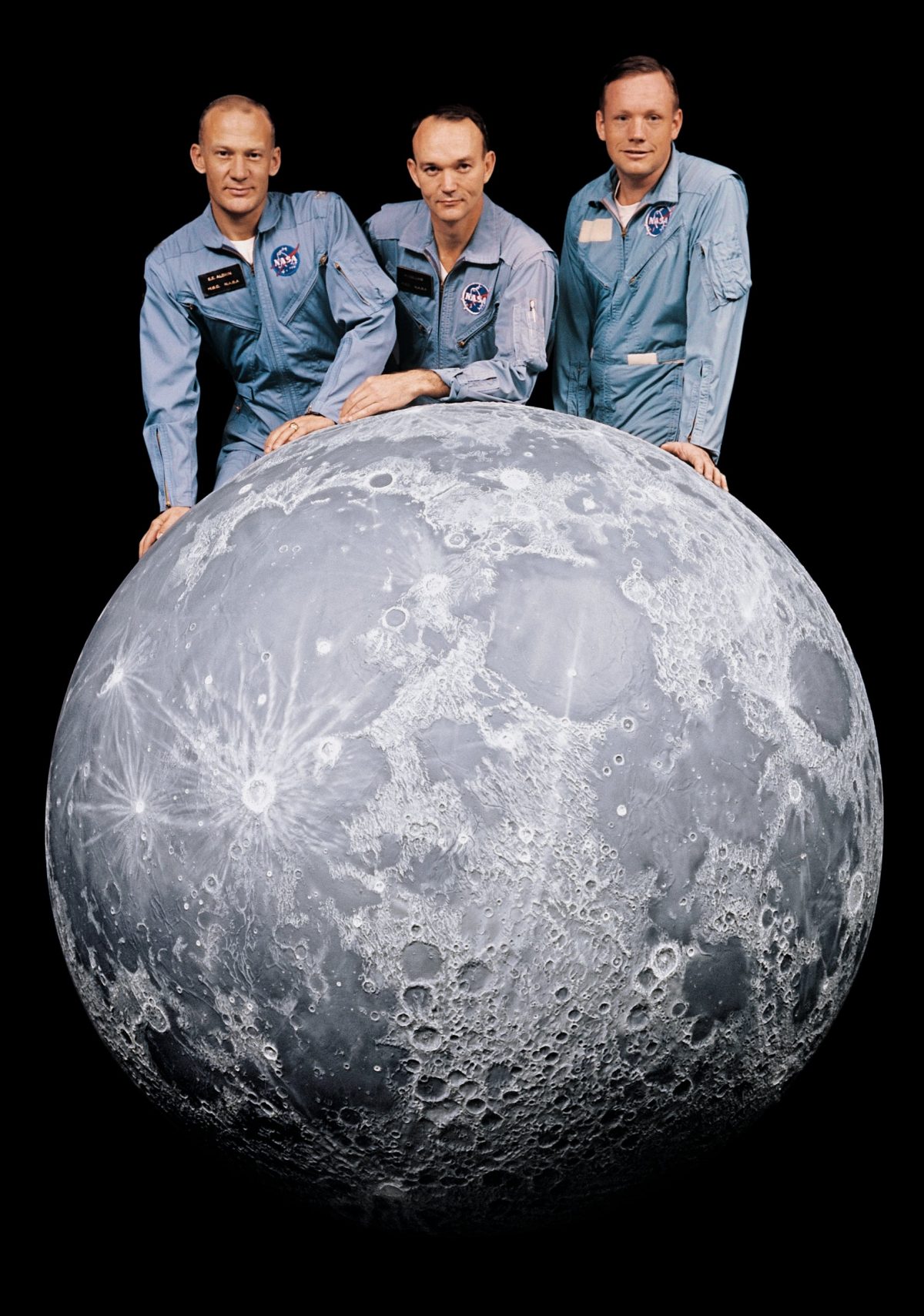 With one hand still on the ladder, he comments, “The surface is fine and powdery. I can… I can pick it up loosely with my toe.” And as he releases his catch, the grains fall back slowly to the soil, a fan of feathers gliding to the floor. “It does adhere in fine layers like powdered charcoal to the sole and sides of my boots. I only go in a small fraction of an inch. Maybe an eighth of an inch. But I can see the footprints of my boots and the treads in the fine sand particles.”

Yes, they would copy. He was like a man who goes into a wrecked building to defuse a new kind of bomb. He talks into a microphone as he works, for if a mistake is made, and the bomb goes off, it will be easier for the next man if every detail of his activities has been mentioned as he performed them.

Now, he released his grip on the ladder and pushed off for a few steps on the Moon, odd loping steps, almost thrust into motion like a horse trotting up a steep slope. It could have been a moment equivalent to the first steps he took as an infant for there was nothing to hold onto and he did not dare to fall – the ground was too hot, the rocks might tear his suit. Yet if he stumbled, he could easily go over for he could not raise his arms above his head nor reach to his knees, his arms in the pressure bladder stood out before him like sausages; so, if he tottered, the weight of the pack could twist him around, or drop him.

The powder of the Moon soil was curious indeed, comparable in firmness and traction to some matter between sand and snow.

It was time for Aldrin to descend the ladder. When he reached the ground, Aldrin took a big and exuberant leap up the ladder again, as if to taste the pleasures of one-sixth gravity all at once. “Beautiful, beautiful,” he exclaimed.

Armstrong: “Isn’t that something. Magnificent sight out here.”

― Norman Mailer, Of a Fire on the Moon 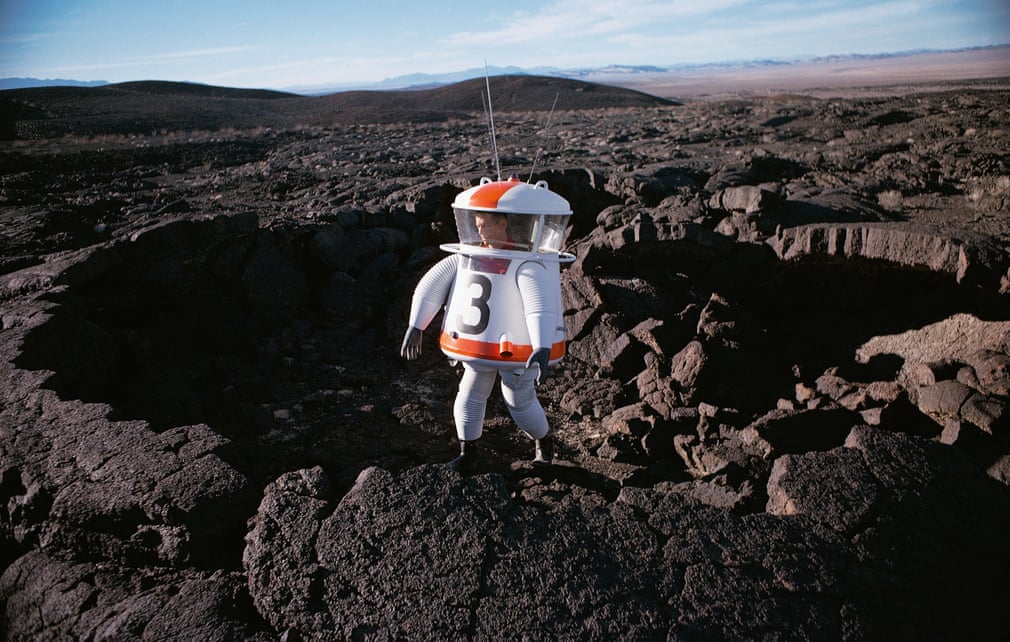 By 1962 the achievement of the Mercury mission set America’s sights on a manned moon landing. The Mercury suit, while suitable for life in side the capsule, was inadequate for extravehicular activity. Here its inventor Allyn Hazard tests a moon suit concept in a crater in the Mojave desert in California
Photograph: Fritz Goro/Time & Life Pictures/Getty Images/ Taschen

The exciting countdown to blast off and the thrilling sight of the rockets leaving the ground can be seen in this great video below, which stretches 30 seconds of action to over eight minutes of viewing time.