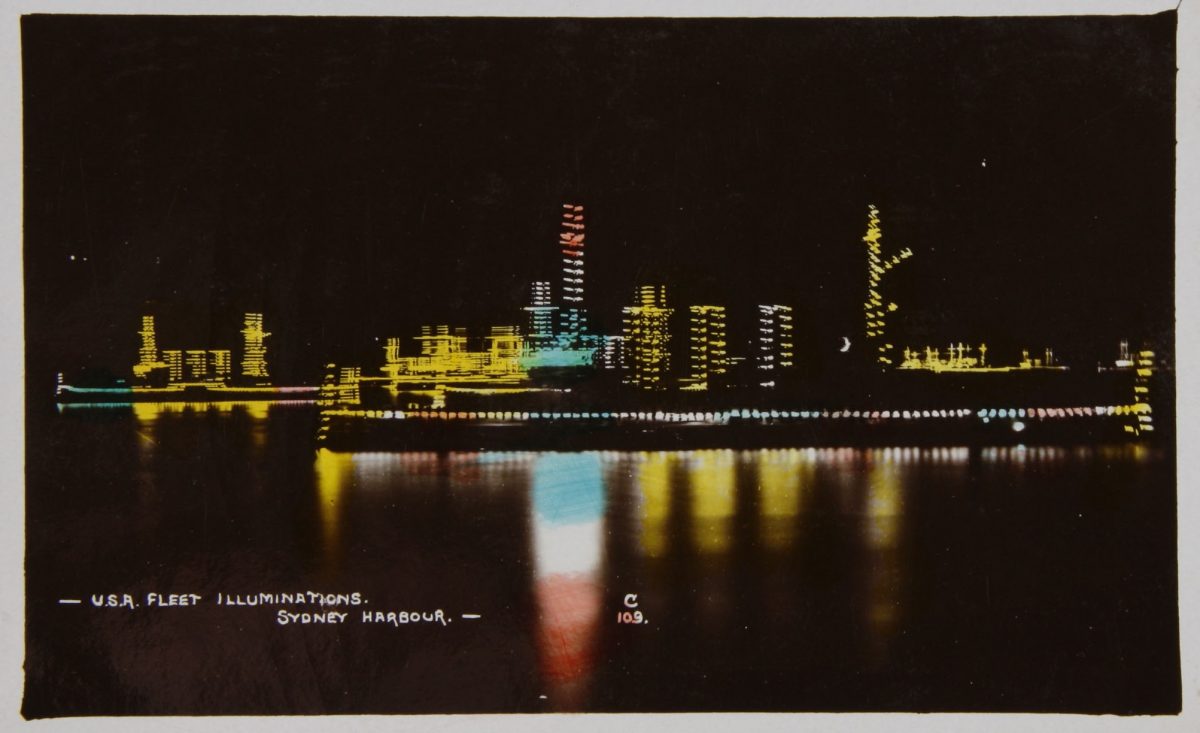 The Australian National Maritime Museum has these terrific pictures of  ‘Sydney Illuminations’, when ships, buildings and the quay were lit up to hail visiting vessels. The 1908 visit of the United States Great White Fleet was “Magnificent! Splendid! Beautiful!”, the battleships lined from bow to stern in “dazzling brilliance”.

For the International Fleet Review, new ships were illuminated on the night of 4 October 1913. The flagship HMAS Australia and light cruiser HMAS Sydney were covered by electric lights in a picture of “dazzling beauty’”. The Sydney Morning Herald was awestruck:

… every now and then the searchlights were thrown up to the sky, and it was with the clouds as with the smoke from the funnels of all the vessels in the harbour – they took on a strange beauty … And then, suddenly, all was blackness again, and the ships lay silent, grim and motionless in the Cove till 8 o’clock – and then, at a signal flashed from the flagship, the Australia and all of them burst into light, their lines, from hull to fore, and mainmast, picked out with countless electric lights. It was a veritable blaze of splendour. 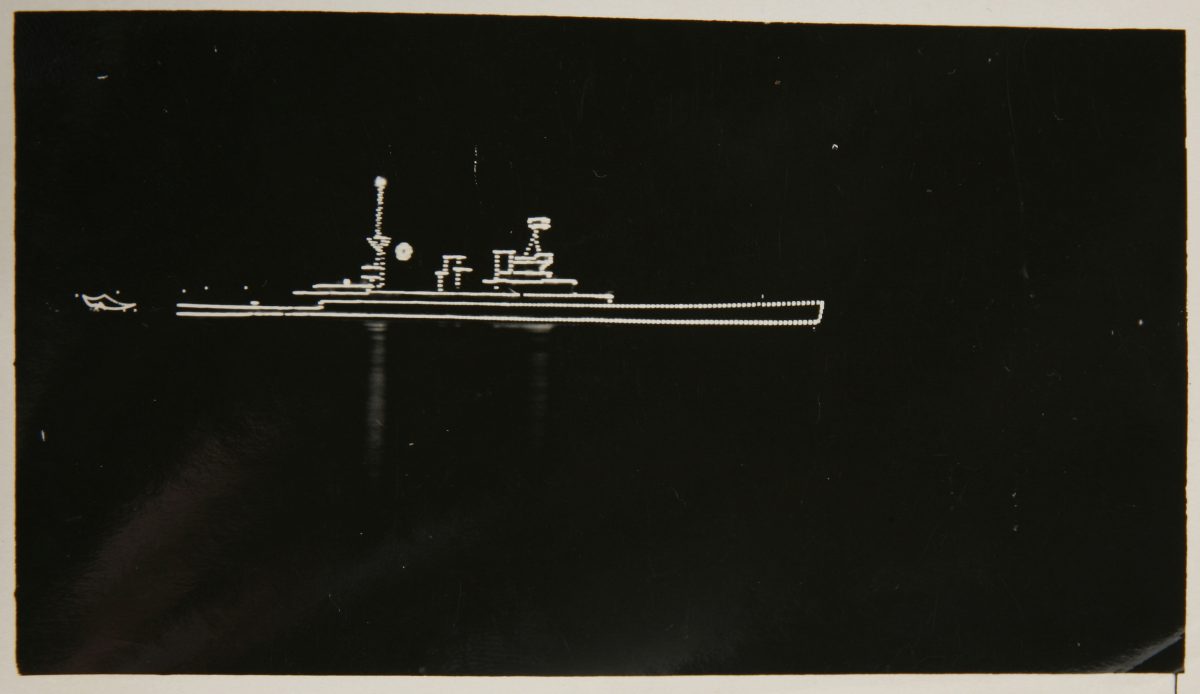 HMAS AUSTRALIA I outlined with lights (1913)

You see the part in the aforementioned report that notes “all was blackness”? Historians of naval history will read those words and recall Lieutenant-Commander Thomas Woodrooffe (1899–1978), a British naval officer, broadcaster and writer who in his 1937 commentary of the Spithead Review for the BBC saw the fleet vanish. “At the present moment, the whole fleet is lit up,” he said. “When I say ‘lit up’, I mean lit up by fairy lamps.” The ships were not half as lit up as Woodrooffe, who was suspended by the BBC for his well-lubricated performance. For those of you unaware of Woodrooffe’s finest hour, I’ve included it below:

At the present moment, the whole fleet is lit up. When I say ‘lit up’, I mean lit up by fairy lamps.

Now, if you’ll follow me through … if you don’t mind … the next few moments… you’ll find the fleet doing odd things (indistinct, but that’s my best guess). At the present moment, the New York, obviously, is lit out … and when I say the fleet is lit up … in lamps… I mean, she’s outlined. The whole ship’s outlined. In little lamps.

I’m sorry, I was telling some people to shut up talking.

Umm.. what I mean is this. The whole fleet is lit up. In fairy lamps, and … each ship is outlined.

Now, as far as I can see is about … I suppose I can see down about five or six miles … ships are all lit up.

In a second or two, we’re going to fire rockets, um, we’re going to fire all sorts of things (indistinct). And.. you can’t possibly see them, but you’ll hear them going off, and you may hear my reaction when I see them go off. Because … erm … I’m going to try and tell you what they look like as they go off. But at the moment there’s a whole huge fleet here. The thing we saw this afternoon, this colossal fleet, lit up … by lights … and the whole fleet is in fairyland! It isn’t true, it isn’t here!

I’m trying to give you, ladies and gentlemen, (indistinct) the fleet’s gone. It’s disappeared. I was talking to you … in the middle of this damn (cough), in the middle of this fleet … and what’s happened is the fleet’s gone, disappeared and gone. We had a hundred, two hundred warships around us a second ago, and now they’ve gone, at a signal by the Morse code, at a signal by the fleet flagship which I’m in now, they’ve gone, they’ve disappeared. 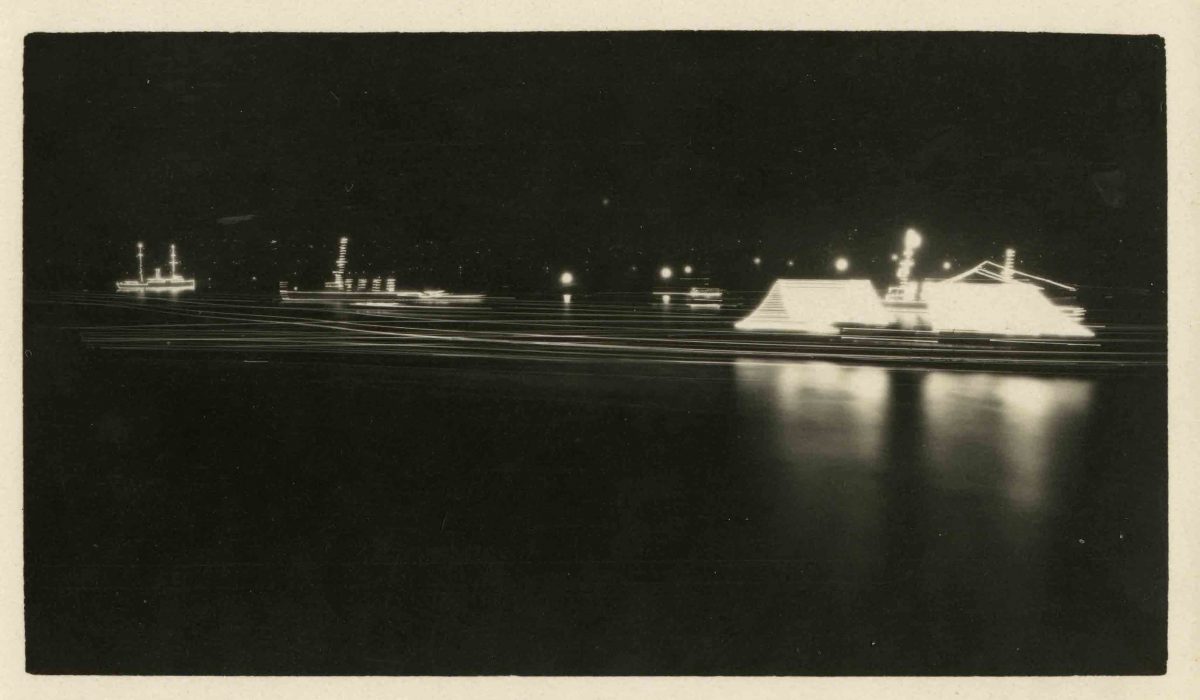 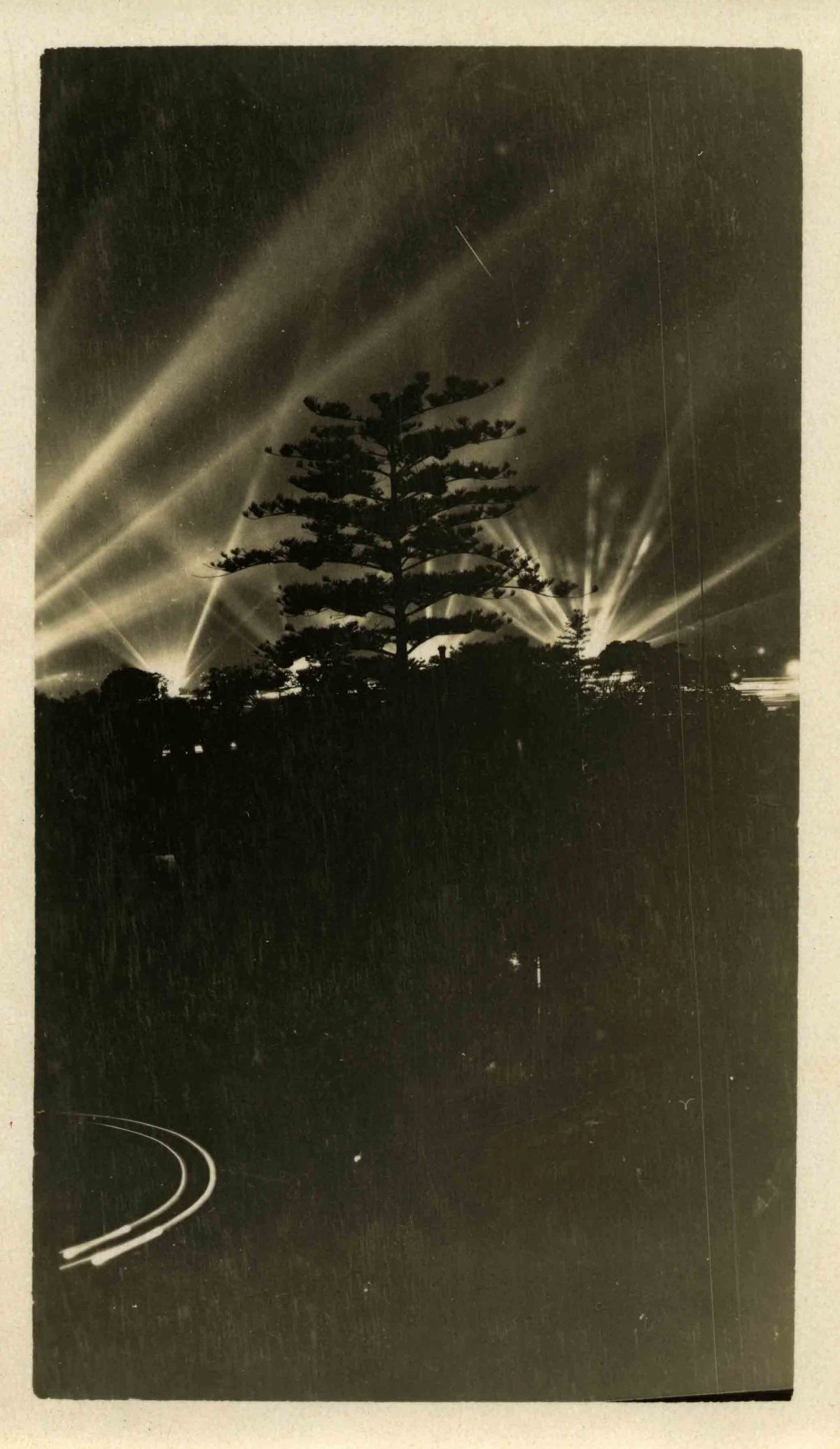 In December 1907 United States President Theodore Roosevelt sent the US Atlantic Battle Fleet of 16 battleships, all painted white in peacetime colours, on a 14 month goodwill cruise around the world. The voyage came at a time of tense relations between Japan and America and gave the US an opportunity to demonstrate its blue-water naval capabilities as well as strengthen diplomatic ties. The fleet arrived in Australia on 20 August 1908. 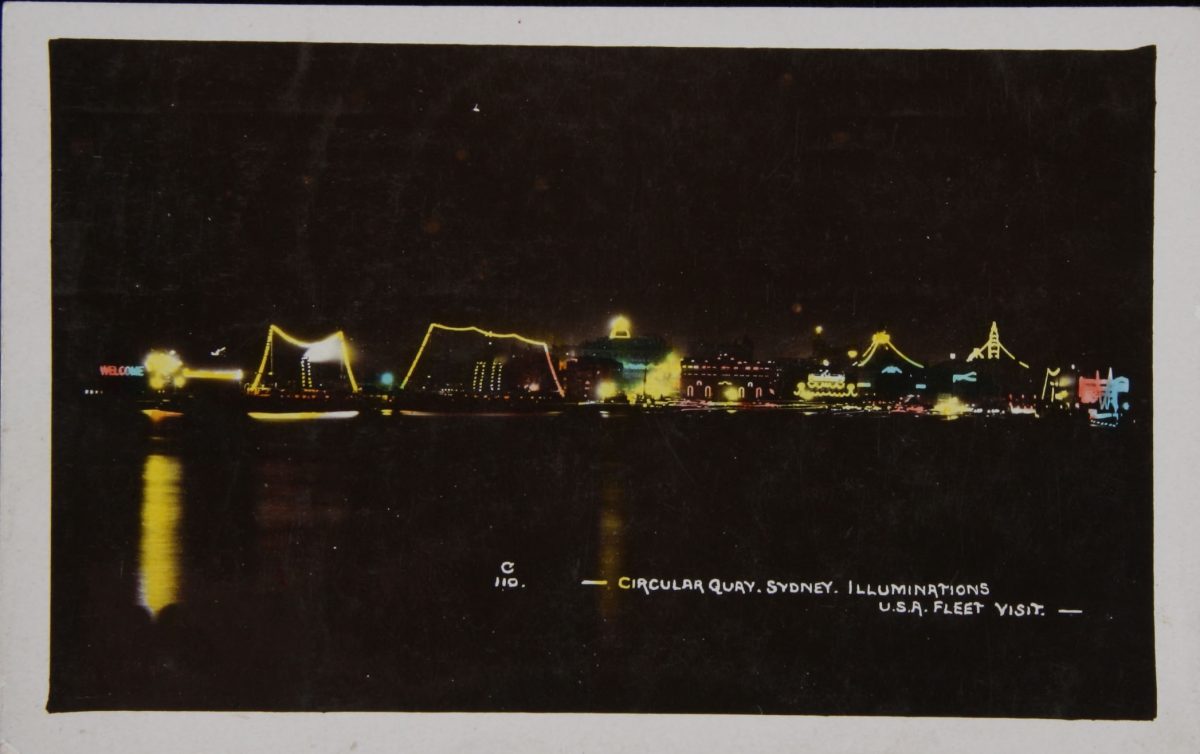 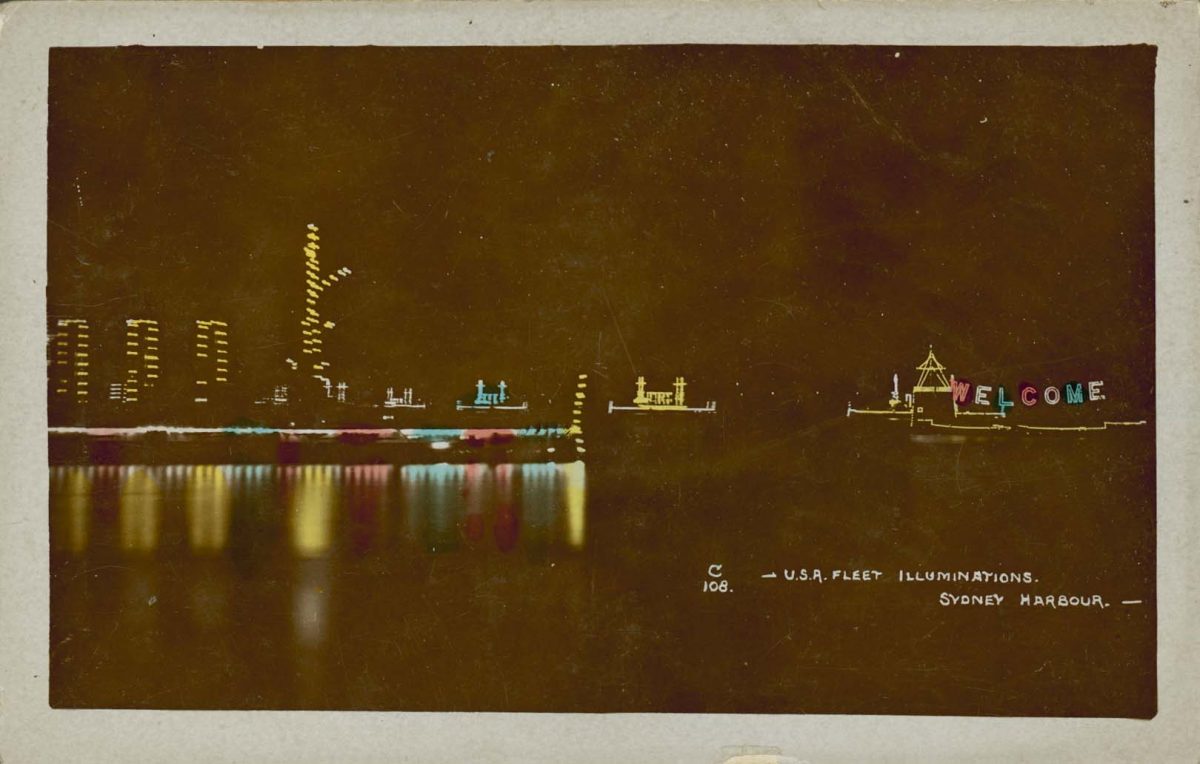 USA Fleet illuminations in Sydney Harbour
This black and white photographic postcard depicts a night time view of two ships from the United States Great White Fleet and Fort Denison, illuminated in Sydney Harbour. The lights have been hand coloured – 1908 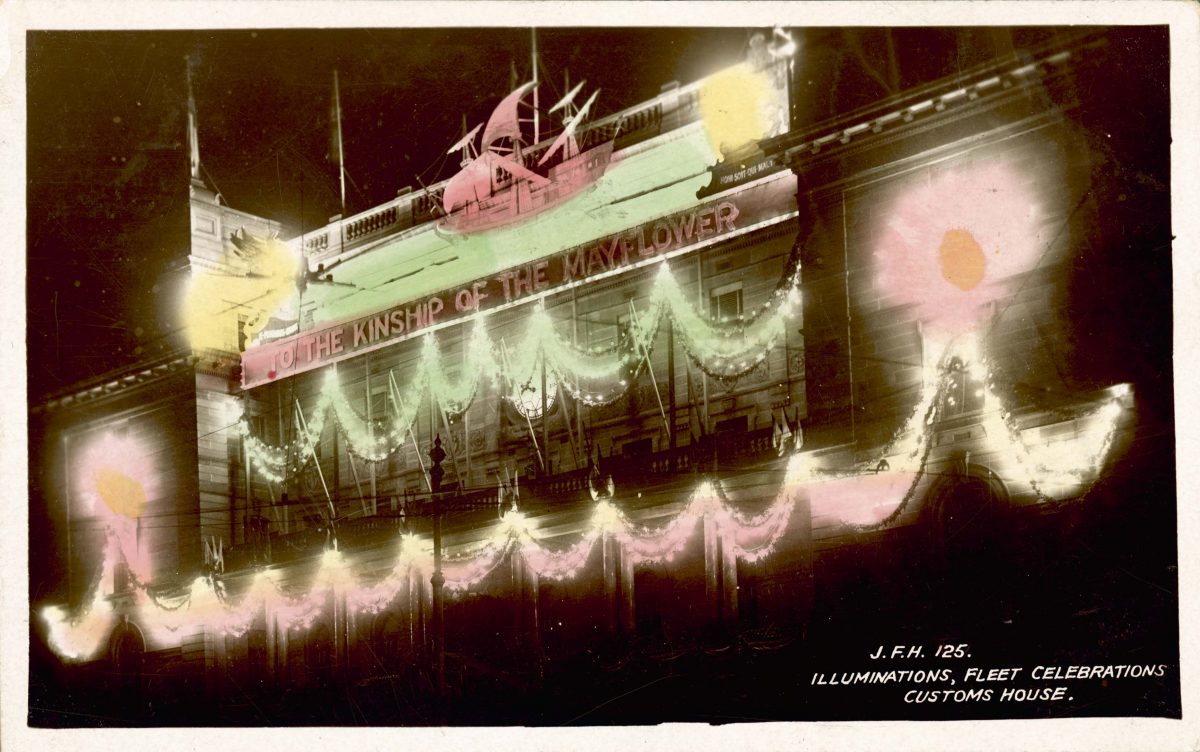 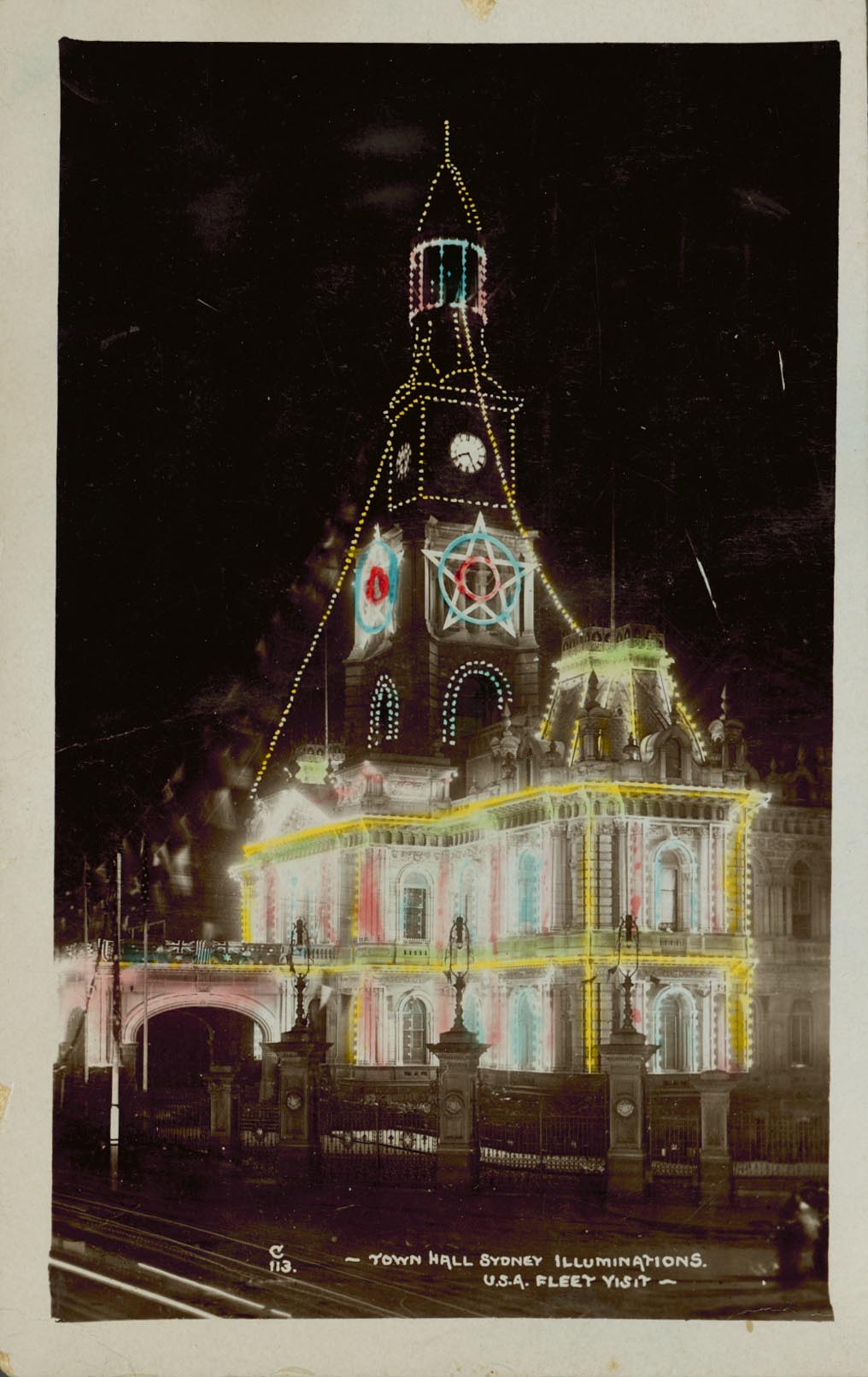 Sydney Town Hall Illuminations during the USA Fleet visit
In December 1907 United States President Theodore Roosevelt sent the US Atlantic Battle Fleet of 16 battleships, all painted white in peacetime colours, on a 14 month goodwill cruise around the world. The voyage came at a time of tense relations between Japan and America and gave the US an opportunity to demonstrate its blue-water naval capabilities as well as strengthen diplomatic ties. The fleet arrived in Australia on 20 August 1908. 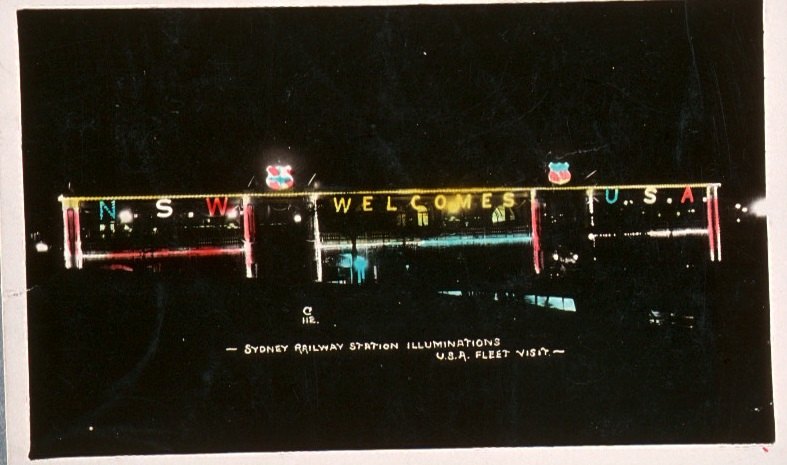 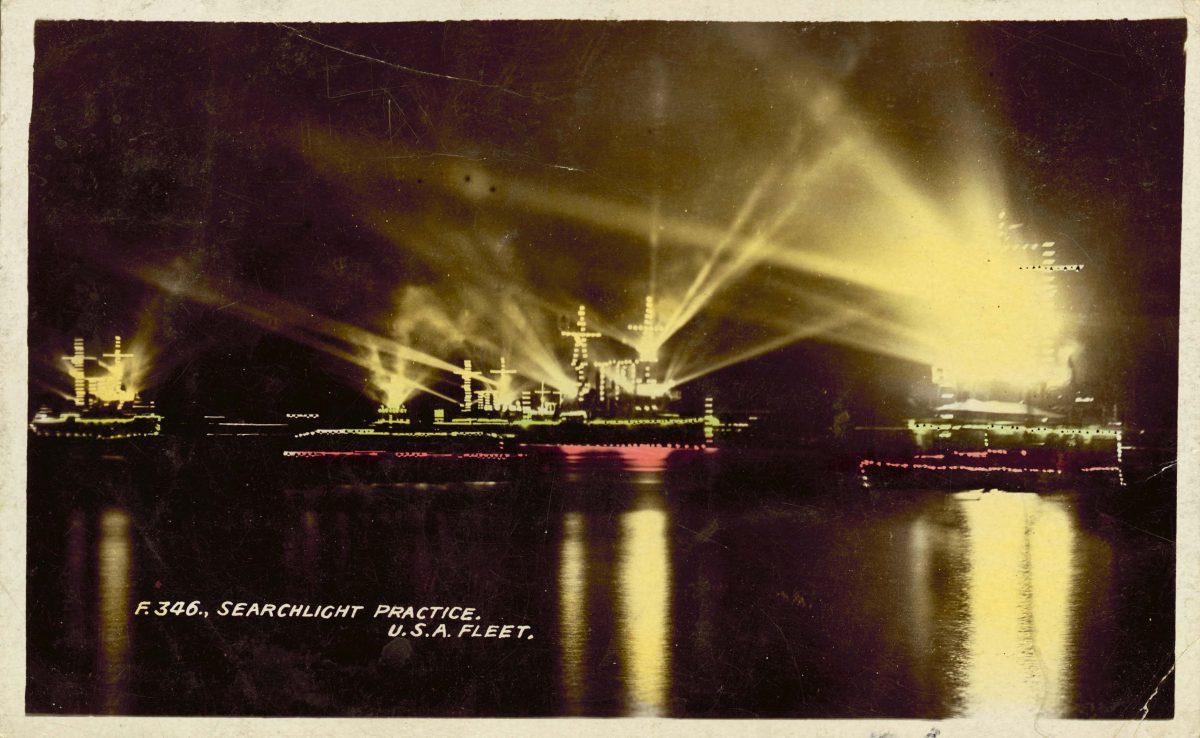 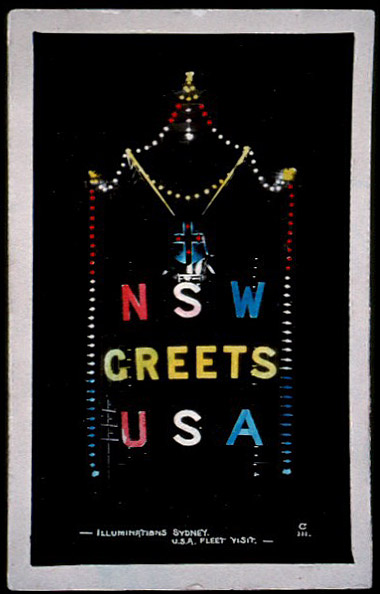 NSW greets USA – Sydney illuminations
This hand coloured photograph commemorates the visit of the United States Great White Fleet to Australia in 1908. It depicts a night-time view of a building in Sydney with the illuminated sign ‘NSW greets USA’. The postcard has been captioned ‘Illuminations Sydney, USA Fleet visit’. Hundreds of postcards were produced as souvenirs of the visit and were purchased by both American sailors and Australian spectators. 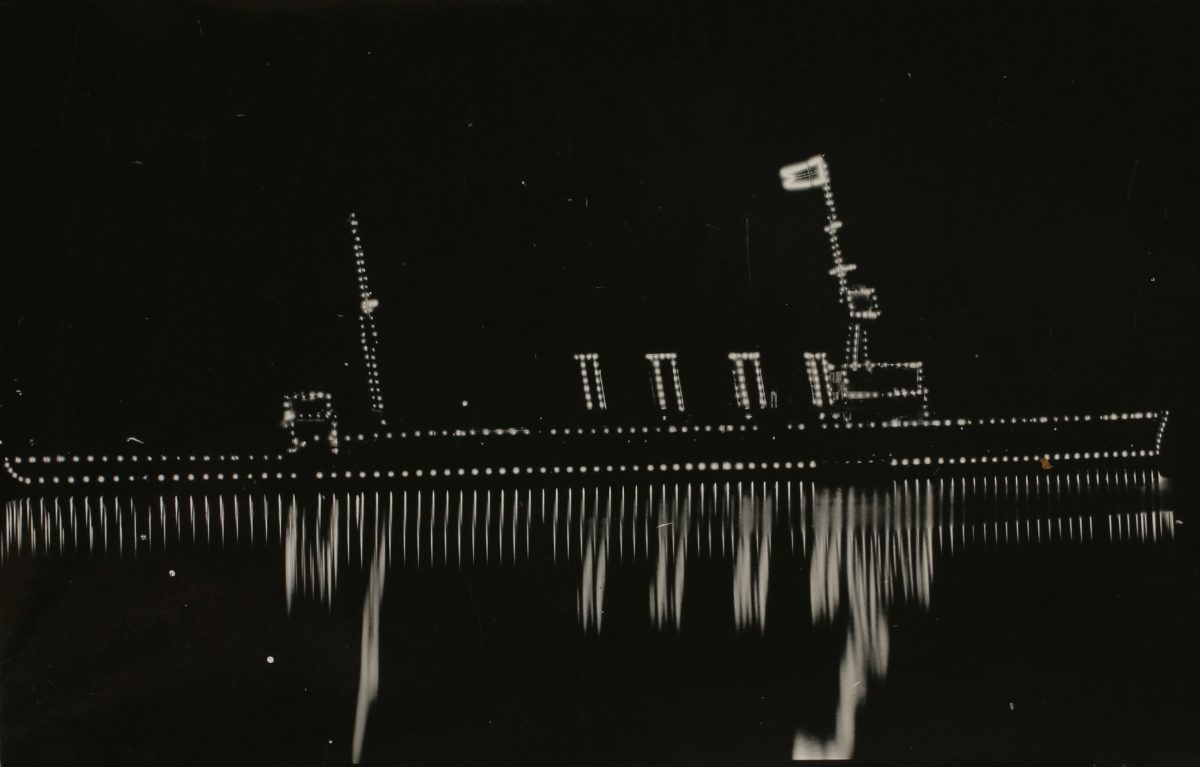 Via: The Australian National Maritime Museum