THE NEW YEAR has arrived.  Time to once again pledge to stop eating like a starved cow and get going on a weight loss program.   Catalogs and magazines in decades past were full of wonderfully terrible options to start you on the Grand New Year’s Tradition of Fitness Plans Doomed to Failure.  Let’s have a look at a few. 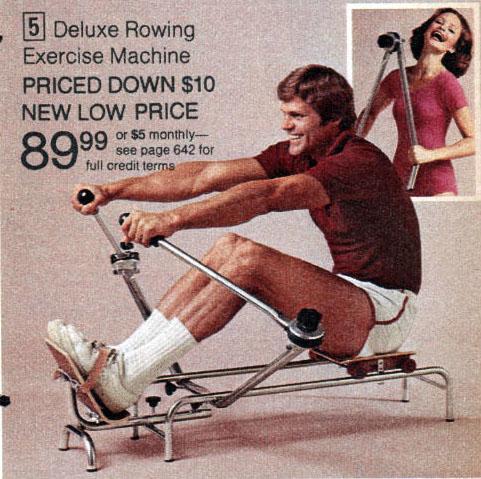 This rowing machine has a truly unique component.  The kinetic energy derived from the rowing motion is transmitted across a thin wire to a vibrating diamond shaped object which induces an intense orgasm for the woman holding it.  An ingenious incentive for wives to motivate their husbands to get in shape. 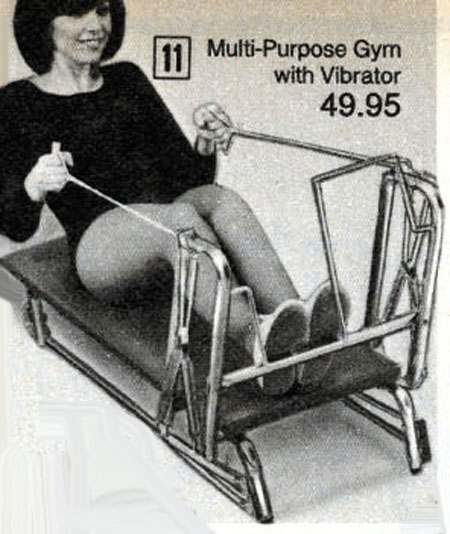 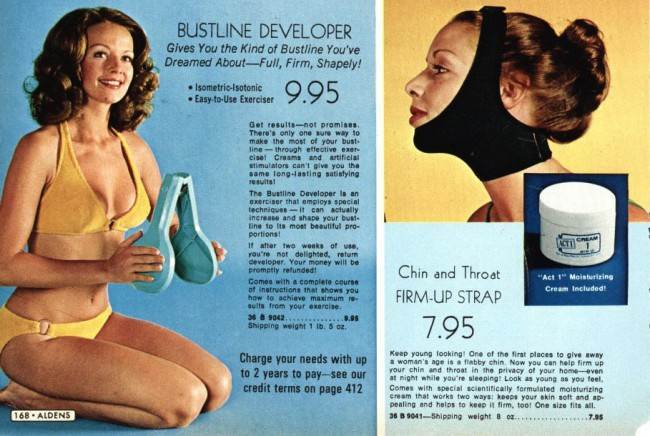 I’m going to hazard a guess that squeezing plastic won’t actually give you bigger breasts.  I’m also going to go out on a limb and say that cream smudged on a chin strap won’t rid you of neck fat.  No need to reimburse me for the money I just saved you.  Your thanks are enough. 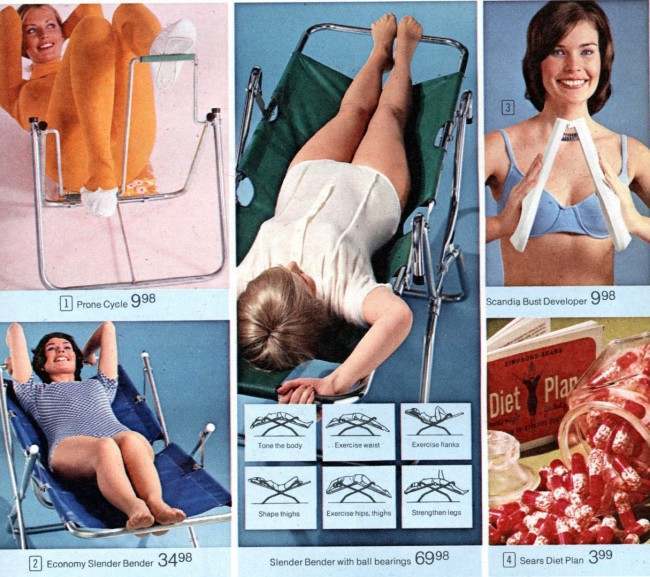 When the Prone-Cycle and Economy Slender Bender won’t get the job done, there’s always option #4 – The Sears Diet Plan.

What is the Sears Diet Plan you ask?  It’s a strenuous and demanding physical regimen of daily workouts, calisthenics, and……  who am I kidding?  It’s a jar full of amphetamines.

Physical fitness basically boils down to (1) self-restraint when it comes to what you stuff in your gullet and (2) actually utilizing your muscular system for something beyond walking to and from your television.  Both require a good bit of denial and inconvenience, and you will probably get sweaty. 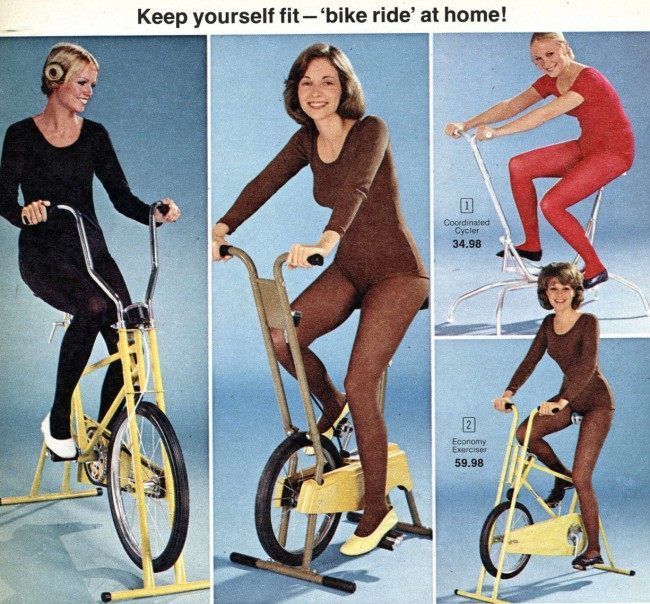 The stationary bike has become famous for its propensity to quickly transition from workout machine to clothes hanger.

The process happens thusly: After a few weeks of inactivity, the stationary bike remains in your room – a daily guilty reminder that you should be working out.  Eventually, you become accustomed to its menacing presence and start draping clothes on it.  Before long, it ceases being fitness equipment and is now officially a garment hanging device. 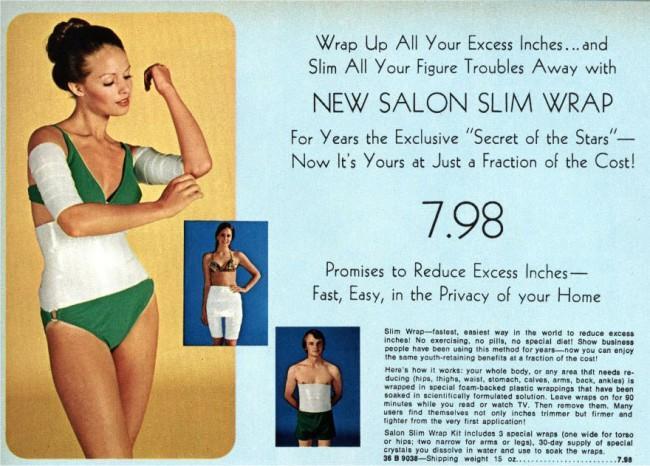 How long will it take humanity to realize that sweat is not fat?  It would be great if we perspired fat (although, our clothes would get rather nasty).  But we don’t.  What will it take for mankind to understand this concept? 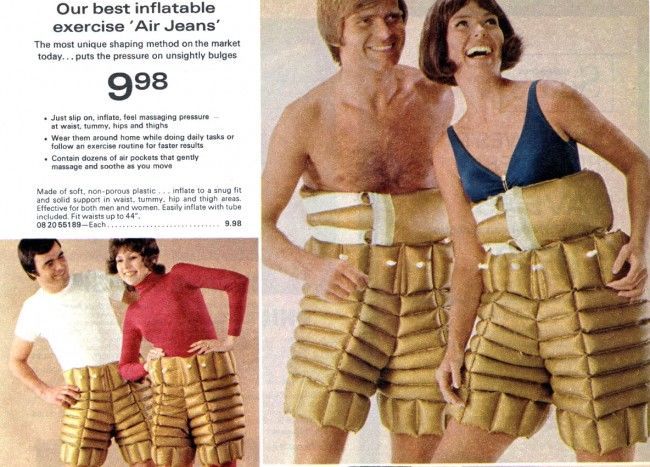 The so-called “air jeans”, “sauna suits” and “trim jeans” were surprisingly popular back in the day.  Many will recall the Monty Python sketch “Trim Jean Theater”.

“This new series of ‘Trim-Jeans Theatre Presents’ will enable you to enjoy the poetry of T. S. Eliot whilst losing unsightly tummy bulge….. Thrill to Thomas a Becket’s Kierkegaardian moment of choice while making your physique tighter, firmer, neater.”

I don’t want to be unfairly critical.  After all, anything is better than being sedentary.  That being said, this “leg beauty kit” is incomprehensibly stupid. 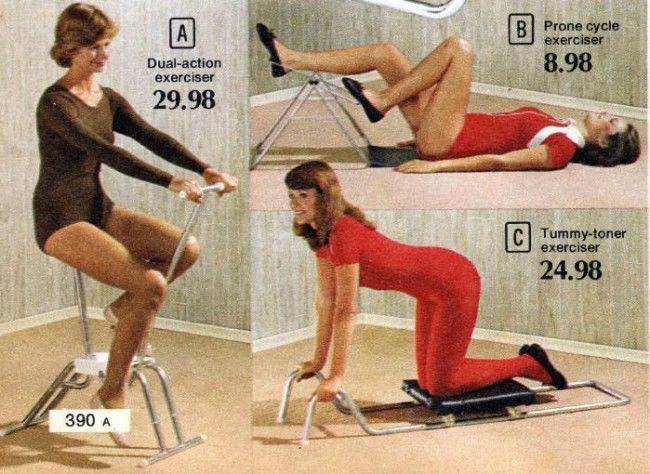 Also in the interest of fairness, equipment is sold today which is every bit as ridiculous.  I’ll wager you can find everything in this article on sale now.  They’ve been refigured, re-purposed, and re-named, but they’re still here. 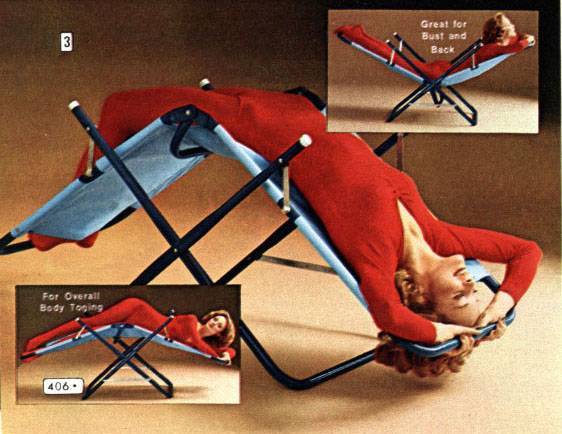 I can’t imagine it was effective at anything except for inspiring delight among male observers.

I miss the multiple exposure technique commonly used to use to illustrate how something works.  Here it is again, but with something extra… 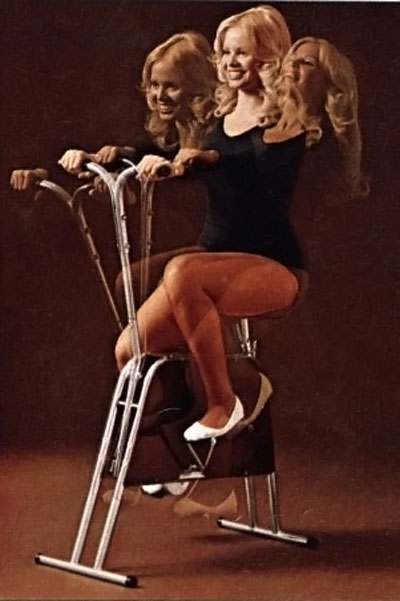 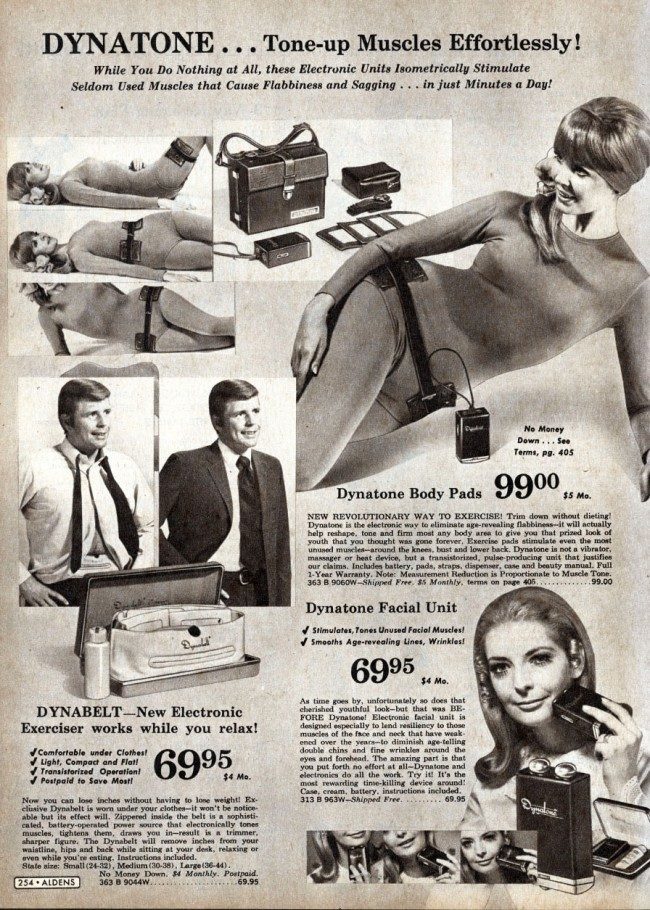 You may feel lighter with a Dynatone, but it’s only because your wallet is now empty.  These products are expensive!  This ad is from 1970, so adjusted for inflation the $99 body pads roughly equate to $600 (£362) today. 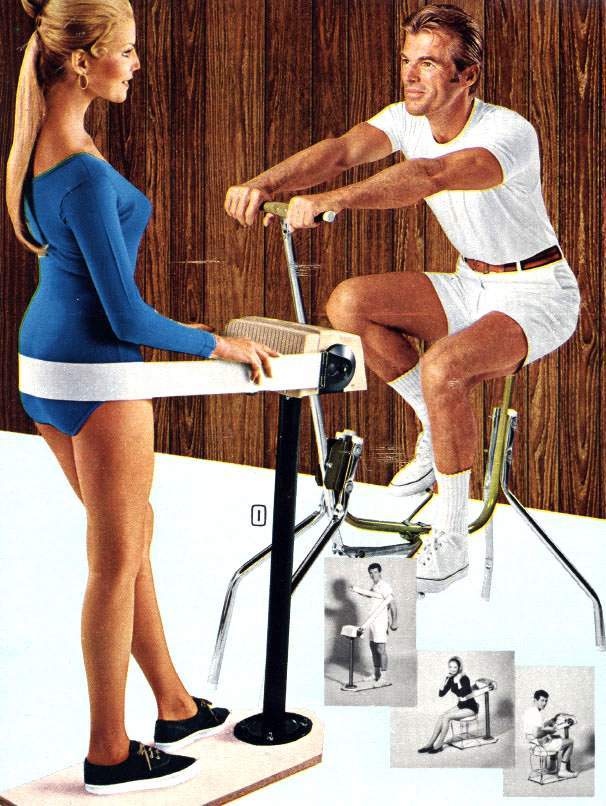 Ladies, if you’re at a gym and a strange man parks his workout bike inches away and stares unblinkingly into your eyes, do not play nice.  Look for a clearly marked exit sign, and run like hell.  This man is clearly dangerous. 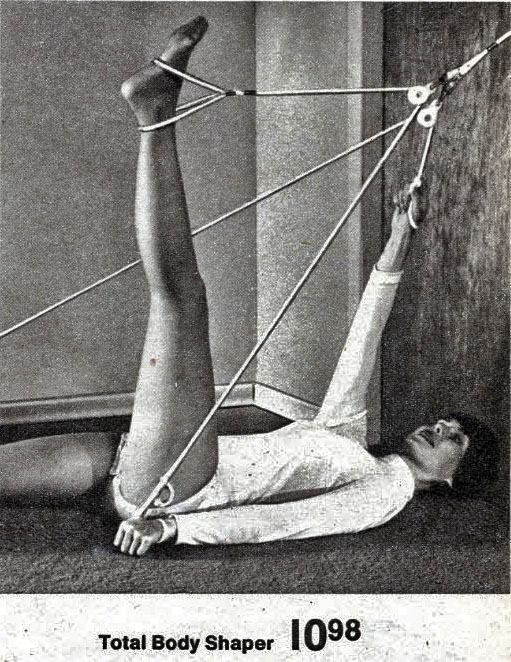 With these old contraptions, sometimes it’s hard to tell if we’re looking at a fitness product advert or a photo shoot for a bondage fetish magazine.  Of course, there’s no reason to assume it can’t be both. 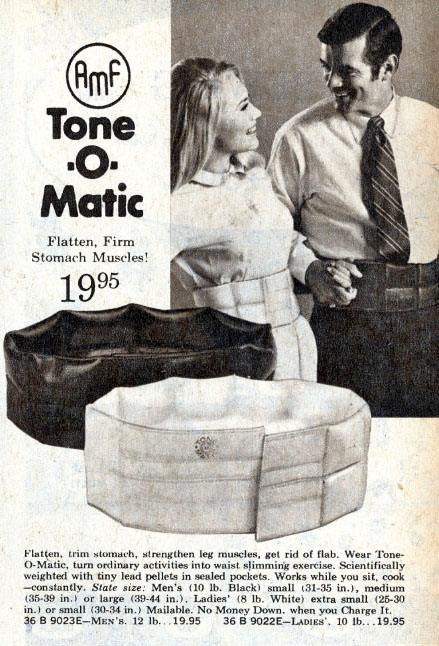 Given the look of the Tone-O-Matic along with the sauna shorts, scary chin strap, and salon wrap, we can safely assume people weren’t as self-conscious in the 1970s.

Indeed, they were willing to try anything, no matter how foolish looking or exorbitant the price – and the trend continues to this day with similarly disappointing results.  But don’t give up hope. If none of these wonderful devices stick and another New Year’s fitness resolution seems to be falling by the wayside, just remember: You can always get Ayds. 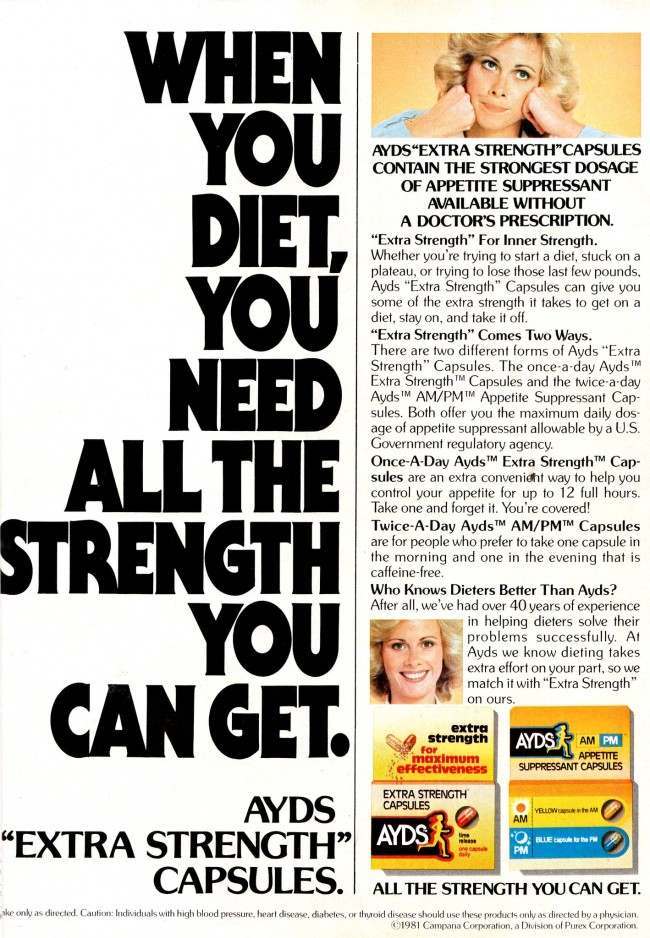