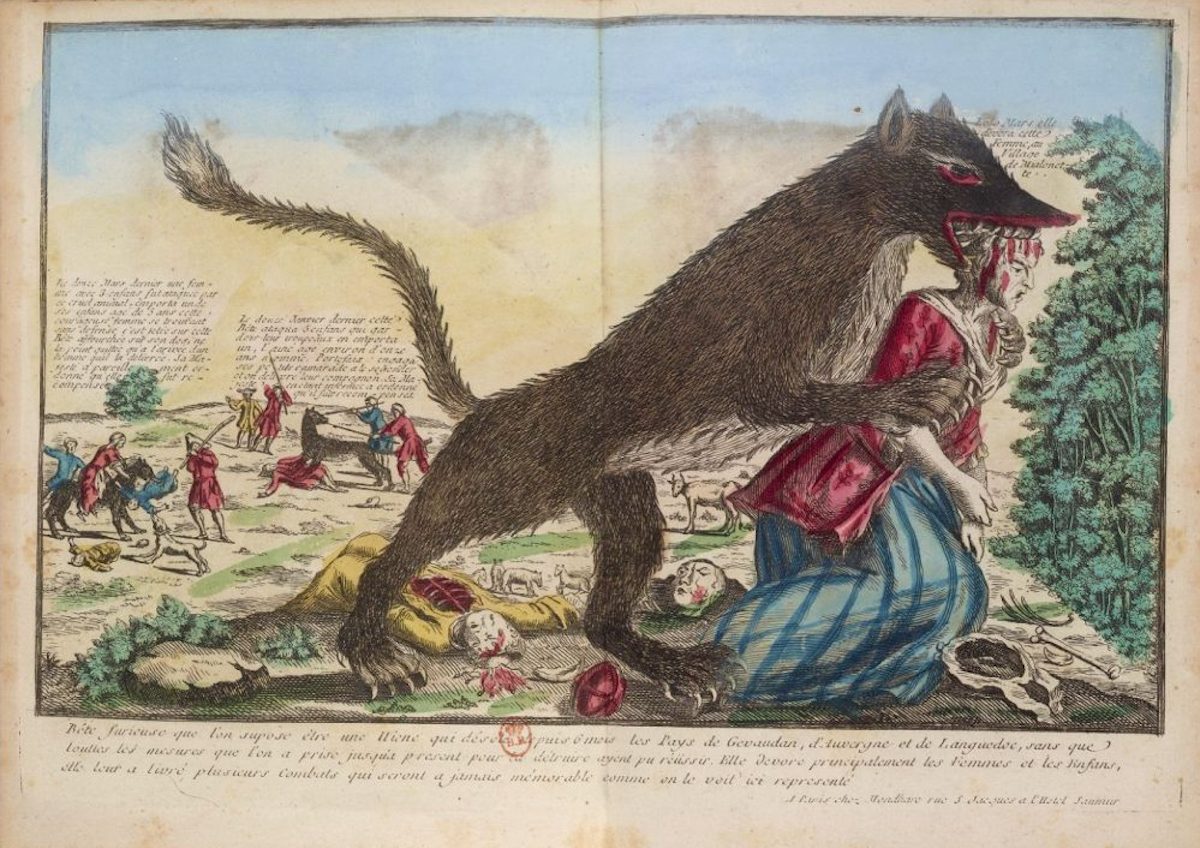 “We have doomed the wolf not for what it is, but for what we deliberately and mistakenly perceive it to be” wrote naturalist Farley Mowat, “the mythologized epitome of a savage ruthless killer – which is, in reality, no more than a reflected image of ourselves.” The fear of wolves in the European psyche dates back over a millennium, during which time wild populations of wolves were slaughtered until the animals had gone all but extinct on the continent by the early 20th century.

In France, wolf-killing became an official state function under Charlemagne in the 800s, with the formation of the louveterie, wolf hunters who operated (with a few years off after the Revolution) until the late 1880s. Would it be presumptuous to speculate that the routine killing of wolves contributed to a panic about werewolves that lasted from the early medieval period into the 18th century? This phenomenon was so pronounced in France at its peak that it has warranted a historical title: The French Werewolf Epidemic. 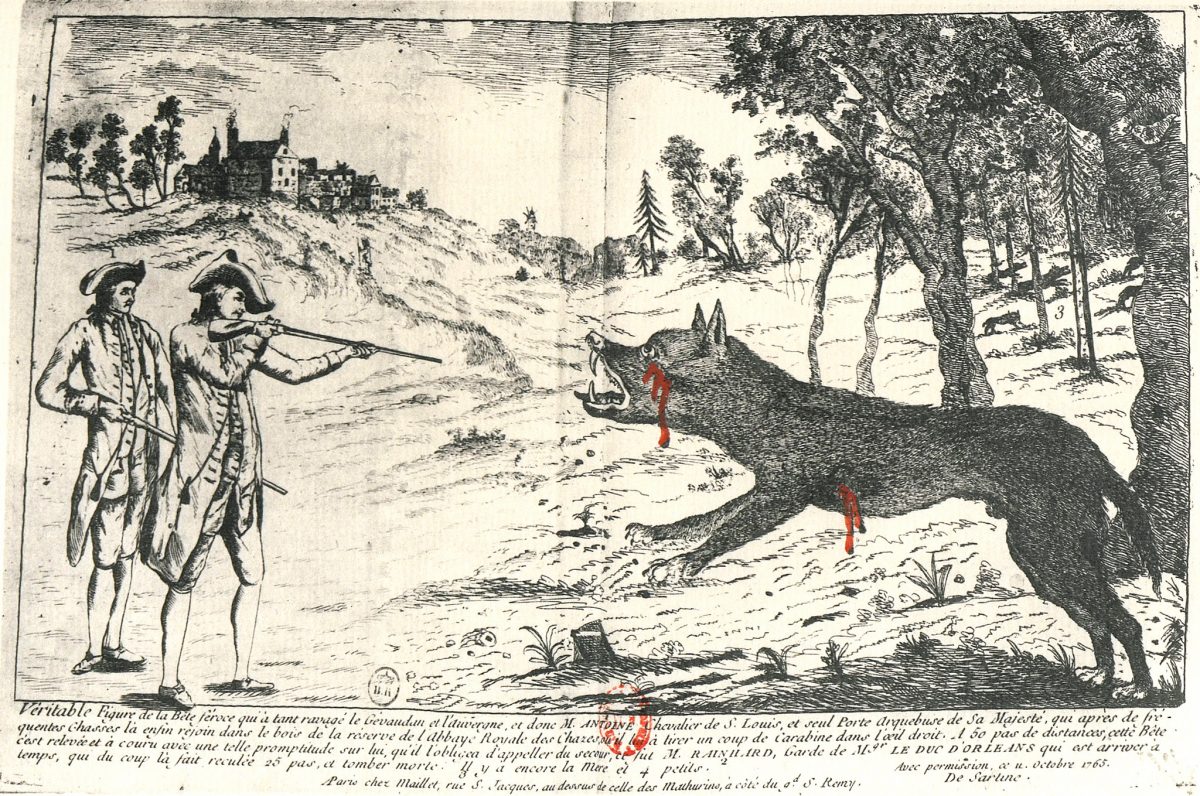 As Dangerous Minds notes, the period between roughly 1520 and 1630 saw “France’s version of Europe’s witch trials and executions, but with werewolves. For 110 years, 30 thousand people were accused of being werewolves, tortured in exchange for their confessions, or lack of admission of guilt, and died at the stake.” The panic persisted long afterward. In the most famous case of wolf terror, La Bête du Gévaudan, or the Beast of Gévaudan, supposedly killed and partially ate over 100 people in the span of three years, beginning in 1764.

The many attacks over the centuries attributed to werewolves or some kind of supernaturally vicious and powerful creature were often the result of human killers or of other kinds of animals. But the descriptions of the Beast of Gévaudan remain consistent over the course of dozens of eyewitness accounts, as do the injuries sustained by its victims. Its attacks became so frequent and concerning that Louis XV offered up a bounty for its head. Something was indeed killing dozens of people in Gévaudan, but it wasn’t a werewolf. 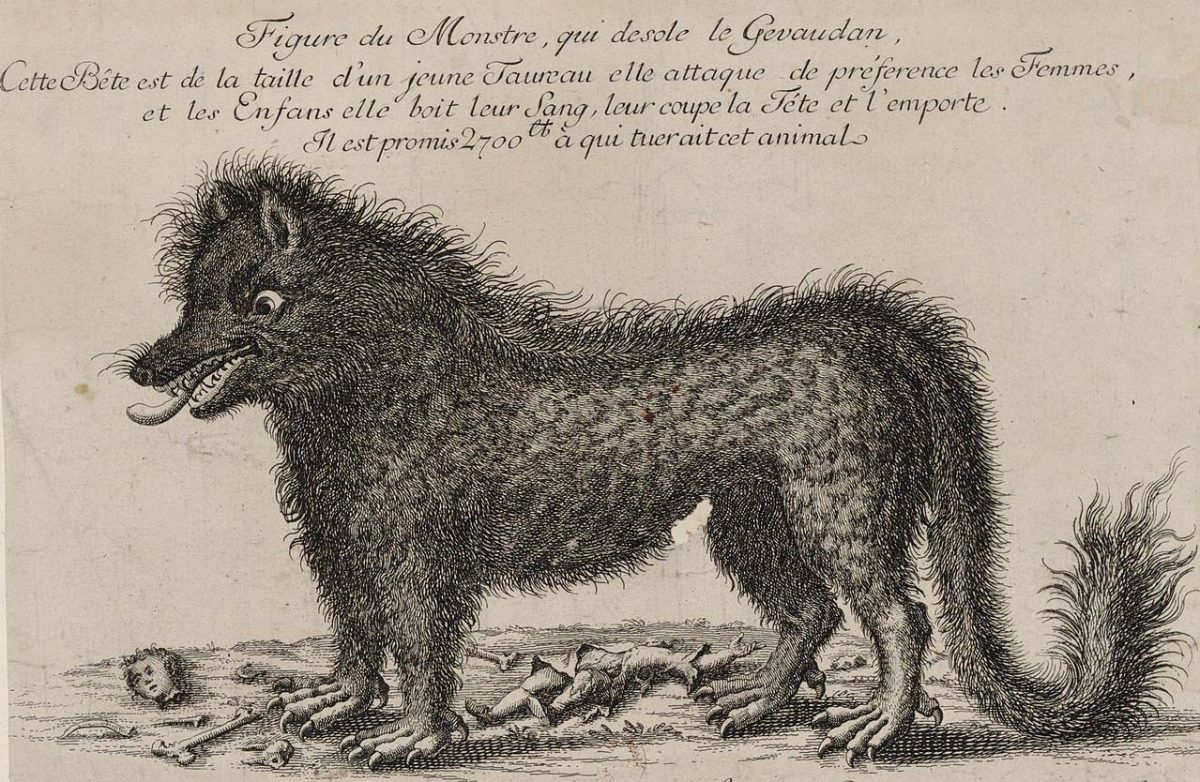 Beliefs about the Beast’s true nature have ranged from “a single enormous wolf,” John Knifton writes, perhaps infected with rabies, to “a number of wolves in a single pack… some type of enormous domestic dog, or perhaps even a wolf dog hybrid.” Between 1764 and 1767, half a dozen wolves were killed and said to be the Beast. Some historians have seen a hyena in the descriptions of its attacks, while German biologist Karl-Hans Taake argues it was most certainly a young male lion. Whatever the Beast was, its legend contributed to the ongoing werewolf panic in France and beyond.

Other wolf attacks, like those reportedly committed by a rabid wolf in Normandy, also fed the legend, one that ultimately traces back to myth. “Norse sagas tell of people changed into wolves,” writes Normandy Then and Now, “and the Vikings brought these stories with them to Normandy. Here in the Middle Ages werewolf legends follow three main themes: the dead and damned, evil spirits at play and the living sinner.” All of these themes wove through the persecutions of suspected werewolves, and they also traveled to New France with Québecois settlers in the 17th and 18th centuries. 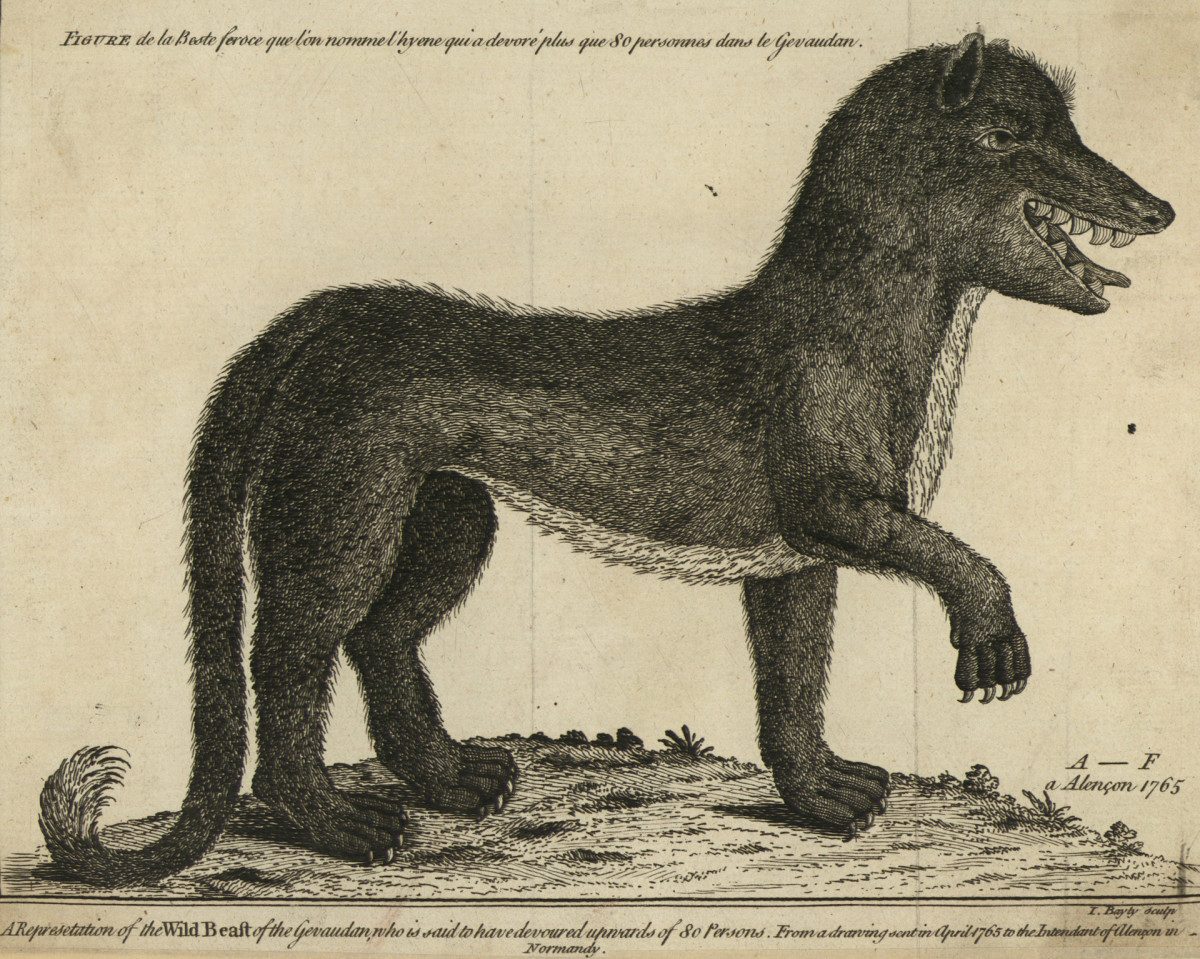 “There’d been sightings of werewolves in New France since the 1600s,” Canadiana explains. “the creatures must have come over from France… or, at the very least, the stories about them did.” French settlers brought the werewolf with them to “the edges of their empire.” In the 1760s, newspapers warned of a werewolf disguised as a beggar, possibly making his way to Montreal. “It is recommended to the Public to be cautious of him,” the editors of the Gazette de Québec warned, “as it would be of a ravenous Wolf.”

Terror swept the colony and hunting parties set out to find and kill the beast. We are not far here, perhaps, from the Canadian image of the wolf which Mowat confronted two-hundred years later: “the mythologized epitome of a savage ruthless killer—which is, in reality, no more than a reflected image of ourselves.” 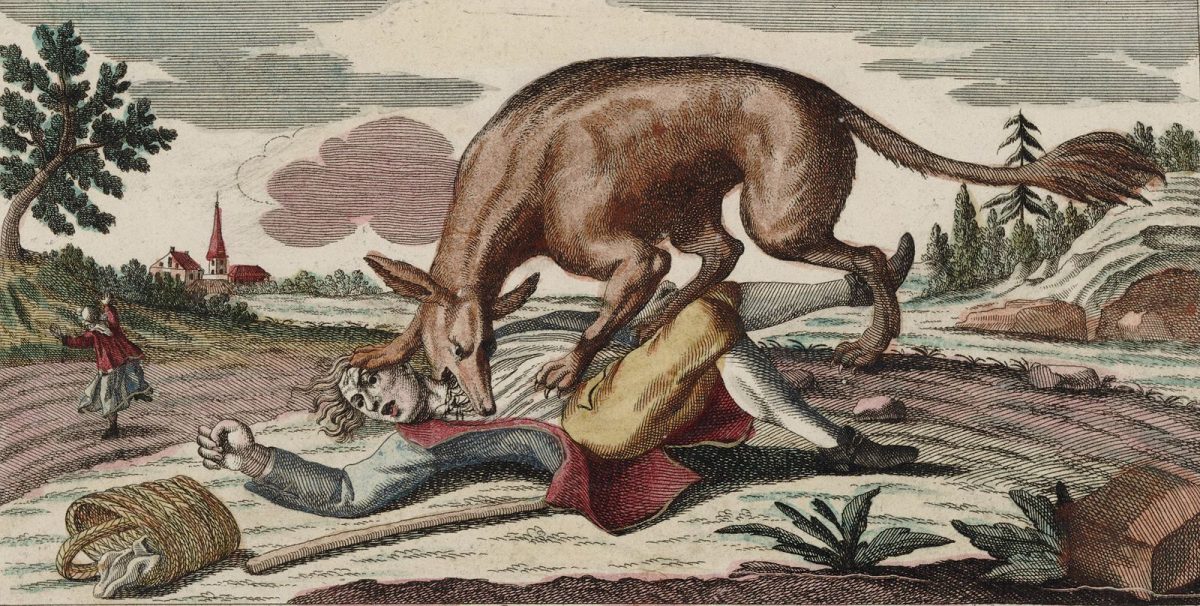 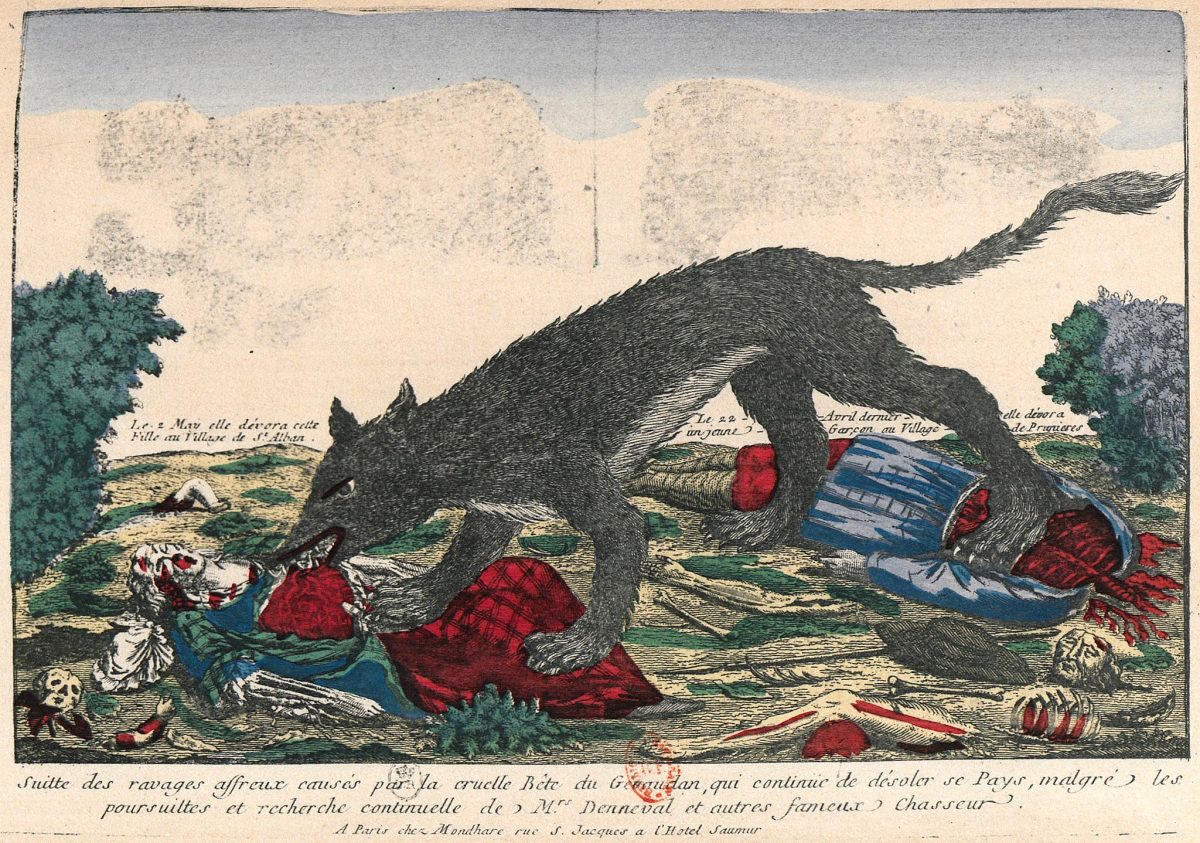 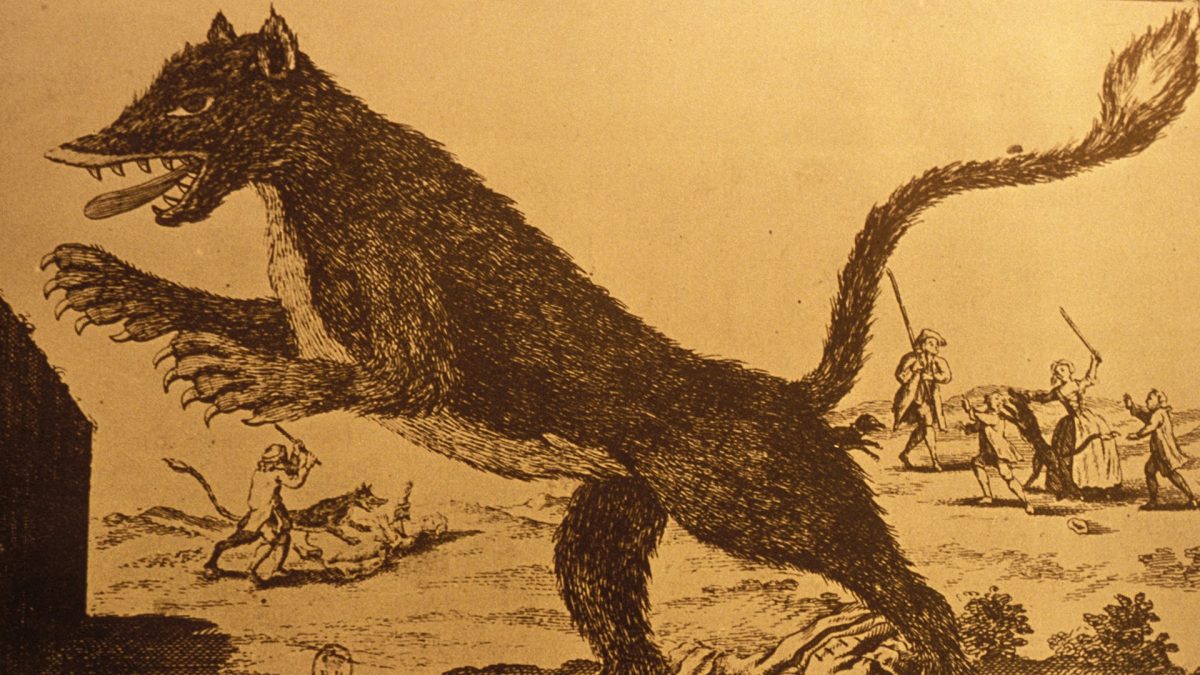 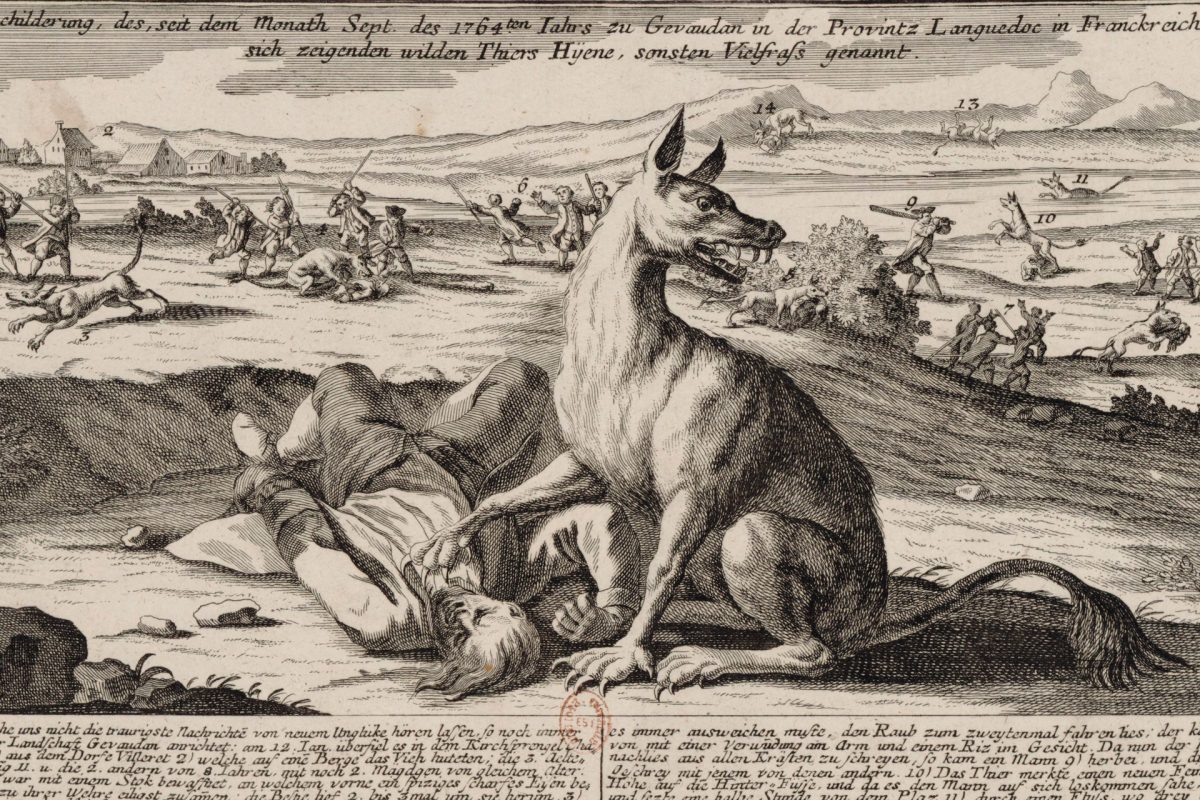 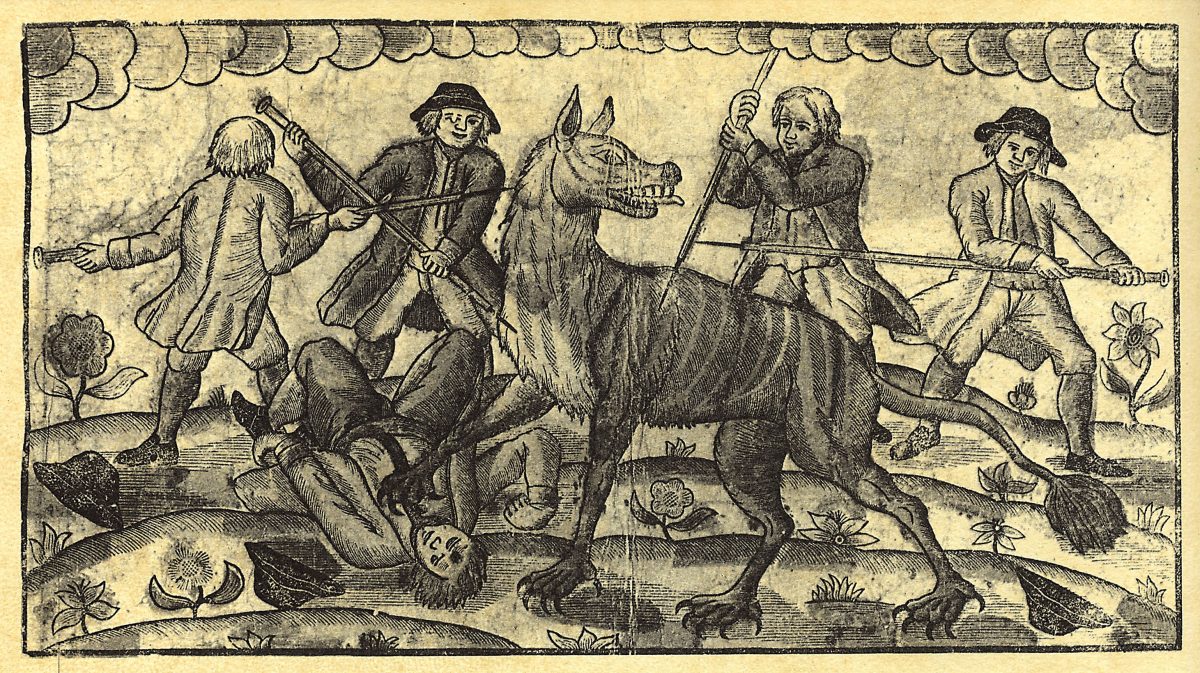