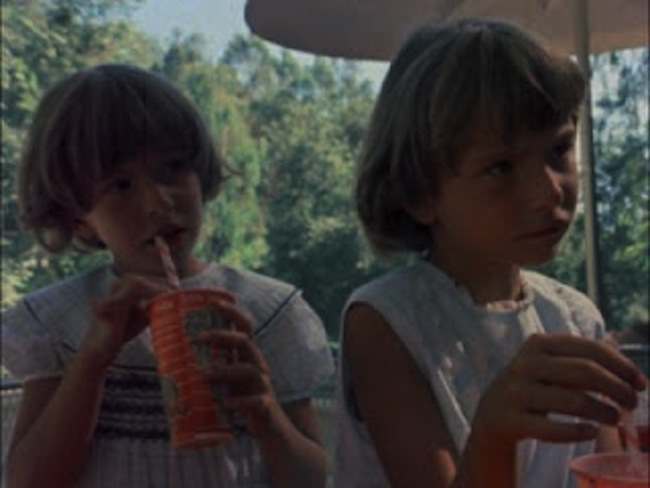 POTO and Cabengo were Grace and Virginia Kennedy. In 1976, these San Diego twins were eight years old. Jean-Pierre Gorin created a study of the girls who spoke in their own secret language. Time magazine produced an extract of their dialogue:

But was it a secret language? Their father thought the girls’ gibbering fools, mentally negligible and not worthy of educating. He was wrong. Advised to place them in speech therapy, their teacher realised they were speaking a language only they understood. 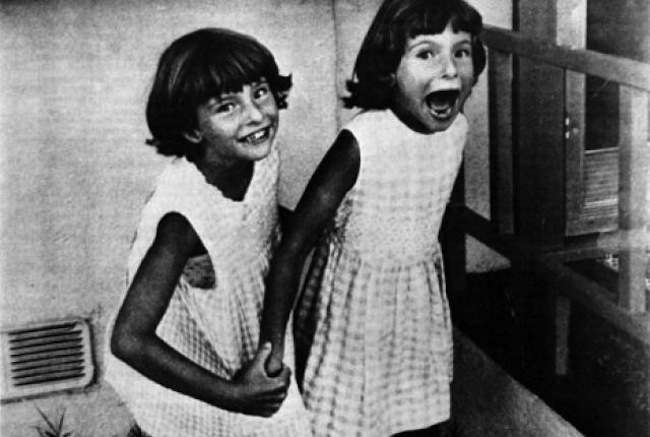 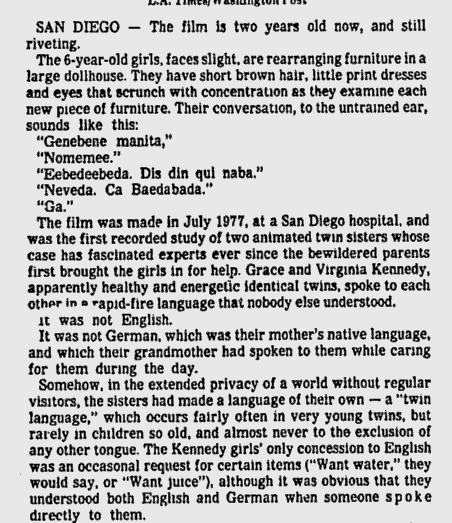 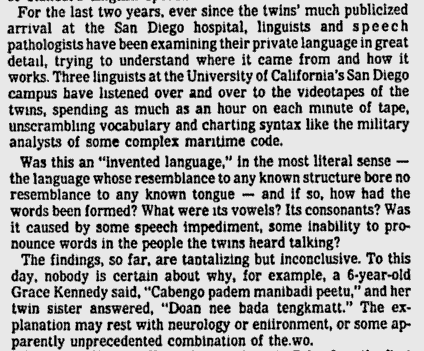 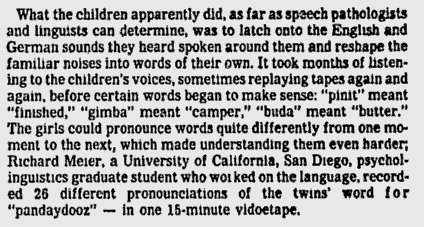 A low-budget independent film, shot in San Diego in 1979, in 16mm color negative. It’s an investigation, a film “around” an event—the case of the Kennedy twins. They were front page news at the time, as it was believed they had invented a “private language,” a private mode of communication, with a syntax and a vocabulary of its own. But this kind of an answer seems to frame Poto and Cabengo as a classical documentary…

I got hold of the event through the press. It was the middle of the summer and news was sparse. The Loch Ness monster had been nowhere in sight that year, and I suspect the journalists felt the twins would be a good substitute. They built up a case which reeked of Wild Child mystique. The very day I saw the first article on the twins, Eckardt Stein from ZDF was passing through town and I sold him the idea of a film. I lied through my teeth, told him that I had seen the twins, seen the therapists who took care of them at Children’s Hospital, secured the rights to the story. I assured Stein that they spoke a “private language.” He agreed to do the film. But when I saw the twins for the first time I immediately realized that the story as the press—and by then, myself—had cast it was not there. There was no private language and never had been. All along the twins had spoken a Creolized language, some densely unintelligible American/English, a patchwork of southern lingo spoken by their father and of the deformations imposed on the English language by their German-born mother.

The story had become bigger than the girls.

I got excited by the idea of inquiring about something which had never been there in the first place, which had been so completely misconstrued. It seemed like an eminently dramatic premise: two kids who moved and sounded like hummingbirds, who for years had been privately deciphering the world for each other, who did not know why they had suddenly become the object of so much attention, and who by now were for the therapists and linguists just two rather “ordinary” kids with banal problems of auditory information processing, while the press was still “Ripleying” their case to death. At the same time their parents were desperately hoping to convert their 15 minutes of Warholian celebrity into some hard cash. It seemed pretty interesting to try to unravel all these conflicting interests at work below the surface of this event. And don’t forget to add me, the filmmaker, to the stew: me, with my own agenda, trying to get a film out of this whole situation.

What happened to the girls?

The only clue is from a show about twins that aired on TLC around 2000, which reported that Virginia and Grace were still developmentally disabled. We are told this:

Now approaching 30, the twins continue to experience speech problems and mental delays. Grace, who has achieved a higher level of functioning than her sister, works at a McDonald’s cleaning tables and mopping. Virginia works at a job-training center and performs assembly-line work.