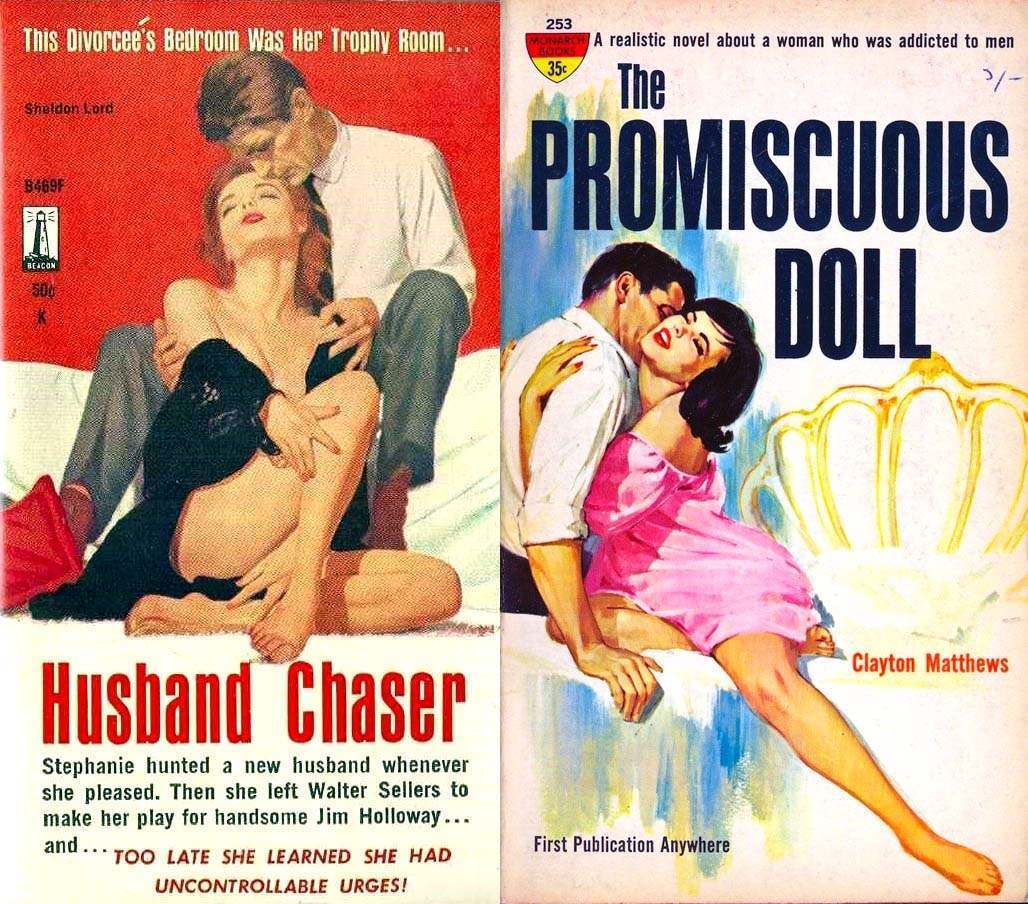 To list every vintage paperback featuring husband chasers, saucy secretaries, and teen temptresses would fill up the internet.  Suffice it to say, the bad girl paperback was a genre unto itself in the 1950s-1960s.  It’s interesting to note that for a time when feminine modesty and prudence were held in such high esteem, there sure was a lot to read about trashy women! 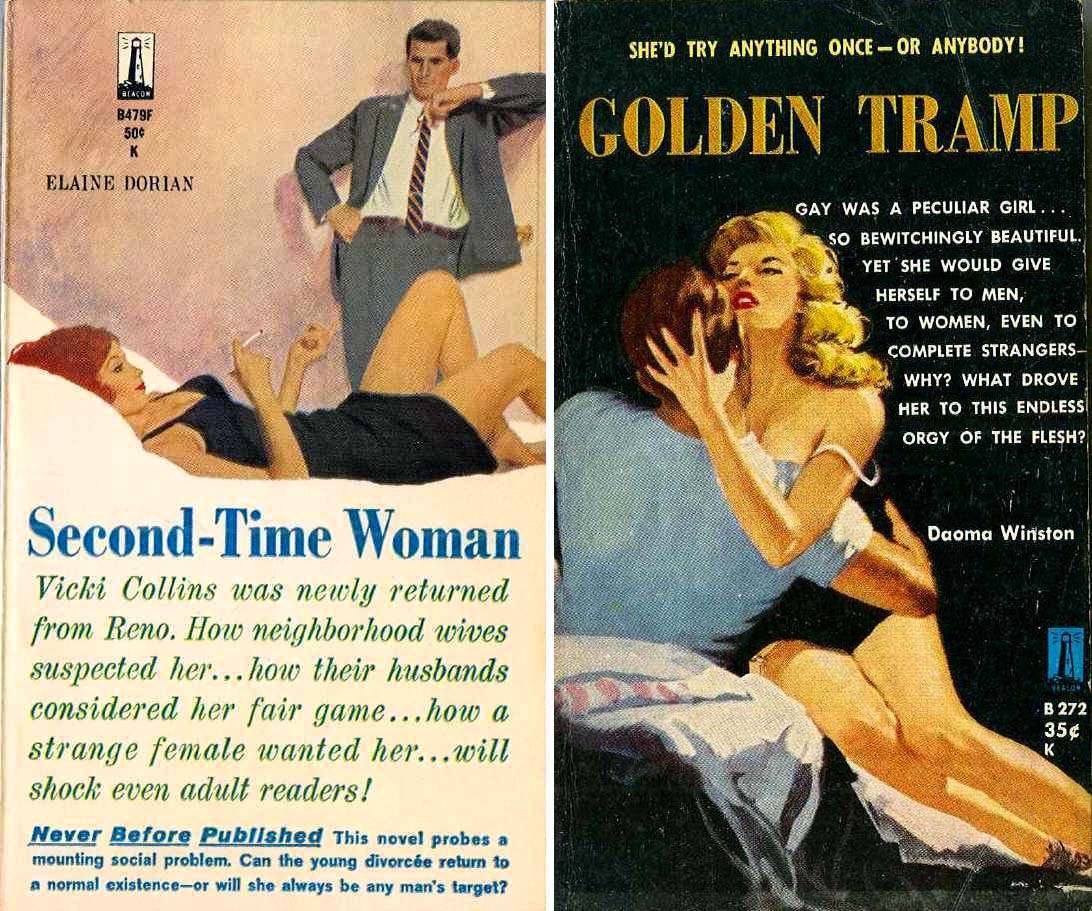 Second Time Woman: “This novel probes a mounting social problem.  Can the young divorcée return to a normal existence – or will she always be any man’s target?”

Golden Tramp: Seems like Gay just enjoyed having sex with men and women.  I’m not sure that qualifies as “peculiar” anymore. 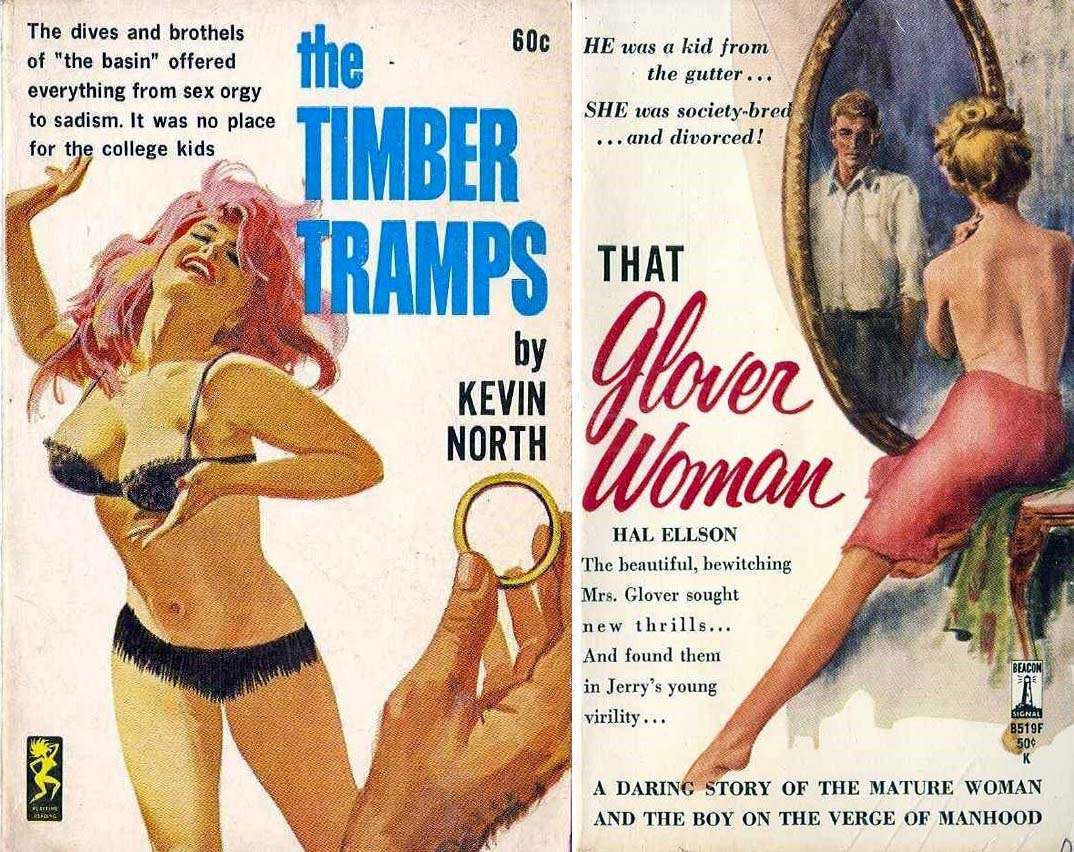 That Glover Woman:  The Simon & Garfunkel song just doesn’t have the same ring with Mrs. Glover. “Koo-koo-ka-choo, Mrs. Glover,
Jesus loves you more than you will know.” 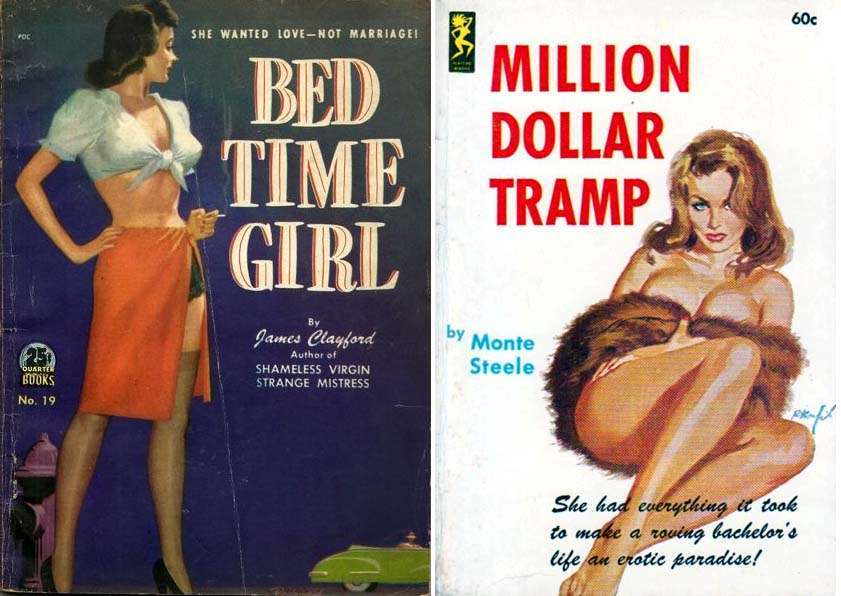 It seems the Bed Time Girl isn’t ready for marriage – quite scandalous for a time when girls were trained as soon as they came out of the womb to work tireless towards getting that ring. 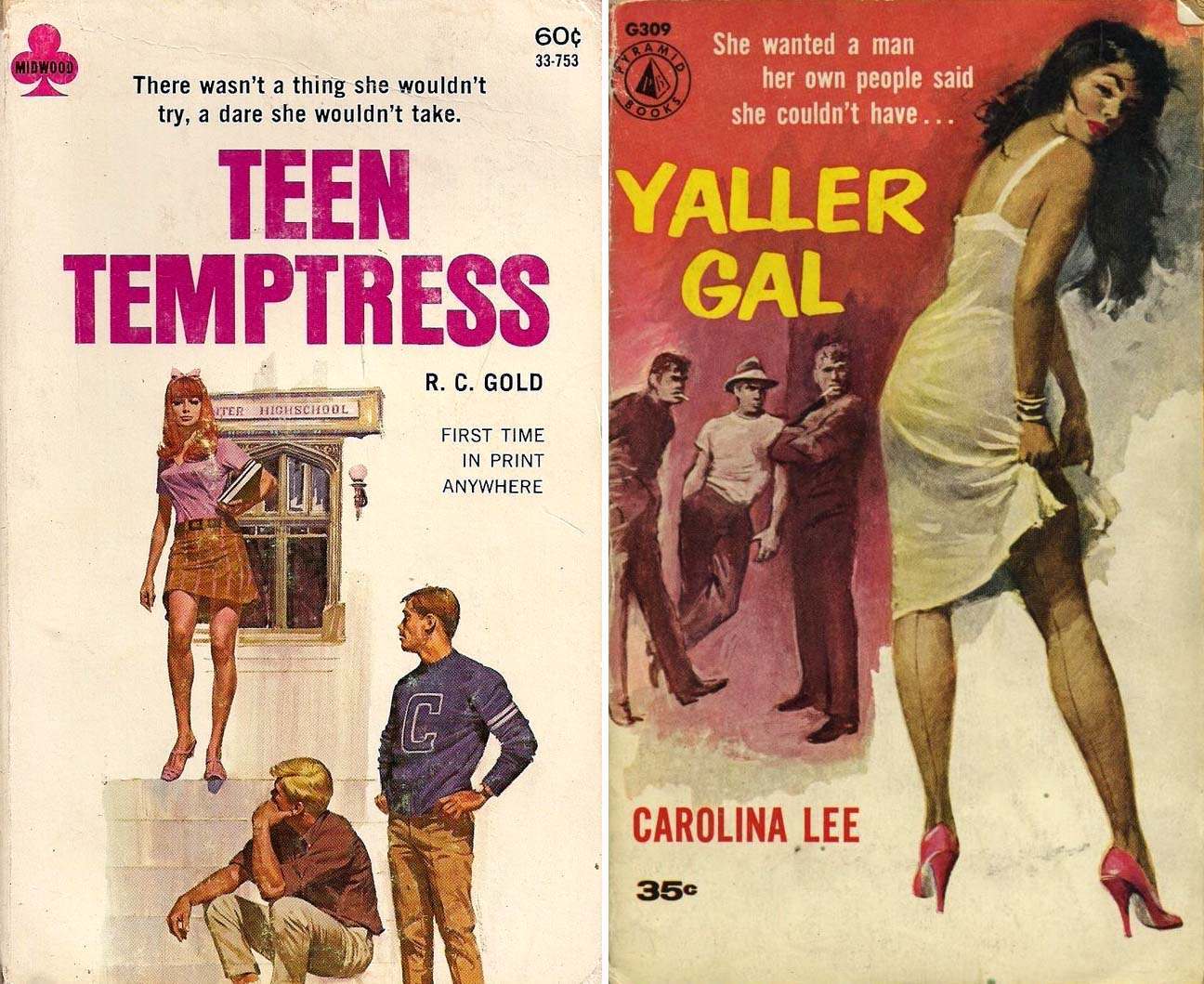 Teen Temptress:  Slut shaming was definitely big in the vintage paperback world.  I mean, why is she of ill repute while her ready-and-willing fellow male classmates not the object of equal scorn?  Go figure.

Yaller Gal: FYI “yaller” was a racial slur which referred to black people with lighter skin. 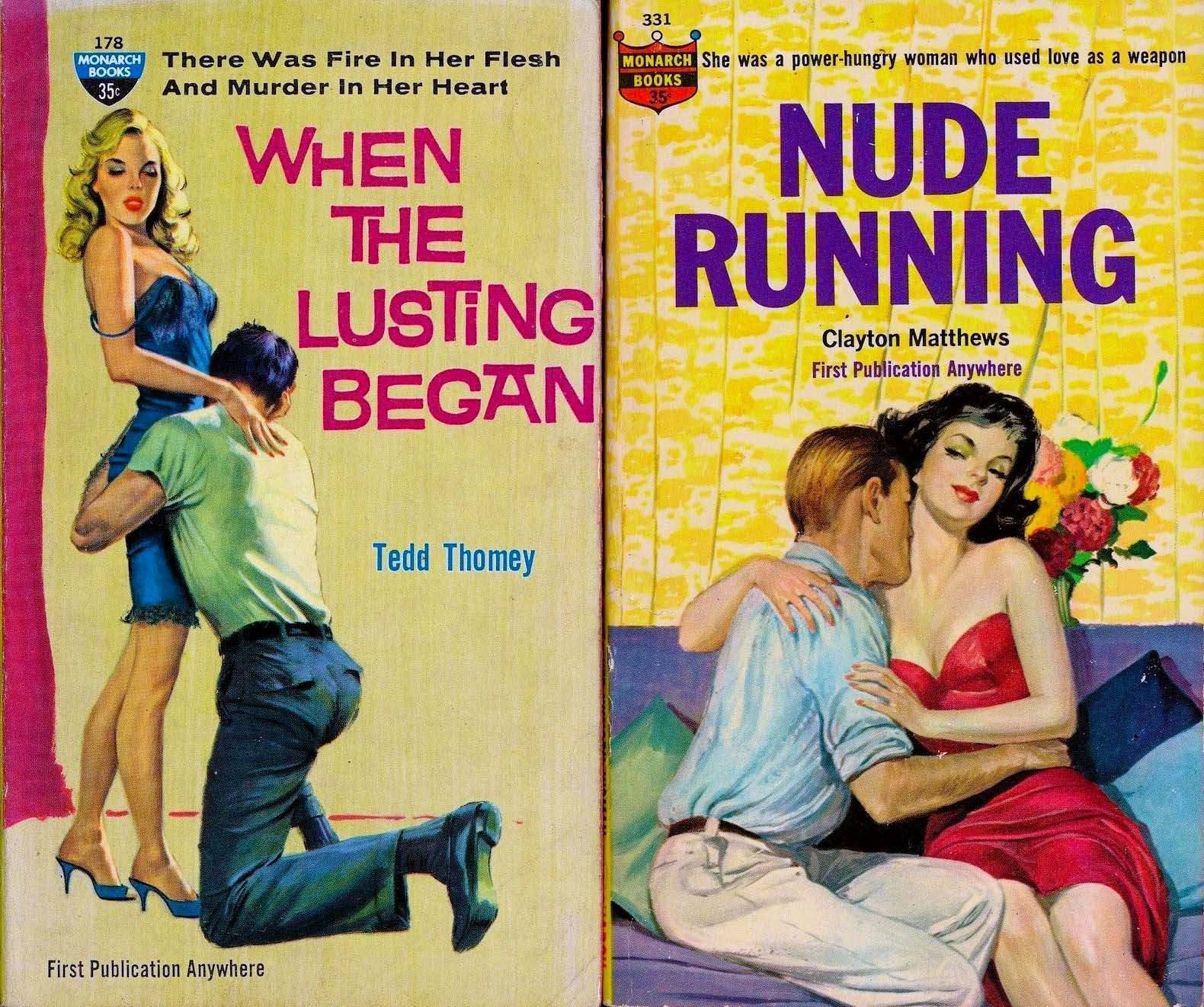 It’s interesting to note how many of these old paperbacks feature a woman absolutely dominating men via their sexuality.  “She was a power hungry woman who used love as a weapon” could have been the tagline for literally thousands of sleazy reads of the 1950s-60s.  What was going on the minds of midcentury males that this was such an overused trope?  Armchair sociologists – you have been summoned. 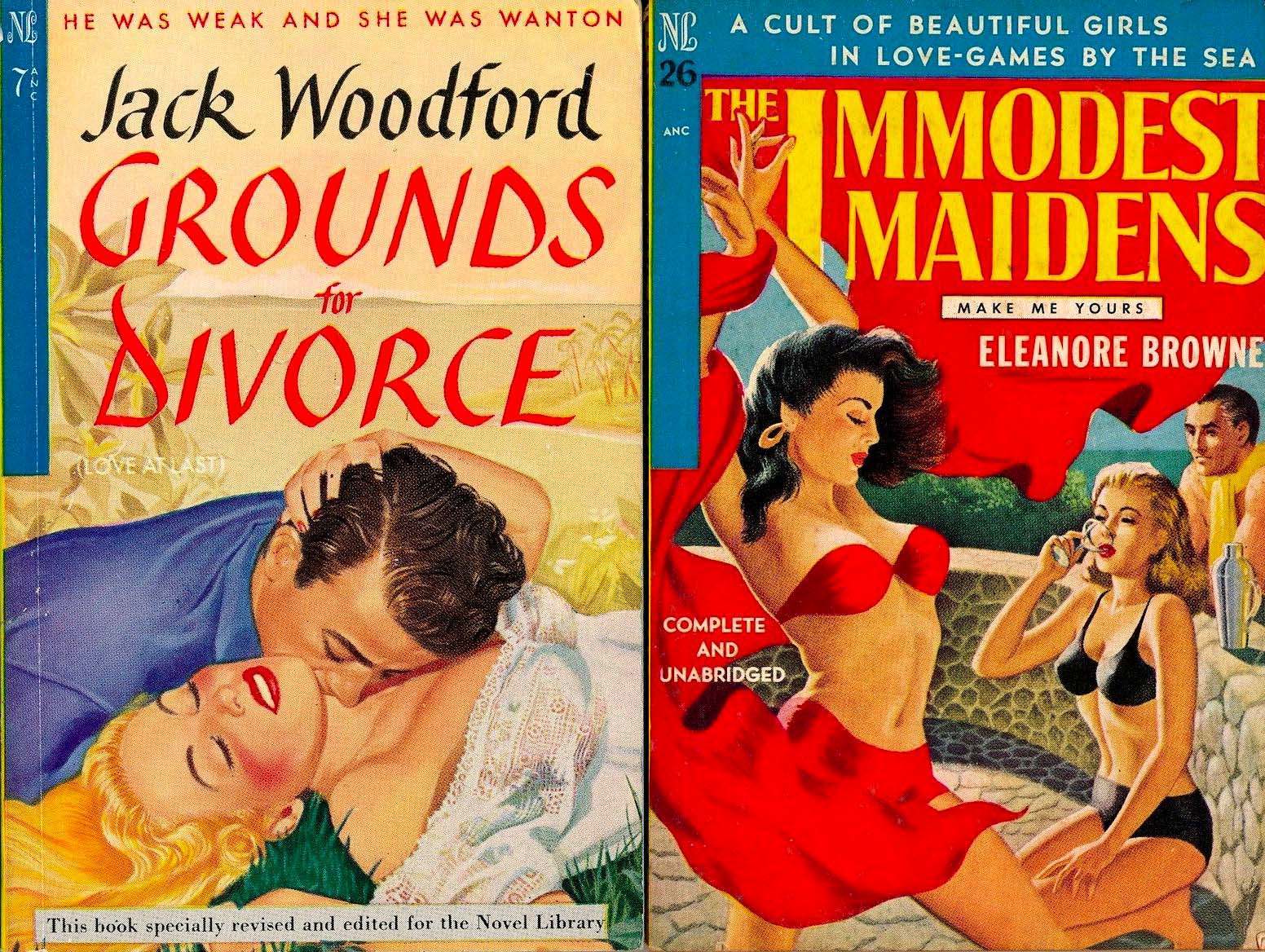 Grounds for Divorce: Another example of a weak male dominated by a wanton whore.  Again, we have the woman who’s the sinner – the guy is just her innocent victim.

Immodest Maidens: I love the “uptight suburbians meet uninhibited natives” trope.  This was extremely common in men’s action magazine stories as well.  The desire to break free of the puritanical shackles of the suburban life must have been strong – especially for the G.I.’s who got a taste of different cultures in their tours overseas. 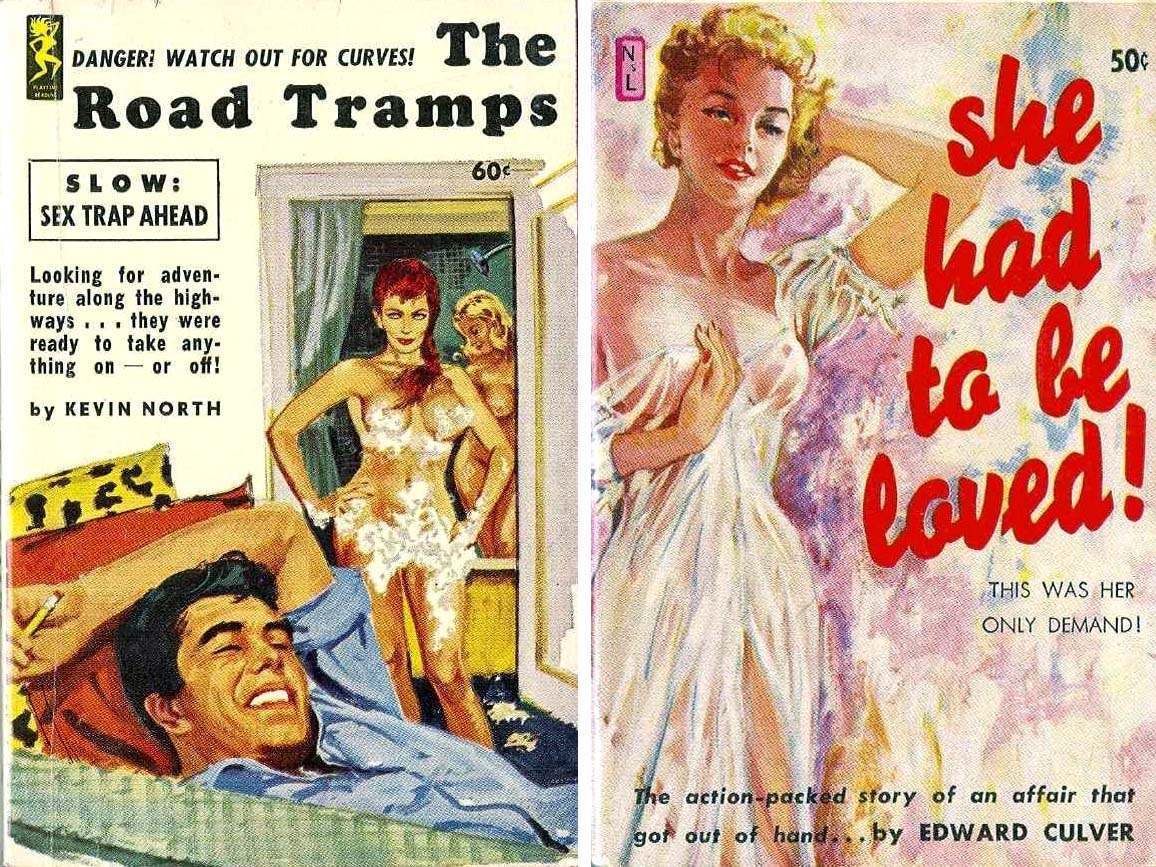 Say what you want about the Road Tramps, they practiced good personal hygiene. 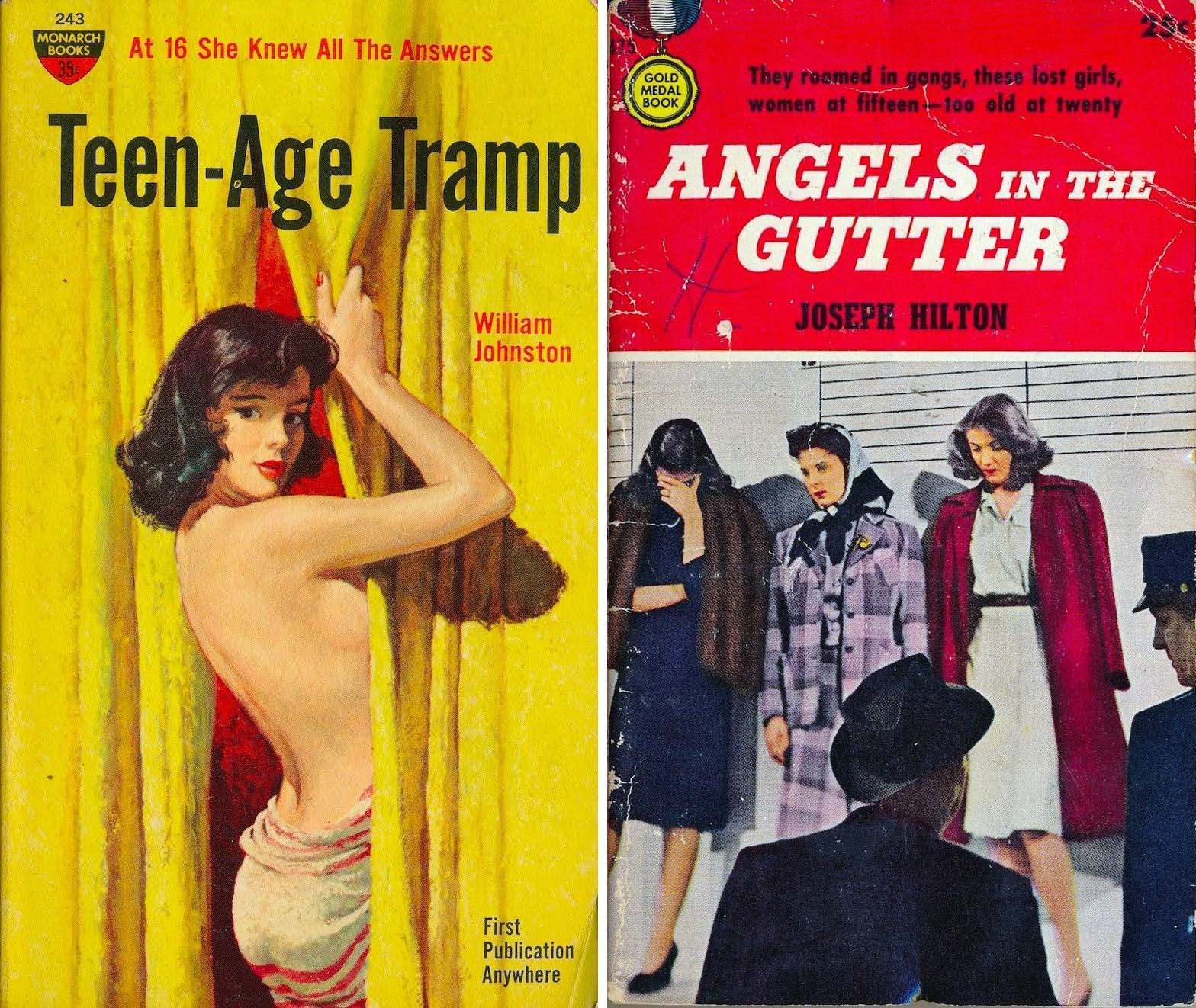 Among the trashy bad girl novels, the most common may be the teenage tramp variety.  Maybe it was tapping into mid century fears of their youth going wild (which would more-or-less become a reality as the Boomers came of age), or just your run-of-the-mill perverted fascination with young women.  I suspect it was a little bit of both. 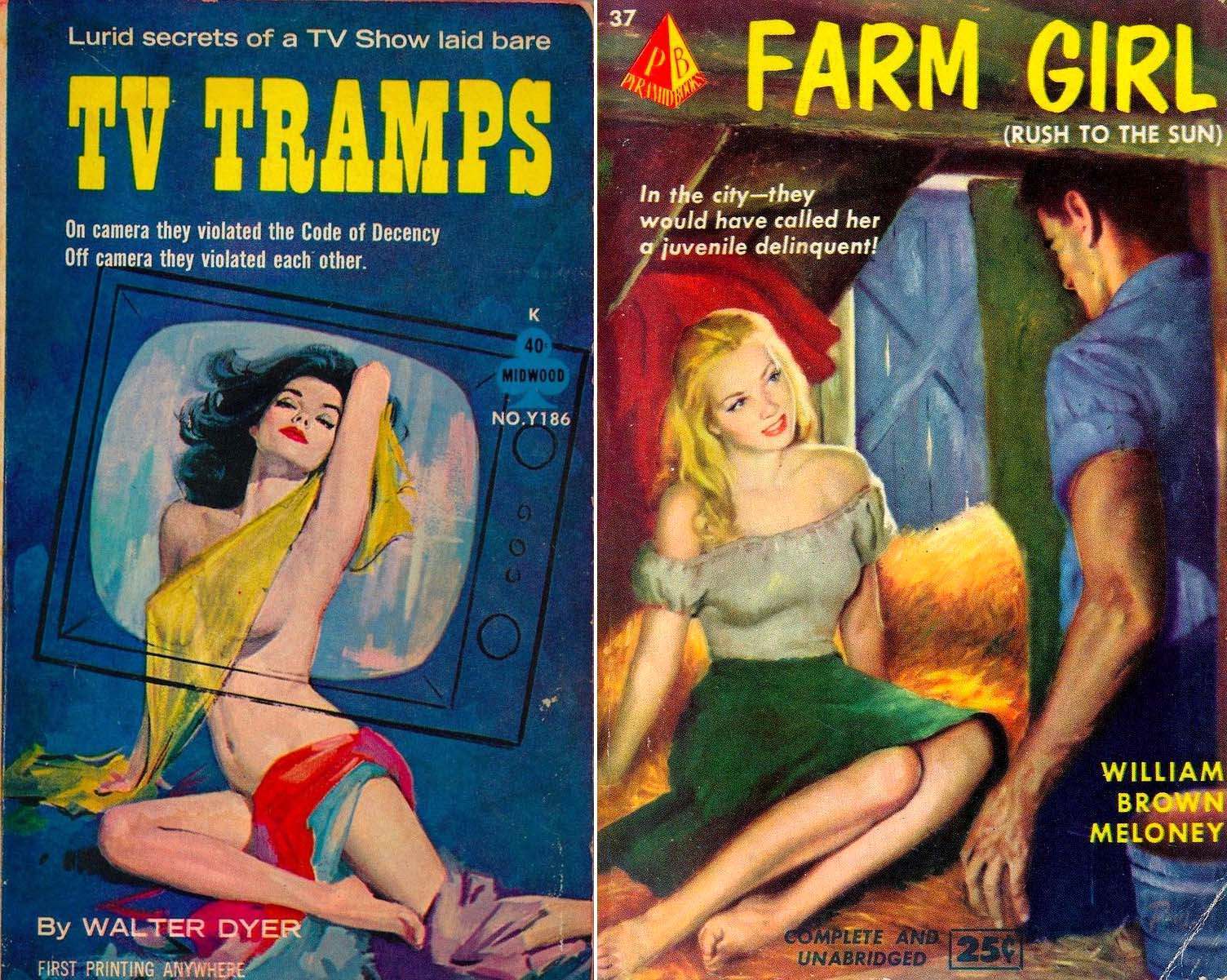 Farm Girl: “In the city they would have called her a juvenile delinquent.”  Not so in rural America – they are so much more liberal and sexually liberated. 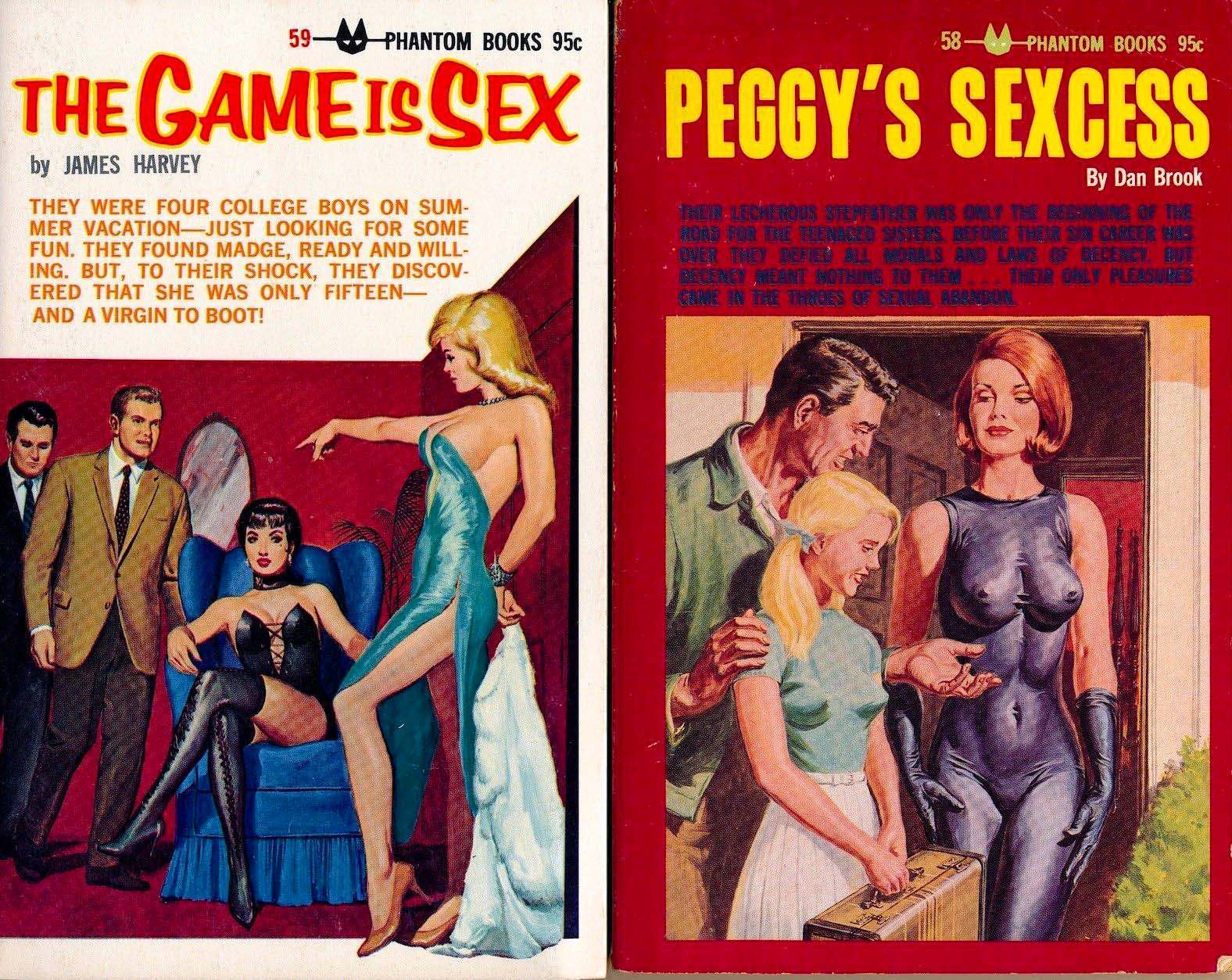 The Game is Sex:  Spoiler alert – Madge is 15 year old virgin.  Yet, I’m sure somehow the college “boys” are the tempted innocents and Madge should be ashamed of herself.

Peggy’s Sexcess:  “Peggy, meet your new stepmother.  You two are going to get along famously.” One of my all time favorite sleazy paperback covers.  It’s just so wrong (and awkward) on so many levels. 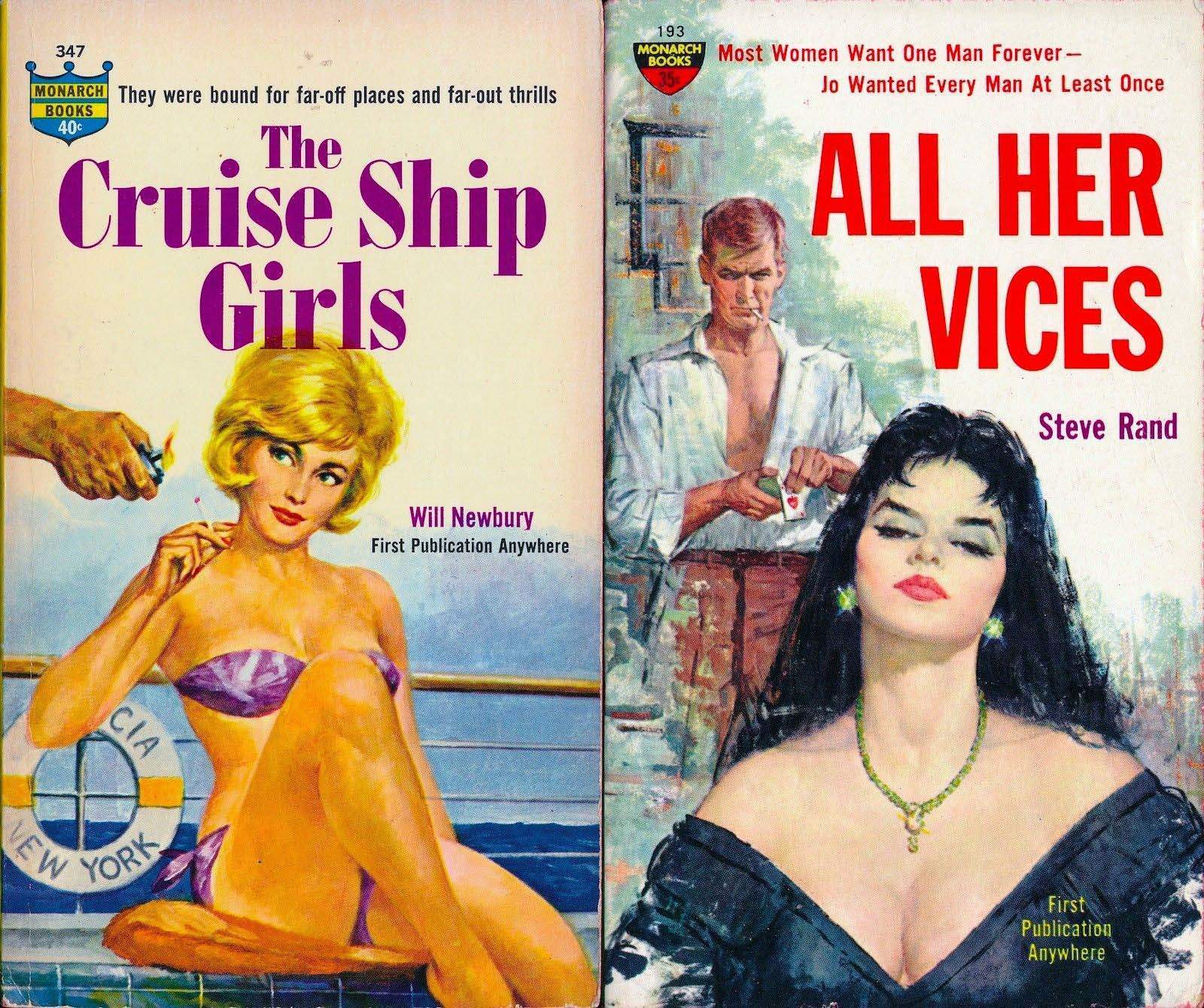 The Cruise Ship Girls: Beware the hand that holds that Zippo.  Another innocent male is about to be led down the path of sin.

All Her Vices:  She’s got vices aplenty; whereas, he just “followed through on an opportunity” – nothing wrong with that. 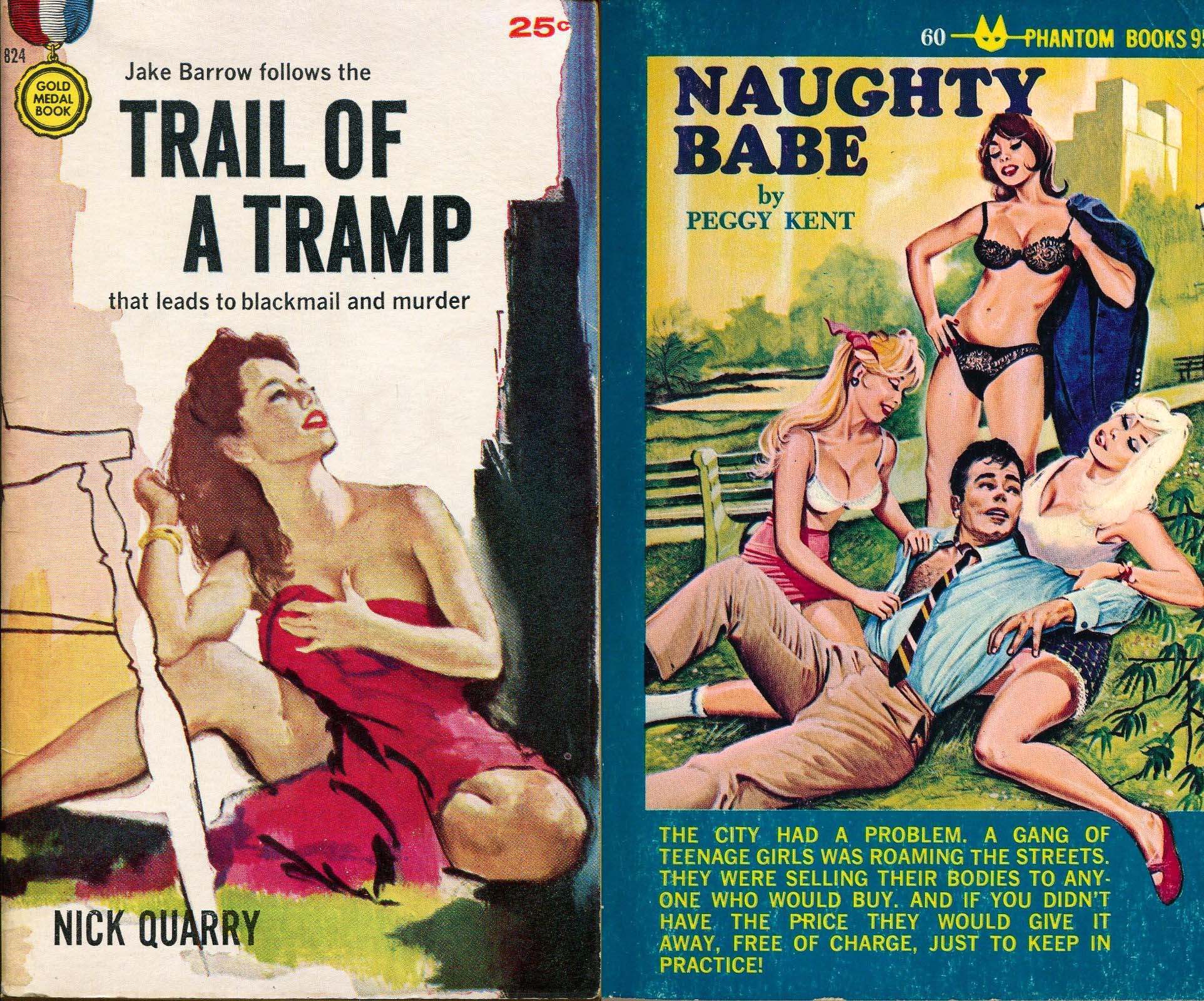 I think Naughty Babe wins the prize for best cover blurb.  So glad America is finally free of those roaming gangs of loose women…. they’d make you pay, but if you didn’t have the cash on hand, they’d do it free of charge to keep up their skills. 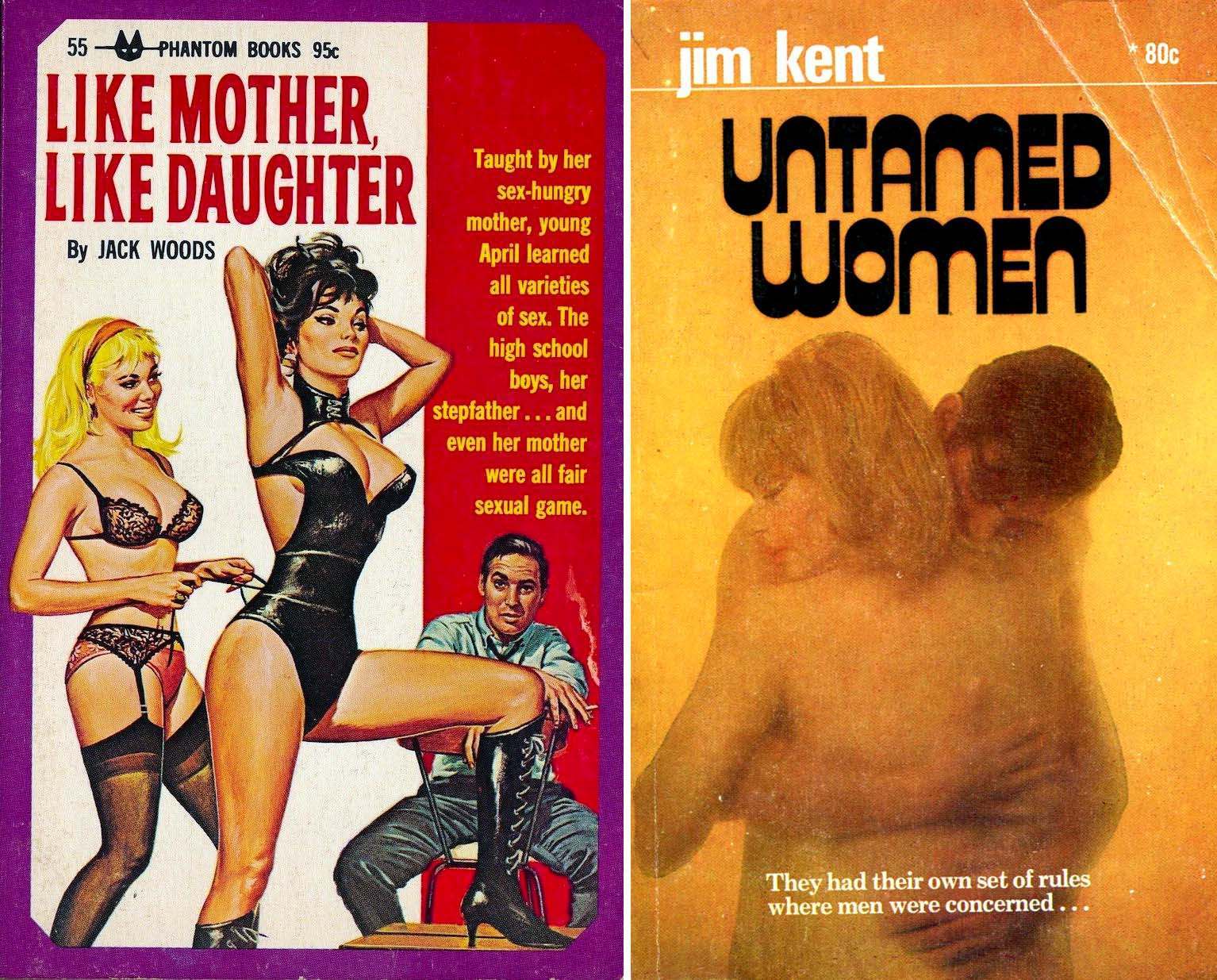 As sleazy and cartoonish as these old cover could be, the illustrations are fun to look at.  Sadly, as the 1970s reared its ugly head, sleazy paperbacks started to tend toward photographs instead of paintings.  I suppose it was cheaper, but it loses a lot of the lurid charm. 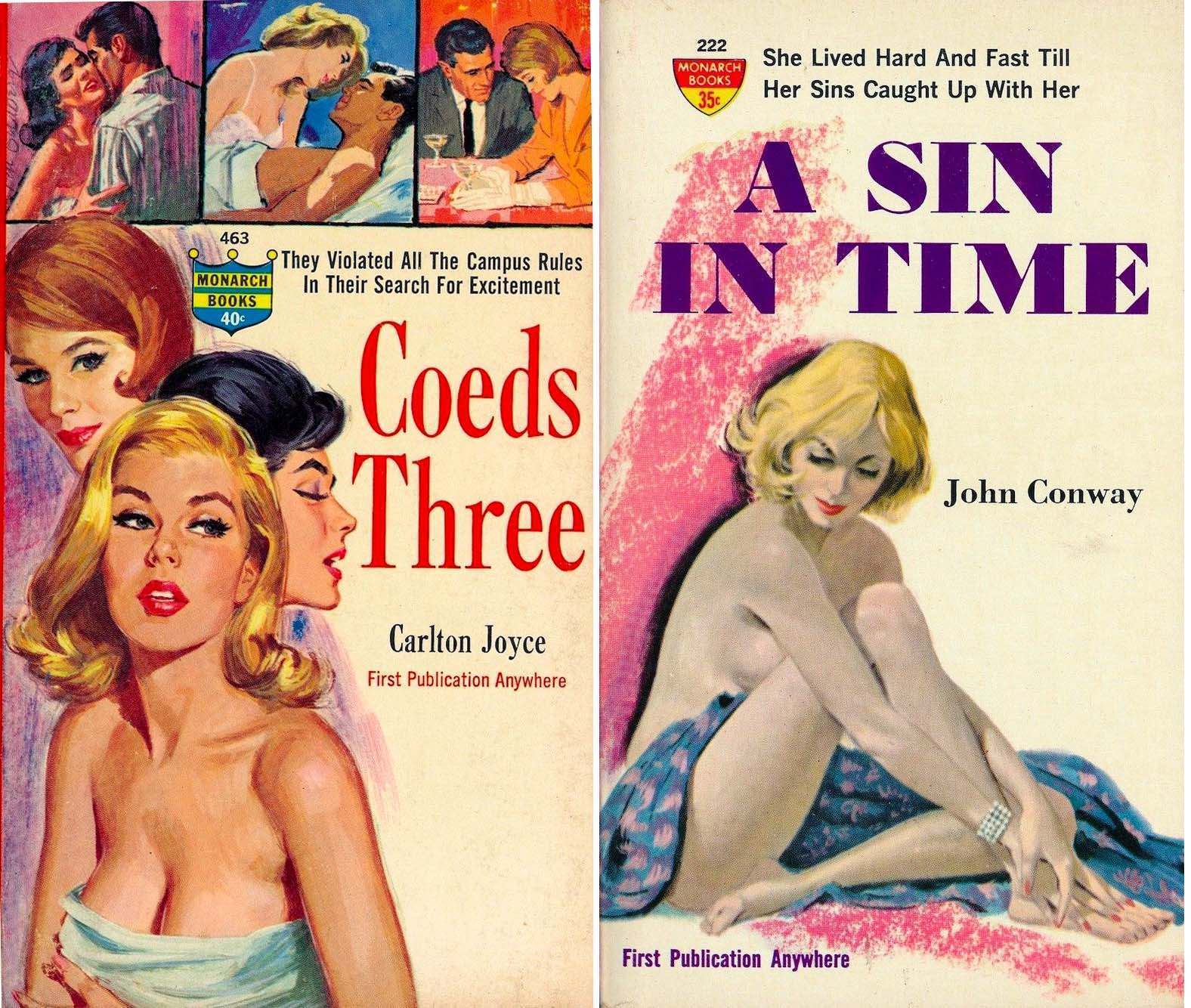 And finally, with A Sin In Time we see that all this immoral behavior will eventually catch up to a woman.  The men not so much.