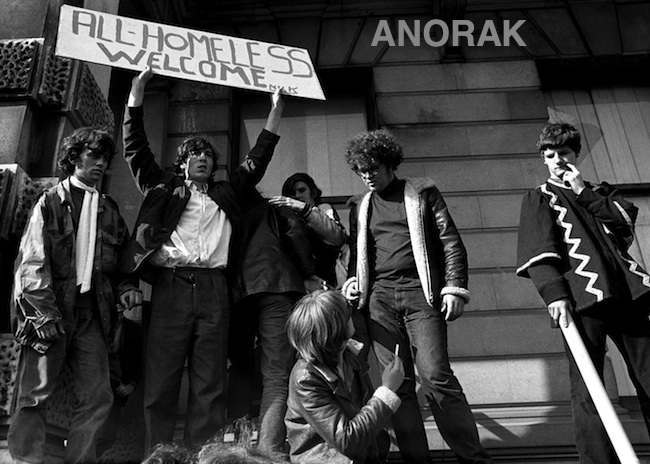 Around 200 police raided the 100-room 144 Piccadilly building after a stand off with the London Street Commune, a hippy group who wanted to make use of empty building as homes for the homeless. The group’s spokesperson / leader was “Dr John”, thought to be a Phil Cohen.

The mansion was once the home of Lord Palmerston, who had lived there about the time of the Crimean War. After the second World War, it became the home of the Countess of Carlisle, daughter to the 2nd Viscount Allendale, Lord in Waiting to the Duke of York, later George VI. It became vacated and fell into a state of disrepair. Then the squatters moved in.

The News of the World informed readers that the place was:

“Lit only by the dim light of their drugged cigarettes.”

The News of the World published a photo of the squatters on the “Dilly” steps below the headline:

“Everyone in this picture is a degenerate or a junkie.”

Skinheads were frequent visitors, arriving to pick fights they did not always win.

Drug taking, couples making love while others look on, a heavy mob armed with iron bars, filth and stench, foul language, that is the scene inside the hippies’ fortress in London’s Piccadilly

The police gained access by what the BBC termed a “makeshift drawbridge” through a ground-floor window to get in.

The drawbridge came down and Chief Inspector Michael Rowling flung himself bravely across the barricaded opening to establish a bridgehead. It was an old trick, no doubt played out a thousand times back in the (medieval) day, and sure enough a police-whistle shrilled and seemingly from everywhere a hundred policemen charged over the drawbridge, drawing their truncheons as they got in through the door. Unfortunately they trampled all over the Chief Inspector in the process.

Squatters pelted the police with plastic boules injected with water, roof slates, stones, pieces of wood and iron bars thrown from the roof. A petrol bomb was found in the place.

The first civilian into the building was Graham Harris, the under-sheriff of London.

“The place was in a mess. There was rubbish everywhere. People had written on the walls and things like that.”

Daily Mirror declared  it as “The Fall of the Hippy Castle”.

The police action, which was decided on to prevent the occupants taking precautions today when a High Court possession order was to become effective, so impressed Mr Ronald Lyon, chairman of the Lyon group of companies, that he walked into West End Central police station and wrote a cheque for £1,000 for the Police Benevolent Fund.
Mr Lyon said last night: “I feel that these hippies had no legal or moral right to be in that building. One is very ready to criticise the police when parking and speeding, but when there is a real problem you run to the British bobby and he is pretty good at his job.”

Enoch Powell MP referenced the event in speech of 1969:

Look at the particular case. ‘Bad housing’ is said to be the grievance which provokes scores of ruffians into seizing a building and doing battle with the police in Piccadilly. The claim is simply untrue, whatever ‘bad housing’ may mean. But ‘bad housing’ can mean a variety of very different things, which it is dangerous to confuse. There is a tiny minority of people who by reason of some kind of fecklessness or incompetence are chronically unable to feed, clothe and house themselves and their families.

Many of those who hadn’t quit the scene or been jailed moved to a new squat in Covent Garden.