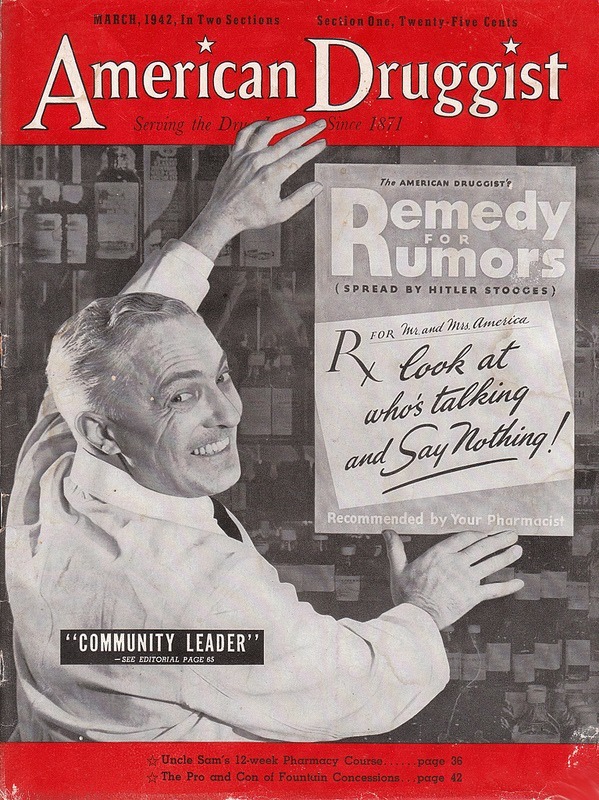 So, I came across this trade magazine, American Druggist, from 1942 and found the adverts inside so interesting, I had to share.  First off, it’s got this intriguing sign on the cover:

“Remedy for Rumors (Spread by Hitler Stooges) For Mr. and Mrs. America, look at who’s talking and Say Nothing!”

This sign actually came with the magazine, as a sort of centerfold. What the – ? 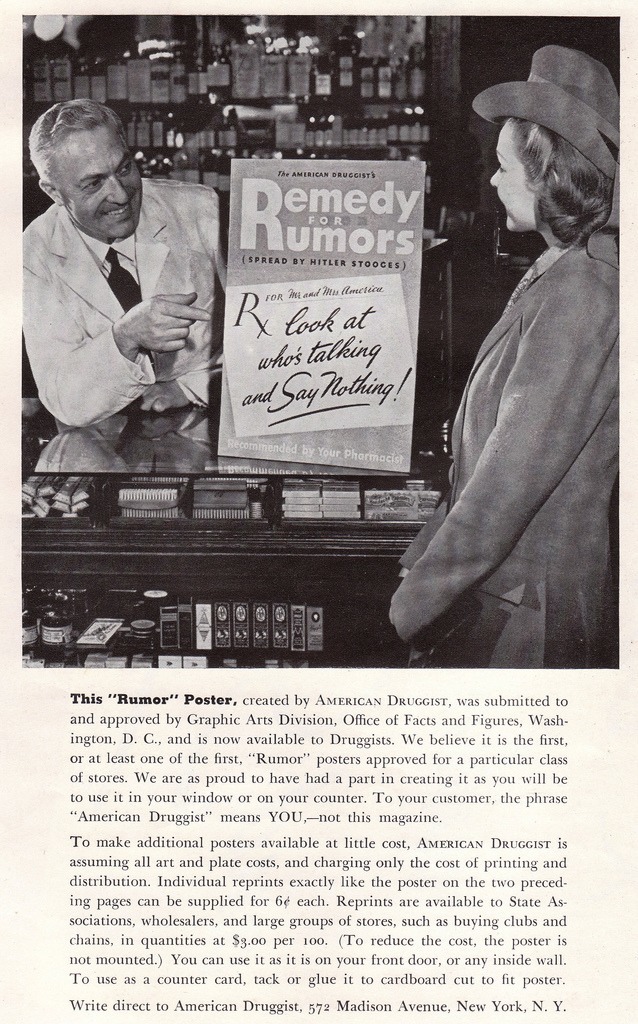 The interior of the magazine actually doesn’t provide much enlightenment. I can only assume it’s a word of caution to Americans to beware of German propagandists or spies among us. Or perhaps it’s just a healthy recommendation to not listen to the gossip mill or contribute to it; but rather stay informed through reliable sources. Any WWII experts out there that can shed light on this? 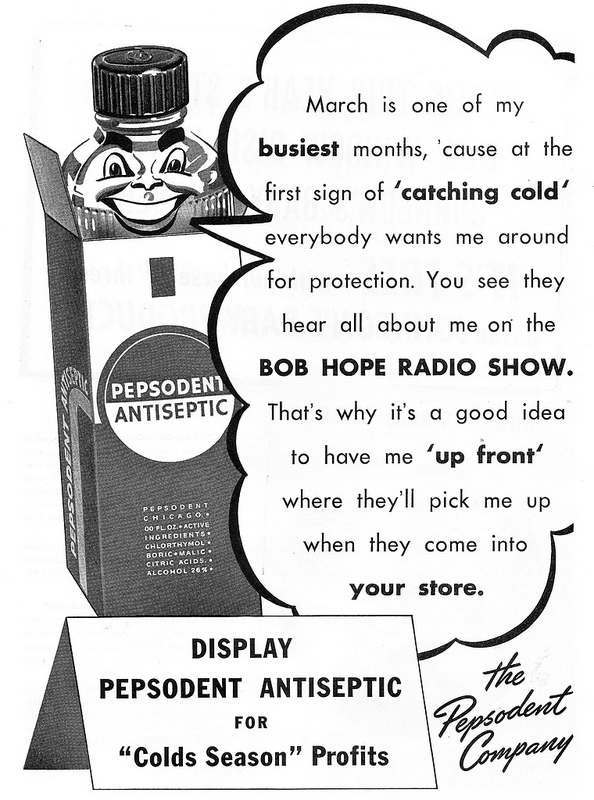 So many of the advertisements were geared toward the pharmacist, not the consumers in an effort to get their products on the shelves. It made me kind of sad, actually. In 2013, we have Rite Aid, CVS, and Walgreens pharmacies, and others associated with big supermarkets or Wal-Mart. It’s laughable to think the “druggist” would have a say-so as to what gets stocked on the shelves anymore.

Okay, here’s yet another item that had me a little perplexed at first. Why is she yelling “NO SOAP”? Barbasol doesn’t require a brush, lather or rub-in…. but why is this chick freaking out? Is it because he has told her that he’s using Barbasol which doesn’t require soap, and she is interpreting this as uncleanliness?

A little research and I discovered “No soap” was 1940s slang meaning something like “no way” “no luck” or “this isn’t going to work”. The lady has just rejected the poor guy’s advances and is leaving. Of course, this wouldn’t have happened if only the guy had shaved with Barbasol (an advanced formula that contains no soap and requires no brush). This is an early version of the most important law of advertising – sex sells. 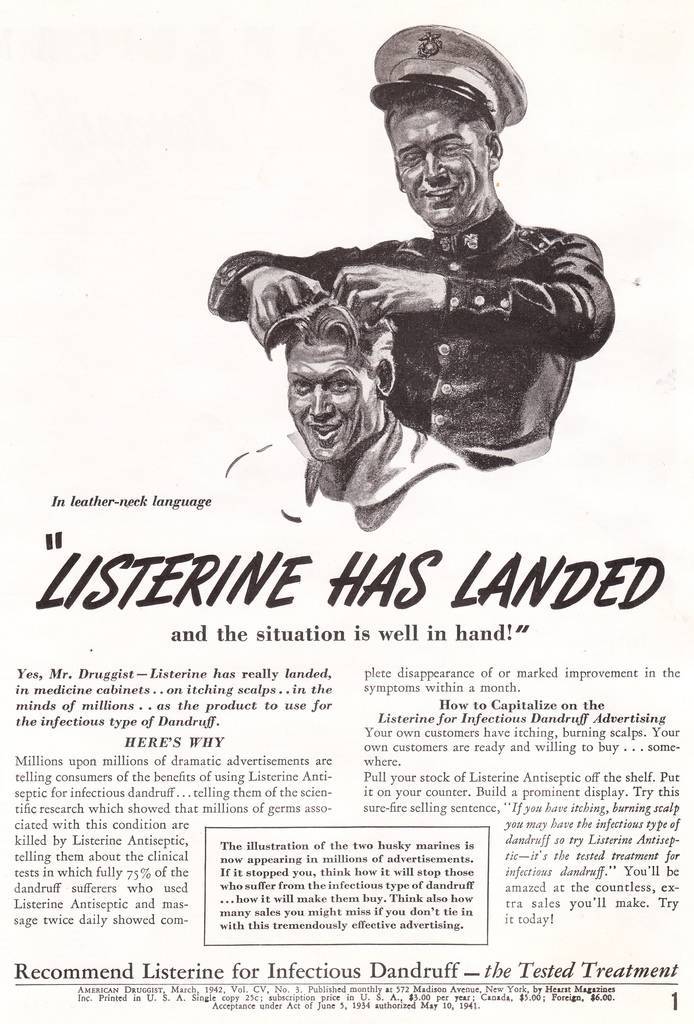 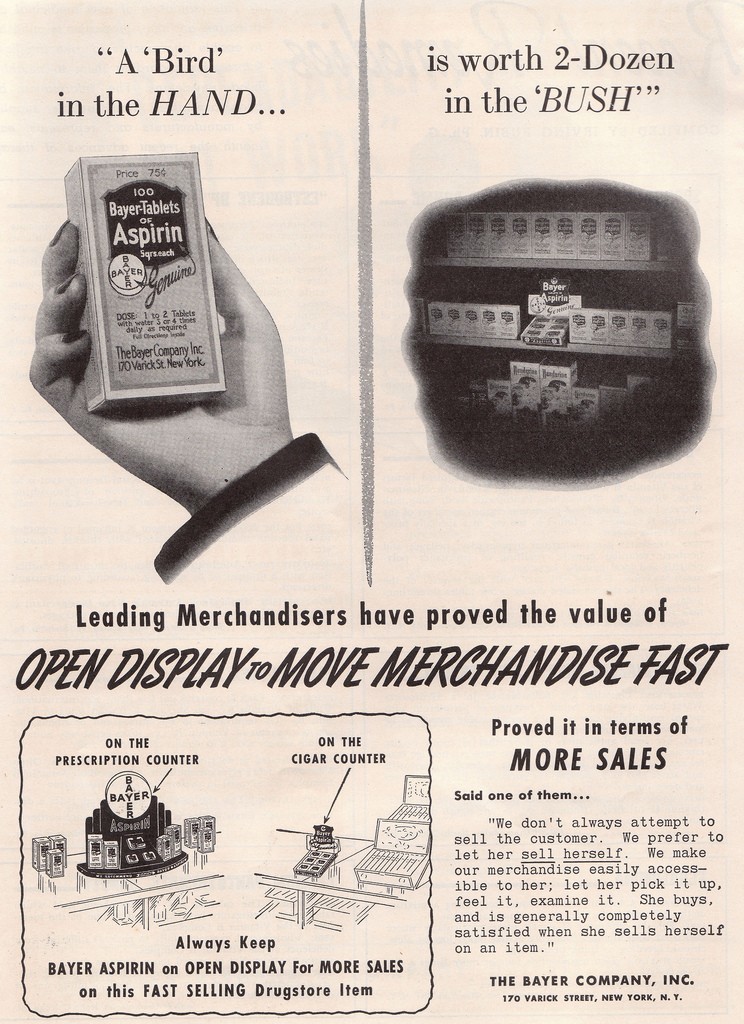 Just as in the last ad, this one is pushing the druggist to take the product off the shelf and place it prominently on the counter. This is particularly interesting in that it assumes the buyer will be a woman. Read the text at the bottom right:

“We don’t always attempt to sell the customer.  We prefer to let her sell herself.  We our merchandise easily accessible to her; let her pick it up, feel it, examine it.  She buys, and is generally completely satisfied when she sells herself on an item.” 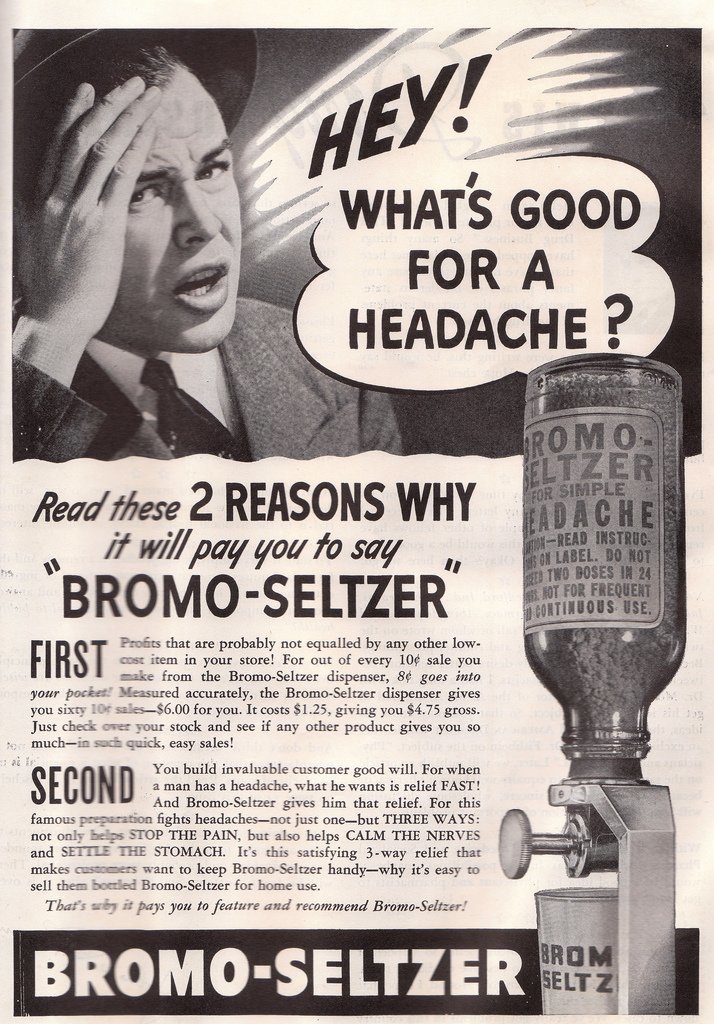 Bromides have a sedative effect, and were the go-to drug for hangovers. They were declared illegal in 1975. 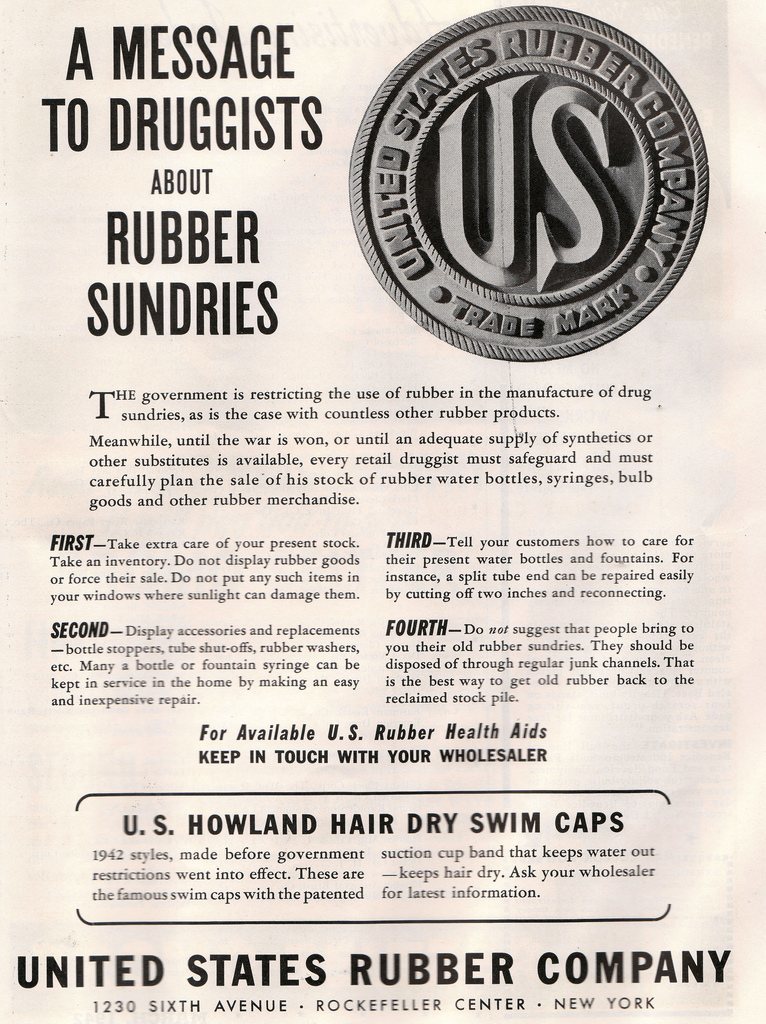 When was the last time you used the word “sundries” in a sentence? Interesting to note the direct impact the war effort had on civilians. Today, we are blind to the sacrifice because all wartime expenditures just get added to the national debt.

A simple pen never sounded so good. “Trans-Vue” ink, Morocco finish, and a 14 carat gold point for a buck-fifty? Hells Bells, I want a Wearever De Luxe asap! Be sure to order it in the men’s size. 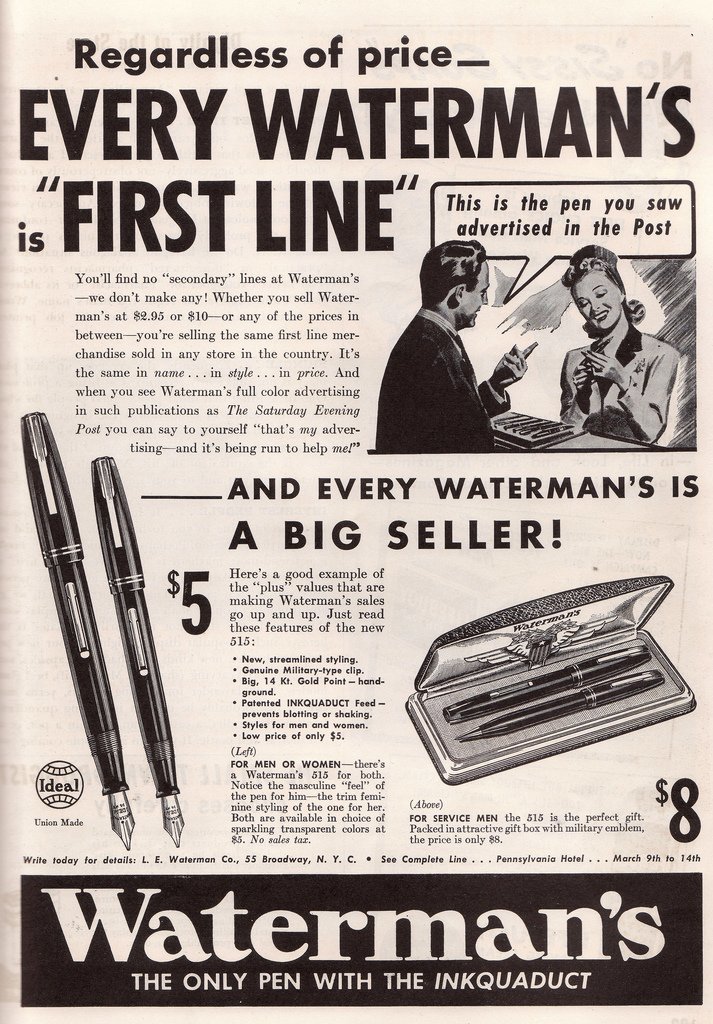 Wait a minute. Cancel that Wearever De Luxe. The Waterman’s pen has INKQUADUCT. Plus, the male pens have a “masculine feel” (whereas the women’s pens have “trim feminine styling”). And chicks dig a pen that’s advertised in The Post. 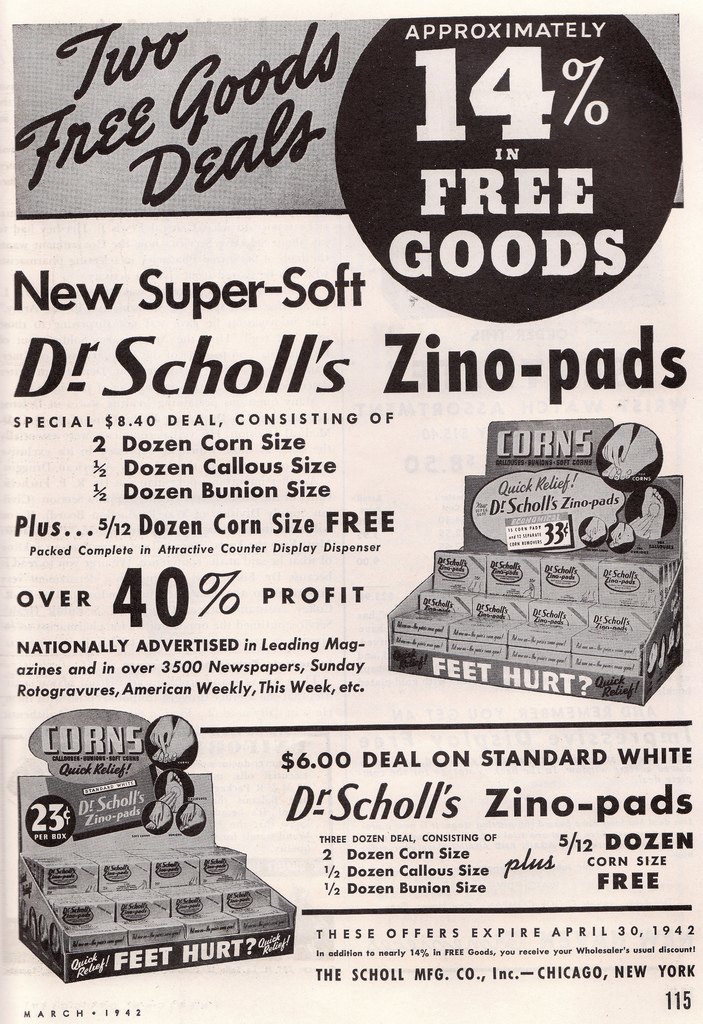 I’d never heard of a Zino-pad, but was surprised to learn their still around. I don’t know what the hell “Zino” means, and no amount of Google searching found me an answer. The active ingredient is salicylic acid, which sounds nothing like “zino”. 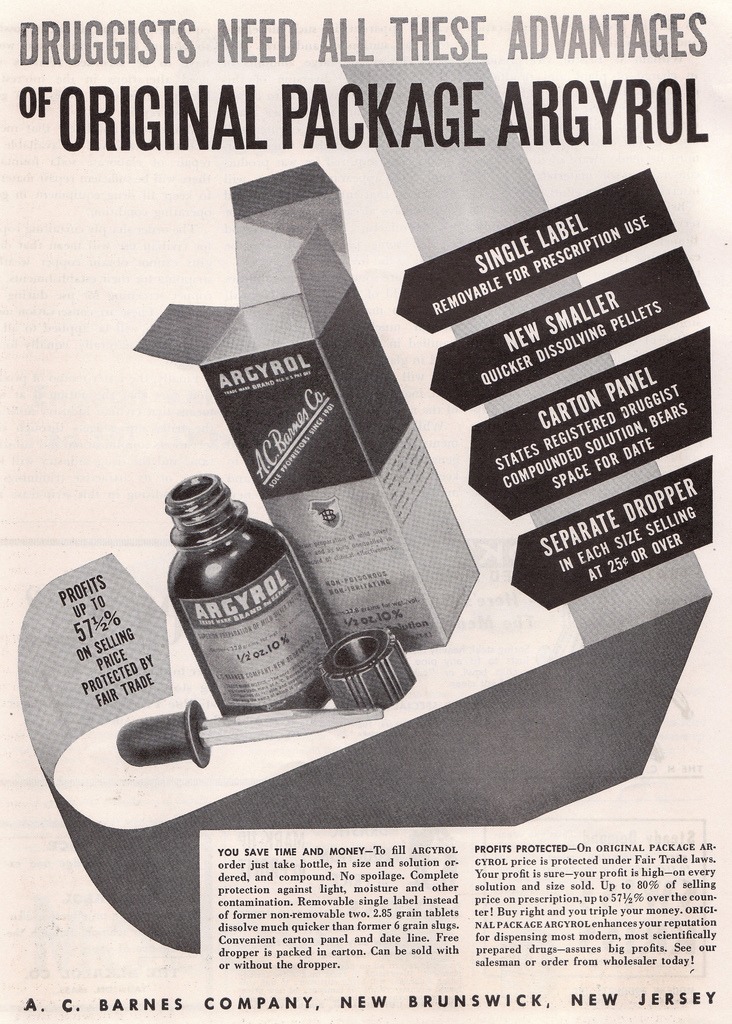 Argyrol is a silver protein used to combat infections; it was particularly popular in its effectiveness against gonorrhea. 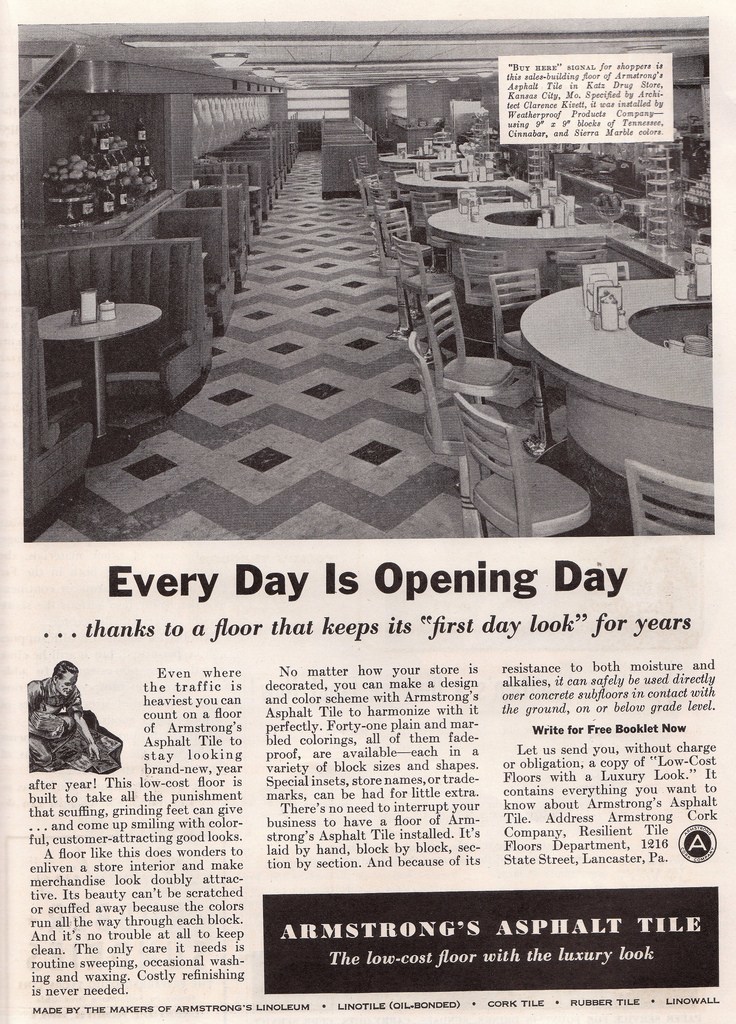 Every town had its family owned drugstore and diner, each with their own unique qualities. Today, an El Paso Applebee’s is the same as a Baltimore Applebee’s. A Portland Walgreens is the same as an Akron Walgreens. We’ve voluntarily traded in character for homogeneity.

Ivory and Dial are wimps. And don’t get me started on Irish Spring. 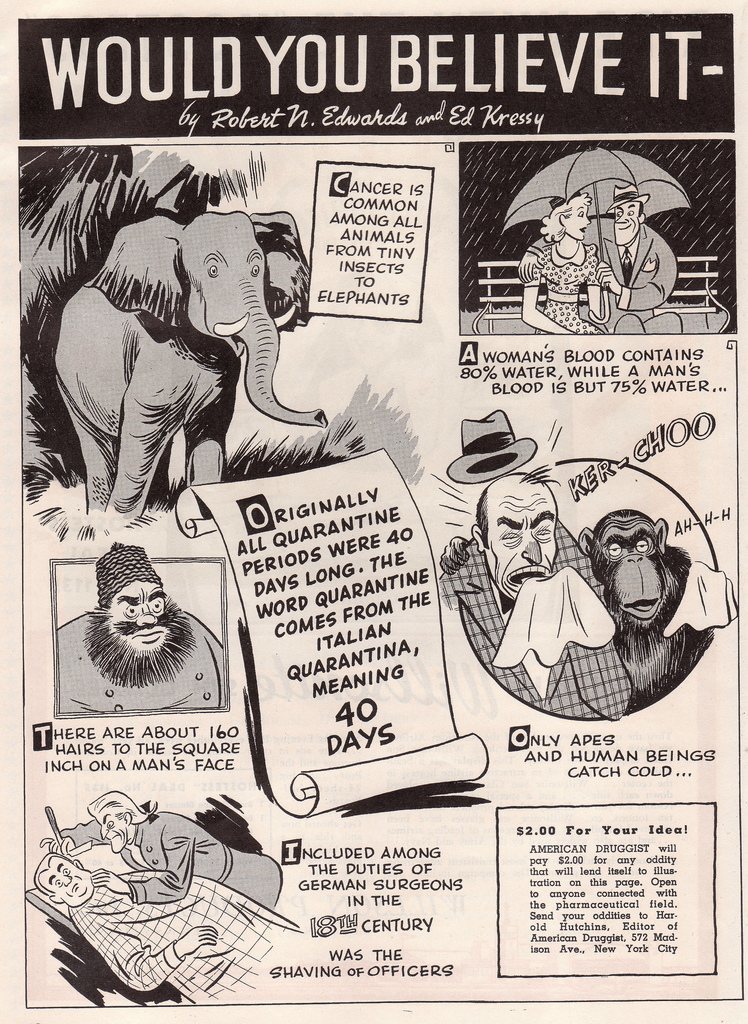 A woman’s blood contains five percent more water? I’d like to call BS on that one. 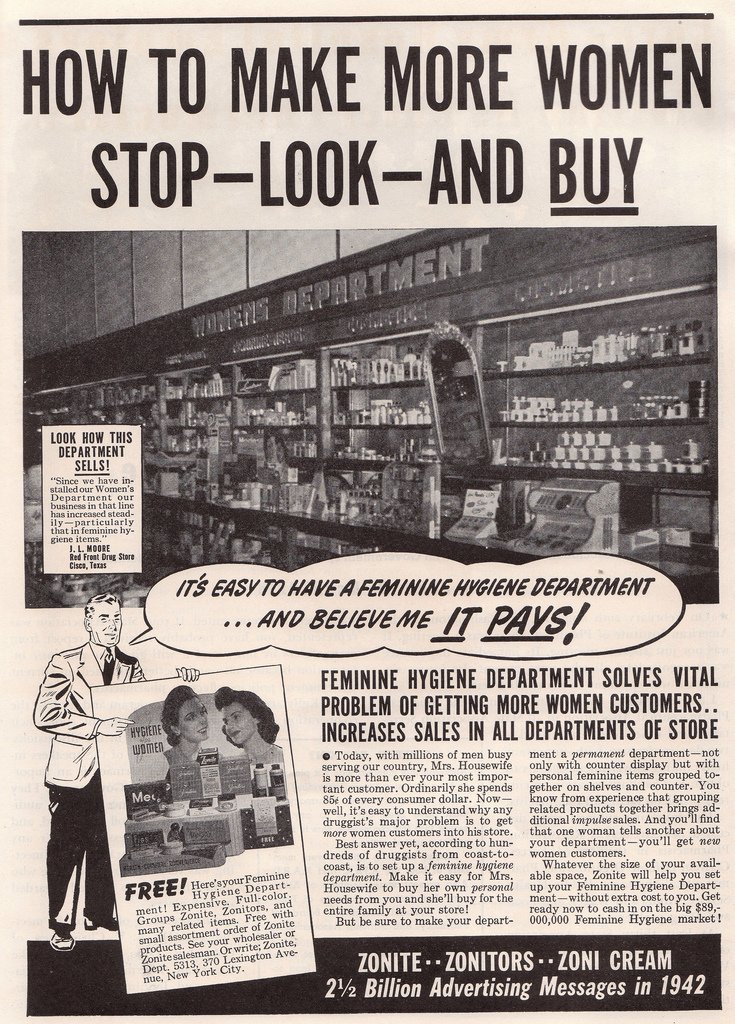 I find this fascinating. With the fellas in foxholes, the drugstore became geared almost exclusively toward women. Set up a feminine hygiene department and watch the money roll in. 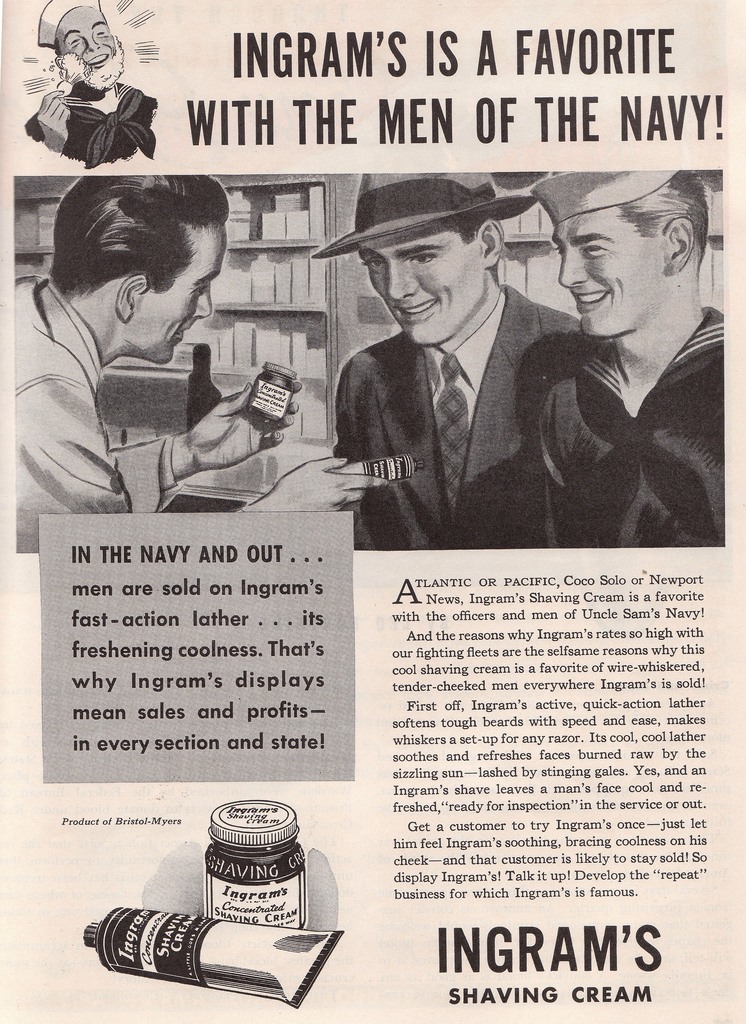 Is your face “lashed by stinging gales” or “burned raw by the sizzling sun”? Ingram’s shaving cream is the brand for you. 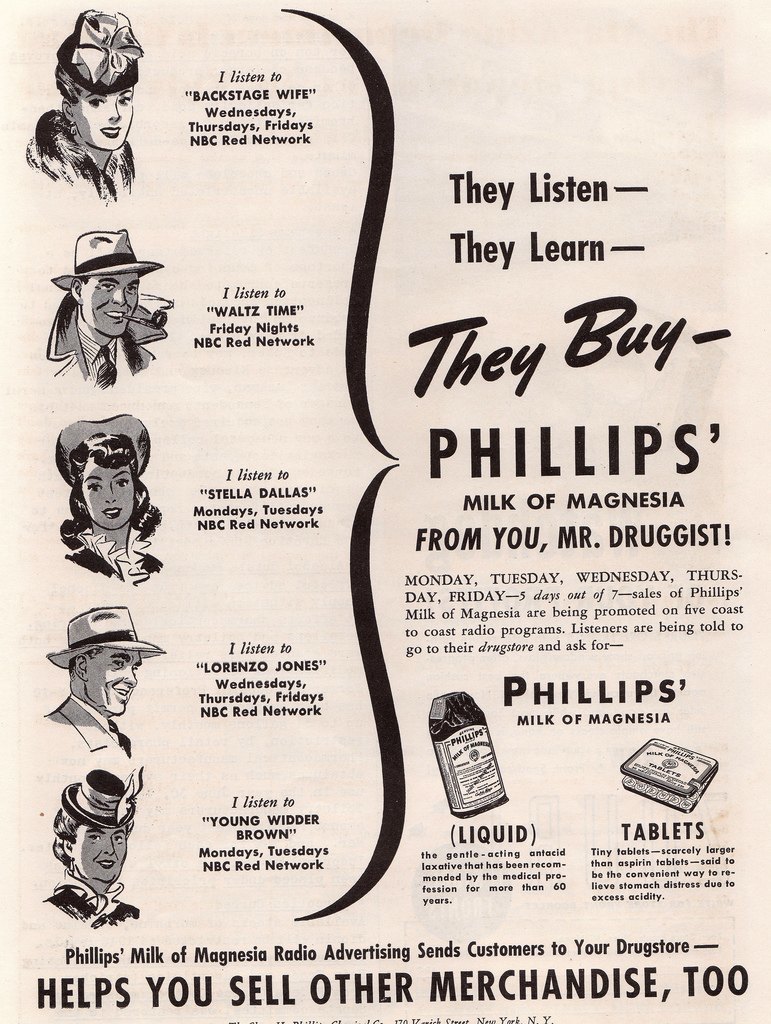 Can you imagine this ad today? “I watch ‘Here Comes Honey Boo Boo'” or “I watch ‘Keeping Up With the Kardashians'”. 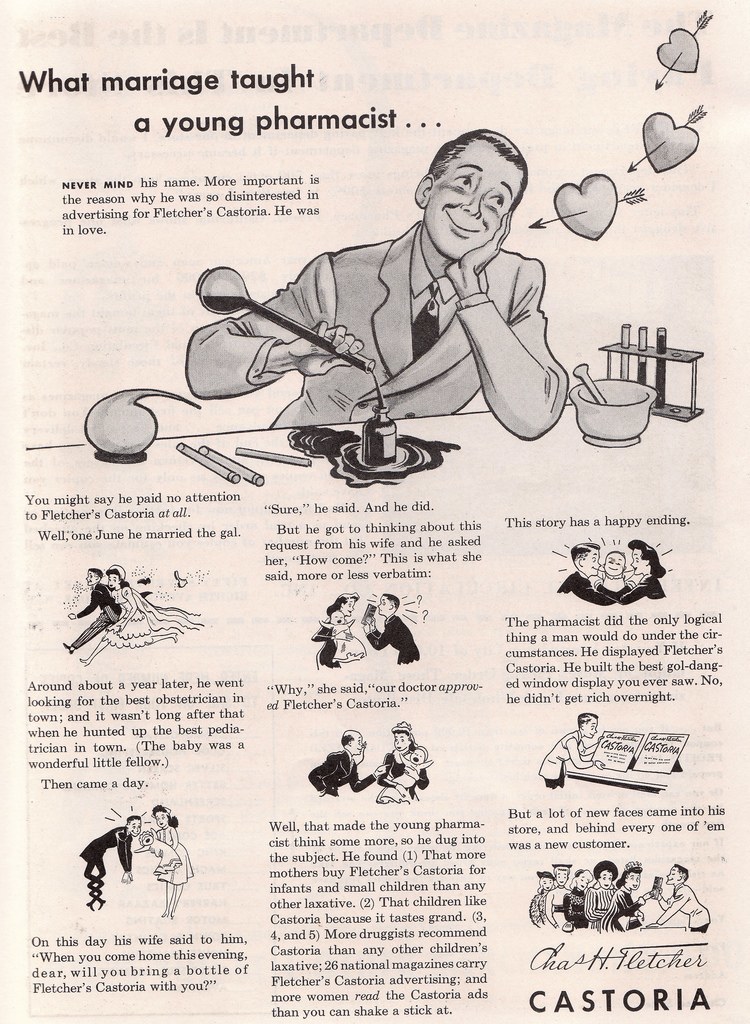 Favorite lines: “children like Castoria because it tastes grand” (yeah, right) and “He built the best gol-danged window display you ever saw.” 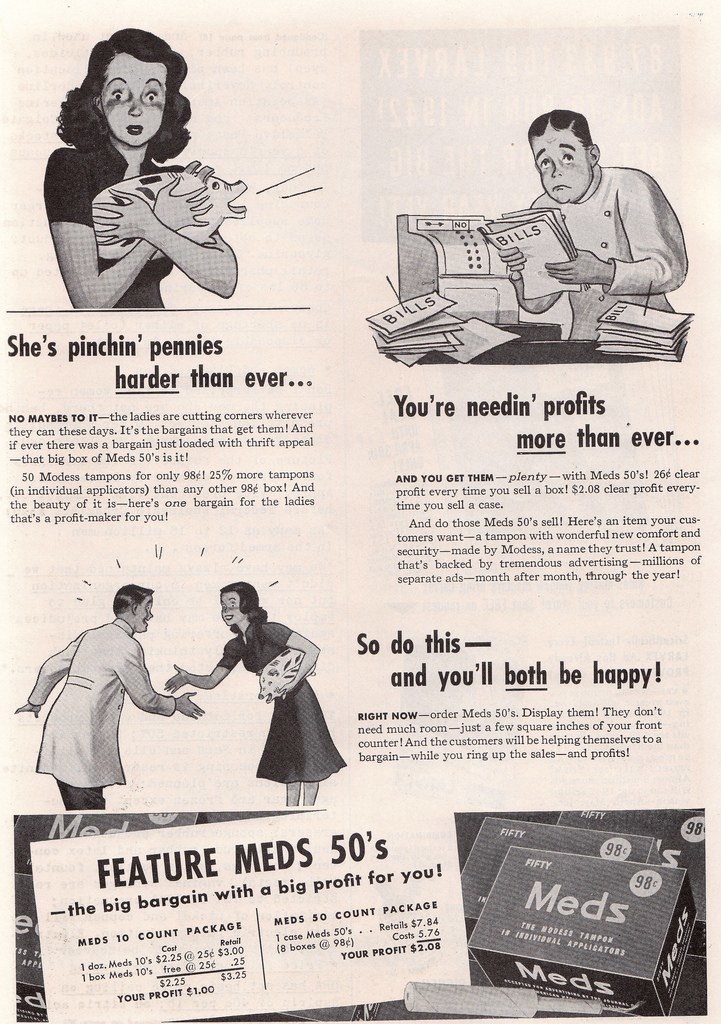 Well, that’s all the adverts we’ll take a look at today.  It is worth noting that, about a decade after the war ended, these same drug stores, such as Katz in Kansas City, MO would become a battle ground themselves, of sorts, in the civil rights movement.