“I have this idea that photo genres spread like fads,” says John Van Noate. “You went to visit your Cousin Minnie in Buffalo and she had one of these newfangled diamond photos, and so when you went back home you told the local photographer (there seems to have been a photographer on every corner) about what you’d seen, and he (usually, but not always, the photographer was a man) tried it, and then your friends saw it, and they wanted one too.

“I’d really love to be able to experience the wonder and awe of living in the dawn of the age of photography. The relative value of any one image, then, was astronomical in comparison to the value of an image now. If anyone knows of a book or books that discuss the experience of taking, owning, seeing, or being the subject of vernacular photographs, in those early days, please hook me up.” 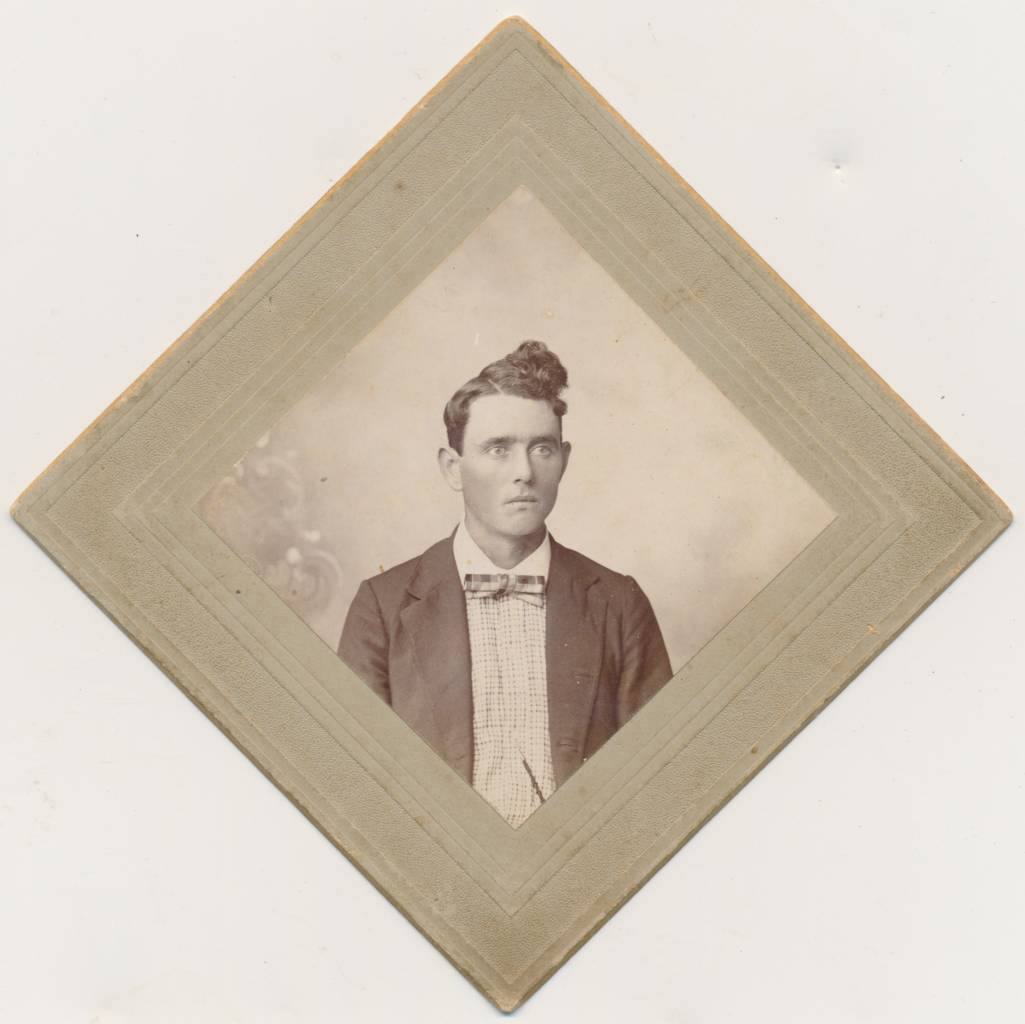 I didn’t really set out to collect diamond photos. I just started buying old photos. I bought a lot of them. Thousands. And then I started putting some of my photos on Flickr. And some of those photos were diamonds. These are nice, I thought. People seemed to like them. So I looked through all my thousands and thousands of photos and picked out all the diamond photos. I think I found 57, which seemed like a lot at the time. So then I started collecting them in earnest. Now I have maybe 300. [Surf’s Up Guy] 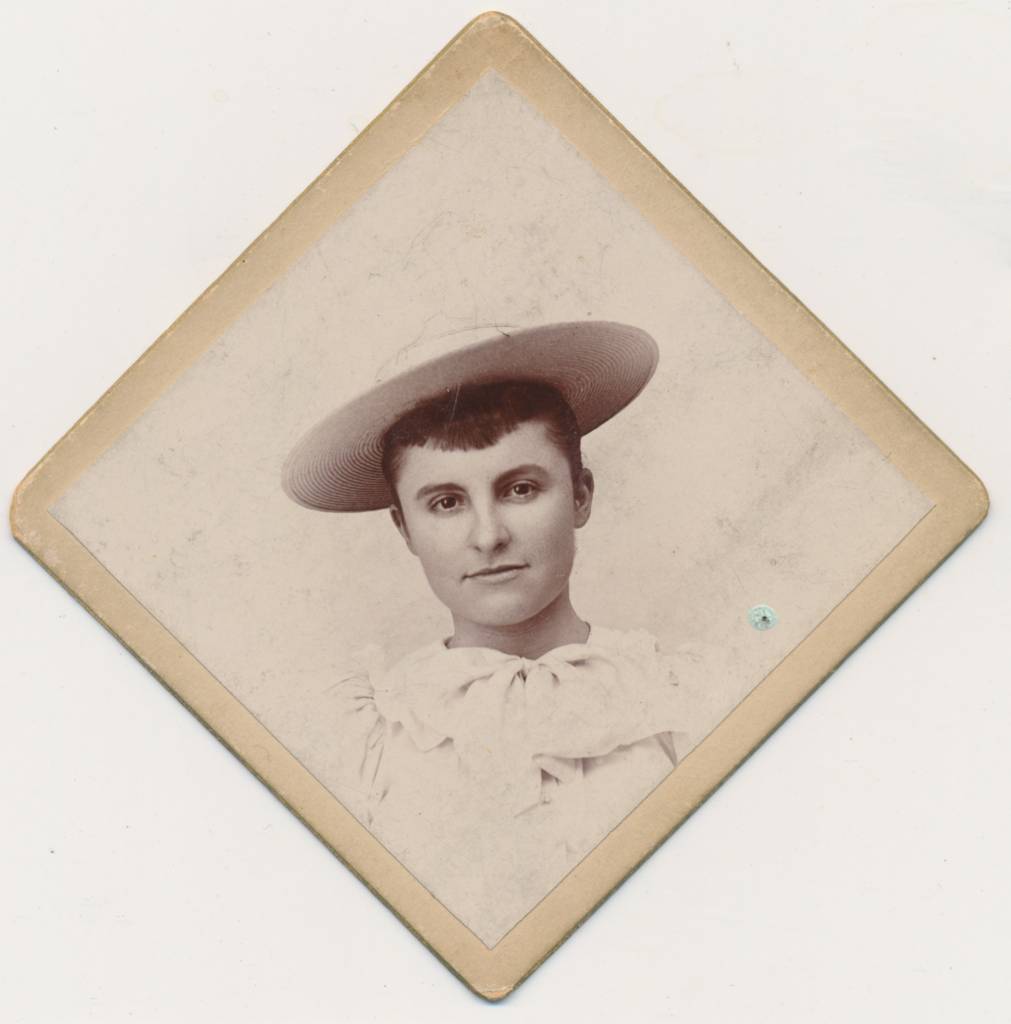 I suppose it could have been a studio photographer somewhere who got the diamond photo craze started. Or the impetus could have come from some card stock jobber who wanted to sell more photographic supplies. Almost from the very beginning photographers have been shaping photographs, sometimes using round or oval frames. Perhaps there are early examples of photographs framed as diamonds. Regardless, sometime towards the latter half of the 1880’s (I’m guessing), suppliers of card stock began selling diamond mounts, and studio photographers began taking them, or rather, cropping them to fit the mounts.. Most of the photos probably were taken originally to fit cabinet card mounts. My earliest dated example is from 1891. This woman’s name, by-the-way, is Nyra M. Hartman.

Here is a photograph that is everything I like about the diamond photographs. The oversize image dominates its space (and the dark tone overpowers the lighter tone of the surrounding card mount). The woman gazes directly at the camera. The lace collar of her dress provides an additional frame for her beautiful, intense face. I’ve had this image for a while, which means that it most likely comes from west of the Mississippi. Life, in that place, at that time, was hard, difficult at best. It could be brutal. “I’m up to the task,” she seems to say. Her name was Ada Church. [Ada Church] 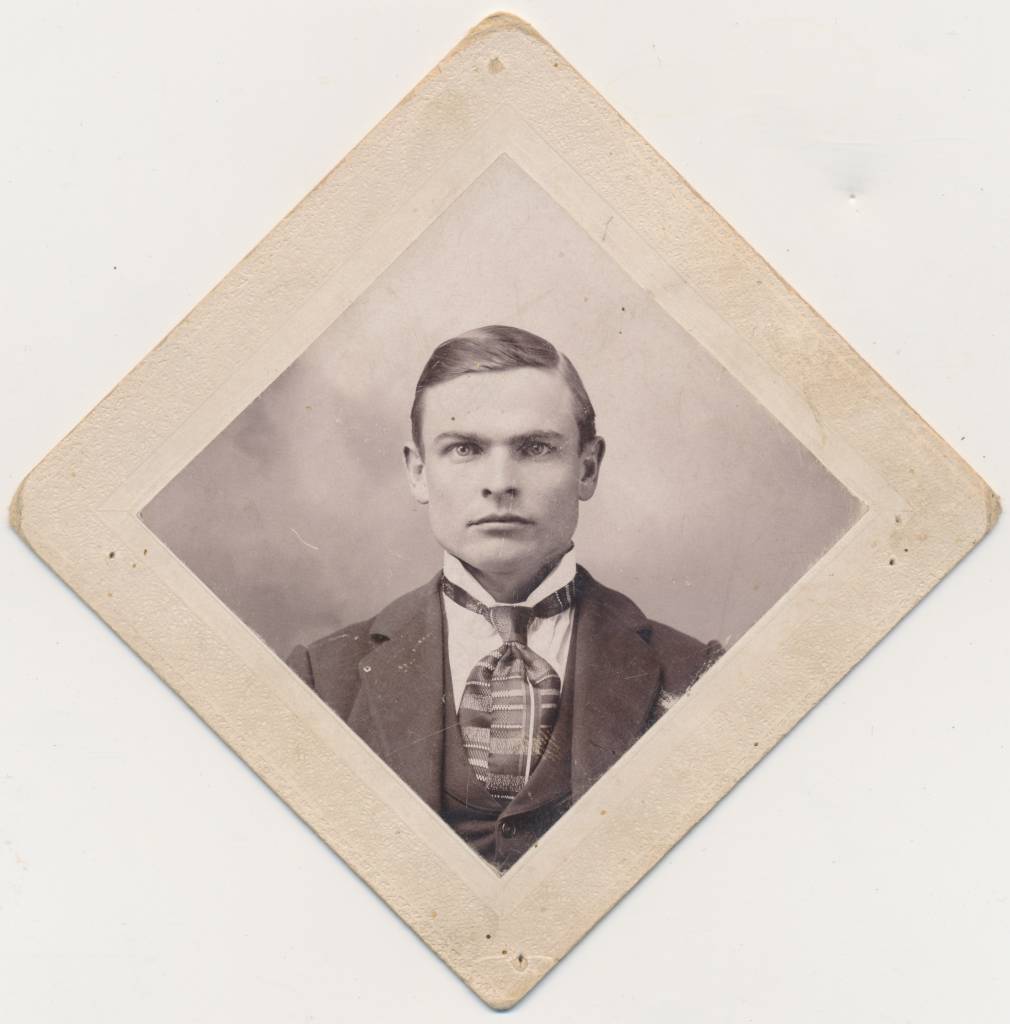 Though this photograph comes from France, this gentlemen has the same intense, direct gaze as Ada Church. I find that gaze appealing. “I am,” he says, without equivocation. His resolute cravat underscores the point. [Big Fat Cravat Guy] 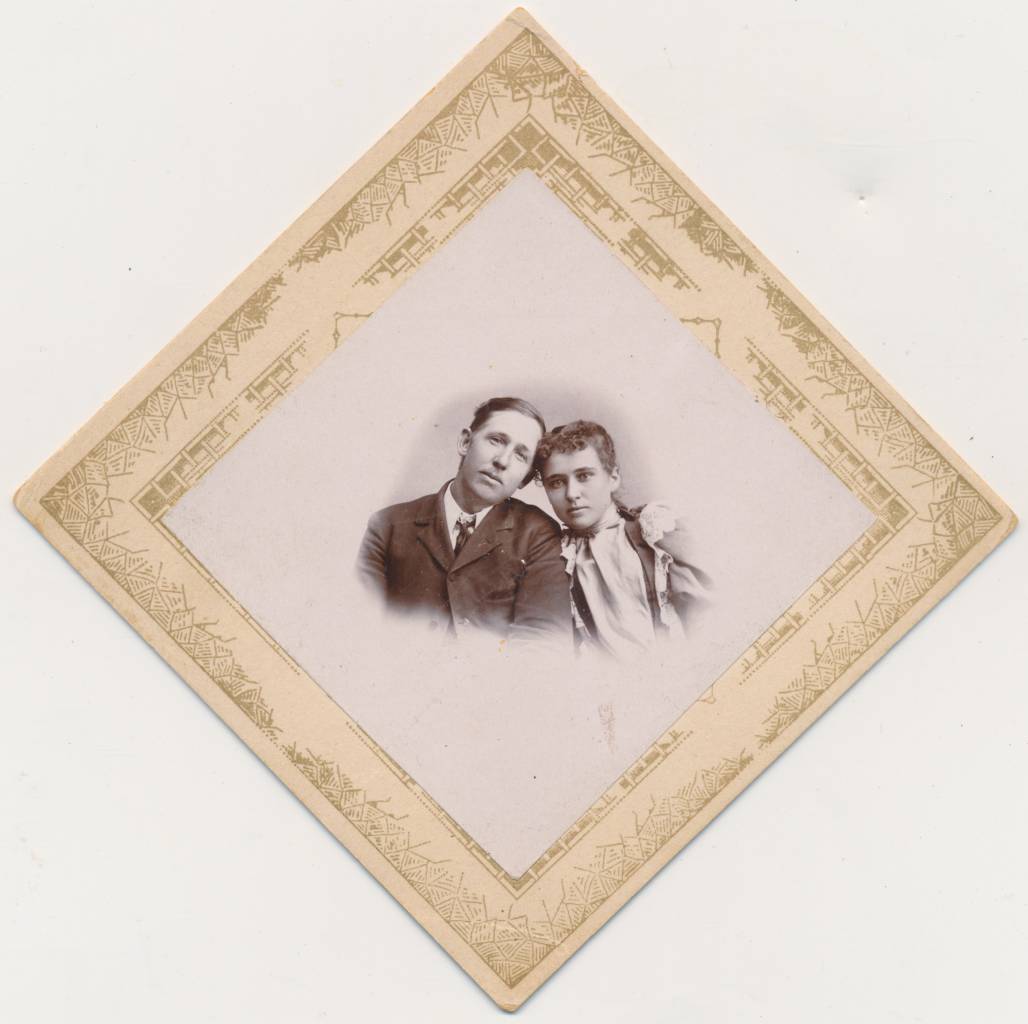 Most photos in diamond mounts weren’t taken specifically to fit diamond mounts; at least that’s my guess. Here is one that well might have been. This degree of affection between the couple is unusual, for the time period. Note that the card mount is the same as that for the Ada Church photograph. I don’t think I bought the two photos together. The supplier for this card mount perhaps had wide distribution. [The Affectionate Couple] 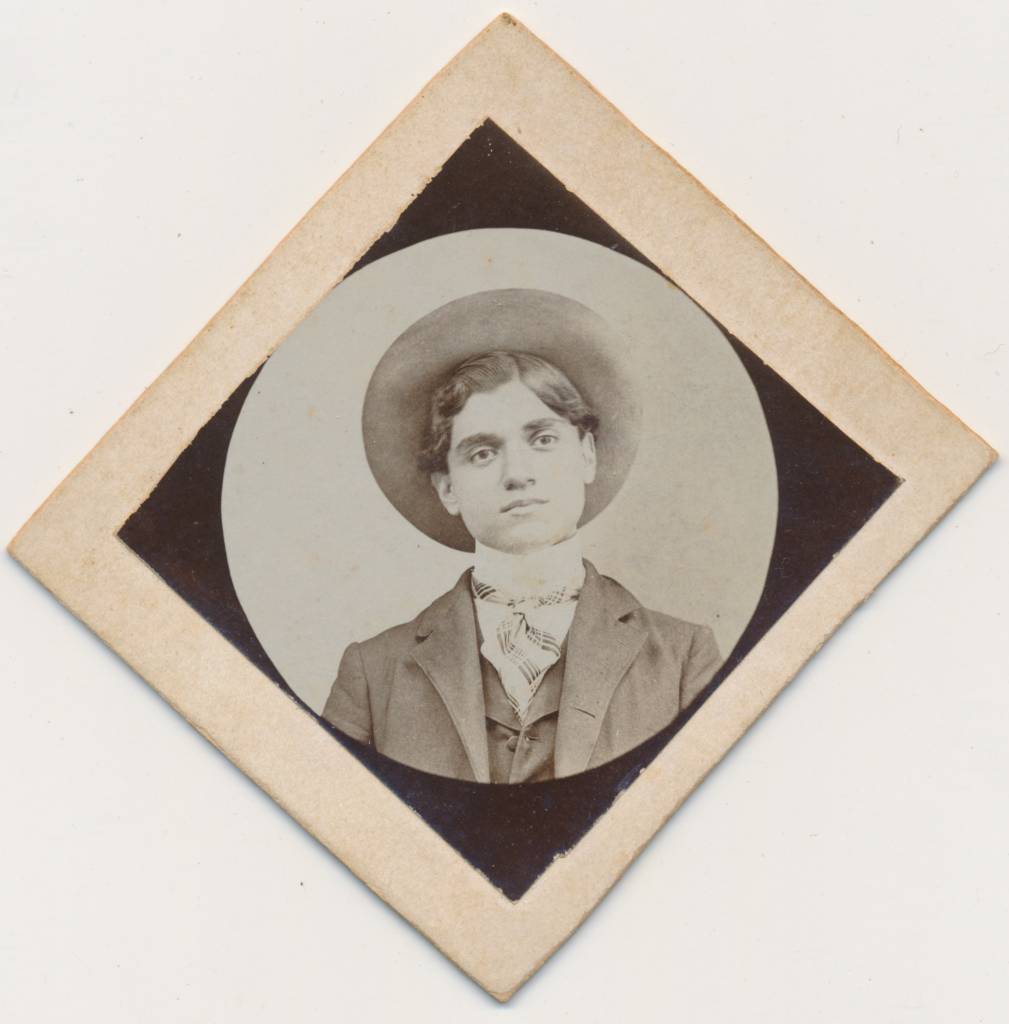 Everything is slightly, and charmingly, askew with this one. Note that the card mount is miss-cut.. I always want to think the badass ones are from Oklahoma. [The Oval-Faced Guy In A Circle In A Sort-Of Square] 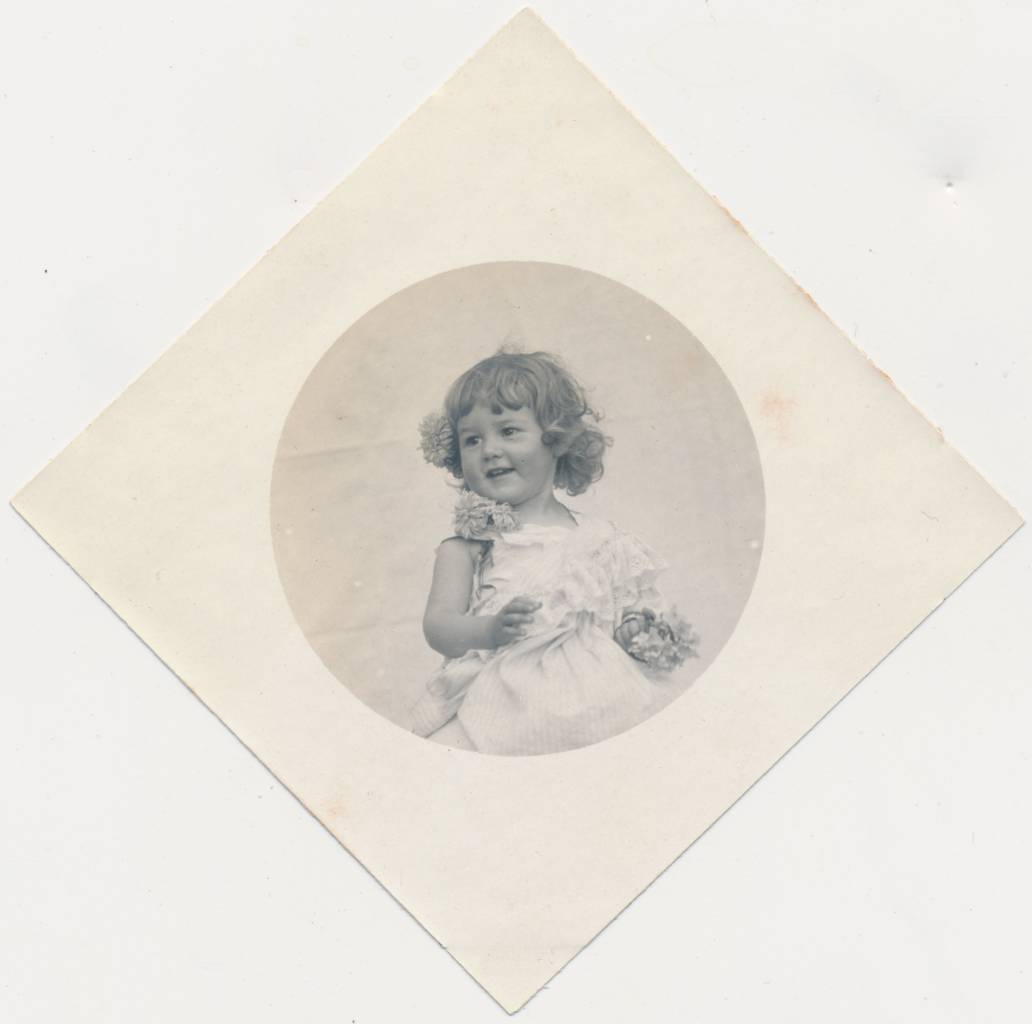 Perhaps unsurprisingly, this smiling cherub hails from France. The classic period for the diamond photos is 1890 (give or take) to 1910. If this example is from that period, the candid pose is unusual. [The Carefree Cherub] 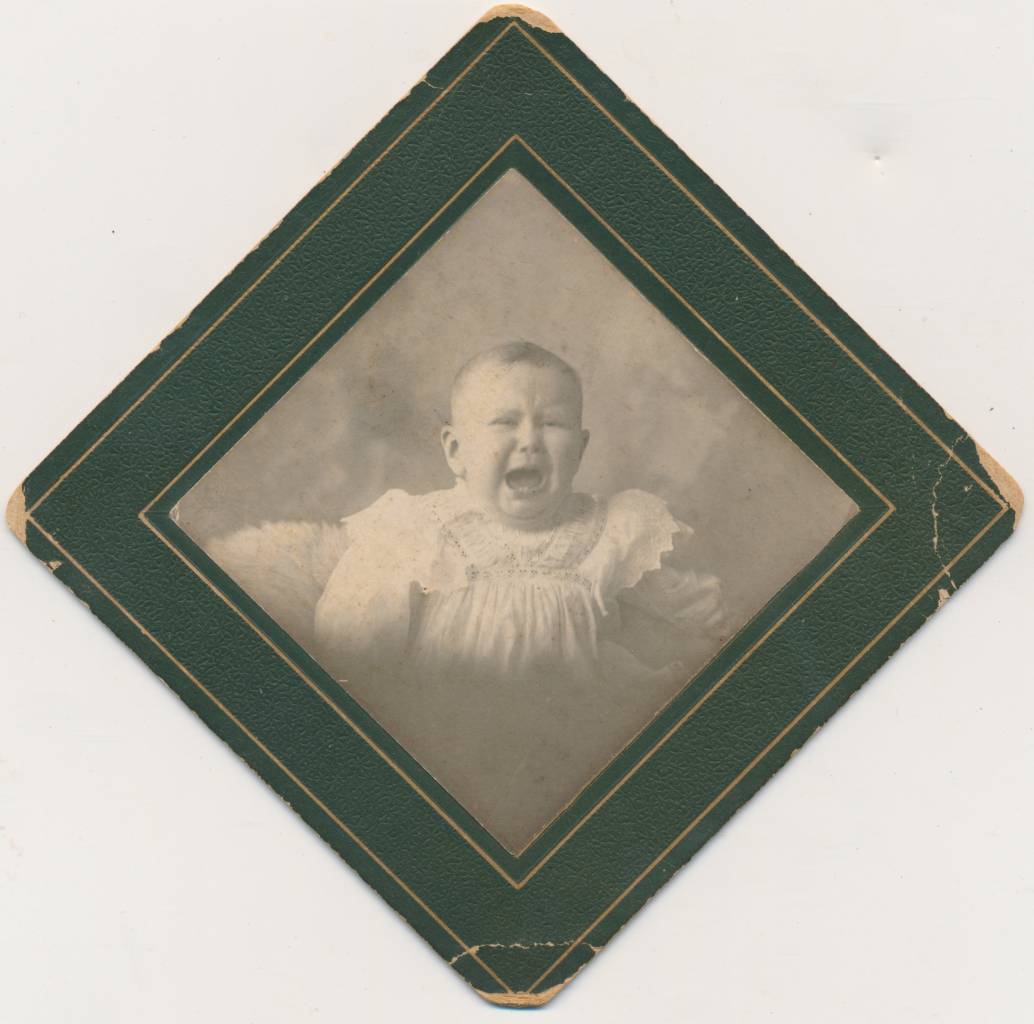 This young gentlemen needs no explanation. Information written on the back of the photo reports that he is “Willard K. Van Somebody [perhaps Gall or Gula], 1 year 1 mo. old.” A different hand has recorded the date, October,, 1898. [The Wailing Baby] 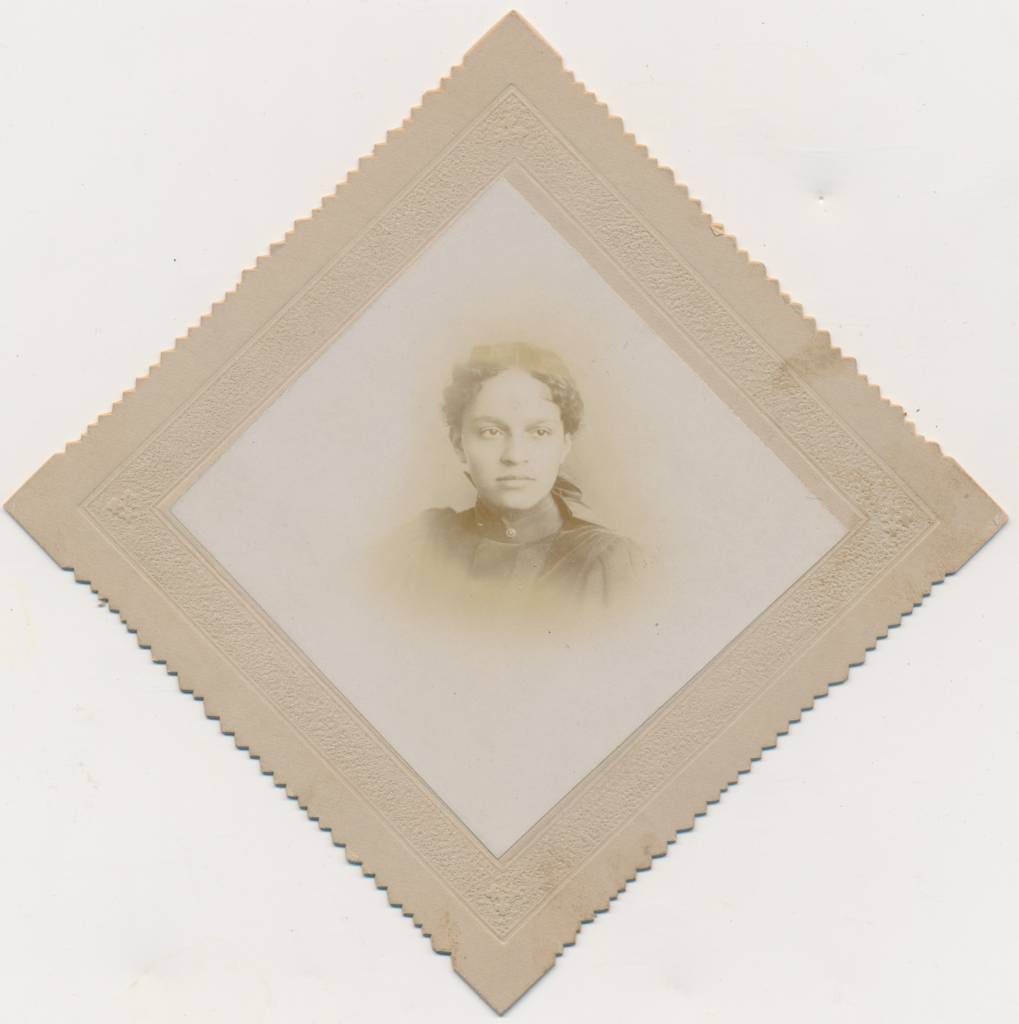 The off-center framing of the image does not diminish this young woman’s extraordinary beauty. She is “Mabel I. Carson ,Age 16.” The date is given as Aprill 22, 1896. At a certain point I started buying the diamond photos on Ebay, so this may be one I saw there and felt I had to have. [Rare Beauty] 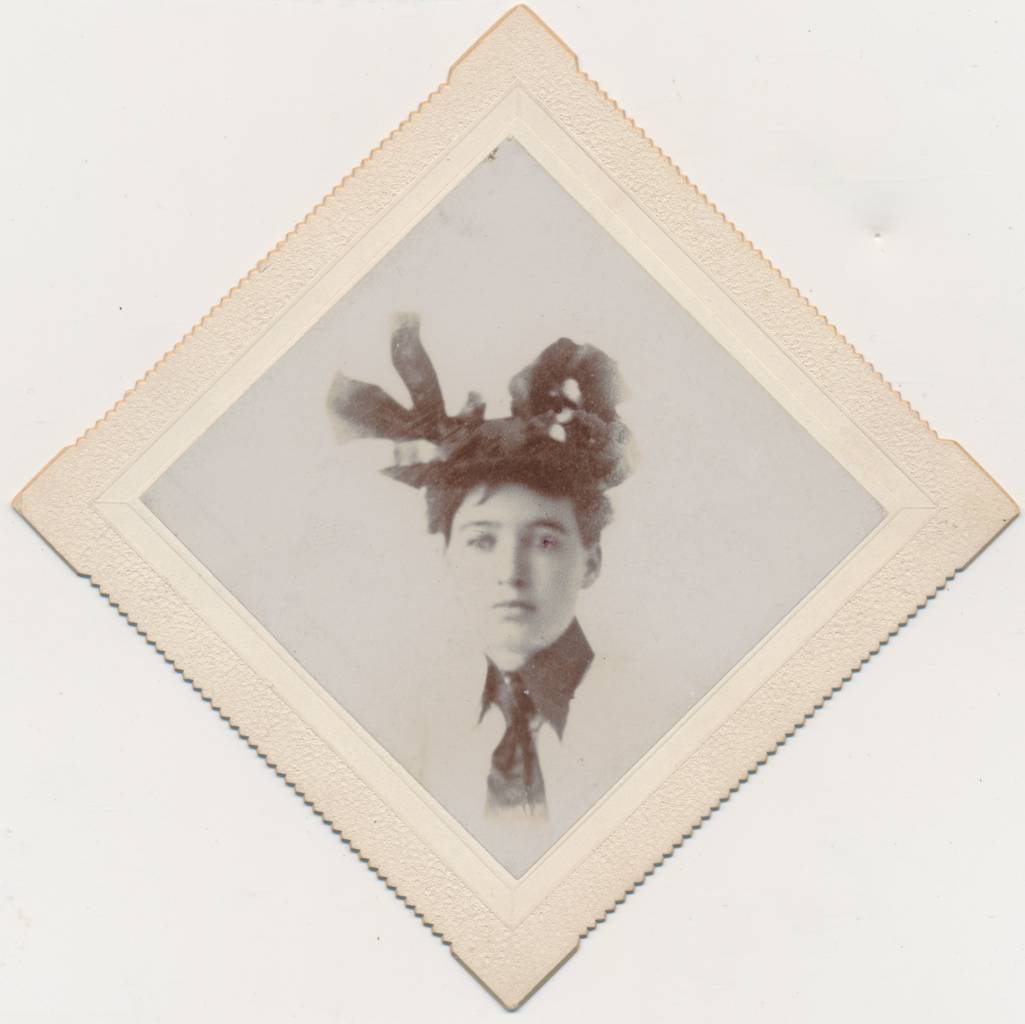 The back of this one has a penciled price — $3. Also, unusually, there is this printed designation: “J. A. Heislet, Photographer, Bangor, Pa.” I remember being excited the moment I laid eyes on this one. [A Glum, Wanton Beauty] 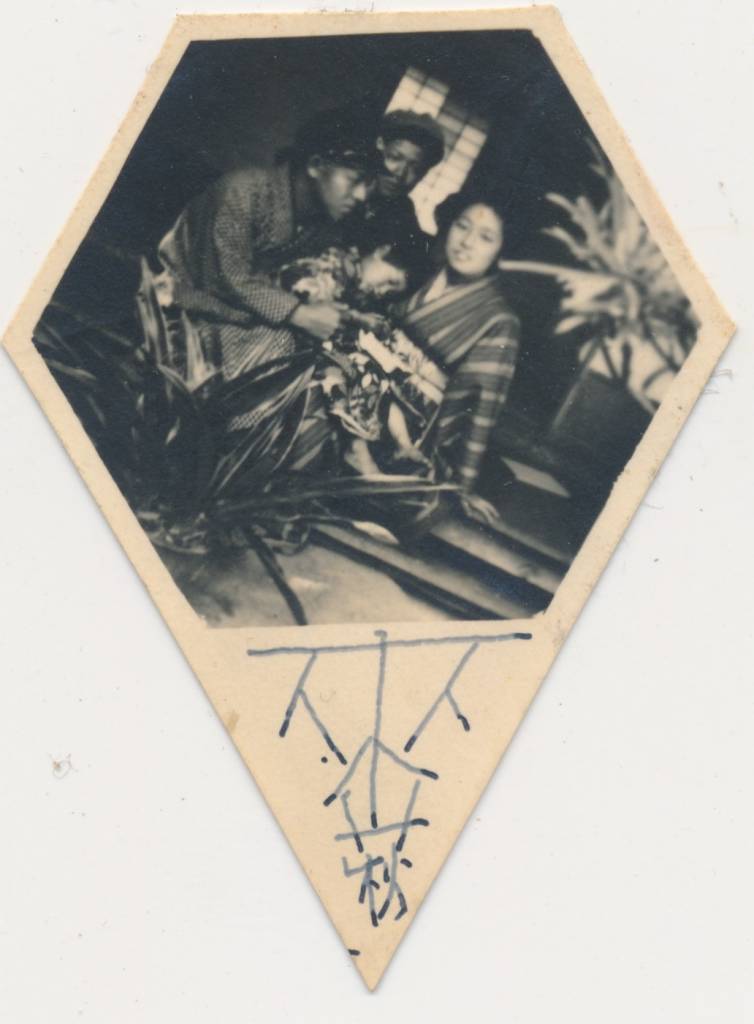 One of my favorite French dealers said another dealer had given him several very tiny little Japanese photos, all in different, eccentric shapes, hexagons, octagons, what-have-yous. Would I like to have them? He sent them to me as a gift. I’m not quite sure what’s going on in this one, but i like it. I guess it qualifies as a diamond. [A Real Diamond Diamond] 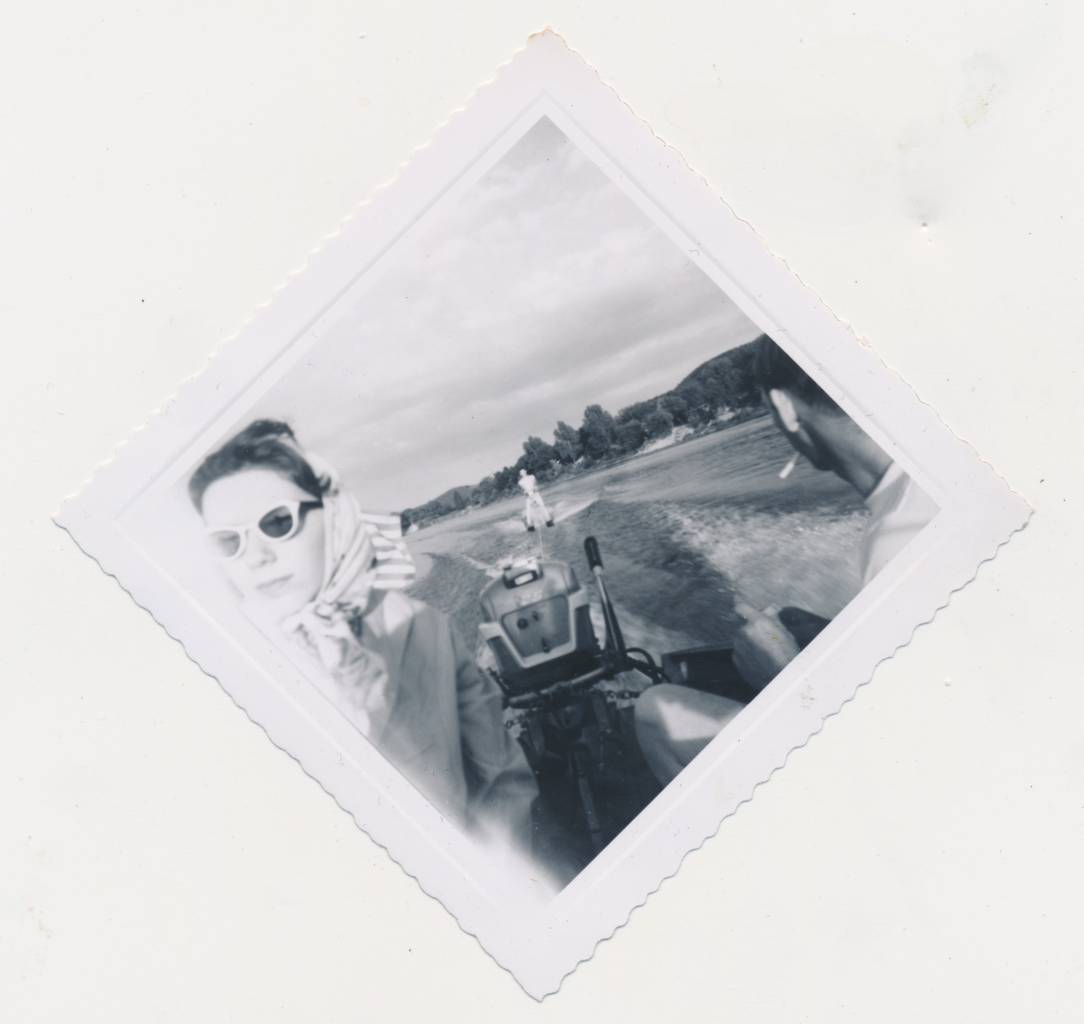 After 1905 – 1910, the diamond photos as a studio product died out. Everyone had her own Kodak. On rare occasions, people could take their own diamond photos, if they were using a square-format camera. All they had to do was rotate the camera 90 degrees. Here is an American example. [The Water Skier] 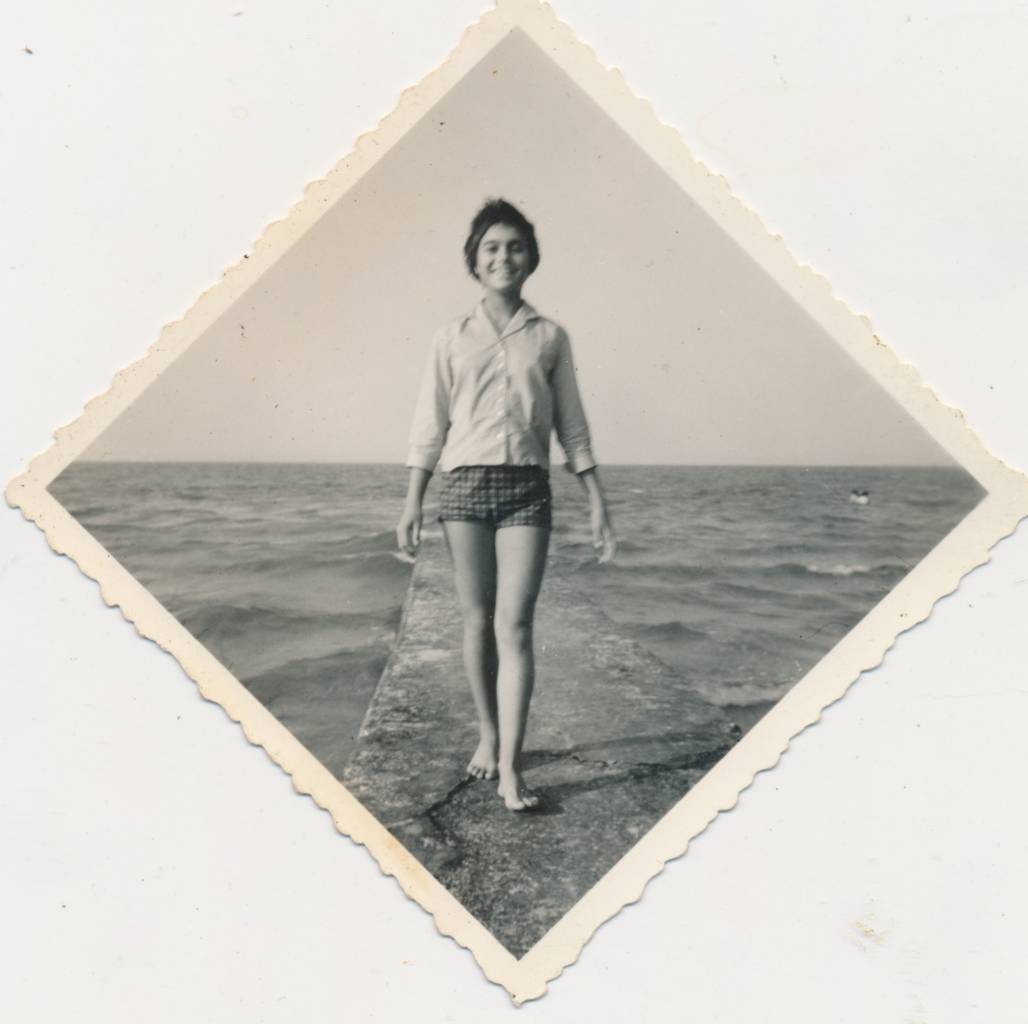 The diamond photo in its modern incarnation has been especially popular in France. My dealer buddy wanted a little more money for this one. I think he thought it was best-in-class. I won’t argue. [The Water Walker] 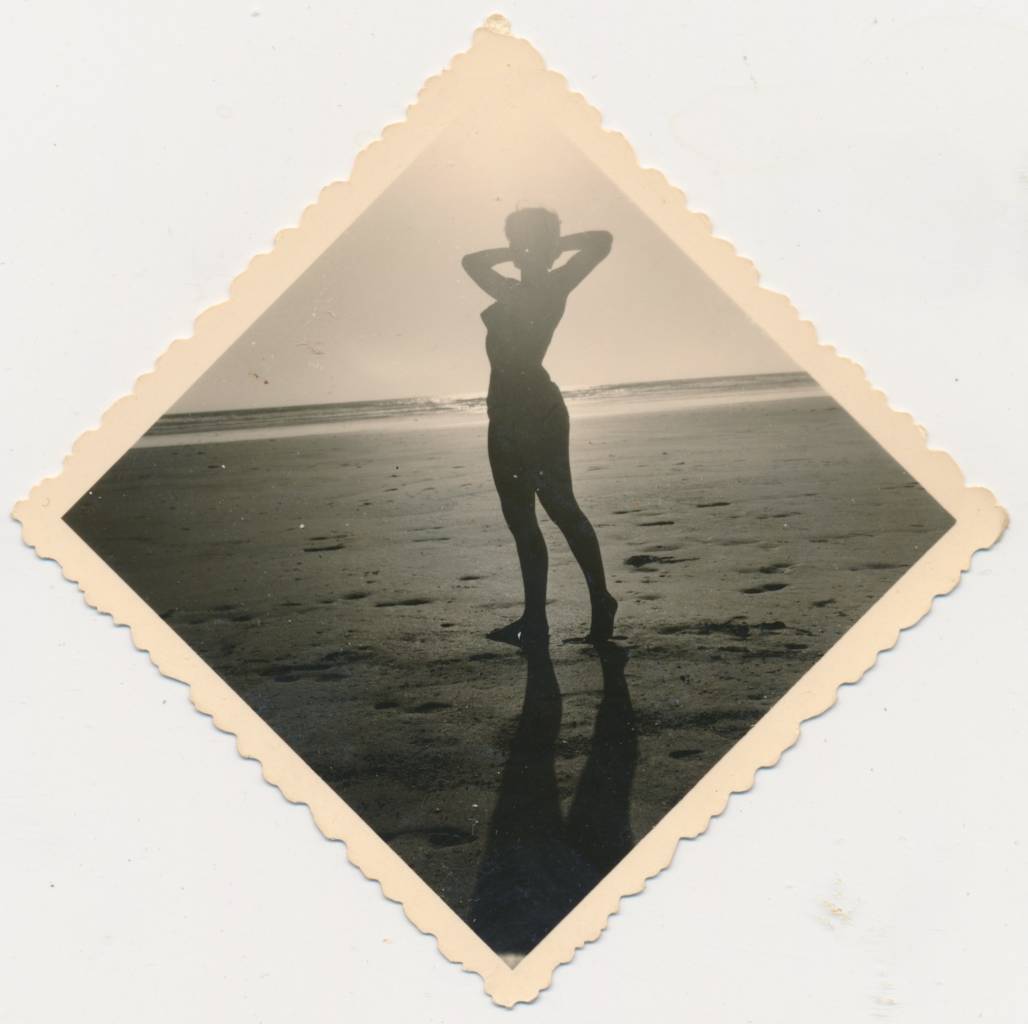 Another example from France. Here, the subject is wearing a burkini. [The Burkinied Lass] 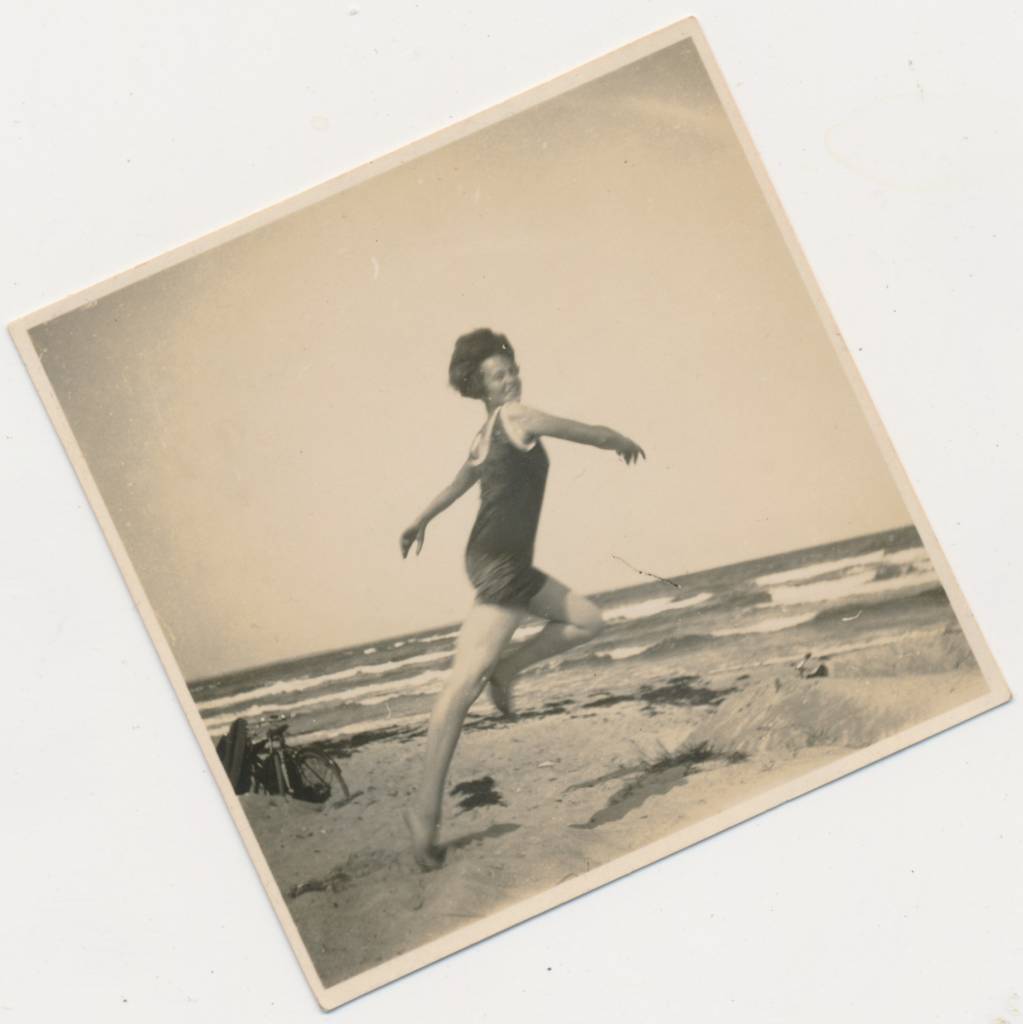 And finally, again, another French example. What are the rules, if not to be broken? [Tilt, Game Over]

All photos via long-time vintage photo collector John Van Noate, who posts as mrwaterslide on Flickr.