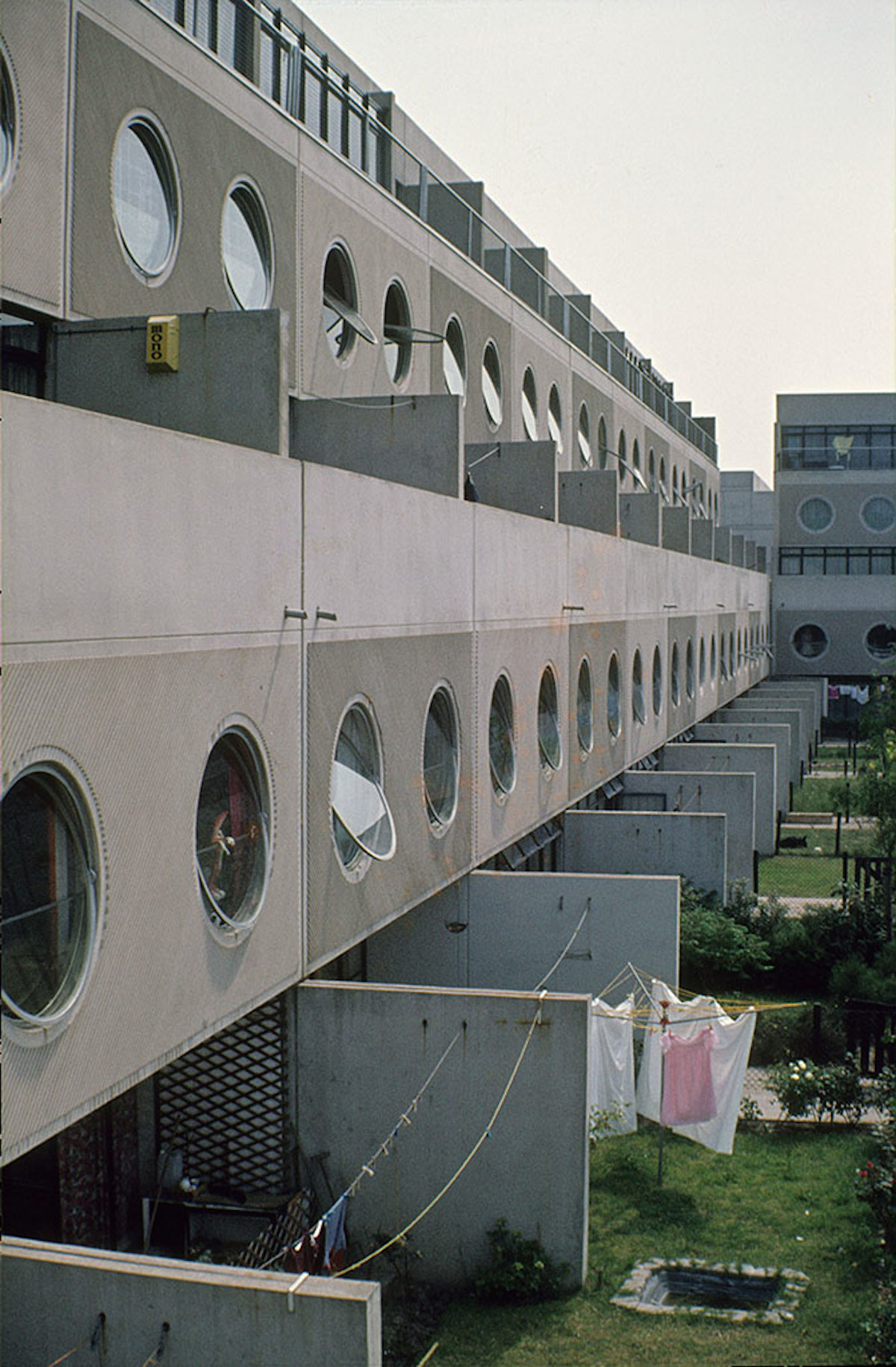 In July 1981, in the offices of the British architecture newspaper Building Design, I received a letter from James Stirling. It enclosed a clipping from the Runcorn Daily News, a local newspaper in the north-west of England near Liverpool. “I hope your readers are as amused by it as we are,” Jim remarked drily. I unfolded the clipping. The headline read: ‘Police Girl saw “God-like Pose” of Nude Man’.

The story concerned a court case. A Mr. Dutch – 36 year old married father of two and a resident of Stirling’s Southgate social housing project in Runcorn – had repeatedly been seen disporting himself naked in one of the two large round porthole windows of his apartment, coincidentally at the very time each morning when a busload of hospital nurses was going past. Tiring of this after a while, the nurses alerted the police, who with fine judgment sent along a plain-clothes female officer to check up. “He appeared, nude, waved at me and smiled,” she told the court. Nurse Elizabeth Dolman added that he sometimes stood in the window with his arms and legs outstretched. “He just looked like God,” she said. It was, as we say in England, a fair cop. Despite the smile, the wave and the Godlike pose, Mr. Dutch was found guilty of “indecently and lewdly exposing himself”.

Jim would have chuckled to himself that it wasn’t God that Nurse Dolman was thinking of, but Leonardo da Vinci’s Vitruvian Man – the famous drawing of a naked man superimposed on a circle and a square, an early proportioning system. Classical proportioning drove the design of the project, so it is not impossible that Vitruvian Man influenced his design of the circular windows. So he would have laughed out loud at the defence offered in vain by Mr. Dutch’s attorney, which was to blame the architect. The porthole windows, he said, “seem to have been designed specifically to bring such cases as this to court.”

Of course we ran a front-page story on this little absurdist drama, written by my colleague Ian Martin who is today a television comedy scriptwriter among much else. But if only Mr. Dutch’s Renaissance-induced exposure was the only problem faced by this 1,500-unit, 6,000 population housing project (called an “estate” in England), which although first commissioned in 1967, had only finally been completed in its final phase in 1977. It went downhill fast from then on, and in 1989 was slated for rapid demolition. What on earth went wrong? 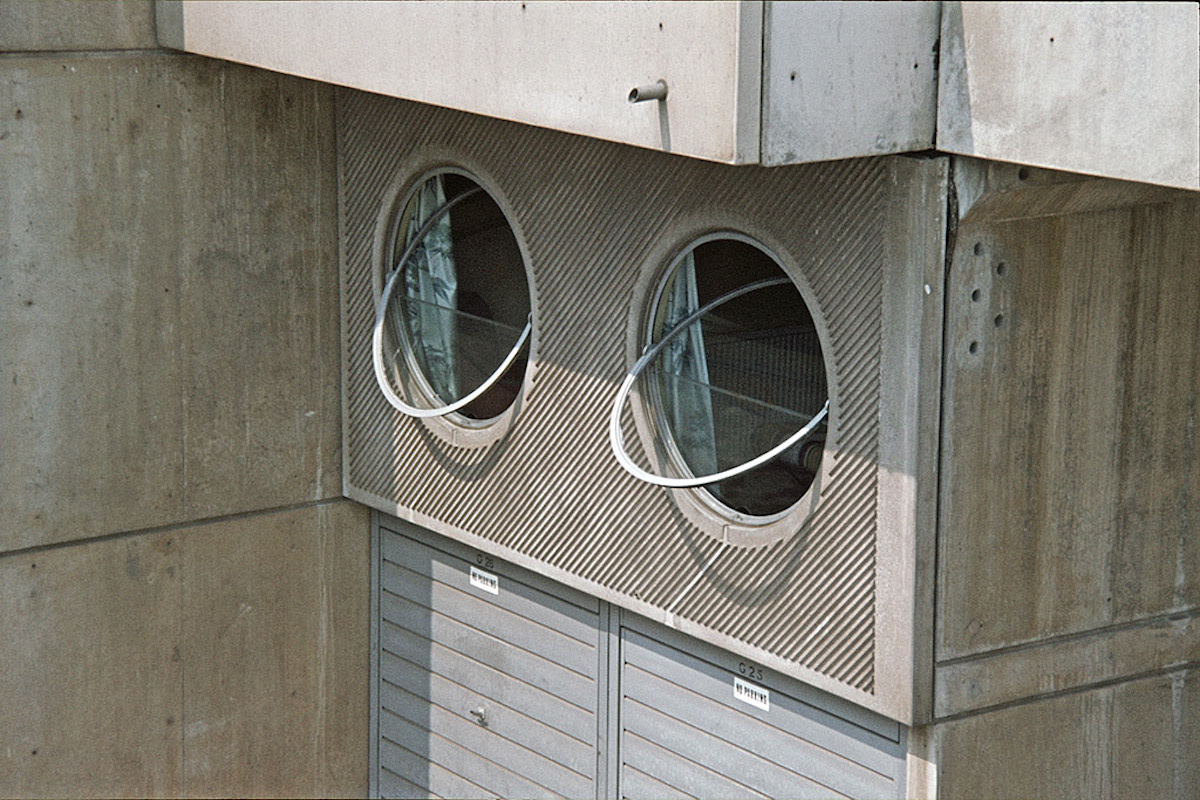 Its proportions, its sequence of squares and its abstracted-colonnade main facades were based on the Georgian precedents of the cities of Bath and Edinburgh. It offered a high-density, low-rise (five-storey) solution to the national housing problem at a time when Victorian ‘slums’ in nearby Liverpool were being demolished in swathes, and when many public housing authorities were still moving their tenants into new tower blocks which were themselves to prove troublesome. Southgate was part of the New Town of Warrington and Runcorn, which was intended to mop up overspill from Liverpool and Manchester in much the same way as the more famous New Town of Milton Keynes took its population from both London and Birmingham. The Southgate Estate formed the residential centre of the new town, hence the high density. It was very unlike an earlier small social housing scheme in the north-west by Stirling with James Gowan, the redbrick ‘Preston Infill Housing” of 1957-59 (also now demolished) except in one regard: both schemes involved a ‘sandwich’ of apartment types and a raised access deck.

Southgate was intended to be built rapidly in order to provide a population to use a linked adjacent new privately-developed shopping mall. The construction method was largely dictated by the client, but Stirling and his partner in charge of the project, Michael Wilford, worked hard to provide architectural interest in the repetitive elements, as the Georgians did. The first phases of Southgate combined in-situ and precast concrete construction with the colourful grp (glass-reinforced plastic) panels beloved of the nascent high-tech tendency in British architecture. Stirling used such plastic panels elsewhere, for instance on his Olivetti UK training centre. The final phase abandoned concrete entirely in favour of grp-clad timber frame. Southgate was, then, a project on the cusp of different approaches – stylistically anticipating the postmodernism of the Italian school while incorporating high-tech elements, and constructionally combining heavyweight and lightweight techniques. 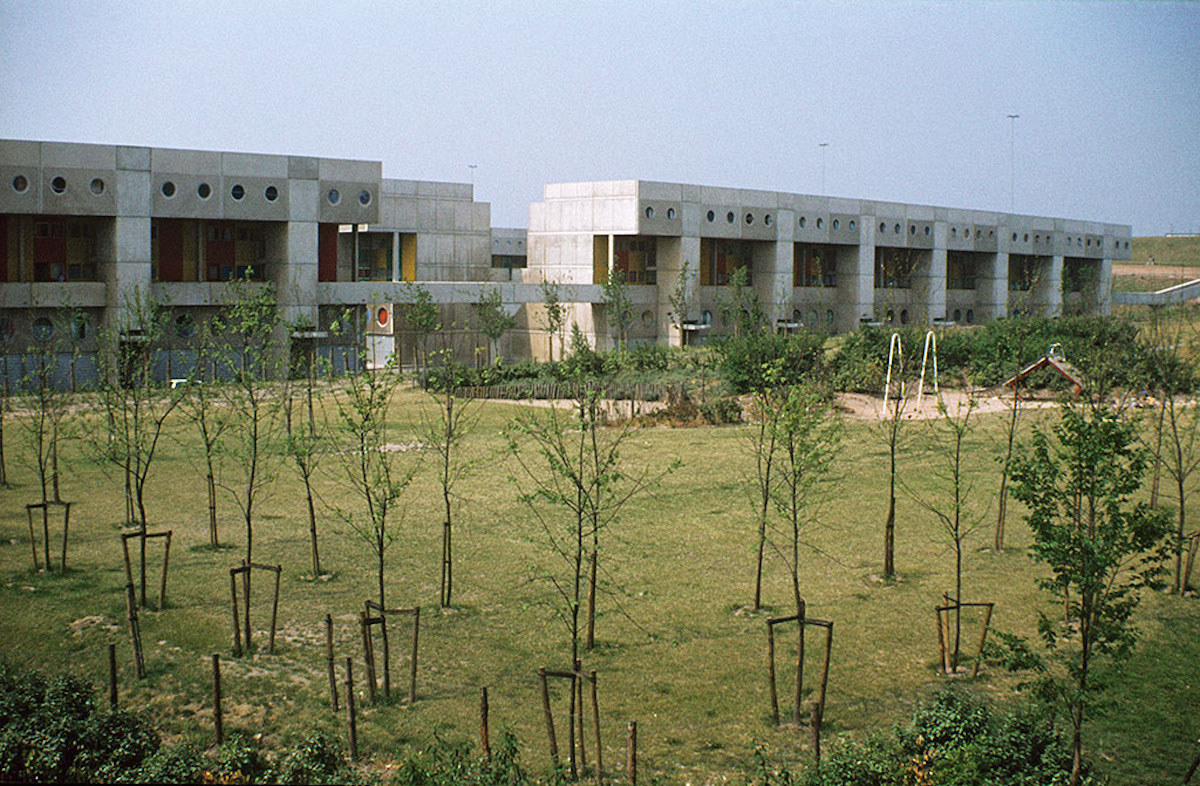 When first built, Southgate was generally well received by the international critics, less so by the British. “Jim the Great”, gushed Giovanni K. Koenig of Casabella in 1975. “Big Jim – magnificent in the mock-heroic vein – still brings down the house and shows no signs of fatigue.” In America, we got this: “A refreshing bit of urbanity in a type of situation which so typically has tended towards a dispersed suburban plan,” wrote Sharon Lee Ryder in Progressive Architecture in 1976, while noting that “The bureaucracy maintains tight control over the cost. For this reason, an industrialized building method was used…”

The British were much harder on Stirling. “It is difficult to know whether the system details took over or whether one’s expectations are overheated by the grand Casabella-esque facades of the concrete squares, but round the back on staircases and along the pedestrian street, there is a great deal that is awkwardly joined and put together and skimpy,” wrote Sutherland Lyall in Building Design in 1977, though he added: “Everybody is settle ing into their great squares with a remarkable degree of satisfaction.” Nor did Britain’s influential Architectural Review (AR) mince its words. “James Stirling’s international fame rests on a mere handful of buildings and a few unrealised projects,” it wrote, anonymously, in 1976. “His brilliant, and sometimes outrageous, manipulations of form have made him the enfant terrible of architecture, a title which he has held unchallenged for a decade or more but which, to judge by his latest work published here, he is about to lose…Runcorn is perhaps inevitably James Stirling below par.”

The AR quoted a ‘community worker’ at Southgate who, though largely upbeat in his or her assessment, issued what turned out to be a prescient warning. “Great skill and understanding of young people will have to be shown if their growing numbers on the estate are to be catered for. Bored and unoccupied, they could cause huge problems on an estate designed in the way Southgate is.” With a deck-access raised street to make mischief in, in other words.

The huge problems duly arrived. As in parts of American cities, large social housing projects in Britain – particularly those of deck-access industrialised construction such as this – became a byword for poor management. The Southgate Estate rapidly became socially unstable, families moved out, homes fell empty, its oil-fired centralised heating system (specified by the client, not the architects) proved far too costly for paying tenants after the oil crisis of the early 1970s, and so the project became a dumping-ground for society’s undesirables, housing’s last resort. Drug use and associated criminality soared. By the mid 1980s the place was a mess. 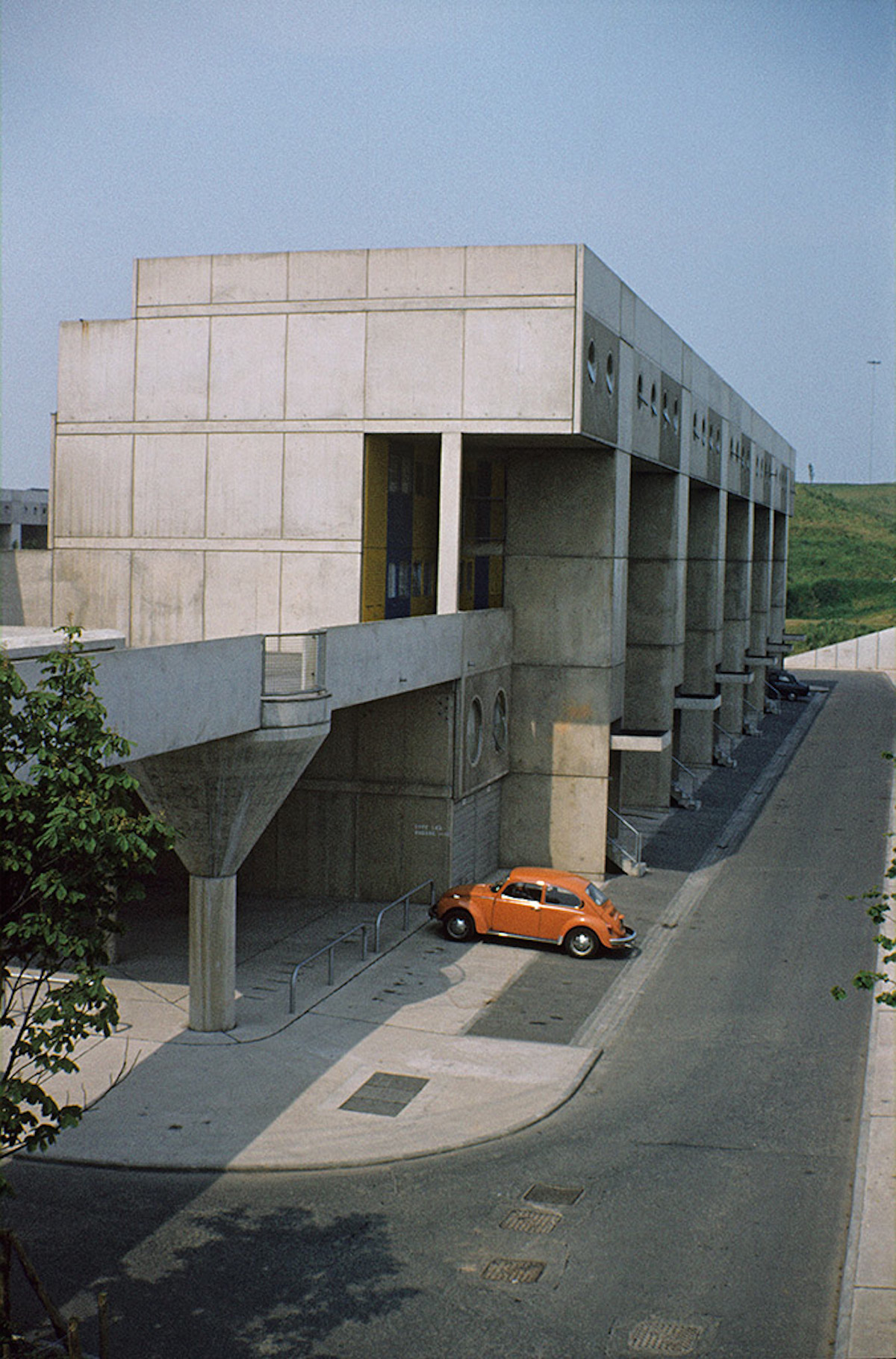 With hindsight, it is clear that all this could have been put right with better management and judicious alteration. For instance it quickly became apparent that the central band of duplexes in the sandwich, lacking their own gardens and somewhat overshadowed by the projecting apartments above, were unpopular. Accordingly Stirling and Wilford changed the design significantly for the final phase, reverting to homes with gardens at ground level. But revising the earlier phases was a course of action that seems scarcely to have been considered. The architects were not consulted on what to do. Instead, in 1989, the commissioning client, the Warrington and Runcorn Development Corporation, decided to demolish it totally. The Corporation was about to be wound up, its assets disposed of. Despite the staggering cost to the taxpayer involved, cleared land was politically more acceptable than a problem housing estate which, according to a survey carried out for the Corporation, could have cost £20m to repair and maintain over the following 15 years. The Corporation was duly dissolved by the end of 1989, demolition of the Southgate Estate began in 1990, and it had vanished entirely by 1992, to be replaced by brick-and-tile low-density surburban housing. A residents’ campaign to save and upgrade it failed. Even the architects of the replacement housing lamented that at least one square of Stirling’s composition could not have been saved.

At the time its doom was pronounced, Britain’s Architects Journal declared it “Britain’s Pruitt-Igoe” in reference to the 1950s Minoru Yamasaki housing scheme in St Louis, Missouri, dynamited 1972-76, that the critic Charles Jencks saw as the end of the line for old-school modernism. In Blueprint magazine, Brian Hatton concluded that it was in the wrong place – an unnecessary new town – and that “It wasn’t loved because it didn’t offer enough beauty to support its density.” Stirling himself pointed out, rightly, that the most problematic aspects of the design were those dictated by the client – including the social mix, the density, insulation standards, and the use of a deck-access heavy concrete prefab system. You might say: he could have refused the commission, then. But it was a challenge, and remember that in the late 1960s the widespread problems that came to be associated with such estates were all in the future. It was a new world, an experiment. 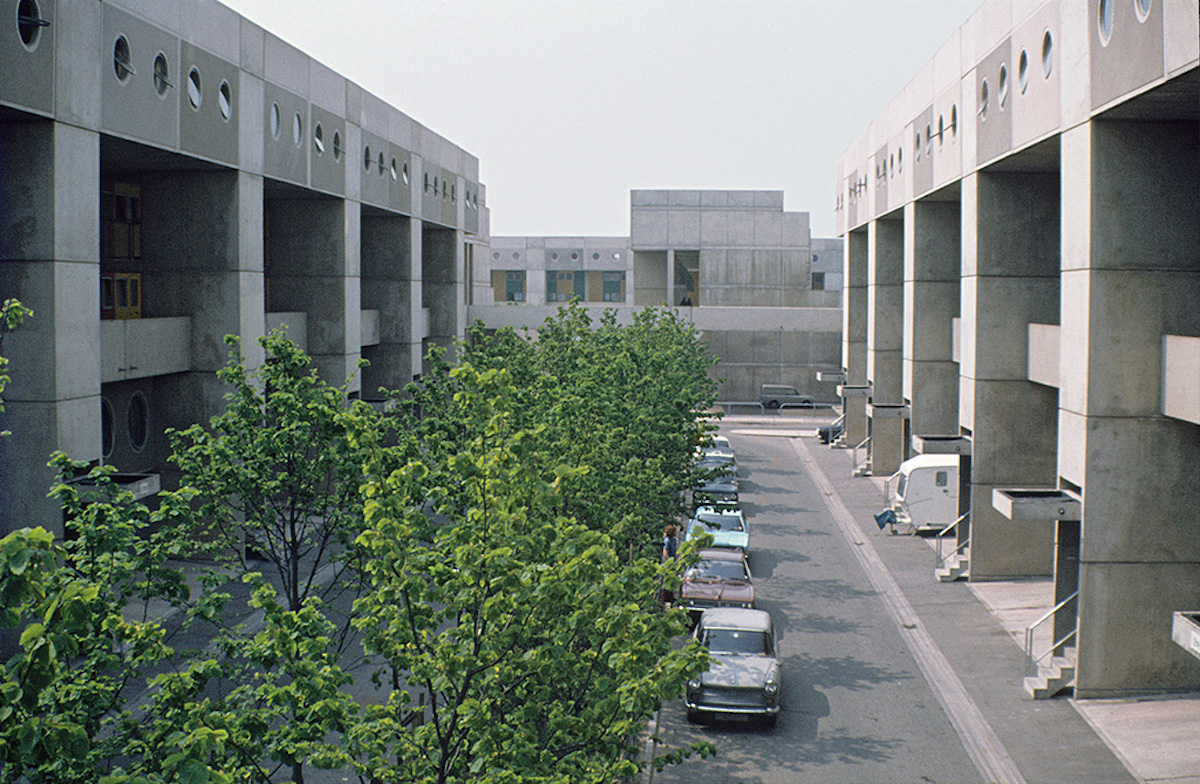 “It was a national scandal,” remarks Michael Wilford of its destruction today. “We only knew about it once the decision had been taken. As taxpayers, we are probably still paying for it. The cost of even radical alterations would have been nothing compared to demolition and replacement.” However, he does not excuse his involvement with what turned out to be, on a national level, a deeply flawed system of low-cost social housing procurement. “One worked fairly readily within the constraints,” he concedes, unprompted. And indeed, to my eyes it is clear that Stirling and Wilford produced better architecture out of those constraints than most other architects at the time working with industrialised systems. It was brave of them to attempt mass-production housing at all. I have no doubt that, had the Southgate Estate in Runcorn survived and been upgraded, it would have a very different reputation today. But I am equally clear that it was indeed a below-par Stirling project: interesting, monumental even, but lacking a sense of greatness. 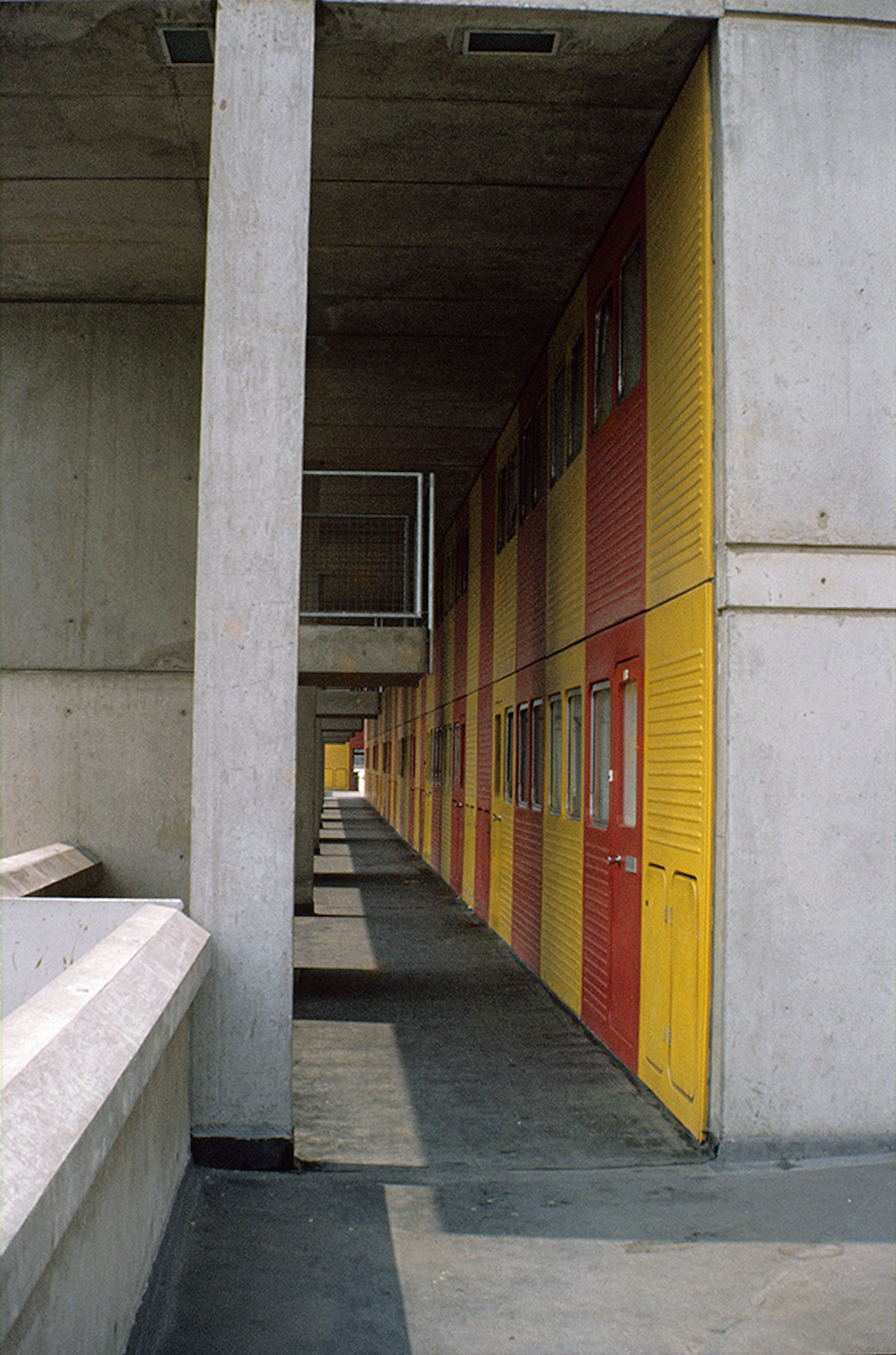 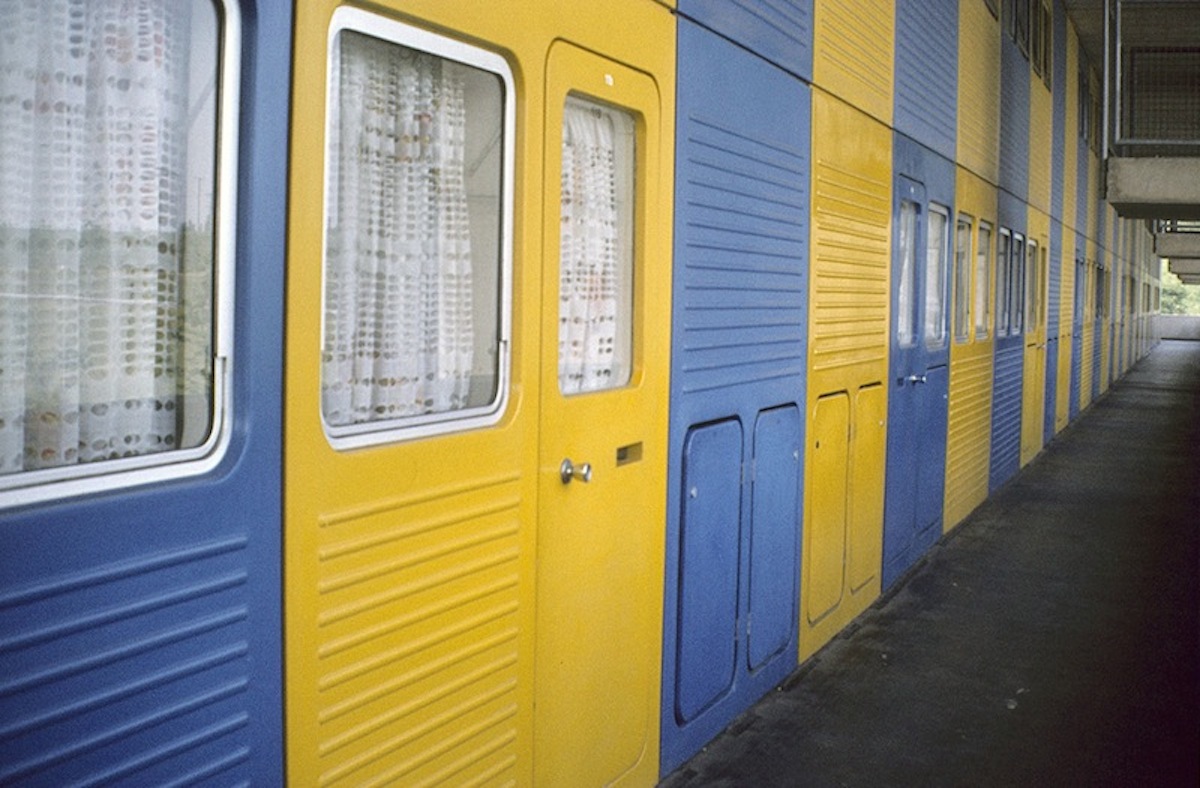 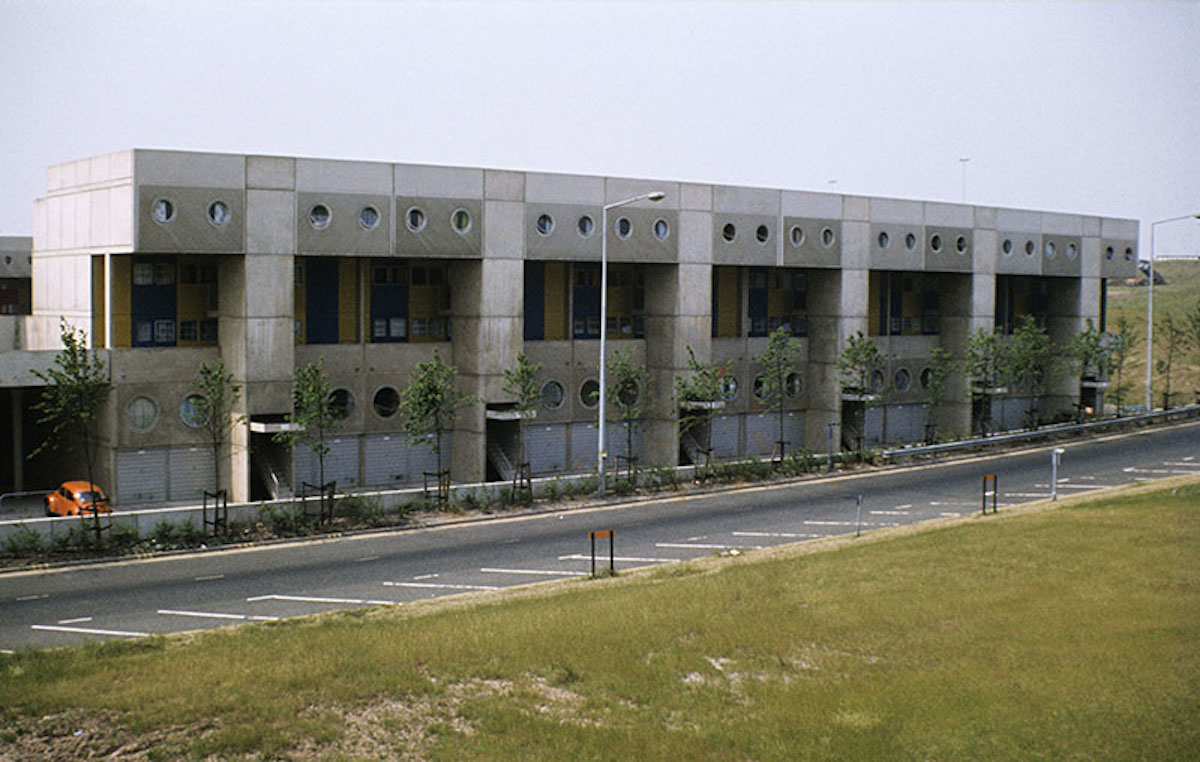 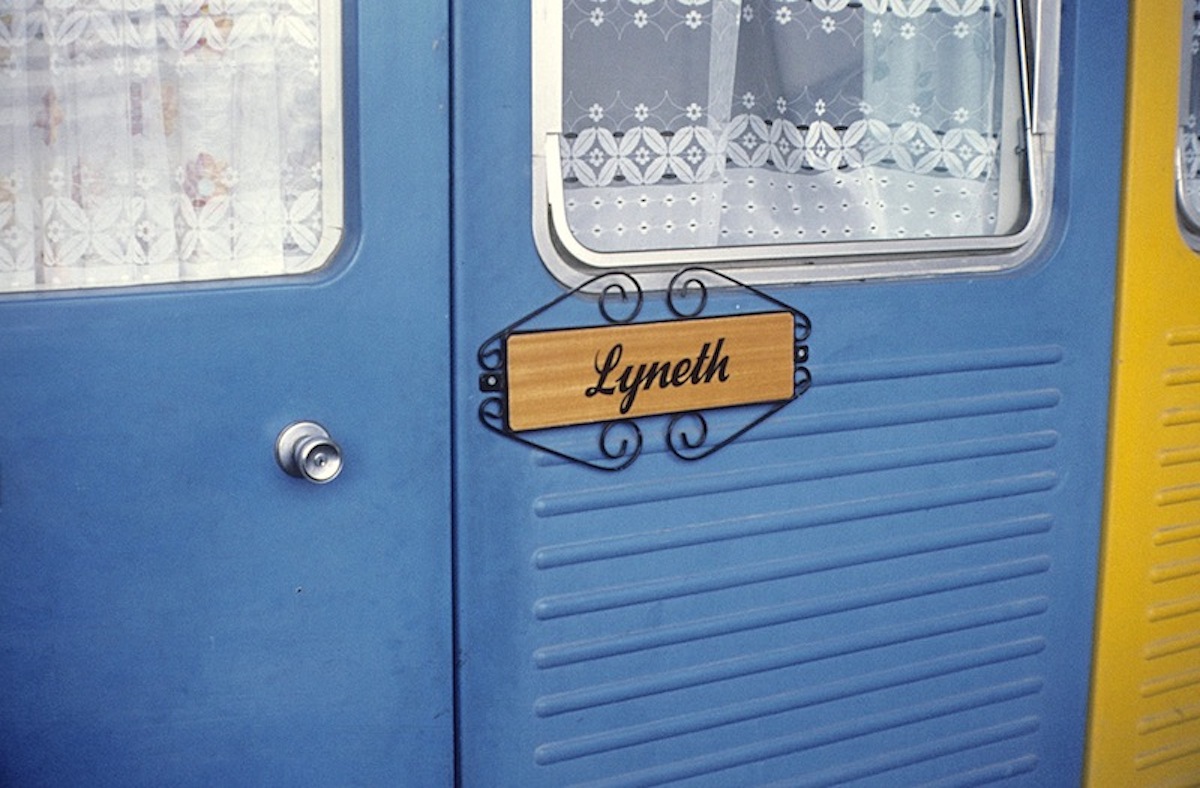 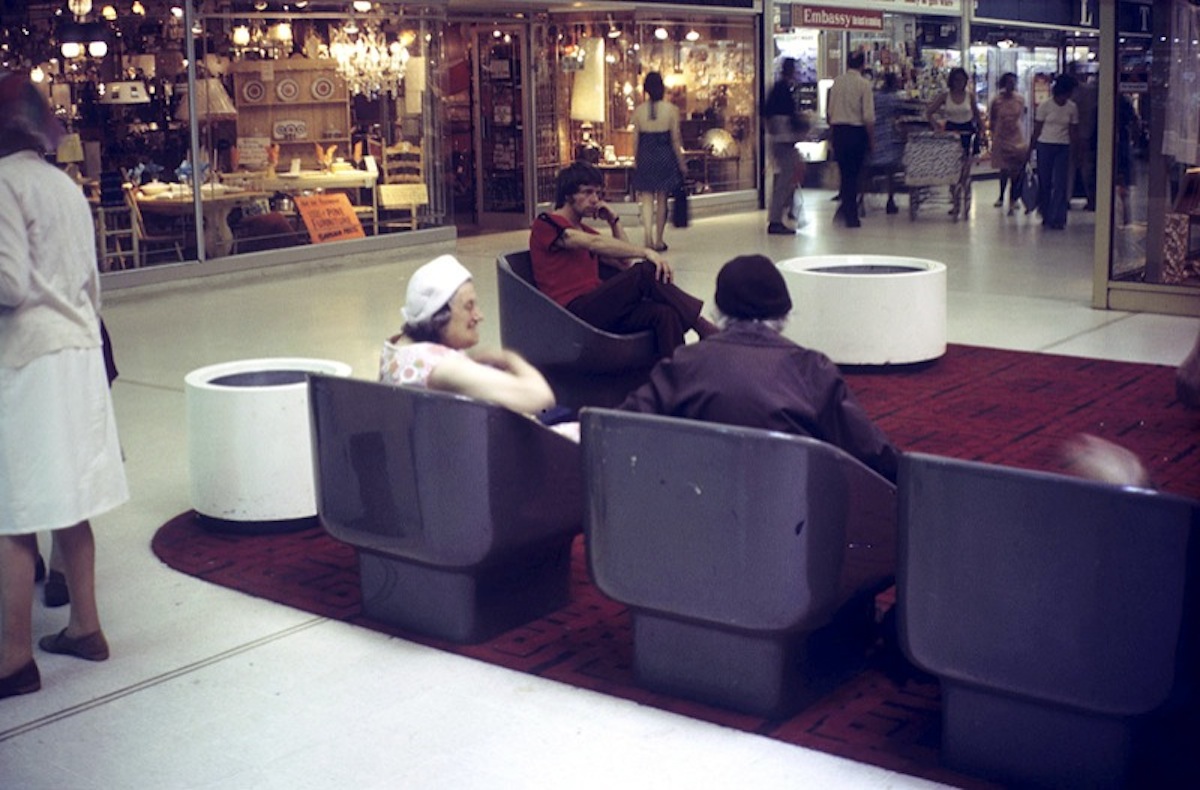 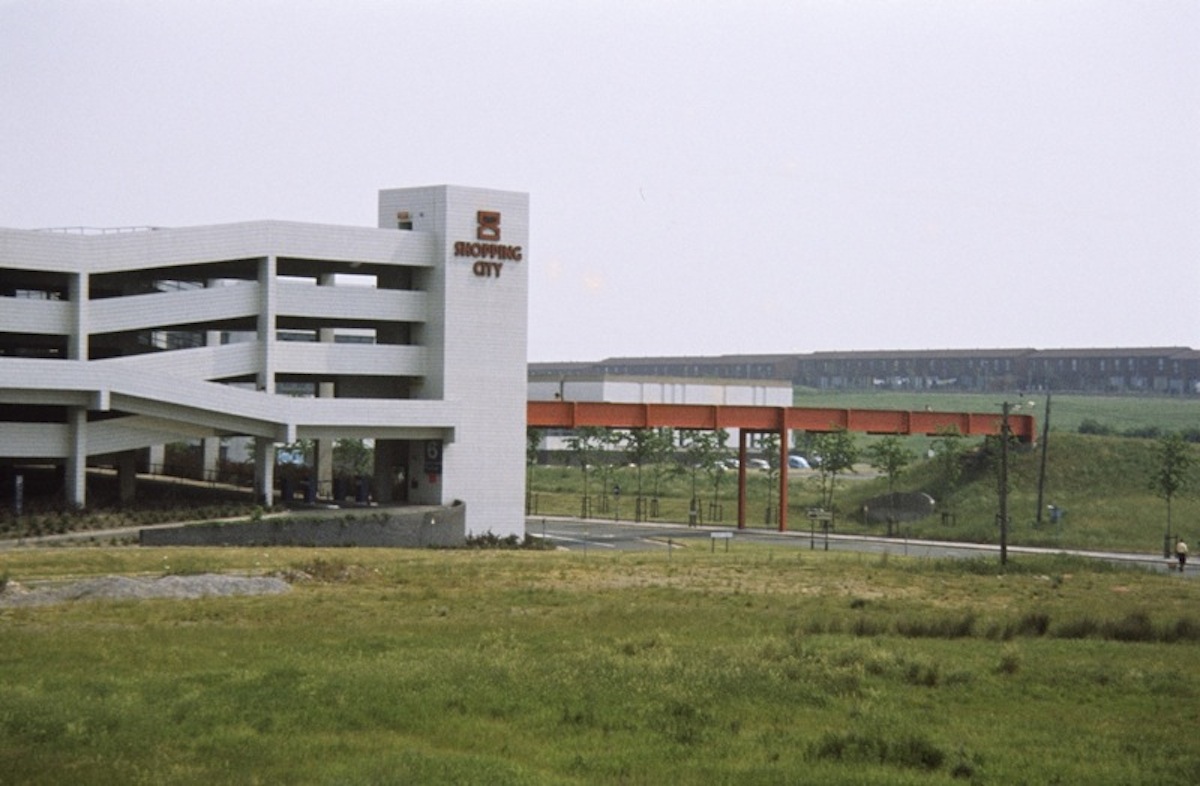