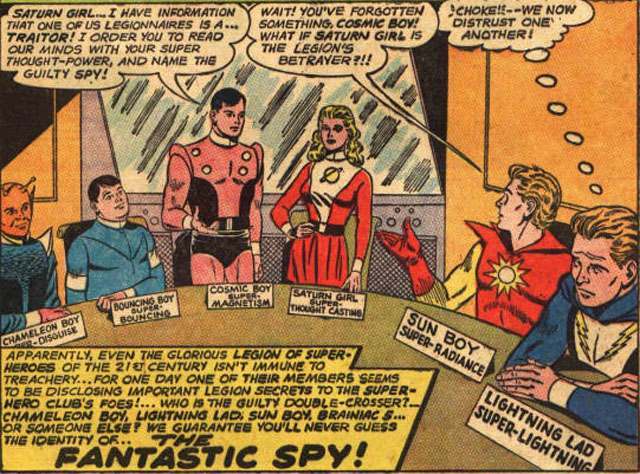 I’m so glad DC comics provided us with Lightening Lad’s power listed on a placard…. it’s “super lightening”, in case you wouldn’t have guessed.  And take a look at the other beyond-stupid superheroes: “Bouncing Boy” whose super power is apparently “bouncing”.  (Groan)

Truly, the superhero universe of DC comics in the early Sixties was a pretty sad affair.  And yet, it gets worse…

In December of 1962 in Action Comics 303, DC released into a world already crowded with lame superheroes, a young fellow named Matter Eater Lad. Yep. That’s his name. Matter Eater Lad.  What’s his power?  You guessed it – he can eat matter.

Excuse me, but I can eat matter too.  Where’s my Legion ring? 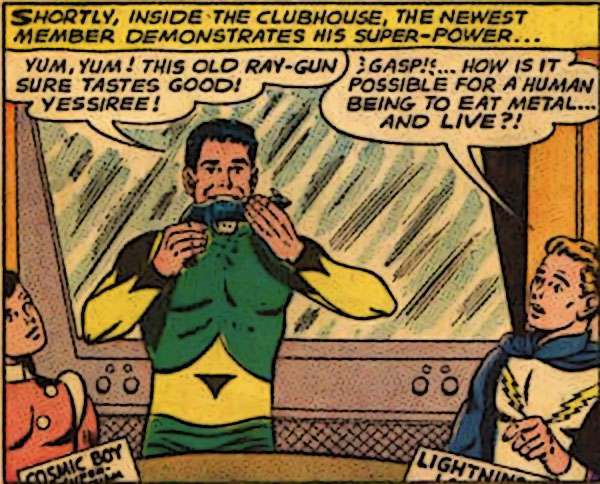 Okay, apparently he can eat metal…. perhaps “Metal Eater Lad” might’ve been a better name, since “Matter Eater” basically describes all life on earth.    Still,  this guy is about as amazing as Anson Williams. How does this happen? Who can we blame for this lamest of all superheroes?

And I hate to get graphic on you folks, but what happens once this stuff is digested? Does Matter Eater Lad shit metallic briquettes? What does this do to the septic system at the Legion? Most toilets can’t handle 3 ply toilet paper – Matter Eater Lad’s rusted mess would be unmanageable.

But enough of this grisly business – where does this ridiculous superhero originate?…. 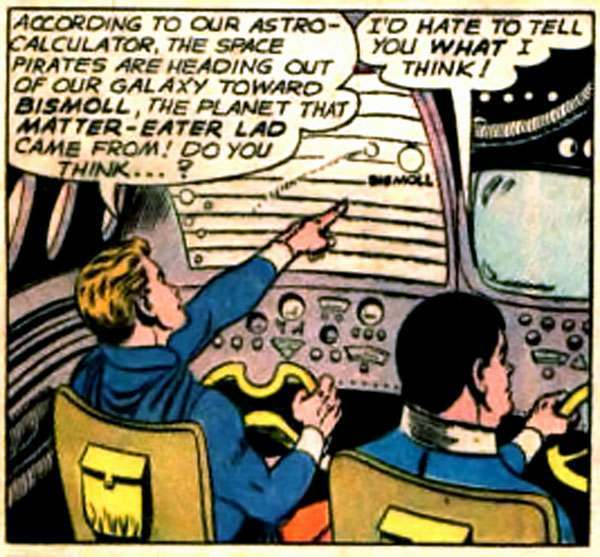 Turns out, Matter Eater Lad is from a planet called Bismoll…. as in Pepto-Bismol the antidiarrheal medication. Is this some kind of joke? 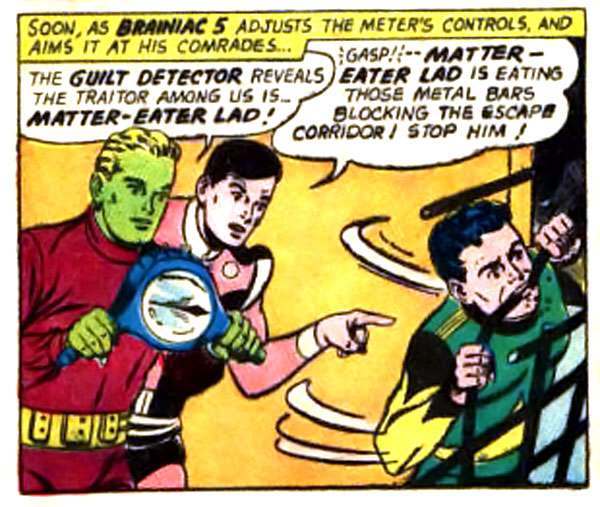 This story in this particular issue revolves around a mysterious spy or mole supposedly within the ranks of the Legion. Naturally, all fingers point to their newest member….. who quickly finds his escape by ridiculously gnawing through the headquarter gates. This would seem to imply that Matter Eater Lad has super speed as well – how else can you explain him chewing faster than Brainiac and Cosmic Boy can run?

I’m so confused, but it’s so awful, I don’t care enough to figure it out. 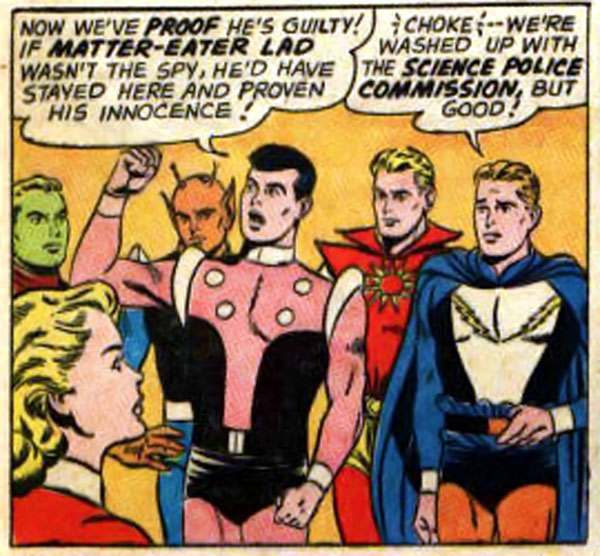 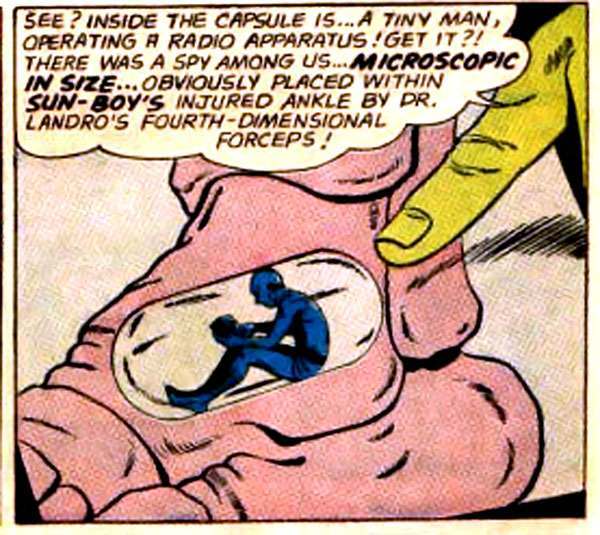 Oh, wait a minute. Turns out, it wasn’t Matter Eater Lad after all. They were bugged – but not by tiny microphones. They were bugged by a tiny man inserted into Sun Boy’s ankle! Of course! We should have known!…….Wait…. WHAT IN THE EVER LOVIN’ F**K?!?!? 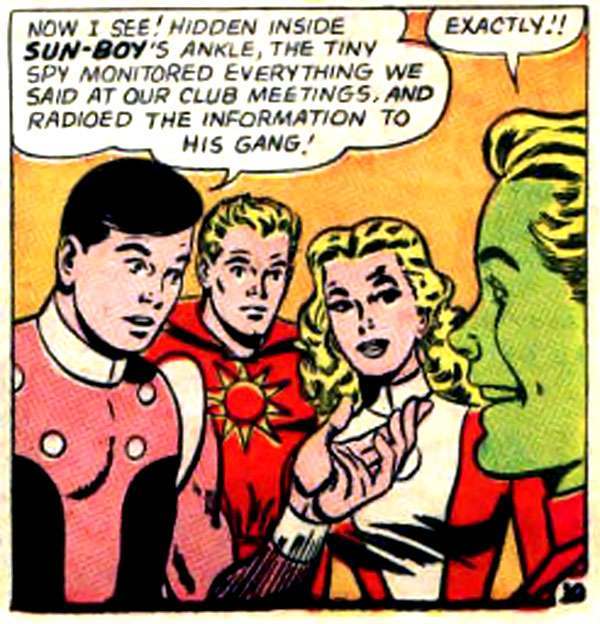 This is insanity. First a superhero with super chewing skills, now a miniature person in Sun Boy’s ankle? Words can’t describe how awful this is.

I’m sure there are tubby fanboys out there wearing their Thundercats T-shirts who pretend to love all Silver Age comics; but, if you’re honest with yourself, you’ll have to admit this is about as awful as a comic book gets.  If you’ve read a worse comic or know of a worse superhero, I’d love to hear it.  And, yes, I’m familiar with Arm Fall-Off Boy and Plaid Lad. 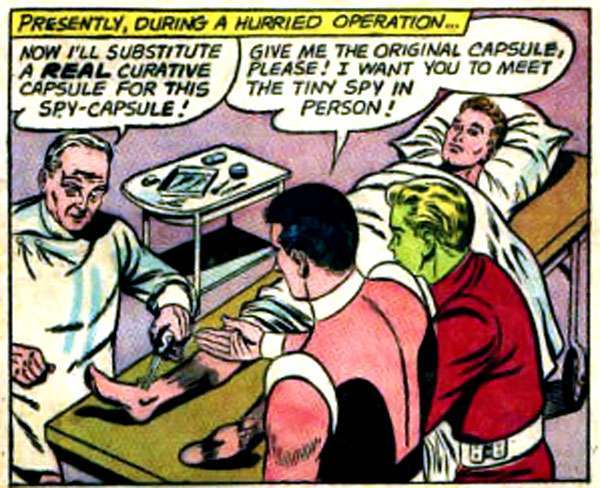