“When and if they legalize it, I’ll sell my brownie recipe to Betty Crocker or Duncan Hines and take the profits and buy an old Victorian for my kids with AIDS.”
– Mary Jane Rathbun 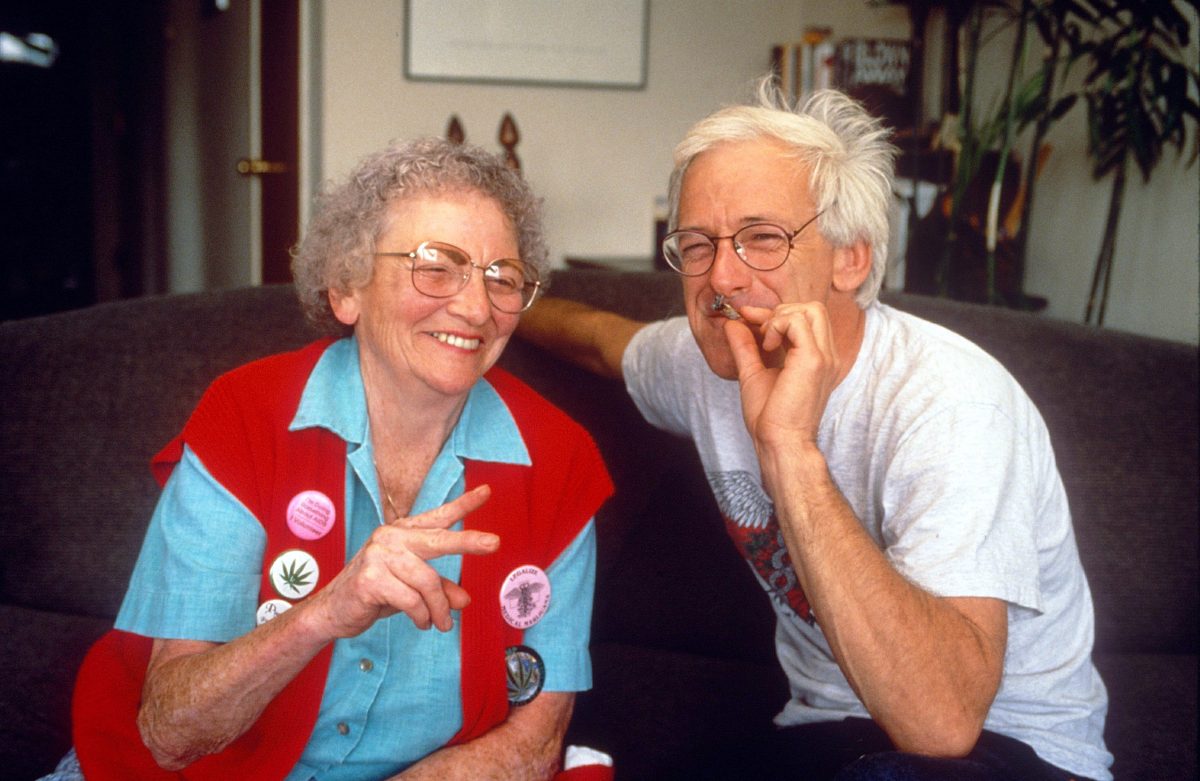 Mary Jane Rathbun  (December 22, 1922 – April 10, 1999) claimed to have invented the Marijuana Brownie. She started mixing marijuana into cakes in the 1950s. In the early 1980s, Mary Jane (yes – it was her real name) was cooking over 4,000 brownies a week for AIDS patients at the San Francisco General Hospital. Despite multiple arrests, she remained an active advocate for the medicinal properties of marijuana until the day she died.

An insight into her indomitable character can be glimpsed in this vignette from August 25, 1992. The Sonoma County district attorney tried to charge the then 69-year-old with two marijuana possession felonies. Her response was concise: “If the narcs think I’m gonna stop baking brownies for my kids with AIDS, they can go fuck themselves in Macy’s window.” 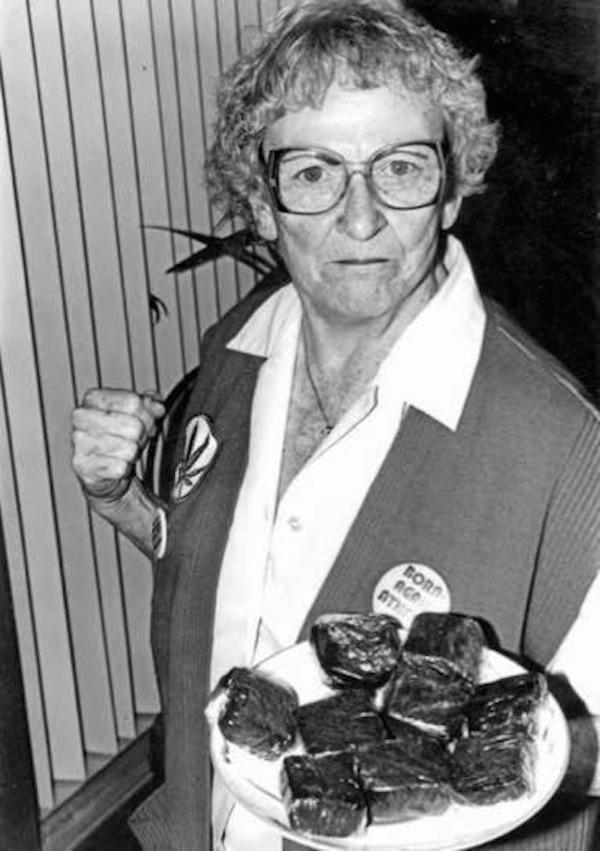 Three years before her death, Mary co-authored a cookbook with fellow activist Dennis Peron (April 8, 1945 – January 27, 2018), Brownie Mary’s Marijuana Cookbook and Dennis Peron’s Recipe for Social Change. The cookbook featured recipes for black bean soup, chip dip, spaghetti sauce and chestnut stuffing. Her famous brownie recipe was not included. Why not? “When and if they legalize it, I’ll sell my brownie recipe to Betty Crocker or Duncan Hines,” she said, “and take the profits and buy an old Victorian for my kids with AIDS.” 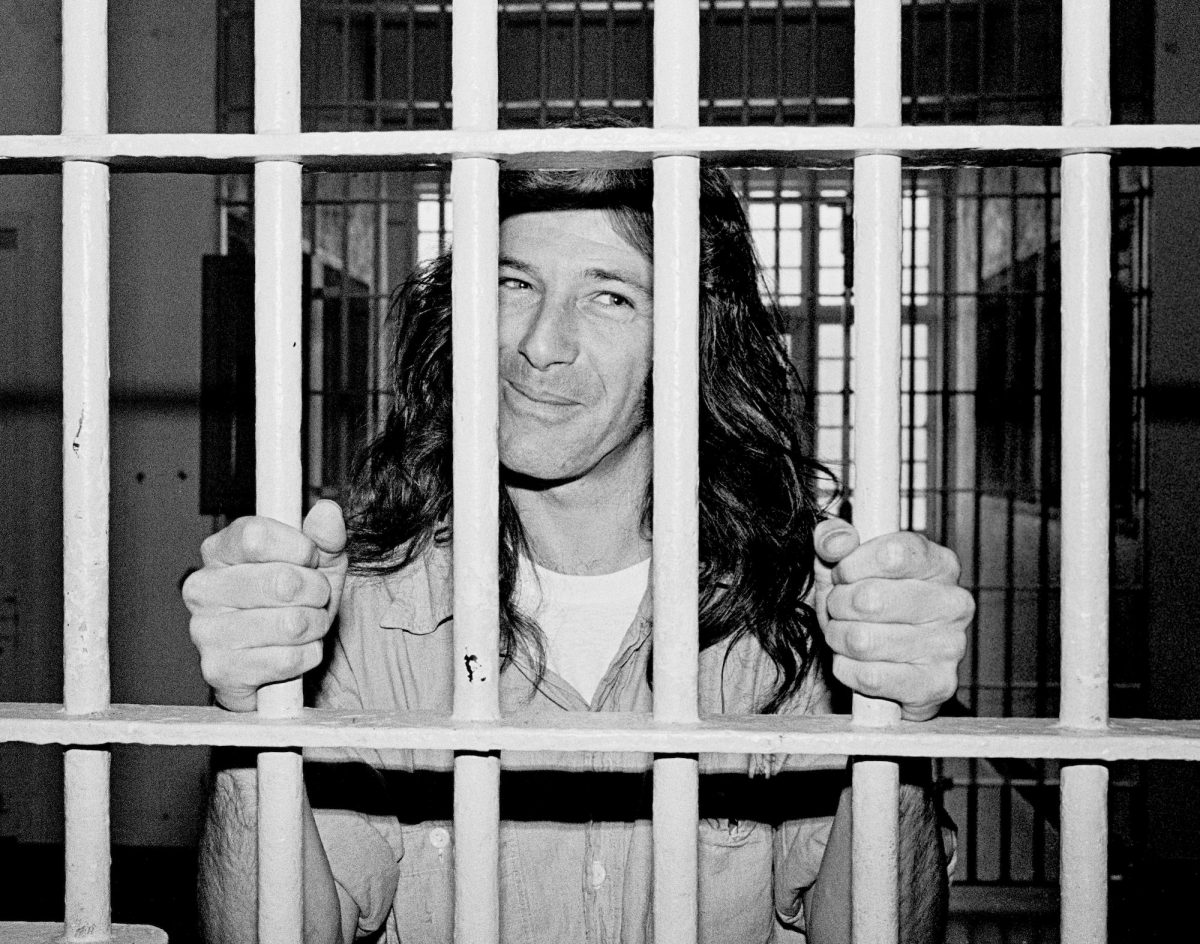 Dennis Robert Peron in jail in the late 70s

Mary and Dennis also founded the San Francisco Cannabis Buyers Club, America’s first weed dispensary. At its height, the club counted 11,000 members. It aimed to supply marijuana to people with AIDS, cancer and other life-altering conditions that a doctor has certified would be helped by the drug.

“I know from smoking pot for over 30 years that this is a medicine that works,” Rathbun told the Associated Press in 1992. “It works for the wasting syndrome. The kids have no appetite, but when they eat a brownie, they get out of bed and make themselves some food, And for chemotherapy, they eat half a brownie before a session, and when they get out they eat the other half. It eases the pain. That’s what I’m here to do.” 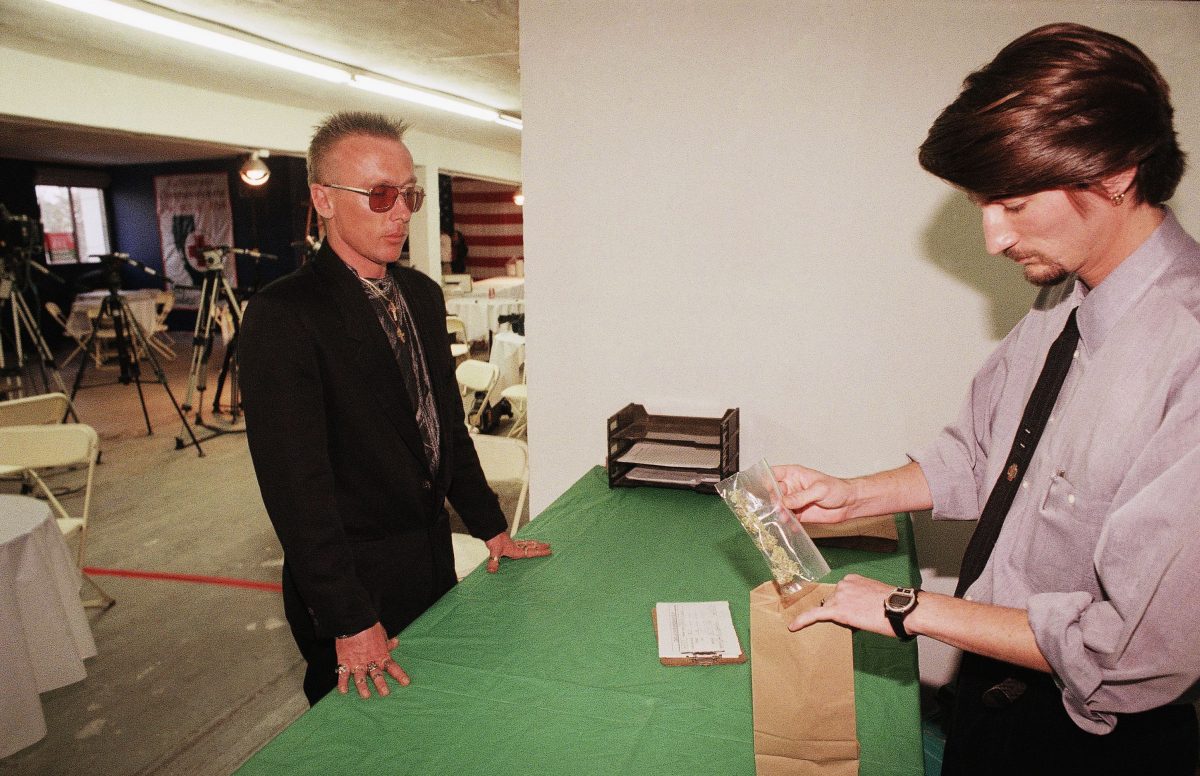 Patrick Lyman Patrick Lyman, left, who had full blown AIDS, gets his weekly allotment of medical marijuana from Sean Howell, a staff member of the Cannabis Buyers Club in the Hollywood section of Los Angeles. One of the propositions voters in California will decide on is whether to legalize marijuana for medical purposes – November 5 1996

The ‘Florence Nightingale of Media Marijuana’

In an article of the summer of 1996, the New York Times told its readers: “If marijuana is ever legalized and ‘magic brownie’ mixes ever appear on the shelves of America’s supermarkets, there will be one obvious candidate to become the Betty Crocker, the Mrs. Field, the Sara Lee, of cannabis baking. Her name, as almost any San Franciscan can tell you, is Brownie Mary. Her real name is Mary Rathbun. But her famous brownies, her great kindness to AIDS patients and her repeated arrests have made her such a public figure here that no last names were needed when, for example, the city officially declared Aug. 25, 1992, to be Brownie Mary Day.”

Mary Rathbun was a consumer as well an advocate. Every morning she ate half a brownie she’d made from marijuana donated by local growers. The rest she ate in the evening. The drugs alleviated her arthritis and the discomfort of living with two artificial knees.

Outside her home in the city’s Castro neighbourhood, customers (her ‘kids’) waited for their cakes. At one time, Mary was producing more than 600 brownies a day. The demand among AIDS patients for her free brownies grew so great that, reportedly, she took to pulling names from a jar to see who would get the next dozen.

“She was above ground; [her marijuana] was for everyone,” says John Entwistle, Peron’s husband and co-author of Proposition 215, which made California the first state to legalize medical marijuana in 1996. “‘I’m Brownie Mary; buy my brownies.’ The kids loved it.” 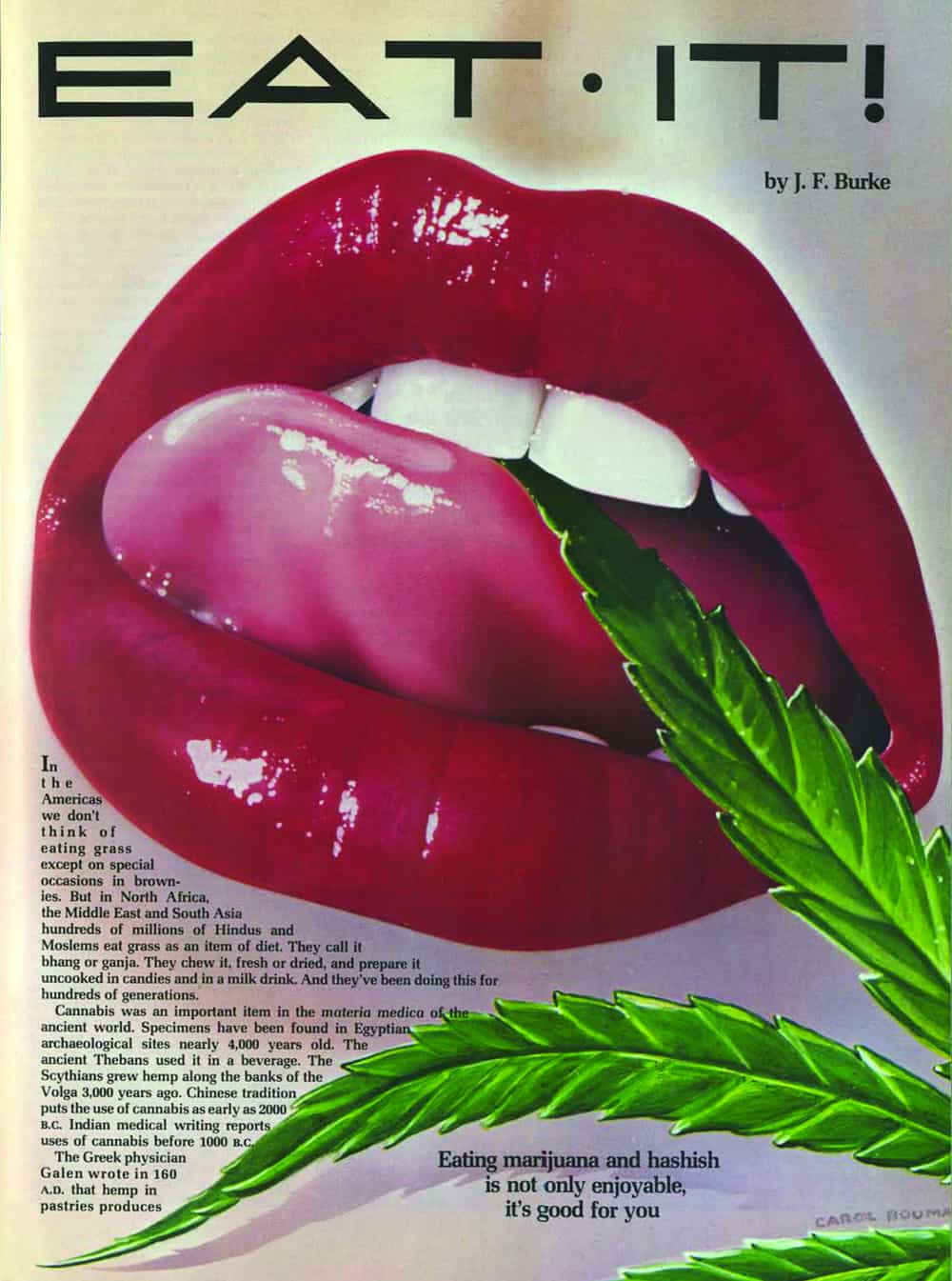 On January 17, 1981, The Guardian reported that Rathbun was wearing a flowered apron when she opened her apartment door to Detective Sergeant Robert Bullard, who was undercover as a customer. Accounts vary as to what Bullard saw in the apartment, but there were surely scores of brownies. ‘Rathbun was famously unfiltered, and her response to being arrested was a resigned, “Oh, shit.”‘ According to The Guardian, the police had come across one of Rathbun’s flyers advertising “magically delicious” brownies, and the squiggles and stars printed on the page were a sure-fire “drug-culture clue to their real nature.”

The police booked Rathbun on charges of possession and sale of illegal drugs. Her punishment was 600 hours of community service. While she’d been selling edibles to make money, her long community service stint made her a fixture on the volunteer scene.

“The judge said, ‘You have to stop the Brownie Mary shtick. It’s over. If you do it again, we’ll send you to jail,'” Entwistle told Madison Margolin in 2019. “Mary was able to do community service in lieu of prison time, and she ended up at the Shanti Project, a nonprofit supporting those in the emerging AIDS crisis. Her early work in the community impacted by AIDS sparked a passion that would drive Mary for the rest of her life.”

“We loved to ask her, ‘What’s the recipe?’ and she always made Betty Crocker jokes,” says Entwistle. “She once explained it to me: When you’re buying boxes of brownies, look at how much oil the recipe calls for, and go for the one that uses the most oil. But the mystery – the recipe for her brownies – goes to her grave.”