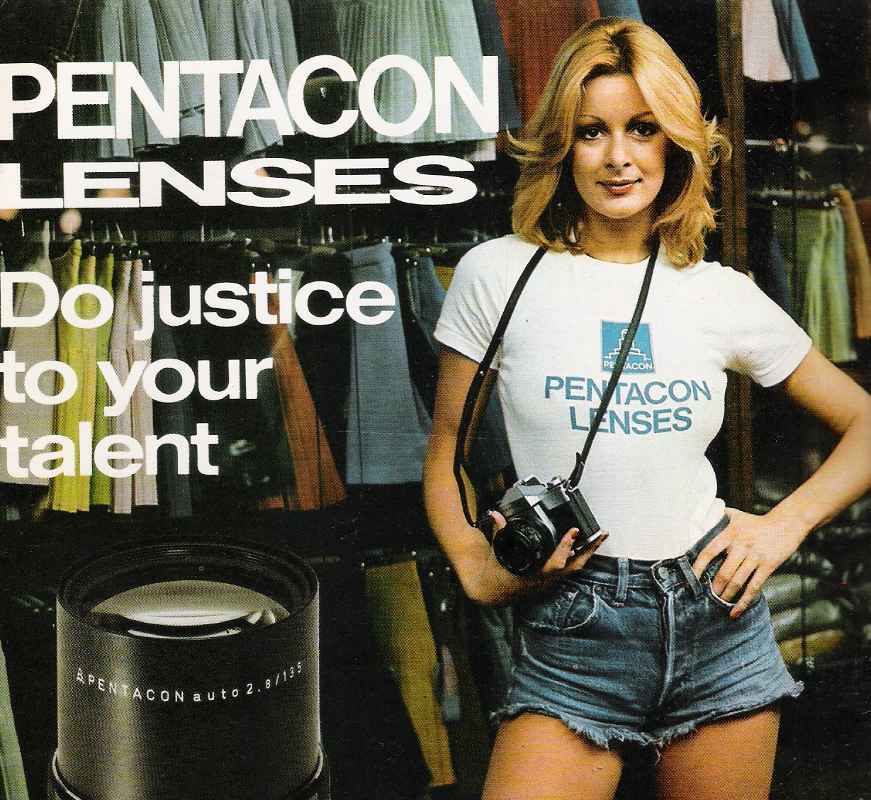 Somewhere back in the Mesozoic Era, mankind used something called “film” in their cameras.  It was a time when, if someone said “digital”, everyone assumed he or she is talking about “fingers”.  A decent camera was super expensive and largely considered a man’s hobby.  Thus, the advertising from the 1960s-1980s were largely geared toward men…. and we all know what happens when you gear advertising toward men:  lots of pretty ladies and boobs. 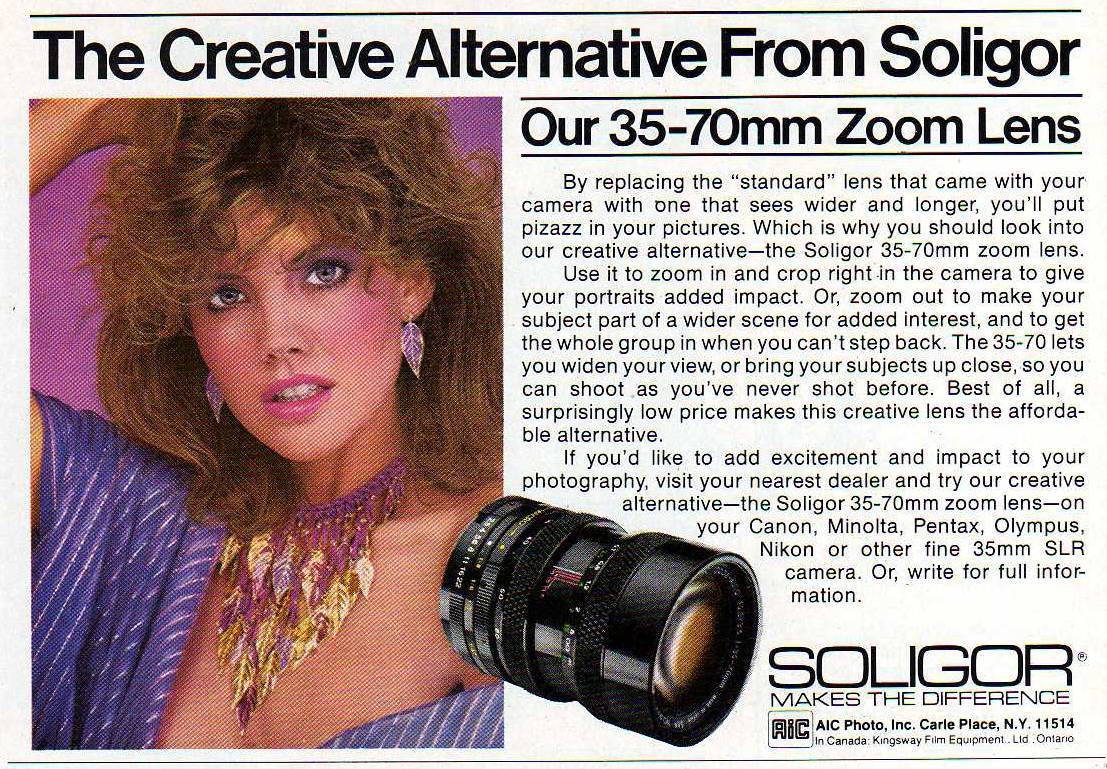 You get the distinct impression that the 1960s-80s camera buyer fashioned himself a Playboy photographer – that, once the camera is purchased, there will be stacks of photos of posing foxes. 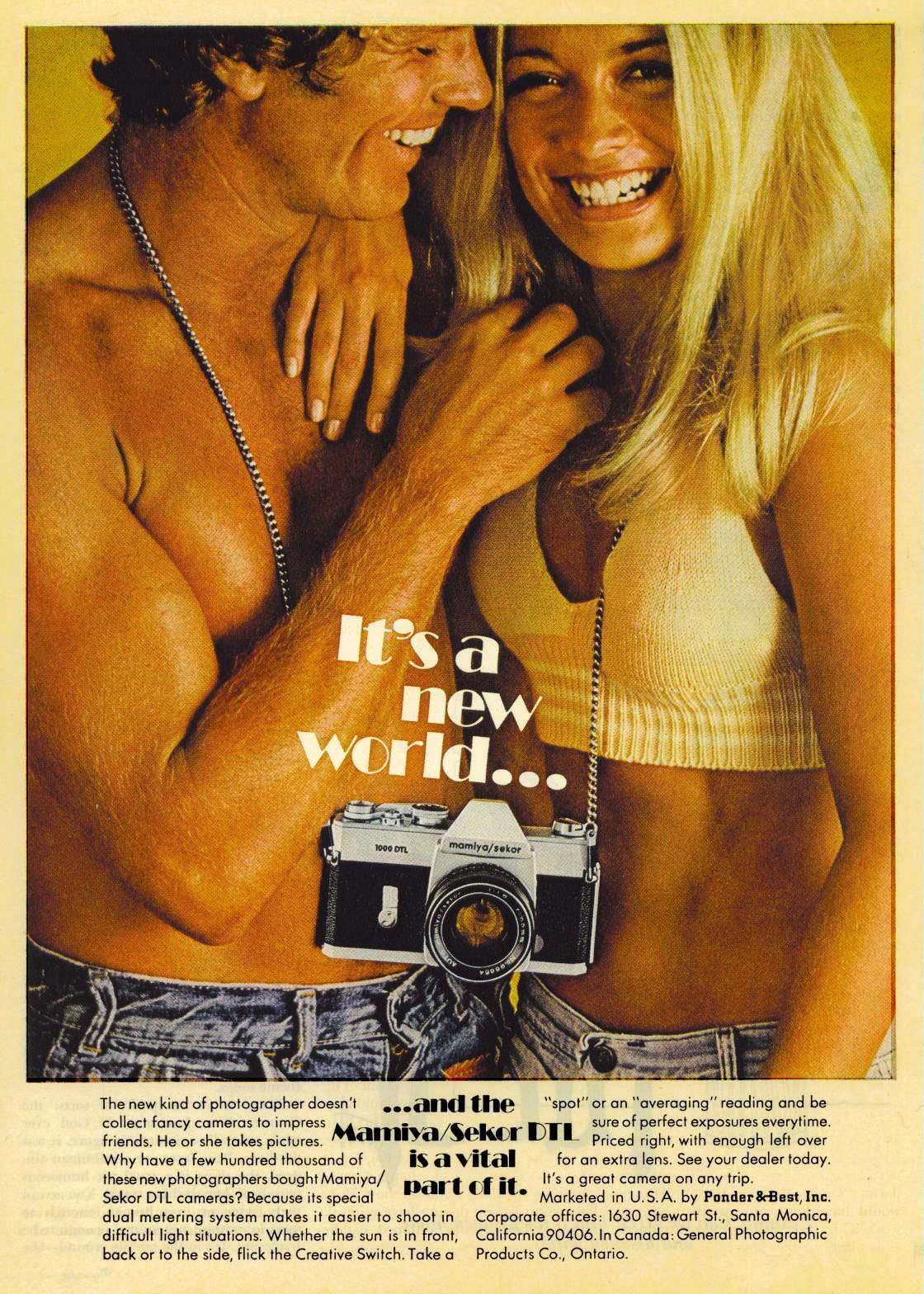 I would have loved to have worked in a Fotomat in the 1970s.  It was the sexual revolution – god only knows how much dirty sex was being developed at these little huts in your shopping center parking lots. 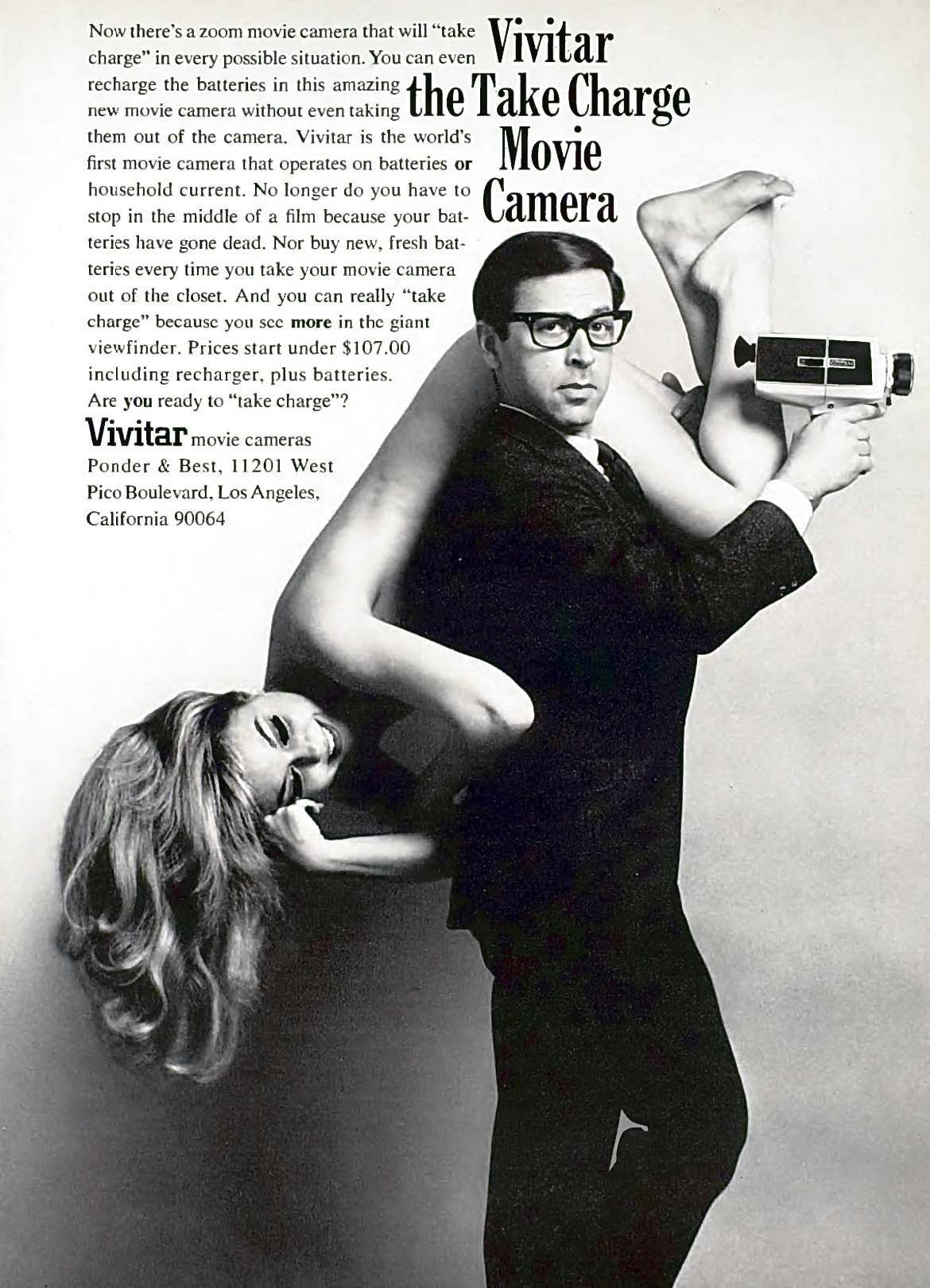 There’s a fine line between “sexy” and “sexist” advertising.  I’d say this Vivitar advert crosses that line… than takes about a thousand steps further. 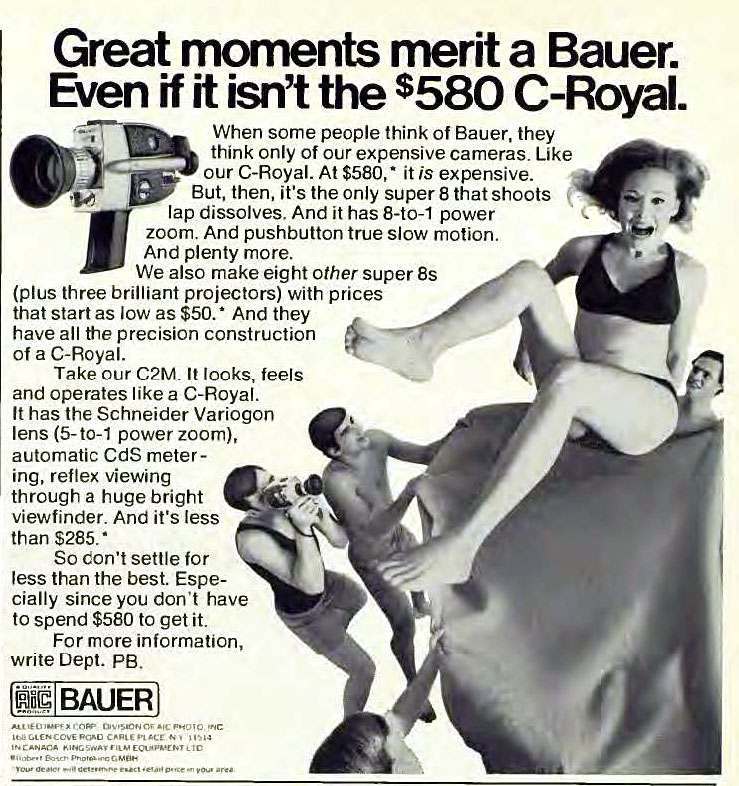 Is it just me, or does this woman look genuinely frightened?  And well she should – there’s a group of creepy men encircling her and filming her.  This will not end well. 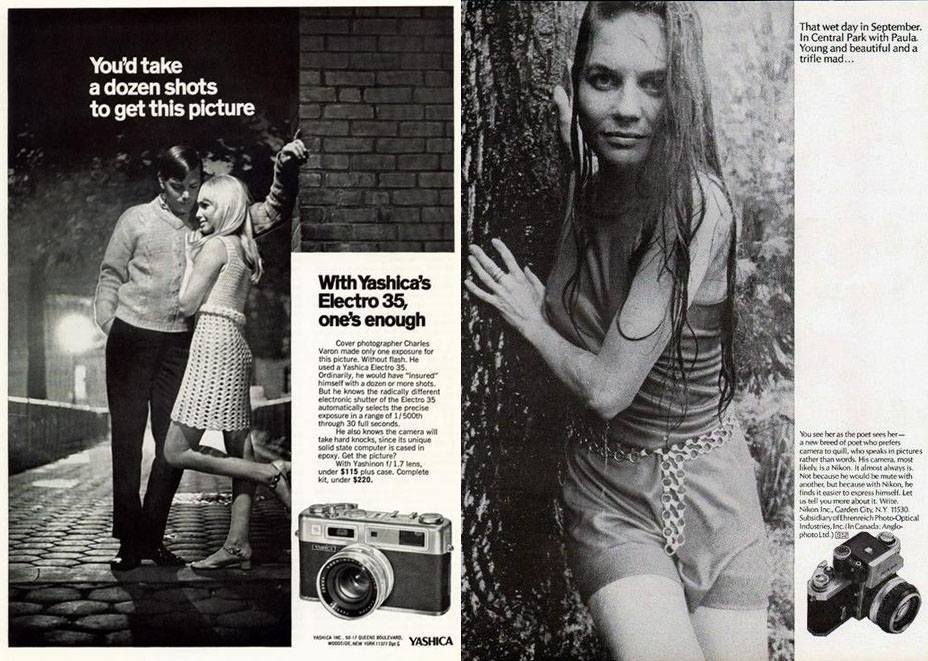 “That wet day in September in Central Park with Paula.  Young and beautiful and a trifle mad… You see her as the poet sees her – a new breed of poet who prefers camera to quill, who speaks in pictures rather than words.” 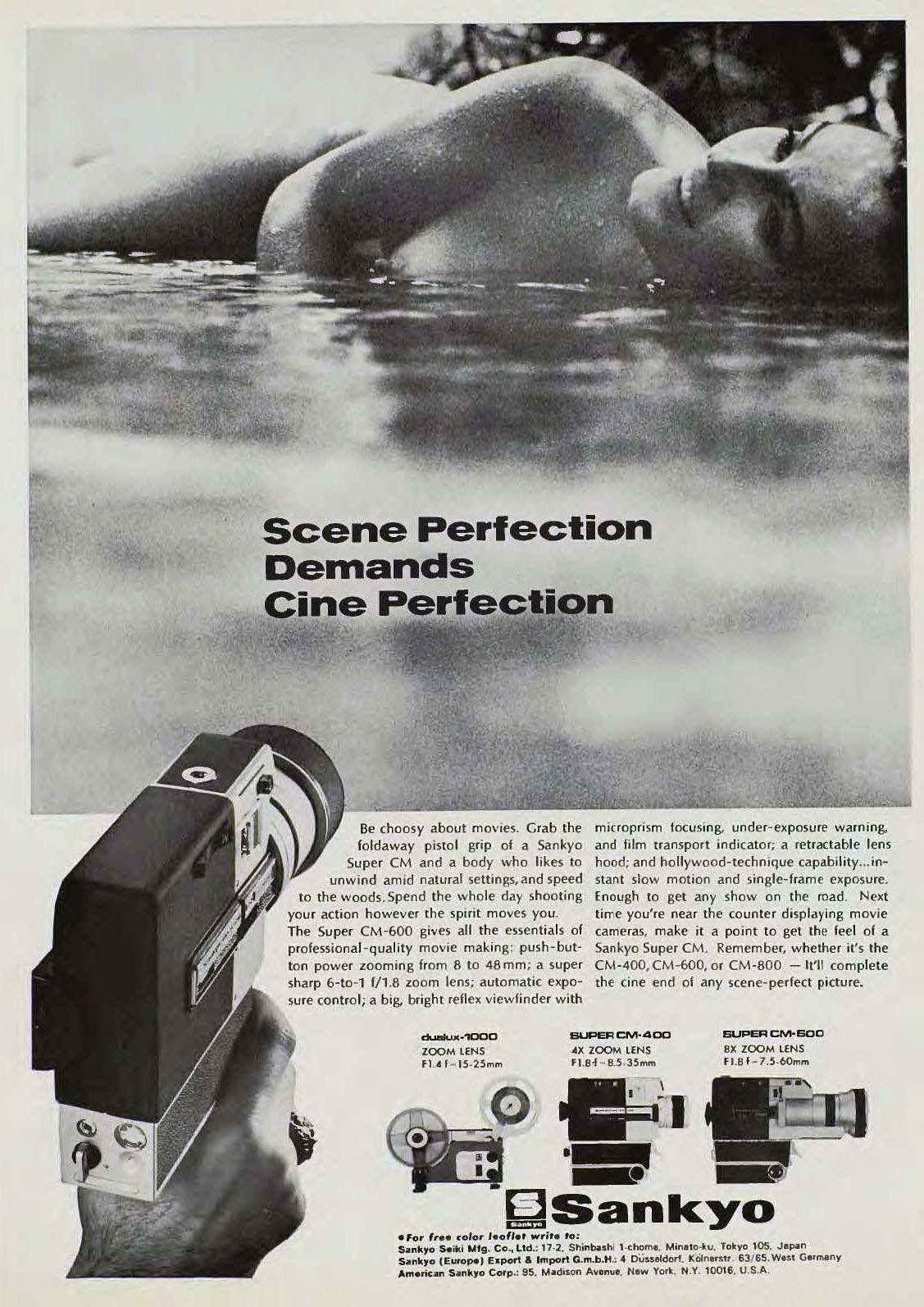 Heaven forbid Sankyo demonstrate that it can make home-movies of the family.  It’s 1970 – the Boomer’s, for the most part, haven’t had kids and are still “exploring” and “discovering themselves”……  This exploring and discovering involved an awful lot of [censored]. 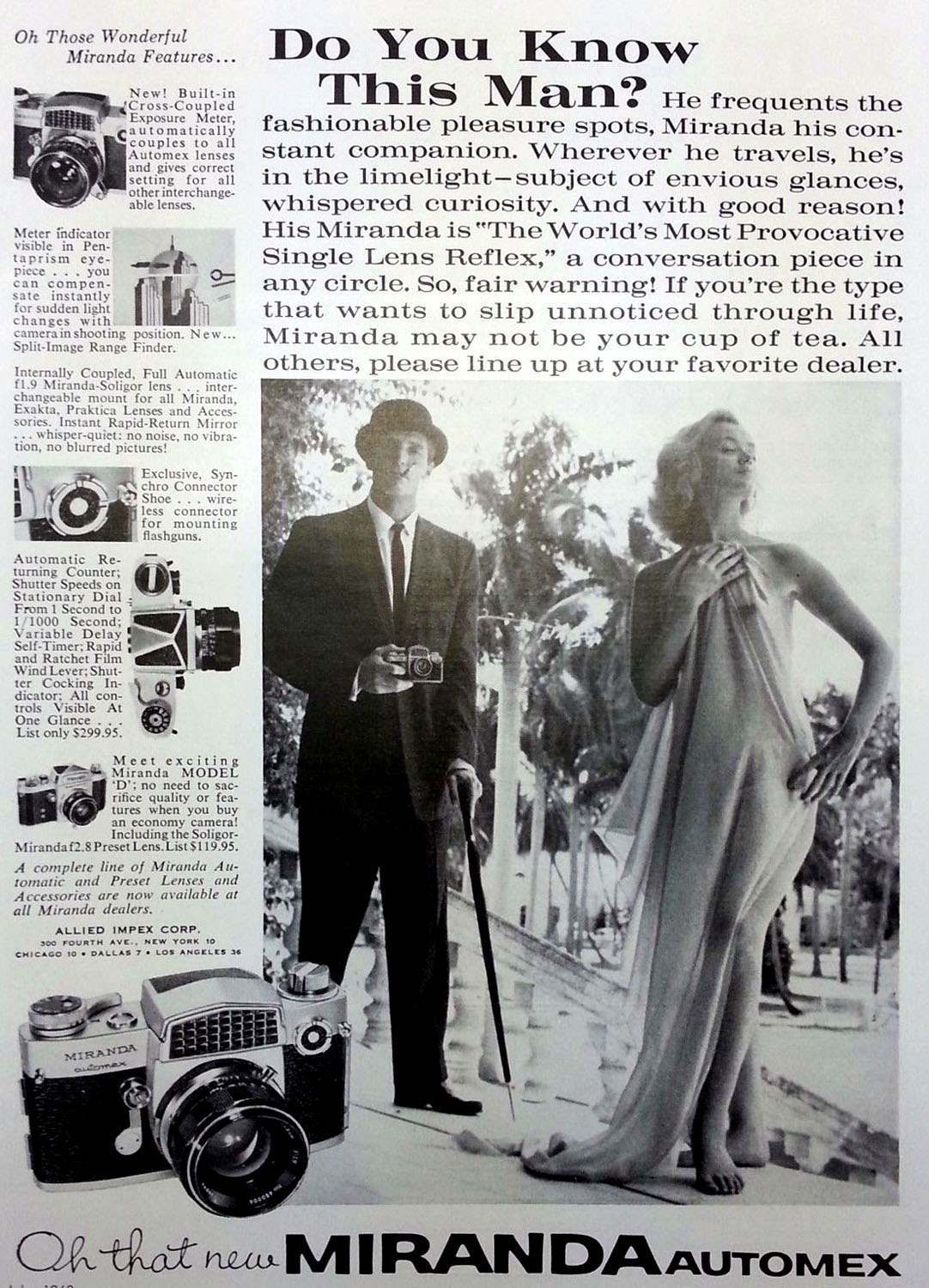 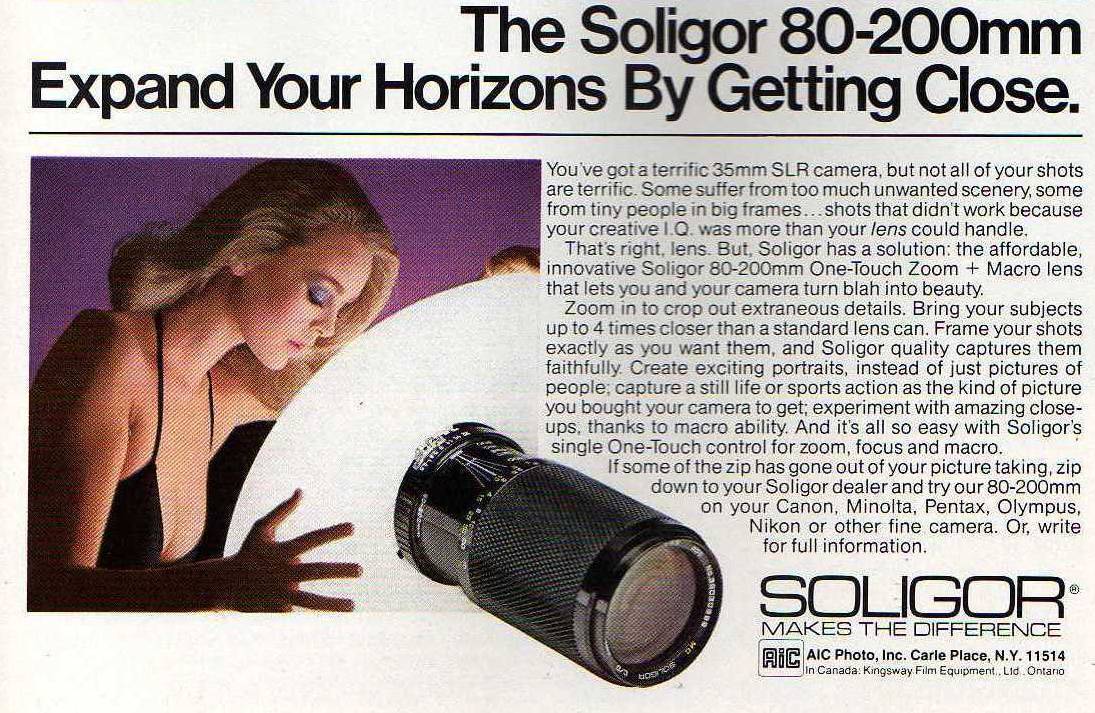 Why does a camera lens advert feature a woman with cleavage about to make love to a giant glowing orb? Does it really matter? 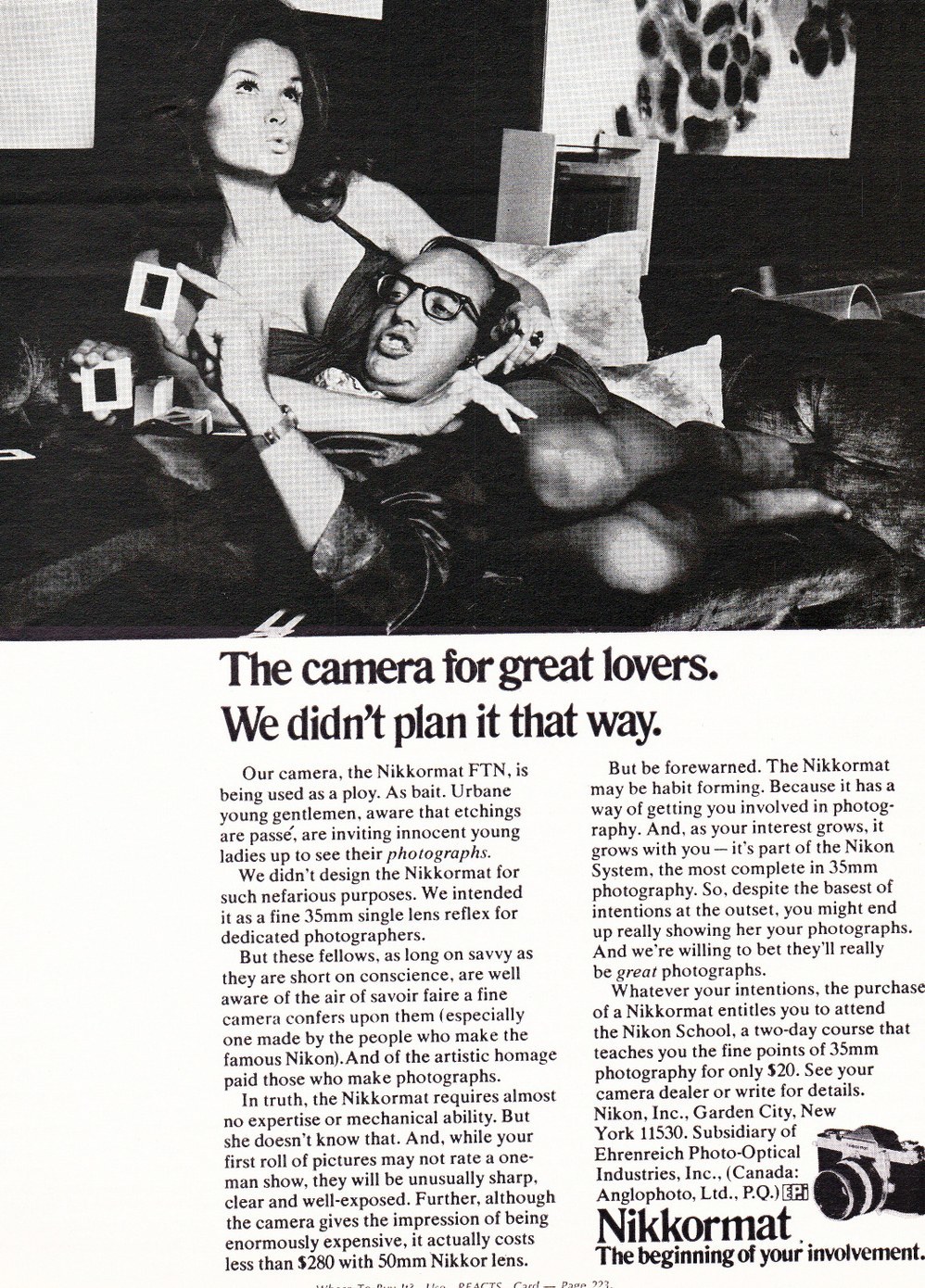 “Our camera, the Nikkormat FTN, is being used as a ploy.  As bait.  Urbane young gentlemen, aware that etchings are passe, are inviting innocent young ladies up to see their photographs…… In truth, the Nikkormat requires almost no expertise or mechanical ability.  But she doesn’t know that.”

Yes, women will just throw themselves at the opportunity to shed their clothes and have their pictures taken.  In all seriousness, this seems to have been the belief among young camera buyers…. and during the sexual revolution, perhaps it wasn’t too naive a hope.

And who exactly are the consumers? Take a look at the camera club below (taken from an old college yearbook)…. 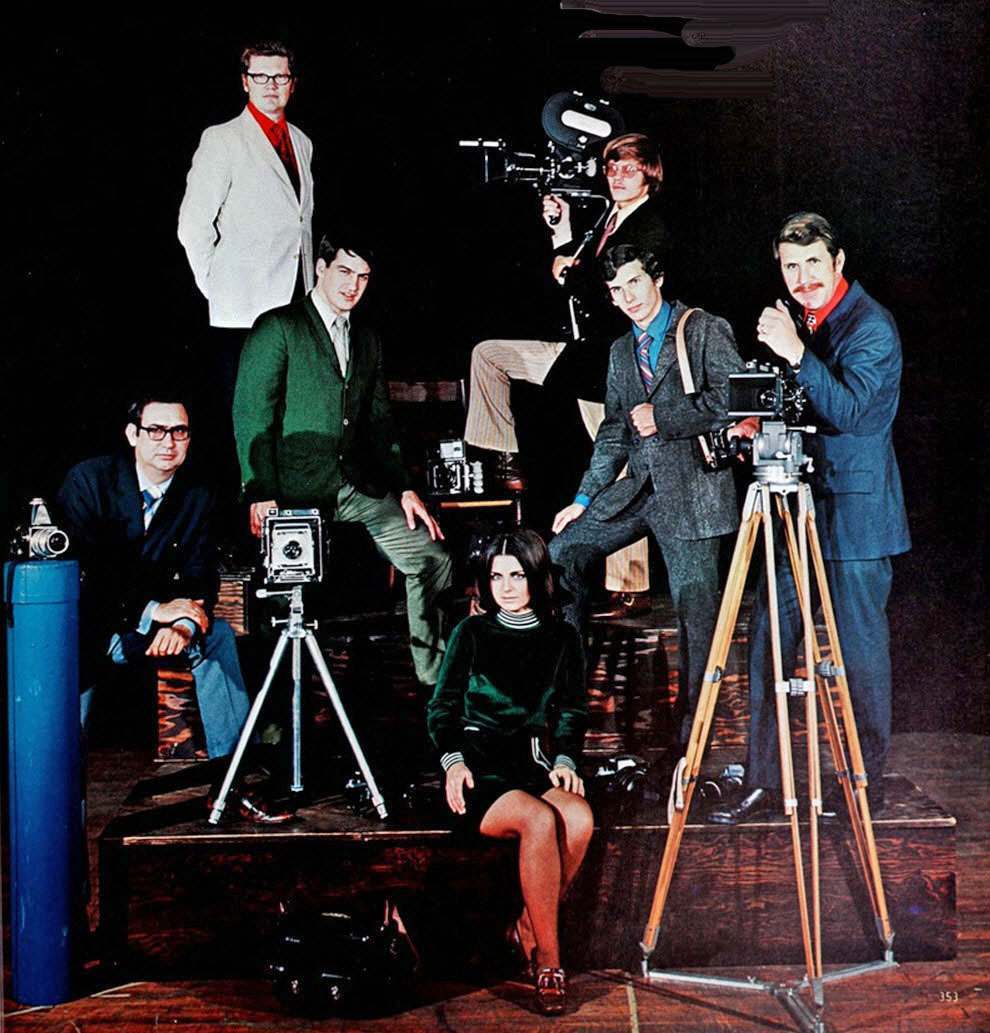 I’m going to hazard a guess that the lone female spent a lot more time in front of the cameras than behind them.  The 1960s-1970s camera aficionado didn’t play around.  After all, these things were insanely expensive…. what could inspire a guy to lay down vast sums of money? 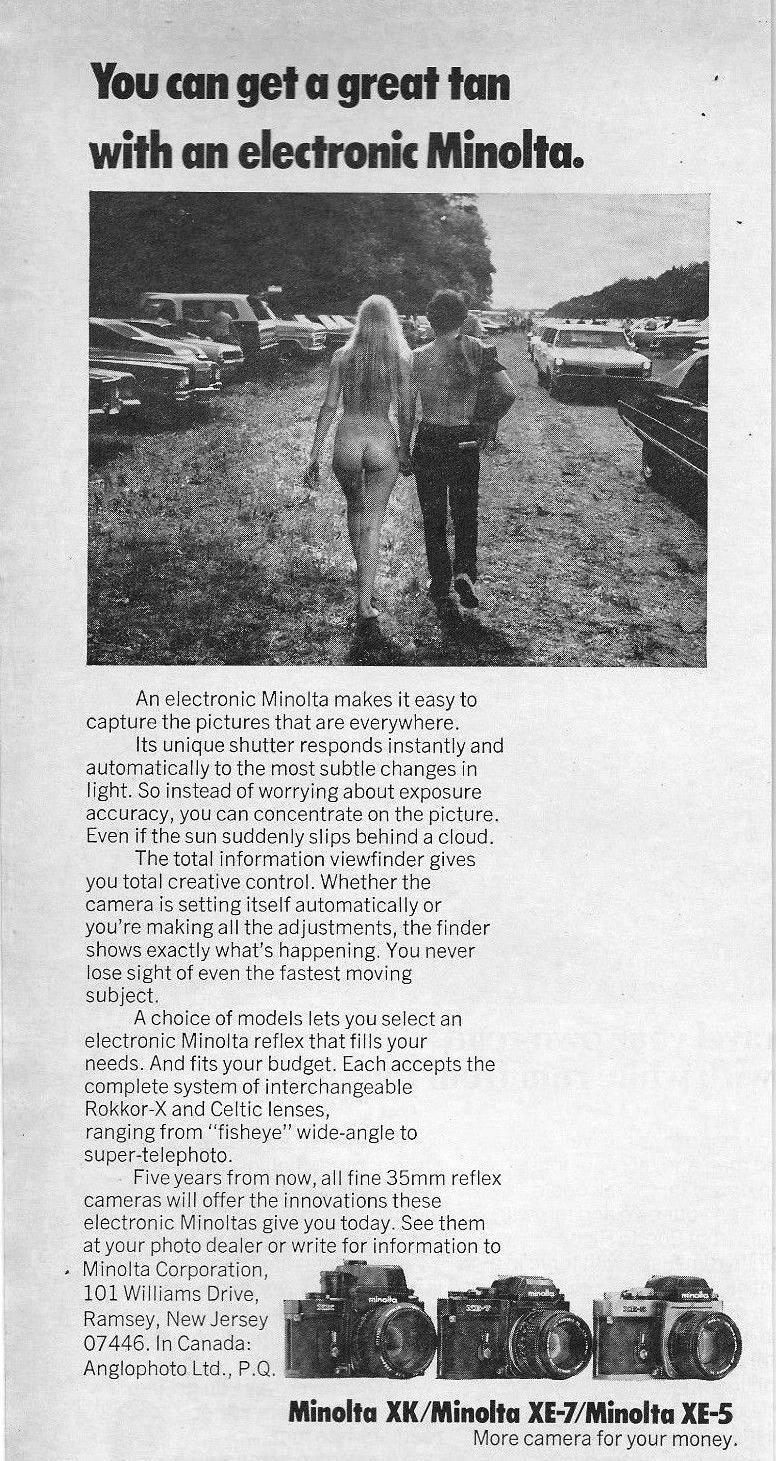 You never know when a completely naked chick is going to walk by, and you’re going to wish you had a camera to preserve the moment…. for you to “enjoy” later. 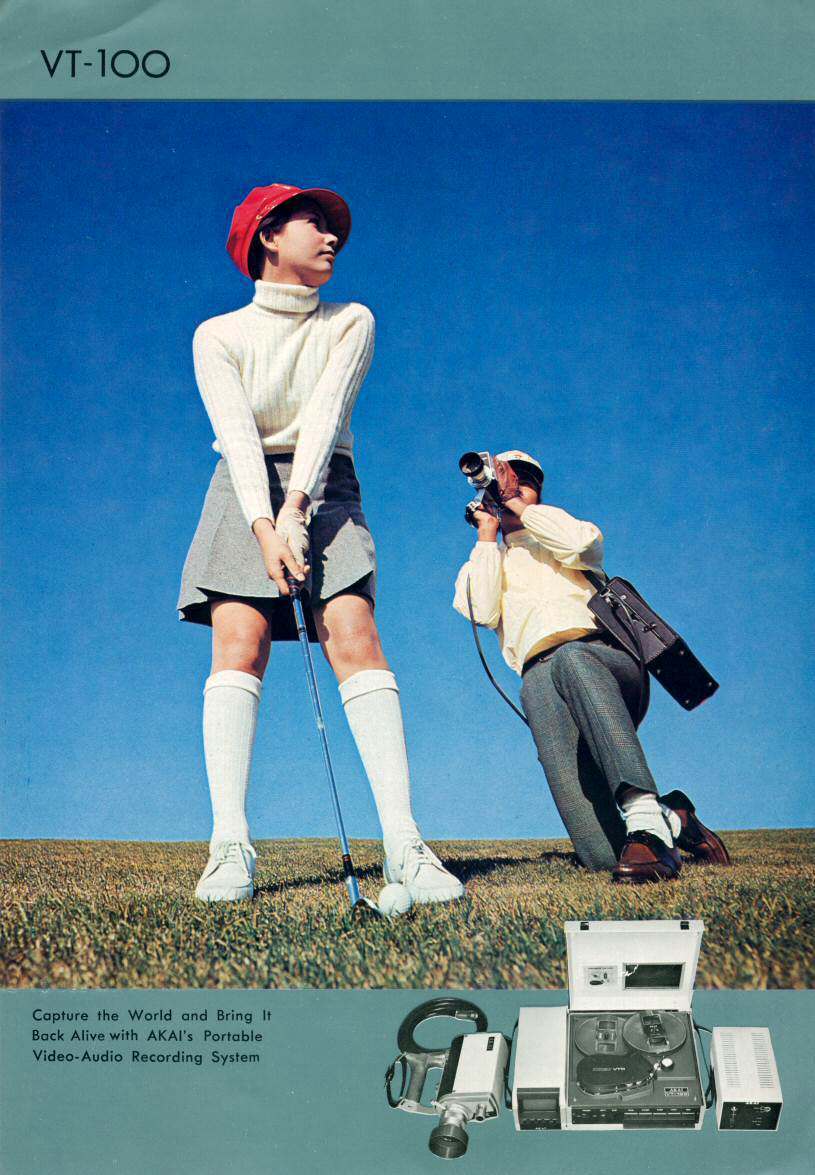 He’s filming from behind, and soon to be panning downward… a nice breeze on that miniskirt might make this videotape a keeper.

It definitely seems these cameras were bought with a single purpose in mind – and it wasn’t to preserve your girlfriend’s golf skills. 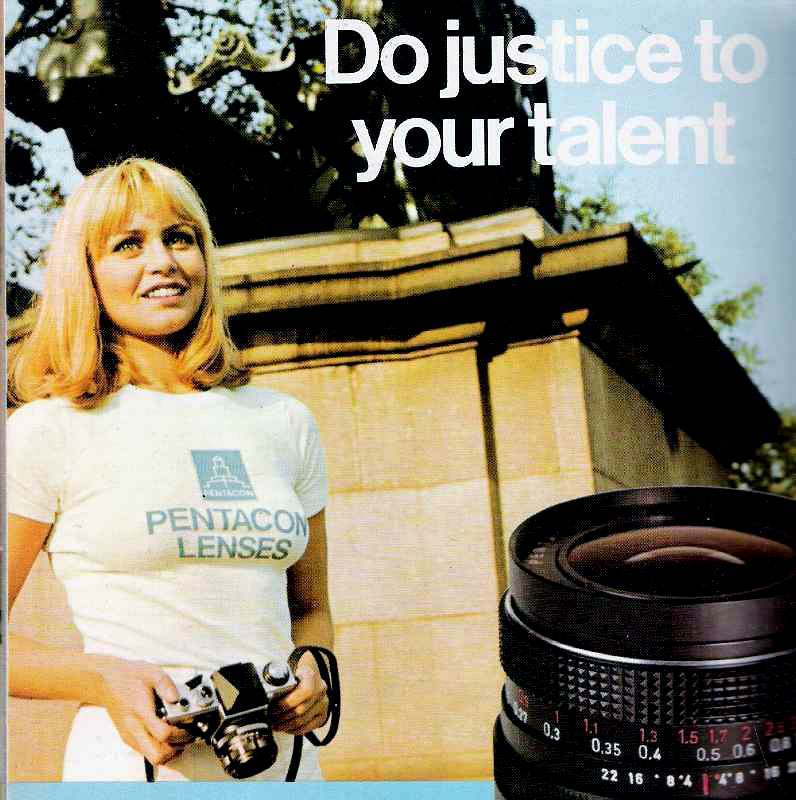 The Pentacon lense adverts are just too perfect for words.  “Do justice to your TALENT” and they show boobs.  There’s something refreshing about the good old fashioned “sex sells” approach.  No irony, no pretension, just selling camera lenses the old fashioned way – with breasts. 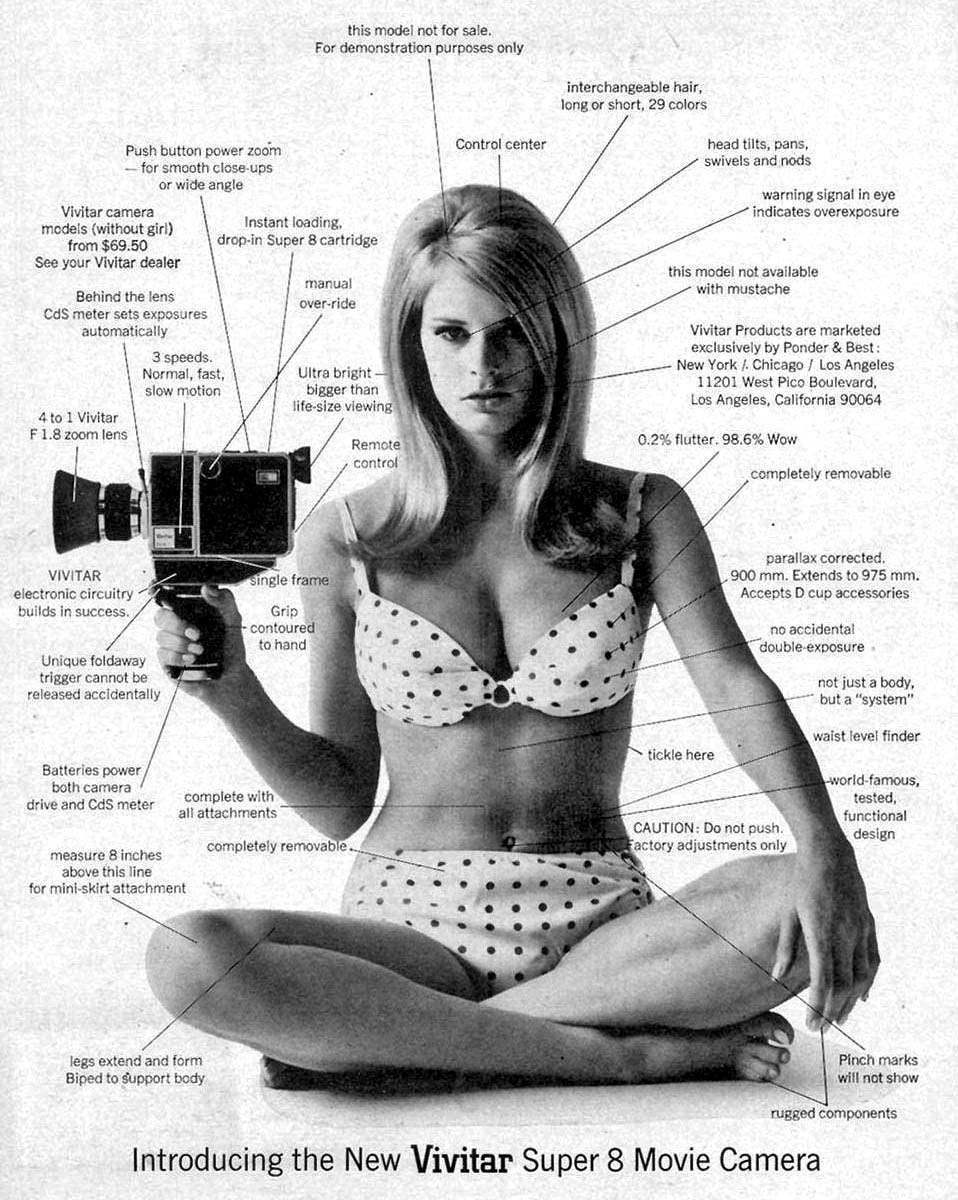 Perhaps the best caption is the line pointing to her bikini bottoms that says “completely removable”.  You’ve got to hand it to Vivitar, they knew who their consumers were and they went all in. 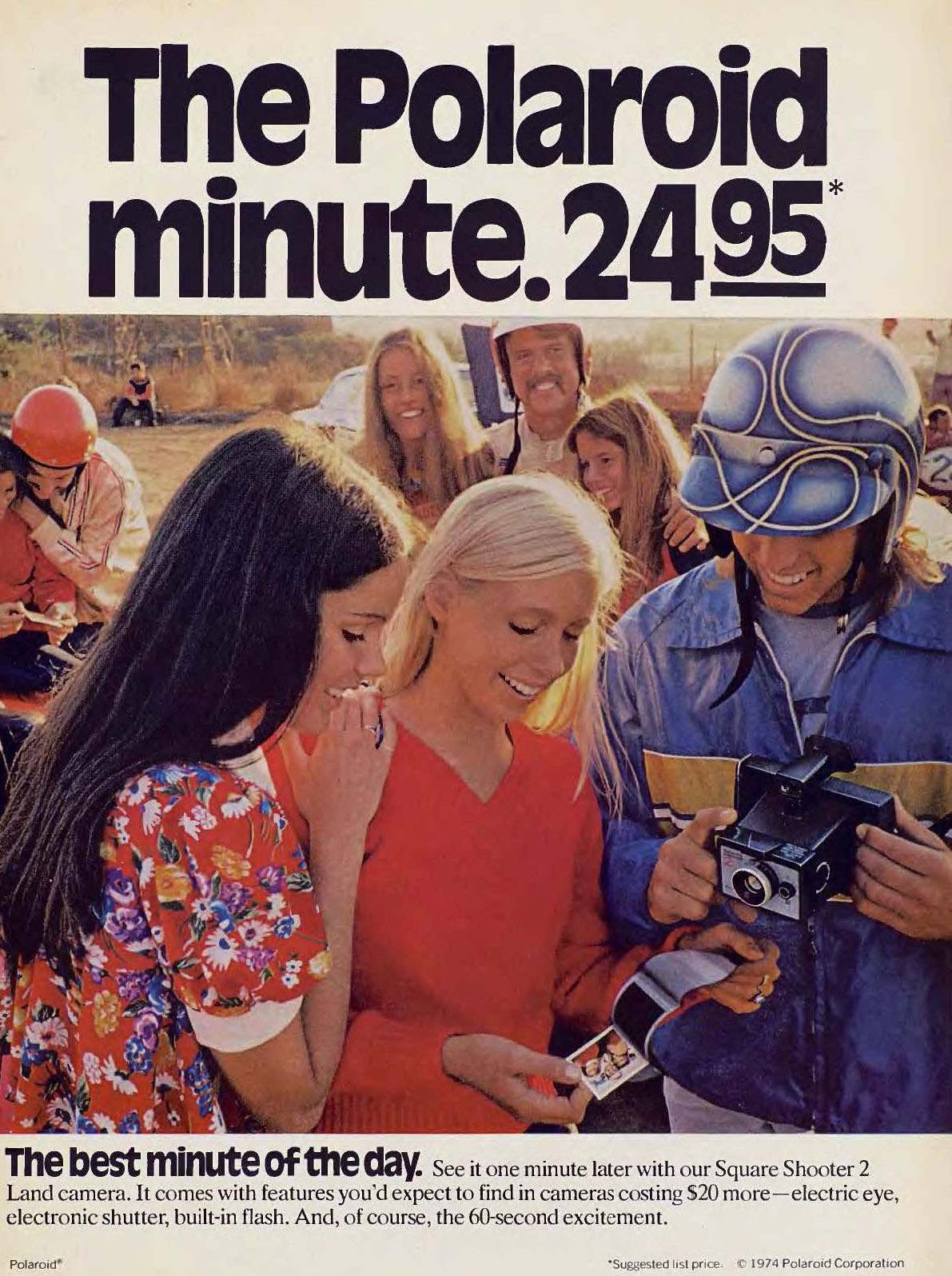 This equates to $118 adjusted for inflation – a steal compared to even the cheapest cameras a few years prior.  Now you can take pictures of chicks and not go broke in the process. 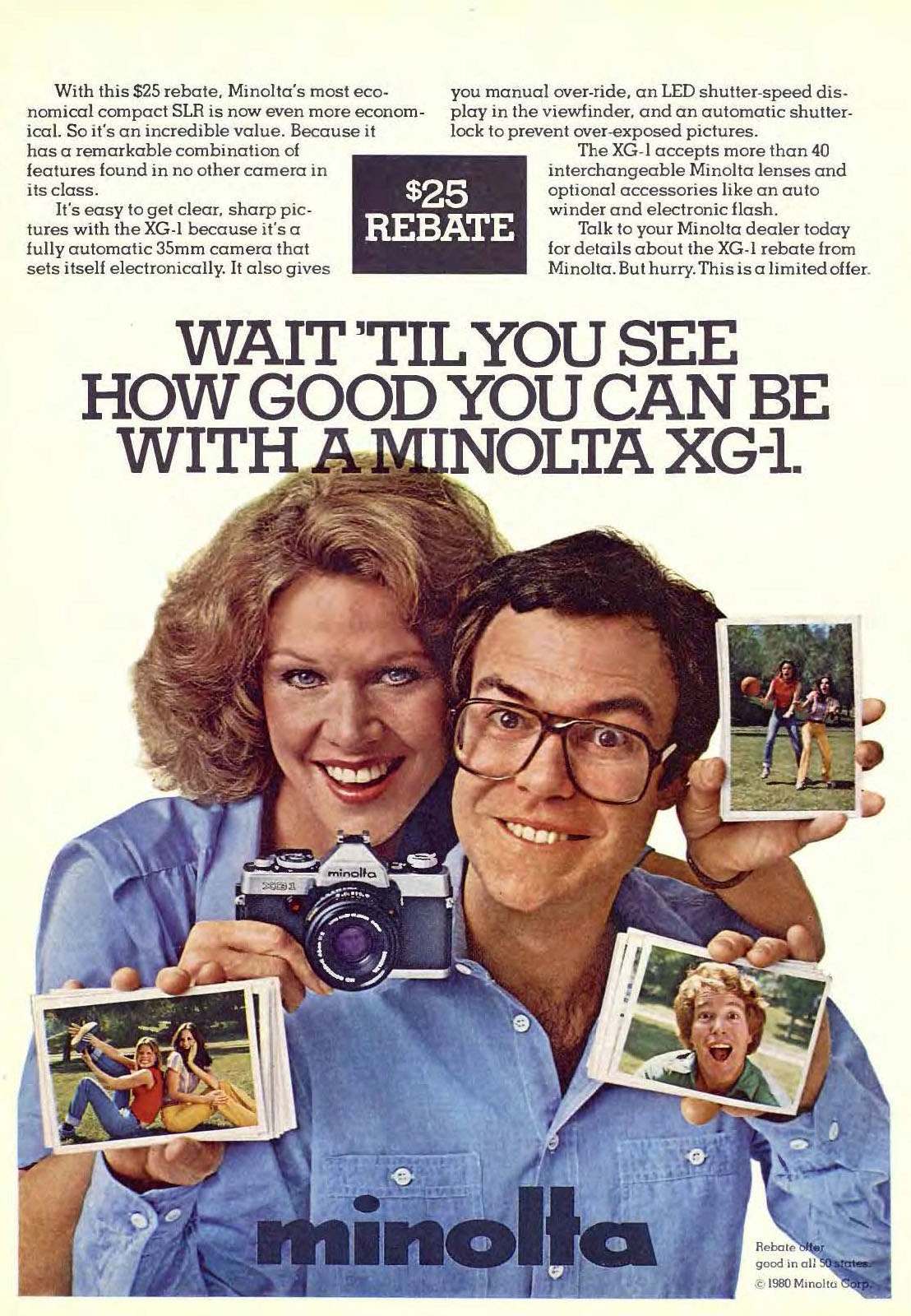 With a Minolta, even a man this pathetic can have a hot woman over his shoulder and take pictures of young babes in the park.

In the end, can you blame these men for throwing money at the promise of memorializing sex?   Think about it: you wouldn’t go to the zoo or to the beach without a camera….. men of the 60s and 70s damn sure weren’t going to go to the Sexual Revolution without one. 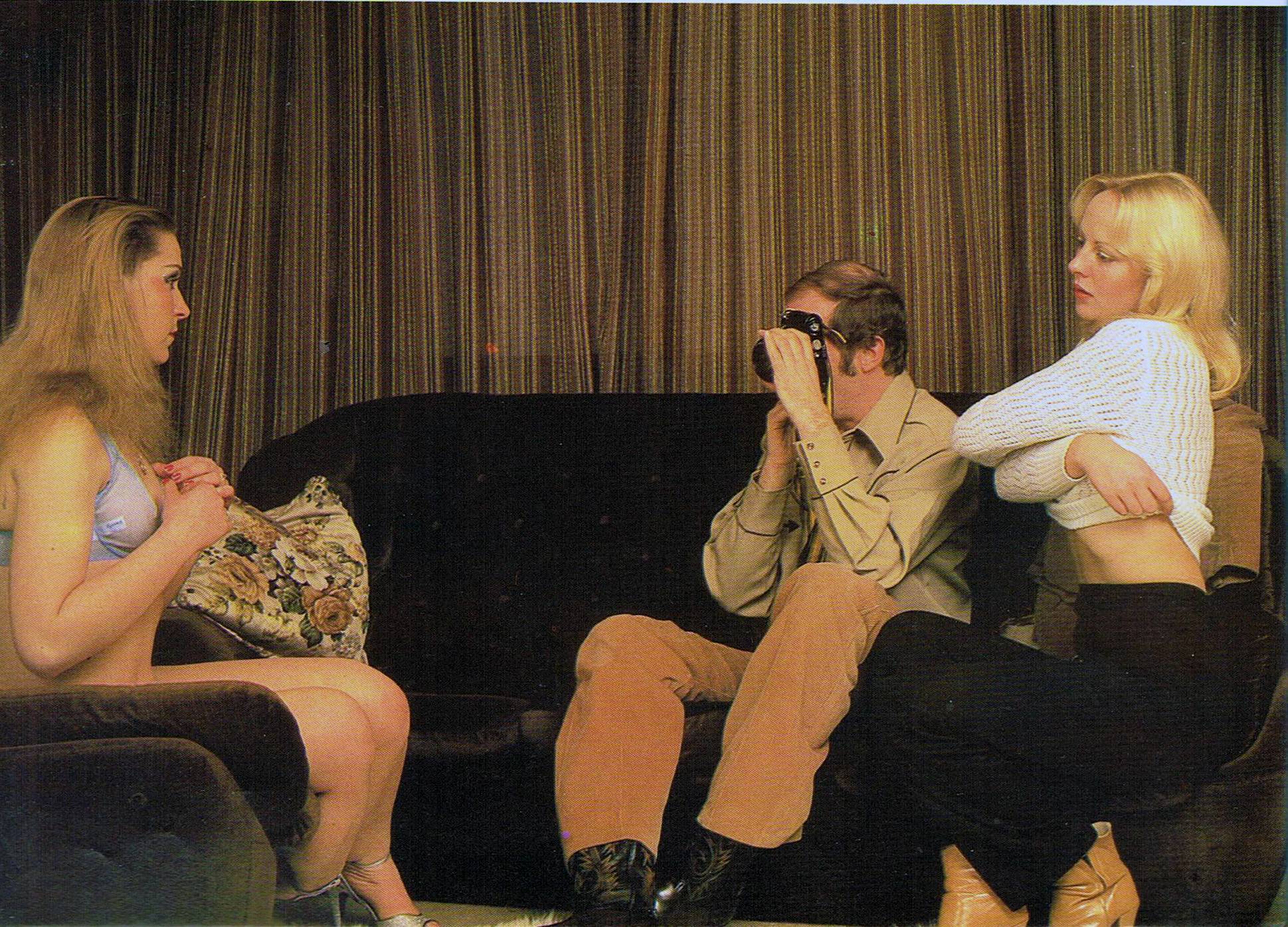