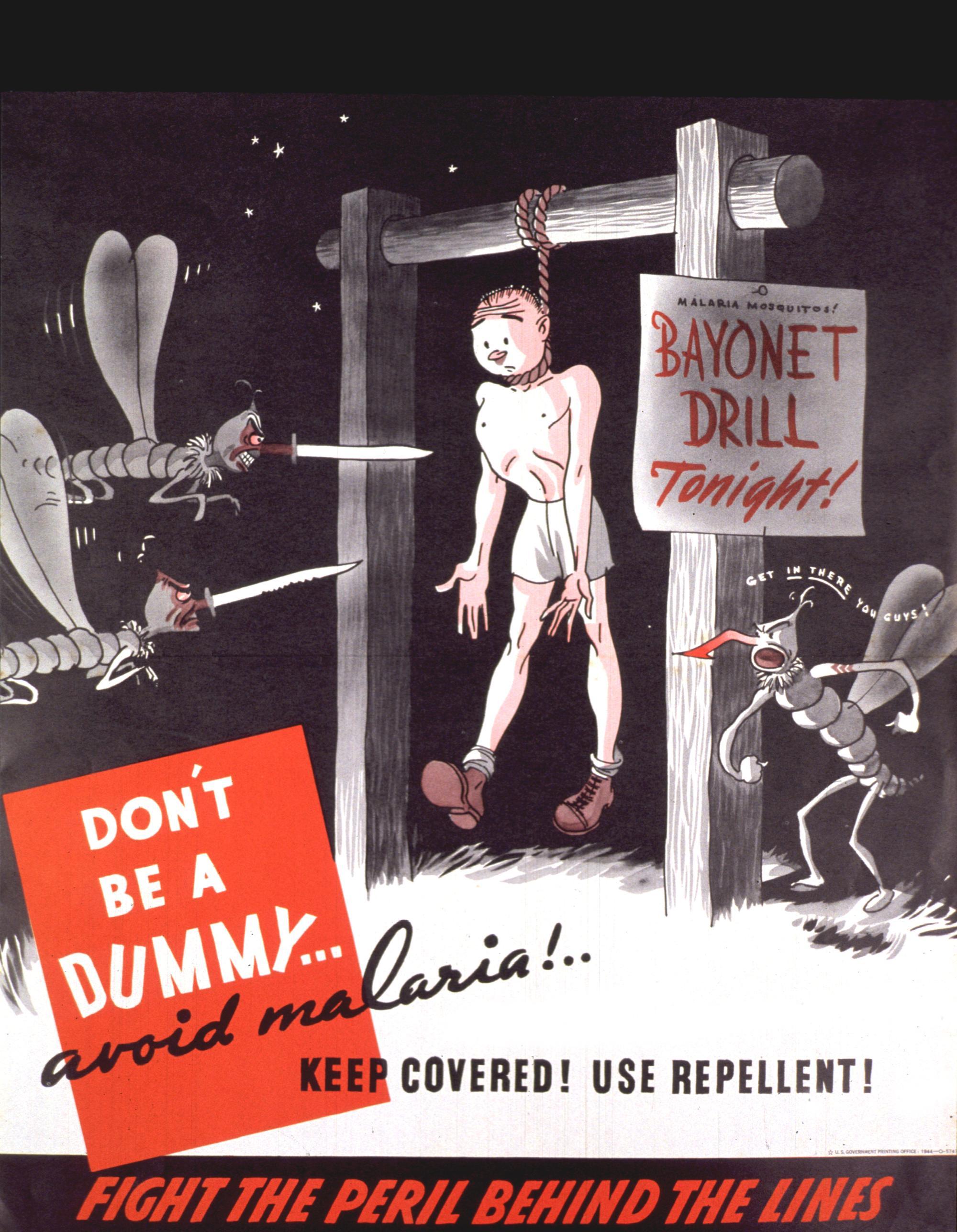 In World War II, the US military issued posters warning the fighting folk about malaria.

The National Center for Biotechnology Information highlight the problem: 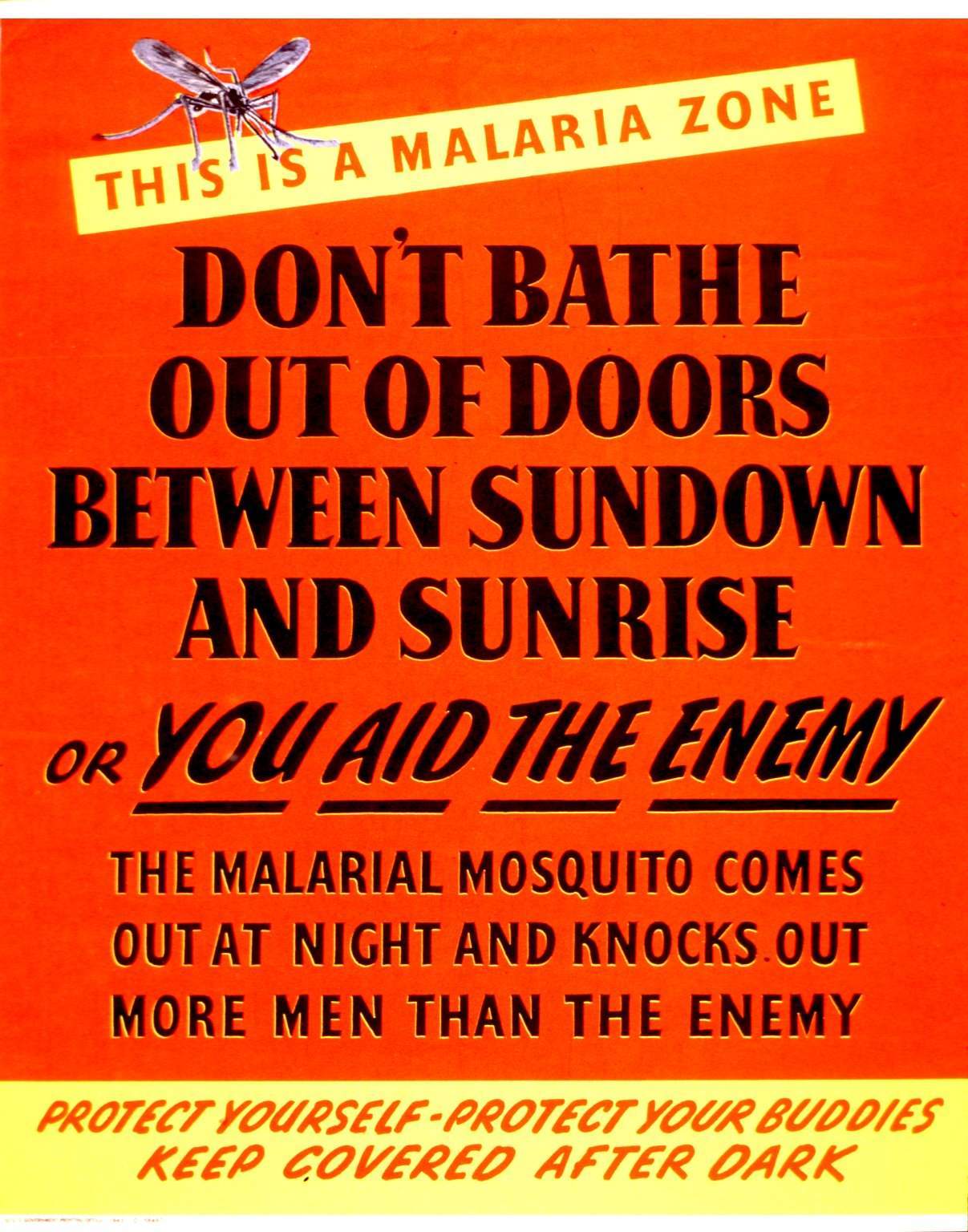 On the other side, the Germans were figuring out how to harness the mosquito’s destructive powers. Dr Klaus Reinhardt of Tuebingen University says Nazis working at the Entomological Institute at the Dachau death camp experimented with malaria. To the Nazis, mosquitoes were a biological weapon. Dr Claus Schilling deliberately infected prisoners with malaria. Dr Reinhardt says the Nazis’ plan was to drop infected mosquitoes over Allied forces. 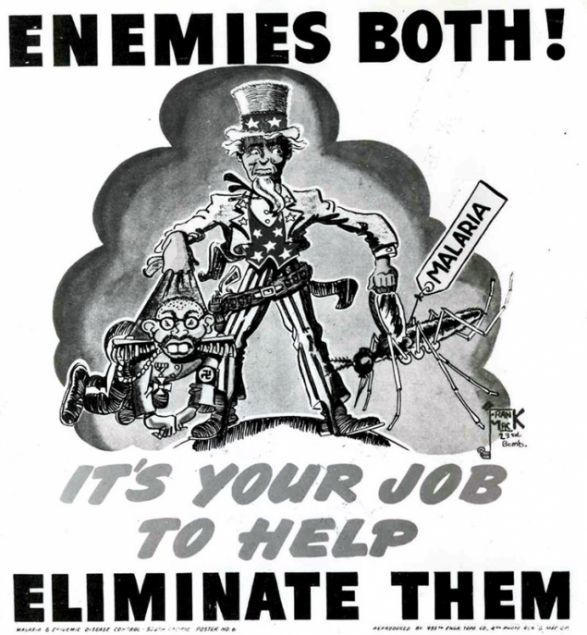 The mosquito-borne disease was a constant scourge for GIs stationed in the Pacific and Mediterranean theaters. General MacArthur’s retreat to the malarial Philippine peninsula of Bataan in early 1942 led directly to his sickly army’s surrender to the Japanese a few months later. The illness continued to cripple American forces during the ensuing campaigns in Papua New Guinea and Guadalcanal, where it was so rampant that a division commander ordered that no Marine be excused from duty without a temperature of at least 103°F.

Troops in Southern Europe faced similar problems. During the Seventh Army’s Sicilian campaign from July to September 1943, 21,482 soldiers were admitted to the hospital for malaria; 17,535 were admitted for battle casualties. 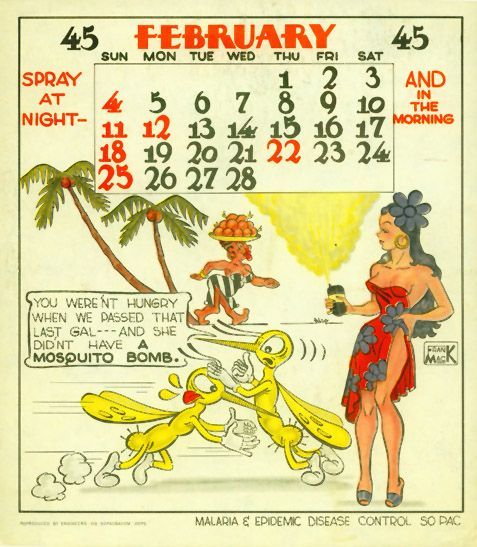 To give an indication of the severity of malaria and the impact it could have on the battlefield, estimates from the Philippines in 1942 indicate that roughly 24,000 out of the 75,000 American and Filipino defenders were suffering from malaria at the time of the invasion. Given that the Japanese invasion force included only 57,000 troops, the loss of an entire division’s worth of Soldiers was significant. The situation was so severe that the commander of the Commanding Office of General Hospital 2 wrote to his superiors saying:

“If the malaria situation is not brought under control, the efficiency of the whole Army will be greatly impaired; in fact it will be unable to perform its combat functions. It is my candid and conservative opinion that if we do not secure a sufficient supply of quinine for our troops from front to rear that all other supplies we may get, with the exception of rations, will be of little or no value.” 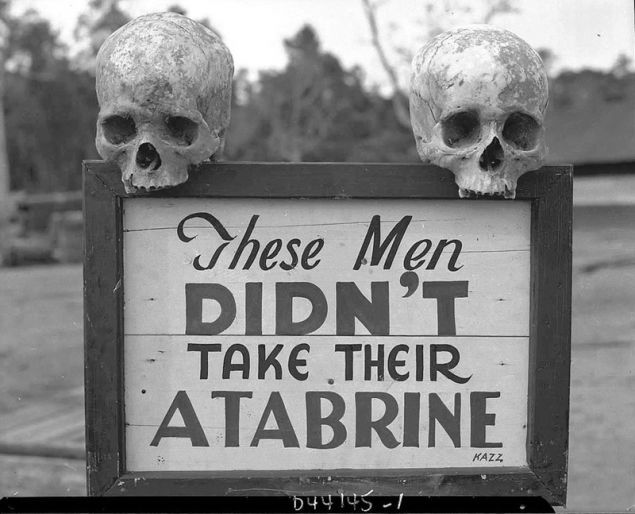 Between 60 and 65 percent of Soldiers serving in the South Pacific reported having malaria at some point. Reports indicate that some enlisted men would refuse to take the anti-malaria drug Atabrine because continual use turned the skin a sallow yellow color. Atabrine was only partially effective to begin with, and Soldiers who stopped use were virtually unprotected. 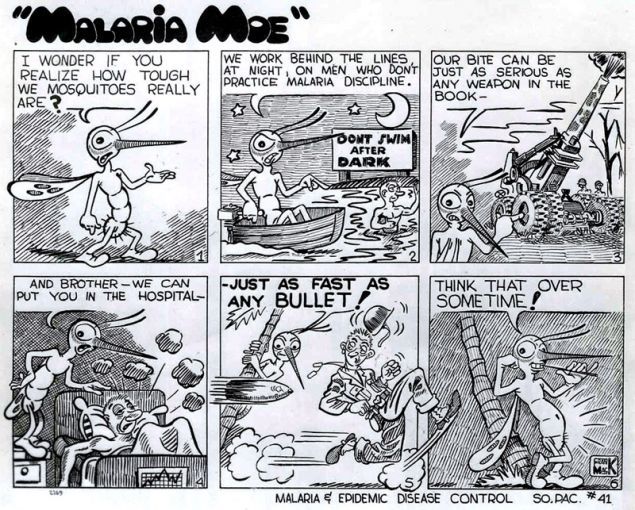 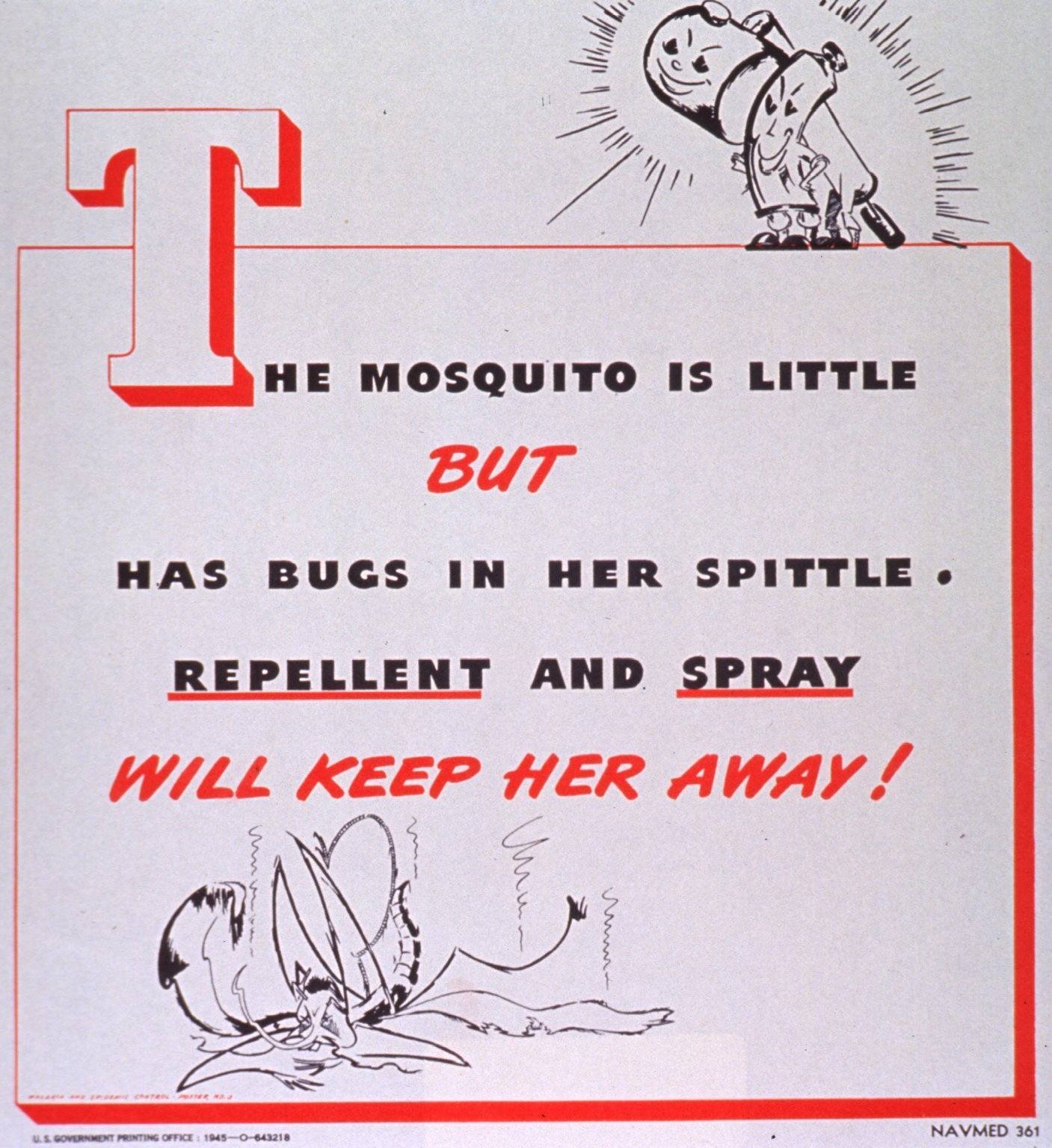 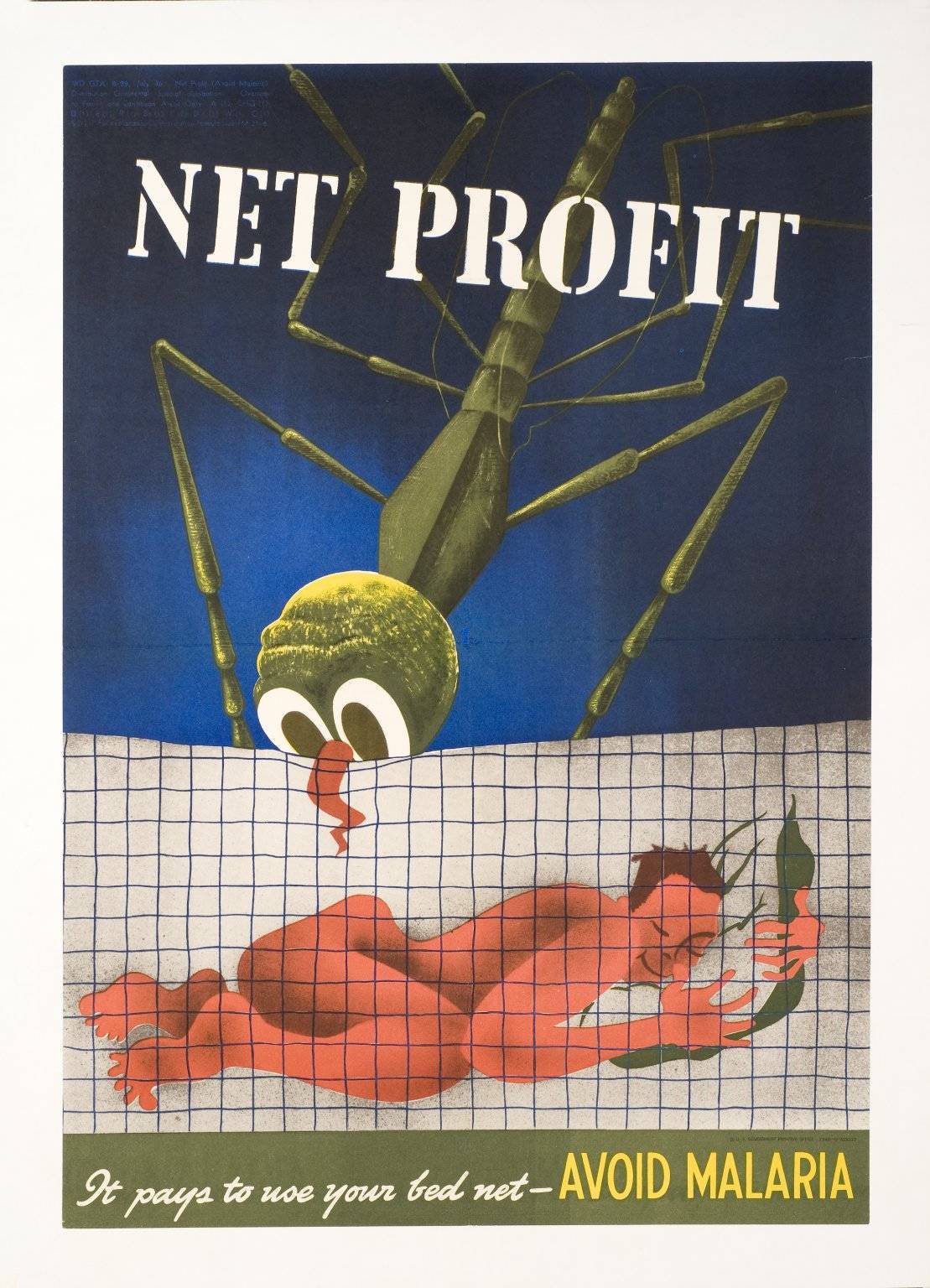 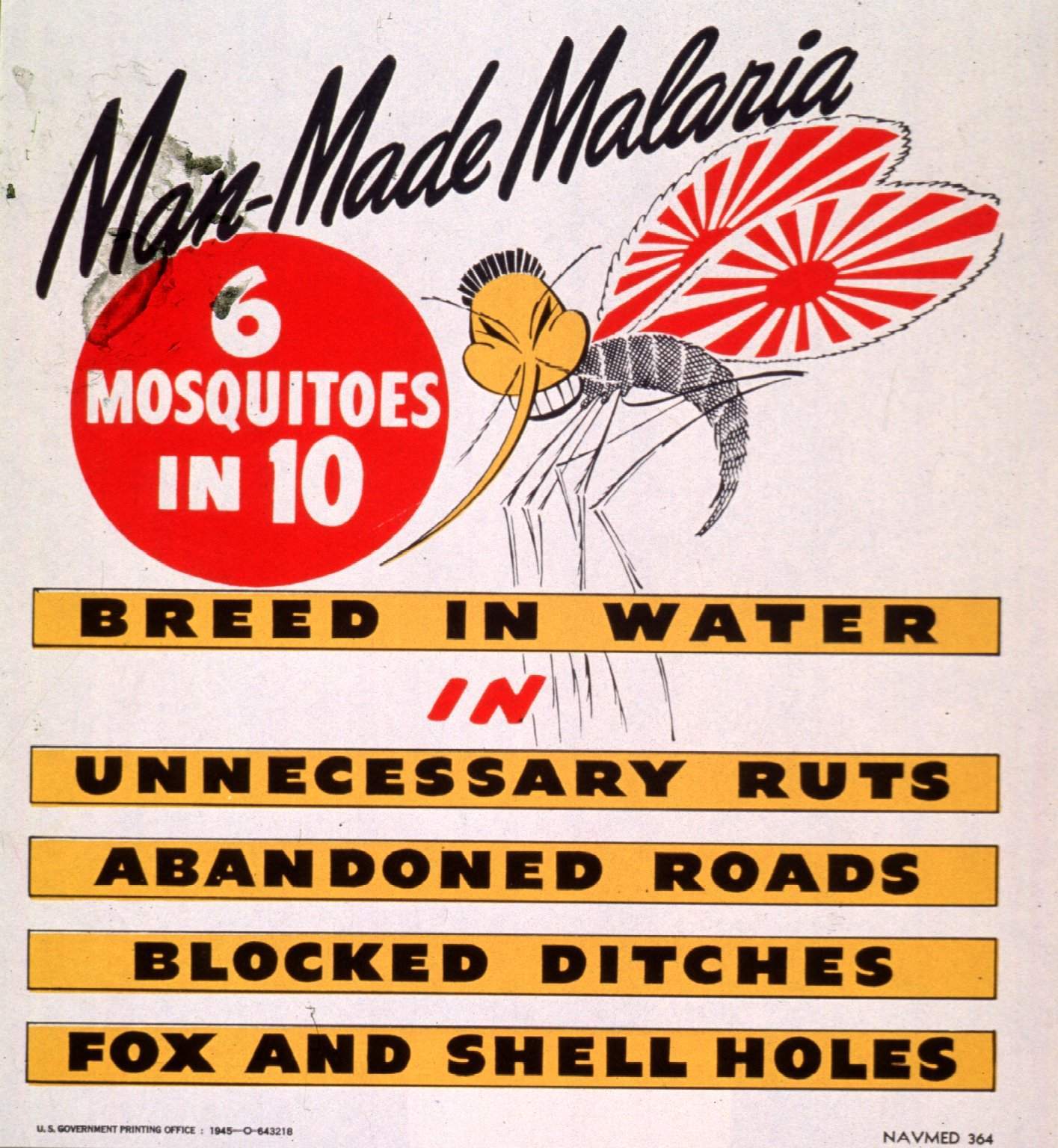 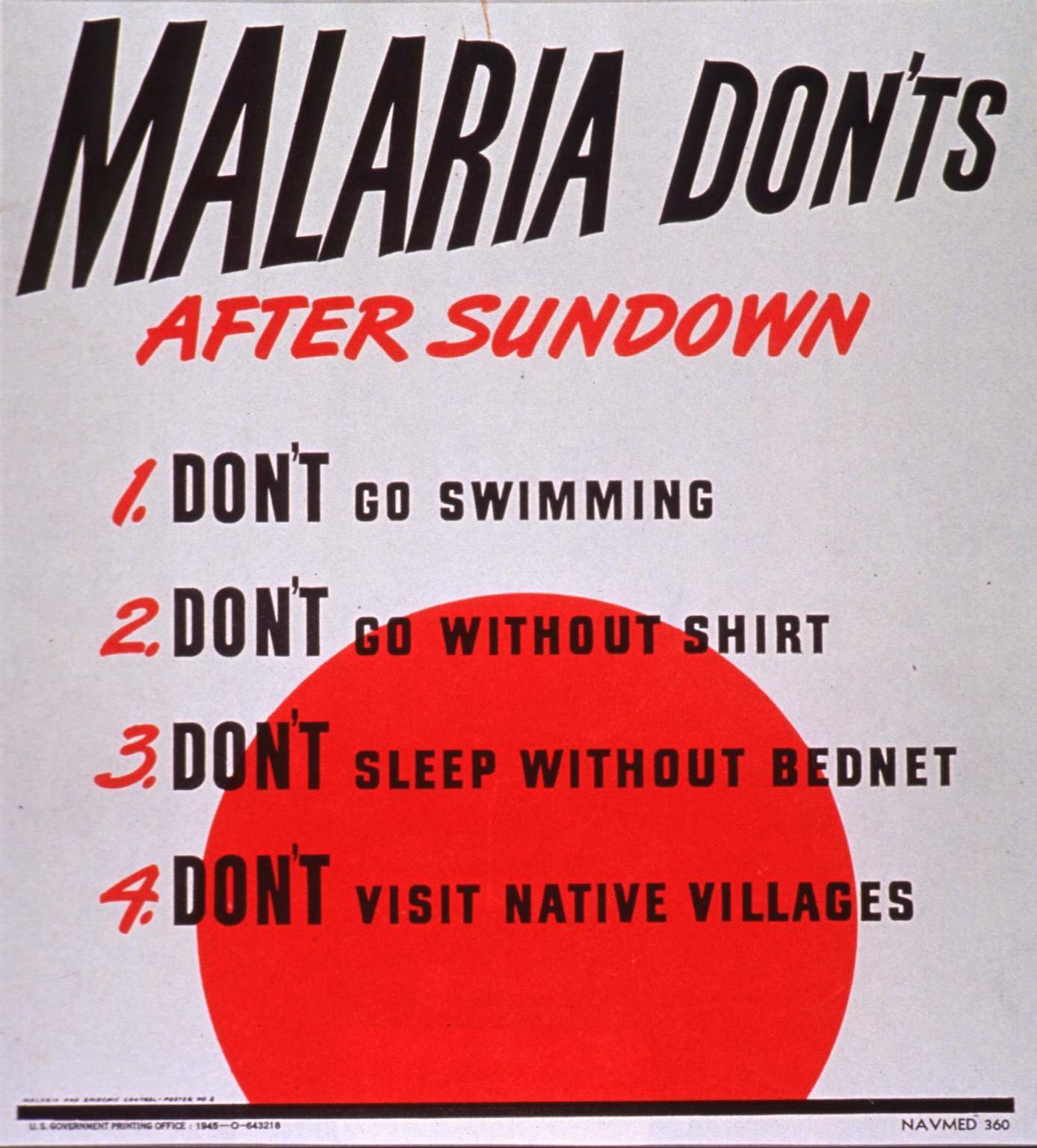 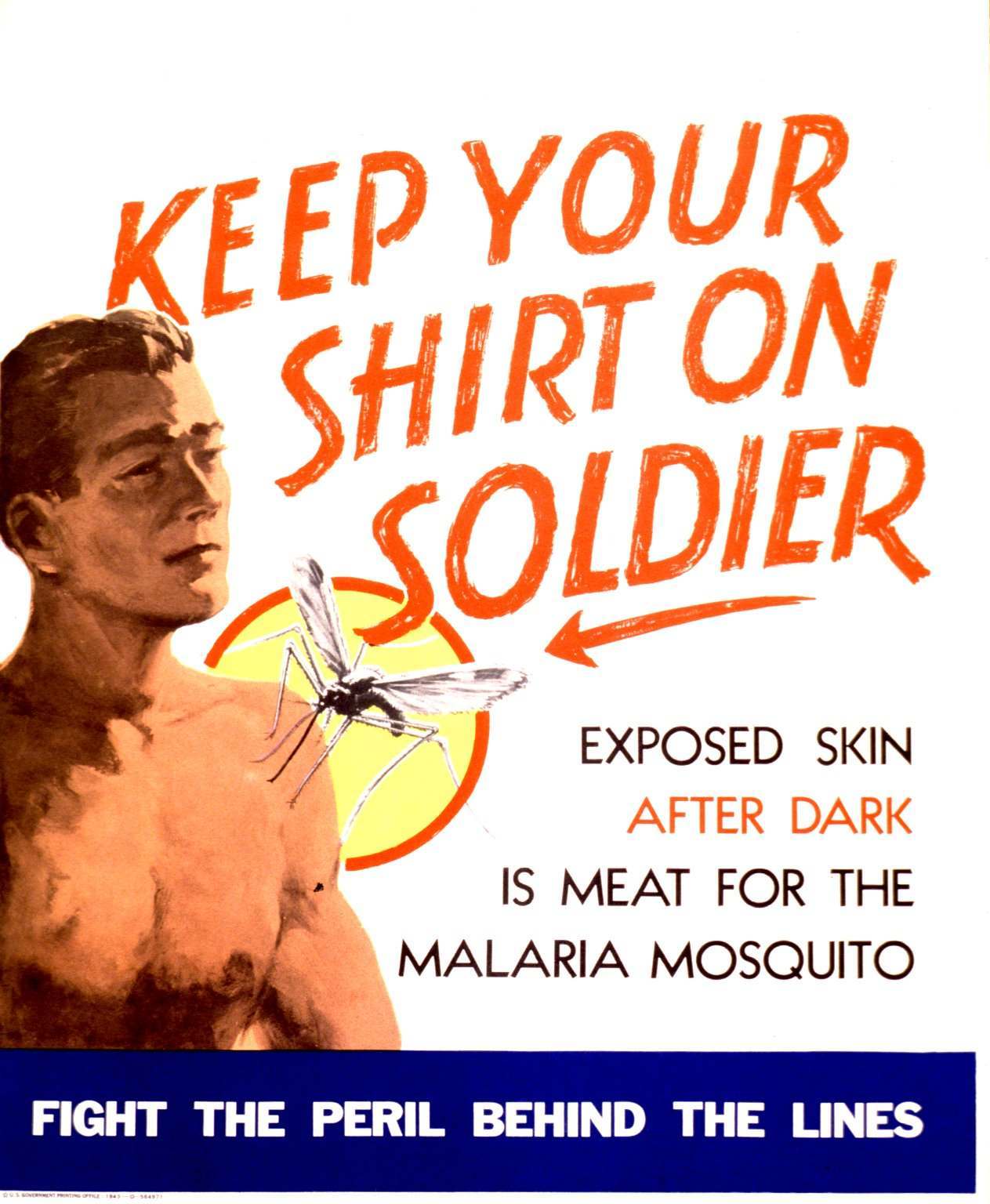 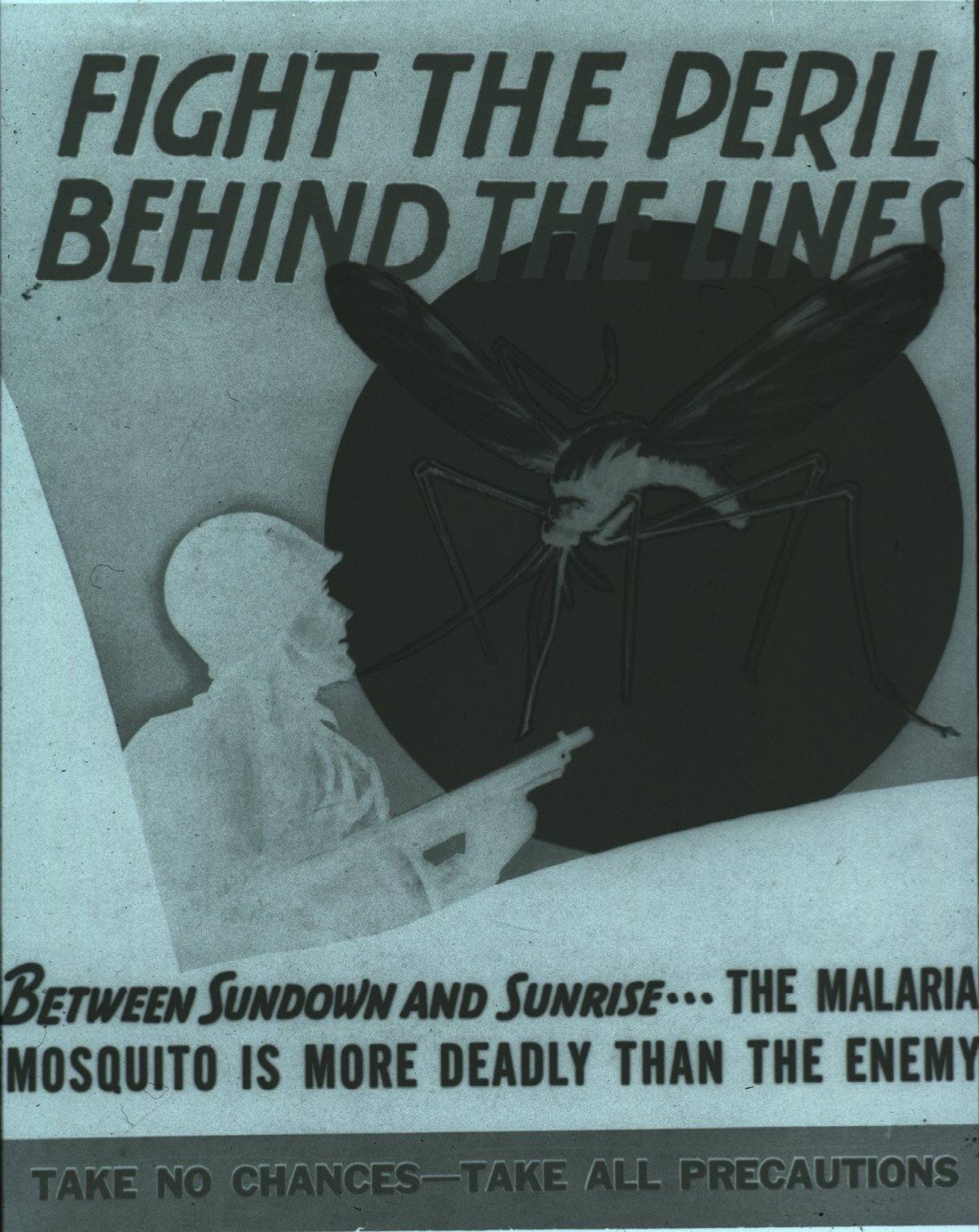 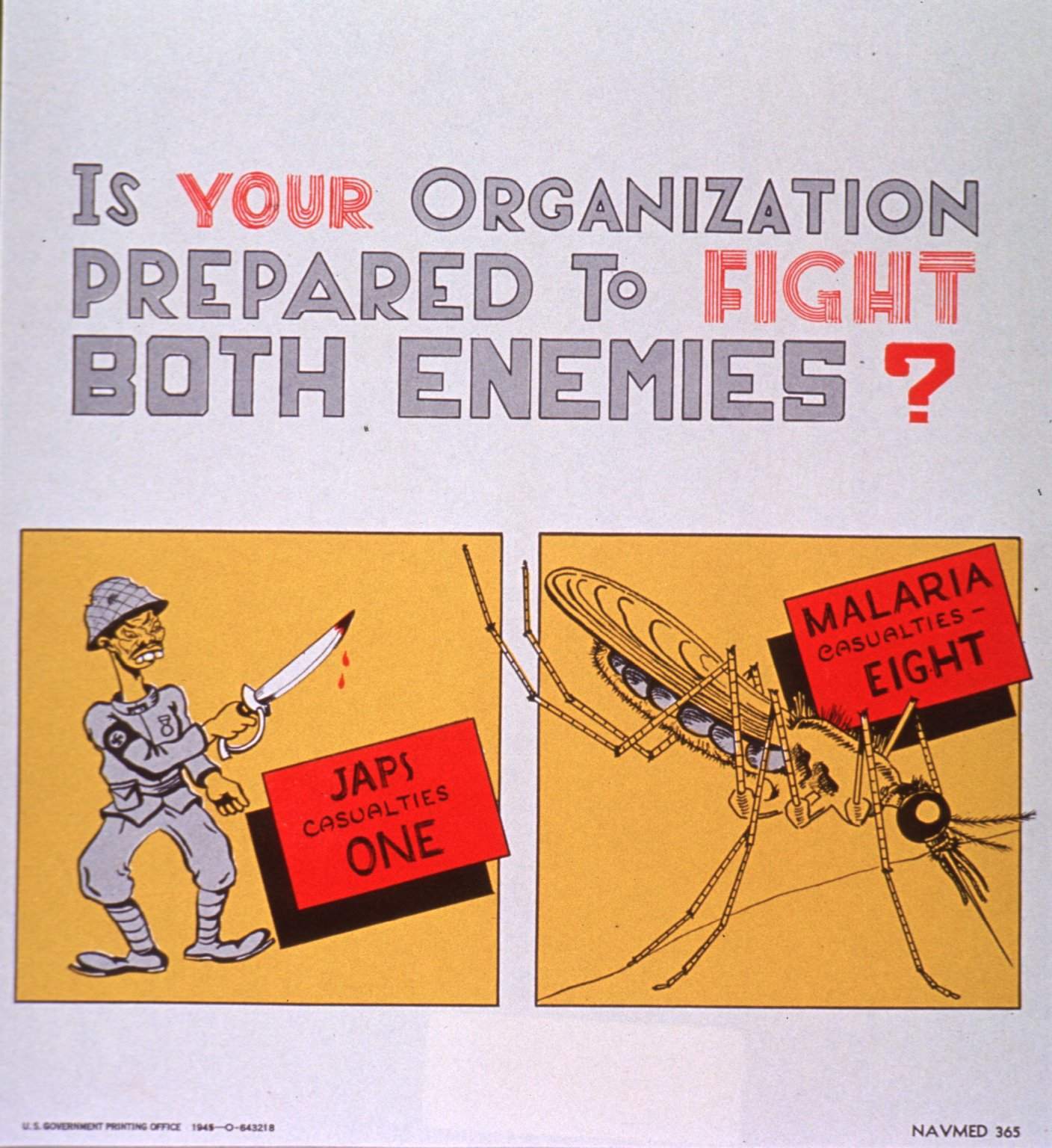 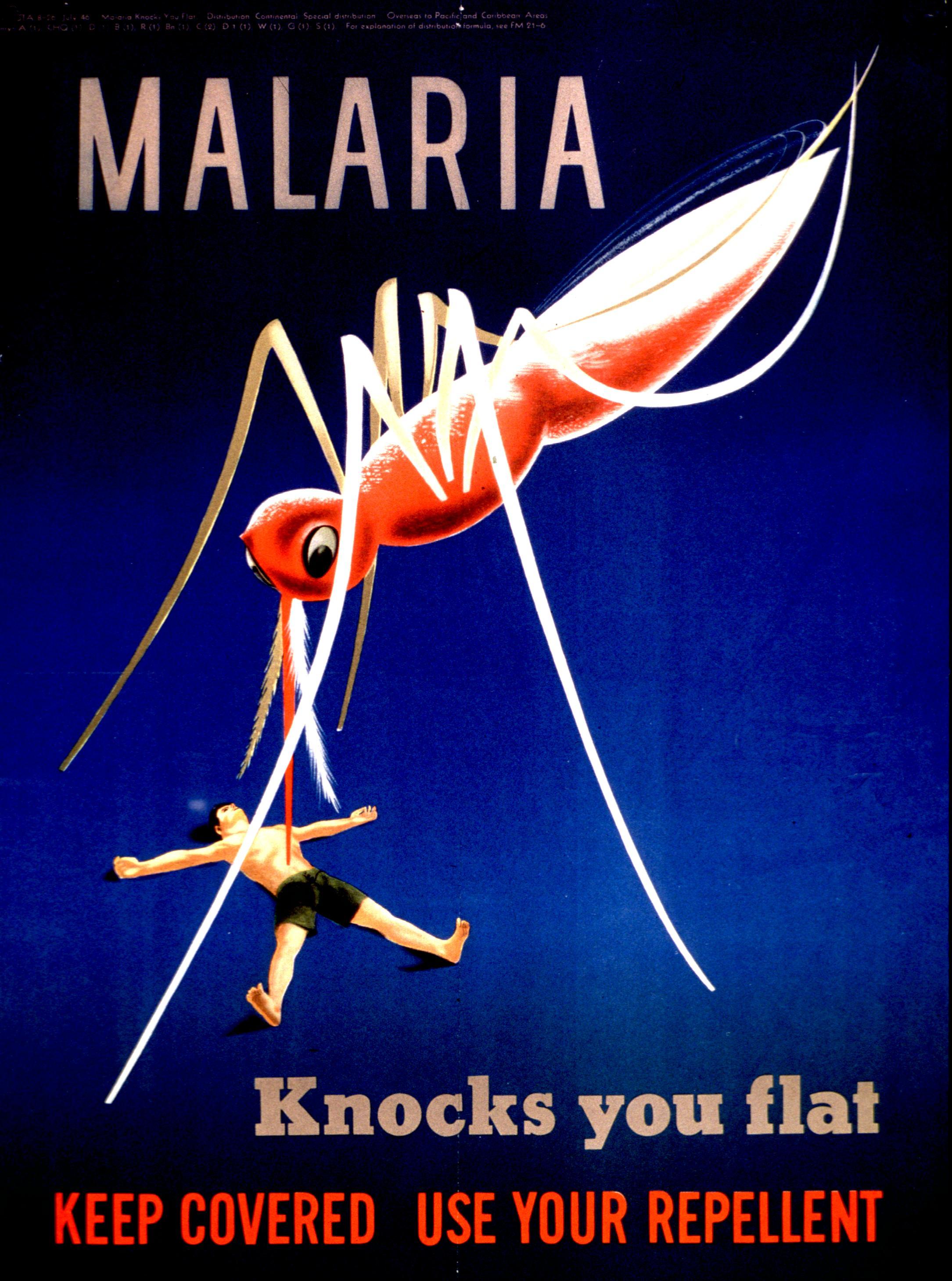 Malaria knocks you flat, keep covered, use your repellent 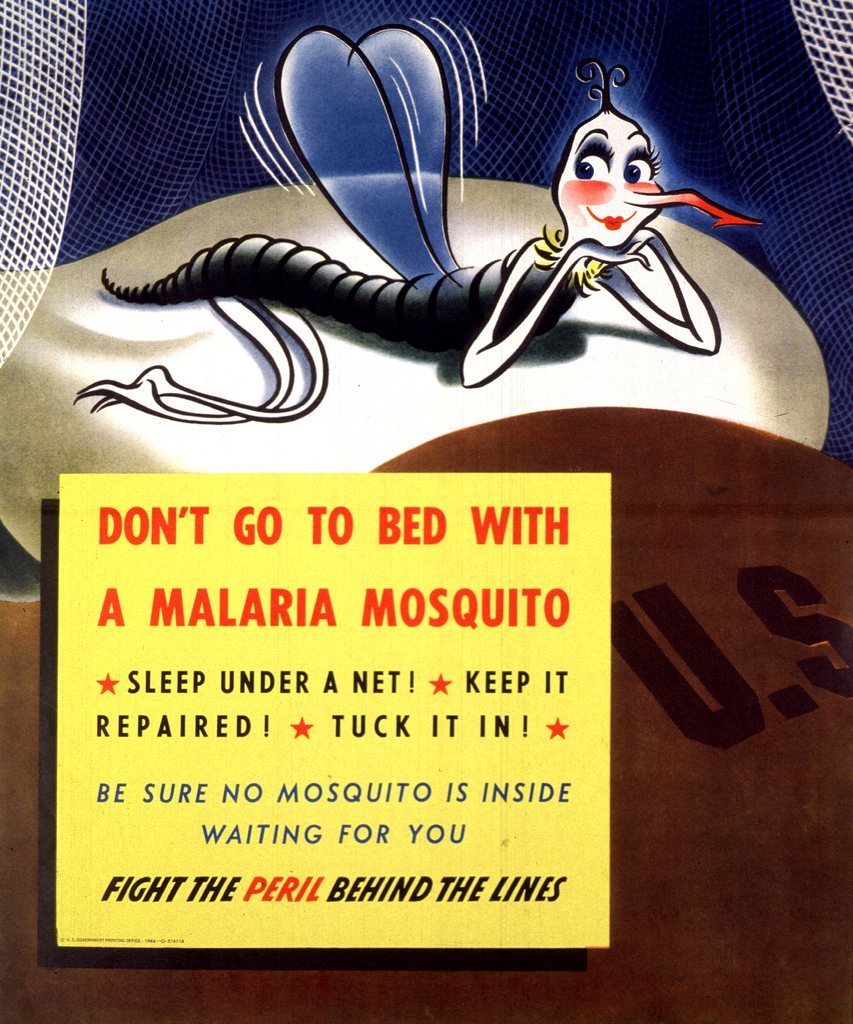 And there was Dr Seus.

Before he cooked up green eggs or taught us to count colorful fish, Dr. Seuss was a captain in the U.S. Army. And during World War II, the author and illustrator, whose given name was Theodor Geisel, spent a few years creating training films and pamphlets for the troops.

One of Geisel’s Army cartoons was a booklet aimed at preventing malaria outbreaks among GIs by urging them to use nets and keep covered up.

In 1943, Germany blocked the Allies’ supply of the anti-malaria drug quinine. So Geisel created a booklet explaining to the troops how to avoid harmful encounters with “blood-thirsty Ann,” the character he created to represent Anopheles, the genus of the mosquitoes that transmit the disease…

Geisel also drew a map of the malaria epidemic around the world, which was printed on the back of a poster distributed by the U.S. War Department to disseminate news to troops. 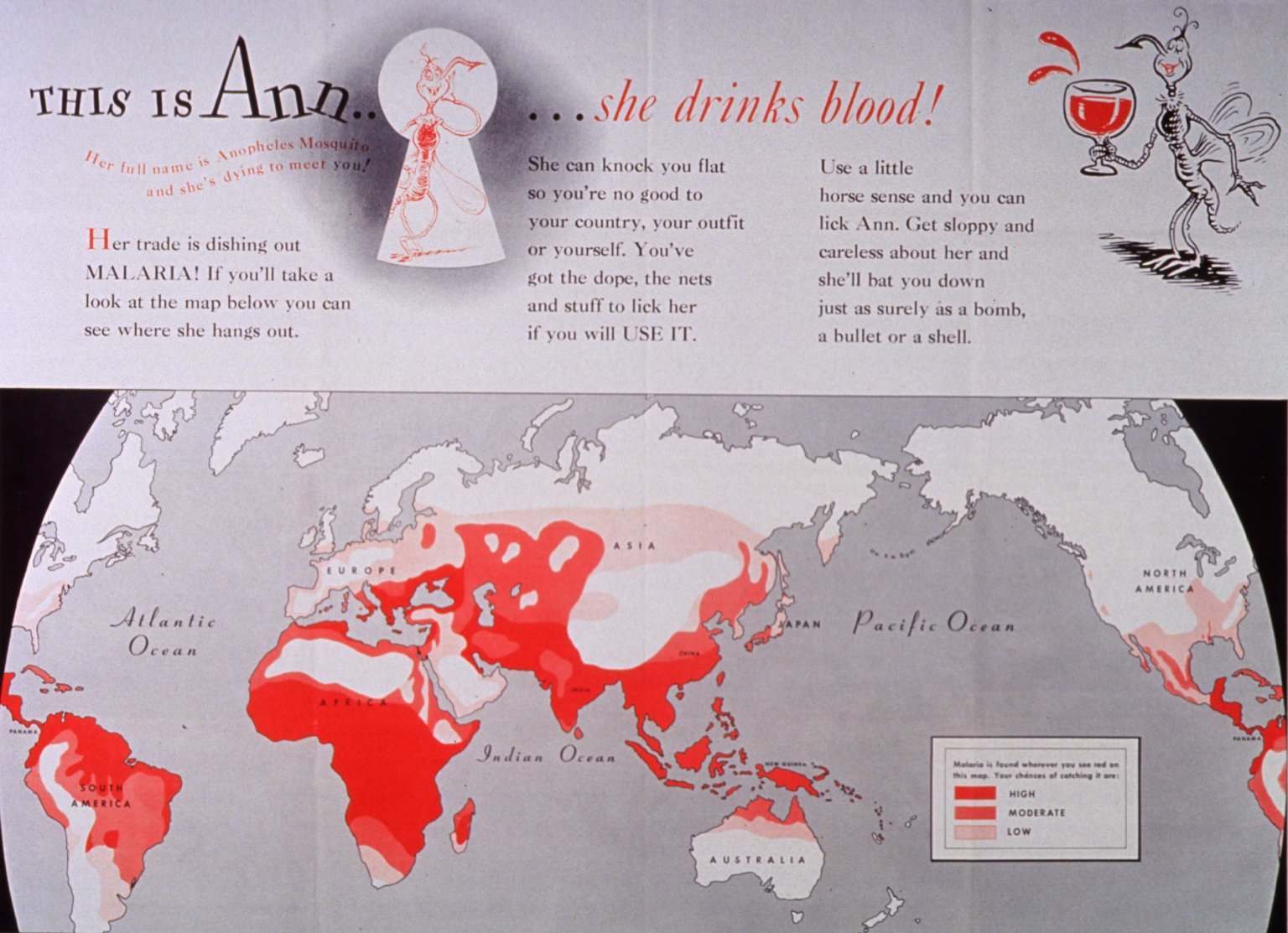 According to the Naval Department Library, this map was printed on the back of a Newsmap (two sided poster) that showed the five war fronts in 1943: Russia, Italy, “air offensive”, southwest Pacific and Burma.

The text as transcribed by the Navy Department Library reads:

THIS IS ANN…..she drinks blood!

Her full name is Anopheles Mosquito and she’s dying to meet you. Her trade is dishing out MALARIA! If you’ll take a look at the map below you can see where she hangs out.

She can knock you flat so you’re no good to your country, your outfit or yourself. You’ve got the dope, the nets and stuff to lick her if you will USE IT.

Use a little horse sense and you can lick Ann. Get sloppy and careless about her and she’ll bat you down just as surely as a bomb, a bullet or a shell.

We’ll end with a vide of Private SNAFU vs Malaria Mike, created by Mel Blanc and Chuck Jones (whatyever happned to them?) in 1944: 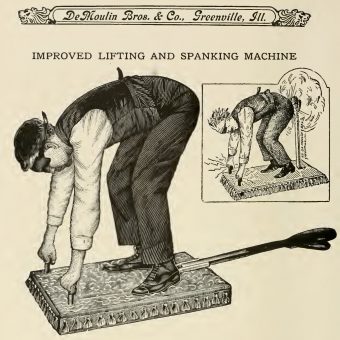