In 1902 the American author Jack London visited his namesake city – at the time when it was still the largest in the world. In a book that became to be known as The People of the Abyss he described the time when he lived in the Whitechapel district sleeping in workhouses, so-called doss-houses and even on the streets. It was said that about half a million people were living in these awful and terrible conditions in Britain’s capital city. London took the photographs that illustrated his extraordinary book (between 1900 and 1916 the American writer took more than 12 thousand photographs). London was most disturbed by the number of “old men, young men, all manner of men, and boys to boot, and all manner of boys” who had no other choice other than to sleep on the streets. “Some were drowsing standing up; half a score of them were stretched out on the stone steps in most painful postures…the skin of their bodies showing red through the holes, and rents in their rags.”

London had trouble finding anyone to show him the East End:

“But you can’t do it, you know,” friends said, to whom I applied for assistance in the matter of sinking myself down into the East End of London. “You had better see the police for a guide,” they added, on second thought, painfully endeavouring to adjust themselves to the psychological processes of a madman who had come to them with better credentials than brains.
“But I don’t want to see the police,” I protested. “What I wish to do is to go down into the East End and see things for myself. I wish to know how those people are living there, and why they are living there, and what they are living for. In short, I am going to live there myself.”
“You don’t want to live down there!” everybody said, with disapprobation writ large upon their faces. “Why, it is said there are places where a man’s life isn’t worth tu’pence.”
“The very places I wish to see,” I broke in.
“But you can’t, you know,” was the unfailing rejoinder.”

According to Michael Shelden, George Orwell‘s biographer, the English writer had read London’s book while in his teens and greatly inspired as can be seen in Down and Out in Paris and London and the Road to Wigan Pier.

You can buy fine art prints of thee incredible pictures in the shop. 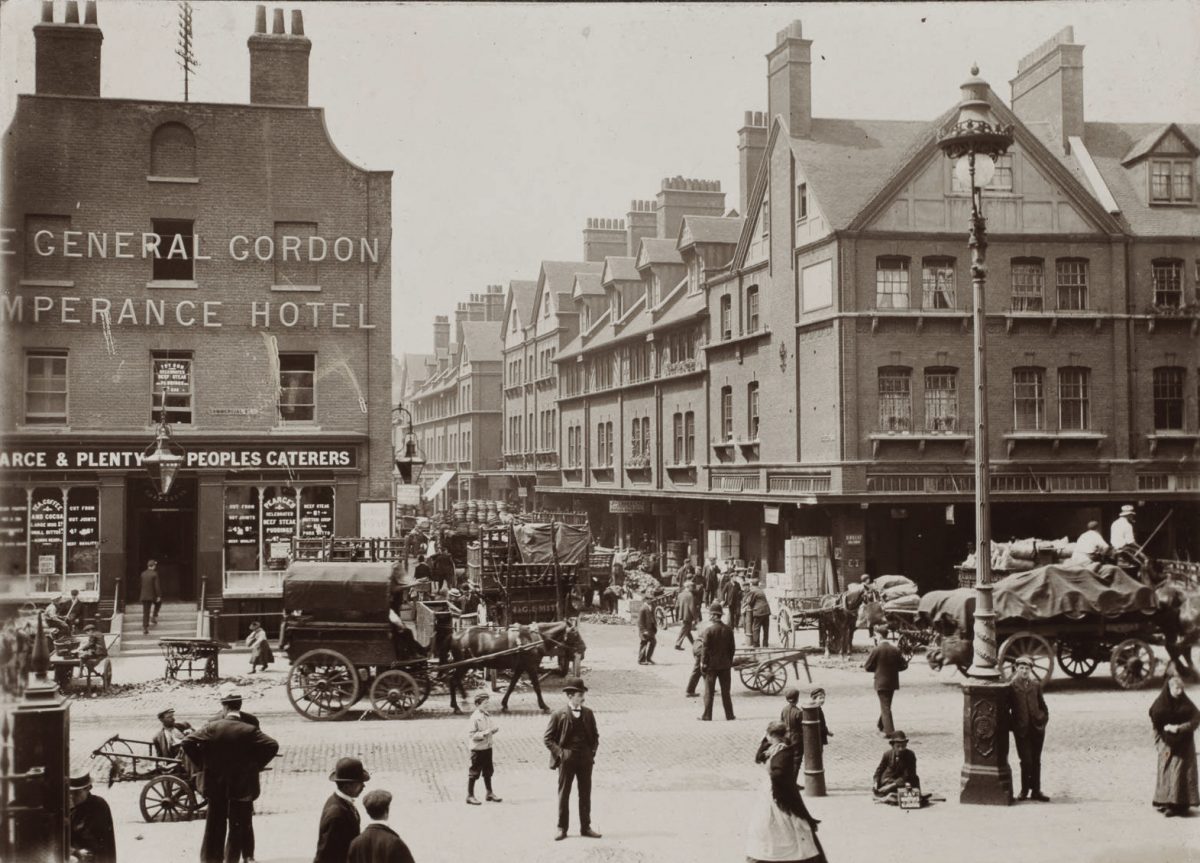 Spitalfields at the junction of Commercial Street and Brushfield Street. The building at the right is Spitalfields Market. To the left is a branch of the Pearce & Plenty cafe chain, with a sign for the General Gordon Temperance Hotel. Buy Prints. 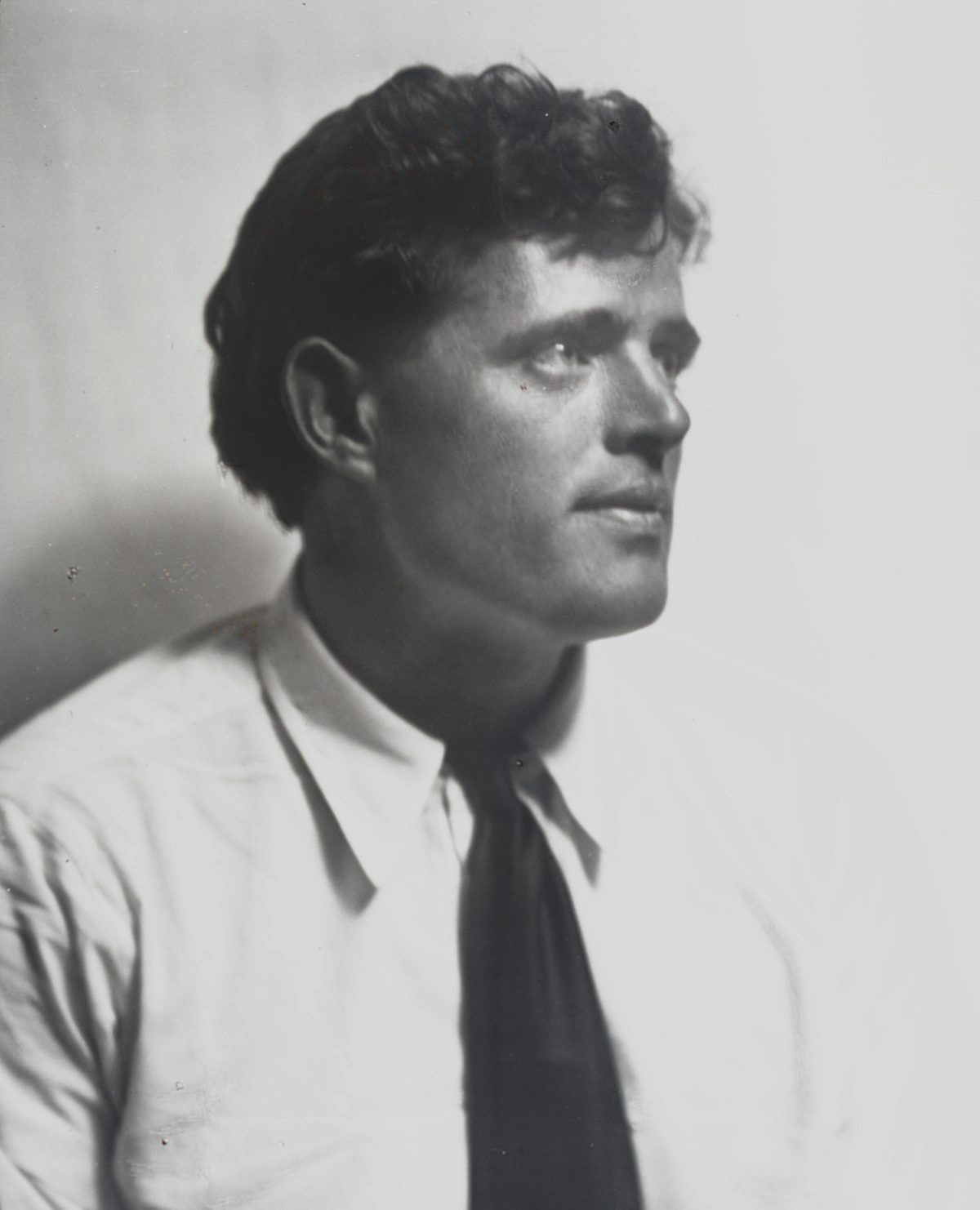 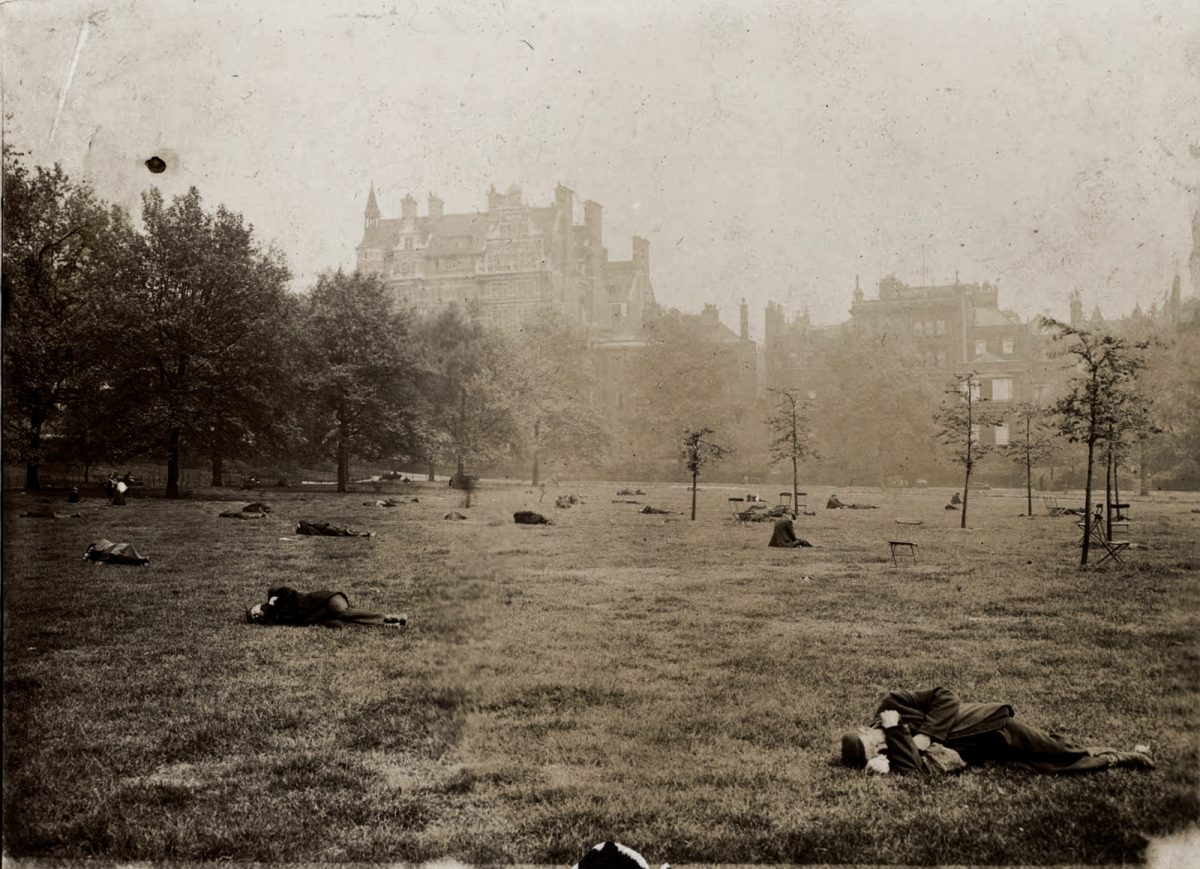 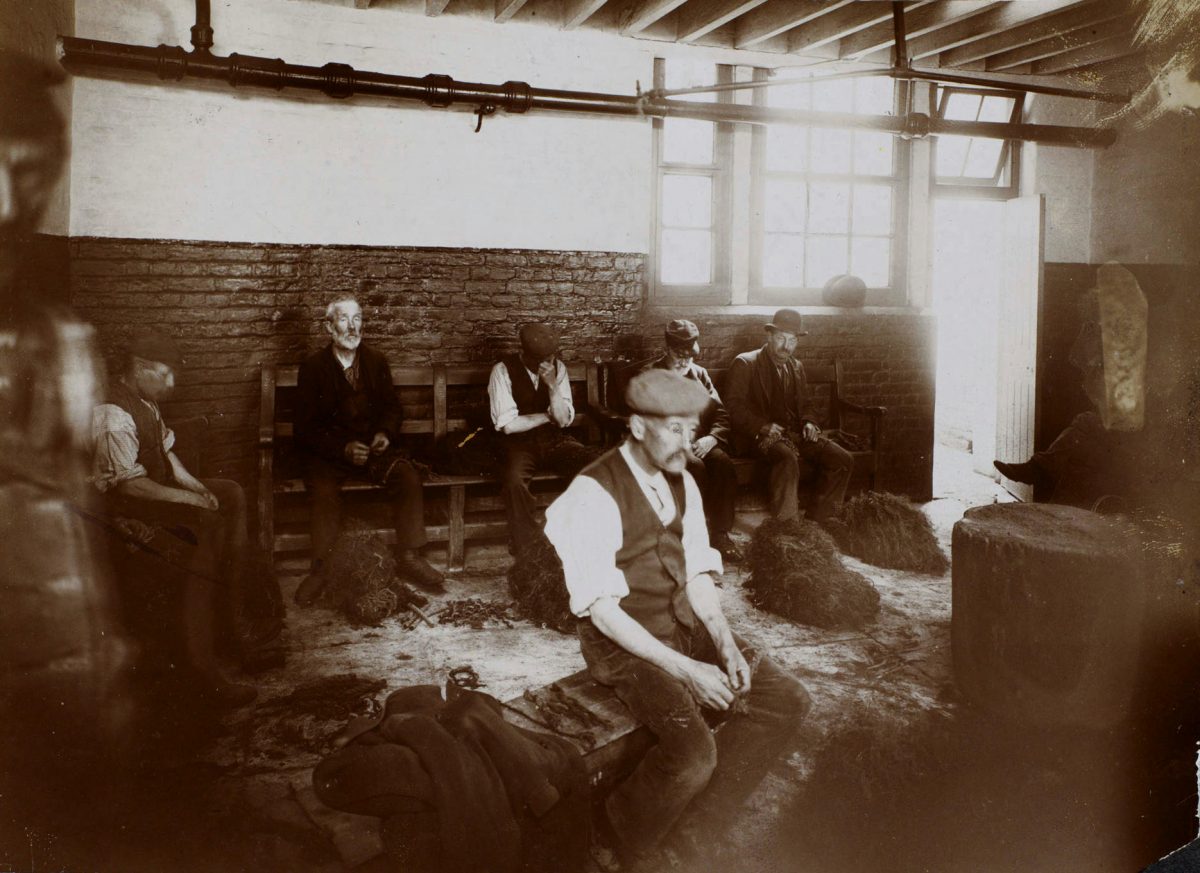 Men working in casual ward of workhouse picking oakum – teasing out of fibres from old ropes and was very hard on the fingers. Buy prints. 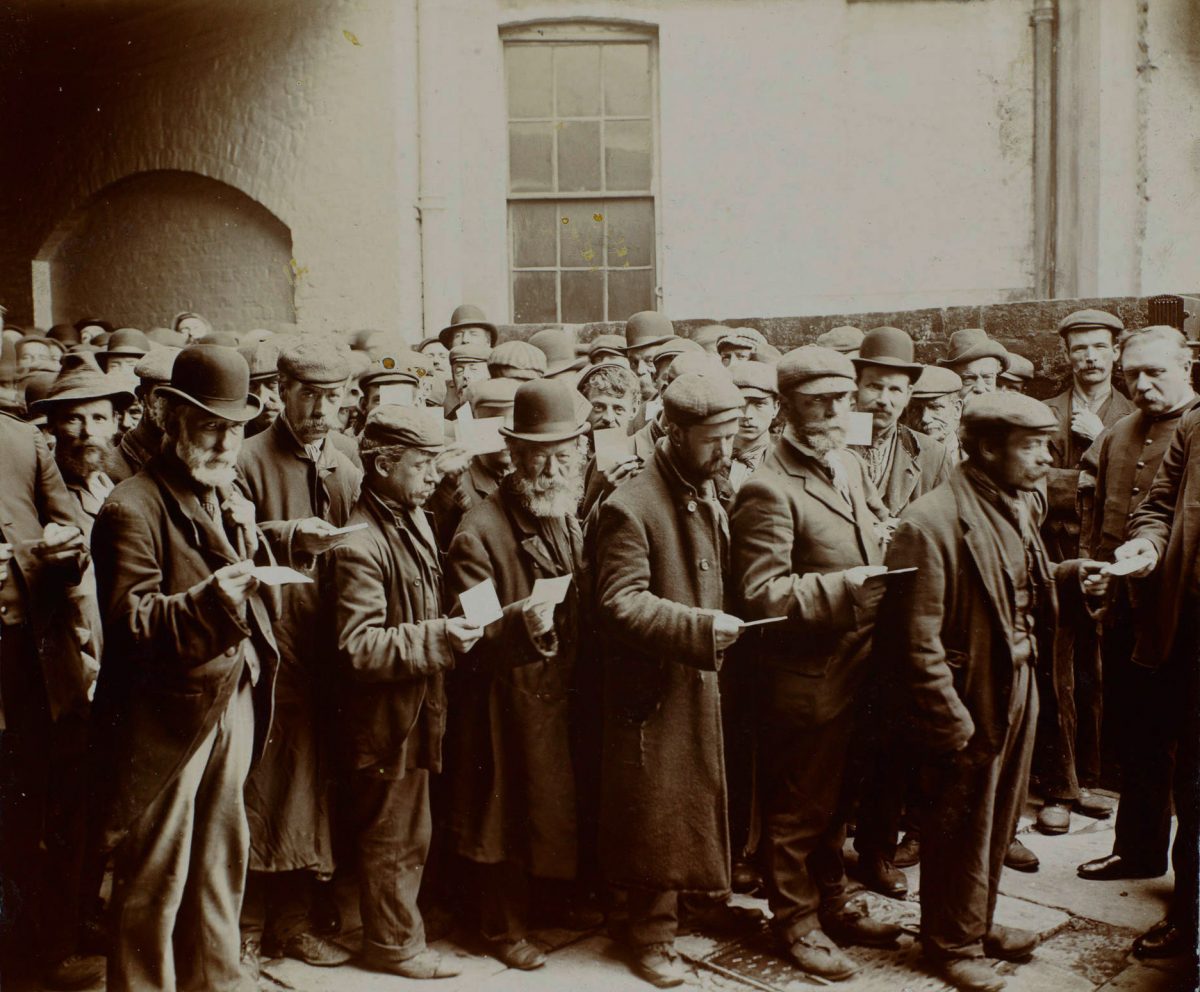 Inside the courtyard of Salvation Army barracks Sunday Morning. 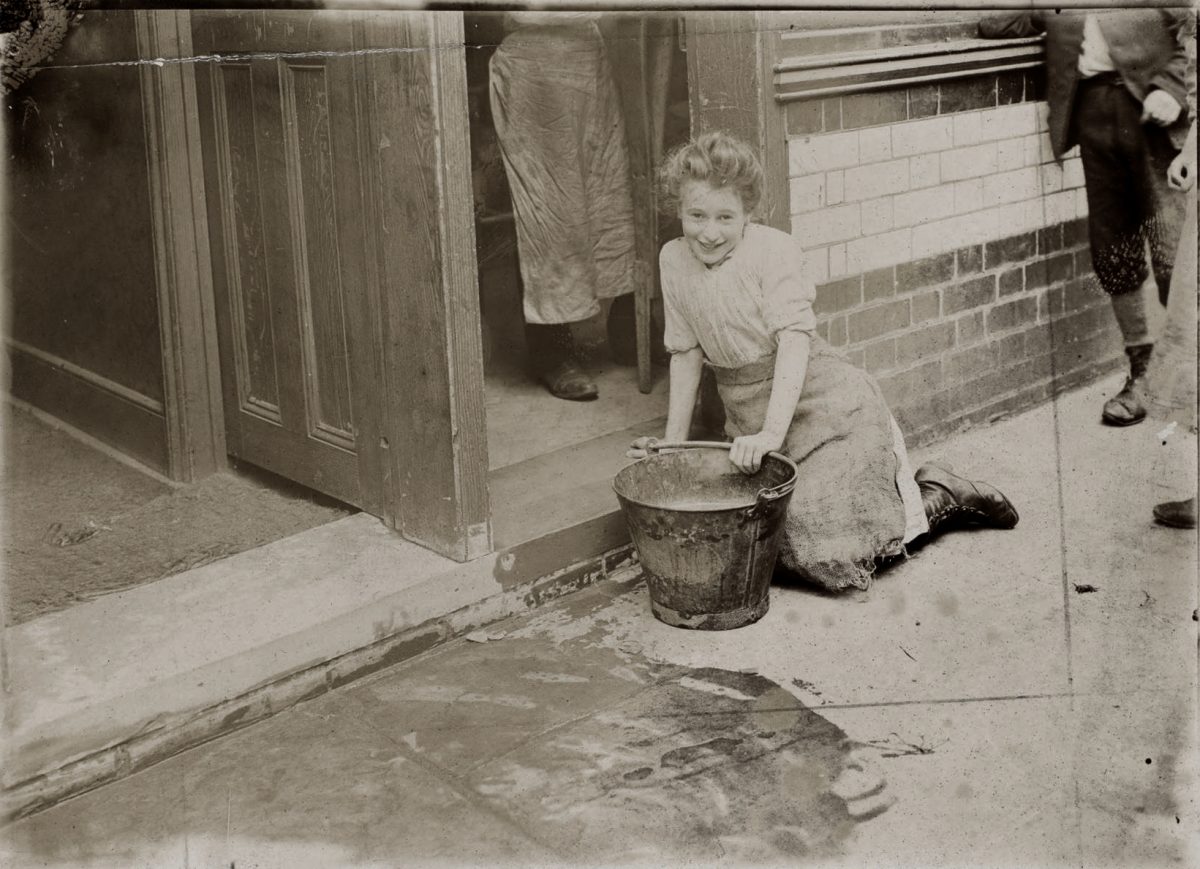 An East End Slavey (a maidservant, especially a hard-worked one.) Buy prints. 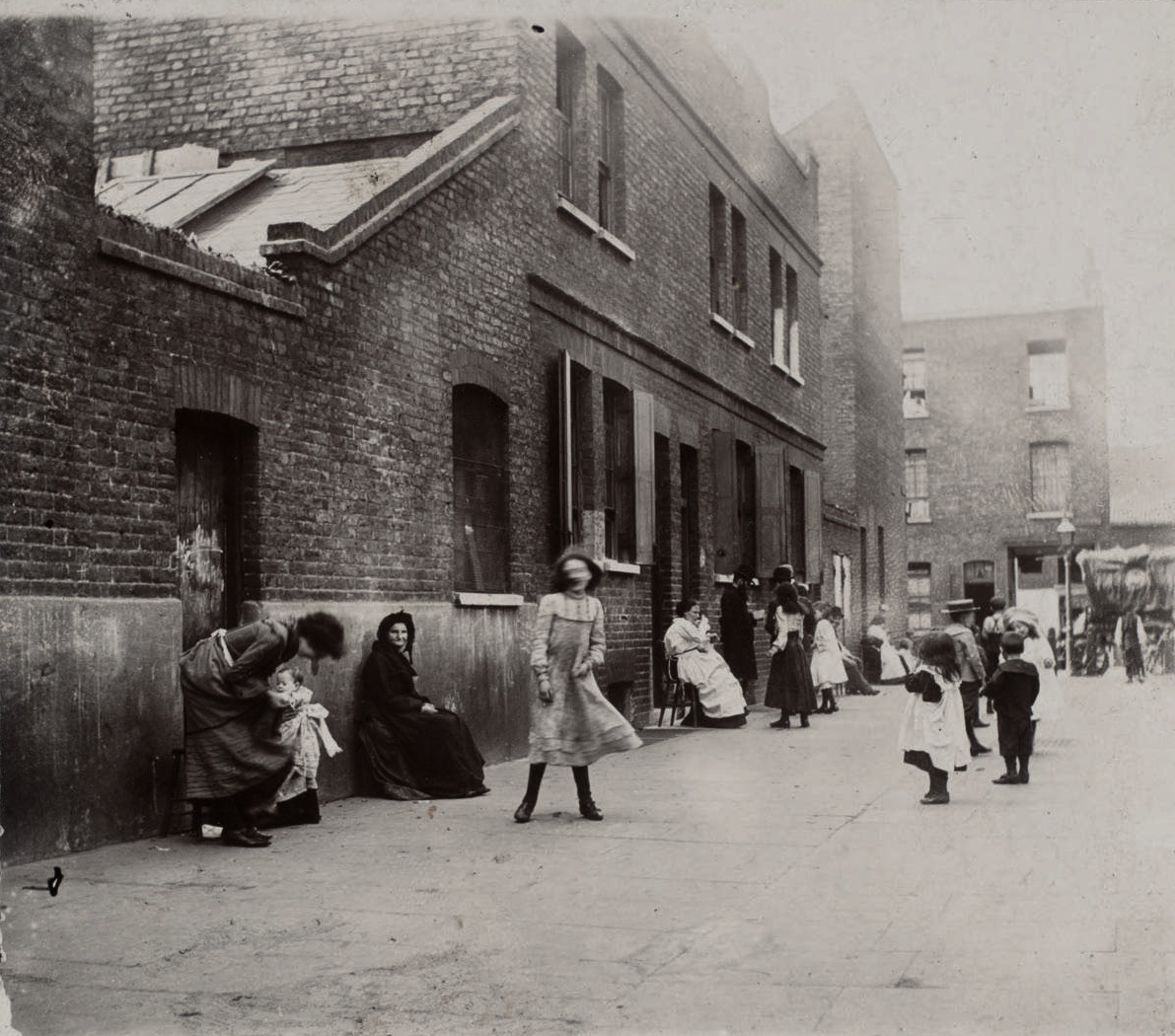 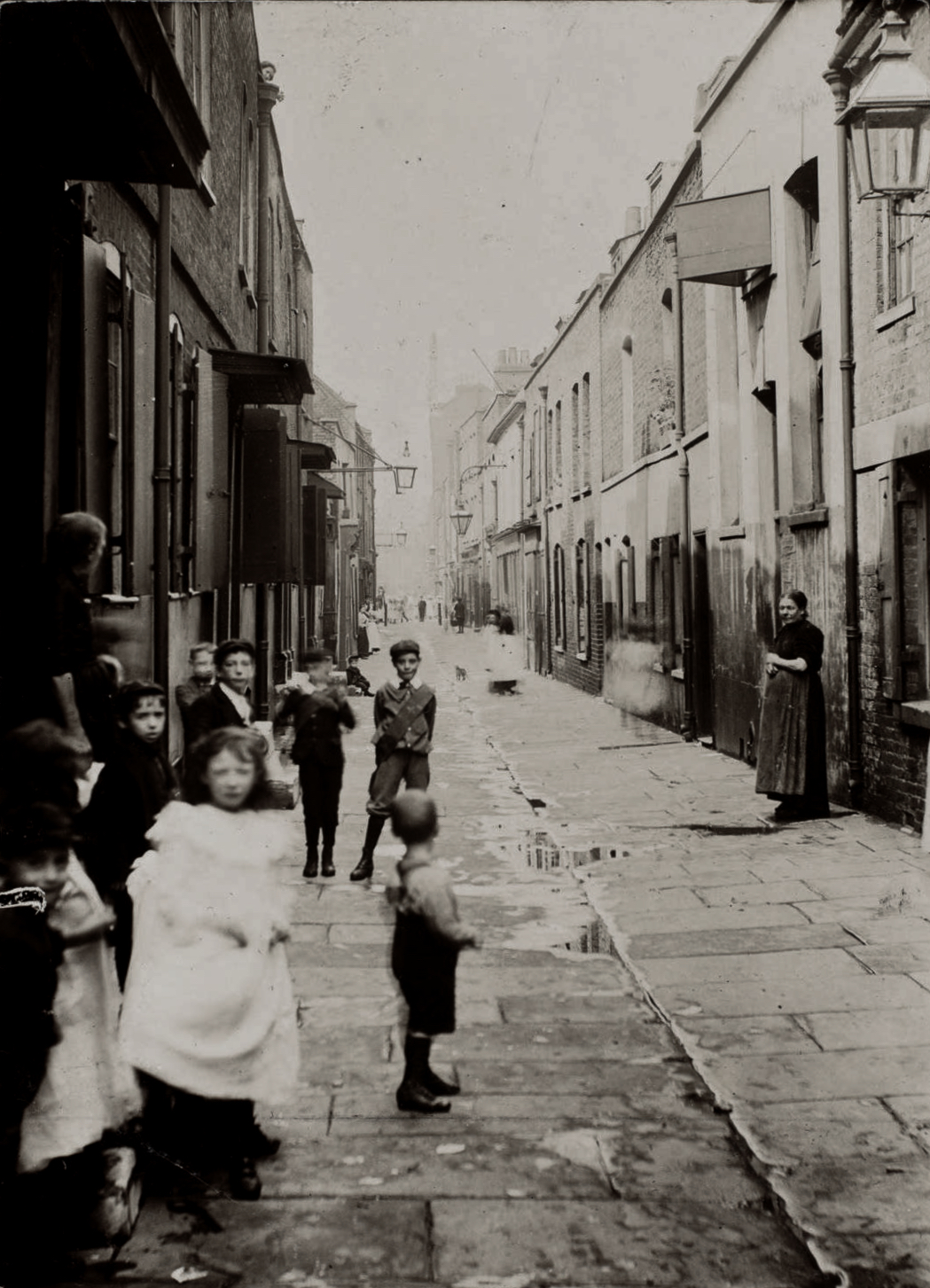 A street in Wapping 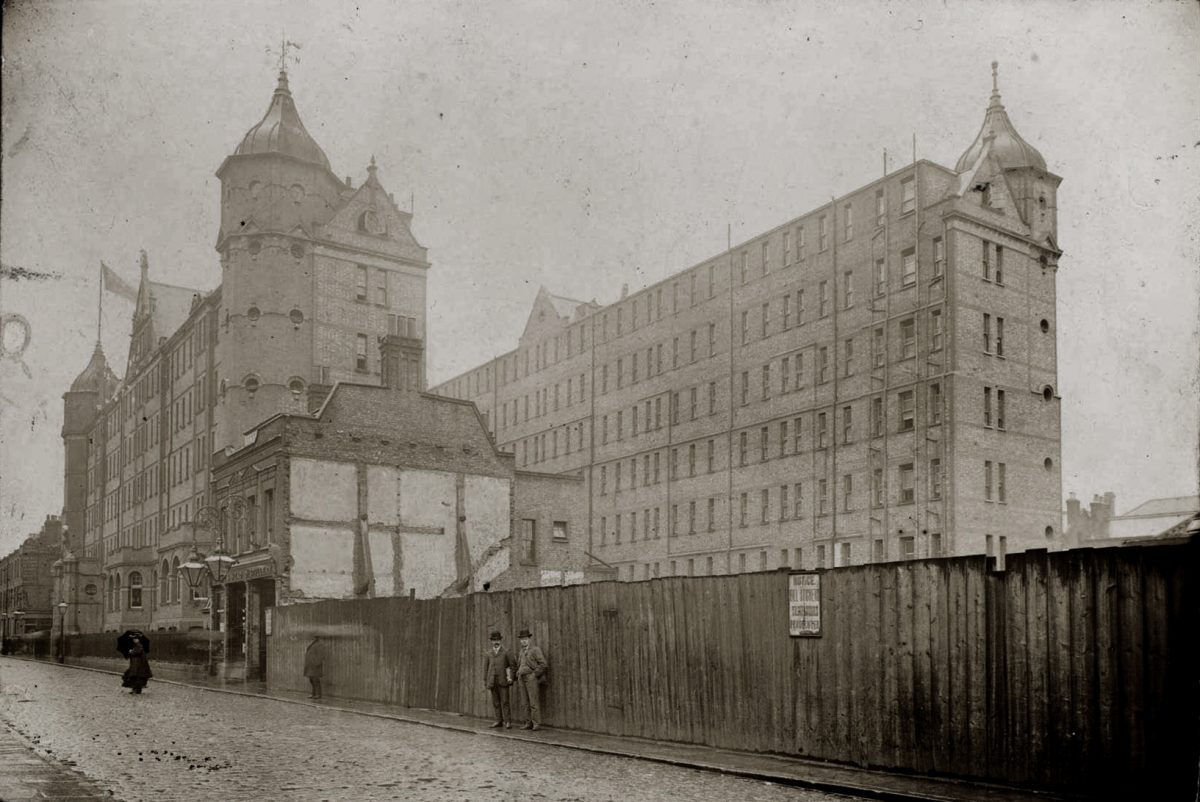 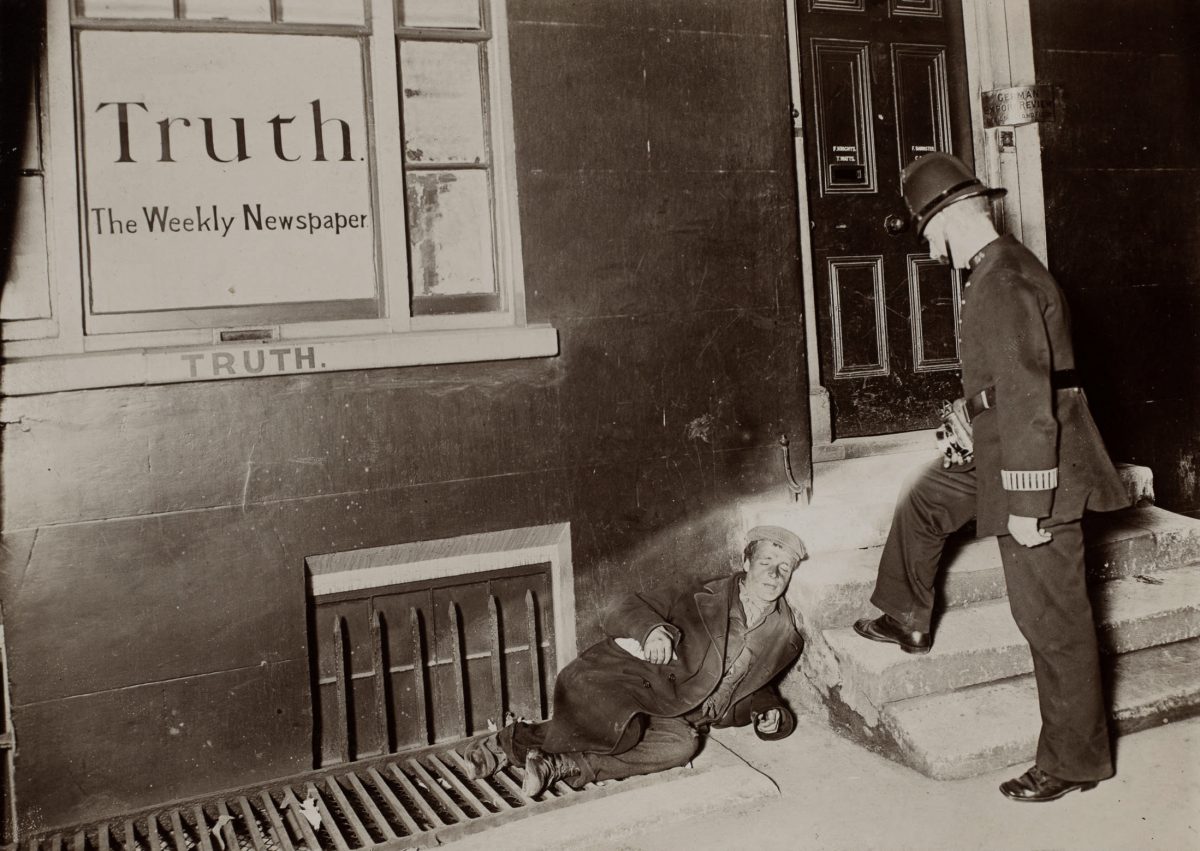 “A policeman shines a flashlight onto a young man sleeping on the sidewalk against a building. A sign displayed in a window to the left reads: “Truth The Weekly Newspaper.” Buy prints. 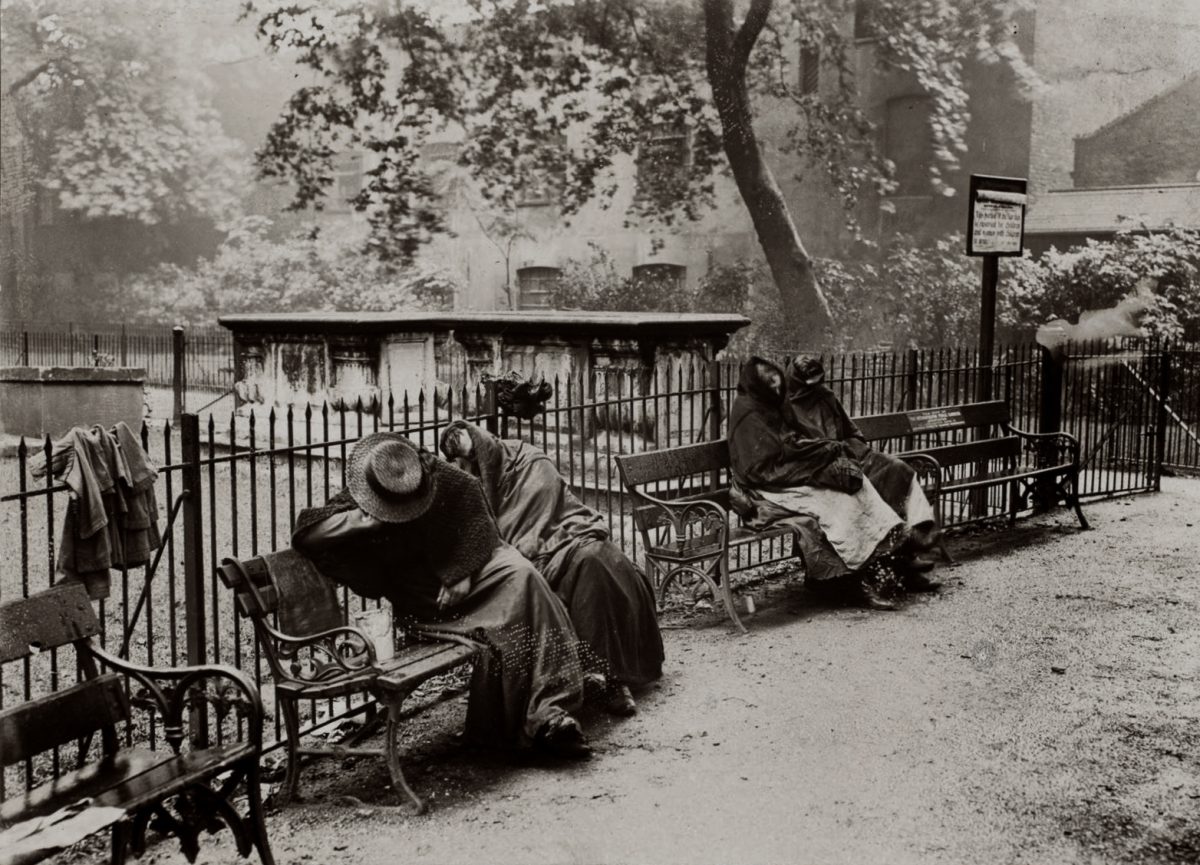 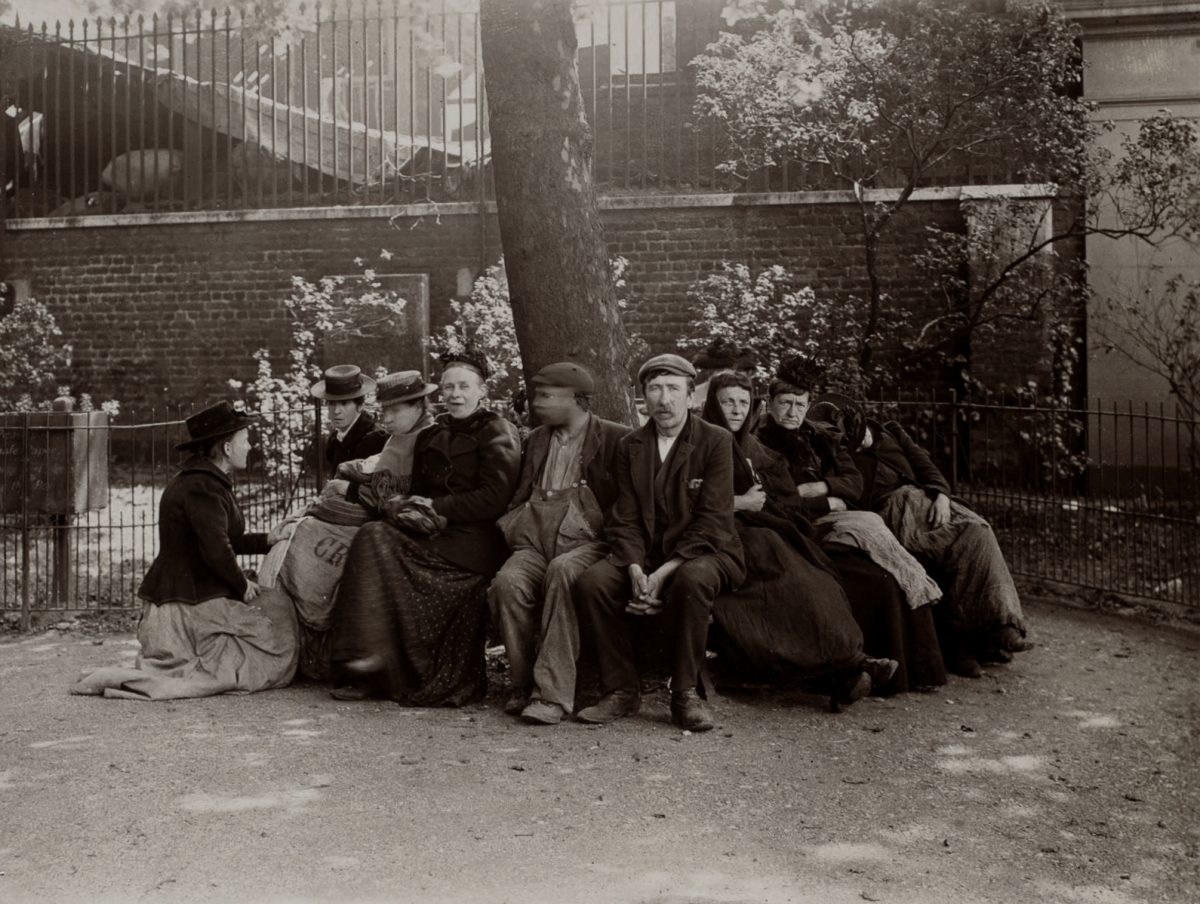 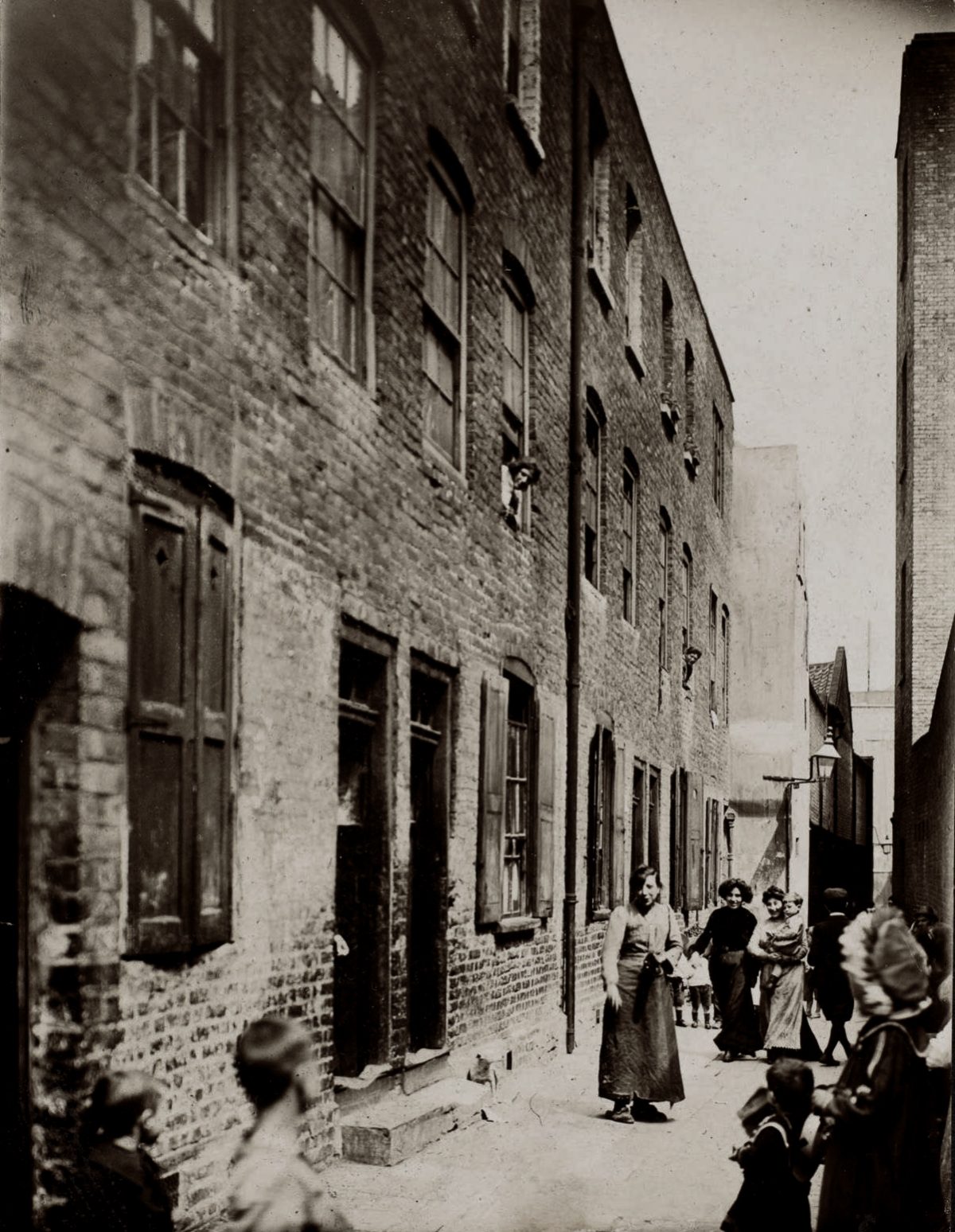 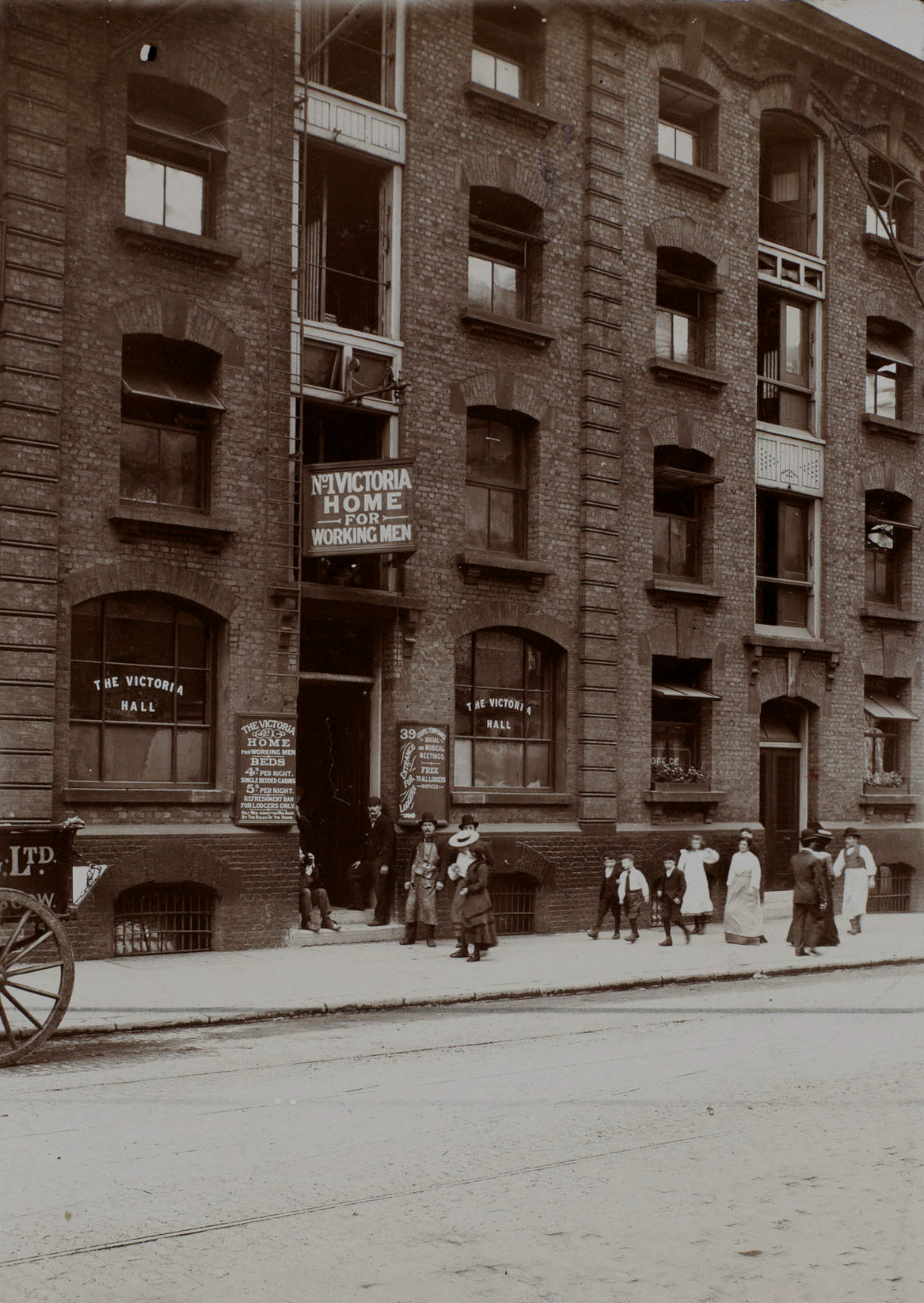 A group of men stand out on the stoop of a four-story brick building, while a few women and children walk by on the sidewalk. A sign over the entrance reads: “No. 1 Victoria Home for Working Men.” (original caption) 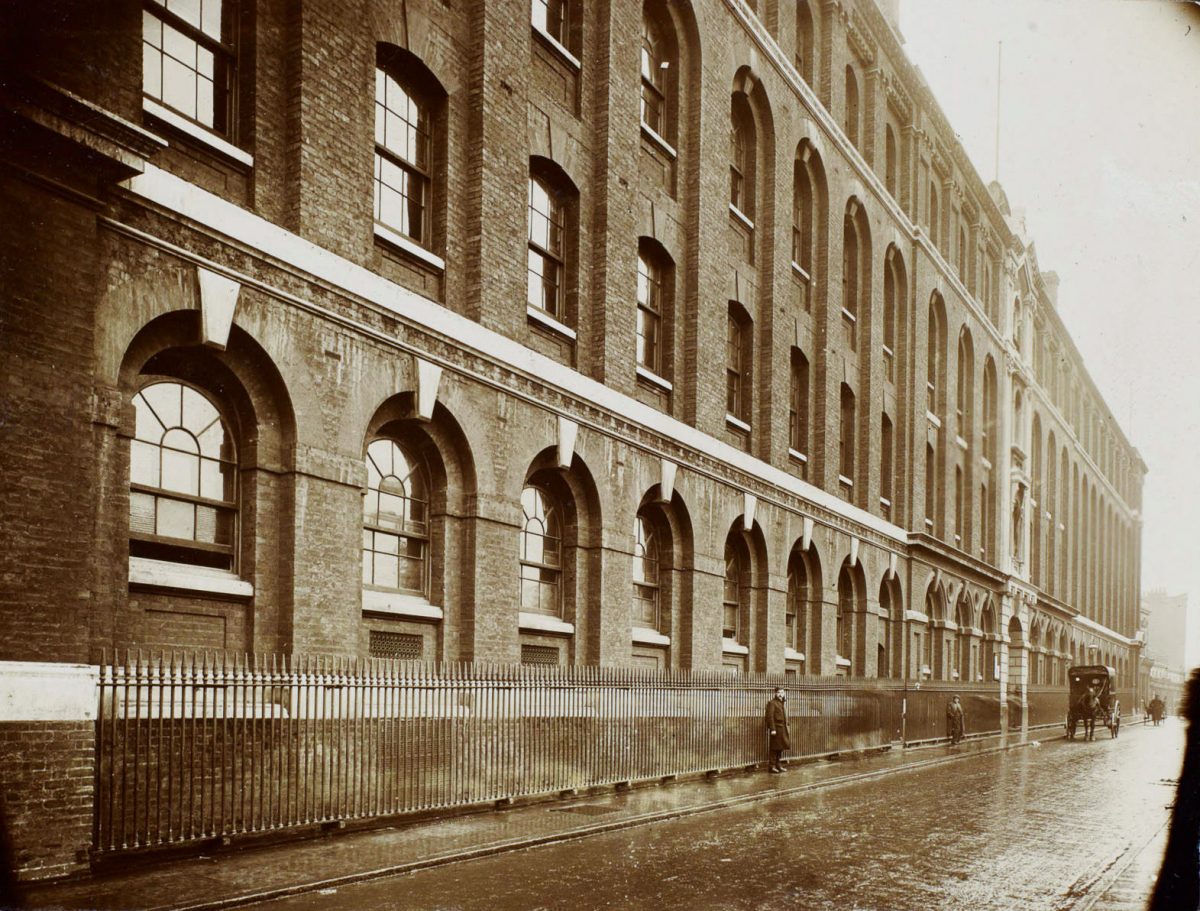 Whitechapel Infirmary -Wide view along the front of a long, four-story building with arched windows on the first floor. Two horse-drawn carriages are on the street in the distance. (original caption) 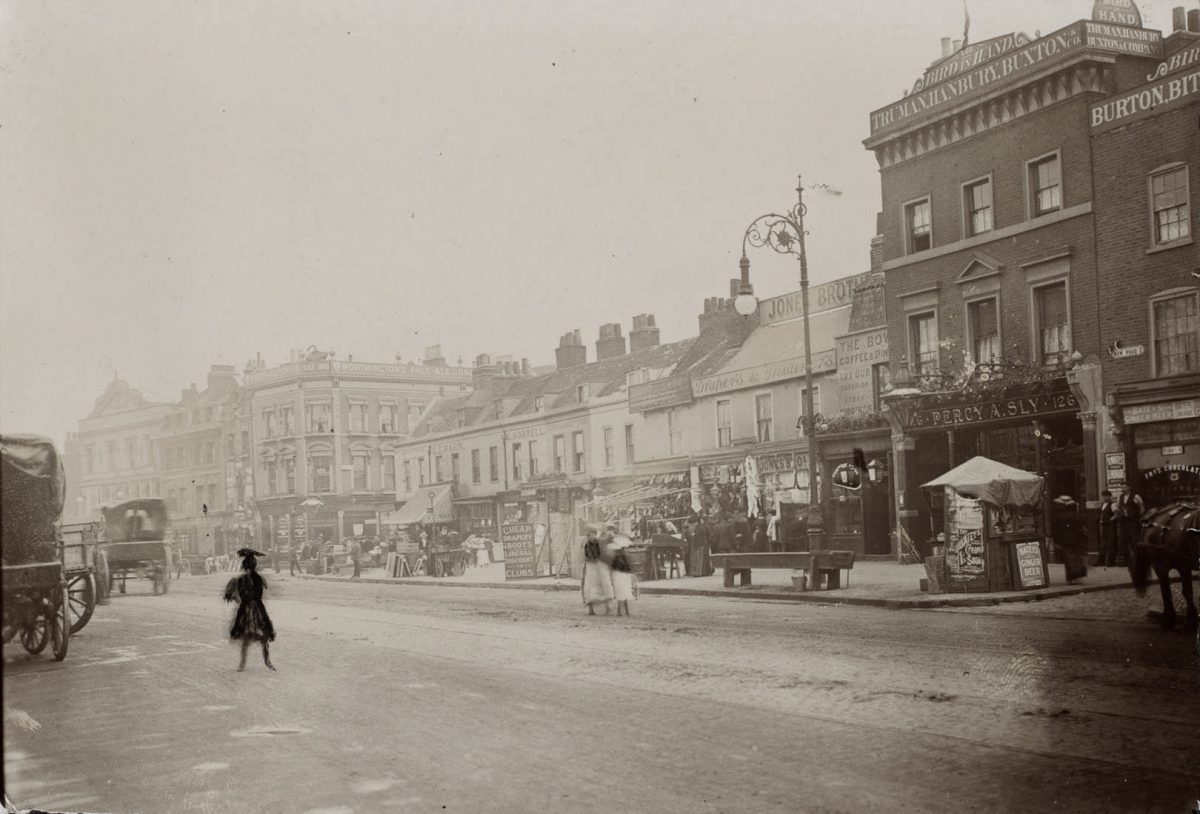 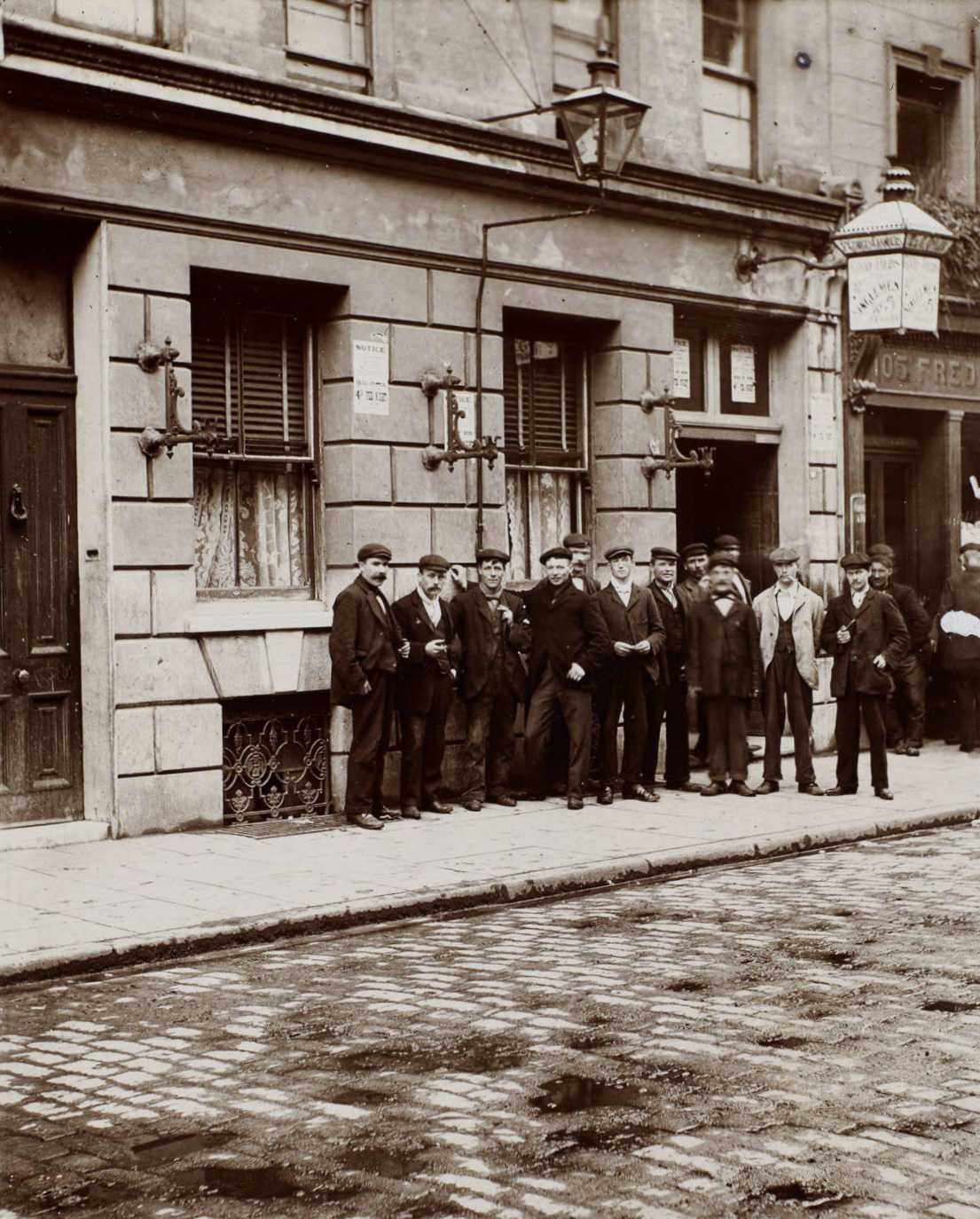 “Two relay system lodging, lodgers who have been on night work waiting till the beds of a doss house are vacated by men employed during the way.” – original caption 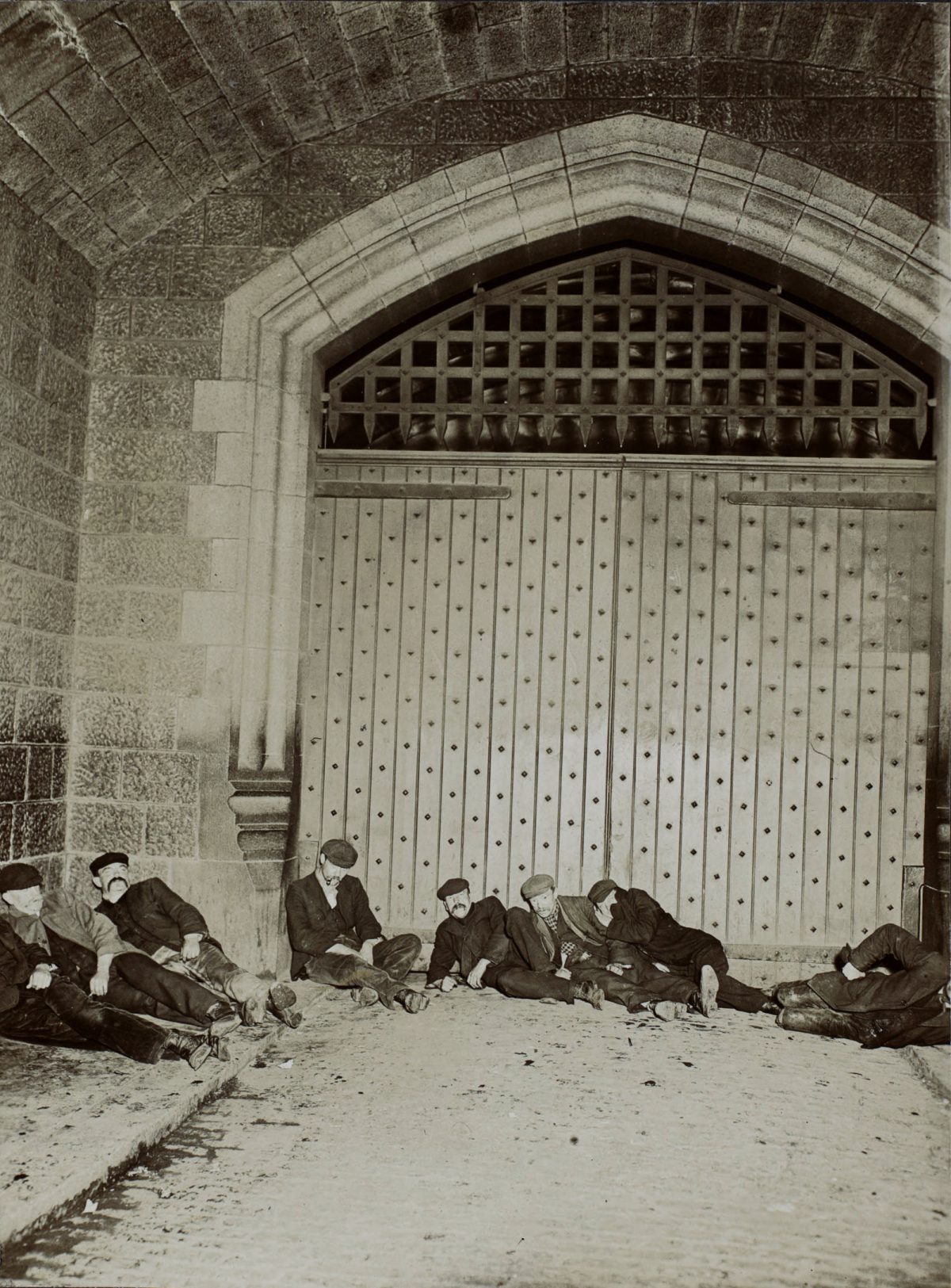 Under the arches of the bridges that span the Thames 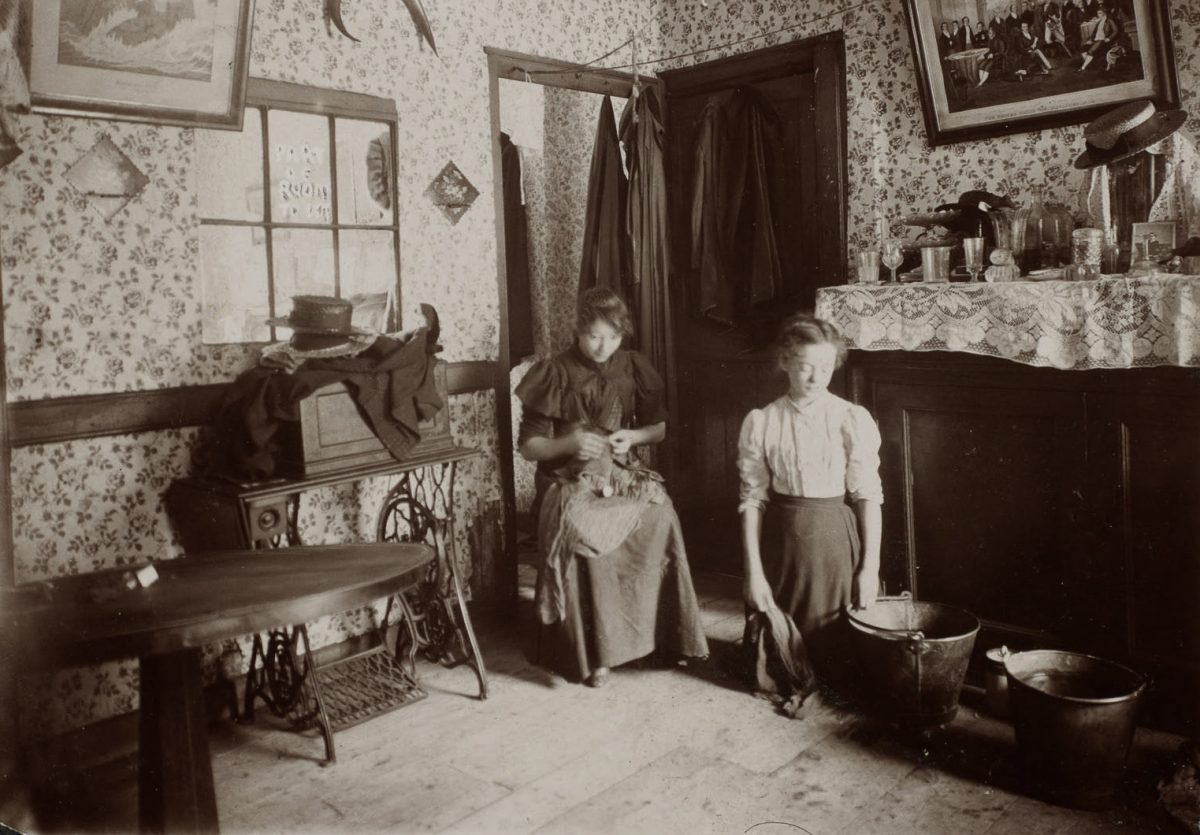 Part of a room to let. A typical East End home where the people live, sleep, eat all in one room. 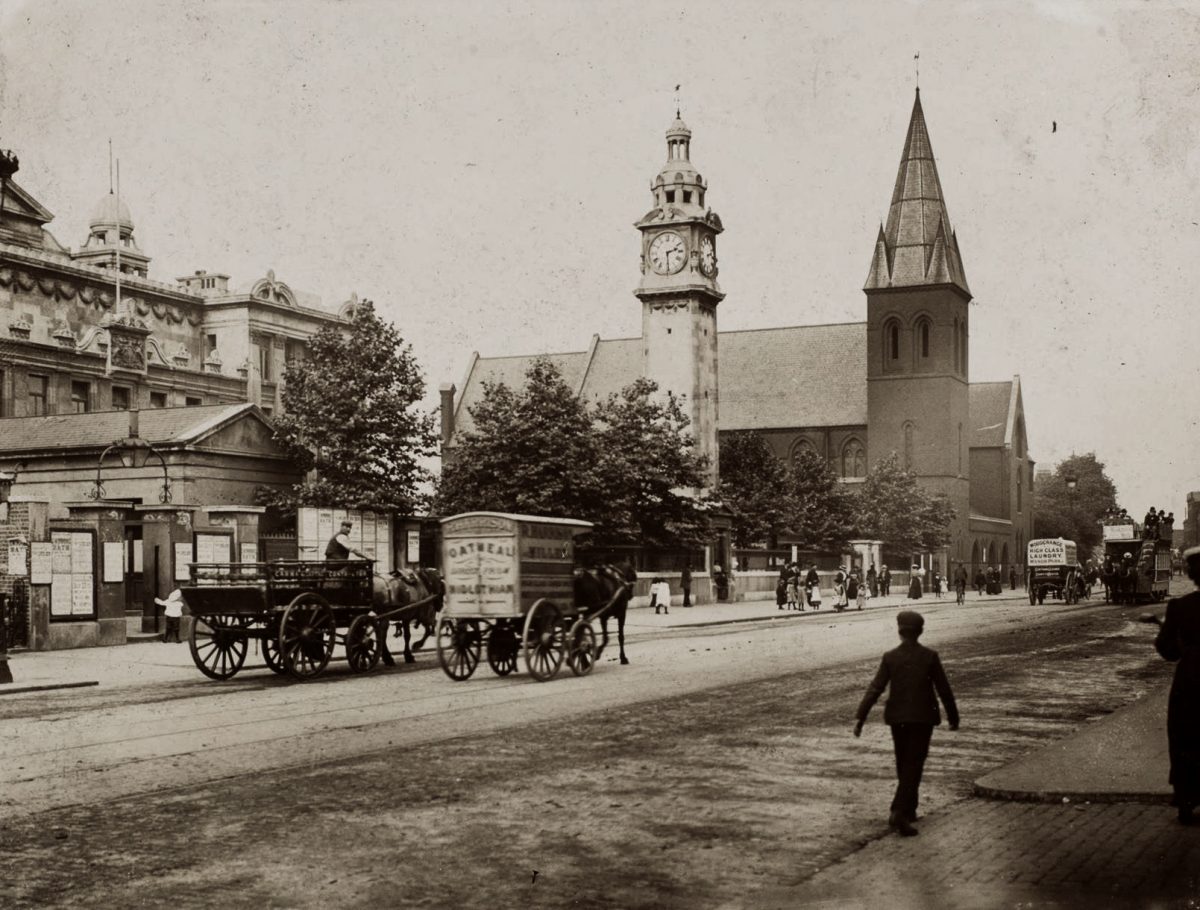 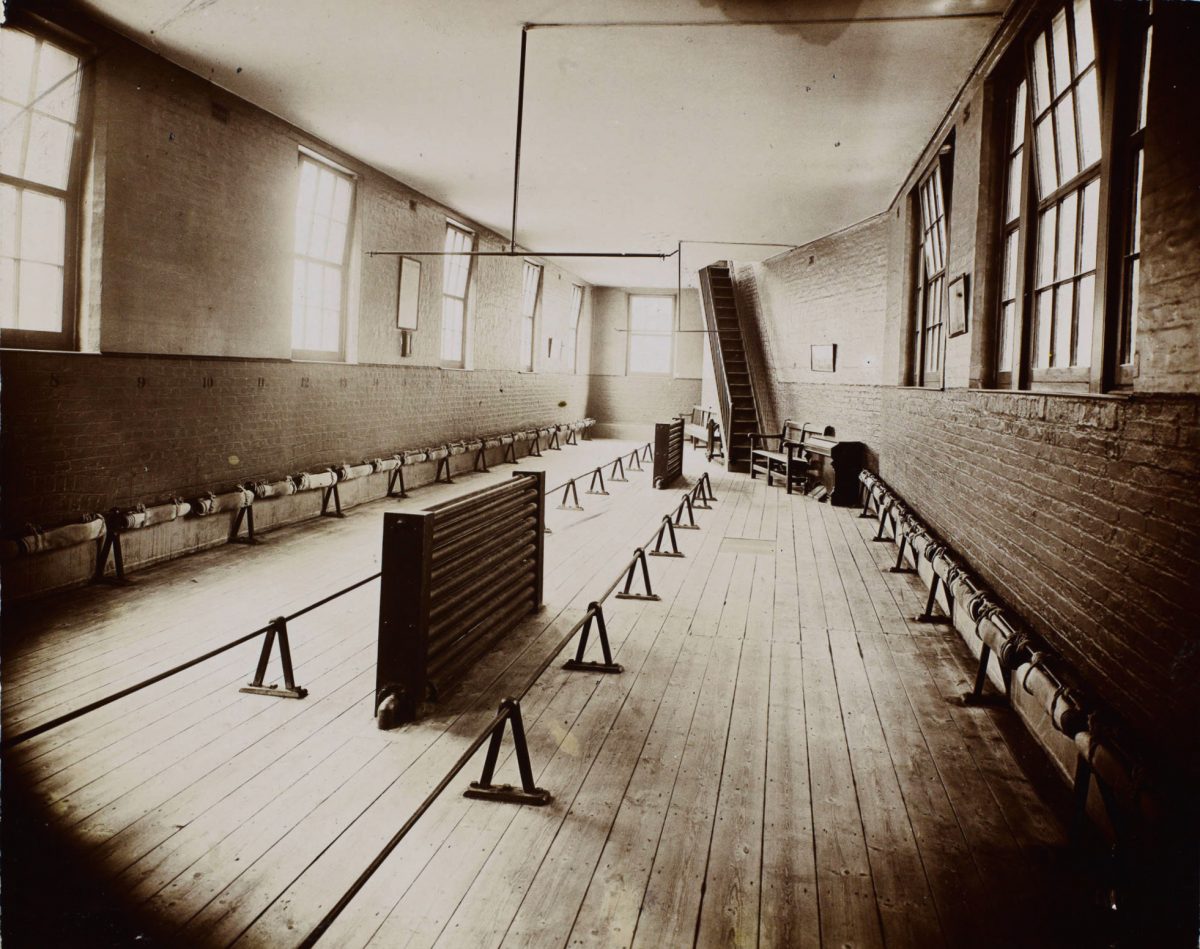 Casual ward of Whitechapel Workhouse above, beds rolled up on left and right 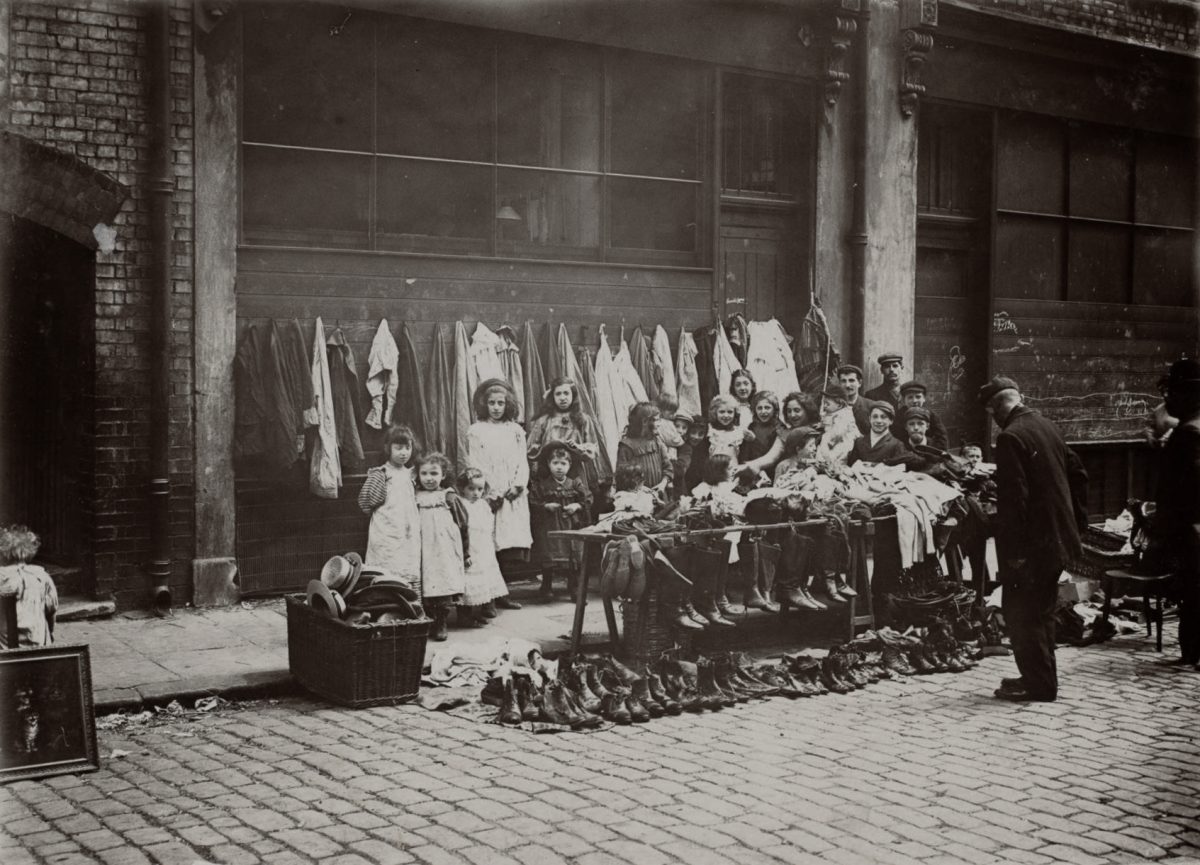 A shop where old clothes are sold – A group of children and a handful of adults, stand around a table that is covered with clothing. Jackets and coats are hung on an outside wall behind them, and shoes, hats, and other items sit on the ground around the table.(original caption) 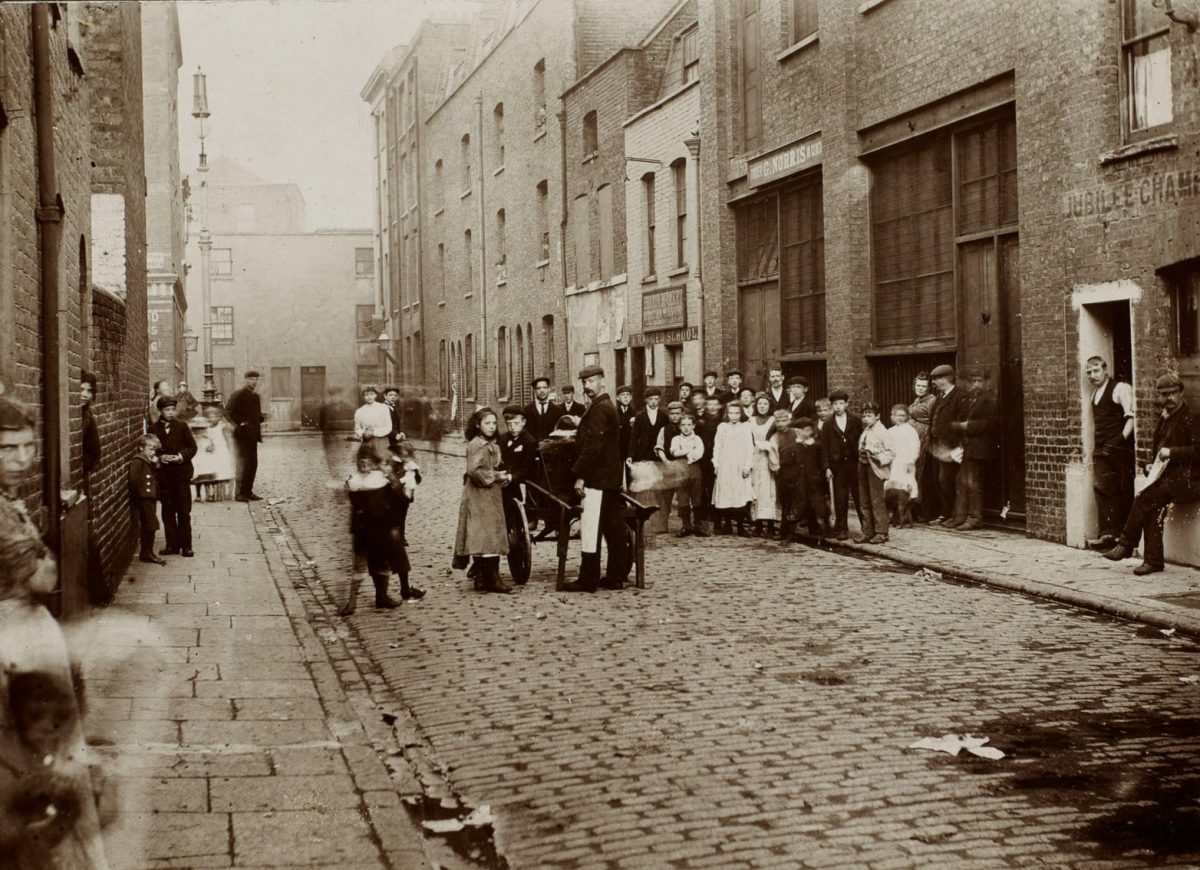 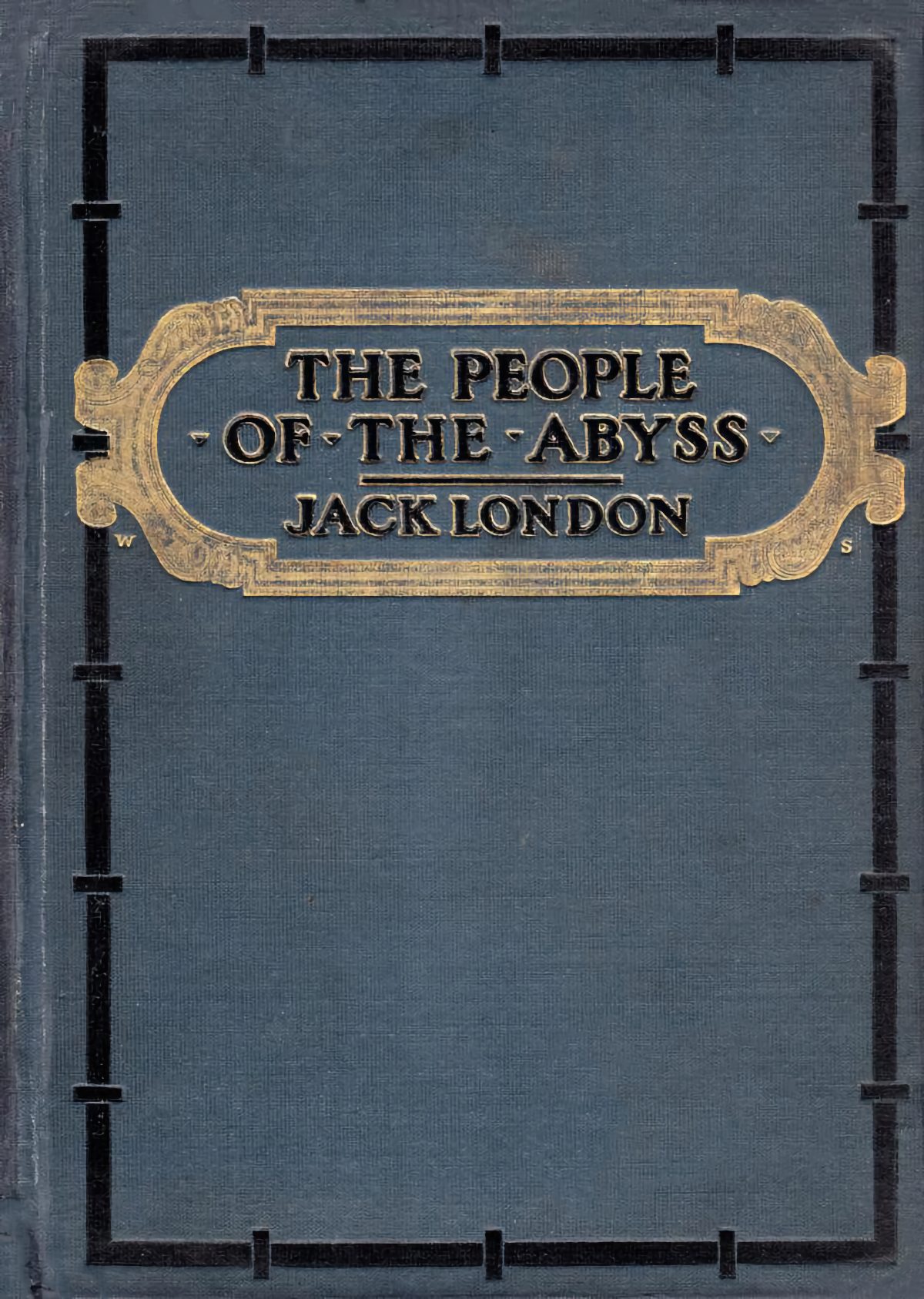 People of the Abyss cover

Buy fine art prints of these incredible photographs in the Flashbak Shop.

Jack London’s photographs are via The Huntington Library.