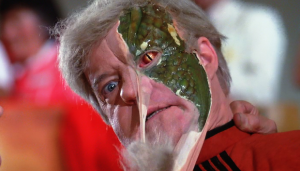 ARTHUR C. Clarke once wrote that “two possibilities exist: either we are alone in the Universe, or we are not. Both are equally terrifying.”

In terms of television programming, however, the idea of alien life existing in the universe has far and away proven the more dramatic and oft-depicted “terror.”

Accordingly, alien invasions of planet Earth have been a staple of TV for half-a-century.

In America, David Vincent (Roy Thinnes) battled Quinn Martin’s “Invaders” in the late 1960s for two seasons, for example.  And in the UK, the Doctor in all his Time Lord incarnations has stymied invasions from Daleks, Cybermen, Kraal, Sycorax, and other species for fifty years. 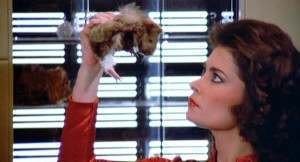 But some televised alien invasions have proven been far more gruesome or horrifying affairs than others.

In other words, some aliens come to Earth not merely to steal our land or water resources, but, in some circumstances, to actually use…us.

As it turns out in these Darwinian imaginings, the human race is the ultimate resource.

The idea of aliens utilizing human beings as “resources” to be exploited is a pretty terrifying one indeed, and the aliens featured in the episodes and series enumerated below have used and abused our unlucky race in all sorts of dreadful ways: as “suits,” as incubators, as food, and — in the grisliest case — as a narcotic.

Let’s hope that if and when aliens descend in their chandelier mother-ships, their arrival and motives are nothing at all like the creepy and monstrous invasions depicted in the following five productions. 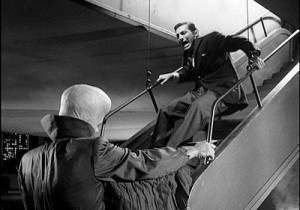 In this famous tale from the Rod Serling anthology, The Twilight Zone (1959 – 1964), alien Kanamits arrive on Earth promising an age of peace and prosperity.

These 9-foot tall aliens (all played by Richard Kiel) put an immediate end to war by giving mankind force-fields that protect entire nations.  They also share economical new power sources, and reveal a new technique for growing crops in even the most inhospitable terrain.

The problem is, however, that the Kanamits are really just fattening the herd. They see us not as rulers of the planet Earth, but as an “ingredient in their soup.”

A translator working for the United States government, Chambers (Lloyd Bochner) learns the Kanamit secret the hard way after his assistant deciphers the text of a Kanamit book called “To Serve Man.”

“To Serve Man” is so terrifying, in part, because the alien invasion doesn’t seem like an invasion at all.  The Kanamits pass a lie detector test (!), and help man cease his warring and suffering.  It’s not until thousands of humans have been shipped off to the Kanamit home planet — ostensibly to go shopping and see alien baseball games — that the horrible truth is revealed.

The episode ends with Chambers locked away aboard a Kanamit spaceship and being fattened up for the soon-to-come slaughter. The finale’s implication is that all mankind shall soon follow in his footsteps to this dark fate…as the flavor of the day in the Kanamit buffet. 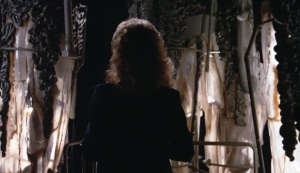 In Kenneth Johnson’s science fiction version of Sinclair Lewis’s It Can’t Happen Here (1935), alien fascists come to Earth promising that “friendship is universal,” but instituting a repressive totalitarian regime. They scapegoat an “international conspiracy of scientists,” and begin converting — brainwashing — politicians to their cause.

That’s bad enough, as alien invasions go, but these human-appearing Visitors are also stealing the Earth’s water supply, and harvesting people to take back to their planet…as food.  Turns out they are actually carnivorous reptiles.

But what makes the Visitors even worse and more horrifying even than their spiritual TV ancestors, the Kanamits, is the fact that many of the humans they have abducted from Earth have been vacu-packed in large-scale freezer bags for another malevolent purpose.

As Martin (Frank Ashmore), a friendly Visitor reveals to cameraman Mike Donovan (Marc Singer), these captured human beings are to be thawed out on an alien planet to serve as “cannon fodder” in the Leader’s wars of aggression against other species.

So just imagine it: you’re at home on Earth living your life one moment, then dragged away by these reptilian aliens and fast frozen the next.  Sometime later, you awaken, dazed, to find yourself on the front line of an alien war, having no idea how you reached the battlefield, or even who your enemy is.

And, then, you almost certainly die horribly.

It’s either that, or the dinner plate… 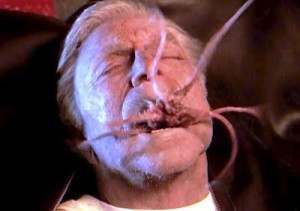 In this short-lived NBC series, a young and impressionable man, John Loengard (Eric Close), goes to Washington D.C. during the time of JFK and Camelot, only to learn that an alien hive-mind intelligence is secretly taking over the world’s governments.

These malevolent aliens are difficult to detect because they can physically join with humans.

To put it another way, the alien “ganglions” – which resemble wriggling spider-things — enter human beings through the mouth and then take over the brain. The aliens basically use the captured human bodies in a fashion similar to the m.o. of the parasites depicted in Robert A. Heinlein’s The Puppet Masters (1951).

Once implanted, human beings are merely “suits” that the aliens wear, or more appropriately, steeds for them to ride.  The affected humans are unable to think or act independently under this alien yoke, but possess some awareness of their nefarious activities.  So they know they are betraying their own kind.

In this case, the only thing worse than being implanted by an alien is being half-implanted. In the Dark Skies pilot episode, “Awakening,” directed by Tobe Hooper, we see what happens to a man whose bungled implantation turns him into a kind of hideous, milky-eyed mutation. It’s not a pretty sight. 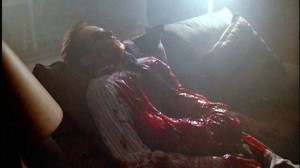 When The X-Files returned for its sixth season (and began shooting in L.A.), the Chris Carter series also provided a new clue regarding its conspiracy puzzle.

In particular, “The Beginning” reveals that the alien invaders hoping to colonize Earth in 2012 actually have an ulterior motive.  They aren’t just planning to use the human race as slaves, as some collaborators like the Cigarette-Smoking Man (William Davis) have always surmised.

On the contrary, as “The Beginning” reveals, the aliens hoped to use our bodies as living incubators.

We learn in this episode that exposure to a deadly virus (delivered by bee sting) liquefies human organs, turning them into juicy nutrients for a gestating grey alien to devour.

In the course of the episode, we see this biological process run its course, leaving behind a hollowed-out human corpse.

As one might guess, this new information does not please the Syndicate, the group of conspirators who have been paving the way for alien colonization.  They had no idea that their people would not be spared alien subjugation, but rather consumed as…baby food. 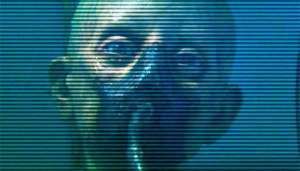 Over the years, we have witnessed alien invaders eating cute little hamsters (V) and gestating inside living human bodies (The X-Files), but no gruesome vision could have prepared audiences for the visceral horrors of Torchwood’s third season, called “Children of Earth.”

In this story, an alien race known as the 456 comes to Earth, following an earlier visit in the mid-1960s.  These aliens quickly demand that ten percent of the Earth’s children be handed over to them at once, lest the human race be annihilated.

Even this “small” percentage of children represents a figure in the millions.

Children, it seems, produce a chemical that acts like a recreational drug in the alien’s biological system.

Thus the children of the Earth who will heroically save their mother planet from destruction will spend their days withering away with alien junkies for company, their bodies being sucked dry as, essentially, a disposable narcotic.

There is a brief view in the series of a human child who has been with the 456 for a long time, and the imagery is unforgettable and horrific.  The child barely seems human anymore.  It is a desiccated, wrinkled, used-up thing.

Taking our land, water, or lives is one thing… but stealing our children and using them in this awful fashion?

It’s the worst thing an alien could do, and thus Children of Earth is truly the stuff of nightmares. 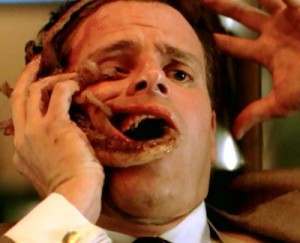 All the aforementioned TV invasions are horrifying (and gruesome), and each puts the human race at risk in ways ghoulish and macabre.

I’ll close this list with Stephen Hawking’s words of warning about extra-terrestrials:

“If aliens ever visit us,” he writes “I think the outcome would be much as when Christopher Columbus first landed in America, which didn’t out very well for the Native Americans…” 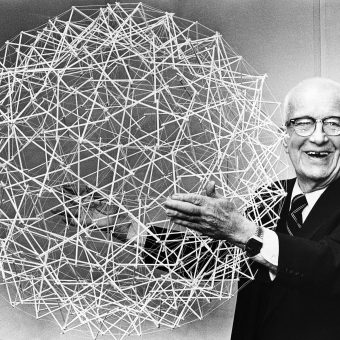