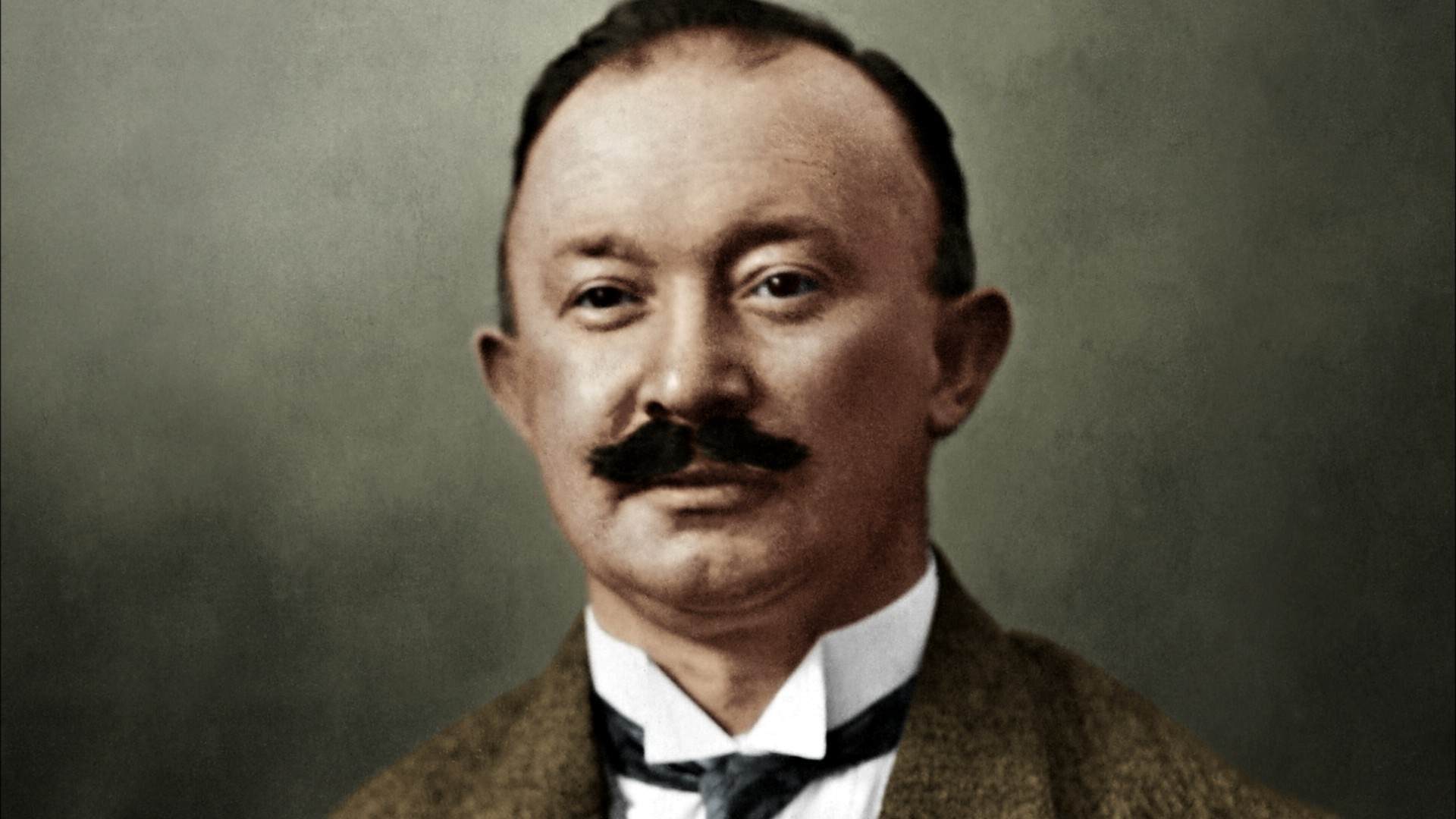 Hugo Boss the man who helped dress the Nazi party.

On 8th July 1895 Hugo Ferdinand Boss was born. Famously, he was of course the man who started the multi-billion dollar international fashion business that today carries his name. Infamously, also of course, he also had very close connections with Germany’s National Socialist Party both before and during World War 2.

His parents had owned a small lingerie and linen shop in the Swabian town of Metzingen. Hugo himself opened his own clothing business in 1924. Just a few years later one of his major commissions, via a larger clothing company, included making some brown shirts for the National Socialist Party. Hugo Boss later started to advertise his company as a “supplier of Party equipment since 1924.” Although this was a lie and was closer to 1928.

In 1931 Boss became a member of the ‘Party’ which wasn’t unhelpful in enabling him to gain orders to make Nazi uniforms. By World War II clothing for the German armed forces became the vast majority of the company’s business. Incidentally, as late as 1945 Hugo Boss was still making uniforms for the Waffen-SS.

During this war Hugo Boss employed forced labourers, most of whom were housed in the company’s own camp until 1943. In April 1945 Metzingen became part of the French occupation zone and Hugo F. Boss was ‘de-nazified’, classified as ‘incriminated’, and fined 100,000 reichsmarks. The early membership of the National Socialist Party and the fact that he had profited from National Socialism meant it was a particularly heavy fine. He was also banned from running any business and Hugo Boss, the company, was now run by Hugo’s son-in-law Eugen Holy.

In 1948 Hugo F Boss died of complications from a tooth abscess. The company continued trading and were still making uniforms, although now for the French occupying forces and the Red Cross. Hugo Boss started selling men’s suits in the 1950s and in 1969 the brothers Jochen and Uwe Holy took over the company. It was the beginning of the multi-billion dollar International Fashion Group that we know today.

Hugo Boss was a German company trading in the time of Hitler so it’s not unbelievably surprising that it made money working with the Nazi party. Many German household names of today were also closely tied to the Nazis, including Volkswagen, BMW, Audi and Bayer. For instance a report, commissioned by Audi, found that Auto Union (Audi’s predecessor) had ‘moral responsibility’ for the deaths of 4,500 slaves imprisoned in the Flossenburg concentration camp in Bavaria. The company also reportedly built seven forced labour camps run by SS soldiers. Auto Union employed 3,700 slaves from these camps of which a quarter were imprisoned Jews. 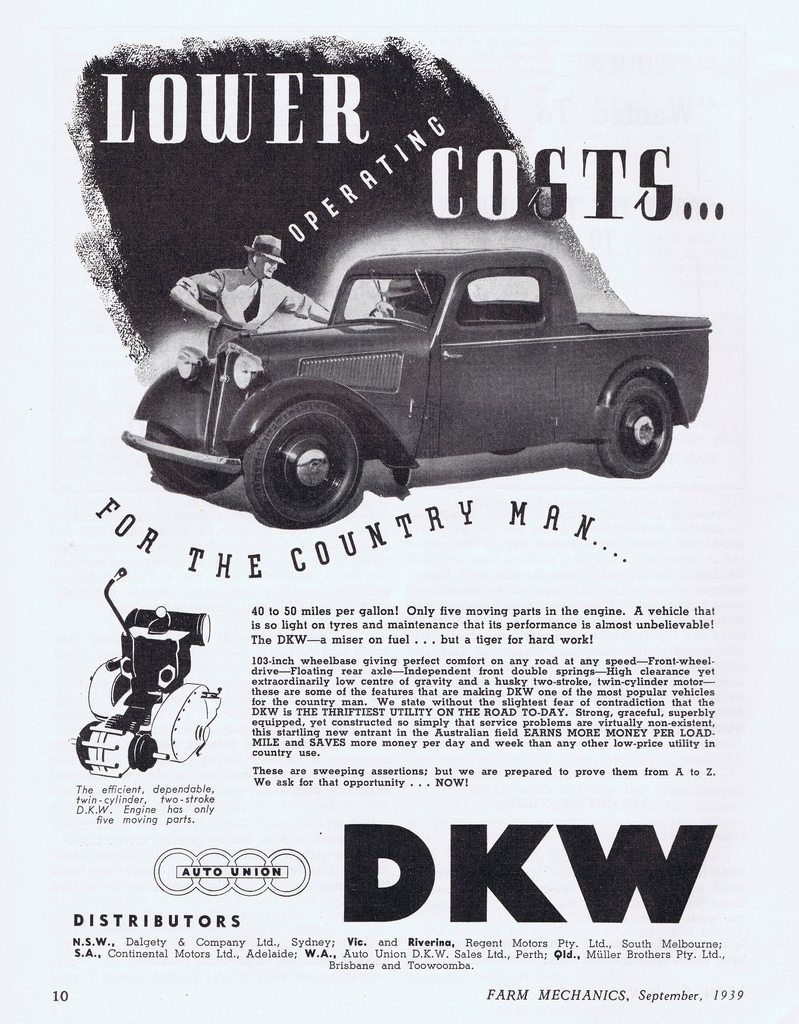 An Australian ad for an Auto Union (Audi) car from 1939. They were surprisingly cheap, but then they were built by slave labour. 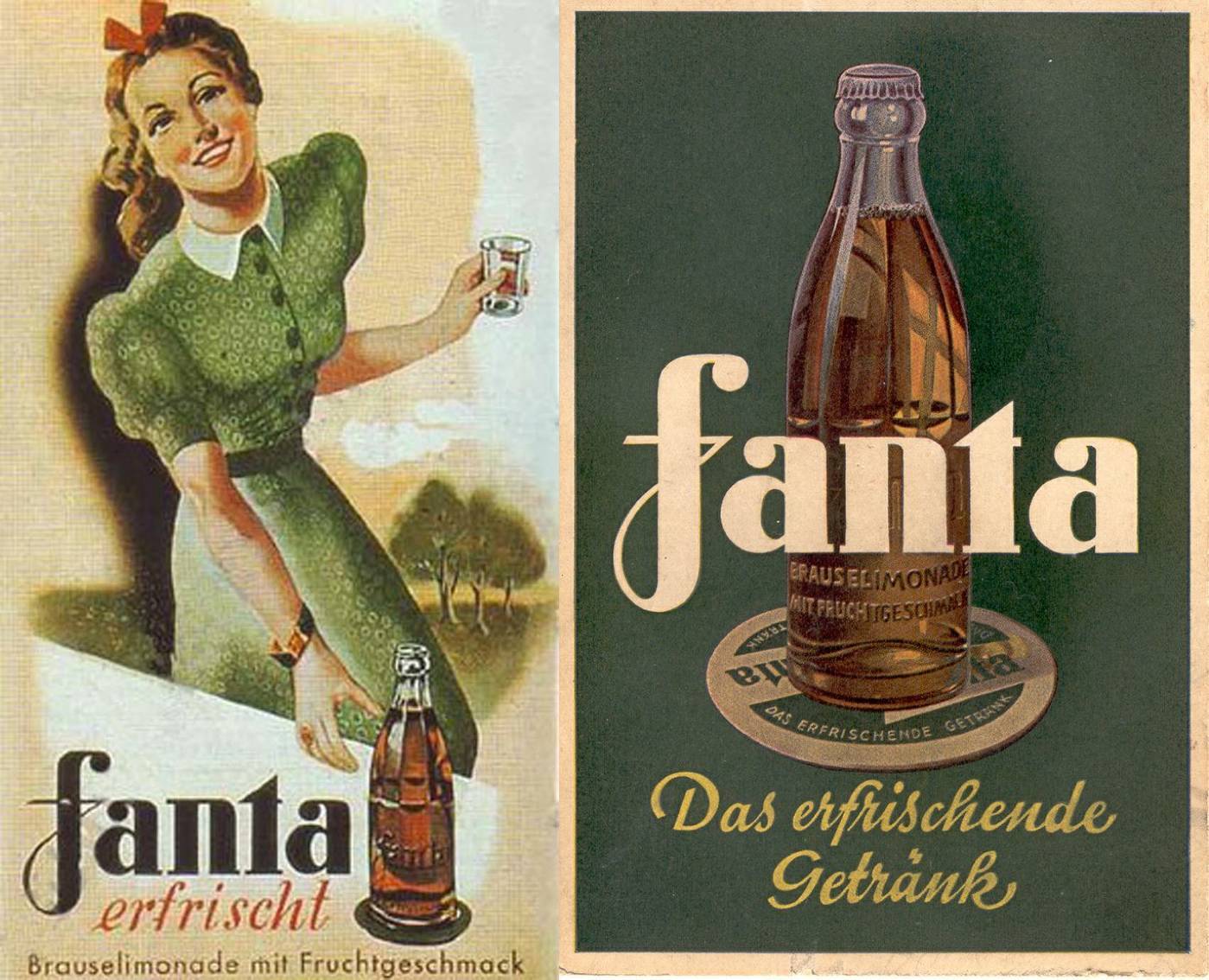 Fanta, the drink owned by Coca-Cola and invented in Nazi Germany.

In 1938 Coca-Cola ran 43 bottling plants in Nazi Germany although they actually had a presence in Germany since 1929 when an American ex-patriate called Ray Powers started bottling Coca-Cola. During these first four years in business, Coca Cola sales went from under 6,000 cases to over 100,000 in 1933 – the year Hitler became Chancellor.

By now a German man called Max Keith (pronounced ‘Kite’) started working for the German subsidiary of Coca-Cola and after Power’s died the president of Coca Cola, Robert Winship Woodruff, gave Keith full control of bottling. In 1936 Keith supplied the athletes and visitors to the 1936 Berlin Olympics for which Robert Woodruff was an honoured guest. At the beginning of WW2, Germany was Coca Cola’s second biggest market where an incredible four million cases of the beverage being sold. 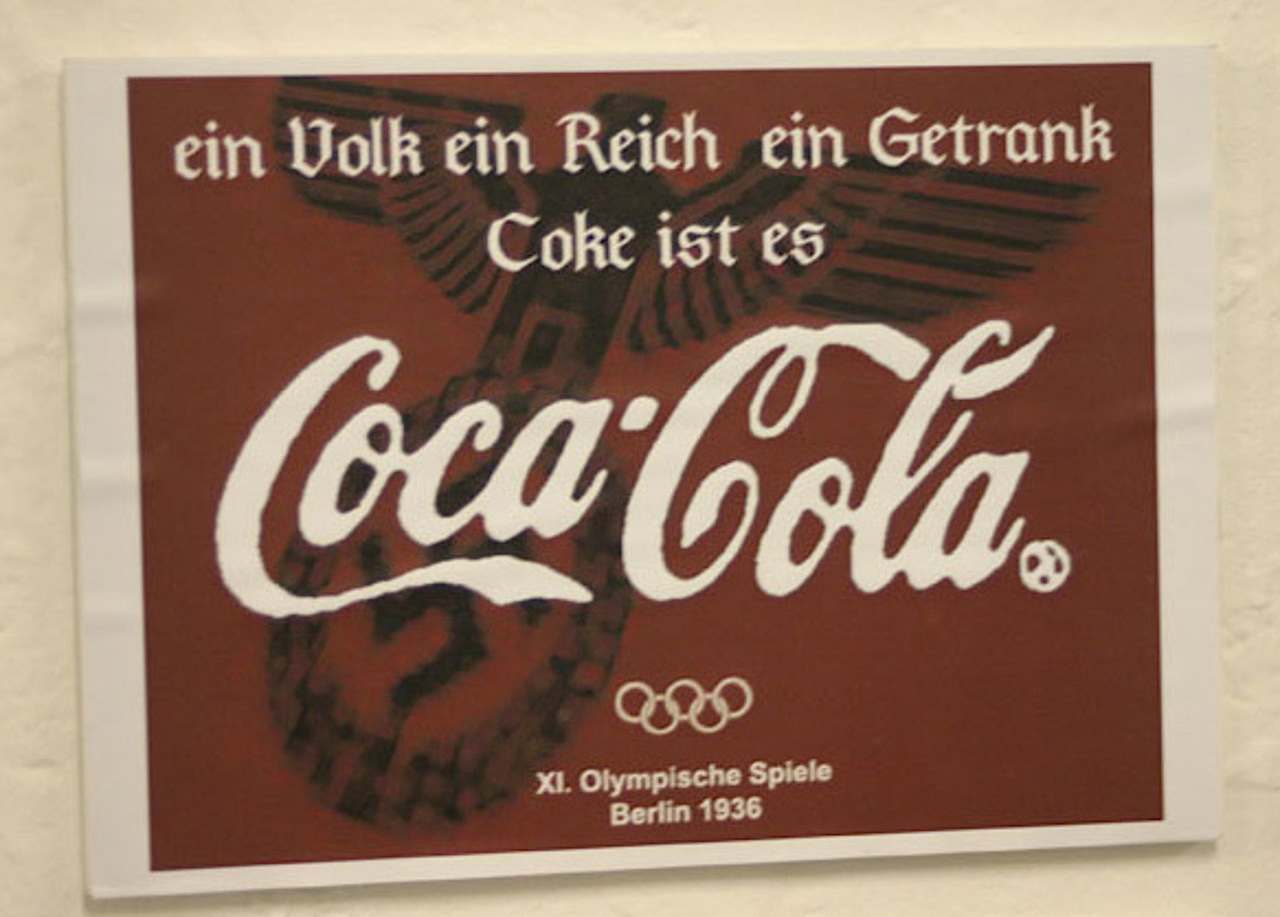 Coca Cola 1936 Olympics ad. It could be said that Coca-Cola were now going beyond just complicity with the Nazis but almost endorsing the regime.

In 1939 when the war broke out Max Keith was appointed to the Office of Enemy Property to supervise all soft drink plants in German but also in any captured countries. Keith took over the Coca-Cola businesses in Italy, France, Holland, Belgium and Norway. Soon, however, the supply of the secret ingredient of Coke called 7X and Merchandise #5 was cut off. Keith promptly invented the drink Fanta and it is still a brand of the Coca-Cola Company in wide circulation today; its origins directly related to Nazi Germany. 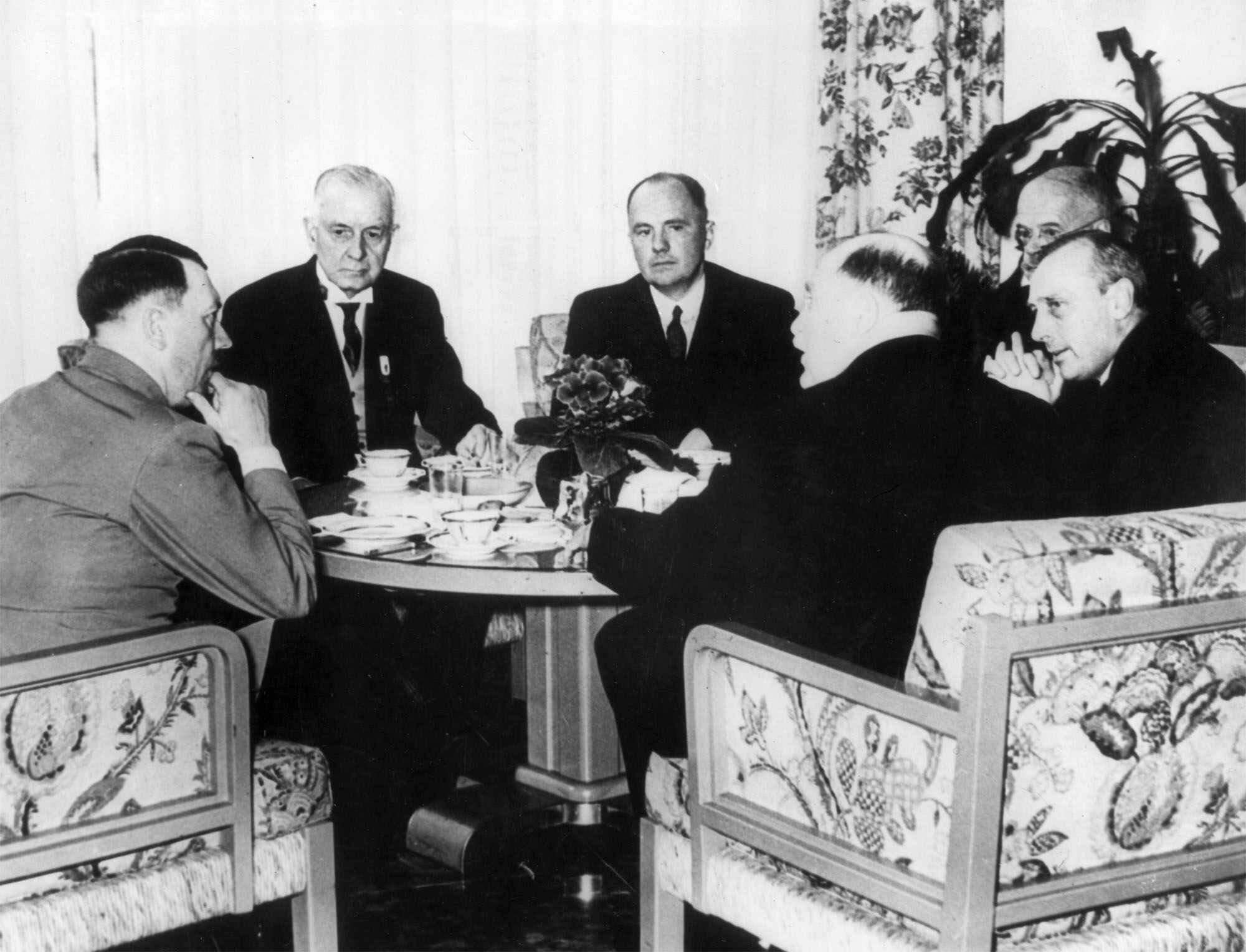 Thomas J. Watson, head of IBM meets with Adolf Hitler at The Reich Chancellory in Berlin, Germany, during the ninth congress of the ICC in this July 12, 1937 photo. 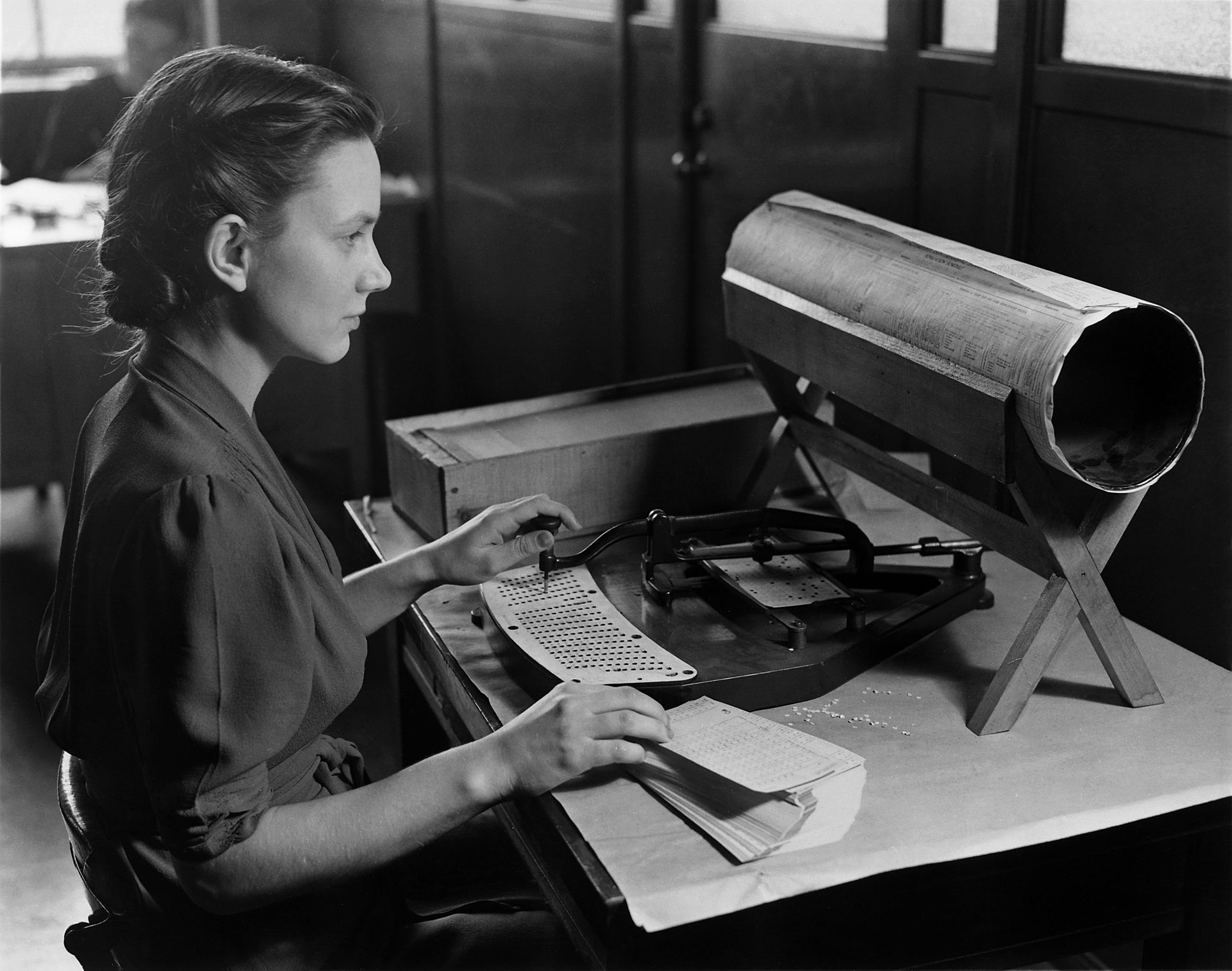 IBM with the direct involvement of its president Thomas J. Watson, had a business alliance with the Nazis from the beginning of the Hitler regime in 1933 and right through to the end of WW2. Initially, the work such as population census and identification (incredibly important to the Nazis for obvious reasons) were managed directly by IBM headquarters in New York but later through a subsidiary in Germany known as Deutsche Hollerith Machine Gesellschaft or DEHOMAG for short. According to Edwin Black, author of IBM and the Holocaust, the Hollerith Machines (named after the American Herman Hollerith who invented them) helped organise, identify and manage the social expulsion of Jews and other ‘undesirables’ but also, eventually, the confiscation of their property, their deportation, and, ultimately, even their extermination.

In September 1939 DEHOMAG’s general manager Hermann Rottke wrote to Watson in New York asking for equipment. Rottke wrote, “During your last visit in Berlin at the beginning of July, you made the kind offer to me that you might be willing to furnish the German company machines in order to shorten our long delivery terms…you will understand that under today’s conditions, a certain need has arisen for such machines, which we do not build in Germany…the alphabetic tabulating machines…” On September 28, IBM’s general manager in Geneva, J.W. Schotte, telephoned to confirm Watson’s permission for the new equipment. It was the day after Warsaw fell to Nazi Germany. During the war at nearly all of the concentration camps IBM maintained a Hollerith department to sort or process punch cards and track prisoners. Various prisoner types were given a separate IBM number, for instance 3 meant homosexual, 12 was Gypsy and 8 was the Jewish designation. Even when the prisoners died the cause was reduced to an IBM digit – 4 was execution, 5 meant suicide and code 6 was for “special treatment” in gas chambers. 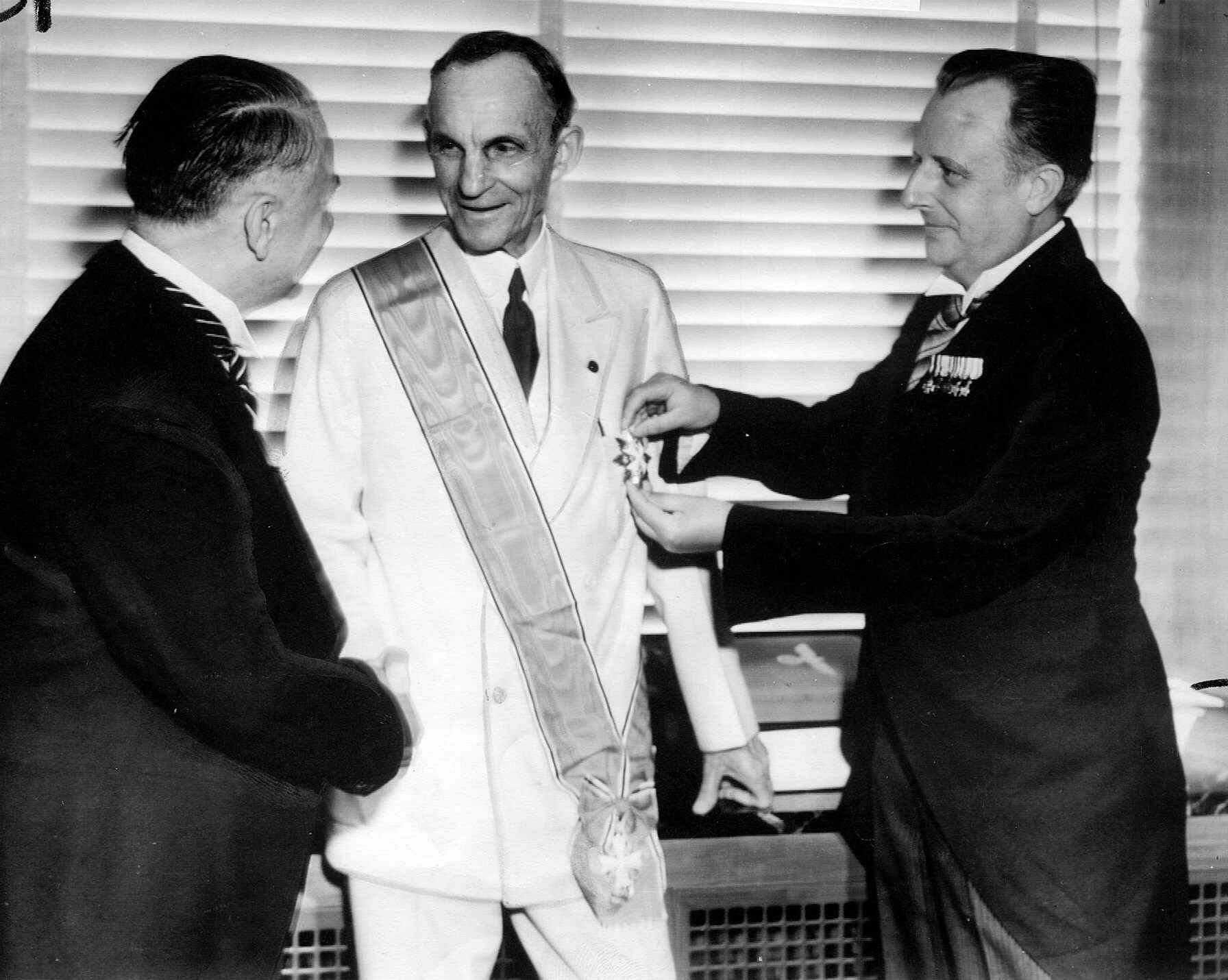 German diplomats award Henry Ford, center, Nazi Germany’s highest decoration for foreigners, The Grand Cross of the German Eagle, in Detroit for his service to the Third Reich. 1938.

Henry Ford was a rabid anti-semite, of that there is no doubt. In 1918 Ford bought his hometown newspaper The Dearborn Independent and used it to publish articles claiming there was a Jewish conspiracy to take over America. Hitler saw an historical equivalent between the Volkswagen, the so-called ‘people’s car’, and Ford’s Model T. In 1938 Ford accepted an award from the Nazi regime called the Grand Cross of the German Eagle. It was an award created the year before by Hitler and it was the highest honour that Nazi Germany could give to any foreigner. Incidentally, Henry Ford is the only American mentioned in Hitler’s book, Mein Kampf. 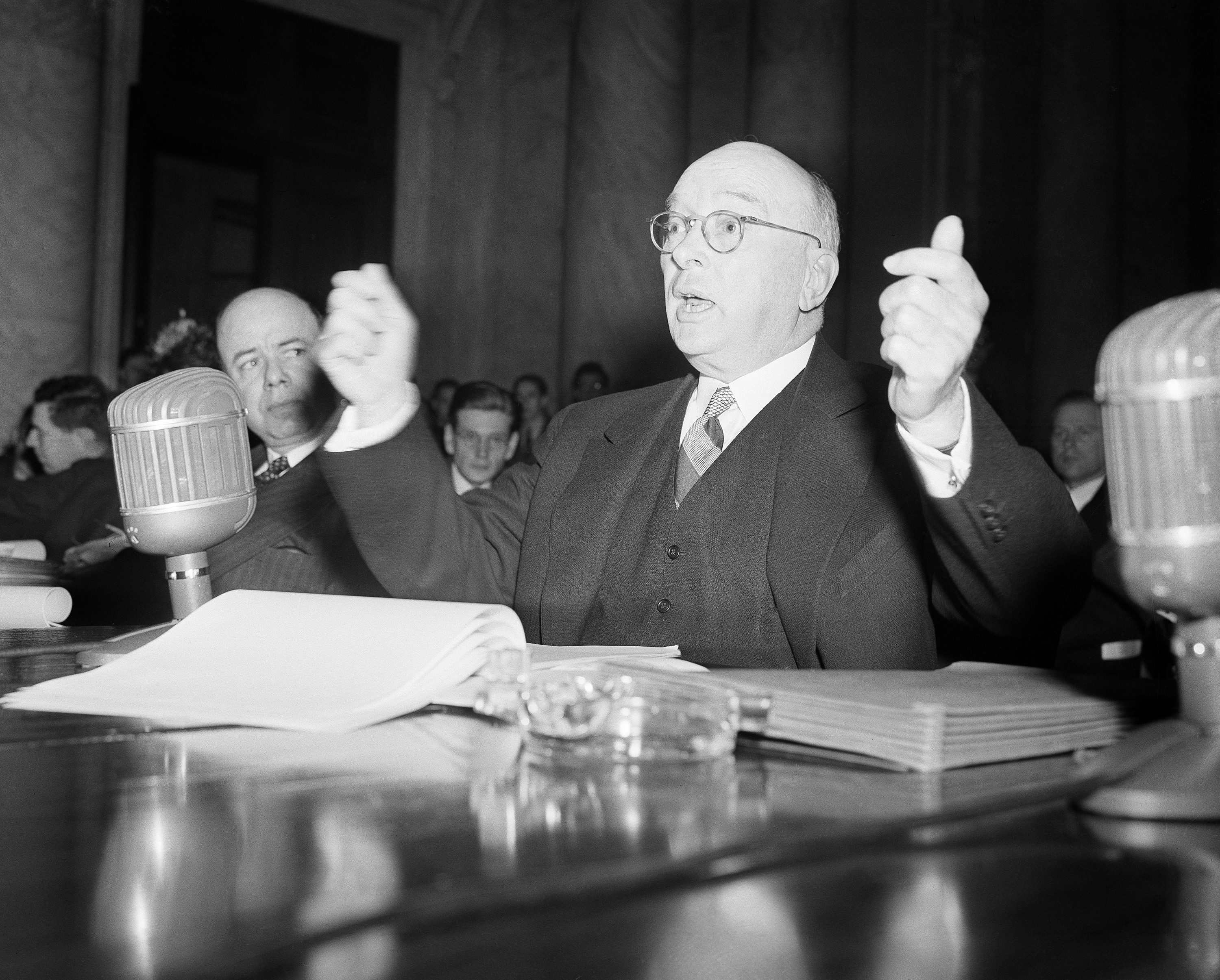 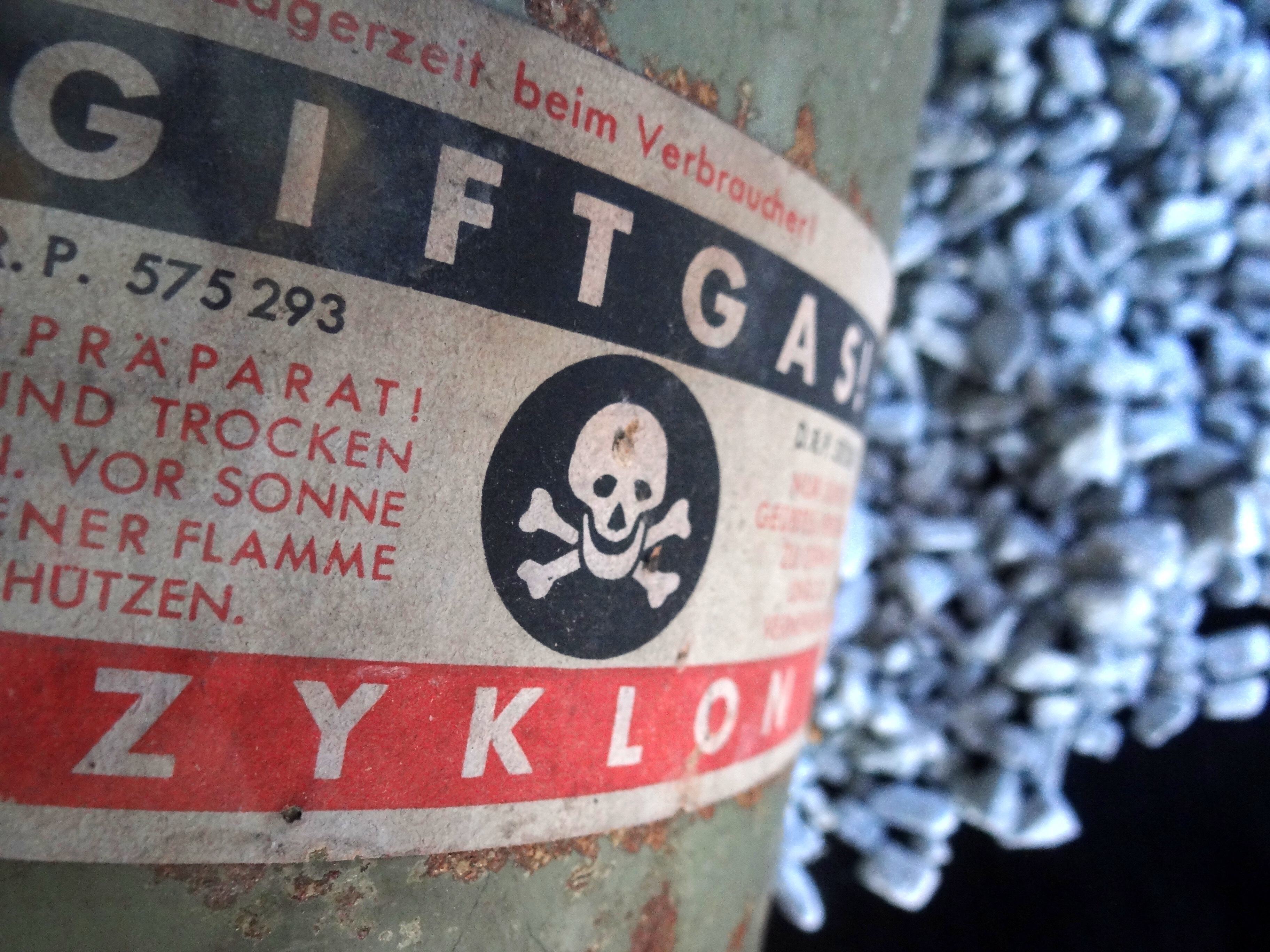 Zyklon B cannister. Zyklon B was made by IG Farben the 2nd largest stockholder of the Standard Oil of New Jersey Company. The two companies were completely interlinked.

The Standard Oil of New Jersey company was the largest oil company in the world at the beginning of WW2. It controlled 84% of the US petroleum market. The largest stockholder was the bank Chase owned by the Rockefellers, while the second largest stockholder was I.G. Farben, the massive German chemical company and at the time the largest in the world. I.G. Farben produced vaccines and drugs including aspirin and Novocain but also poison gases and rocket fuels. It was I.G. Farben that held the patent for the pesticide Zyklon B (used in the holocaust gas chambers) and owned over 40% of the shares of Degesch (Deutsche Gesellschaft fur Schadlingsbekampfung) which manufactured it. At Auschwitz, with almost unlimited slave labour, Farben built I.G. Auschwitz, a huge industrial complex designed to produce synthetic rubber and oil. This complex apparently used as much electricity as the entire city of Berlin and more than 25,000 camp inmates died during its construction.

Without Standard Oil the Luftwaffe would never have got off the ground. They needed Tetraethyl lead in their gasoline in order to fly. Only Du Pont, General Motors and Standard had the rights to it. In 1938 Walter C. Teagle, then president of Standard Oil, helped his friend Hermann Schmitz of I.G. Farben to acquire 500 tons of tetraethyl from a British Standard subsidiary. A year later, and just before the beginning of the war, Schmitz returned to London and “borrowed” an additional 15 million dollars worth of tertraetyl lead which was to be turned into aviation gasoline back in Germany. This meant that the Luftwaffe ended up bombing the country which had indirectly supplied the gasoline additive that enabled their planes to fly.

When the war began Britain was, unsurprisingly, furious about the ongoing US shipments of strategic materials to Nazi Germany. Standard Oil immediately changed the registration of their entire fleet to Panamanian to avoid British search or seizure. These ships carried oil to Tenerife in the Canary Islands where they refuelled and siphoned oil to German tankers for shipment to Hamburg.

Standard Oil of New Jersey is now Exxon Mobil Corp. One of, if not the, largest company on the planet. 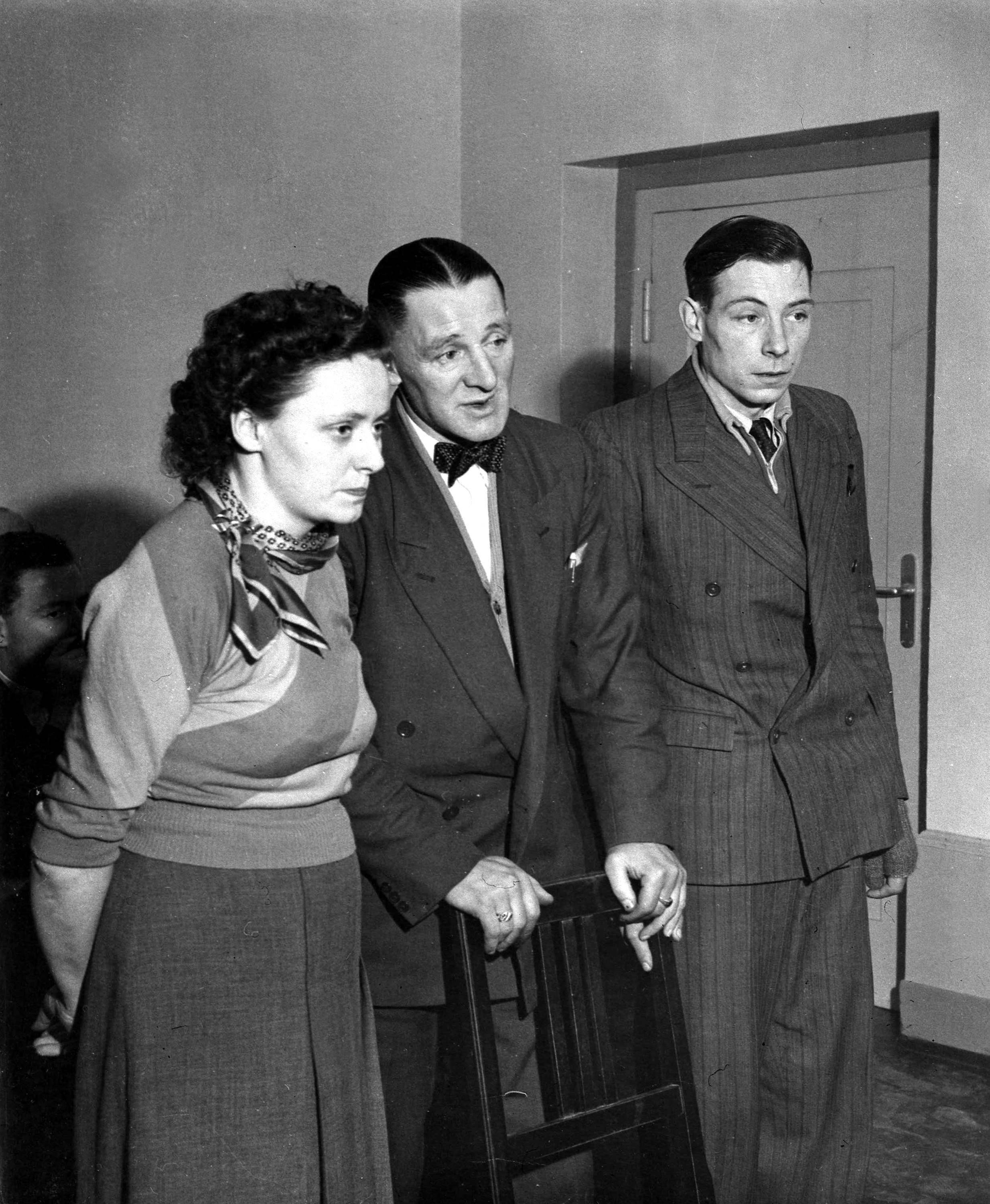 Robert William Ferris, right, and Charles Joseph Coward, centre, both Britons who were prisoners of war at Auschwitz, are seen with a language interpreter as the ‘slave labour’ lawsuit against German conglomerate IG Farben opens at a court in Frankfurt, Feb. 19, 1953. (AP Photo)