Same old boring Sunday morning
Old man’s out washing the car
Mum’s in the kitchen cooking Sunday dinner
Her best meal, moaning while it lasts
Johnny’s upstairs in his bedroom sitting in the dark
Annoying the neighbours with his punk rock electric guitar 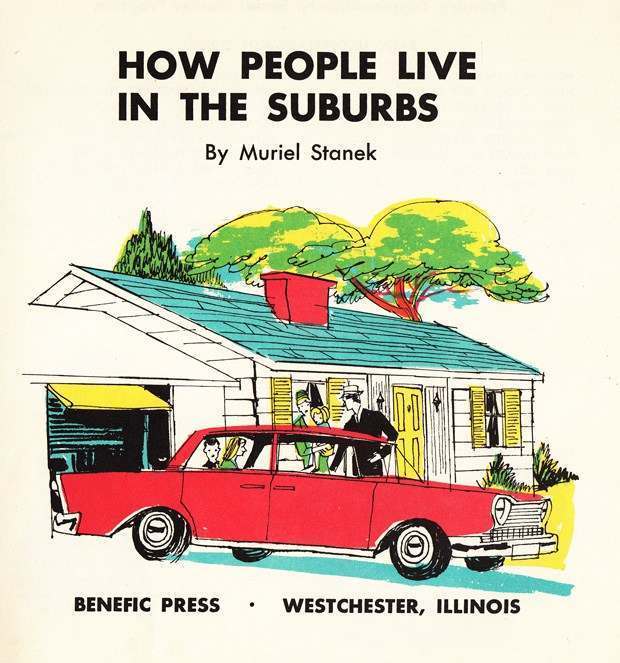 The suburbs, bland and banal Petri Dishes of bourgeois stability and non-event, where the normal people who go to work, pop to the shops and post letters in boxes exist. The glorious suburbs, where youth can dream of adventure without any need to worry where the next meal will come from, with space and time to muse on if they have the bottle to make it to the city or should wait until tomorrow, after another safe and secure night in the lounge in front of the telly and a supermarket meal. You can reinvent yourself and imagine anew over and over in the suburbs. And then there’s the “swinging”.

In 1970. Muriel Stanek created the book How People Live In The Suburbs

. The book was intended to educate US primary school children in social studies. Illustrated with Bernadine Bailey’s art and Philip Gendreau’s photographs, the book takes us back to the suburban dream of a life in a community of the ordinary. 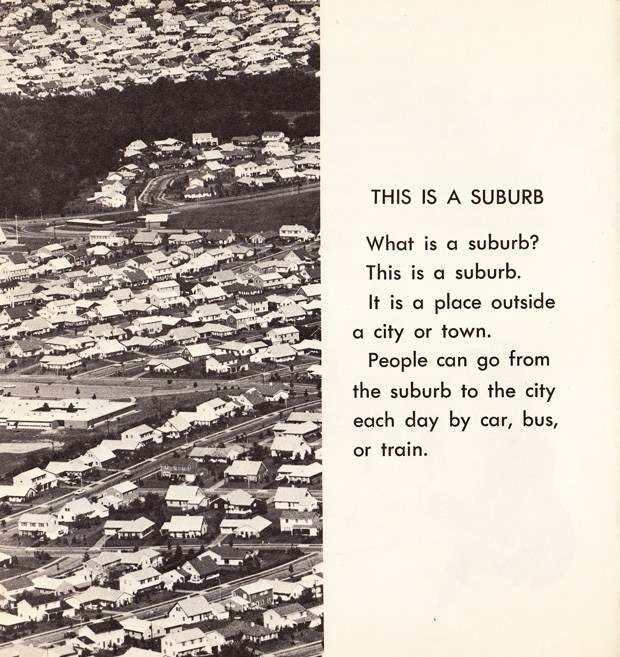 “The rain falls hard on a humdrum town. This town has dragged you down”
– The Smiths, William, it was really nothing 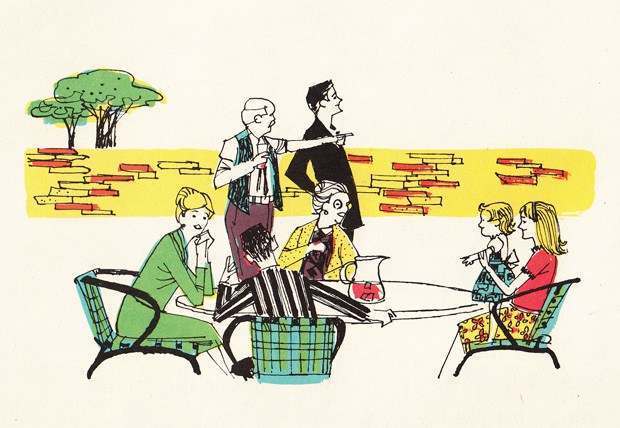 “I still had this idea that there was a whole world of marvelous golden people somewhere, as far ahead of me as the seniors at Rye when I was in the sixth grade; people who knew everything instinctively, who made their lives work out the way they wanted without even trying, who never had to make the best of a bad job because it never occurred to them to do anything less then perfectly the first time. Sort of heroic super-people, all of them beautiful and witty and calm and kind, and I always imagined that when I did find them I’d suddenly know that I Belonged among them, that I was one of them, that I’d been meant to be one of them all along, and everything in the meantime had been a mistake; and they’d know it too. I’d be like the ugly duckling among the swans.”
― Richard Yates, Revolutionary Road (1961) 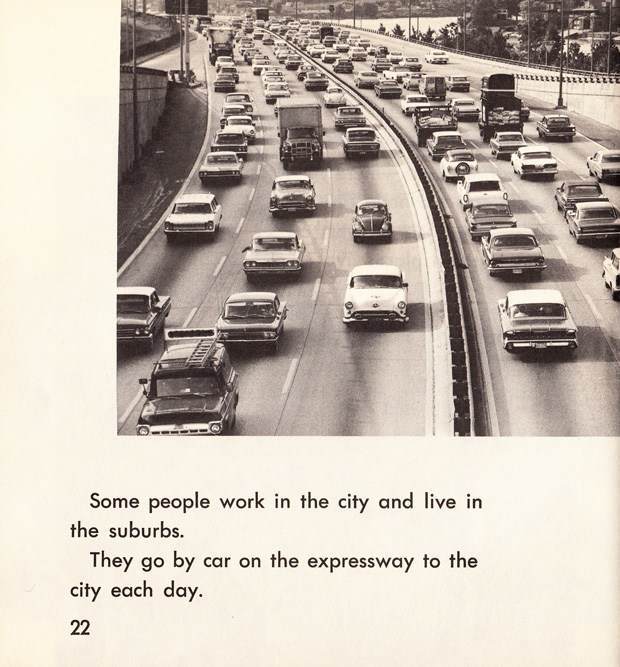 Come friendly bombs and fall on Slough!
It isn’t fit for humans now,
There isn’t grass to graze a cow.
Swarm over, Death!
– John Betjeman, Slough (1937) 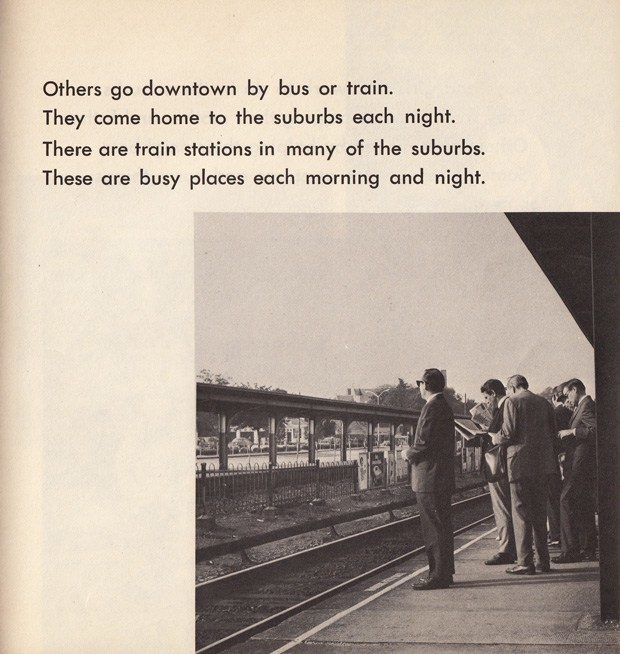 “A Francis Bacon, a John Bratby, and a photograph of CJ holding the lemon mousse which had won second prize in the convenience foods category at the 1963 Paris Concours Des Desserts” – Reginald Perrin muses on the three pictures on his boss’s wall as he makes the daily commute to his job at Sunshine Deserts. David Nobbs, The Fall and Rise of Reginald Perrin 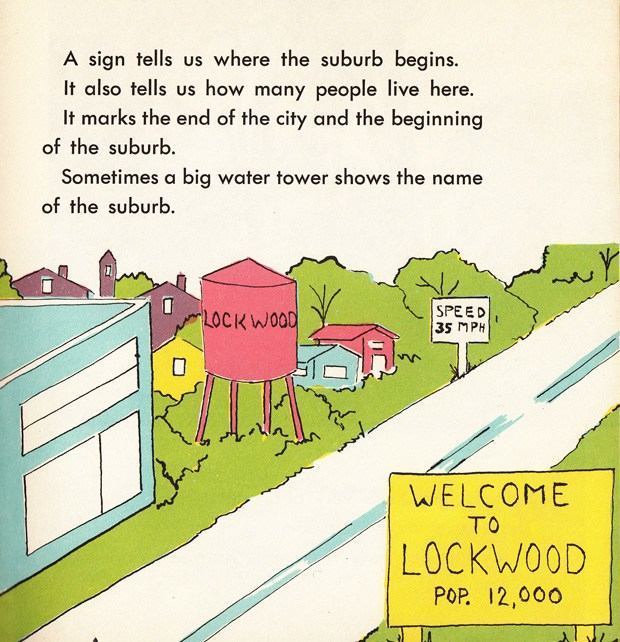 I’ll light the fire, you place the flowers in the vase that you bought today.
Staring at the fire for hours and hours while I listen to you
Play your love songs all night long for me, only for me.

Come to me now and rest your head for just five minutes, everything is good.
Such a cozy room,
The windows are illuminated by the evening sunshine through them,
Fiery gems for you, only for you.

Our house is a very, very, very fine house with two cats in the yard,
Life used to be so hard,
Now everything is easy ’cause of you and our …
– Crosby, Stills, Nash and Young – Our House 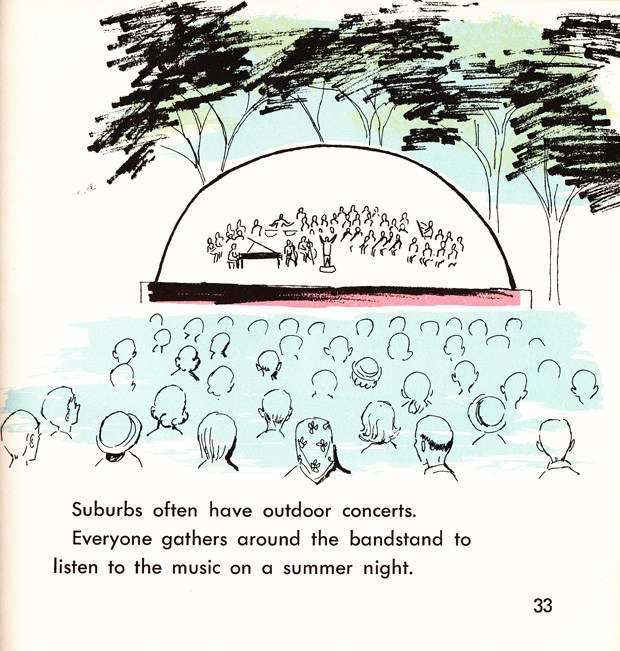 Now I leave them all in the never never land
The station seems so cold the ticket’s in my hand
My girl calls my name hi dave
Drop in, see around, come back
If you’re this way again”
Oh, I’m on my own
I’ve got a long way to go
I hope I make it on my own
– David Bowie – Can’t Help Thinking About Me (1965) 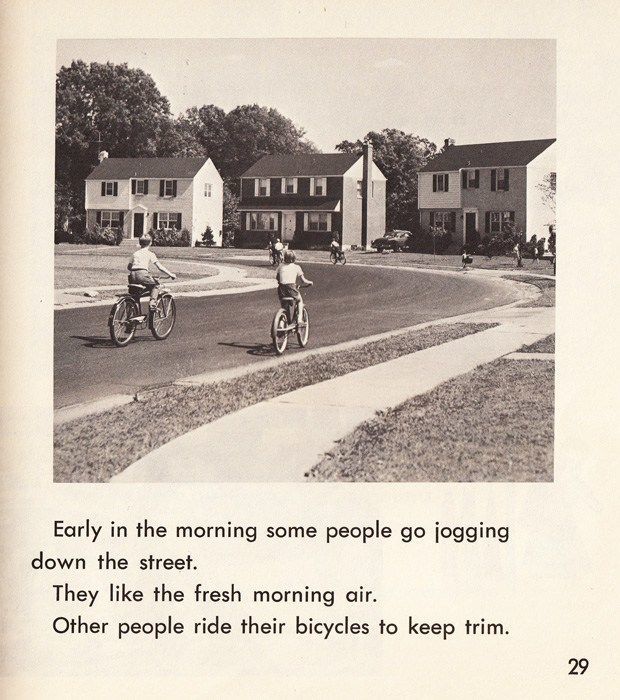 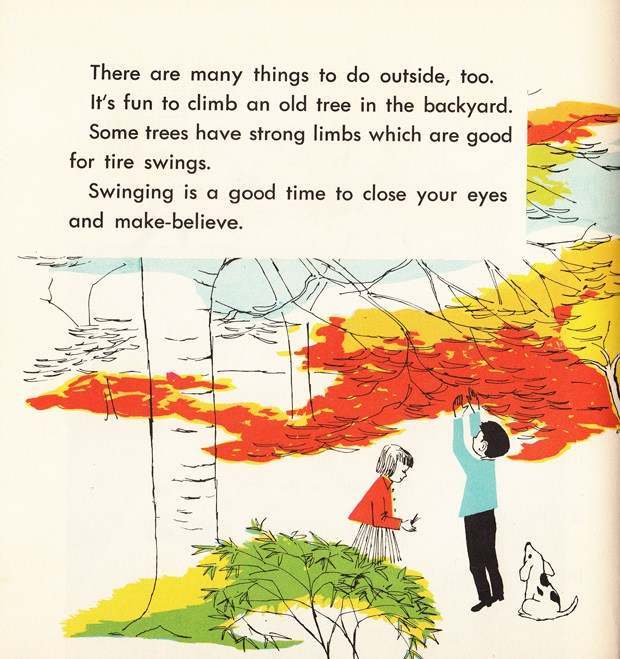 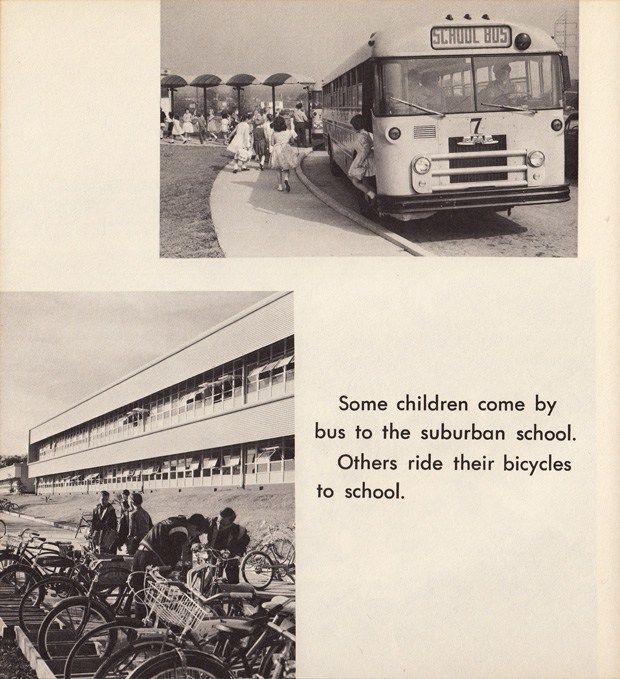 On the corner is a banker with a motorcar
The little children laugh at him behind his back
And the banker never wears a mack
In the pouring rain, very strange

Penny Lane is in my ears and in my eyes
There beneath the blue suburban skies
I sit, and meanwhile back

In Penny Lane there is a fireman with an hourglass
And in his pocket is a portrait of the queen
He likes to keep his fire engine clean
It’s a clean machine
– Penny Lane, the Beatles (1967) 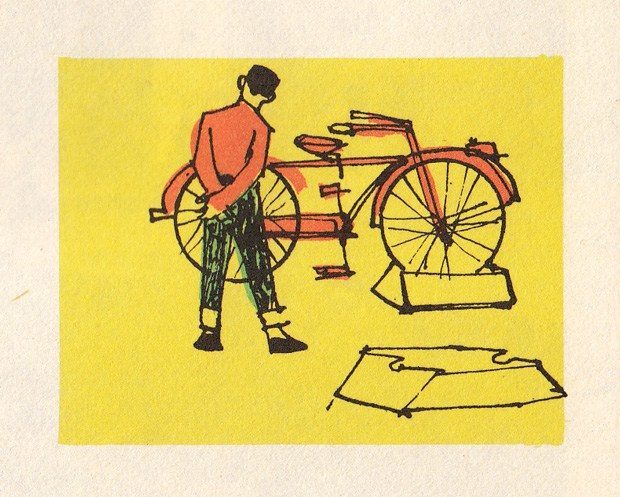 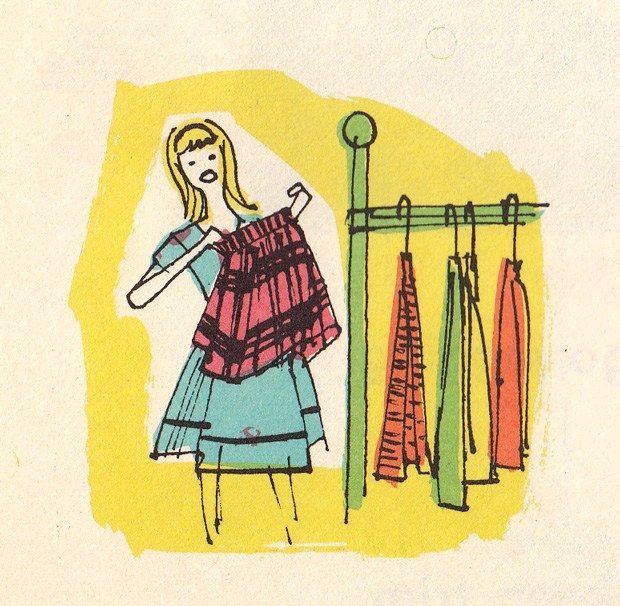 Here we go again, it’s Monday at last,
He’s heading for the Waterloo line,
To catch the 8 a.m. fast, its usually dead on time,
Hope it isn’t late, got to be there by nine.
– The Jam, Smithers-Jones 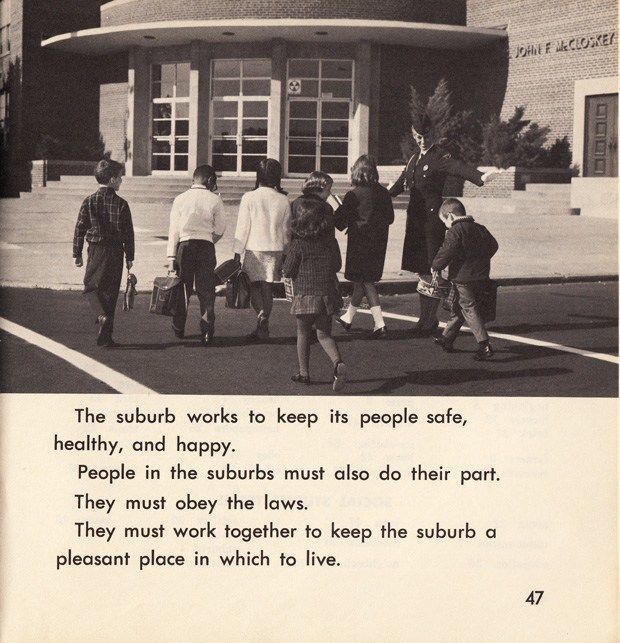 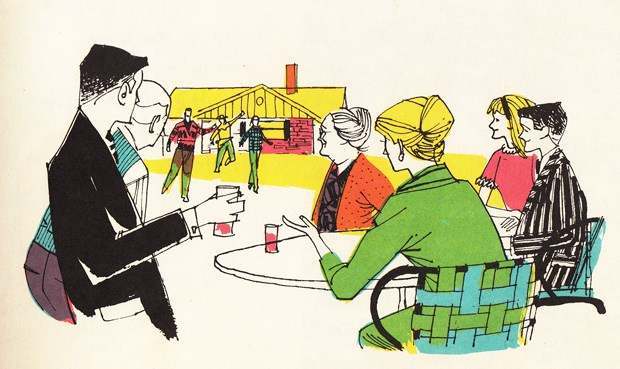