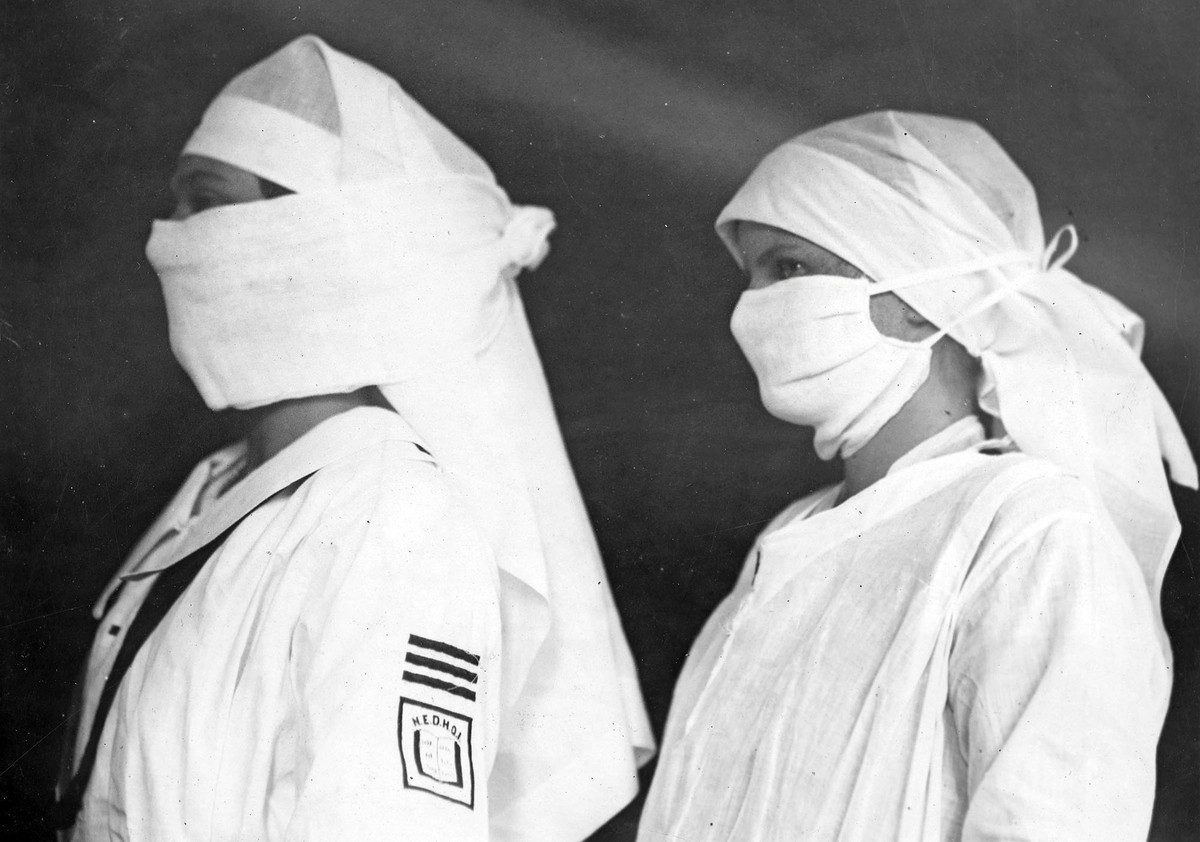 Nurses in Boston wearing masks to contain influenza in the spring of 1919.

Hope springs in the fight to beat flu. An injection to fight COVID-19 is on its way. US President Joe Biden advocates the wearing of face masks, even if not compulsory for those not medical exempt.

And we’ve been her before. In 1918, influenza, the so-called Spanish Flu, or 91918H1N1, to give its proper name, claimed the lives of more than 50 million people in just 15 months. Some estimates out the toll at 100 million. It was the worst pandemic of them all. Britain’s Daily Mirror newspaper reported that 65 soldiers had to be buried at sea from just one troopship before it arrived at Southampton. The global economy decreased by about 5 per cent. 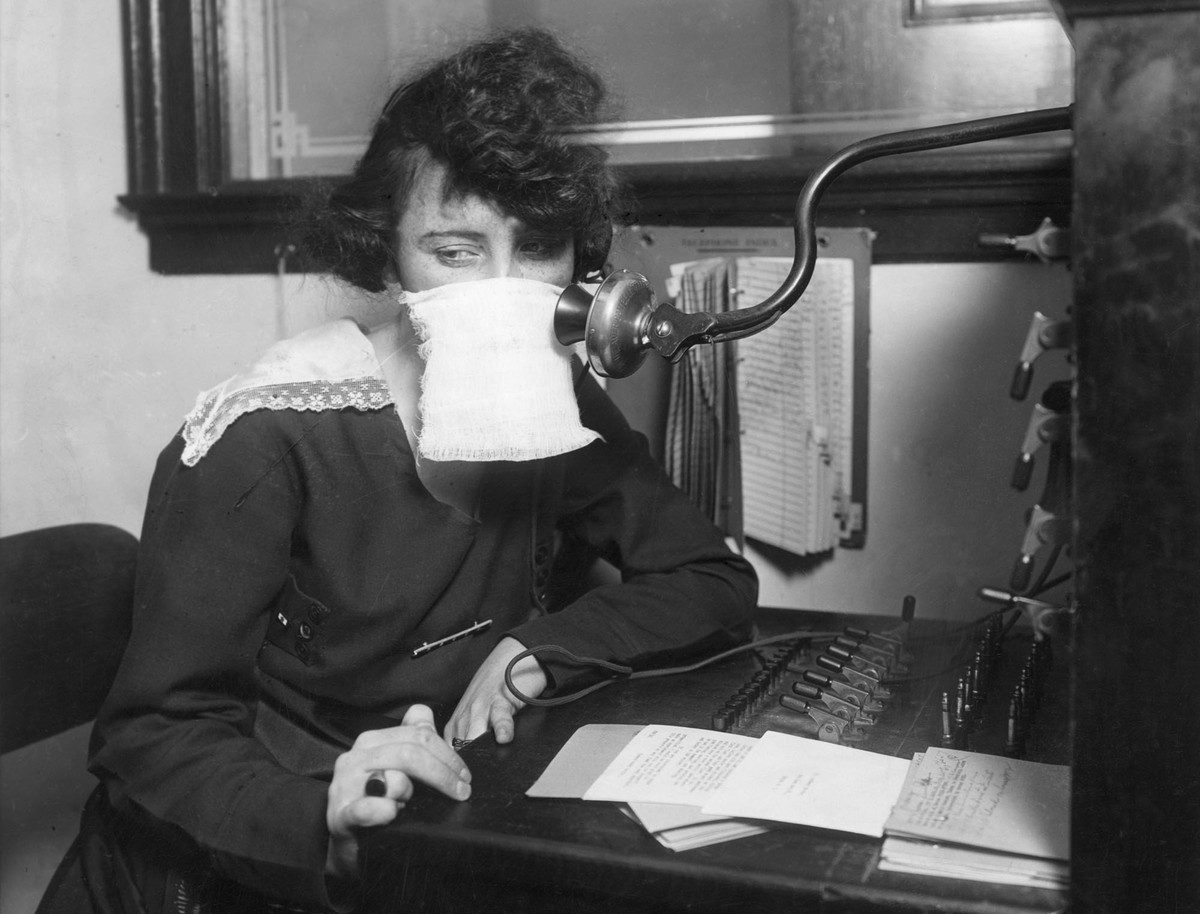 Historian John Barry, author of “The Great Influenza,” wrote that the US Congress passed a Sedition Act in May 1918, which made it a crime to “wilfully utter, print, write, or publish any disloyal, profane, scurrilous, or abusive language about the form of the Government of the United States.” That meant, whether they wanted to or not, the newspapers had to suppress any reports of the flu epidemic. It also meant, according to Barry, that “against this background, while influenza bled into American life, public health officials, determined to keep morale up, began to lie.” The huge movement of soldiers around the world contributed to the transmission of the H1N1 virus with a speed never before seen.

The British advised “Give up shaking hands for the present and give up kissing for all time”. Posters encouraged Japan’s population to “wear masks, “stay away”; “cover your mouth and nose”; “get vaccinated”; and “gargle”. 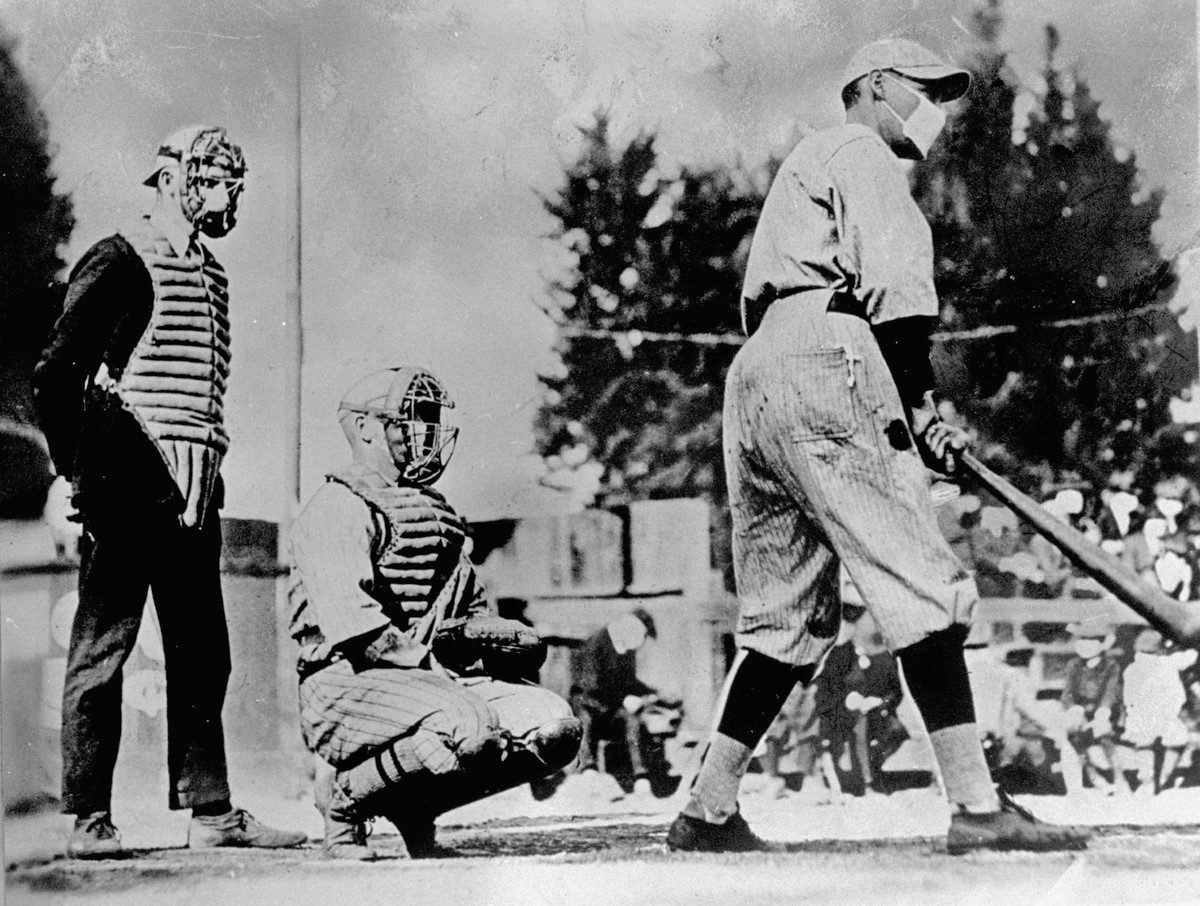 1918: Unident baseball players, one batting & one catching, with umpire standing behind plate, wearing masks which they thought would keep them from getting flu during influenza epidemic of 1918. 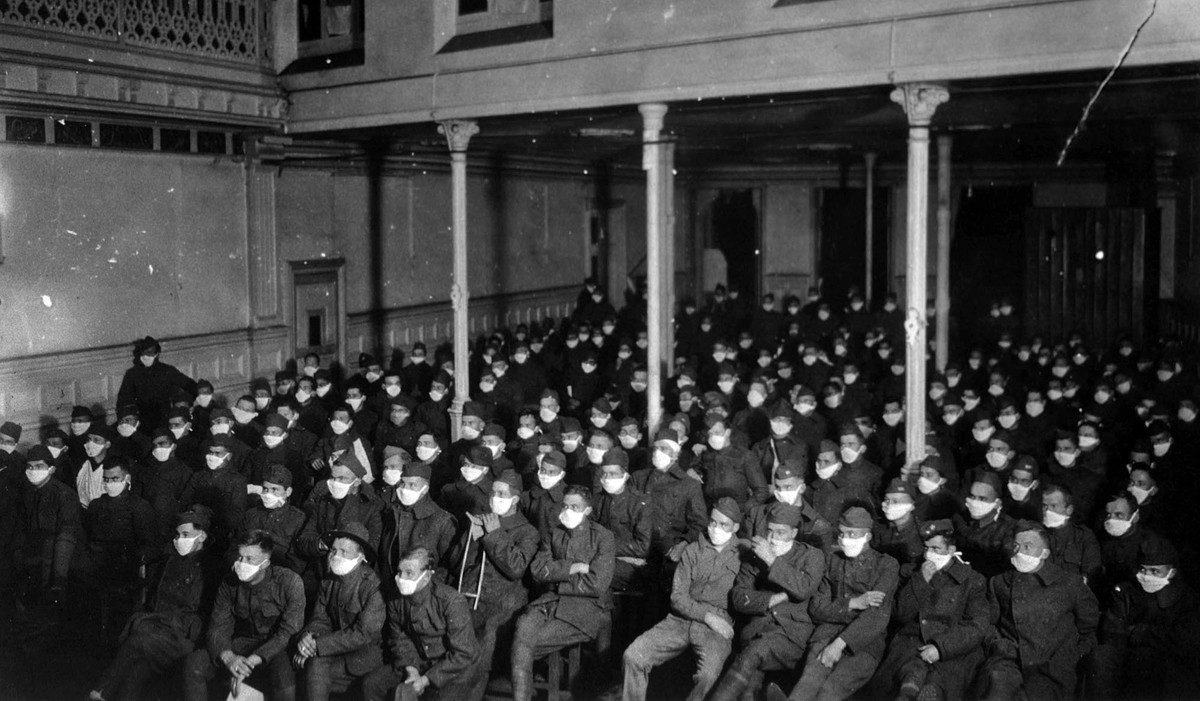 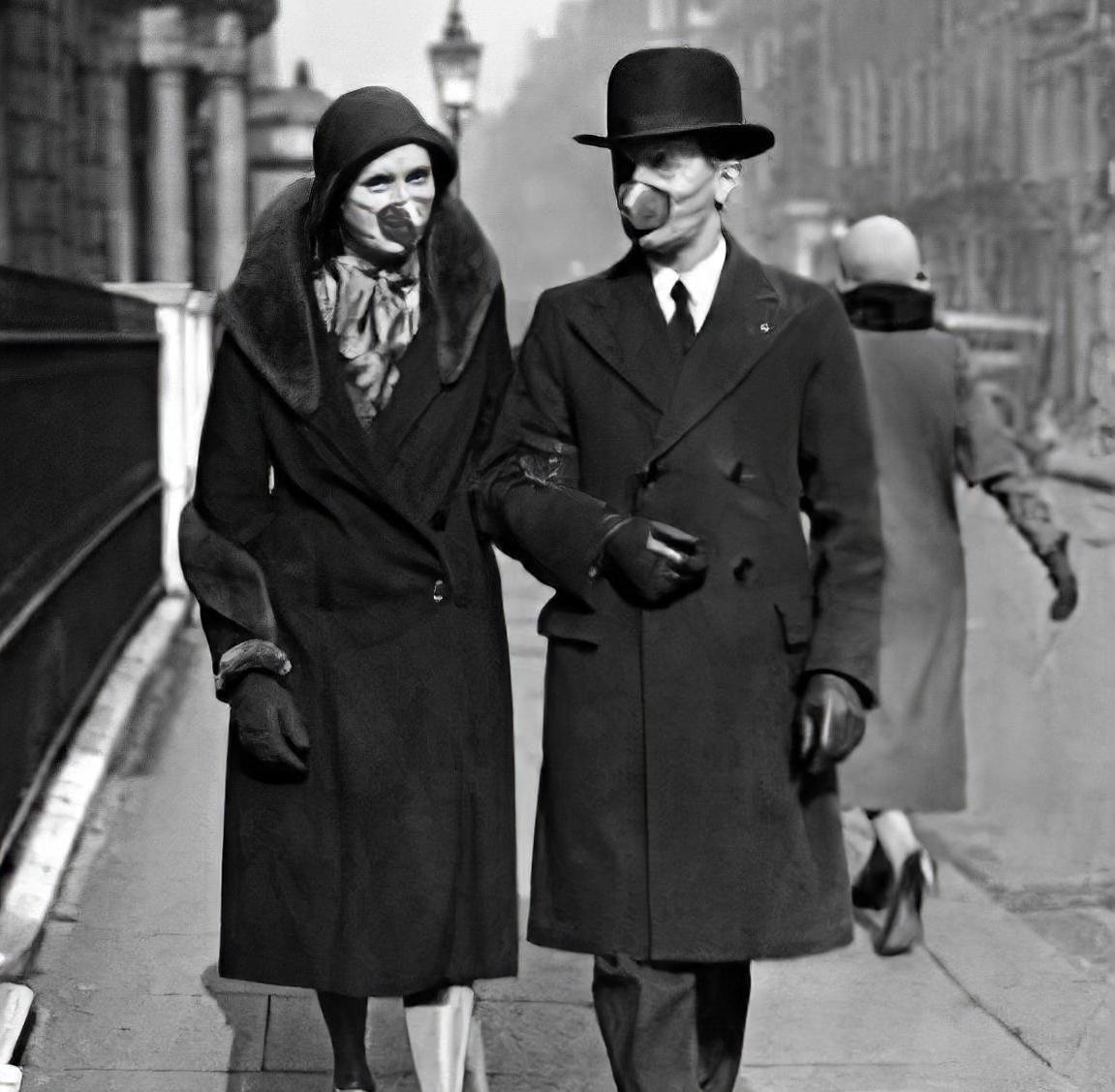 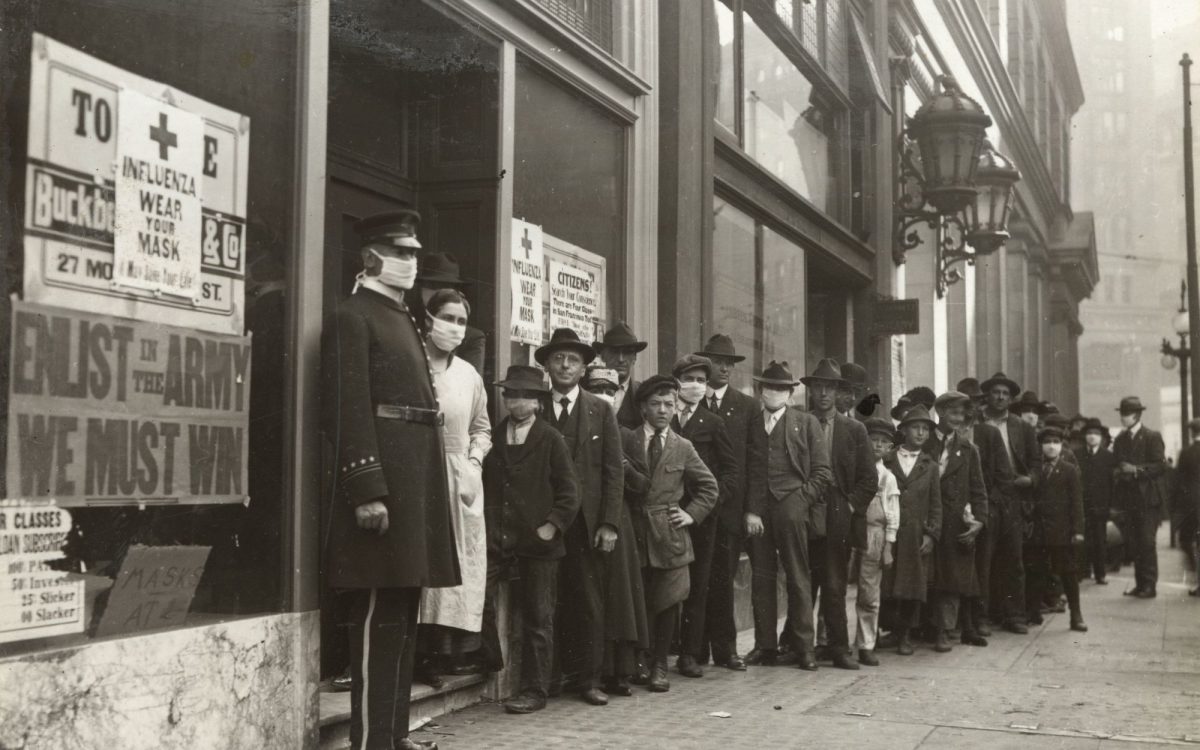 People wait in line to get flu masks on Montgomery Street in San Francisco in 1918. (Hamilton Henry Dobbin) 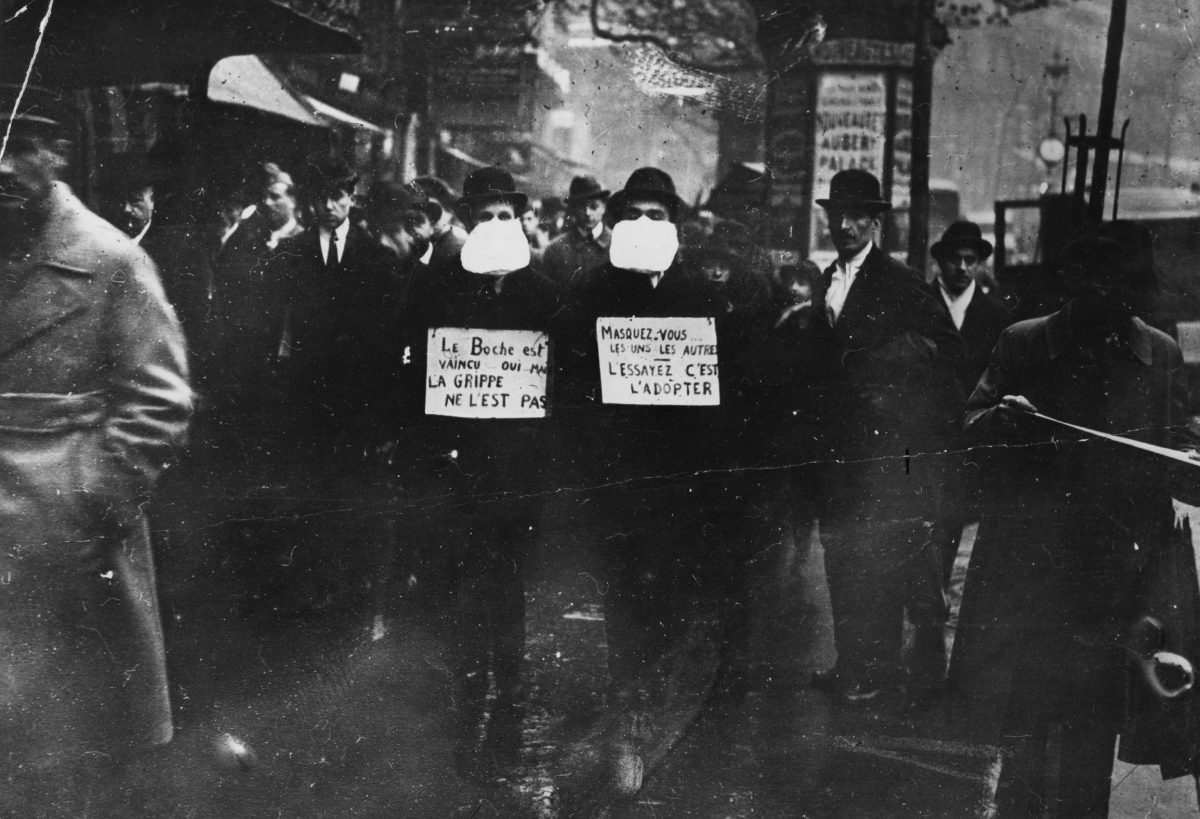 1st March 1919: Two men wearing and advocating the use of flu masks in Paris during the Spanish flu epidemic which followed World War I. 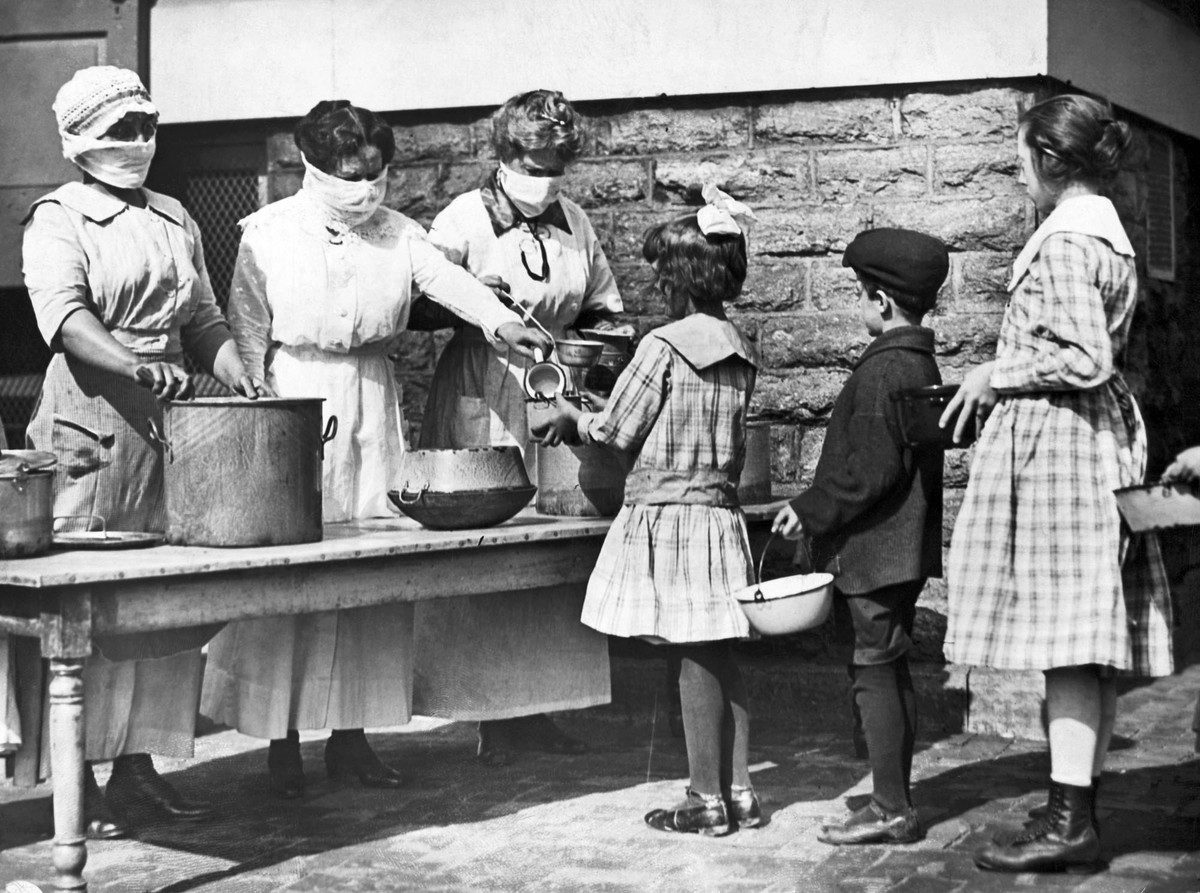 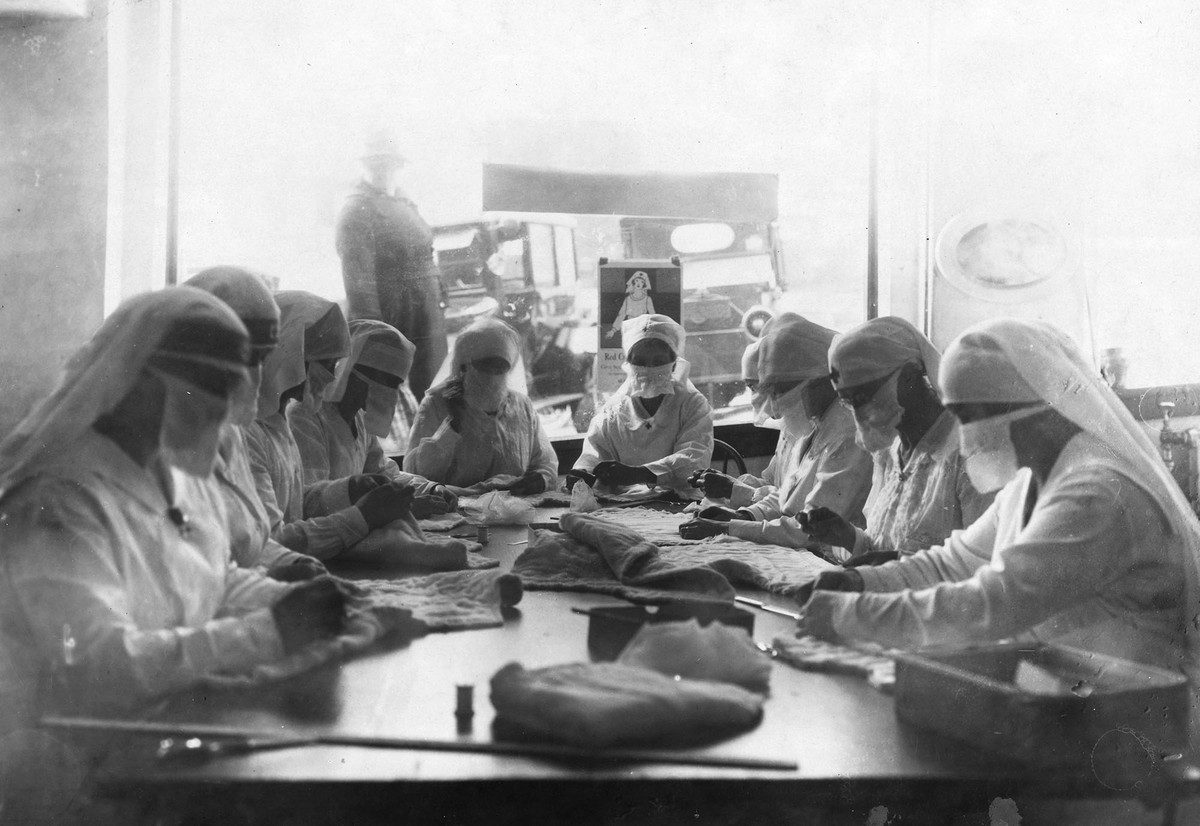 Combatting influenza in Seattle in 1918. At work in the Red Cross rooms in Seattle, Washington, with influenza masks on faces . (National Archives) 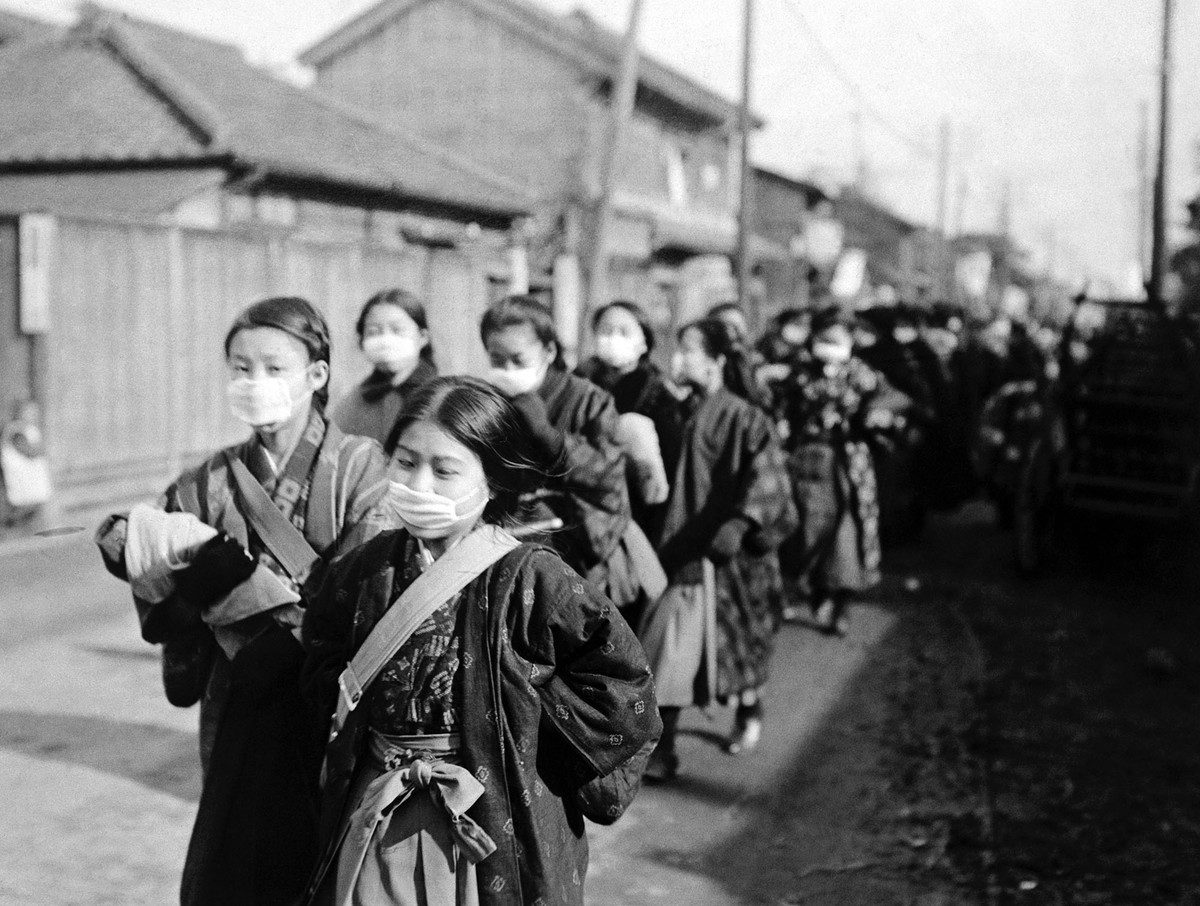 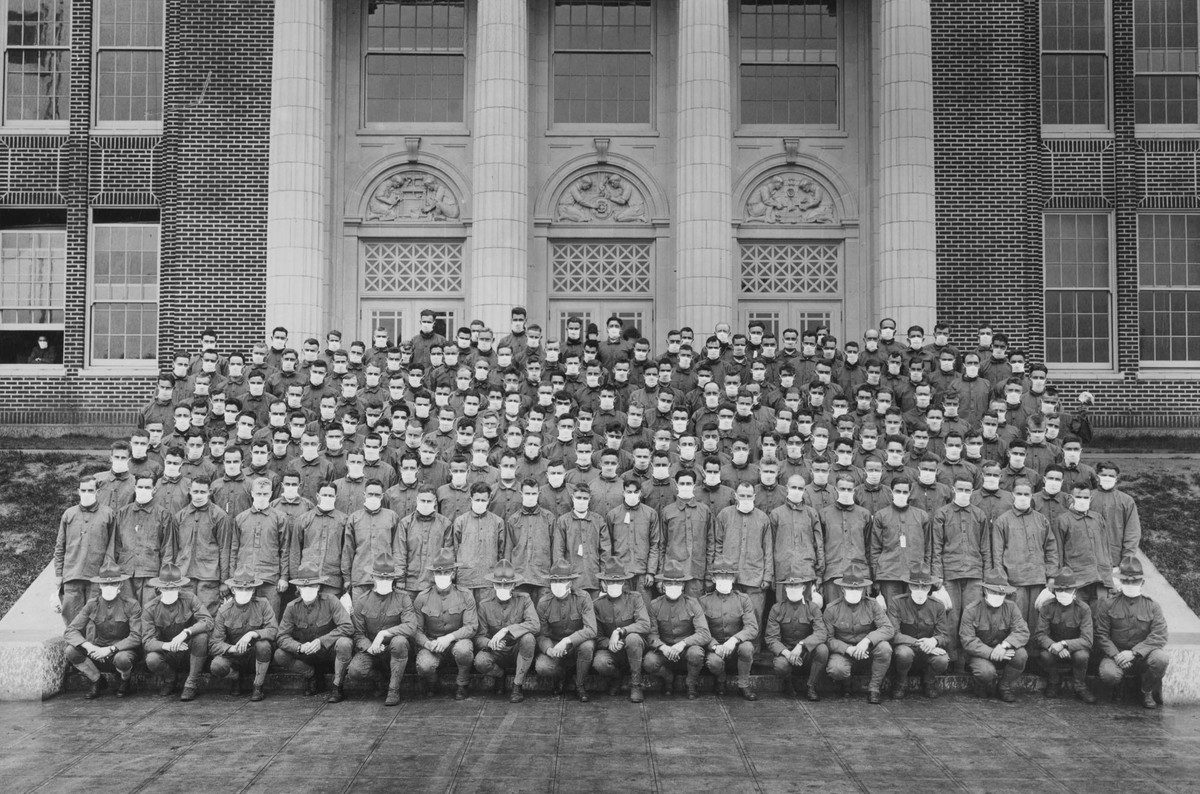 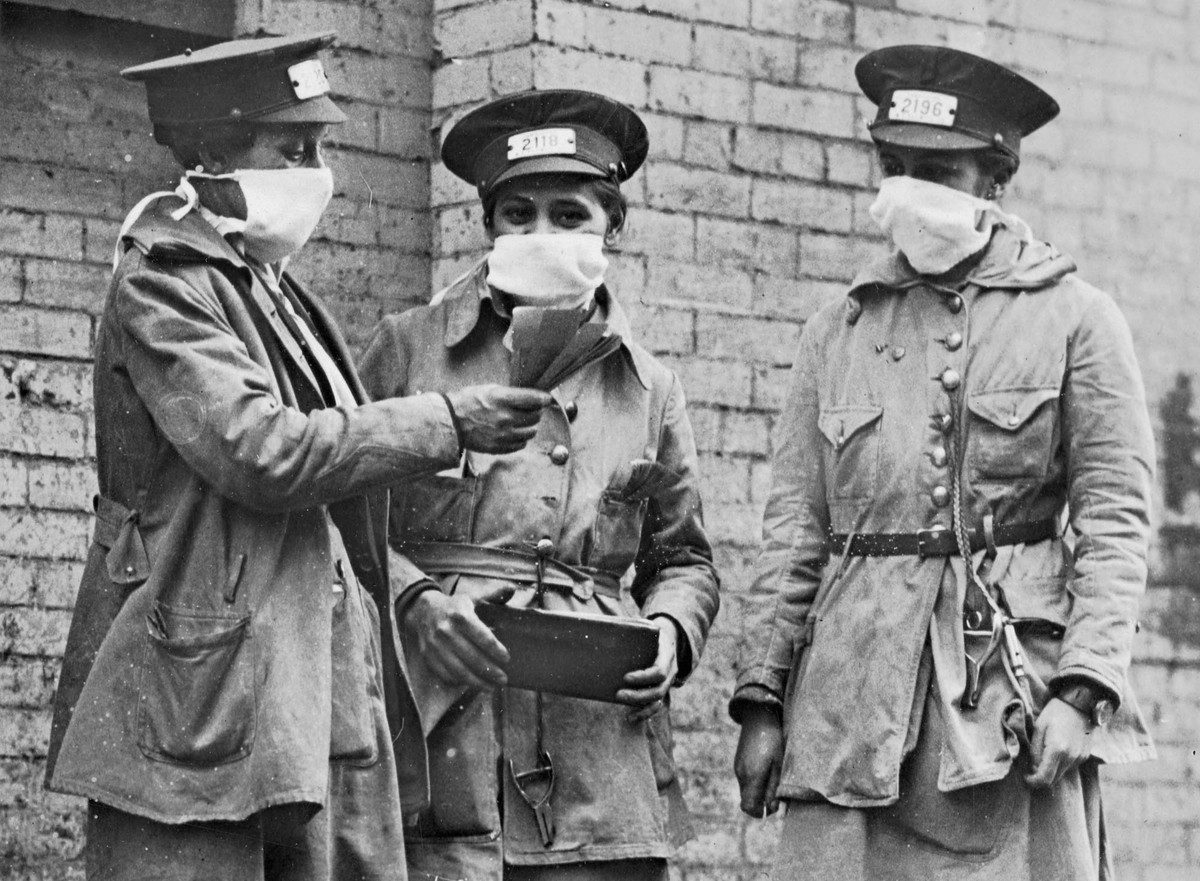 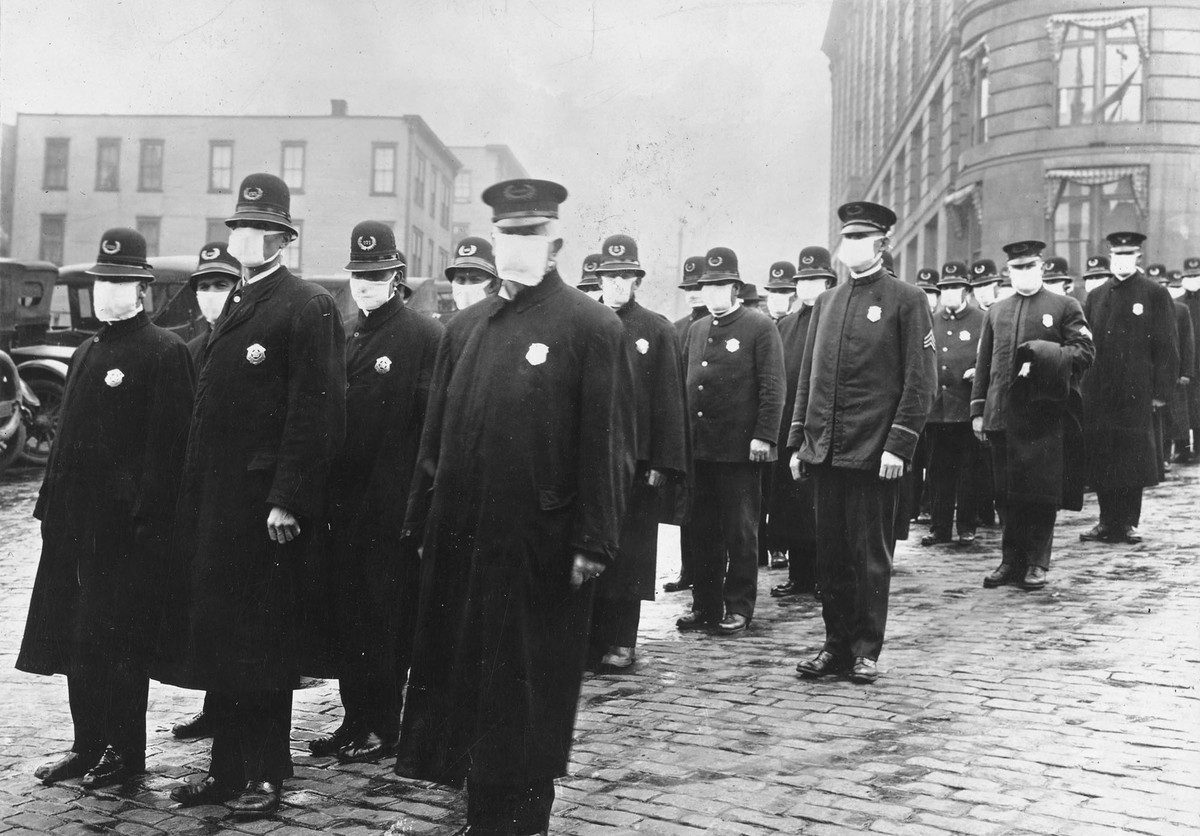 Influenza Epidemic 1918 – Policemen in Seattle, Washington, wearing masks made by the Seattle Chapter of the Red Cross, during the influenza epidemic. (National Archives) 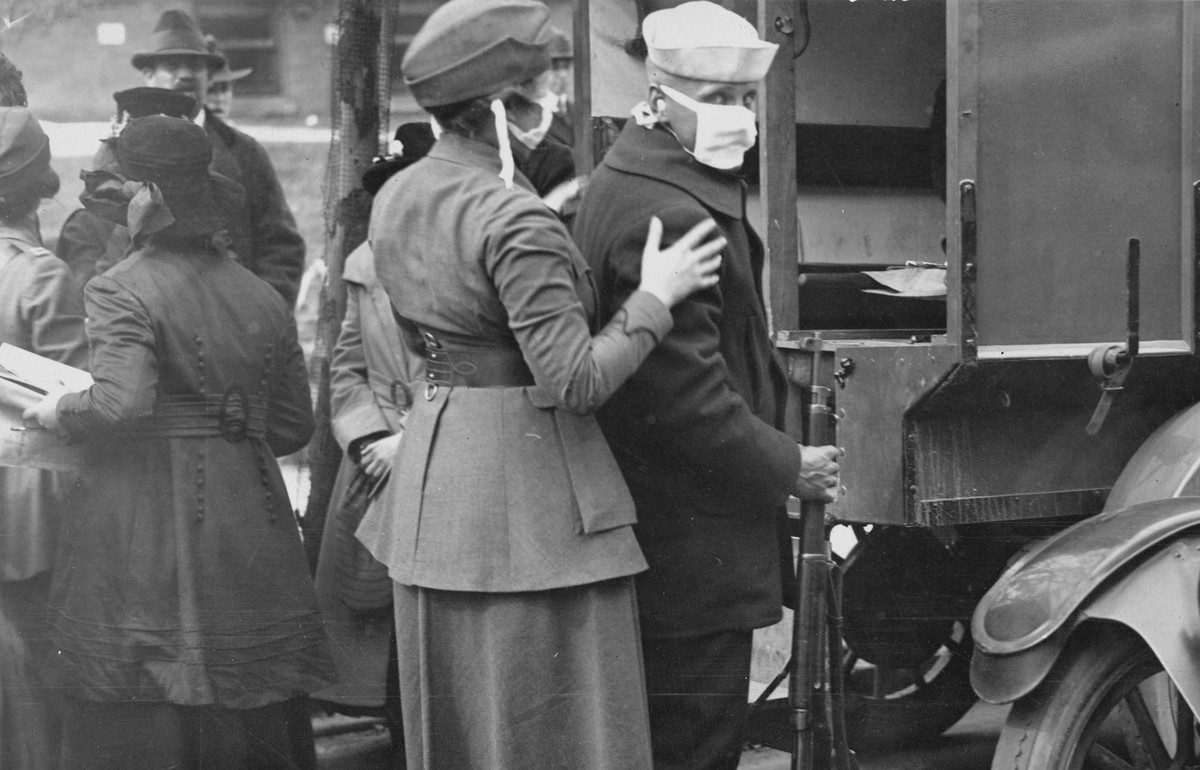 A sailor and a member of the Women’s Motor Corps wear masks while treating influenza patients injured by the explosions of a coal loading plant at Morgan, New Jersey, on October 5, 1918 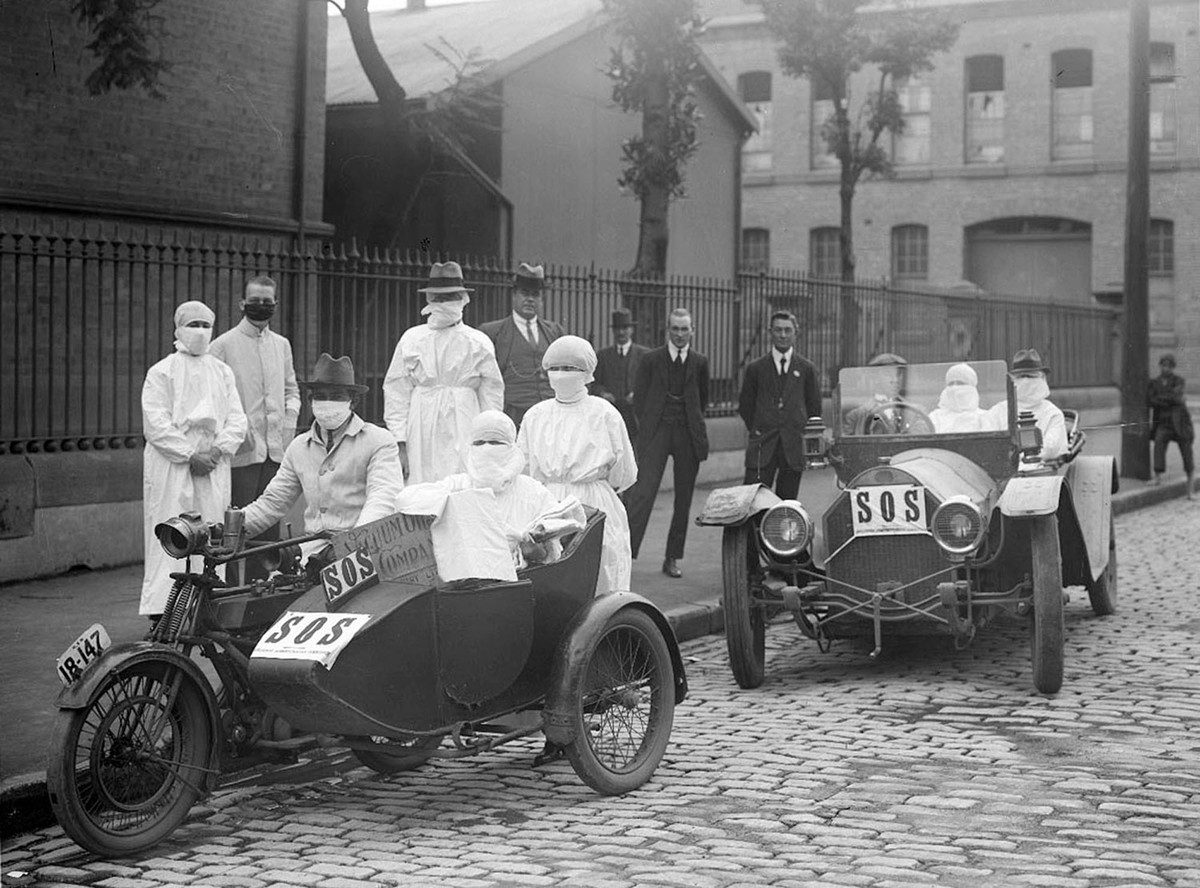 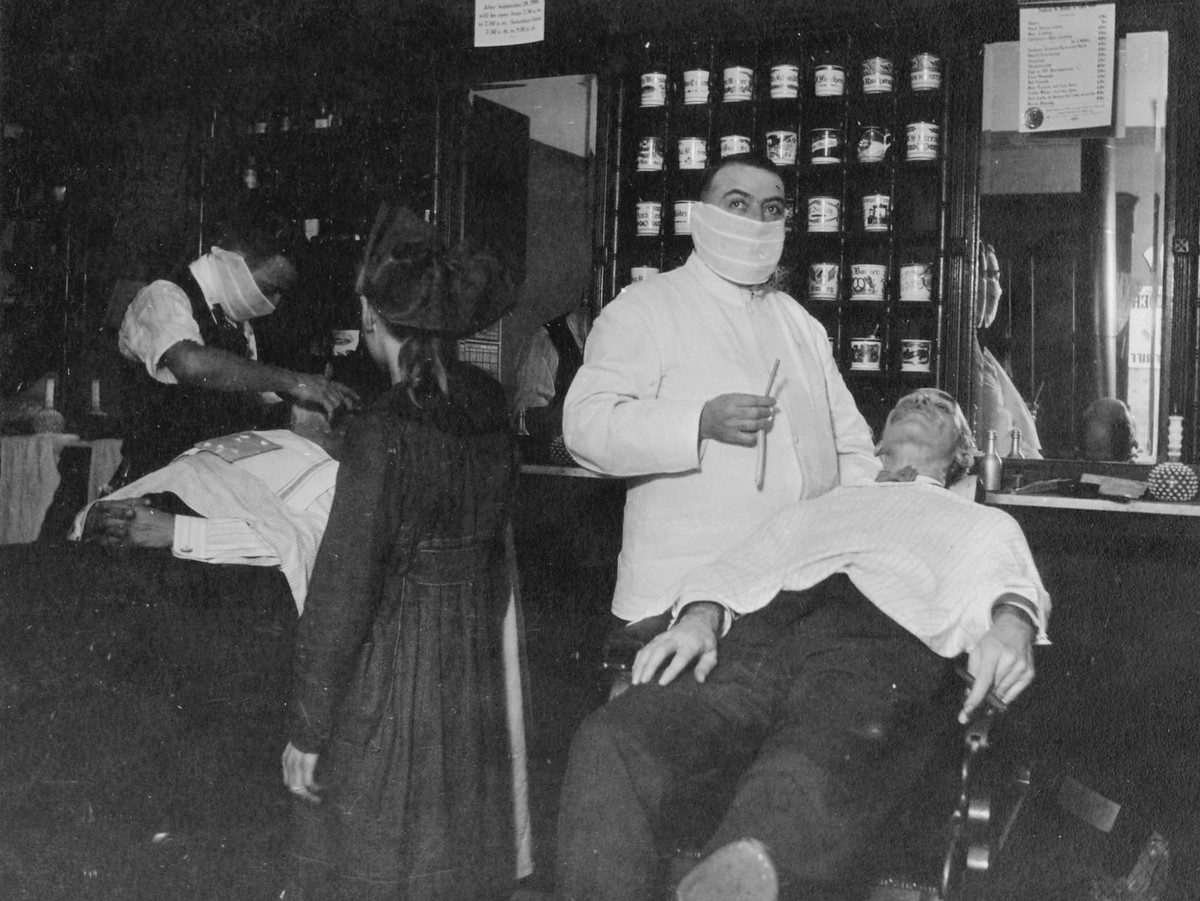 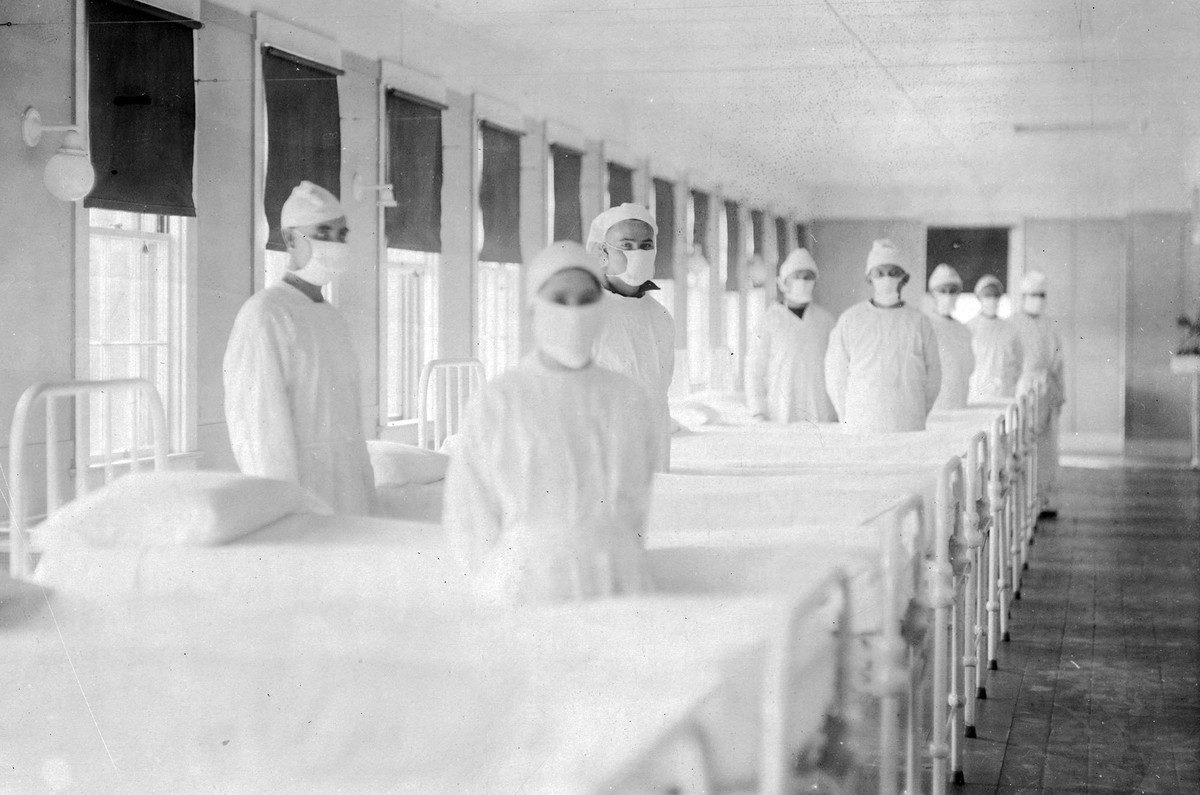 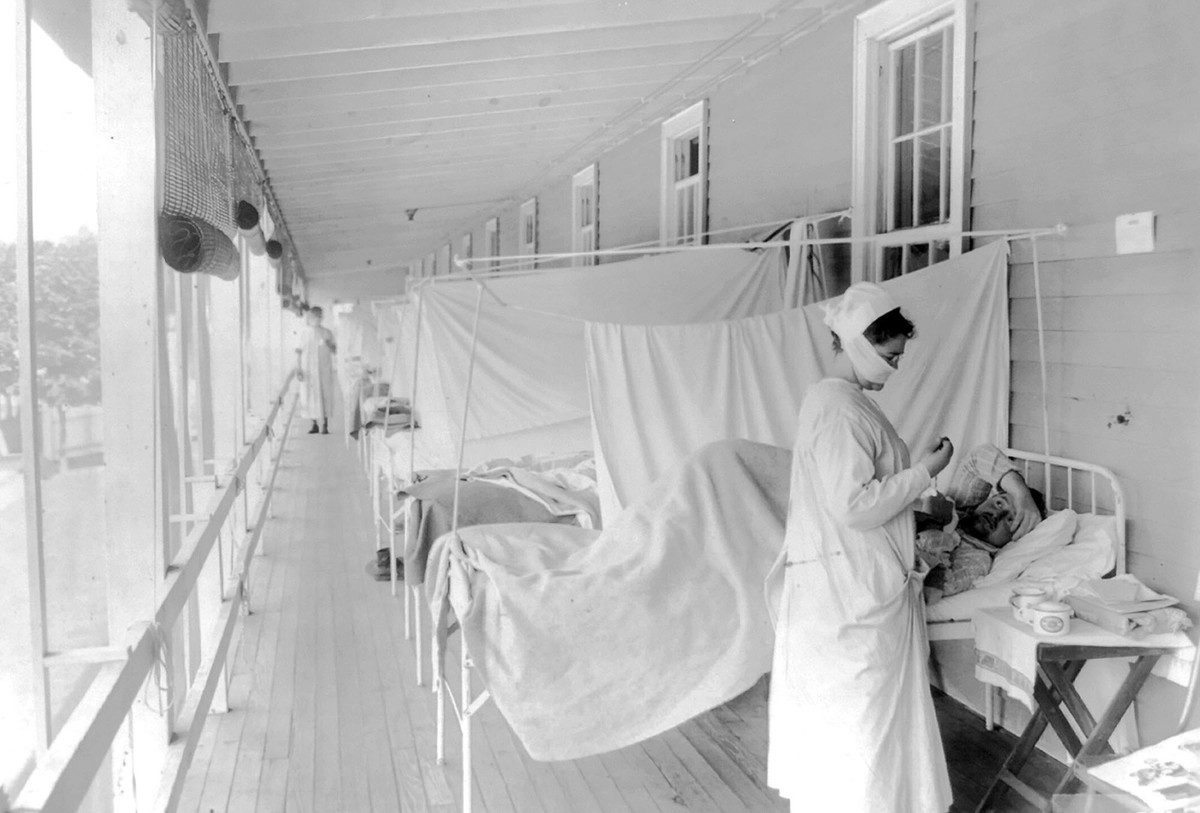 In this November 1918 photo made available by the Library of Congress, a nurse takes the pulse of a patient in the influenza ward of the Walter Reed hospital in Washington.  (Harris & Ewing/Library of Congress via AP) 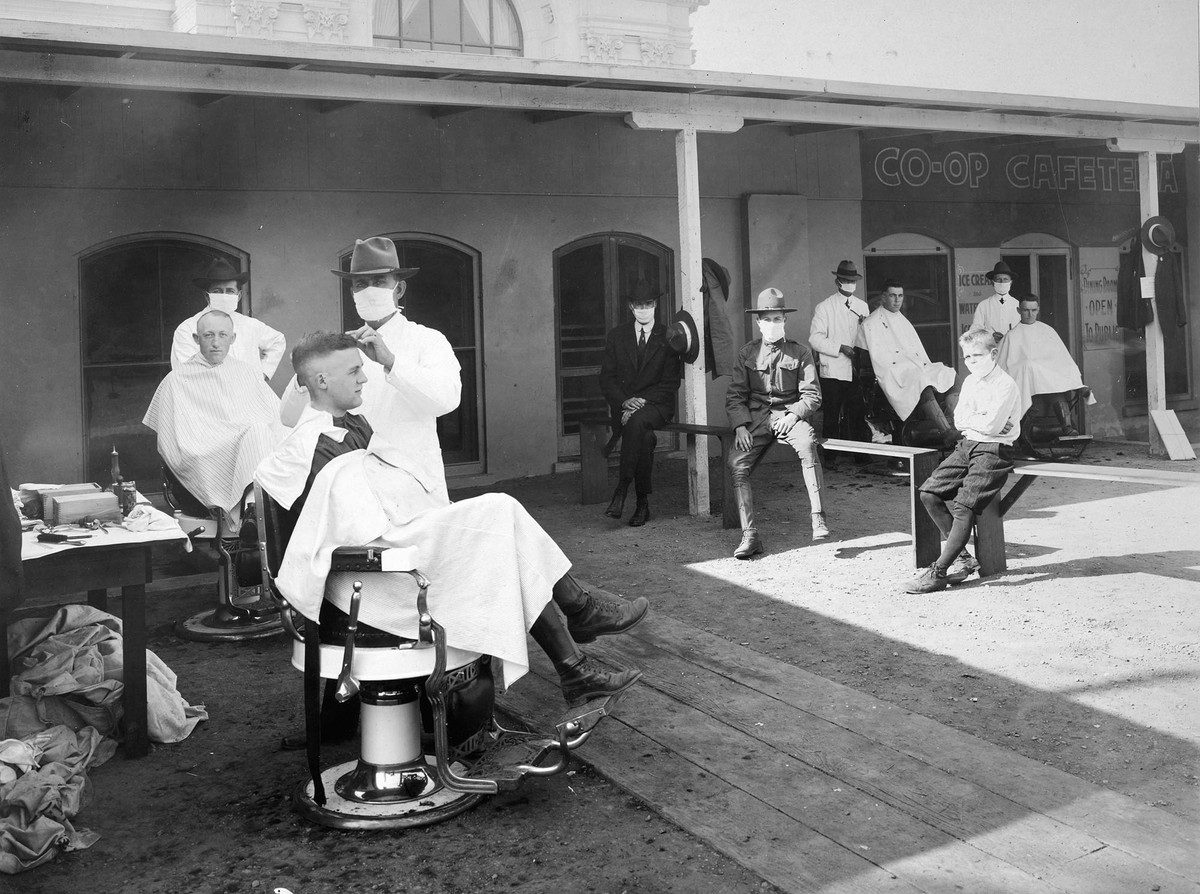 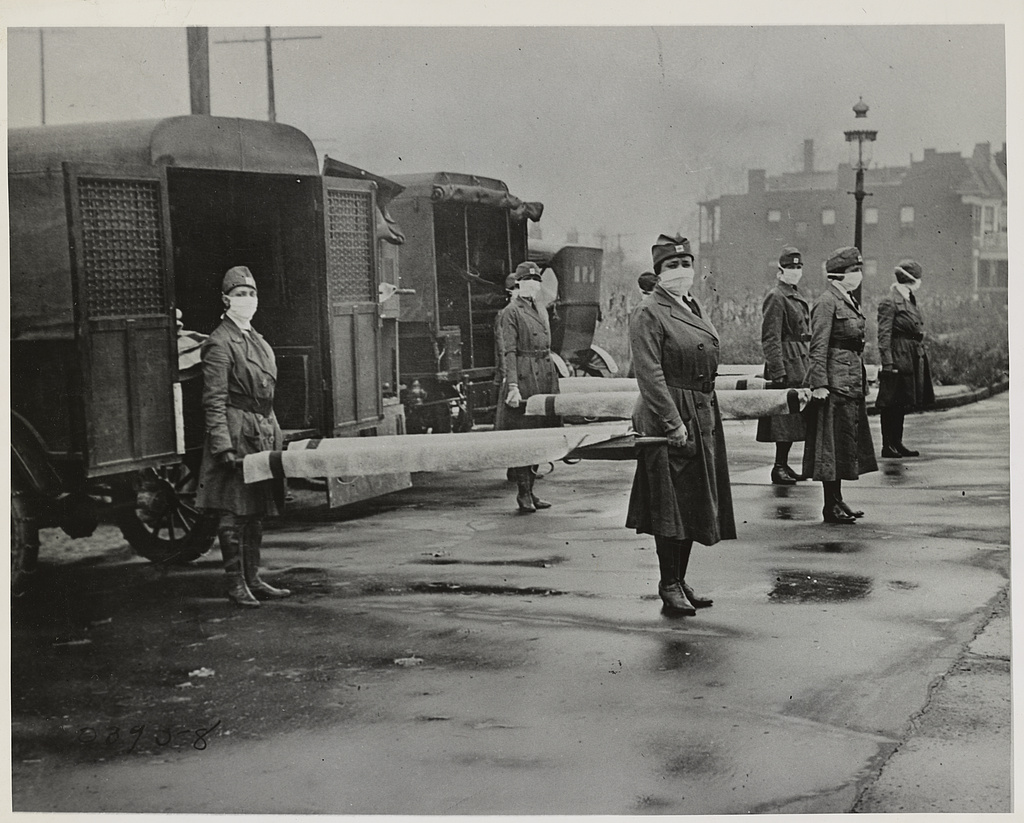