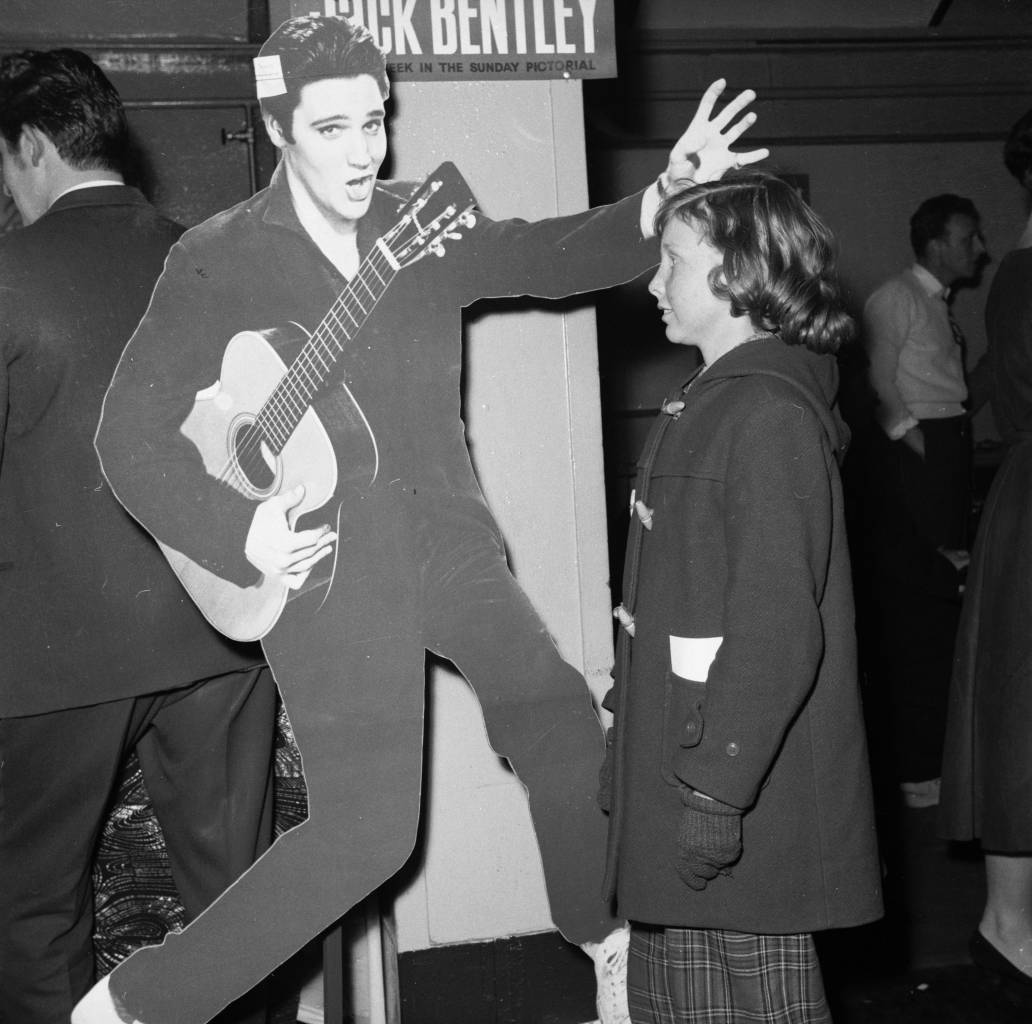 February 1958: 18 year old Elvis fan Lillie Cooper of Tollworth in Surrey staring at a life-size cardboard cut-out of Elvis Presley, a prize in a raffle to be drawn at the rock ‘n’ roll contest at Wimbledon Palais in London. (Photo by Rosemary Matthews/BIPs/Getty Images)

Julien’s – “The Auction House to the Stars” – features as part of its Icons and Idols 2015: Rock n’ Roll a few unusual Elvis Presley keepsakes. You can buy pretty much anything Elvis owned, passed by or maybe looked at, whether it by lairy gimcrack tat or of gilded quality that night have been worth its price before the great singer sprinkled it with stardust and sweat.

You can buy all manner of Elvis stuff. 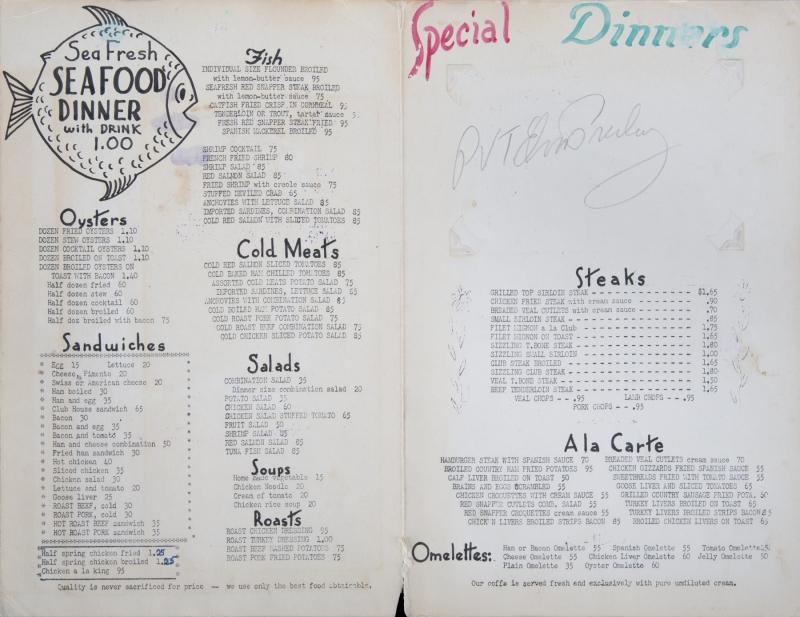 An Elvis Presley signed menu from the Andrews Café in Hillsboro, Texas. Signed on the menu interior “PVT Elvis Presley.”

A Chai pendant for Yiddisher Elvis. 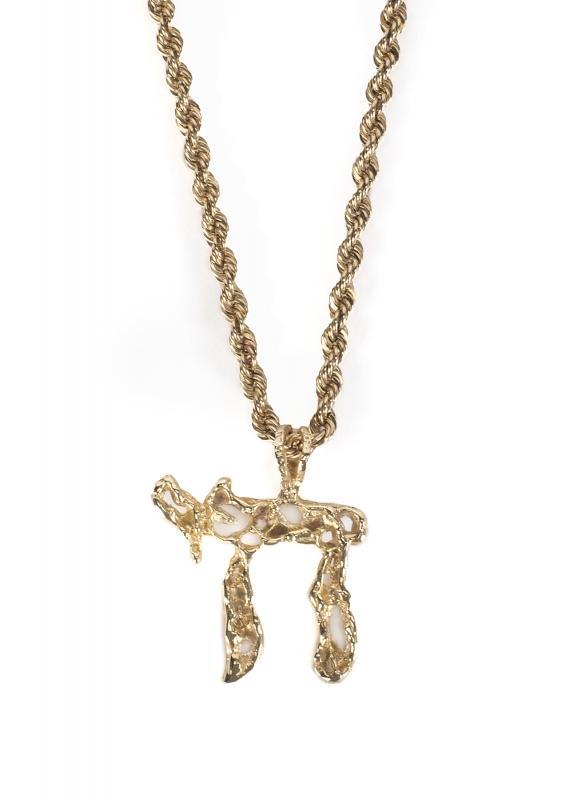 A 14K gold Chai symbol and 14K gold rope chain, purchased and worn by Elvis Presley on stage and at Graceland. Accompanied by a signed letter of authenticity from Presley’s cousin Donna Presley Early, stating that the gold Jewish symbol belonged to Elvis, and he wore it to “cover all his bases,” and a letter from the Elvis-A-Rama Museum detailing the history of the pendant. Elvis can be seen wearing this or a similar Chai necklace in his last concert in 1977 below. 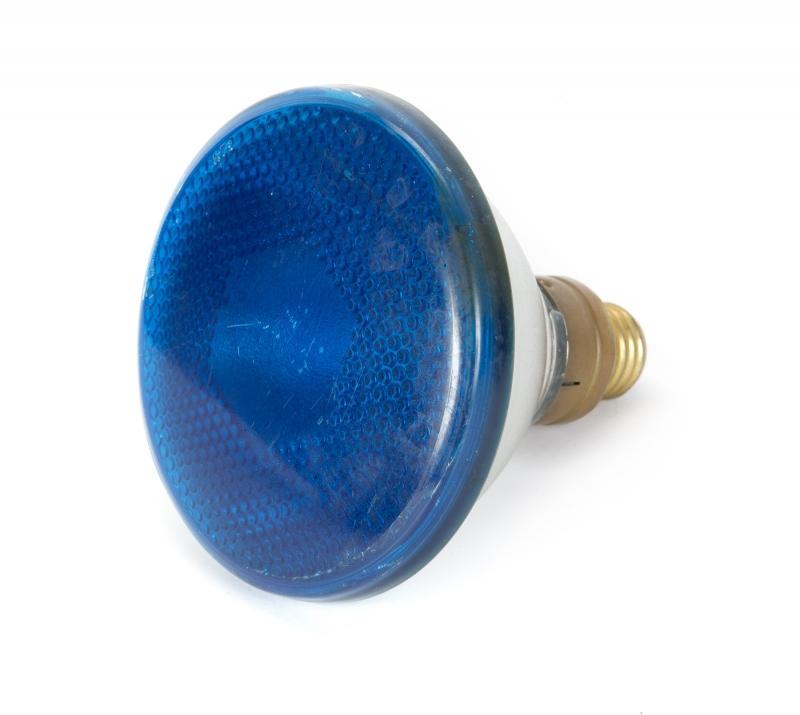 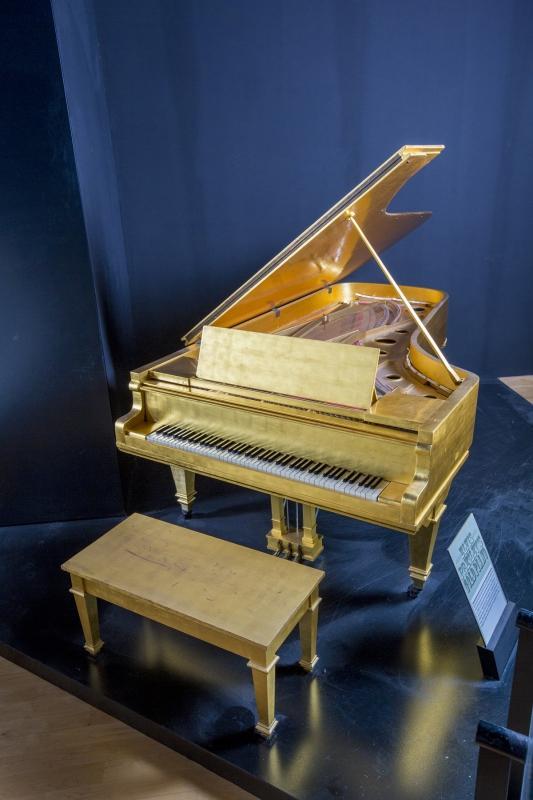 A 1928 Kimball Piano Company grand piano plated with 24K gold leaf and played by Elvis Presley while in the music room of his Graceland home in Memphis, Tennessee. The piano’s original finish was walnut, and it was once housed in the Dixon-Myers Hall, now the Cook Convention Center, in Memphis. Presley purchased the piano for his mother in 1955 when the city of Memphis sold the piano, and had it moved to his new home on Audubon Drive when it would not fit into their apartment. The piano was later delivered to Graceland and kept in the music room, where an Organo system was installed so that Presley could have back-up music while playing it.
The piano was placed into storage after Presley’s mother’s death and taken out when Priscilla Presley decided to adorn the piano in 24K gold-leaf finish as a gift for the couple’s first wedding anniversary.

Nice. But maybe not personal enough. What about owning something linked to Elvis’ insides? What about buying his drug paraphernalia? 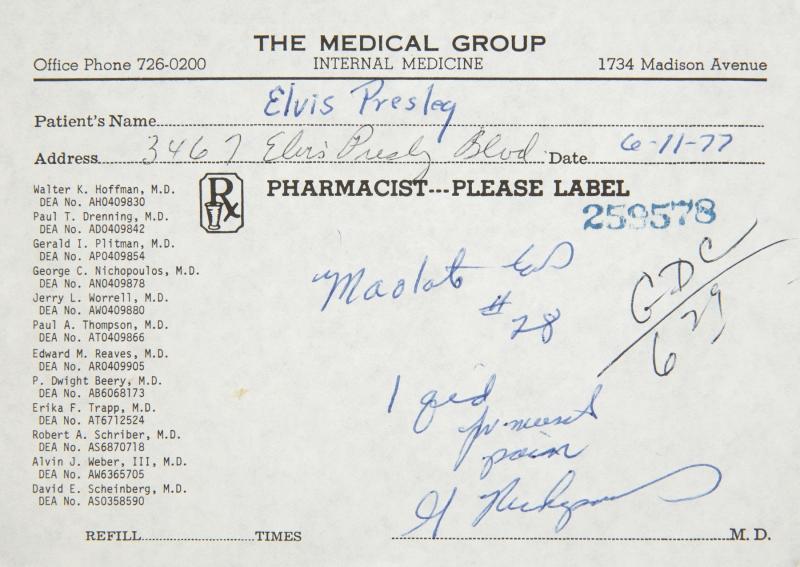 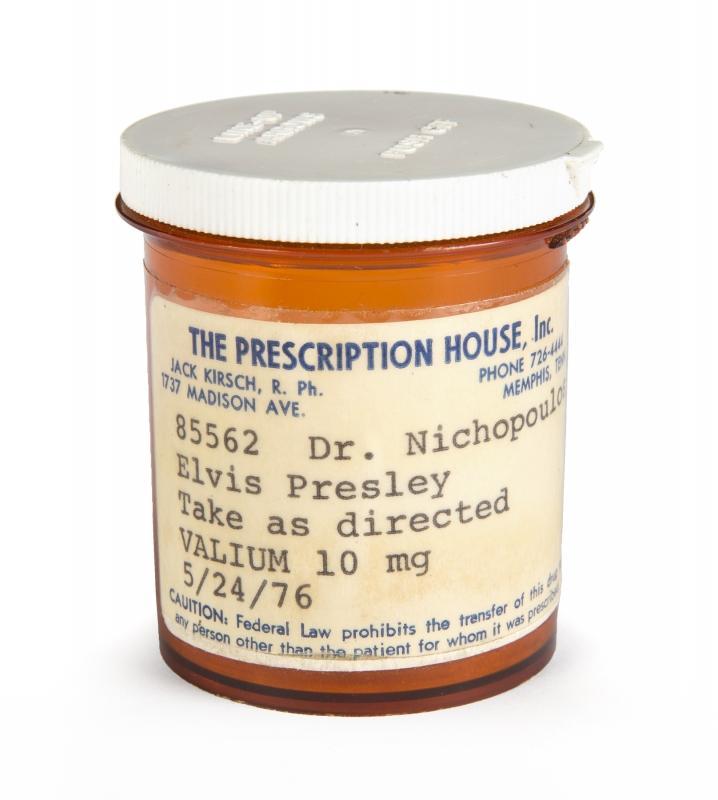 An Elvis Presley prescription pill bottle for Valium. The bottle bears a Prescription House label for 10 mg Valium prescribed to Elvis Presley, dated May 24, 1976, and prescribed by Dr. Nichopoulos (Dr. Nick). The label instructs that Presley should take as directed. 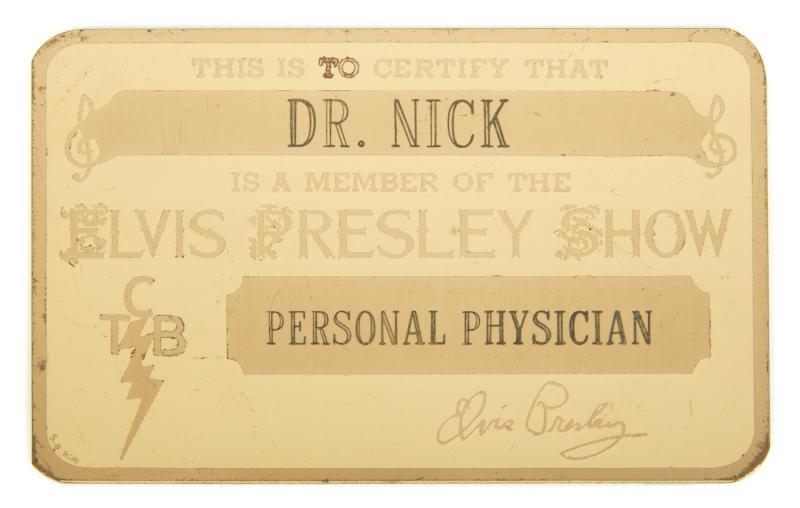 An identification card given to Dr. George Nichopoulos (Dr. Nick) by Elvis Presley. The gold tone card is engraved “This is to Certify that/ Dr. Nick/ Is a Member of the/ Elvis Presley Show/ TCB/ Personal Physician” and contains an Elvis Presley facsimile signature. An Apollo Trophies sticker is affixed on the back of the card. 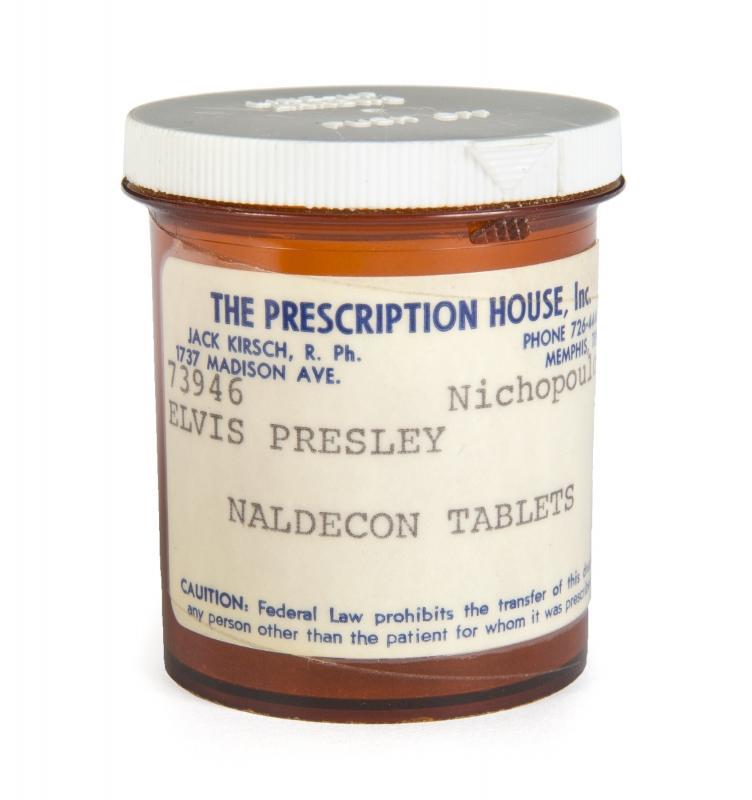 An Elvis Presley Naldecon prescription bottle, undated, with a label from The Prescription House, prescribed by Dr. George Nichopoulos (Dr. Nick). Naldecon is an antihistamine. Accompanied by a letter of authenticity from George Klein. 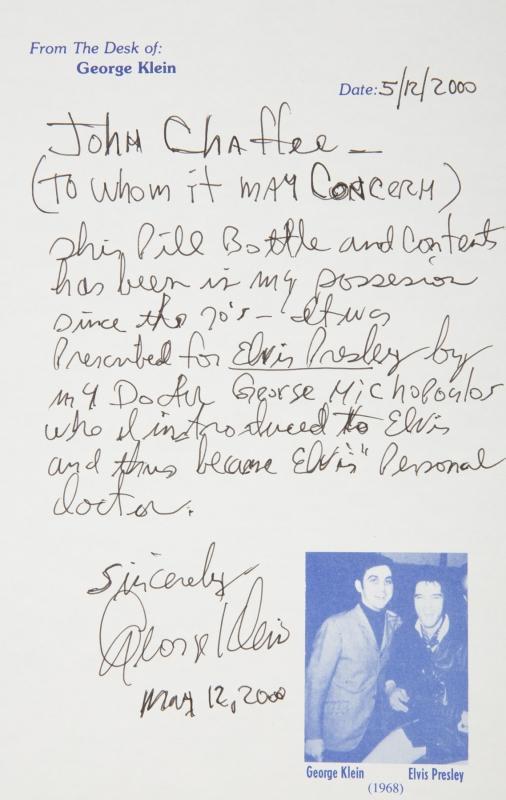