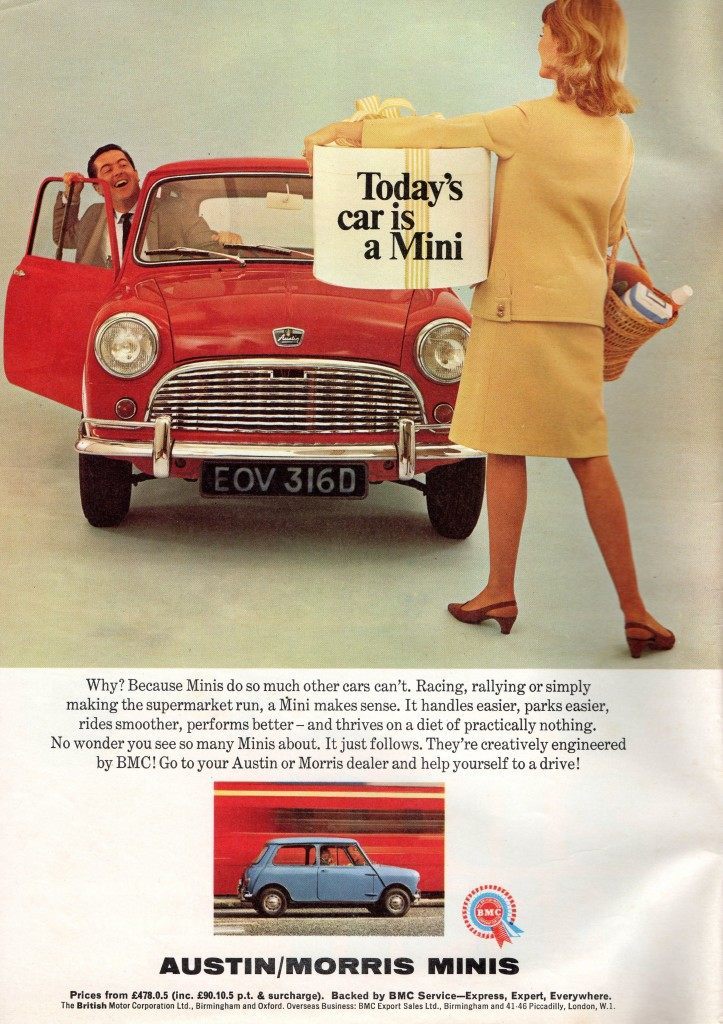 The BMC Mini was launched in 1959 about the same time Harold Macmillan proclaimed to the country: ‘You’ve never had it so good’. The British motor industry thought he was talking to them. On the surface it looked like everything was going splendidly – influential designers such as Alec Issigonis were working with exciting new technology all tempered with Britain’s grand history of motoring and its famous marques.  Much of the business, however, was run by bumbling amateurs who weren’t helped by continual unofficial and wildcat strikes. If you’ve watched the film ‘It’s Alright Jack’ and thought it was a bit of an exaggeration – it wasn’t.  If anyone looked closely, however,  they would have realised that it had all started to go wrong. Although it was less than fifteen years since the end of WW2 the German motor industry had just started making more vehicles than the British. This incredible achievement was almost completely due to the worldwide success of the Volkswagen Beetle.

After the war the Volkswagen factory was in British hands and run by Major Ivan Hirst who got the bomb-damaged factory mended and managed to galvanise the workforce. Soon the company was churning out Beetles using spare parts from Kubelwagens (a military wartime version of the Beetle) and by 1946 they were producing 1000 cars a month. Sir William Rootes, on behalf of the British Government visited the Volkswagen factory that year, to evaluate it for war reparations, and reported back that the cars were ‘too ugly and noisy’ to sell. He went on to tell Major Hirst: “If you think you are going to build cars in this place, young man, you are a bloody fool’.

Lord Nuffield had created BMC in 1953 as a homegrown alternative to Ford and merged his Oxford based Morris Motors with Austin who were centred around Birmingham. Including other marques such as MG, Riley and Wolseley BMC started life with 40 per cent of the home market. The company was initially led by Leonard Lord infamous for his bullying behaviour and rudeness not to mention a distinct lack of vision. Not only were Austin and Morris always encouraged to produce similar cars in direct competition with each other, it was Lord that insisted that to undercut the Ford Anglia the Mini should retail at just £350 (approximately £7,000 in today’s money) when each vehicle cost £35 more than that to produce. It didn’t really ever get much better – when the 5 millionth Mini rolled off the production line in the 1990s it was estimated that the most successful and iconic British car ever had generated hardly £5 a car. In 2003, when the final Beetle came to be made, Volkswagen had sold over 21.5 million of them. 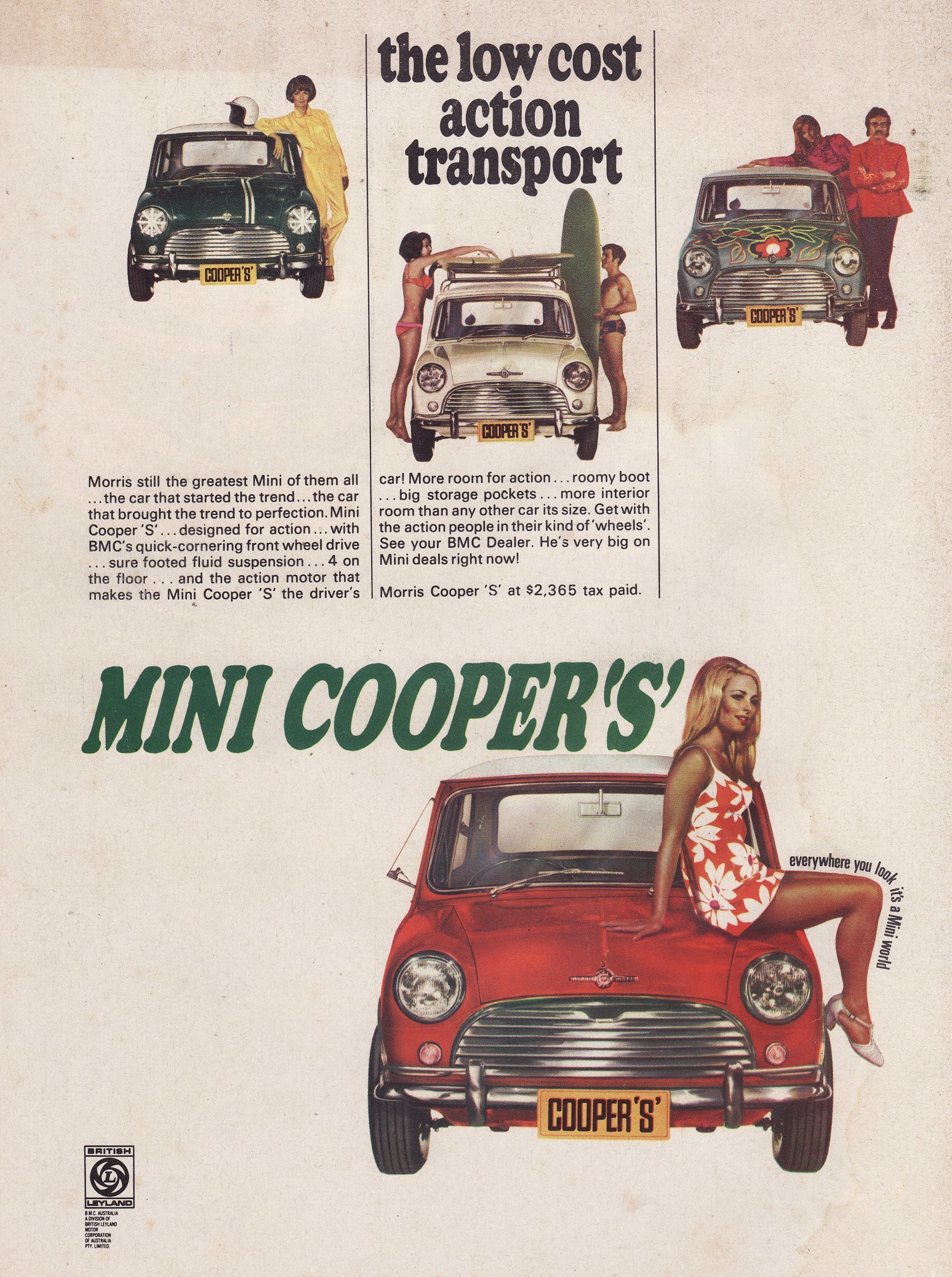 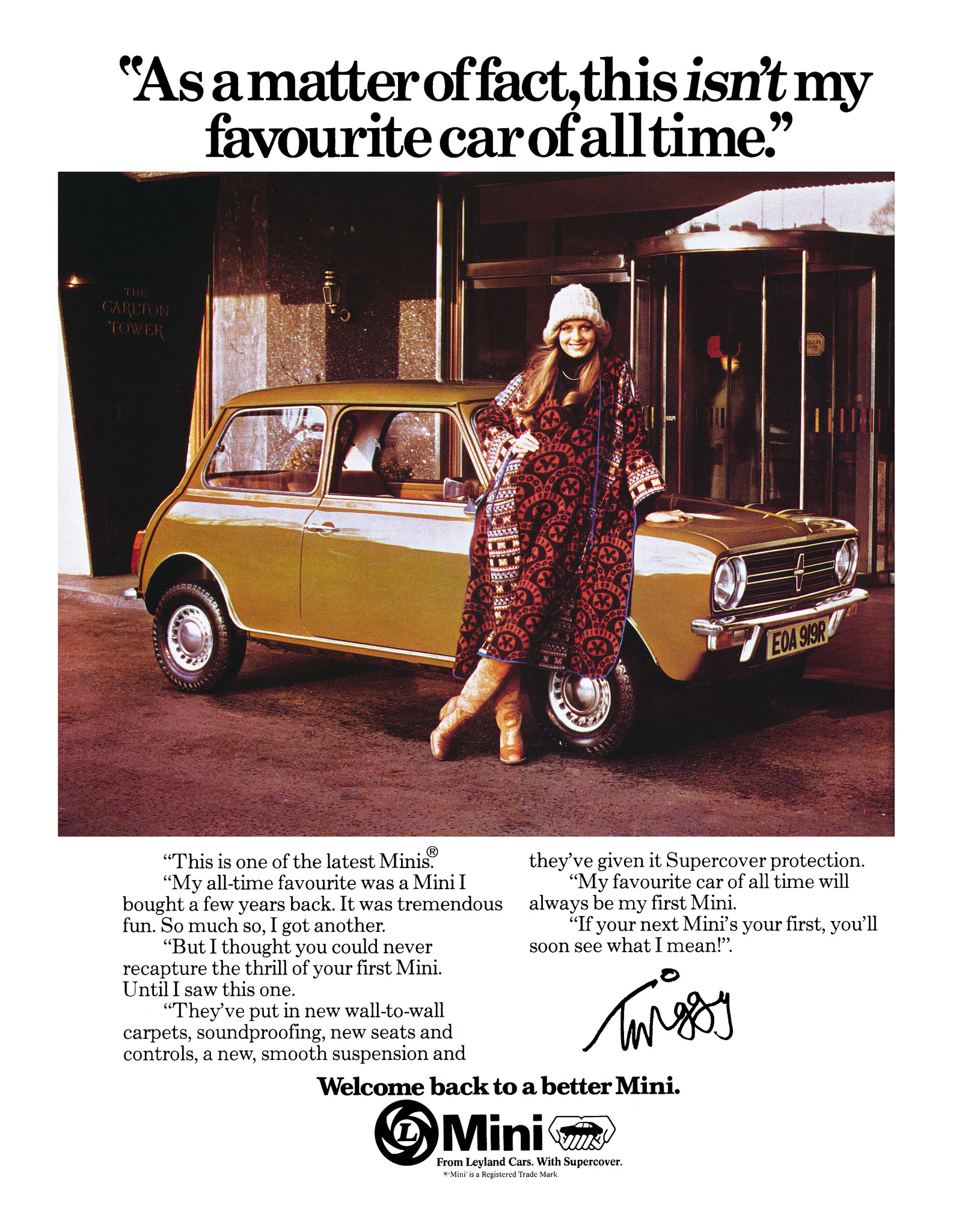 Leyland Mini ad with Twiggy from 1977. 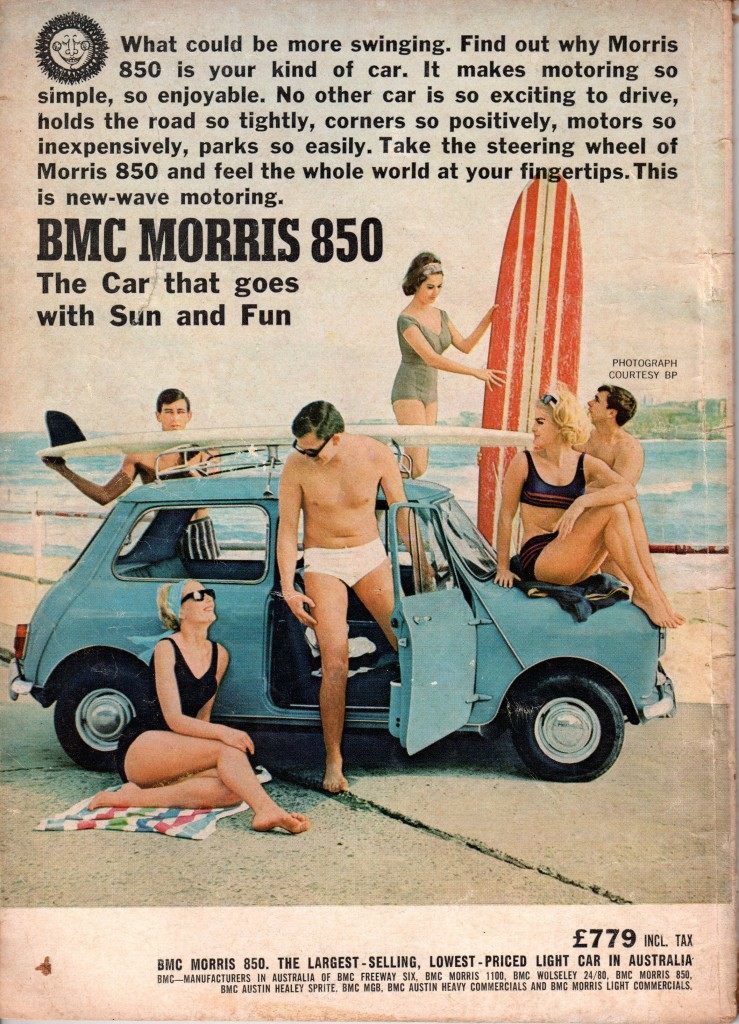 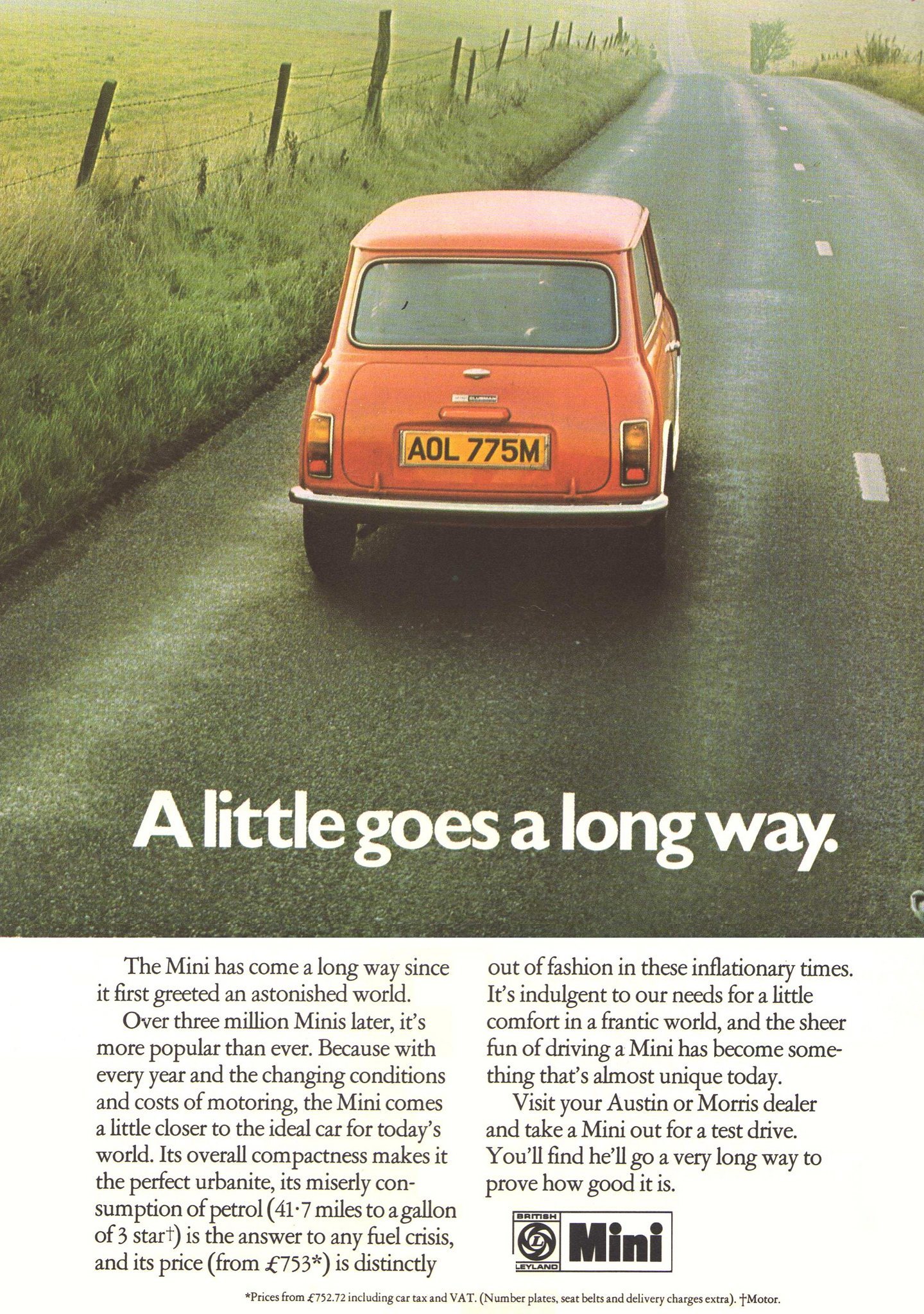 1973 BL Mini advert. I love the contrast of this with the Australian ad above. 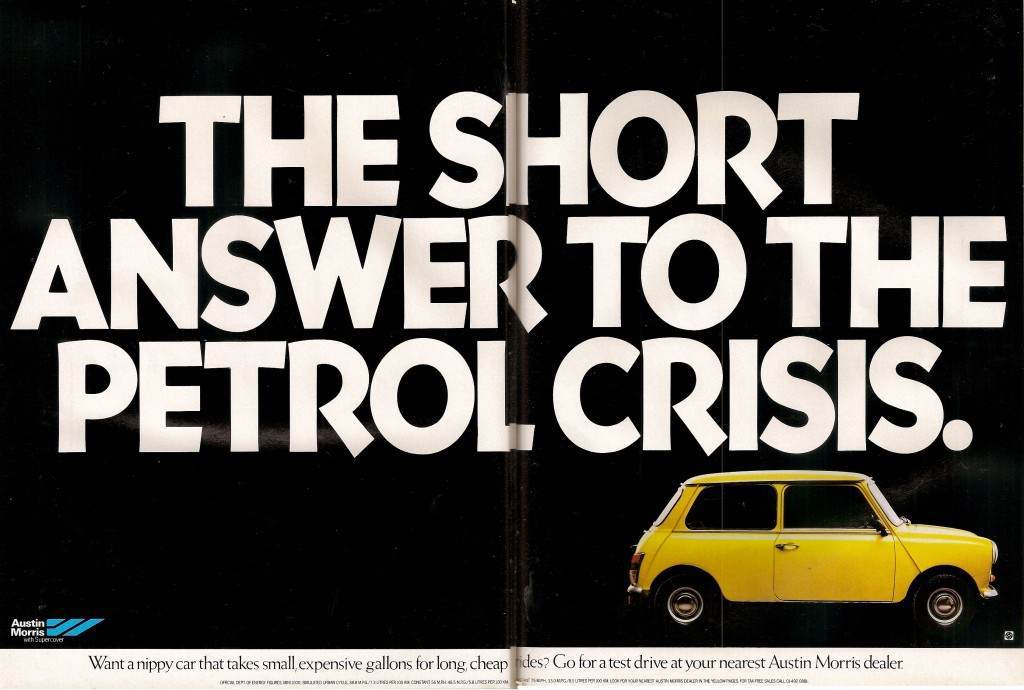 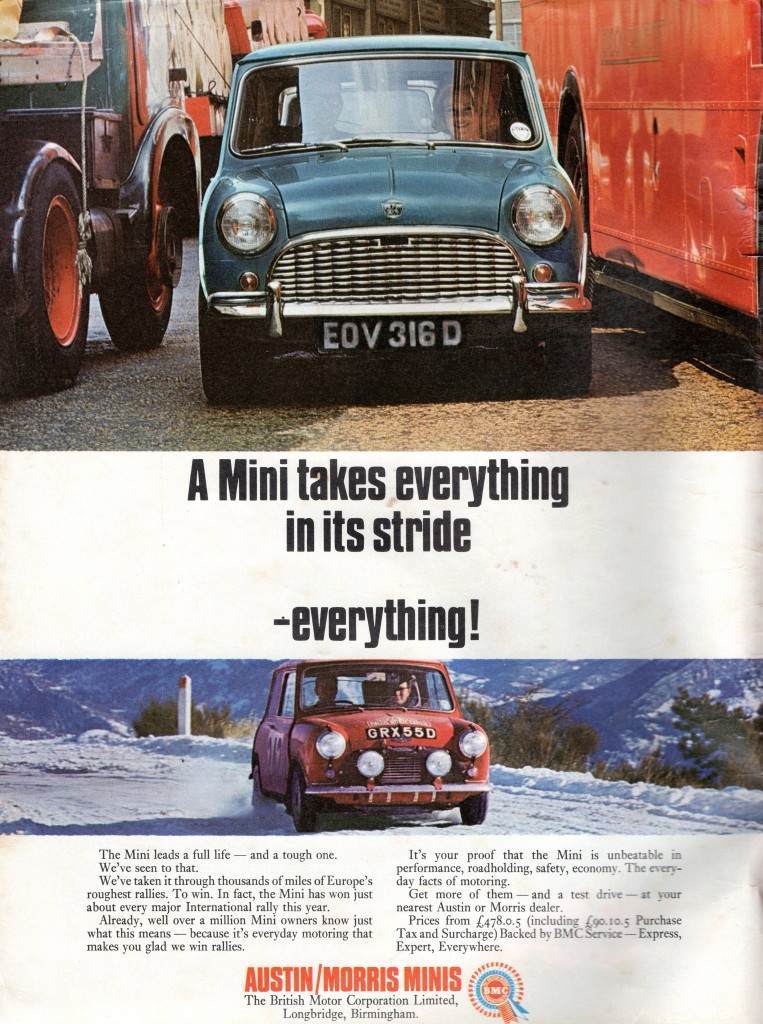 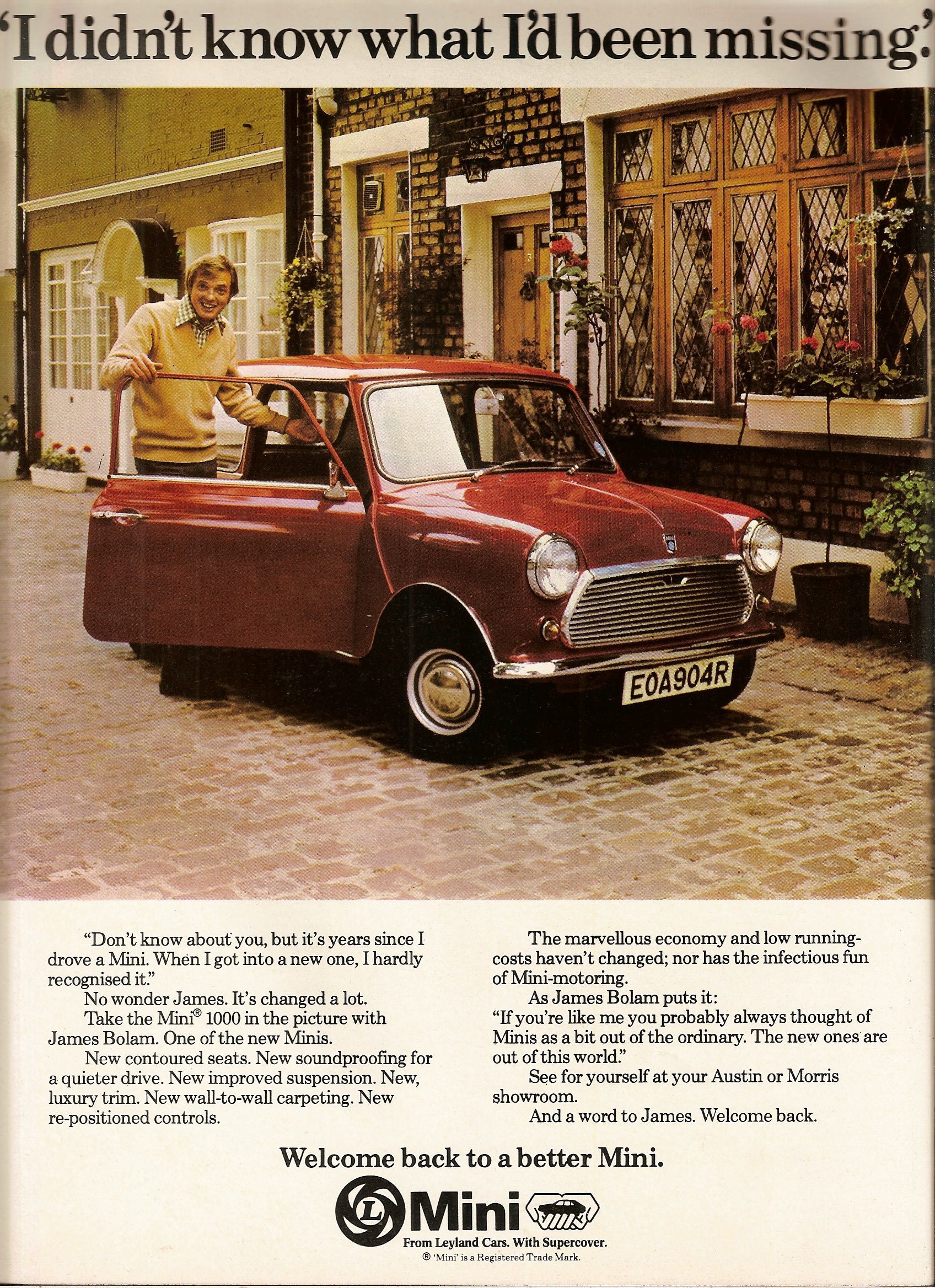 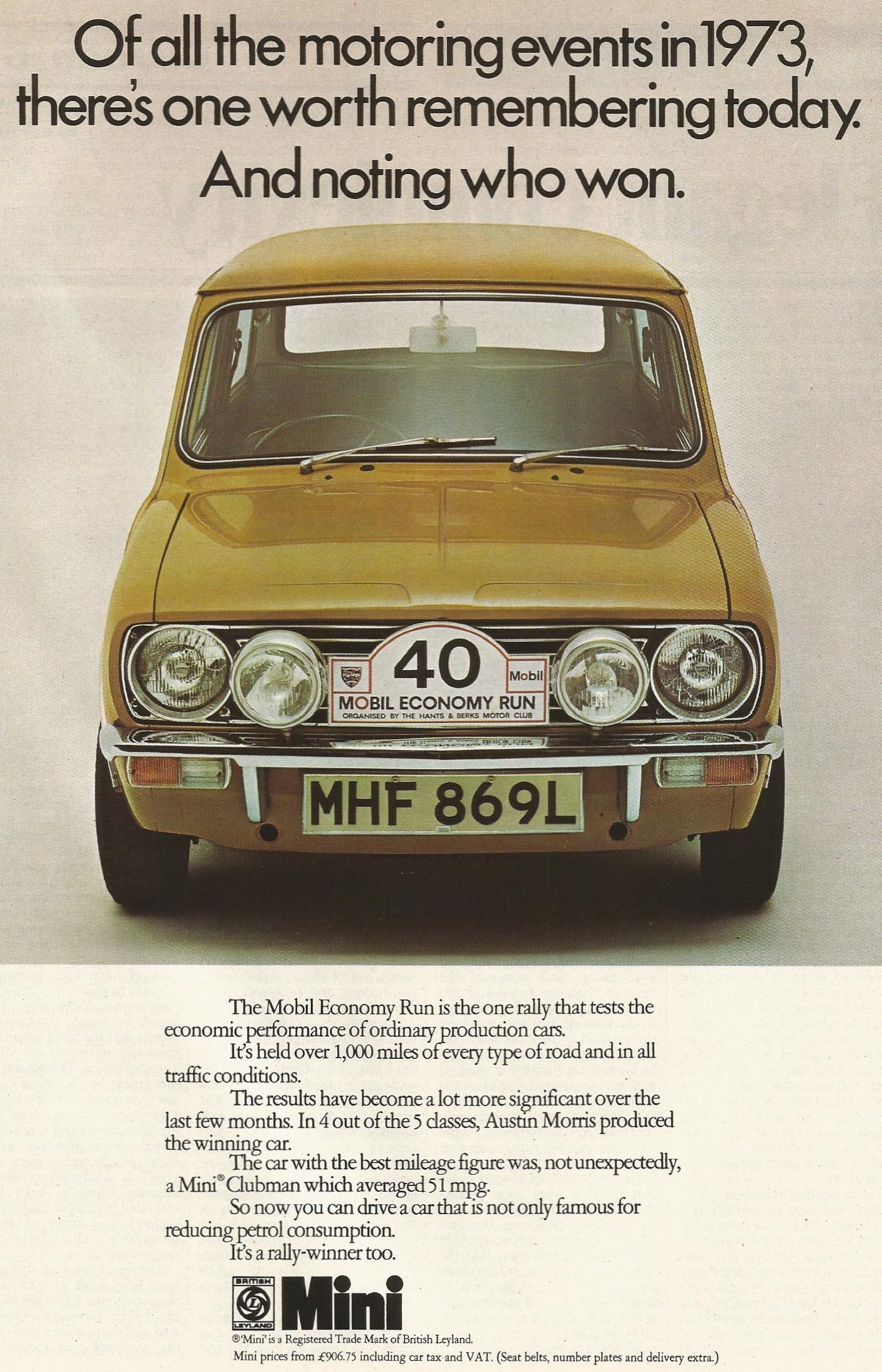 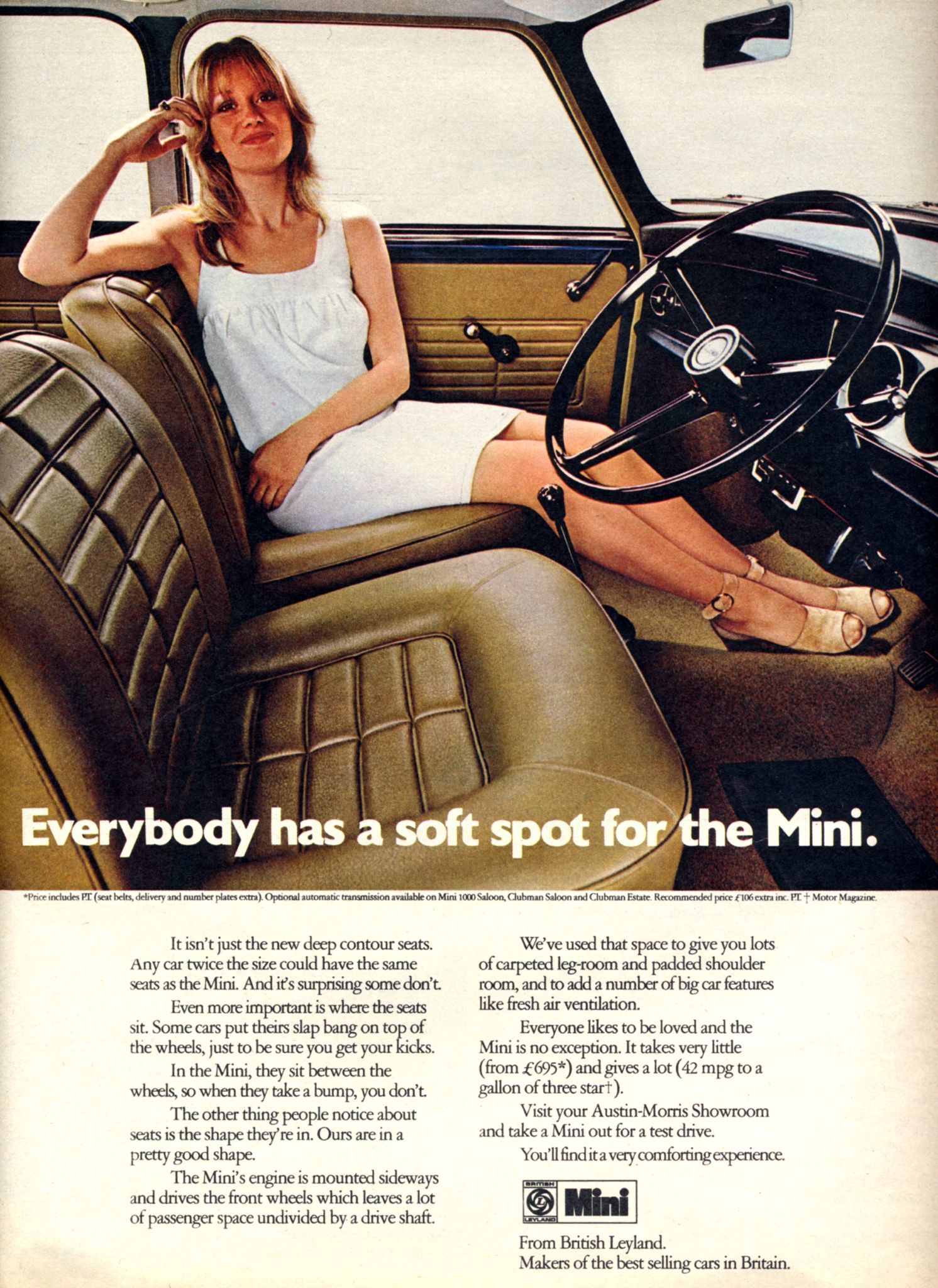 Mini ad from 1973. Either the model is very petite or it’s an extra large mini. 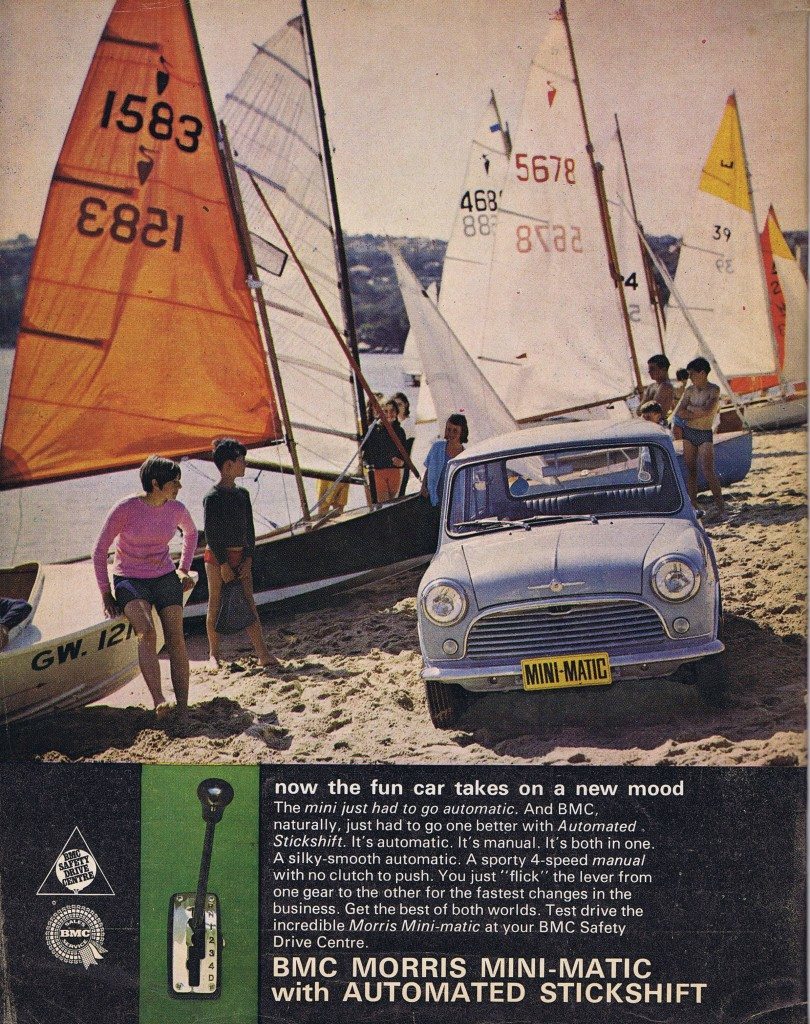 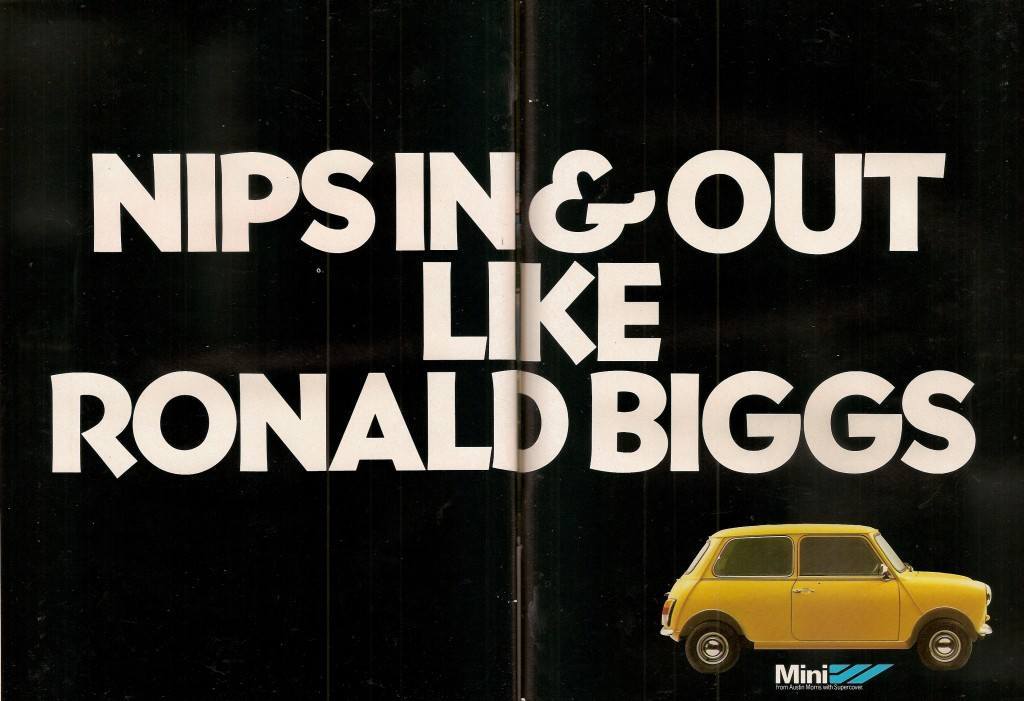 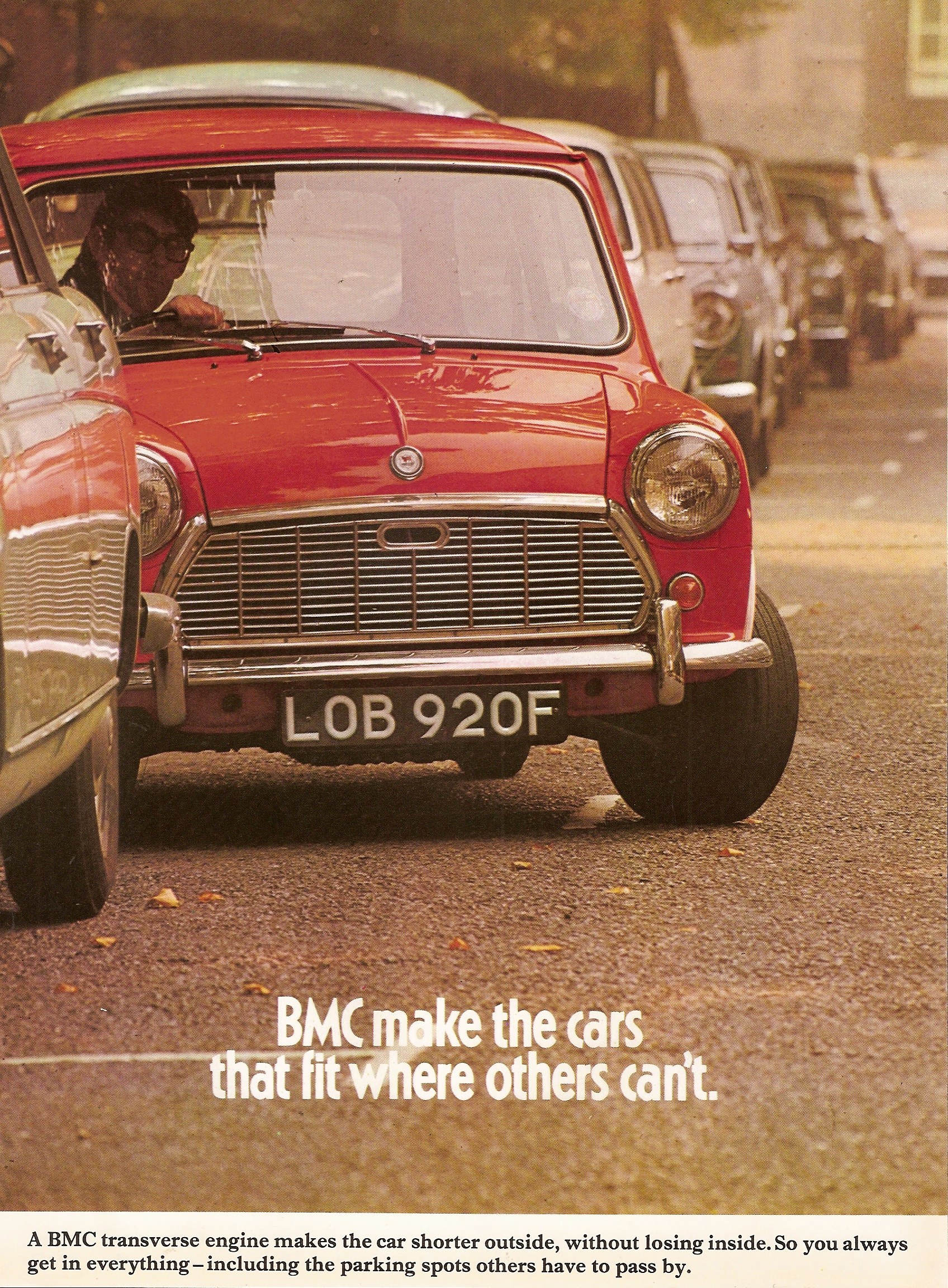 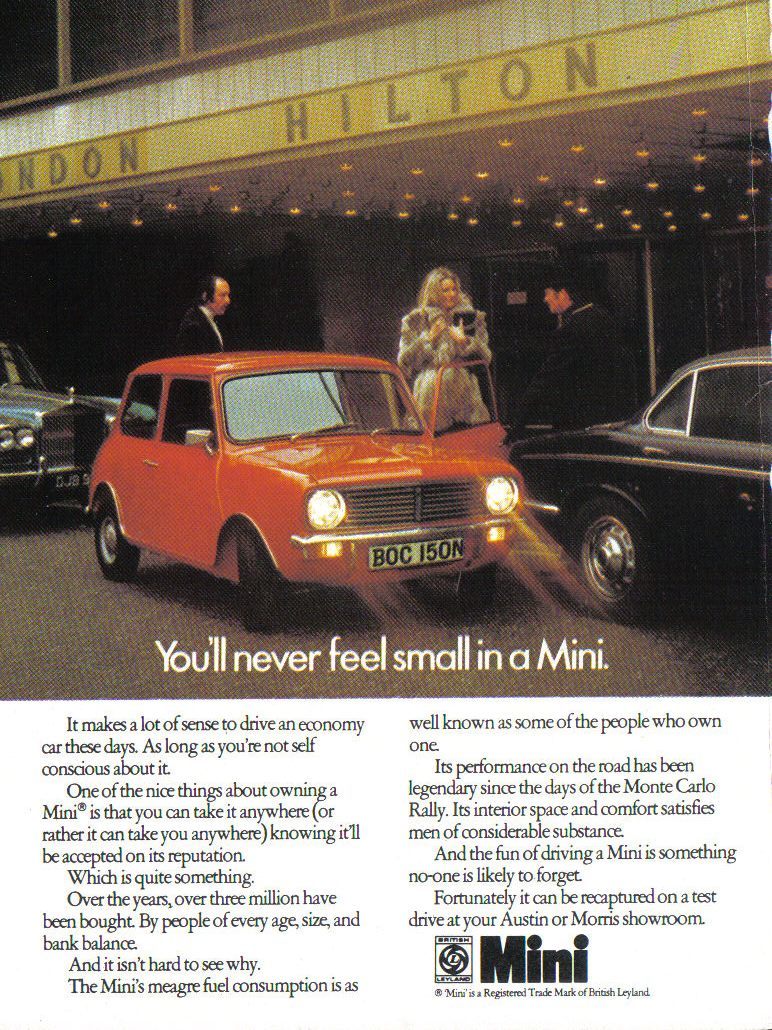 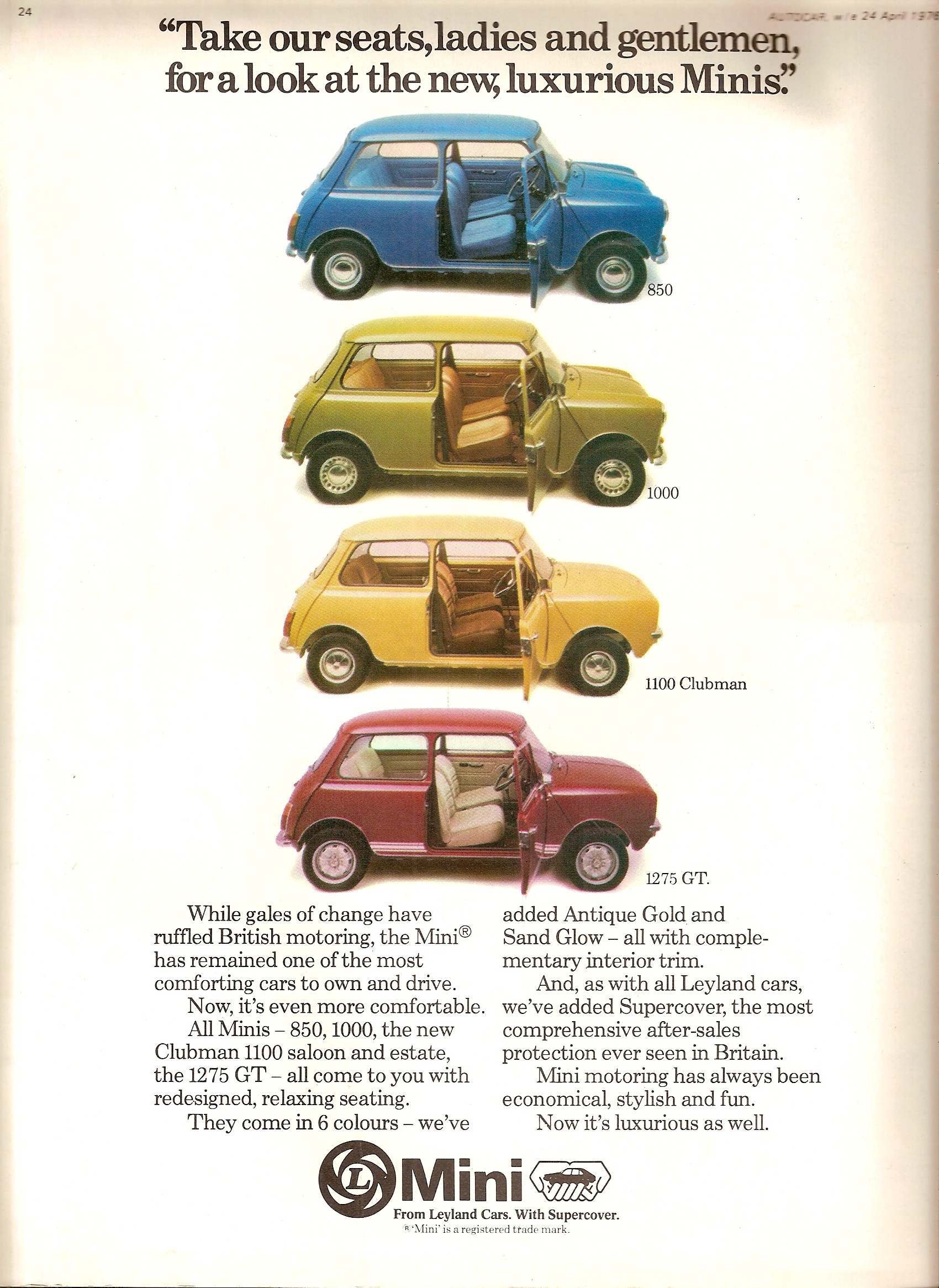 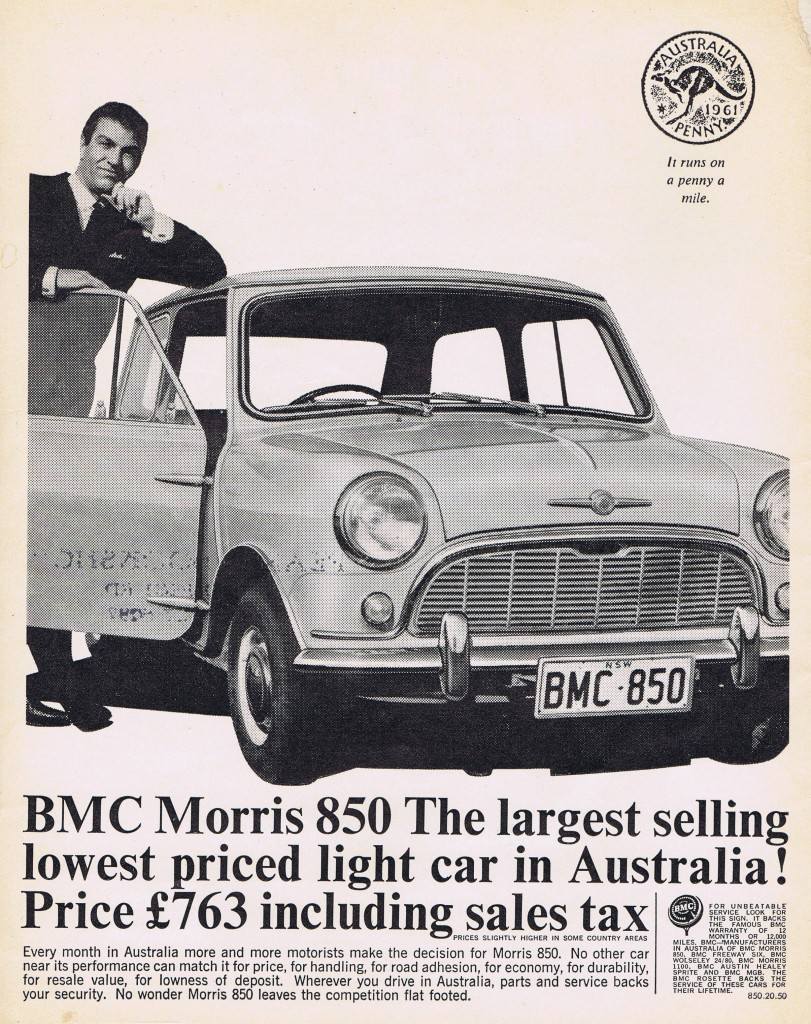 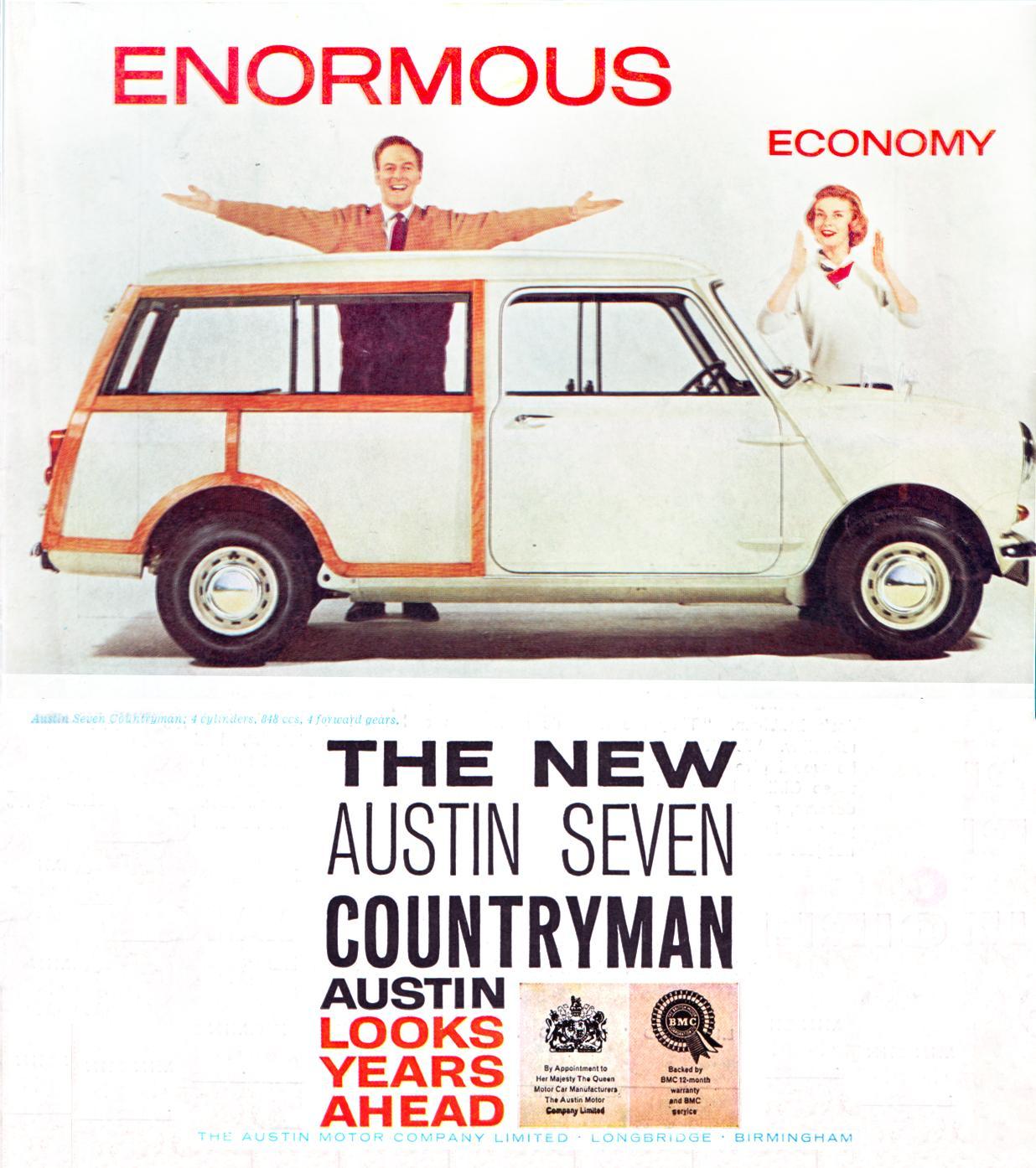 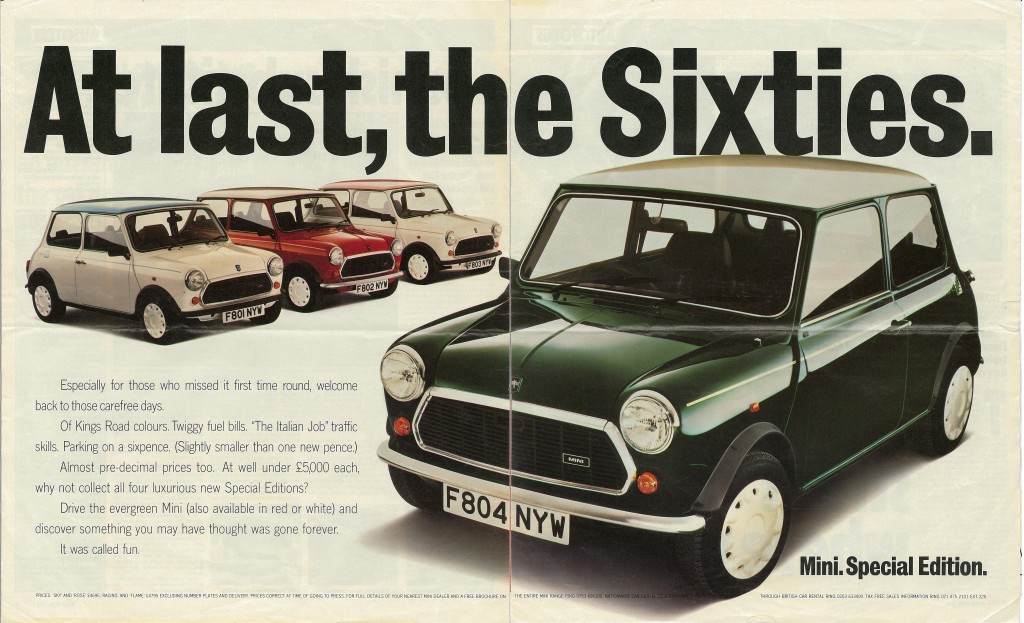 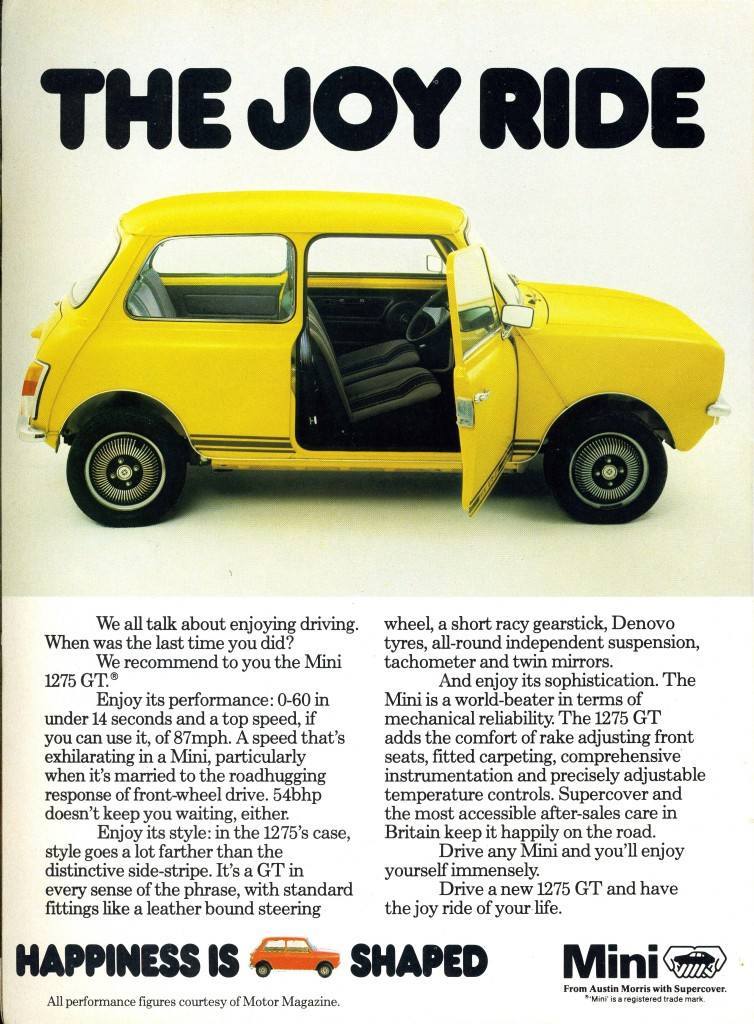 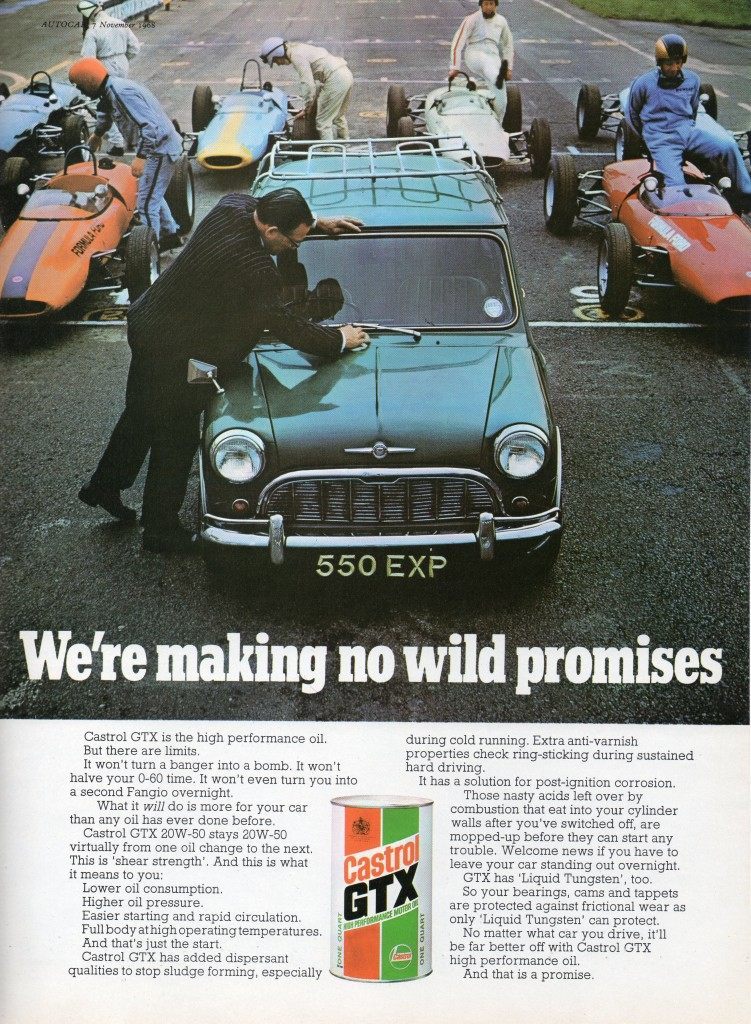 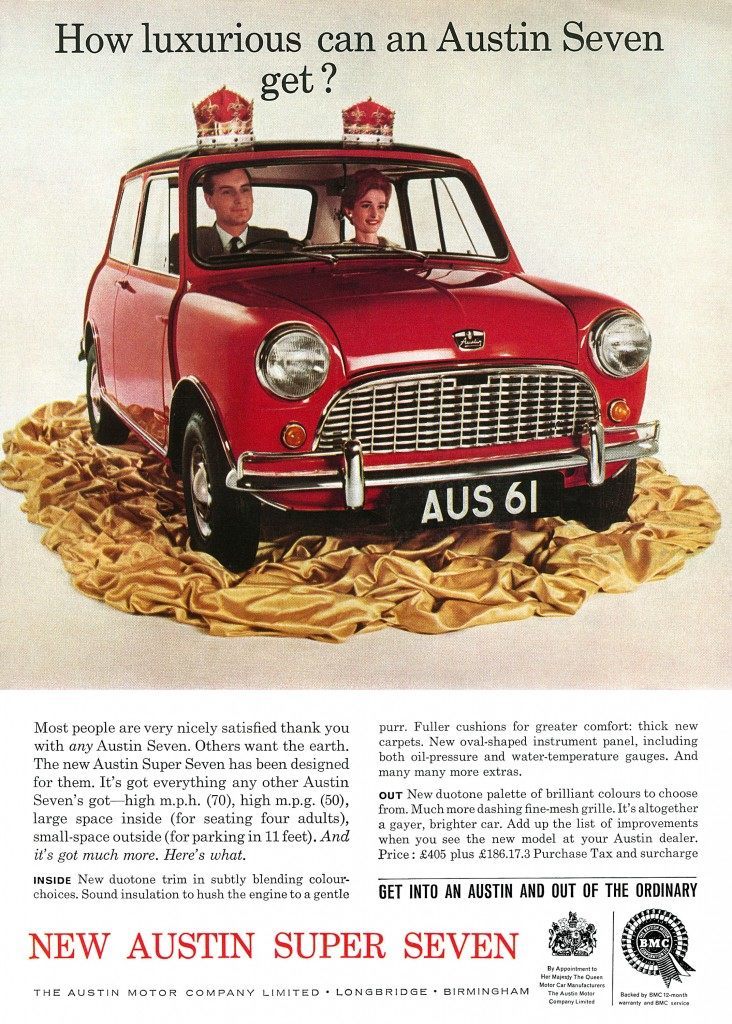 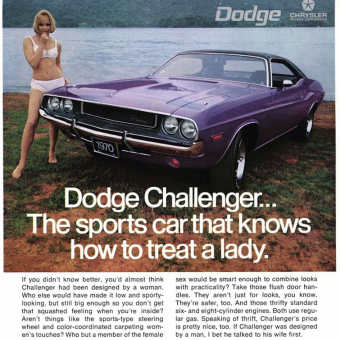 The Massive American Cars of 1970