Thanks to Mr Mondo for turning me onto Glam Idols, a goldmine of early 70s music and fashion images.

Lovingly presented and well credited, many of the photographs on the feed derive from continental European publications, like the 1972 shot above of a German model in a glitter t-shirt from Malcolm McLaren and Vivienne Westwood’s 50s outlet Let It Rock at 430 King’s Road. 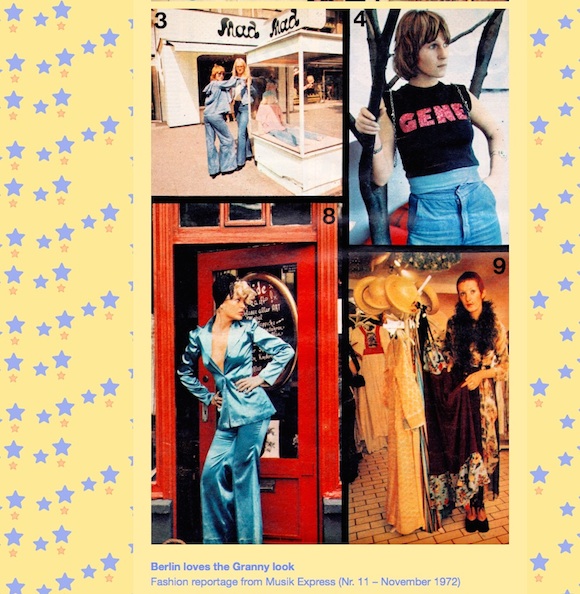 The series of shirts bearing the names of rock n roll idols were first produced for sale in the summer of 1972. The shape of the t-shirt was created by McLaren and Westwood, and based on the heavy jersey tops they sourced from East End supplier Kornbluth’s. 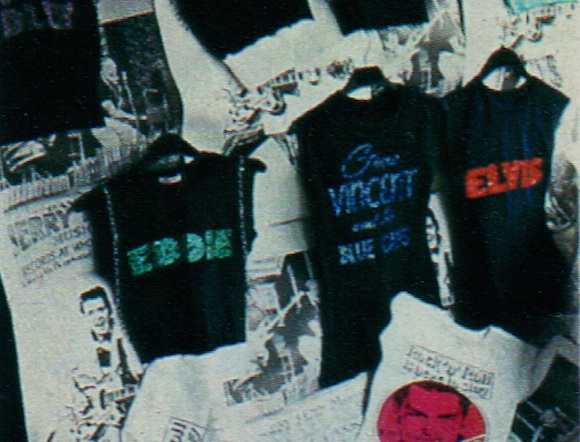 “I was freaked out by the dull cut and horrible, thick, nasty quality of their shirts,” McLaren told me in 2008. “So Vivienne tailored and customized one on my body, shortening the sleeve to make it almost capped, representing those worn by James Dean in Rebel Without A Cause, where he’d rolled his sleeve up and tucked his cigarettes in it. I wanted to capture that, and Vivienne and I worked hard to produce that effect. We also introduced a band around the midriff, sometimes in a contrasting colourway.”

Using a glitter printing technique which had been developed by 430 King’s Road’s previous occupant Trevor Myles – when he ran it as Paradise Garage – McLaren decided to bluntly print names rather than images, tapping into the iconographic aspects of original rock n roll.

Detourne-d The ‘Killer’ Rocks On! top sold at 430 King’s Road when it was trading as Too Fast To Live Too Young To Die, 1973. Courtesy Hiroshi Fujiwara Collection

These shirts were sold at 430 King’s Road over the next year, and sometimes accessorised, as in the German photograph, with studs and lavatory chains, but eventually phased out in favour of more impactful designs.

“I felt we needed to create something less pretty, more dangerous, even offensive,” said McLaren. And so he and Westwood set to it, producing t-shirts with nipple zips, coloured vinyl cels containing nudie pictures, tyre-track marks and slogans which were sold under the Too Fast To Live Too Young To Die umbrella.

Keep up with Mr Mondo at Planet Mondo here.