To mark the gig at central London venue The Marquee by the Sex Pistols which generated their first substantial media coverage, a prescient 200-word review by Neil Spencer on page 31 of the February 21, 1976 issue of the New Musical Express.

The article – illustrated by an uncredited Mick Rock portrait of John Rotten performing at the Pistols’ gig at Chelsea Art School on December 5 1975 – stuck out like a sore thumb at the time. 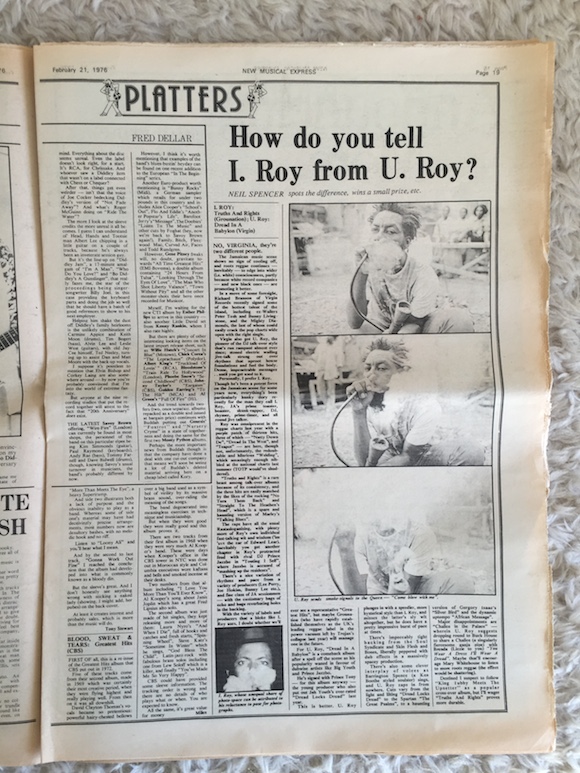 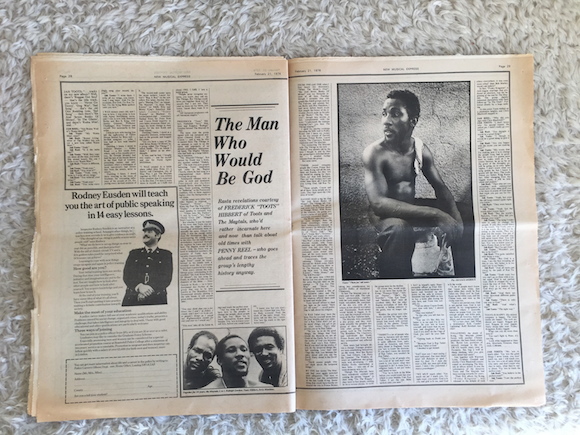 This editorial was leavened by two chunks of the paper dedicated to reggae: assistant editor Spencer’s reviews of new releases by I-Roy and U-Roy (the latter gracing the back page with poetic ad copy by ‘Lynton Johnson’ – presumably Linton Kwesi Johnson) and an interview with Toots Hibbert on his and the Maytals’ new record, Reggae Got Soul (which I bought on the strength of Penny Reel’s text). 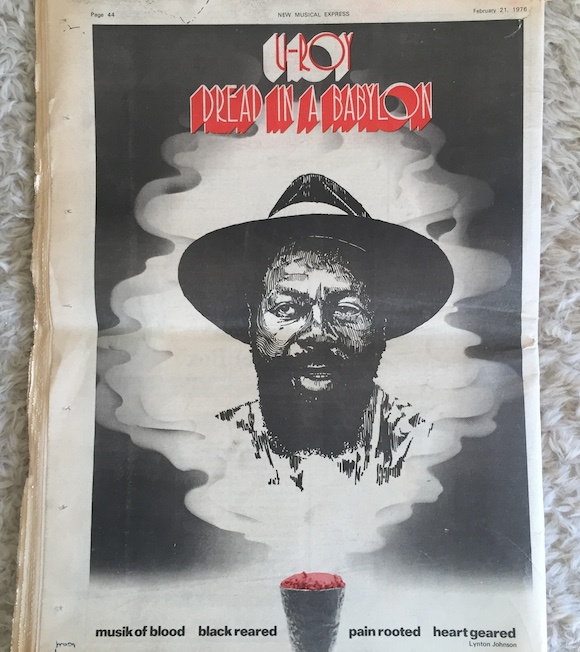 When I interviewed Spencer for my music press history In Their Own Write in 2001, he told me that he had been alerted to the Pistols’ existence by the NME’s Tony Tyler, who had encountered them at the tail end of the previous year at a dance at Queen Elizabeth College. In fact the late Tyler’s partner and fellow NME contributor Kate Phillips had given the group their first media mention, as I have previously noted here.

“Tony and I went to see the Pistols supporting Eddie And The Hot Rods and the doorman said: ‘You’d better get in their quick, they’re busting the place up’,” Spencer recalled of the night of February 12 in ITOW. “I opened the door and a chair sailed across the room and crash-landed. There were only about 20 people there, but it was immediately obvious that something fantastic was going on. They didn’t look like anyone I’d ever seen.” 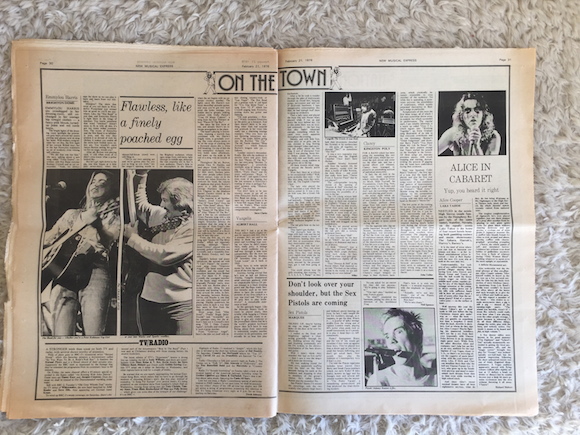 PP30-31: Live review section dominated by a Steve Clarke piece on Emmylou Harris at the Brighton Dome, with Barry Miles on Vangelis at the Albert Hall, Clancy at Kingston Poly by John Tobler, Richard Meltzer on Alice Cooper at Lake Tahoe and, of course, Spencer’s Pistols article

Blessed with a suitably declamatory headline by NME sub-editor and writer, the late Ian MacDonald, Spencer’s review ended with the utterance from guitarist Steve Jones that the group was more interested in chaos than music. And so the touchpaper was lit.

From that point, with the energetic PR input of manager Malcolm McLaren, the Pistols became as much a media as a musical phenomenon.

For example, the Thrills gossip column in the following week’s NME noted that they had been sacked from a series of support spots for Eddie & The Hot Rods over their antics at The Marquee. However, aside from snippets in Thrills and the news pages, the paper did not follow up with interviews with the group and soon lost momentum to its weekly rivals in coverage of the group and punk in general. In fact, the next substantial space dedicated to the Pistols was eight months later in October 1976, when they shared a cover with Dr Feelgood. 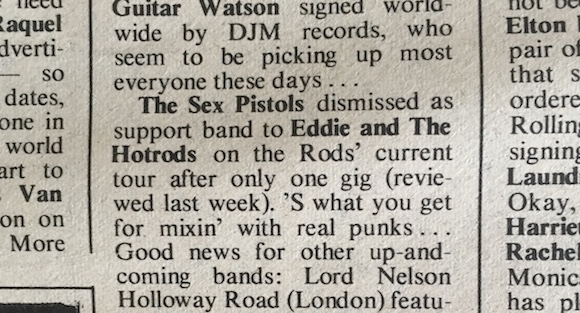 Snippet in the Thrills column of the next week’s issue, NME, February 28, 1976

The release of the Anarchy In The UK single was given a cool reception in the form of a limp down-page review by Cliff White and it wasn’t until the so-called Grundy affair in December that the group was granted its own NME cover, quite some time after Sounds – where John Ingham had championed the group from April onwards – and Melody Maker, where Caroline Coon broke down the male-dominated resistance to the new musical form a few weeks later.

NME’s difficulties with punk in general were exacerbated by the attitude of the Pistols and their set towards former fellow traveller and NME star writer Nick Kent, who had physically assaulted his girlfriend Chrissie Hynde in McLaren’s shop Sex at 430 King’s Road. This was the reason behind Sid Vicious’s violent altercation with Kent during September’s 100 Club Punk Festival.

In hindsight, the recruitment in this period to the NME of Julie Burchill and Tony Parsons – two young writers capable of reporting on the fast-moving scene – was crucial to the publication’s survival as UK music’s leading taste-maker. “NME was having difficulty covering this stuff. The other papers had stolen the march because the passion for the music wasn’t there,” Parsons said when I interviewed him for ITOW.

With this pair on board, the NME was restored to the pole position as the must-read on punk and other exciting new music.

To mark of the importance of Spencer’s review and the anniversary of The Marquee gig is the publication date of Punk London: In The City 1975-78, my map collaboration with Herb Lester Associates.

With 111 addresses and a 28pp companion booklet, copies of the map are available at £6 each from here.

I waded to the front and straightway sighted a chair arcing gracefully through the air, skidding across the stage and thudding contentedly into the PA system, to the obvious nonchalance of the bass drums and guitar.

Well I didn’t think they sounded that bad on first earful – then I saw it was the singer who’d done the throwing.

He was stalking round the front rows, apparently scuffing over the litter on the floor between baring his teeth at the audience and stopping to chat to members of the group’s retinue. He’s called Johnny Rotten and the moniker fits.

Sex Pistols? Seems I’d missed the cavortings with two scantily clad (plastic thigh boots and bodices) pieces dancing up front. In fact, I only caught the last few numbers; enough, as it happens, to get the idea. Which is… a quartet of spiky teenage misfits from the wrong end of Various London roads, playing 60’s styled white punk rock as unself-consciously as it’s possible to play these days i.e. self-consciously.

Punks? Springsteen Bruce and the rest of ‘ em would get shredded if they went up against these boys. They’ve played less than a dozen gigs as yet, have a small but fanatic following, and don’t get asked back. Next month they play the Institute of Contemporary Arts if that’s a clue.

I’m told the Pistols repertoire include lesser known Dave Berry and Small Faces numbers (check out early Kinks’ B sides leads) besides an Iggy and the Stooges item and several self-penned numbers like the moronic “I’m pretty vacant’, a meandering power-chord job that produced the chair-throwing incident.

No-one asked for an encore but they did one anyway: “We’re going to play ”Substitute'”.

“So what?” countered the bassman, jutting his chin in the direction of the bewildered Frog.

That’s how it is with the Pistols – a musical experience with the emphasis on Experience.

“Actually we’re not into music,” one of the Pistols confided afterwards.