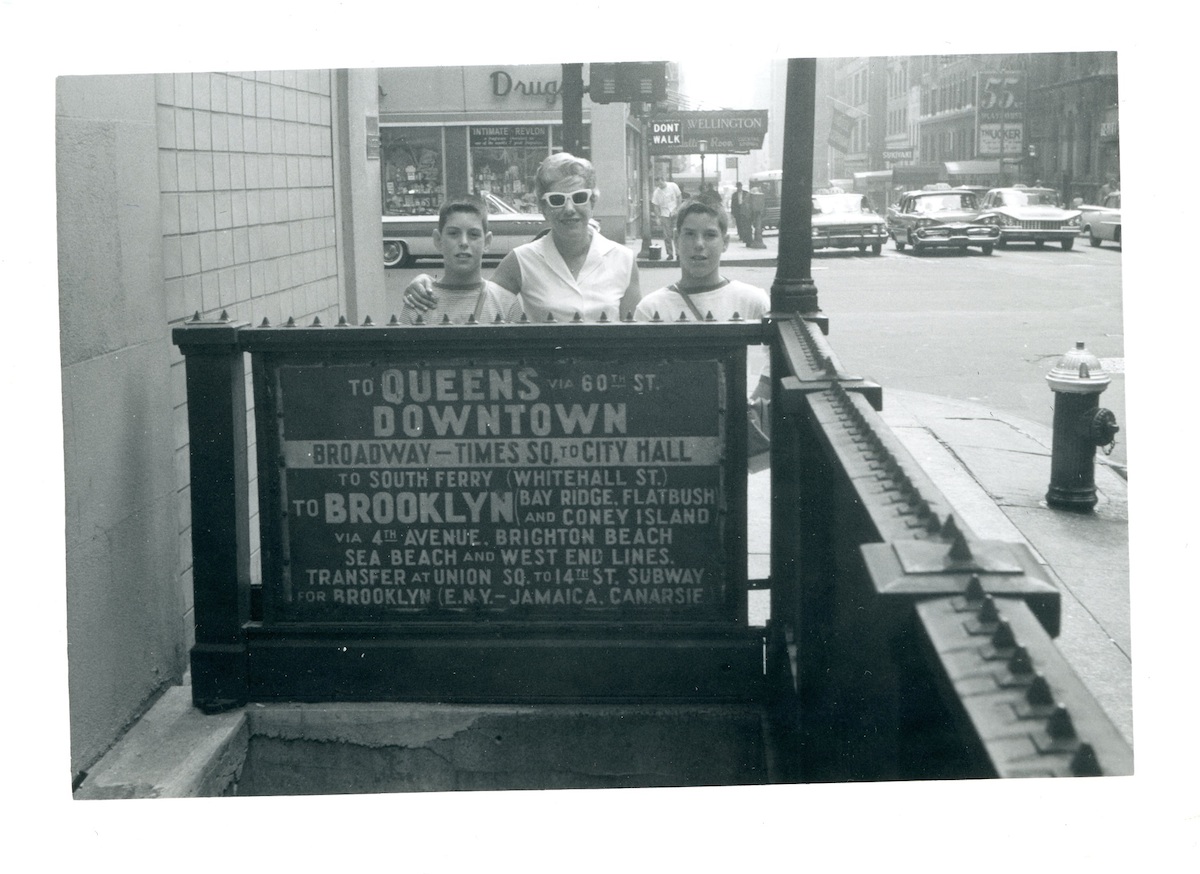 Preparing to leave Manhattan for the subway journey to Coney island, our travelers pose at an entrance to the 57th Street Station of the BMT Line. This entrance is located on the northwest corner of 7th Avenue and West 55th Street. In the distance directly behind the trio is the 55th Street entrance to the Hotel Wellington. The marquee of the 55th Street Playhouse, which was famous in some circles and infamous in others, is visible across the street from the hotel.

This small group of found photographs was provided by collector Christopher Jordan. Unfortunately, there was no identifying or date information accompanying the group. We will never know if this was a group of tourists staying in a Manhattan hotel or a family of Manhattanites exploring the iconic sites of their city. We can, however, enjoy these snapshot memories of their day. 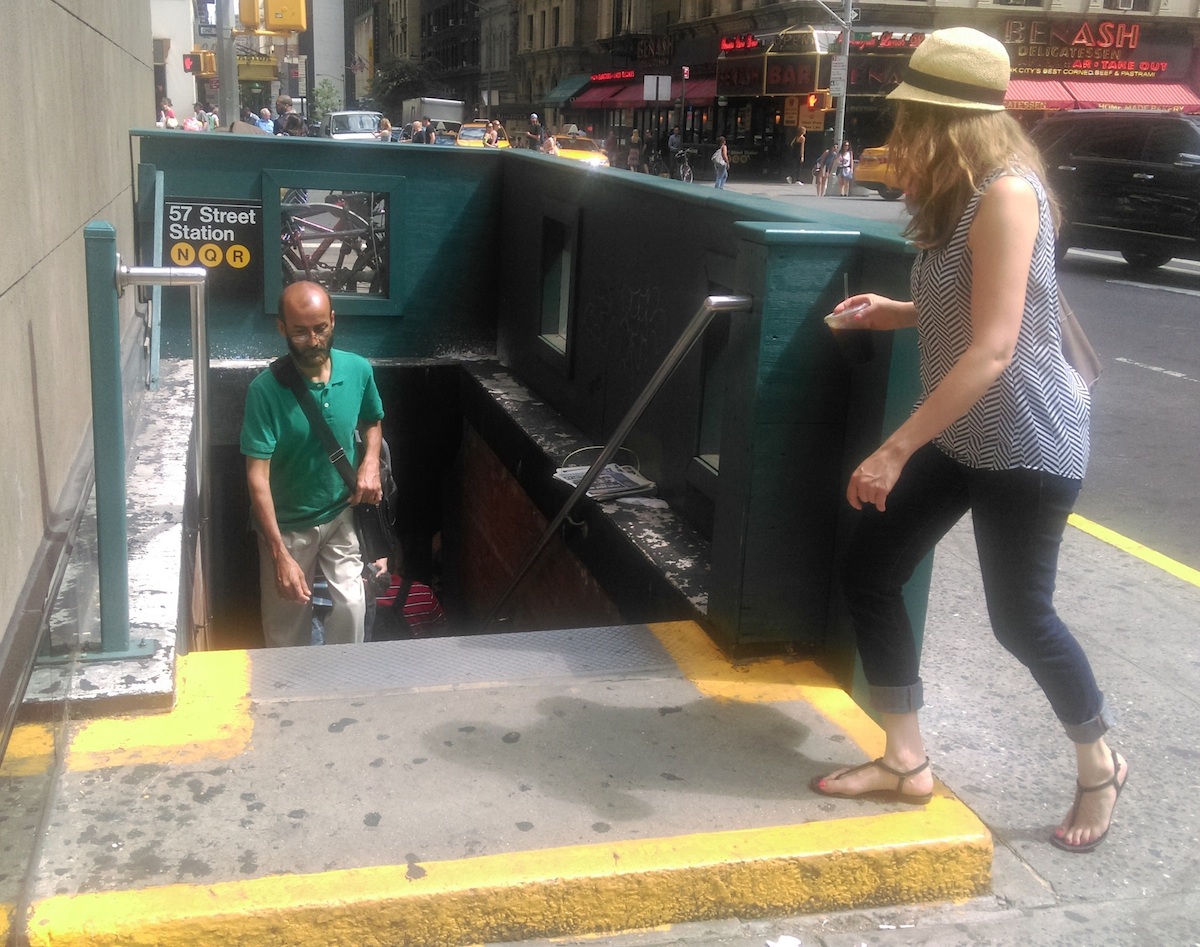 The same entrance in August 2015. The viewer will find the gold-colored marquee of the Hotel Wellington just above the pedestrian in the light blue shirt. The 55th Street Playhouse was housed in the gray building mid-block on the opposite side of the street. Image courtesy of Jim Henderson 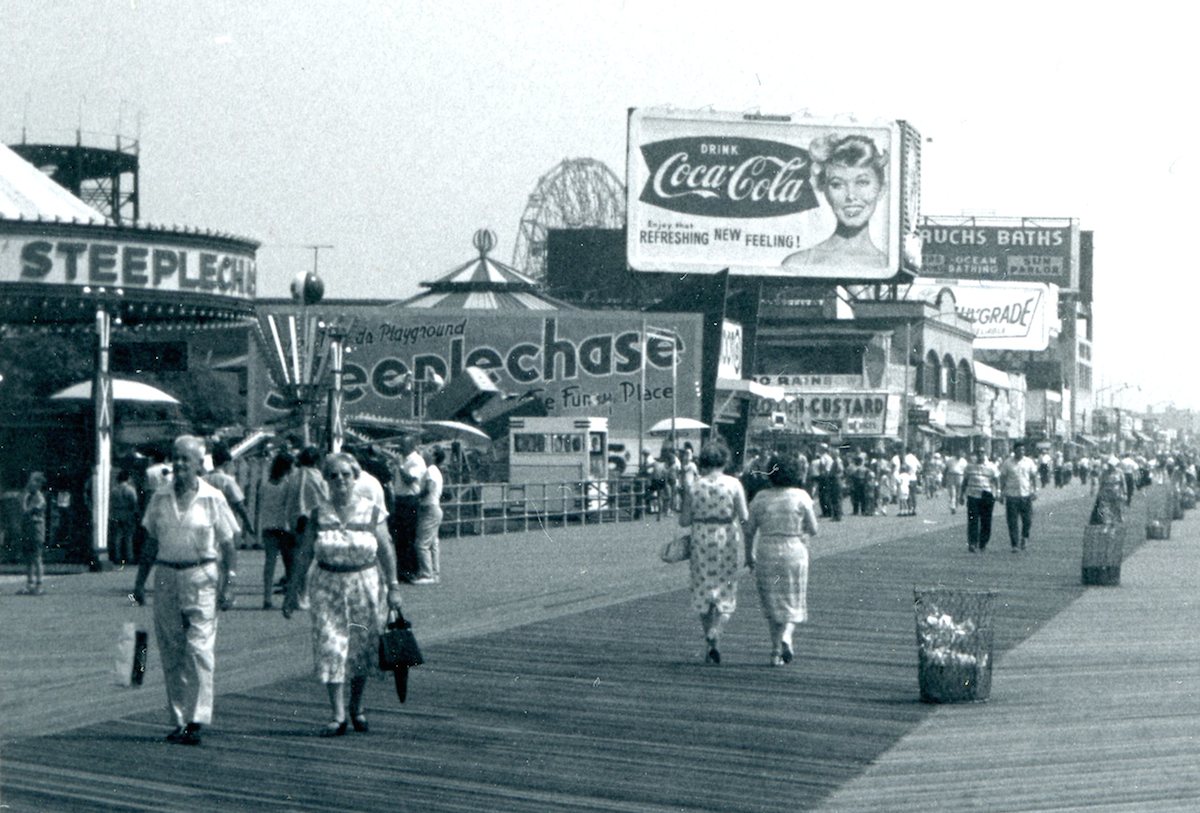 A view looking down the Coney Island boardwalk, along with a cropped closeup of some of the signage. Opened in May 1923, it rises 14 feet above the beach, is 80 feet in width, and stretches for 2.7 miles. 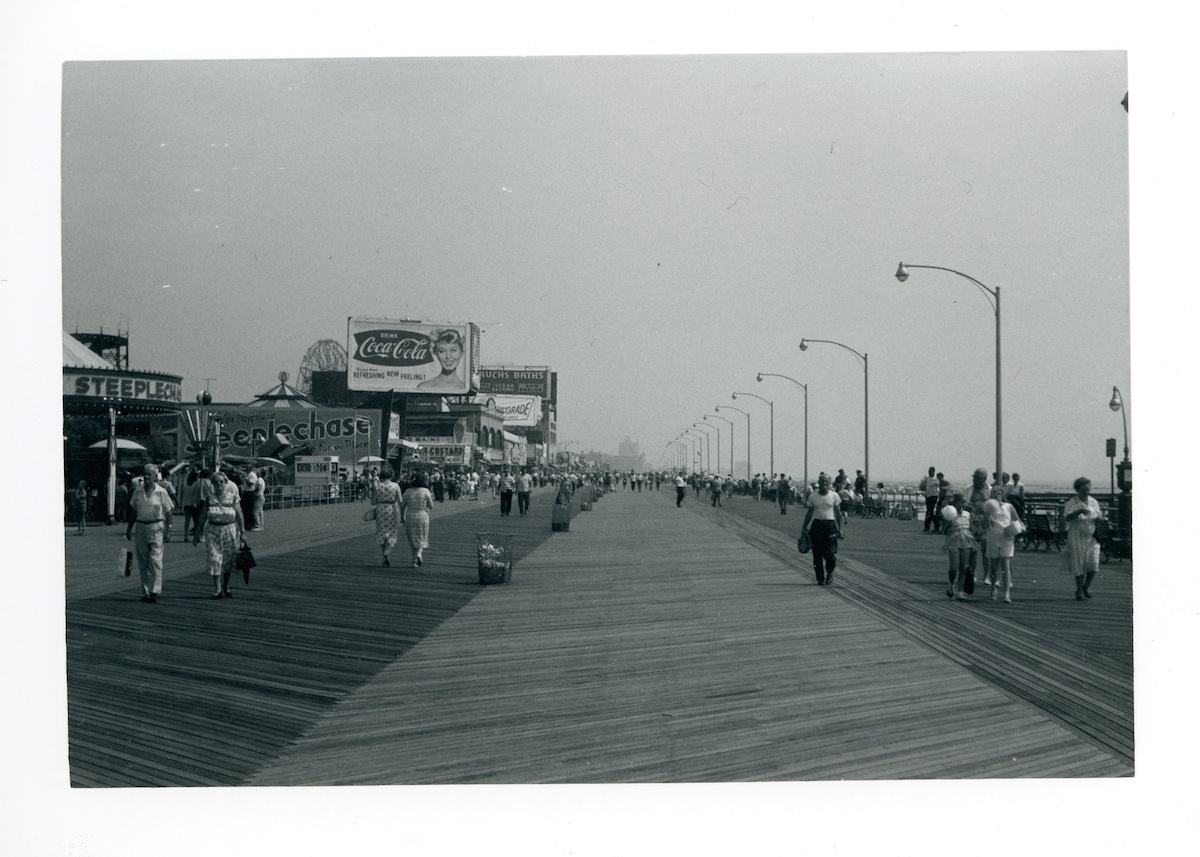 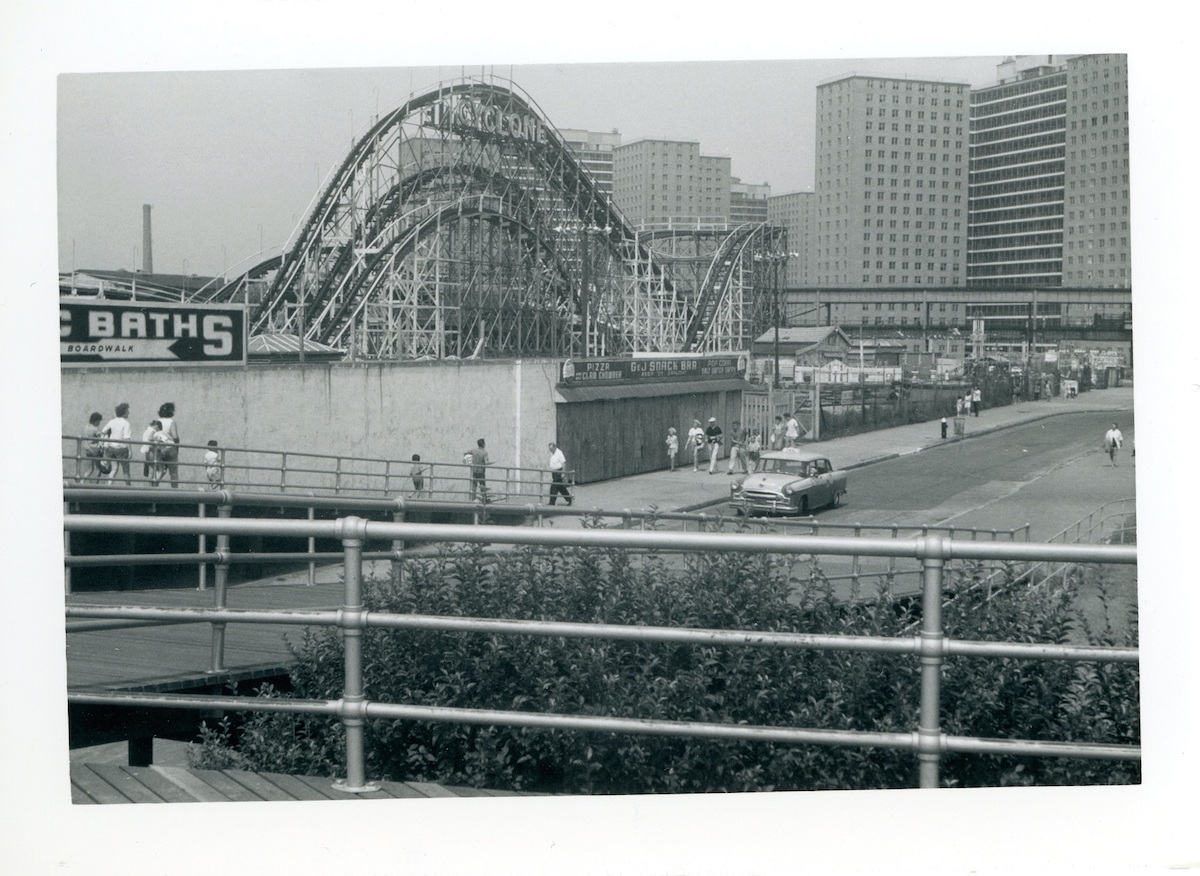 The iconic Cyclone wooden roller coaster celebrated its 90th birthday on June 26, 2017. It was the third of a trio of famous Coney Island coasters, following the Thunderbolt (1925) and the Tornado (1926). Of the three, the Cyclone alone survives. It was declared a city landmark in 1988 and a National Historic Landmark in 1991. 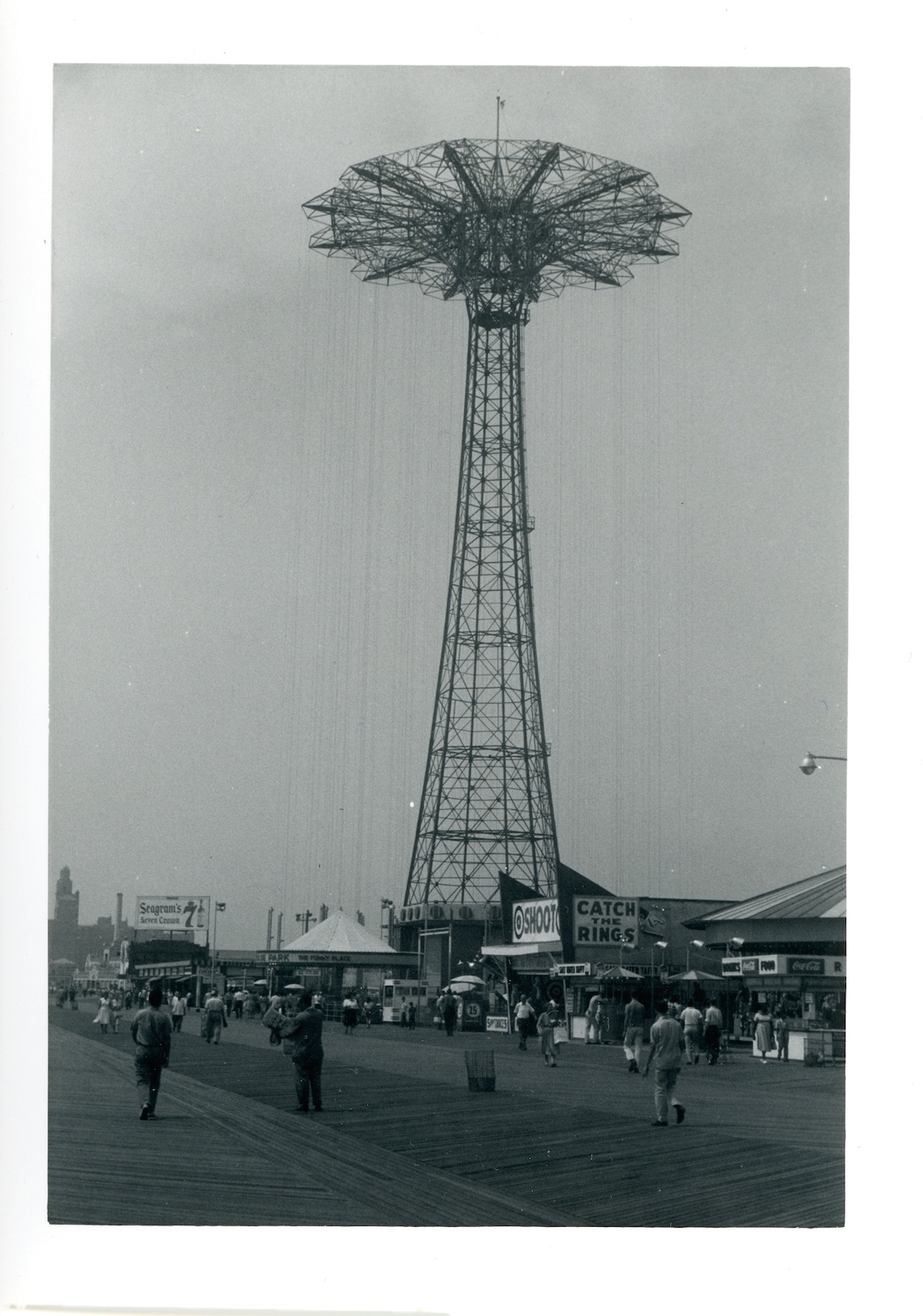 The 262-foot-high Parachute Jump was originally erected at the 1939-40 New York World’s Fair in Flushing Meadows, Queens. It was moved to Steeplechase Park in Coney Island in 1941. Its operation is described on the New York City Parks webpage regarding the history of Steeplechase Park, “…The six-sided steel tower holds twelve drop points, accessible by six-foot steel arms. Each parachute had a seat for two hanging beneath it; riders were lifted by a cable to the top of the tower, then dropped, floating gently to the ground. Climbing to the top took roughly a minute; the descent lasted between ten and fifteen seconds.” The ride ceased operation in 1964. The Coney Island History Project organization has noted that no deaths or serious injuries occurred on the ride. In 1980 the Jump was placed on the National Register of Historical Places. In 1989, it was designated a City landmark. 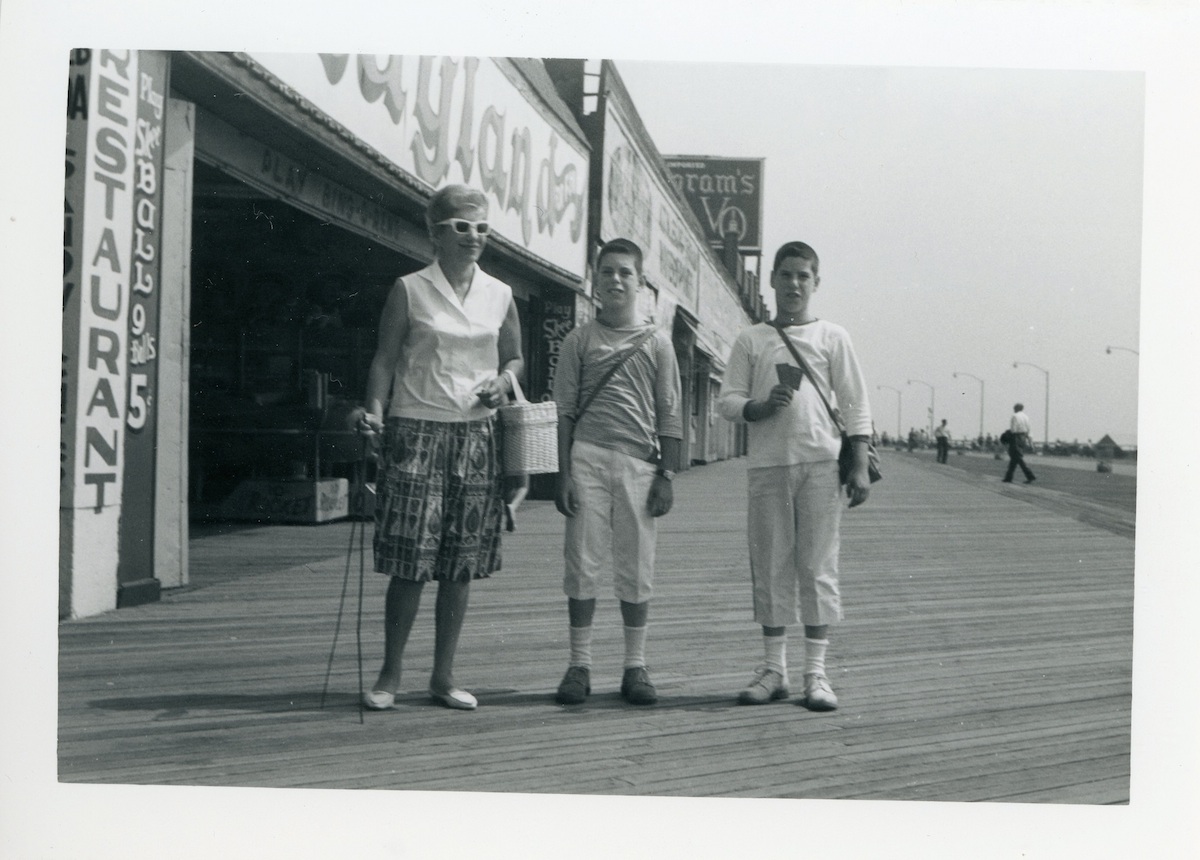 Pausing outside the Playland arcade. 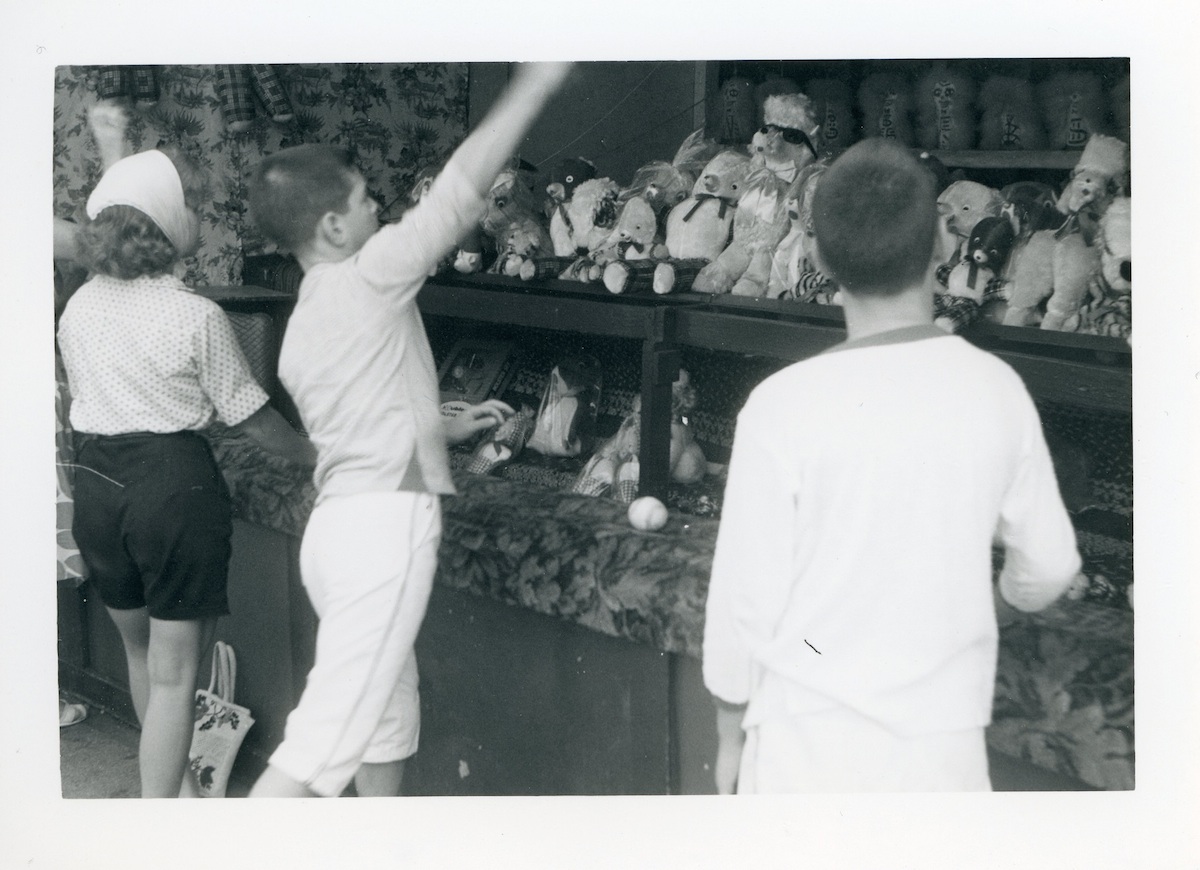 Taking up the challenge at the “Knock Down the Cat” game, wherein the player threw baseballs to try to knock over painted cat dolls which can be seen in the upper right rear. These dolls were hand painted canvas with a fringed edge to resemble fur and were attached to a wooden base. Today, the original dolls, if authenticated, are highly collectible. 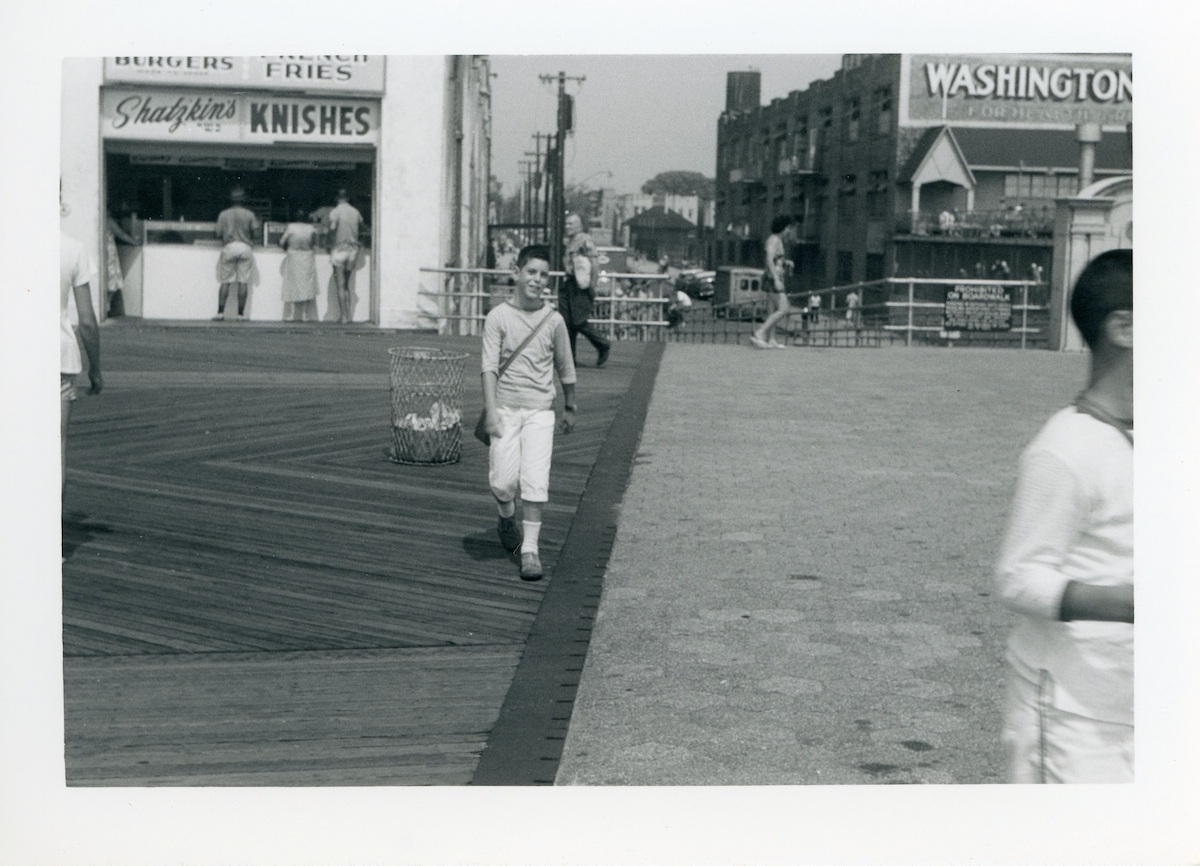 By the mid 20th Century, Brooklyn was well known for its knishes–considered by some as the greatest in “Jewish comfort food.” Shatzkin’s in Coney Island, along with Hirsch’s and Mrs. Stahl’s in Brighton Beach, were a few of the most well-known knisheries, each with its own legion of loyal fans. Here we see Shatzkin’s on the Coney Island boardwalk. 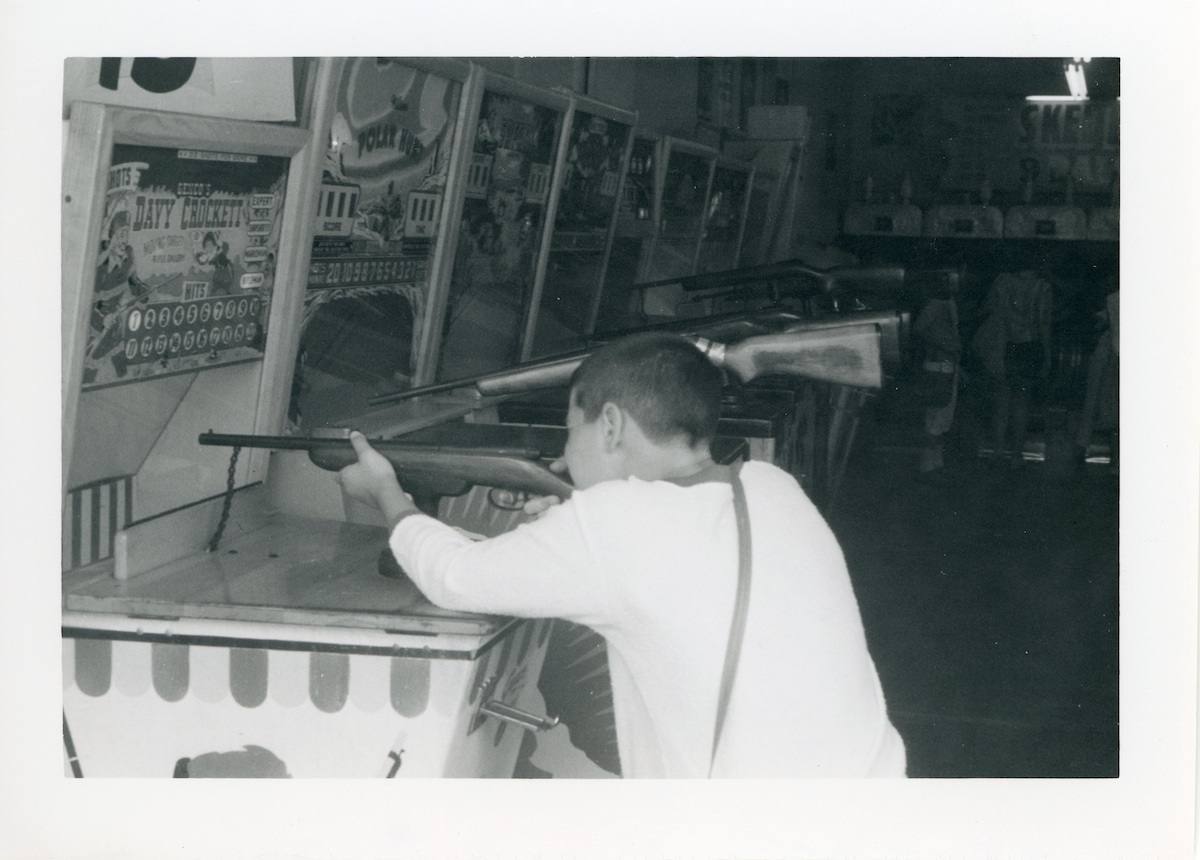 Playing the “Davy Crockett Moving Target Rifle Gallery” by Genco, introduced in 1956. Targets were an Indian who moved to and fro daring the shooter to shoot him in the nose, with closer targets of birds and foxes. A bell ring signaled each hit. After ten shots the game reset all targets. There were twenty shots total, after which the game pronounced the player’s marksmanship–Rifleman, Marksman, Sharpshooter, or Expert based on the number of hits out of twenty. Note the people playing skee ball in the rear. 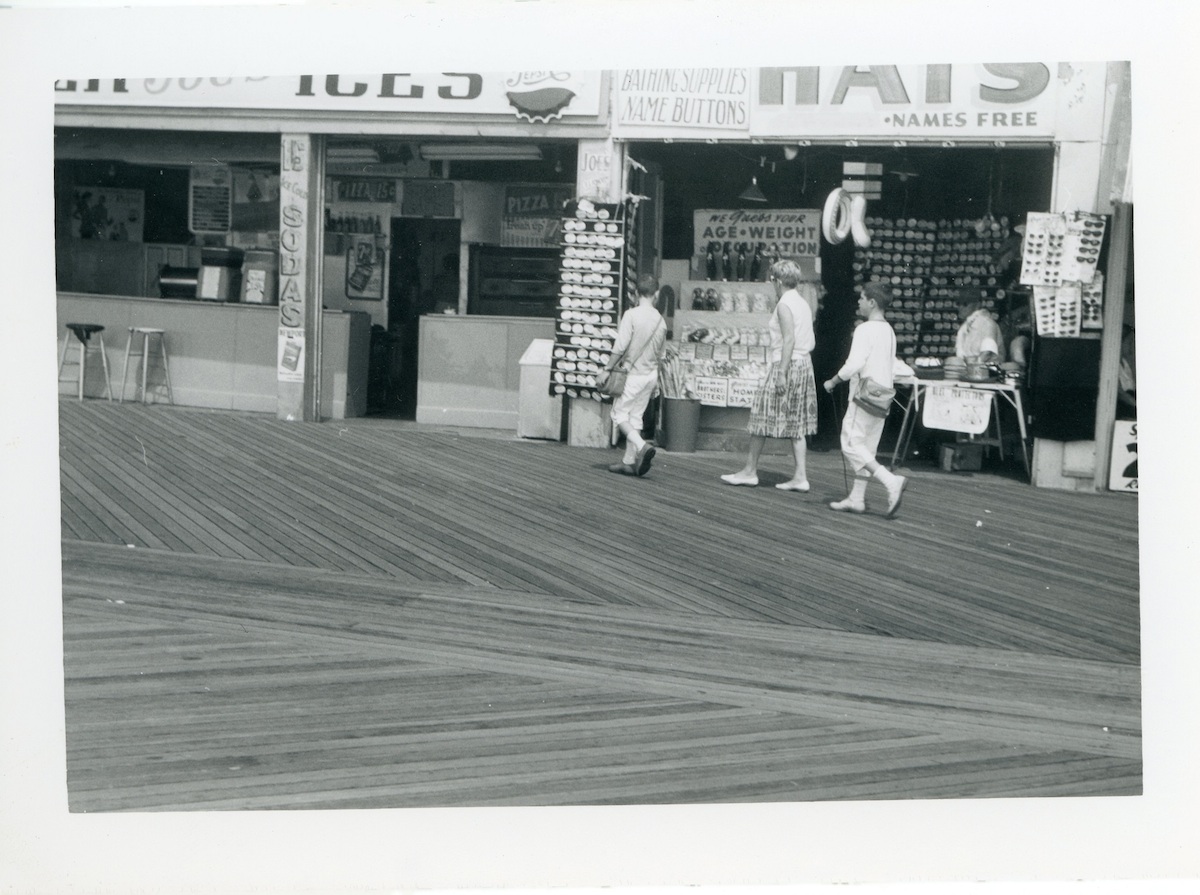 Our visitors passing a souvenir stand on the way to lunch on 15 cent slices of pizza and soft drinks. 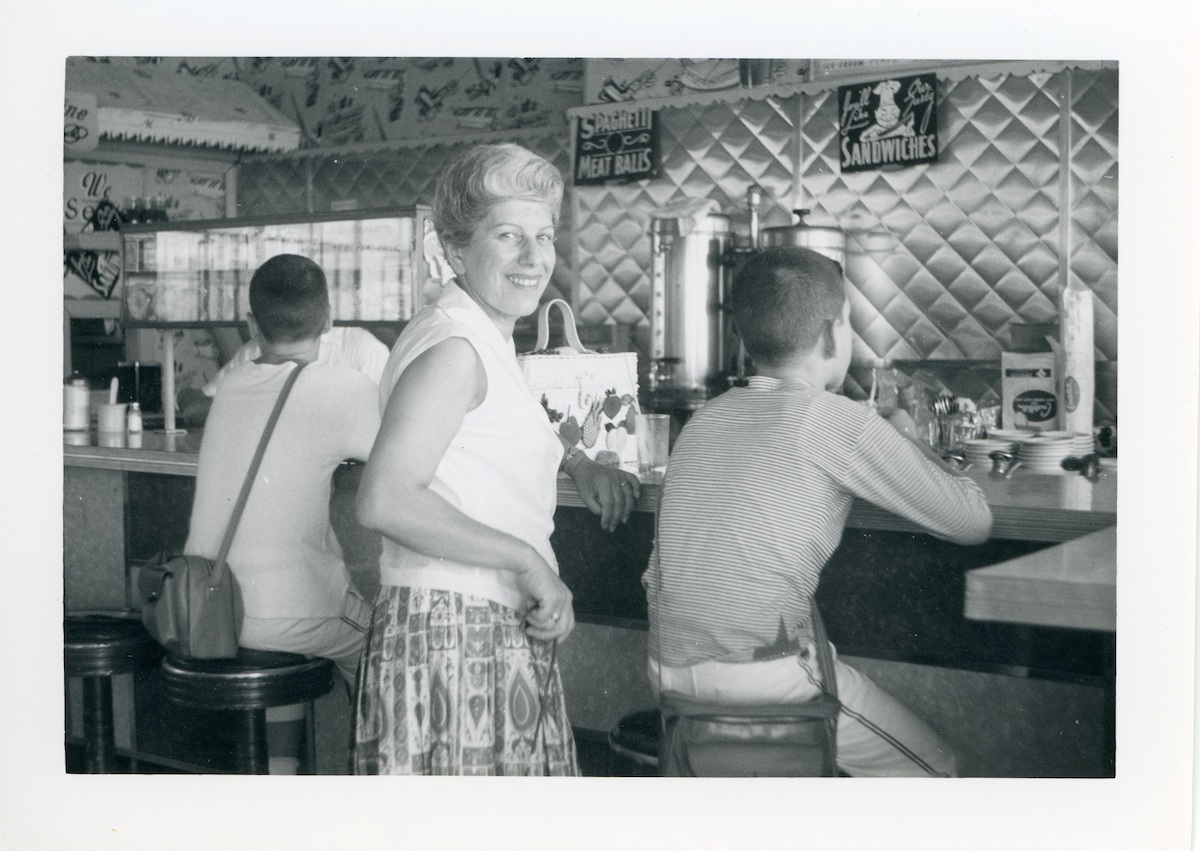 Into a diner for some refreshment before heading home. 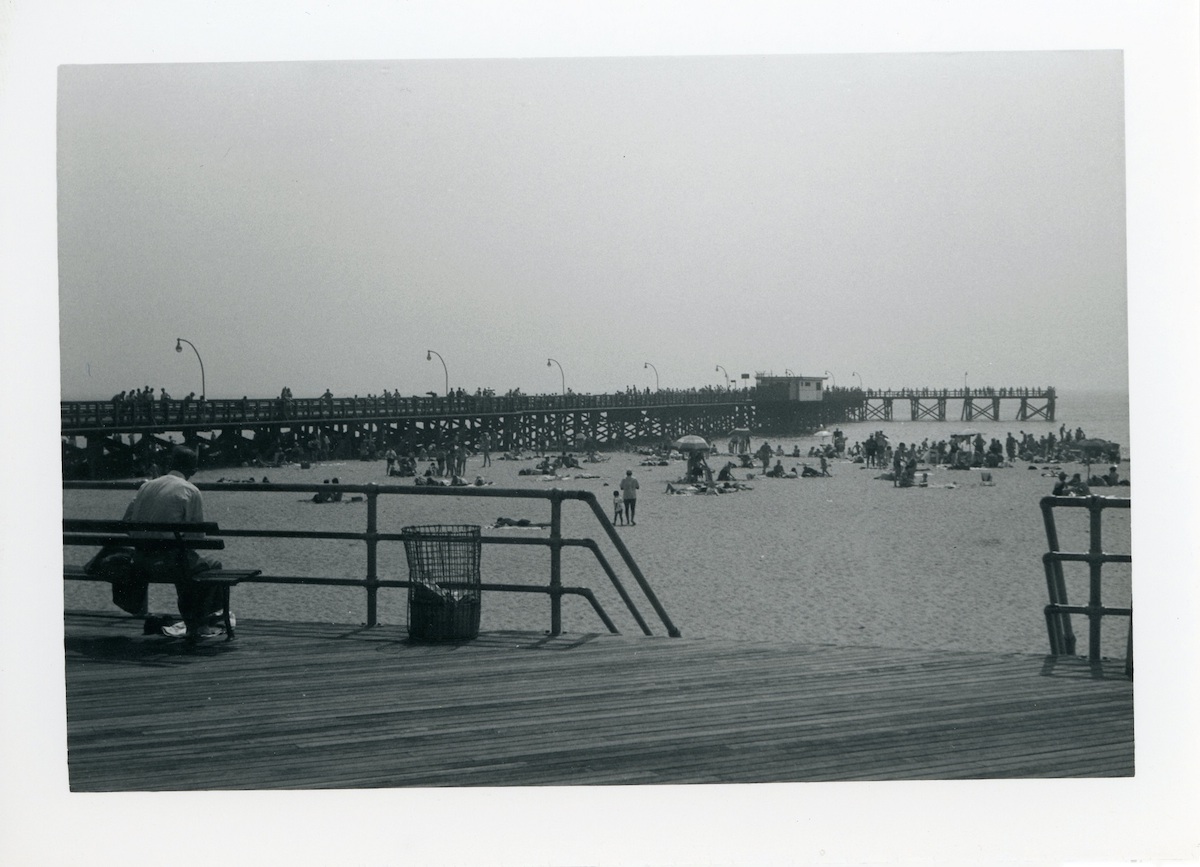 A busy day on the “T shaped” Coney Island pier.