We’ve hit the archive to bring you these photos from the Leisure and Lifestyle – Olympia Camping and Outdoor Life Exhibition in London during the 1960s. 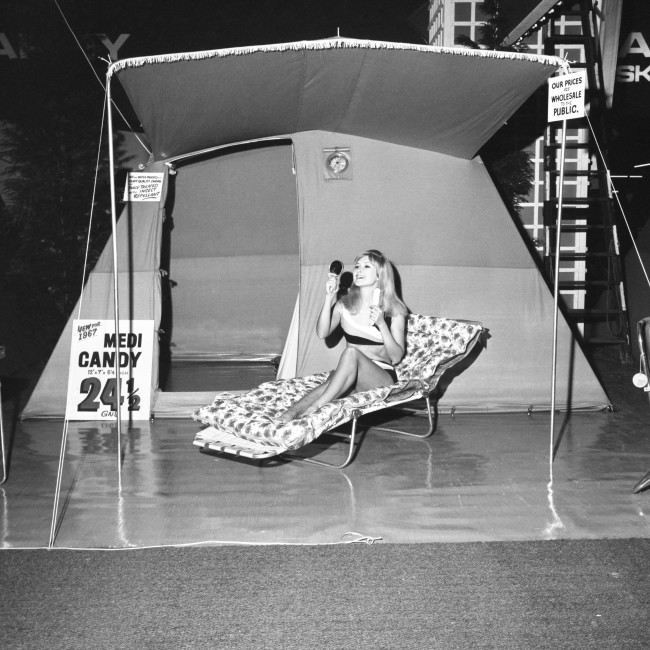 Rosemary Donnelly, 21, of Plymouth, inside a new 1967 Medi Candy luxury tent, with a selling price below comparable products from Europe, during the 9th Camping and Outdoor Life Exhibition at Olympia, London. The tent, which can be easily packed into a car boot, has a porch and includes an air-operated fan ventilator.
Date: 03/02/1967

Keith Joseph a disciple of Margaret Thatcher once made a speech at the Outdoor Life exhibition in 1975. The Times Diary described the scene:

To get the full flavour, you have to picture it being delivered to an audience of apparently non-political campers, many with young children, who were standing in front of a mock woodland area. In this incongruous setting, the speech Sir Keith chose to deliver amounted to an attack on the Soviet Union. While the campers and their young stood speechless, he spent several minutes pointing out that ti was more difficult for the Russians to move about their country than it was for us. It was only when he came to the punch line that it was clear what he was on about. “It does strike a chill”, he said. “Are we sure that we shall not eventually be subject to movement permits if socialism advances here? Don’t be too sure.

These three laugh in the face of summer rains (and a loose tent pole). 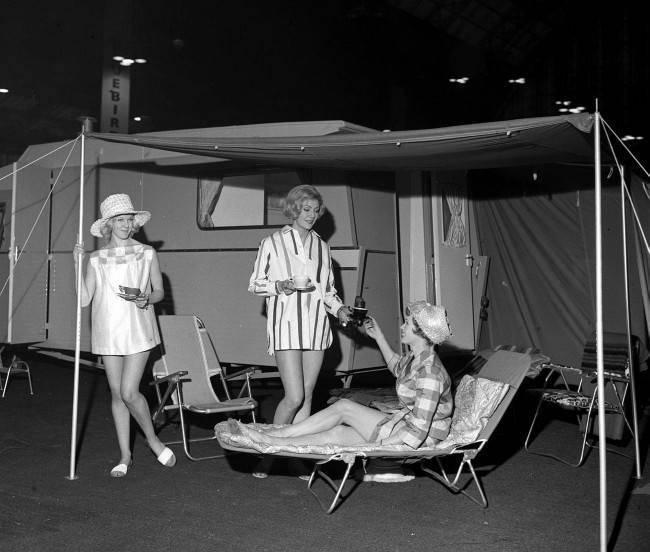 A SPECIALLY DESIGNED TENT WHICH CAN BE ERECTED AT THE REAR TO GIVE AN ADDITIONAL ROOM MEASURING ABOUT 7ft.3in.BY 10ft. IS A FEATURE OF THE SPRITE COUNTRYMAN CARAVAN
Date: 29/11/1960 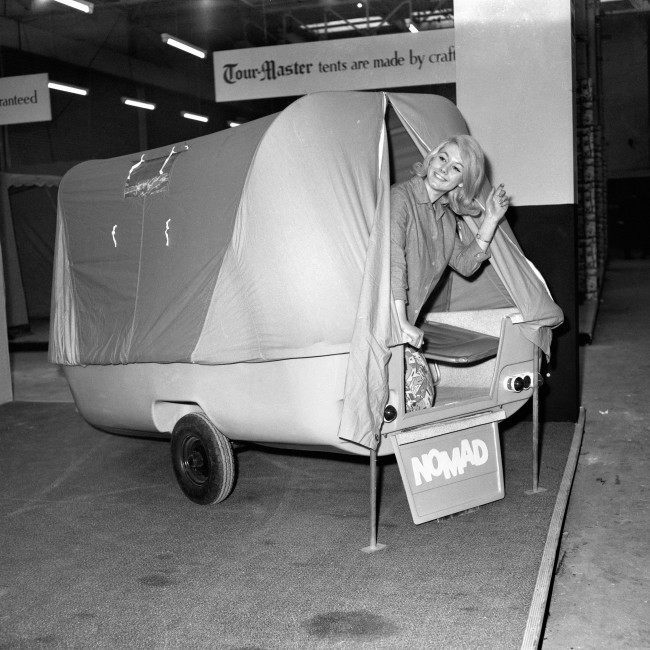 A Nomad Tourmaster tent at the Camping and Outdoor Life Exhibition, Olympia.
Date: 08/01/1963 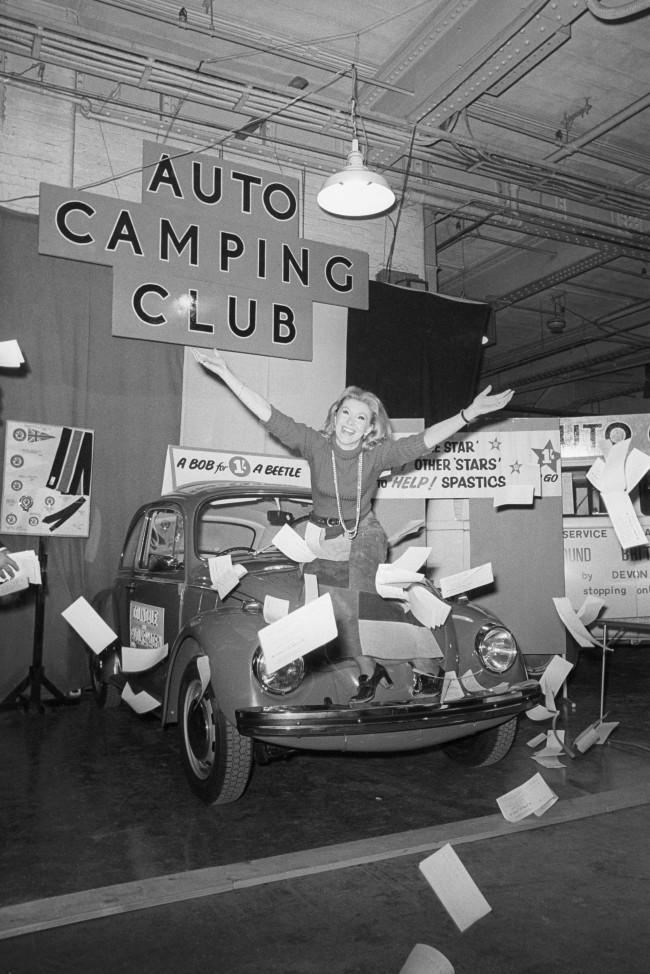 Actress Susan Hampshire in a flurry of raffle tickets at Colex ‘ 70, the 12th annual Camping and Outdoor Life and Travel Exhibition which opened at Olympia, London. Susan is seated on the bonnet of the new Volkswagon Beetle, which is first prize in a raffle organised by the Eastern Centre of the Volkswagon Owner’s Club in conjunction with the Stars Organisation for Spastics. The raffle tickets were sold by the actress.
Date: 31/12/1969

Wendy is by her mobile house. It is Wendy’s house. 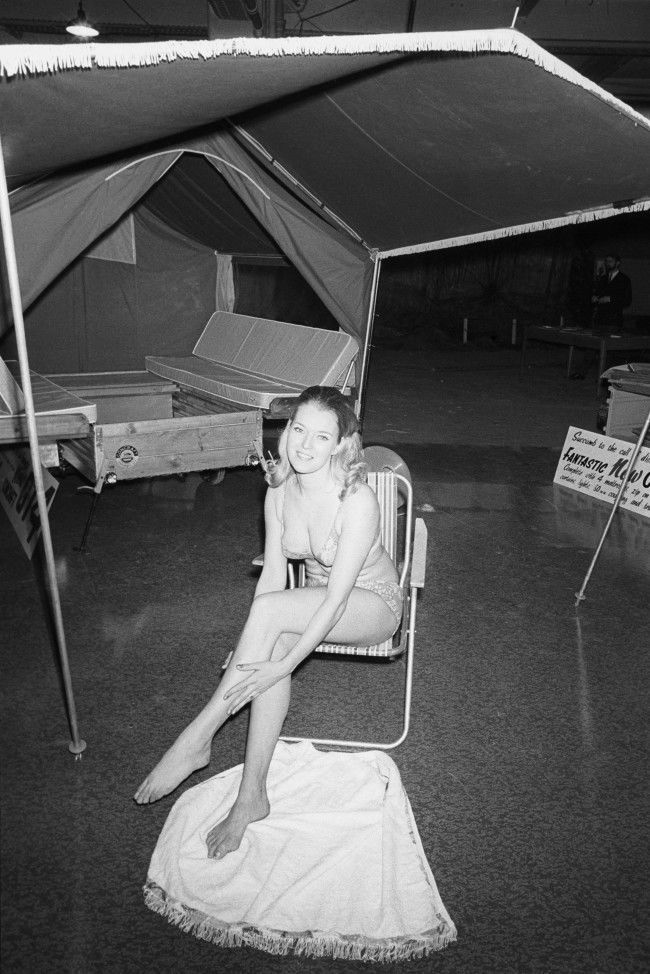 Wendy Pattenden, 26, of Bournemouth, demonstrates a tent trailer at Colex ‘ 70, the 12th annual Camping and Outdoor Life and Travel Exhibition which opened at Olympia, London. The trailer is made by Concraft Trailers of Roundhill, Tusmore in Bicester, Oxfordshire.
Date: 31/12/1969

Three in the back. One in the passenger seat. And another on the roof. Plenty of room for all your girlfriends. 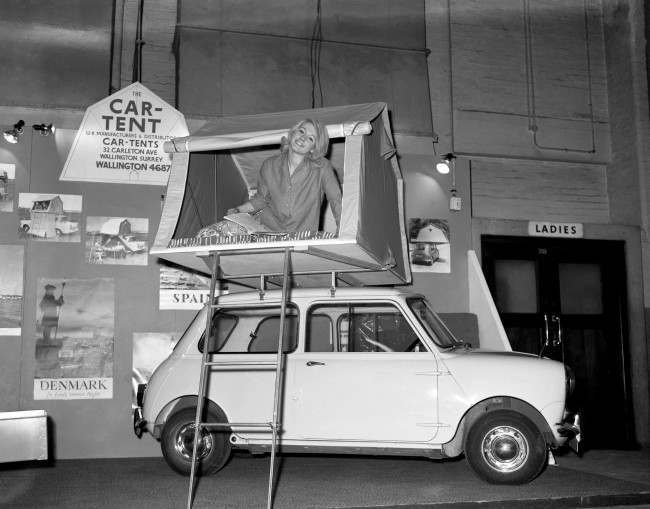 Diane Langton, 22, of Fulham, marvels at the shower while Ruth Senior, 25, of Boston, Lincolnshire, gets ready to detonate. 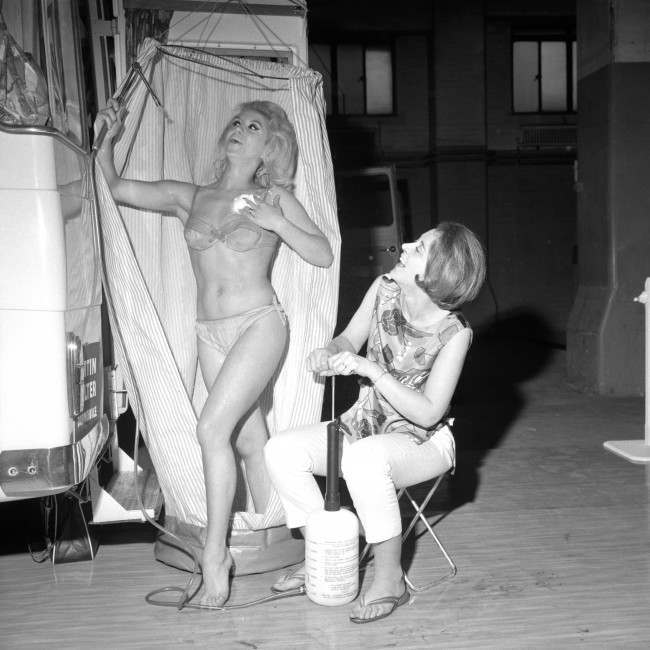 A portable shower, one of the highlights of the show, is demonstrated by (from left) Diane Langton, 22, of Fulham, and Ruth Senior, 25, of Boston, Lincolnshire, on the opening day of the 8th Camping and Outdoor Life Exhibition at Olympia, London. The exhibition is sponsored by the Camping Club of Great Britain and Ireland.  PA.16532050

Wendy’s back. But what’s in the bucket? 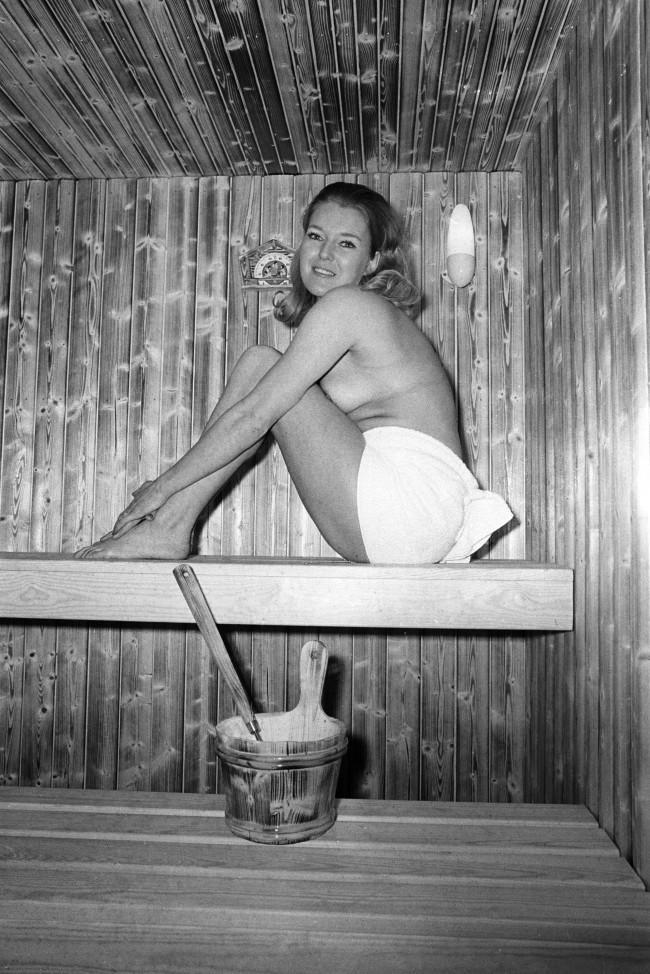 In London’s icy weather, Wendy Pattenden, 26, of Bournemouth, discarded her clothes to demonstrate a sauna for campers at Colex ’70, the 12th annual Camping and Outdoor Life and Travel Exhibition which opened at Olympia, London. The sauna is from Norpe Saunas of Finland. Date: 31/12/1969

And now for the pick of the bunch.

Come on in, baby, it’s cold outside. 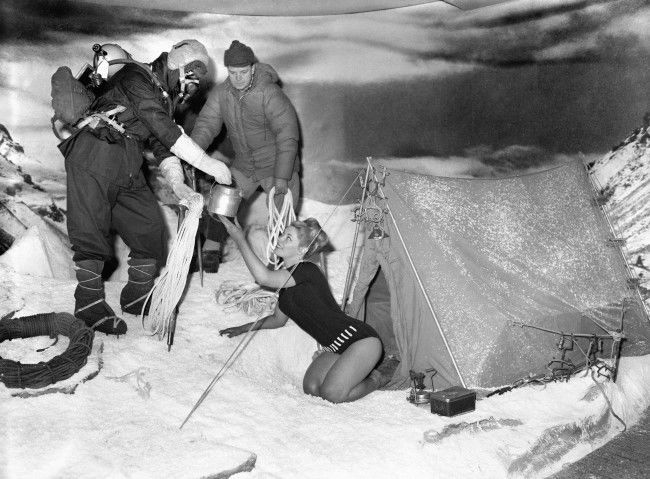