IN wartime, stealth is a valuable asset. To surprise the enemy, the navy disguises its ships.

Introduced by the British Admiralty in 1917, dazzle camouflage was intended to distort a ship’s external appearance, making it harder for enemy submarines to aim torpedoes accurately. Over 2,700 British merchant ships were camouflaged this way by October 1914.

The ships were brightly coloured. 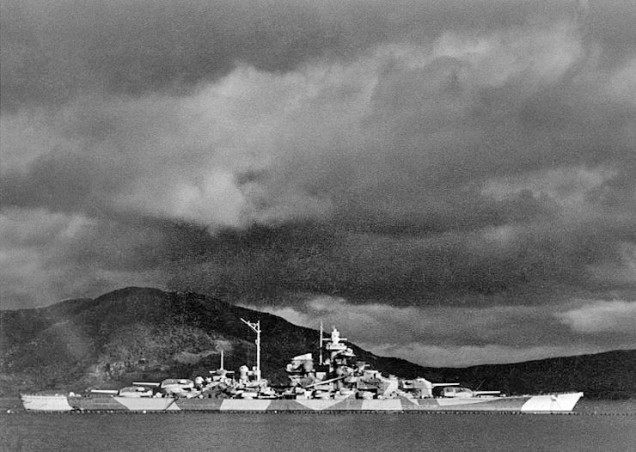 Tirpitz (a Bismarck-class battleship of the German War Navy Kriegsmarine, commissioned in 1941, sunk by Royal Air Force bombers in November 1944)

* British Artist and naval officer Norman Wilkinson had this very insight and pioneered the Dazzle Camouflage movement (known as Razzle Dazzle in the United States). Norman used bright, loud colours and contrasting diagonal stripes to make it incredibly difficult to gauge a ship’s size and direction. 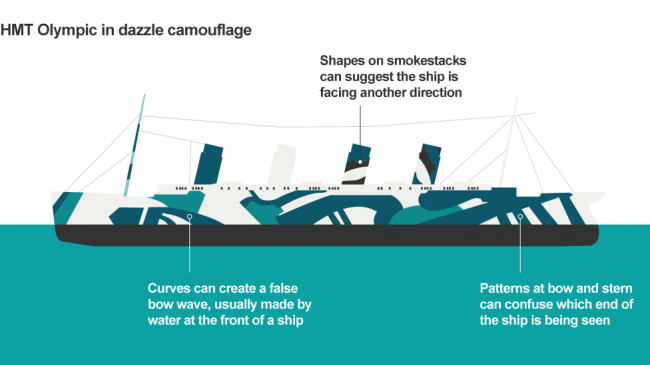 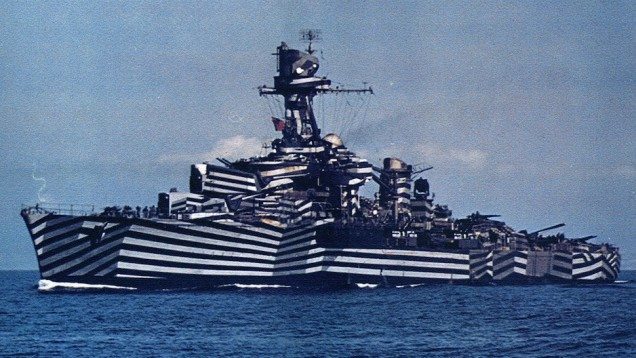 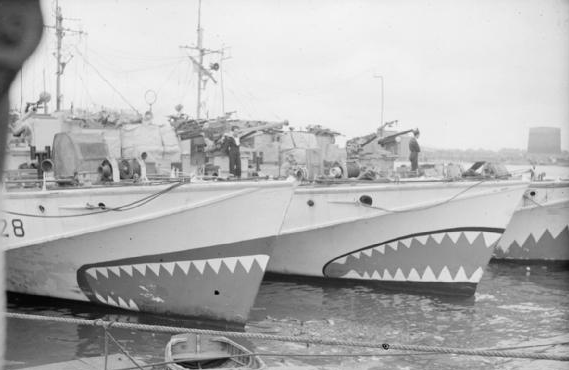 *Although Britain dropped dazzle, the US navy continued to use it during WW2. It was eventually outpaced by technology, as radar made it easier to track ships. 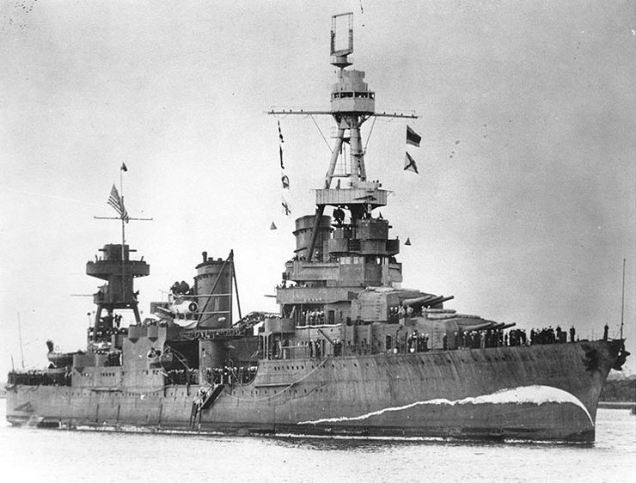 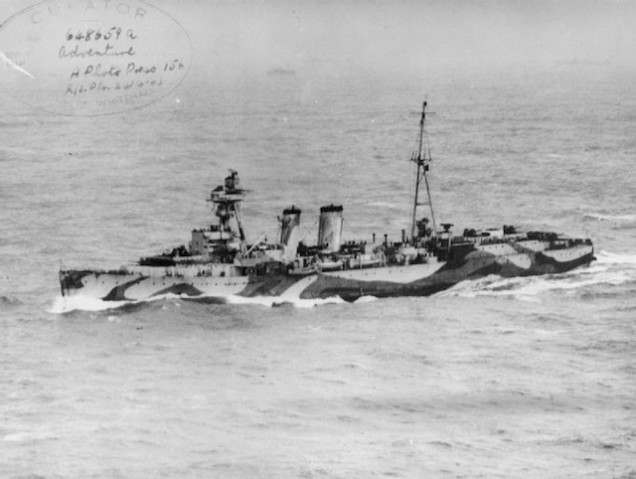 HMS Adventure (a minelaying cruiser of the Royal Navy, launched in 1924, sold for scrapping in 1947) 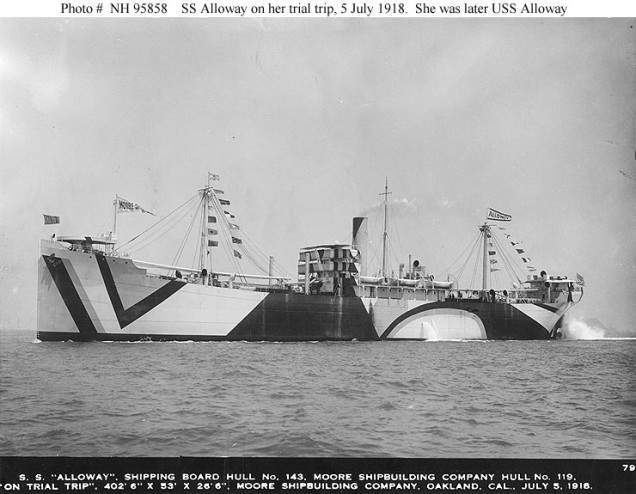 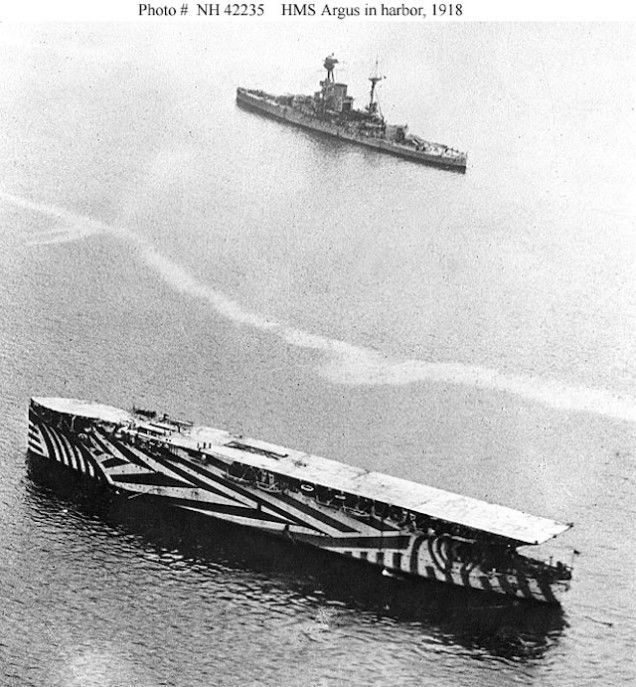 HMS Argus (an aircraft carrier of the Royal Navy between 1918 and 1944. After the WWII it became an accommodation ship and sold in late 1946 for scrap.) 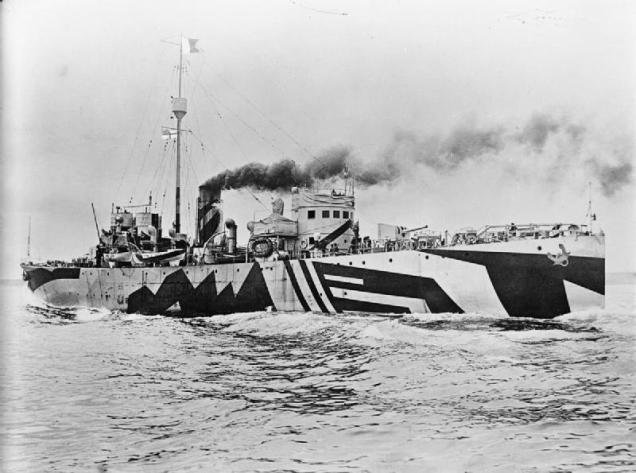 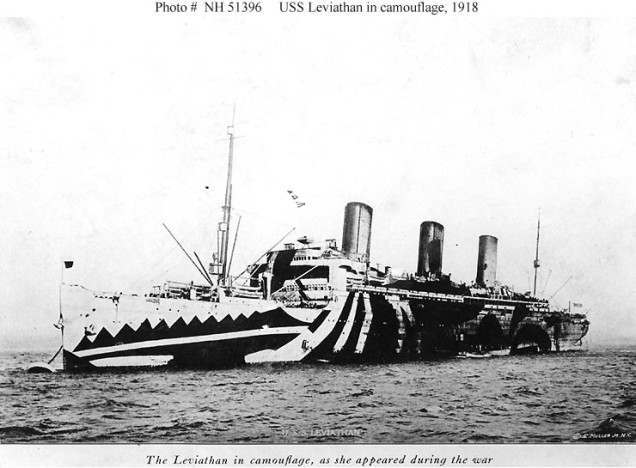 USS Leviathan (originally built in 1913 as an ocean liner named Vaterland. In 1917, it was renamed Leviathan, and used as a troopship. After World War I it was used by the American shipping company United States Lines until 1934. It was sold for scrapping in 1938.) 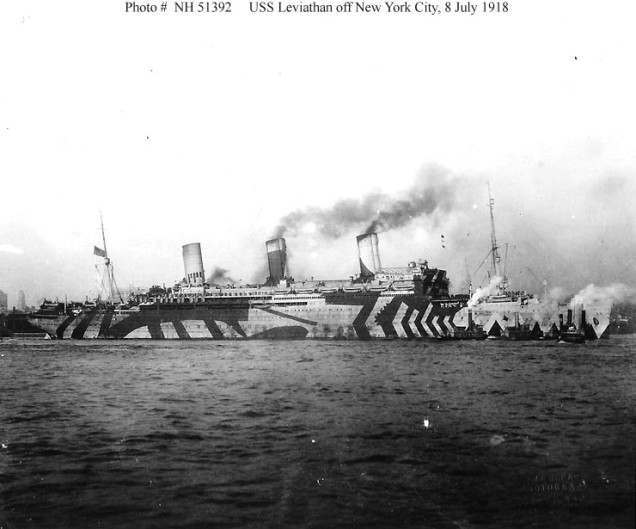 The transatlantic Olympic-class ocean liner RMS Olympic, the brother of the Titanic and Britannic (launched in 1910, used as a troopship between 1915 and 1919. Retired in 1935.) 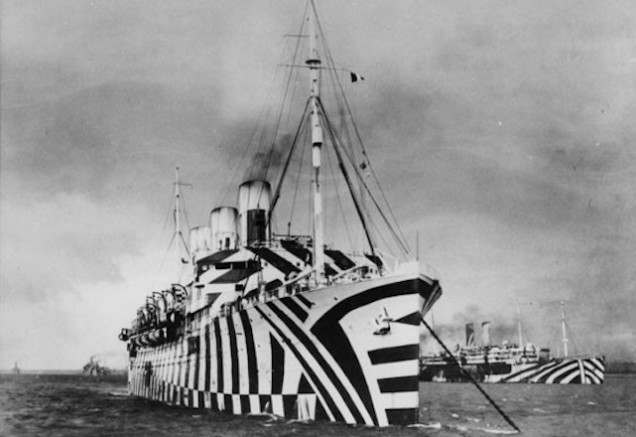 SS Empress Of Russia (built as an ocean liner in 1912-1913, refitted as an Armed Merchant Cruiser of the British Army during the WWI, but after the World War it was used as an ocean liner again. Scrapped in 1945.) 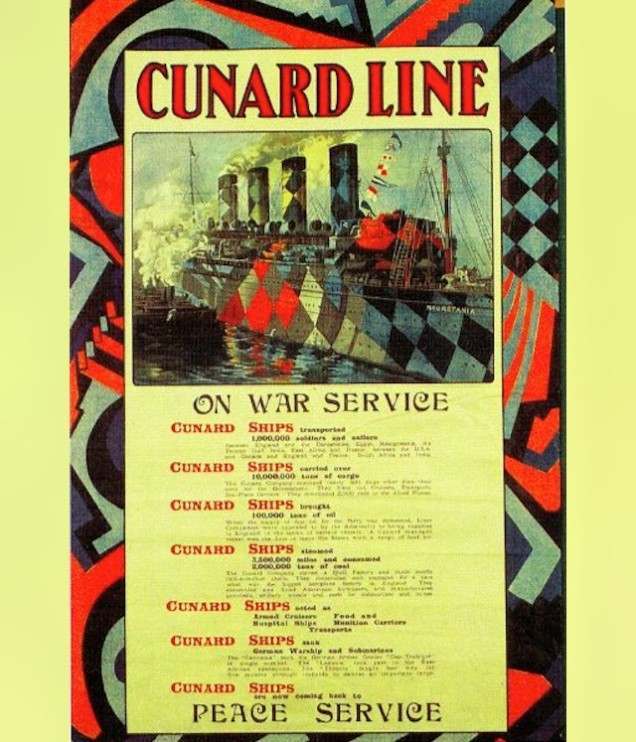 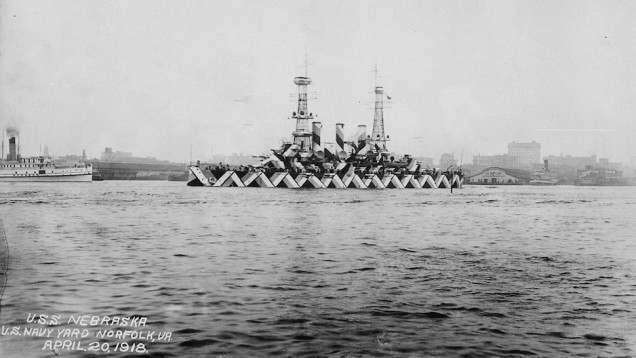 USS Nebraska (Virginia-class pre-dreadnought battleship of the U.S. Navy, launched in 1904, scrapped in 1920) 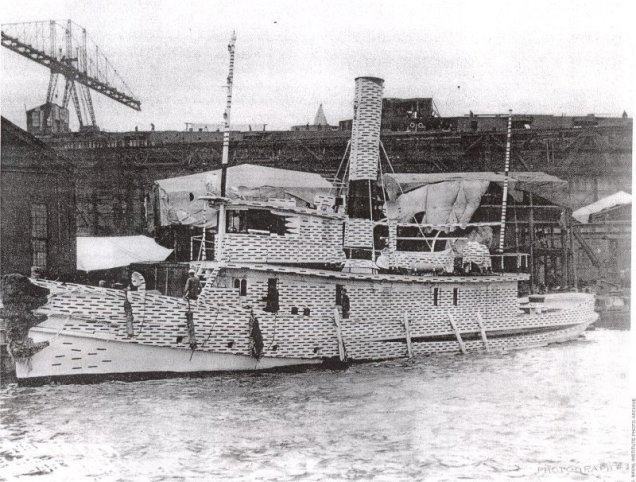 The USS Narkeeta (a Wahneta Class District Harbor Tug, launched in 1892 and decommissioned in 1923.) 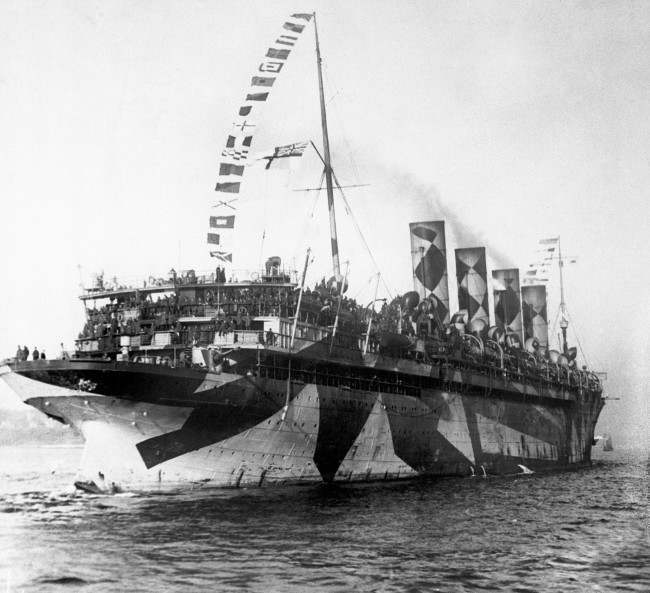 The RMS Mauretania, sister ship of the ill-fated ‘Lusitania’, arriving in New York with US soldiers returning from service in the First World War. ‘Mauretania’ still wears her wartime ‘Dazzle Camouflage’, intended to confuse U-Boats as to her position and length.
Date: 01/01/1919 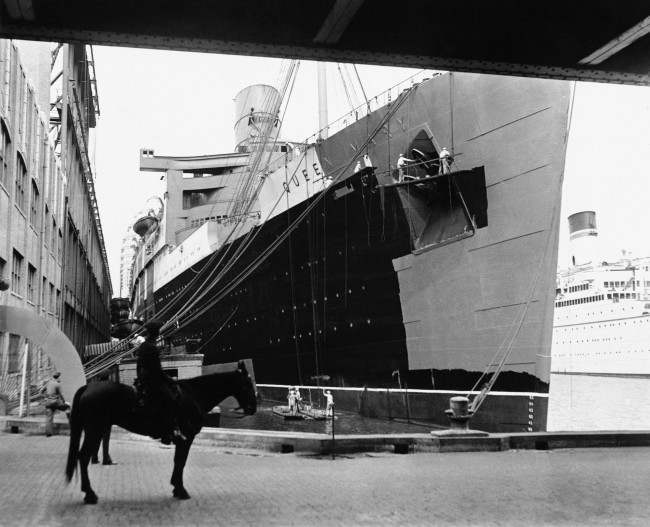 Workmen give the Queen Mary, pride of Great BritainÂs merchant marine, a paint t of battleship gray, at the Cunard Line in New York Sept. 13, 1939, where the liner was docked. The new coat of paint will serve as a camouflage for the big ship and when she sails for home waters. 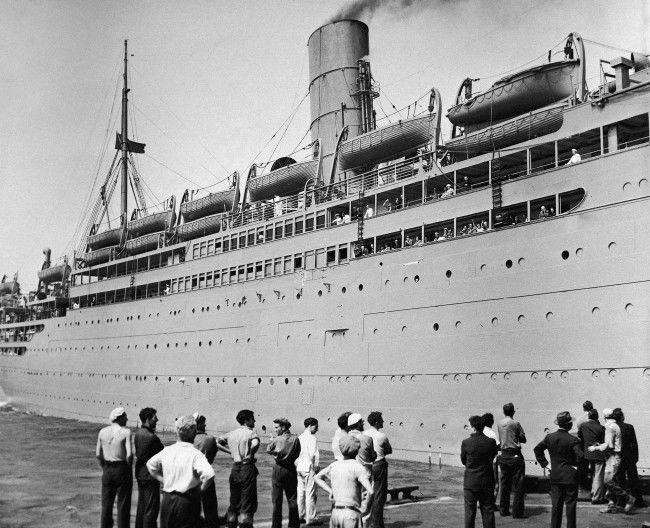 Painted Gray, in order of camouflage it from the Âenemy,Â the liner Franconia slipped out of its pier on Sept. 2, 1939, for a voyage back to its home port in England. Formerly painted a spotless white for cruise service, Franconia was hastily repainted and portions of its deck reinforced by sandbags for its drip from New York to England throughout waters which may be extremely dangerous before the voyage is completed. 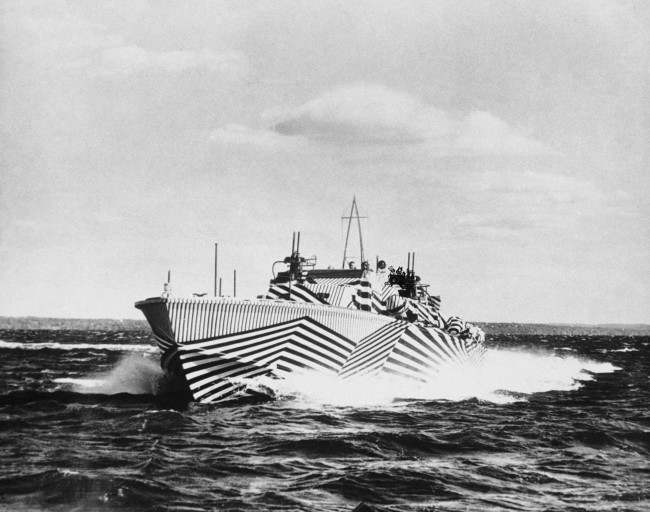 Newly camouflage to deceive enemy gunners, this American PT boat carries the heaviest armament of any boat in the navy for her size. Eighty feet in length, she carries four torpedoes, depth charges and rapid fire guns, during a trial, on Dec. 9, 1943. 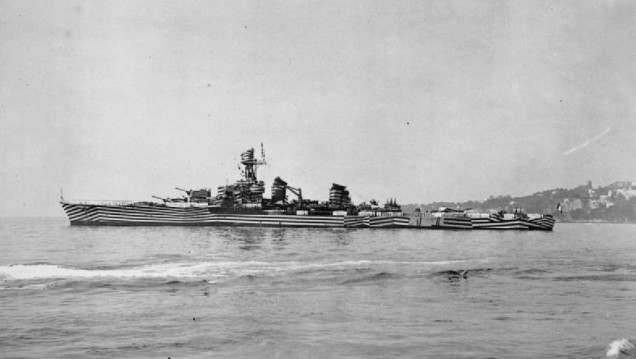