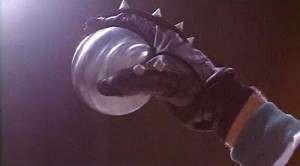 IN Ancient Rome, the poet Juvenal coined the term “bread and circuses” (panem et circenses), and to his credit, it is one that remains pertinent to this day, especially in our  21st century pop culture and entertainment.

Specifically, the idea of “bread and circuses” involves an artificial means by which the government or ruling class of a nation distracts or appeases “the common man.”  In Rome, for example gladiatorial games in the Colosseum fit the bill, distracting and diverting people from significant issues such as poverty, war, and corruption.

In the modern science fiction film, the palliative of “bread and circuses” has also commonly been highlighted.

In other words, many films involving dystopian cultures also depict bloody games that keep the masses entertained. In fact, the bloody games in these films serve a double purpose, often.

First, they distract the common folk from every day problems of life, and second, many of the games at the same time (violently) remove dissidents or rebels, who have spoken out against the regime in power.

The latest such film of this type is The Hunger Games: Catching Fire (2013), but that popular franchise is far from original in depicting man’s easily-distracted nature.

With that in mind, below ares six of the most savage “bread and circuses” games of the near dystopian future, as imagined by filmmakers. 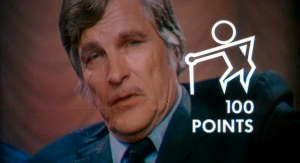 In the year 2000, in the United Provinces of America, the President decrees that this trans-continental race is “the American way of life…no-holds barred.”

If so, what does that say about our way of life?  The drivers in this violent contest compete to become the new American champion…by mercilessly running down innocent pedestrians.

They do so explicitly for points.  Accordingly, a female pedestrian is worth 10 points, a teenager is worth 40 points, children under the age of twelve count for 70, and senior citizens earn the drivers a whopping 100 points.

Meanwhile, all around the country, TV viewers watch with blood-thirsty glee as their fellow citizens are mowed down by the death racers.  The trans-continental race is vicarious violence, and the folks at home love it when a doctor gets run down, or any other “elite” figure, for that matter.

This set-up here is meant by the filmmakers to serve as the futuristic equivalent of the gladiatorial games and the Roman bread and circuses.  While the President luxuriates in foreign palaces, in China for example, and the American economy stumbles after the “Crash of 79,” the public is permanently distracted by bloody road games.

But make no mistake…this “race” is simply murder as “must see TV.” 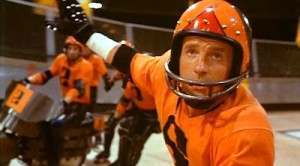 In 2018, according to this Norman Jewison film, the nations of the world have gone bankrupt, and the destructive Corporate Wars have come and gone. Now, corporations “take care of everyone,” and the violent team sport of Rollerball has been created by Big Business to remind people of “the futility of individual effort.”  The goal of the corporations in this dystopia is to be essential to every individual’s life, and for “the few” to make important decisions on “a global basis.”

The only wrinkle in this plan occurs when the world’s most popular Rollerball player, Jonathan E. (James Caan) sees his wife taken from him by a member of the “Executive Class.” Accordingly, he begins to rebel against the elitist system.  Although a retirement is planned for him, Jonathan bucks expectations and stays in the derby, even when it could mean his death.  The Ruling Class keeps changing the game’s rules in an effort to murder Jonathan, but somehow he endures…

A critique of both professional sports and corporatism, Rollerball explores a world where there are no more books, only computer summaries of books, and where the general populace is distracted by the bloody nature of the Rollerball tournaments.  In this world, the Rollerball athletes are idolized as heroes and icons.

In the end, however, by seeking to destroy Jonathan E., and failing to do so, his Corporate Masters only “wake-up” the people, who have seen — quite bloodily — that an individual can make a difference. 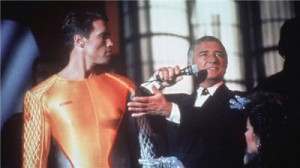 Damon Killian (Richard Dawson) — the Simon Cowell of the year 2017 — is the ringmaster of The Running Man, a TV series that keeps the people of a fascist America distracted from real life, in this film based on the book by Stephen King.

Here, the violent TV series (which airs on the same network as hits Climbing for Dollars and The Hate Boat) features convicted criminals being forced to survive a murderous obstacle course.  The arena and the athletes depicted in the film, oddly enough seem to forecast the set, costumes, and challenges of American Gladiators (1989 – 1997).

But in the film, one unlucky contestant, Ben Richards (Arnold Schwarzenegger) learns just how fickle America’s TV audience can be.  One minute, the audience hates him, the next they love him.

By contrast, Killian sees only the entertainment value of his work, as he reports to his latest contestant/victim: “For fifty years, we’ve told them what to eat, what to drink, what to wear.  For Christ’s sake, Ben, don’t you understand? Americans love television. They wean their kids on it. Listen. They love game shows, they love wrestling, they love sports and violence. So what do we do? We give ’em what they want! We’re number one, Ben, that’s all that counts, believe me.” 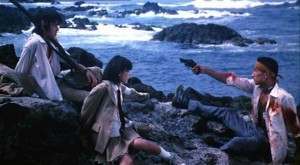 Based on the controversial novel by Koushan Takami, this film is set in Japan in the year 2002, which has become part of a  vast technological totalitarian state.

Following the Millennial Reform School Act, approximately fifty middle-school students are selected every year to participate in a murderous game.  This game occurs on a remote island, and is televised as a means to distract and divide the populace.

In this “game,” the students of class 3-B have three days in which to kill each other.  They wear explosive collars (which also feature microphones), so non-compliance is not a good option.

In this case, the games seem like a variation on Golding’s Lord of the Flies (1954) scenario, only with a repressive and fearful government forcing interpersonal combat and, not incidentally, revealing human nature in the process. 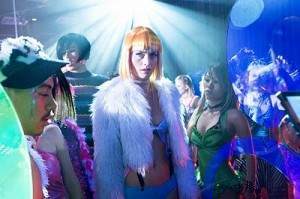 In Gamer viewers are introduced to the games “Society” and “Slayers,” both invented by genius programmer Ken Castle (Michael C. Hall).

“Society” is a sort of futuristic version of The Sims, but using Castle’s “Nanex Technology,” it actually permits the (rich) player to control the bodies of living people, namely the poor.  In other words, you can pay “to get controlled.”

“Slayers” is a first-person shooter game, only with real bodies and real bullets.  Here, the rich users “play” in the bodies of incarcerated death-row inmates.  If the avatars survive thirty games, they are to be released from prison, but as one can imagine, that’s a pretty high benchmark given the violence of the games.

“Society” and “Slayers” are such horrifying games because they re-imagine slavery as a legal business transaction.”  The slaves get money for the use — and misuse — of their bodies, and the rich get to act out their darkest fantasies with no fear or legal repercussions.

Everyone is so focused on the game that they don’t notice the rich getting richer, and the poor getting increasingly exploited. 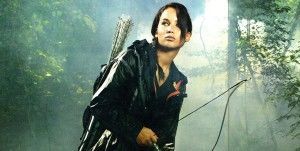 The Hunger Games features a futuristic blood sport that serves as distraction in the futuristic world of fascist America, called Panem.

Specifically, the government (under absolute authority of President Coriolanus Snow [Donald Sutherland]) selects “tributes” from each of the 12 surviving districts on an annual basis.  Those tributes are then forced to fight in a technological arena, where there can be only one victor.

If Rollerball critiques professional sports, and The Running Man gives the “game show” genre a good jab, then The Hunger Games and its sequel take dead aim at reality TV programming and celebrity culture.

In this case, the tributes not only become “stars” who appear on TV, but their fashion, weddings, and romantic lives all become fodder for propaganda, and sources of distraction for the people.

Catching Fire notes this idea explicitly, and contestant/victor Katniss (Jennifer Lawrence) is informed that the people of Panem desire a “fairy tale ending” and that her job is to “be a distraction” so that people don’t think about their “real problems.”

The nature of the game in The Hunger Game films also suggests real life programming such as Survivor (2000) because alliances are made (and inevitably broken…) during game play.  Meanwhile, each edition of the game changes both locations and rules to keep things fresh, or to draw renewed attention — and ratings — from the people. 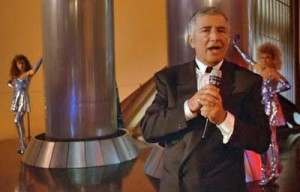 One intriguing intriguing aspect of all these “bread and circuses”science fiction movies is that on some post-modern level, they qualify as the very thing they criticize.  All the films featured above are quite violent in nature, not to mention incredibly diverting.

Those who are about to die, we salute you…