In June 1973, Creem magazine issued a directive: “PUT DOWN those needles and quaaludes, kiddo, and pick up the jug!” It was time to get into Alice Cooper’s Alcohol Cookbook and Timetable for World Conquest.” 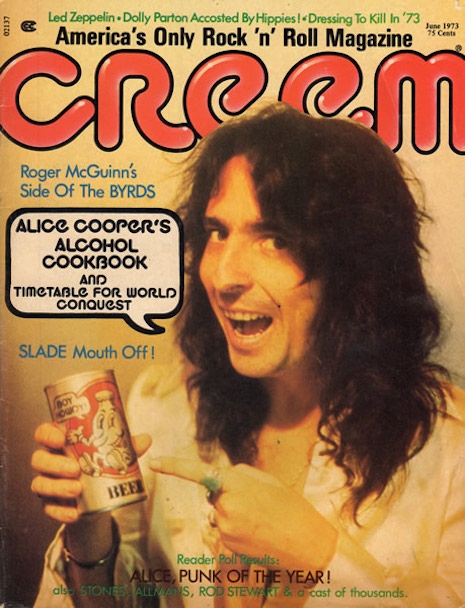 As Oliver Hall writes, “By ‘73, the late, great Glen Buxton, who contributed four recipes to this cookbook, had already been hospitalized for pancreatitis and forbidden to drink ever again—not the most seductive advertisement for a cold glass of Buxton’s Bomber.”

So here are Alice Cooper’s 23 recipes (22 drinks plus one hangover tincture) for all you anti-drugs purists.

THANK god the age of drug sickies is over. Those bread ‘n’ butter boys, Alice Cooper, have proved exemplary leadership into the genial asskicking renaissance of alkiedom. They stand for booze almost as much as great music, and though they may total Porsches, puke up pop tabs and bite off their fans’ thumbs, none of ’em will ever make the cover of The Rolling Stone by ODing in a Continental opium den. All-American lushes to a man; they want you to follow their good example.

So PUT DOWN those needles and Quaaludes, kiddo, and pick up the jug! It’s the surest, fastest way to glean all the chrome hotcha charisma of Alice himself for your very own; just stumble around drunk off your ass all the time and instant stardom is assured. Stan Cornyn will break down your door with a recording contract and all the boys and girls on your block will want to ball you. You can start with (Unpaid Plug) Budweiser beer which is the Cooper crew’s staple suds, consumed by the gallon day in and day out. For those intrepid souls and old alkies with a tolerance who want to, machete their way into the exotic recesses of classic Alice Cooper toxicity, the band has provided us with the following truly lethal recipes, each and every one employing spirituous fermenti in a diabolic manner unique to Alice’s taste and lifestyle on the road and at home. 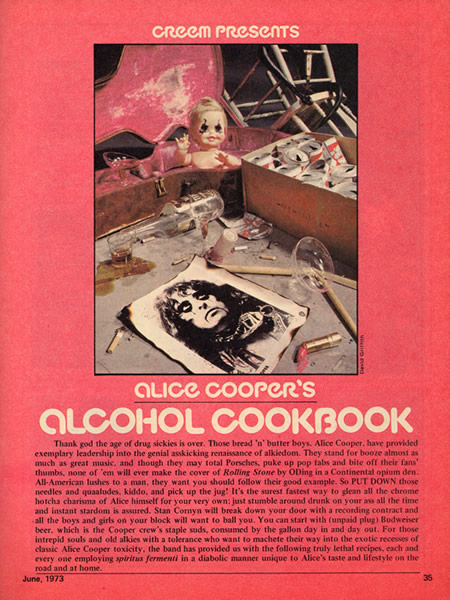 So toss a groupie on the barbie and star blending.

Pinacolada A La Cooper (For 6)
10 ounces dark (151 proof) Rum
1/6 Fresh Pineapple, chipped into sections
16 ounces fresh coconut milk
Pour the rum into a bowl. Soak the pineapple in the rum. Pour into blender, adding two more ounces of rum. Add the coconut milk, then 2 ounces fresh pineapple juice and 1 tray of ice. Blend until you freeze it. Garnish with pineapple wedge and cherry

Lizard Skin
Hollow out a half of a large orange. Pour in one large jigger of brandy, flame brandy, extinguish after a moment; drink.

Tunafish Malted (For hangovers)
1 can of tunafish
2 scoops of Pistachio Ice Cream
4 ounces of Cream
Blend. Drink. Go back to bed

Alice Cooper Ass-Kick
Squeeze 1/2 lime into a 12 ounce glass and drop in the rind. Add ice cubes and 1 1/2 jiggers vodka, and fill with ginger beer. Stir and serve. 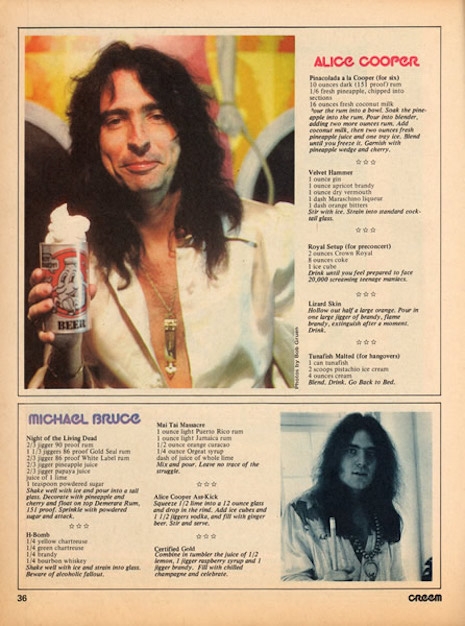 Billion Dollar Baby
1 1/2 ounces whiskey
1/2 ounces carcao
1 dash grenadine
1 white egg
Shake with ice as thought all five Coopers had turned all the up and were playing right between your ears. Strain into cocktail glass.

Creme De Banana
1 chilled shot glass
Drink by the shot until you get there. 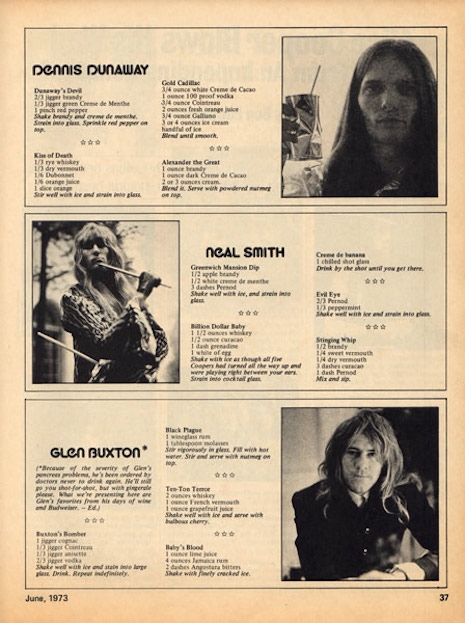 (Because of the severity of Glen’s pancreas problems, he’s been ordered by doctors to never drink again. He’ll still go you shot-for-shot, but with ginger ale please. What we’re presenting here are Glen’s favorites from his days of wine and Budweiser.) 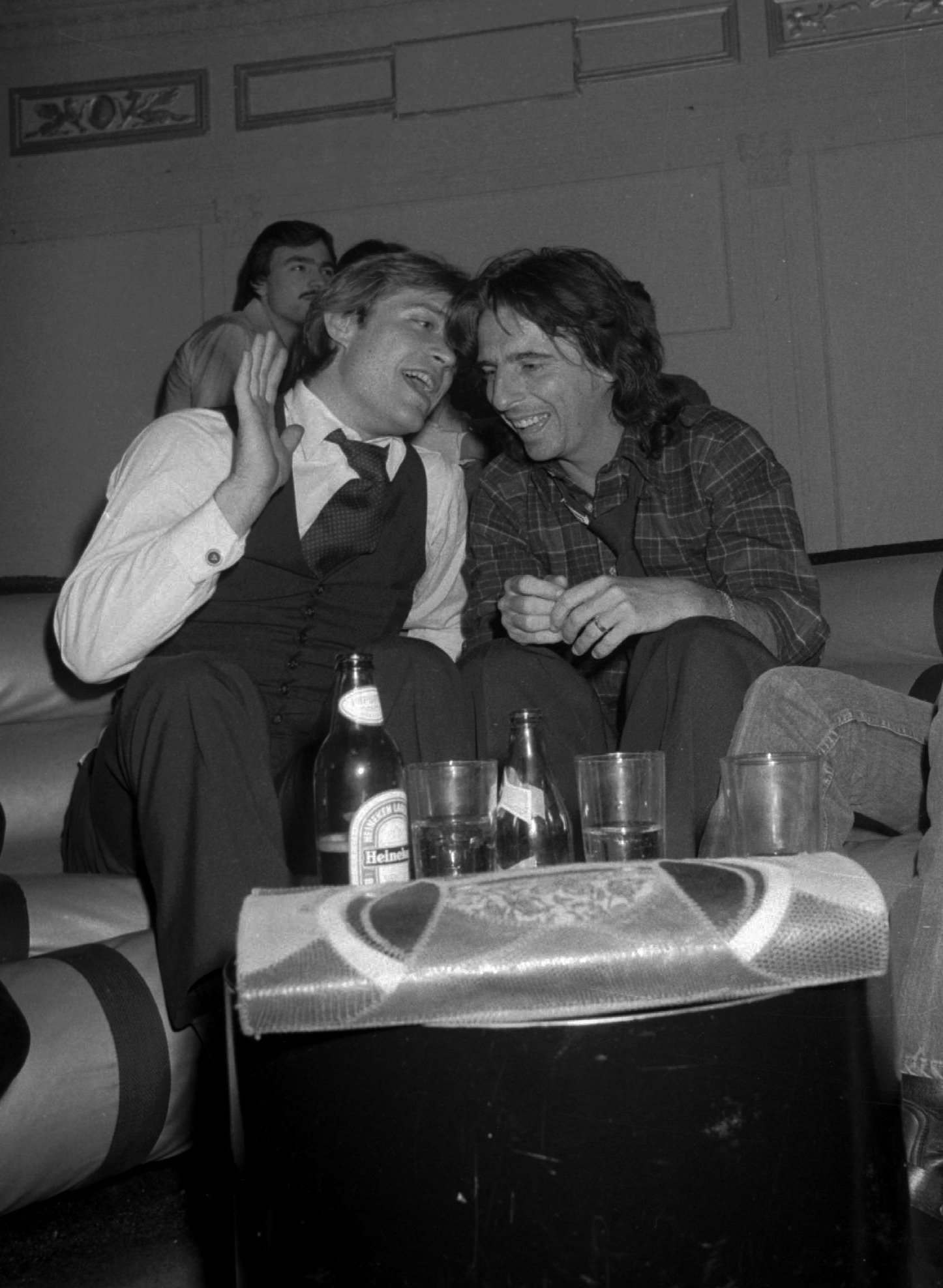