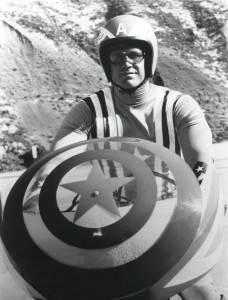 WITH Captain America: The Winter Soldier (2014) shattering box office records this weekend, it is an opportune time to recall that this iconic Marvel superhero — and symbol of non-ironic Americana — has not always been treated very well by Hollywood.

In particular, the 1970s and 1980s proved a difficult span for the patriotic Cap, who had made a career in his Marvel comic-book of smashing Nazis and communists. 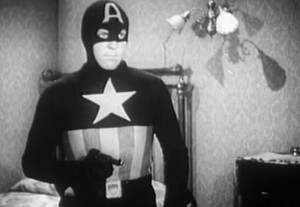 But first, the 1944 Republic serial, Captain America, created a new character and origin for the superhero.

In this case, District Attorney Grant Gardner (Dick Purcell) — not Army private Steve Rogers — was the costumed hero, and the drama saw him battling a villain called “The Scarab” (Lionel Atwill).

The plot is downright weird by today’s standards, and it is bizarre that a new secret identity for Captain America was created for the black-and-white serial.

But the problems with this movie adaptation ran even deeper than that. This Captain America used a gun instead of the character’s trademark shield, for instance. And Bucky, Cap’s dedicated sidekick, was nowhere to be found.

But at least this low-budget production got one idea right.

And that was, simply, that Captain America was a stalwart and committed defender of his nation.

Such nationalism, however, proved deeply unpopular in the era of the Watergate Scandal and the Vietnam War.

Accordingly, intrepid filmmakers of the disco decade found it difficult to re-parse the all-American hero for an age in which such true-blue expressions of patriotism were not exactly in favor. 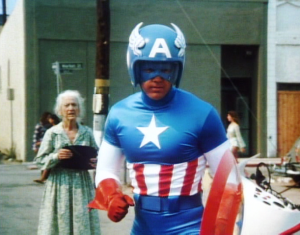 In 1979, Universal Studios resurrected Captain America for television with two TV-movies starring Reb Brown as Steve Rogers, but several modifications were made to Cap’s story.

In Captain America (1979), the first of the films, the hero’s re-vamped origin was presented for audiences. In this version, Steve Rogers was the son of a “super crime fighter” who went by the name Captain America.

Before his death, the elder Mr. Rogers invented F.L.A.G. — Full Latent Ability Gain — a steroid which could allow a man to develop one hundred percent of his physical strength.  Unfortunately, the steroid would only work on one man, his son,  Steve Jr., and he wanted absolutely nothing to do with it.

In fact, this “new” Captain America – quite dramatically unlike his patriotic comic-book predecessor — had no interest in doing anything…except hanging out.

“I just want to get out on the road, look at the faces of America,” Brown’s Steve Rogers opined, sounding like a hippie surfer, “I don’t want to report in or check out. I don’t want to look forward to weekends…I want every day to be the same.  I just want to kick back and find out who I am.”

Captain America’s costume in this TV entry was also a drastic and unappealing revamp of the comic-book design. Cap’s mask became instead a simple blue motorcycle helmet…with transparent goggles. His helmet wings looked awful too, and his trademark shield was made of transparent plastic.

The TV-movie’s plot involved Steve choosing to ingest his father’s F.L.A.G steroid after a friend, Jeff, was found murdered…killed in a conspiracy involving an oil tycoon.  Again, this seemed wrong, because the Captain America of the comic-books was an idealist, not someone invested in revenge, or in mere personal matters.

Once buffed-up by the F.L.A.G. steroid enhancement, Steve was then outfitted with a bullet-proof shield and a souped-up motorcycle by a secret government agency.  His mission: to prevent the evil tycoon, Brackett (Steve Forrest) from detonating a neutron bomb.

The second Captain America TV-movie starring Reb Brown was not much better than the first. In Death Too Soon (198), Captain America returned to battle a villain named Miguel, played by Christopher Lee, who was planning to release an accelerated-aging drug upon the city of Portland, Oregon.

Once again, the “groovy” Steve Rogers was depicted as an easy-going guy undertaking a journey of “self-discovery” in his cool 1970s van.  Like the previous entry, the TV movie features many shots of Rogers chillaxing on the scenic West Coast.

It was a long eight years until Captain America returned to screens, this time in a movie that almost nobody saw. 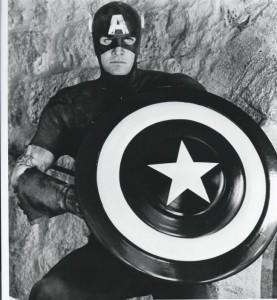 So in the age of Tim Burton’s Batman (1989), Captain America returned…but went straight to home video.

The low-budget film was directed by Albert Pyun and starred Matt Salinger as Captain America. Scott Paulin played the villain Red Skull, who in this case had been mysteriously transformed from a Nazi to an Italian.  Saddled with dreadful rear-projection scenes and laughable miniature effects the film was a disaster, and one quickly forgotten by audiences, despite the presence of such notable cast members as Darren McGavin and Ronny Cox.

From 1944 to 1989, then, Captain America was re-tooled by Hollywood as a gun-toting D.A., transformed into a counter-culture “dude” who just wanted to “hang out,” and forced to vet a dreadfully inept low-budget adventure.

Throughout this span, perhaps the best version of the character was rendered in animated form, in the 1966 Grantray-Lawrence series, The Marvel Super Heroes.

The stories here were straight-forward, simple and direct, but Captain America, at least, seemed like his comic-book counterpart, and not some stranger wearing a quasi-familiar costume. 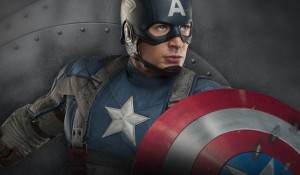 Then in 2011, in the hands of director Joe Johnston and actor Chris Evans, good old Cap finally got the movie adventure he deserved in the box office hit Captain America: The First Avenger.

The rest, as they say, is history.  Welcome back, Cap!  Or perhaps I should say, it’s nice to finally meet you…