‘Nothing so appalling in the annals of horror!’

Two Thousand Maniacs! is the 1964 Confederate Flag-fanned gore fest brought to you by the makers of Blood Feast. Said to have been inspired by the 1947 Lerner and Loewe musical Brigadoon, the story records Yankees being killed by ‘Rebels’ in imaginative fashion.

Six people are lured into a small Deep South town for a Centennial celebration where the residents proceed to kill them one by one as revenge for the town’s destruction during the Civil War.

You want gore? You can’t handle the gore. Deaths include:

Dismembering a woman with an axe, and thereafter roasting her in a barbecue pit;

Staging a “horse race” in which a man is ripped limb from limb;

Rolling a man downhill in a barrel embedded with nails;

Crushing a woman with a boulder held aloft in a contraption resembling a carnival-style dunk tank.

2000 Maniacs! was directed and written by Herschell Gordon Lewis, the “Godfather of Gore”, who also wrote and sung the title song, The South Gonna Rise Ag’in‘.

It was filmed in ‘Blood Color’. 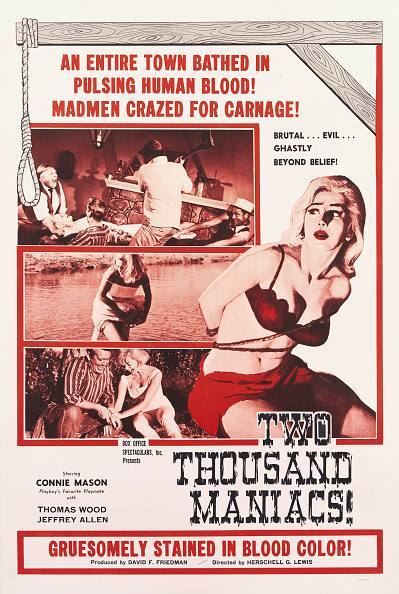 Lewis was not all that impressed with the film’s star Connie Mason, telling the great John Waters:

“She never knew a line. Not ever. Nor could she ever be on the set on time. What we did in Two Thousand Maniacs! (1964) was to pull about two-thirds of her lines in order to finish on time. I often felt if one took the key out of Connie’s back, she’d simply stand in place.” 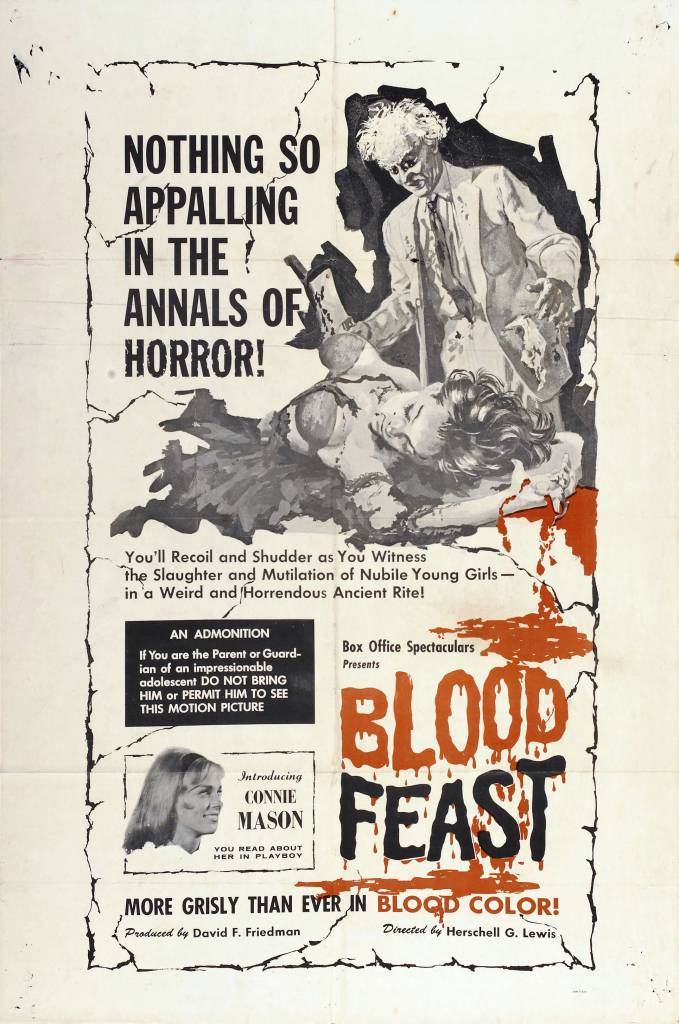 Connie Mason auditioned for the part by becoming Playboy magazine’s Playmate of the Month for its June 1963 issue and appearing in the aforementioned Blood Feast (1963) where she played the role of Suzette Fremont. 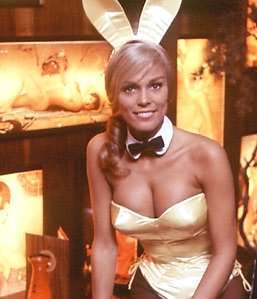 Like Blood Feast, 2000 Maniacs! was shot in Miami, where Connie worked at the Playboy club. The film was cheap to make. And Connie was local.

Connie’s appearance in Playboy featured a short Q & A called “ABOUT CONNIE MASON”:

AMBITIONS: To be a successful high-fashion model.

Connie was presented as a princess of high fashion:

Viewing the curious world of haute couture, disgruntled males have long suspected that fashion’s feudal lords require their standard-bearers to be spindle-shanked, slab-chested, hollow-cheeked creatures who collectively possess all the earthly sensuality of a soda straw. Like most sweeping generalizations, this one has its exceptions – and if there are, admittedly, a depressing number of lean and hungry lookalikes in dress circles, it is also true that a few couture mannequins do exist who are as eye-catching and artistically assembled as the gowns they wear. Such an exceptional one is Connie Mason, an all-girl fashion model from Chicago who is our decorative June Playmate… 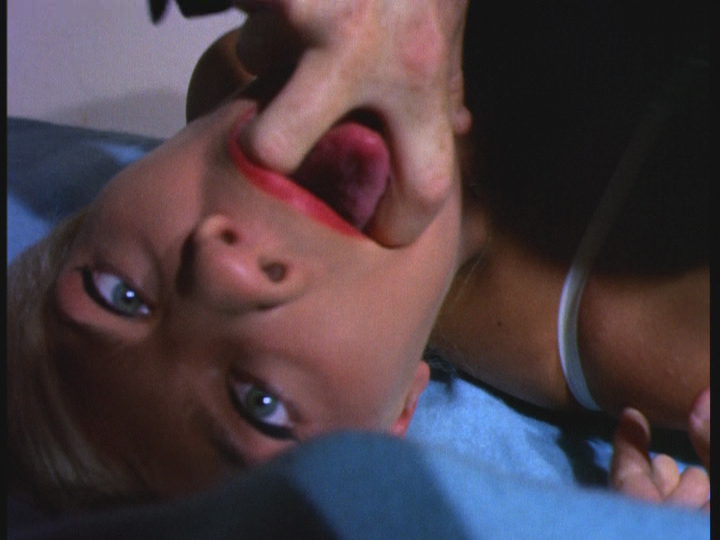 While visiting her family – her dad is the president of a seawall-and-piling construction company in Hollywood, Florida – she was spotted by movie talent scouts for an outfit modestly dubbed Box Office Spectaculars, Inc., who promptly signed her to play the heroine of a Florida-filmed, gore-splattered quickie entitled “The Blood Feast,” which will be released this month.

“It’s all about sacrificing beautiful young virgins to Egyptian deities,” says Connie. “You know, a typical, everyday kind of story. I’m rather proud of the fact that at the end of the show I’m still healthy, while every other girl is either dead or horribly mutilated. I don’t imagine we’ll win any Academy Awards, but it was fun taking time off to do it and I’d love to act in more films if I get the chance. I want to try everything. I’d hate to grow old, and look back and say to myself, ‘Now, why didn’t you at least give that a try?’ It would be a horrible feeling, not having attempted something that might have been fun.”

“I’m not an intellectual by any stretch of the imagination, but I do love to read, especially autobiographies and collections of love letters. I just finished that book of Woodrow Wilson’s love letters and it really flipped me. He looks so stolid, you know.  For the nonce, all frocks forgotten, curvilinear Connie stretches out on her bed and our gatefold, proving herself in the process a likely nominee for any design-conscious connoisseur’s Best Undressed List.

Did the script help? Connie played Terry Adams beside hero Tom White, played by William Kerwin, who was married to Mason:

Terry Adams: It was the ending of Civil War. The war between states!

Tom White: Well then you tell me why would a southern town want northerners as guests of honor at the centennial. It must has something to do with what happened a hundred years ago. So, something is very wrong with this town.

Terry Adams: What does it mean?

Tom White: It means this centennial is a centennial of blood vengeance! It means… It means we’re here to be killed!

The other sexploited female part was played by Shelby Livingstone, seen below photographed by the great Bunny Yeager. 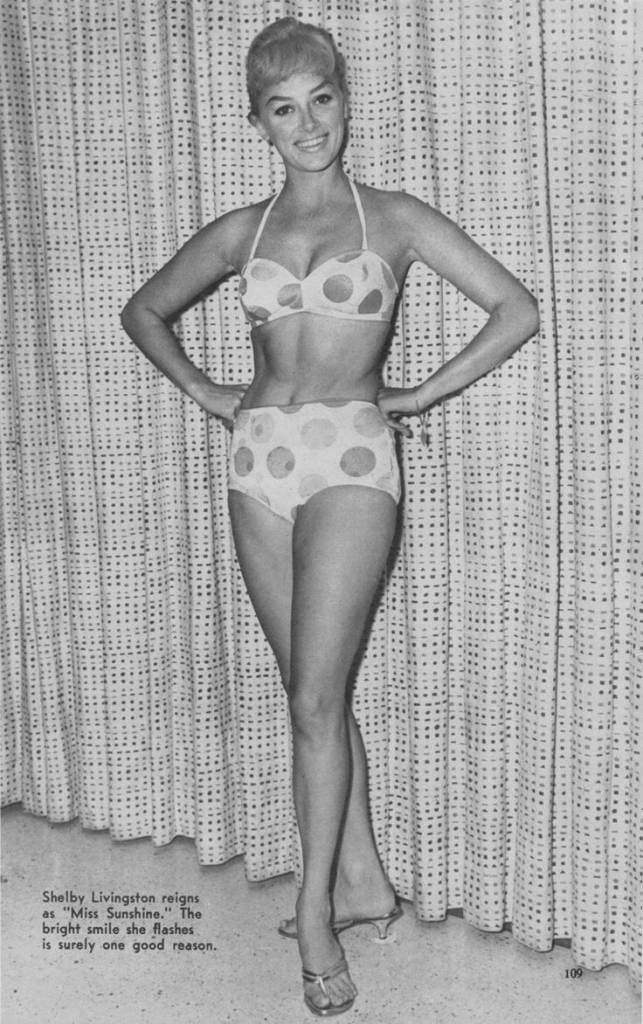 From A Taste of Blood: The Films of Herschell Gordon Lewis:

“Herschell Gordon Lewis is unsurpassed in the number of subjects he exploited in his films. In keeping with ‘making pictures that either the majors (in Hollywood) couldn’t or wouldn’t make,’ Lewis took taboos and ran with them. Whether it be rock’n’roll, birth control, juvenile delinquency, wife swapping, or extreme violence, a Lewis picture was sure to be an unpredictable, unpretentious treat.”

If what you’ve read so far hasn’t made you want to watch the splatter, Zombie Vamp has even more:

Two Thousand Maniacs! doesn’t have it all, but it does have murderous Southern rednecks, a 1963 Playboy Playmate, the worst Southern accents captured on film, terrible acting, buckets of red paint, fairly decent suspense, some surprisingly powerful images, iconic moments in the history of horror/gore, amateurish camera work, a fascinating 1960s time-capsule quality, a Twilight Zone-esque twist ending, and an above-average bluegrass score.

More? Here’s the trailer. The health warning is great:

It is tremendous fun that in a joyously perverted way celebrates innocence, as Lewis notes

Way, way back in prehistoric times I saw the original Dracula (1931). Bela Lugosi’s watermark on the pages of cinematic history. I recall only a few scenes, plus my insistence that the lights in my bedroom be left on all night long. The motivator had to be purely cosmetic, the way he glowered, plus the strange accent atop brutal word delivery. Some years later I saw this film again and laughed at the characterization. That’s how sophistication spoils pseudoreality.

And now for the main feature…