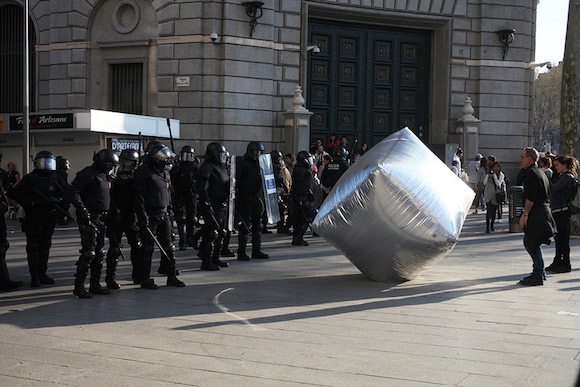 Inflatable cobblestone made by the Eclectic Electric Collective in cooperation with Enmedio for protests during the Spanish general strike in Barcelona 2012. © Oriana Eliçabe/Enmedio.info

Curator Catherine Flood – who originated the concept for Disobedient Objects at the V&A – talks me through five exhibits which embody the spirit of contemporary protest. 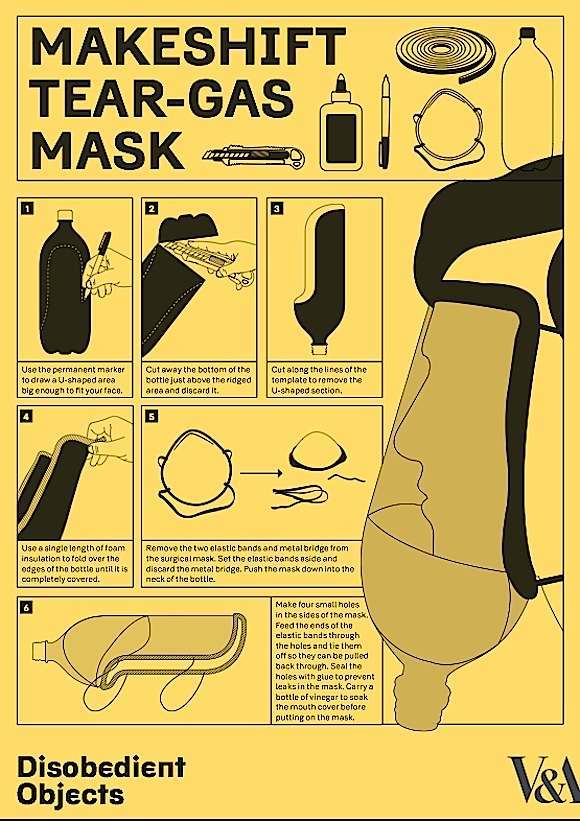 How To guide: Makeshift Tear-Gas Mask. Illustrated by Marwan Kaabour at Barnbrook

Disobedient objects are often those which are simply to hand and waiting to be re-purposed. These masks made from water bottles were used during last year’s Gezi Park protests in Istanbul as a response to the unprecedented amounts of teargas used against protestors in Taksim Square, and became symbolic – they were featured in street art and graffiti and there are photographs of whirling dervishes wearing them.

One of the key points of the exhibition is to demonstrate that excellent design can emerge from people with limited resources and not much time but brilliant ideas. These also show that design doesn’t have to be about professional practice or commercial purpose but can still make a wide impact; people also tweeted images from local chemists of the products which could be bought to make up a survival kit when gassed. As an accessible form of design we chose it for one of our “how to” guides because it is a great example of “swarm” design, documented by one group so that others can use them in different contexts.

PLACARDS IN THE DIGITAL AGE 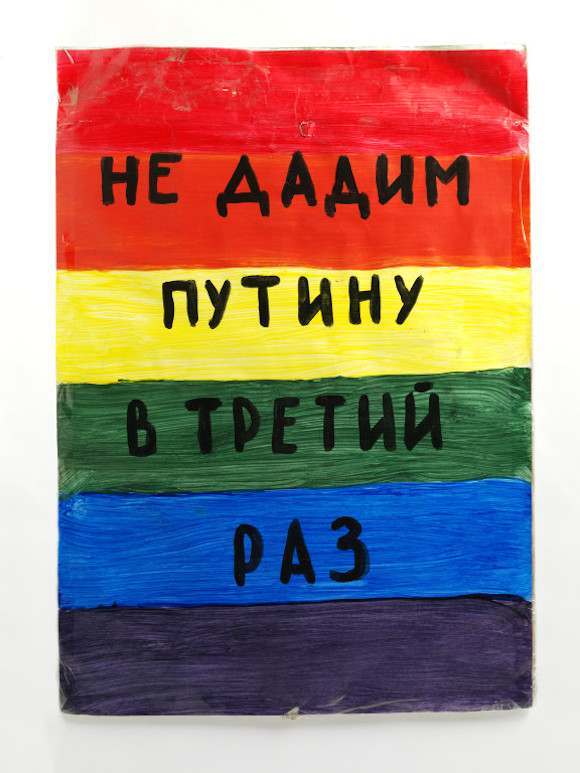 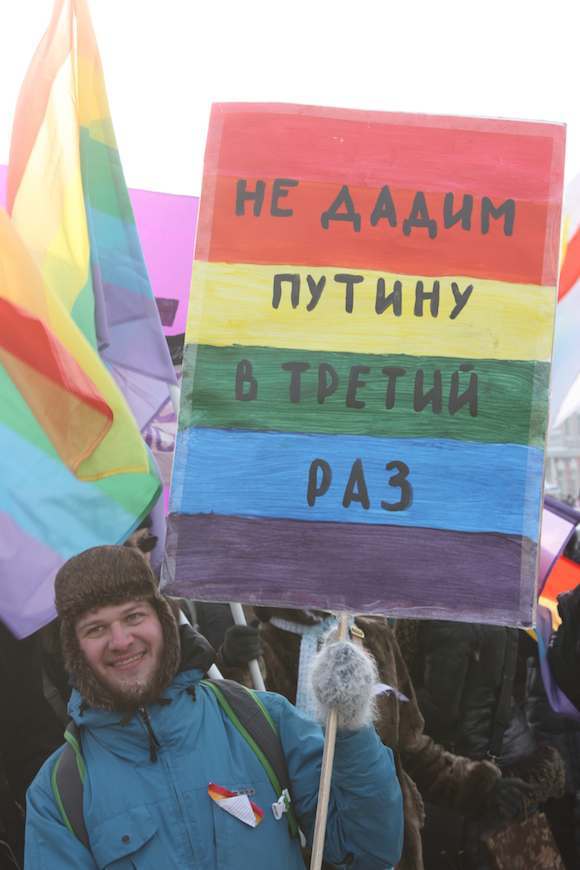 Protestor – who has subsequently had to leave Russia – with his placard, which was collected by Flood herself. She was in Moscow taking an exhibition down when the protests were on

This placard was made for demonstrations against Putin’s re-election in 2012 and marked a different style of protest in Russia: rather than a crowd united under by one slogan, hand-painted placards were produced with personal, sometimes witty messages. There’s nothing especially innovative about hand-rendered placards but this time they were used in conjunction with social media so were a bit like tweets, conveying pithy messages which were photographed and put on Twitter.

This was created by a gay rights activist and says: “We won’t give it to Putin a third time,” apparently quite a crude reference in Russia and playing on his homophobia. The protestor told us that this was the first time the LGBT Rainbow colours were used in public. He has subsequently had to leave the country. 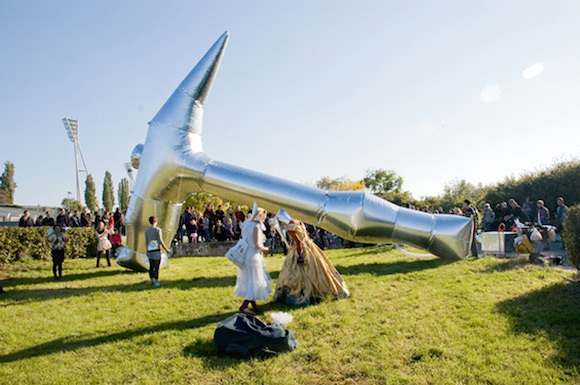 The Berlin-based Eclectic Electric Collective (now called Tools For Action) produce inflatables of protest objects such as cobblestones and hammers. When they’re thrown at police lines they change the dynamic of demonstrations; the police either become distracted by the big shiny thing or they throw it back and the exchange turns into a game, like a surreal version of volleyball.

It’s a really interesting way of occupying public space. This element of unruliness upsets the authorities because the protestors are not abiding by protocol and the accepted rules of engagement. The clever use of props – giant puppets have been used elsewhere – allows the protestors to wrest control.

In the same section of the show we have “bloc books”, painted shields in the form of giant works of literature and philosophy made by students protesting at education cuts. When they demonstrated, the students were effectively being defended by culture, and by striking the shields, the police not only invoked the destruction of books but were also forced into a performance without realising it.

This started off in Italy and was taken up in Britain and America by students who had seen them on social media.

The Eclectic Electric Collective made us a cobblestone for the exhibition. This is an issue with this material, because quite often it is destroyed in the process of protest. 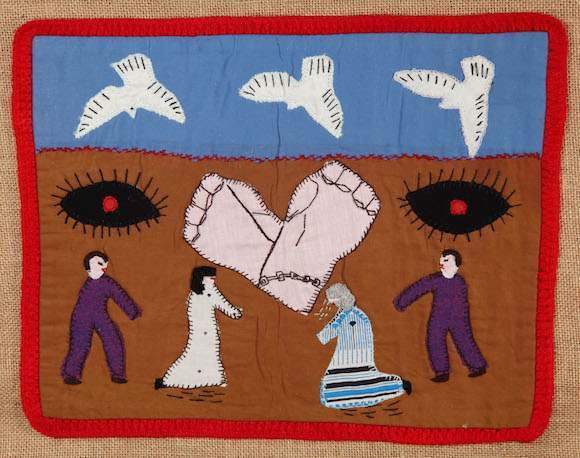 We start in the 70s and the rise of neo-liberalism; among the earliest objects in the show are Chilean appliqued textiles produced by women in workshops during the Pinochet regime. These documented the social realities of the disappearances, the tortures, the economic hardships. These worked on a number of levels.

Made from scraps of material, these were sold, so provided economic support, and in the act of gathering to make them, the women found solidarity and collective strength.

There are accounts of women saying that it was only when they had their eyes down on their sewing that they felt safety in confronting what was going on and were able to document what they were otherwise proscribed against speaking about.

These textiles often left the country, and were seen as innocent by the authorities because of their resemblance to folk art, but carried letters and communicated with the outside world. This technique spread, and we have examples from Colombia in 2010. It was also used in Ireland by women protesting against the use of Shannon Airport in extraordinary rendition. 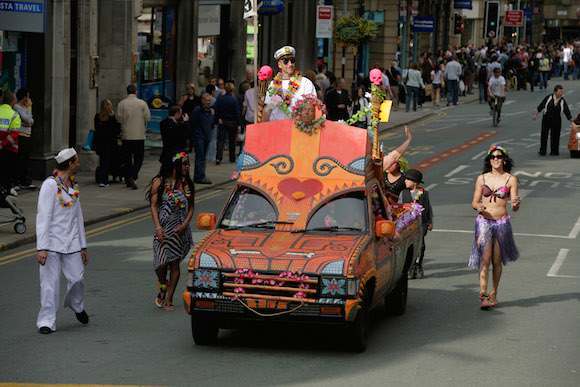 This is one of the biggest objects in the exhibition. Made by British ceramic and mosaic artist Carrie Reichardt, The Tiki Love Truck protests against the US death penalty. It’s an incredibly powerful piece, not least because it features the death mask of John Joe “Ash” Amador, who had corresponded with her and asked Carrie to be a witness at his execution.

Her friend Nick Reynolds went with her and cast the mask, which was woven into the truck and driven in the Art Car Parade in Manchester 10 days after the execution.