ON this day in photos – February 19 1968: the High Court orders damages to be paid to 62 children born with deformities, after their mothers took the drug thalidomide during pregnancy.

Thalidomide was marketed as the sedative that would alleviate morning sickness. It had been sold to unsuspecting pregnant women between 1958 and late 1961, when it was removed from the market following evidence it disrupted foetal development. 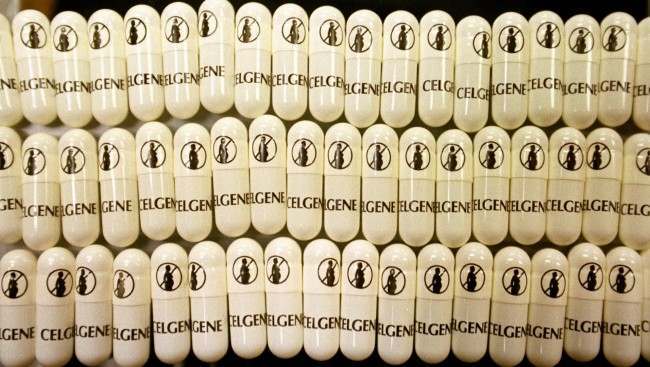 This April 7, 1998 file photo shows capsules of the drug thalidomide at the Celgene Corp. in Warren, N.J, printed with a symbol warning pregnant or soon-to-be pregnant women against use of the drug that had caused thousands of infant deformities. It was one of epic tragedies of the mid-20th century: babies born without arms and legs, sometimes deaf or blind, sometimes with brain or heart damage – all because their mothers were nauseated or sleepless during their pregnancies and given Thalidomide to ease their symptoms. While the drug was banned in 1962, it is again being prescribed – this time for treatment for multiple myeloma and other blood cancers – which its victims, now entering old age, often destitute and in increasing pain, find difficult to accept.

The drug was developed by German pharmaceutical company Grunenthal. It was, they said, the world’s first totally safe sleeping pill. 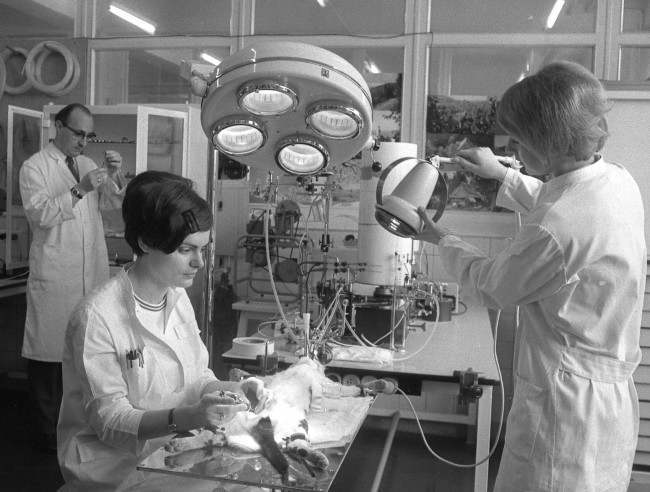 An April 21, 1969 photo from files showing a view of a laboratory of the pharmaceutical company “Chemie Gruenenthal”, in Stolberg, near Aachen, West Germany, during an animal experiment April 21, 1969 as prosecuters came to inspect the manufacturer of the drug Thalidomide, which was prescribed by doctors as harmless sleeping drug to pregnant women and caused the miscarriage and birth of thousands of crippled children. The maker of a notorious drug that caused thousands of babies to be born with shortened arms and legs or no limbs at all in the 1960’s has finally apologized. Thalidomide was given to pregnant women to combat morning sickness but led to a wave of birth defects in Europe, Australia, Canada, Japan and the U.S. Despite the words of contrition, the drug maker Gruenenthal has refused to settle lawsuits, the most recent involving class actions in Australia.

In 2012, Gruenenthal finally apologised. Although the apology included this pathetic line:

We also apologize for the fact that we have not found the way to you from person to person for almost 50 years.

The German manufacturers Grunenthal have never admitted liability to the British victims nor have they contributed to the Thalidomide Trust. A statement from Grunenthal said: “Thalidomide is part of our history and always will be and we have accepted a responsibility to offer help. We have no legal responsibility to compensate individuals affected.

On Christmas Day in 1956 the daughter of a Grünenthal employee was born with no ears. She was the drug’s first victim. This was an international horror story. 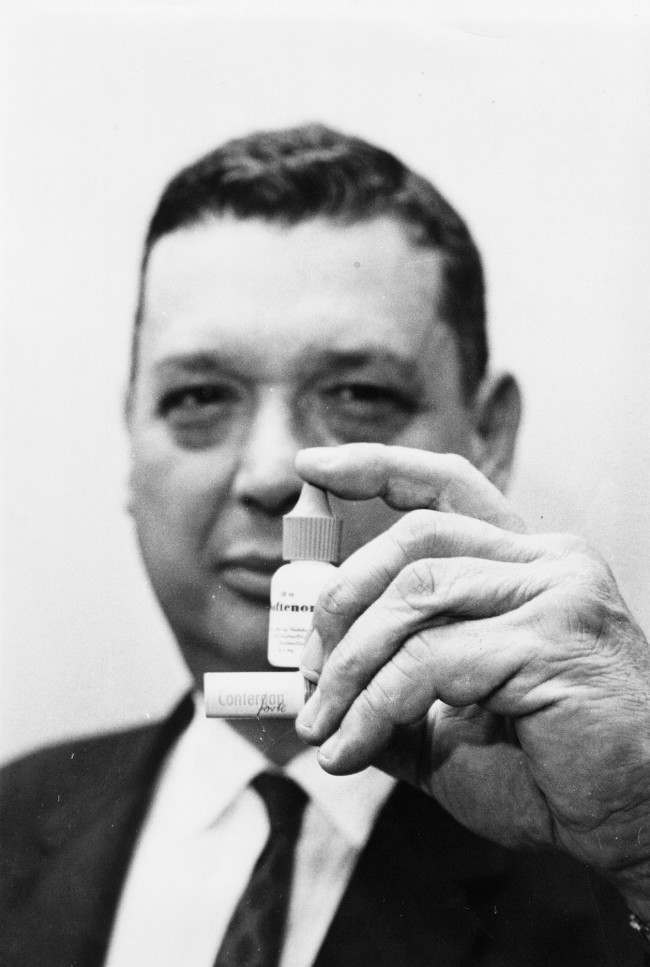 Dr. George James, acting New York City health commissioner, holds containers of the drug Thalidomide, blamed for recent births of deformed children. He said the containers were brought in by persons who read about the drug. James said one, under the trade name Soltenon, was purchased in Ireland, while the other, called Contergan, was bought in West Germany. Date: 27/07/1962 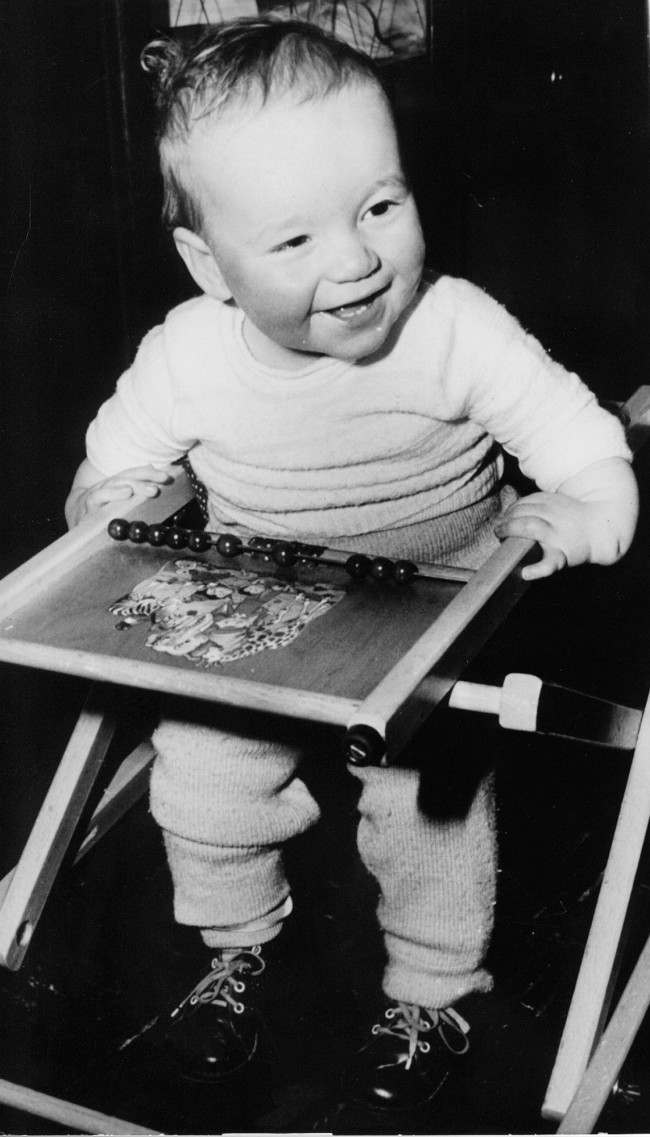 Contergan trial in Hamburg – The first so-called Contergan trial in West Germany was held in Hamburg because a father of a misshaped child started action for damages against the producer of the drug which contains Thalidomide. The child of 36-year-old Guenther Sempf from Hamburg was born with so-called “seal hands”. His 32-year-old wife Ingeborg consumed this drug during her pregnancy on advice of her physician. Date: 23/01/1963 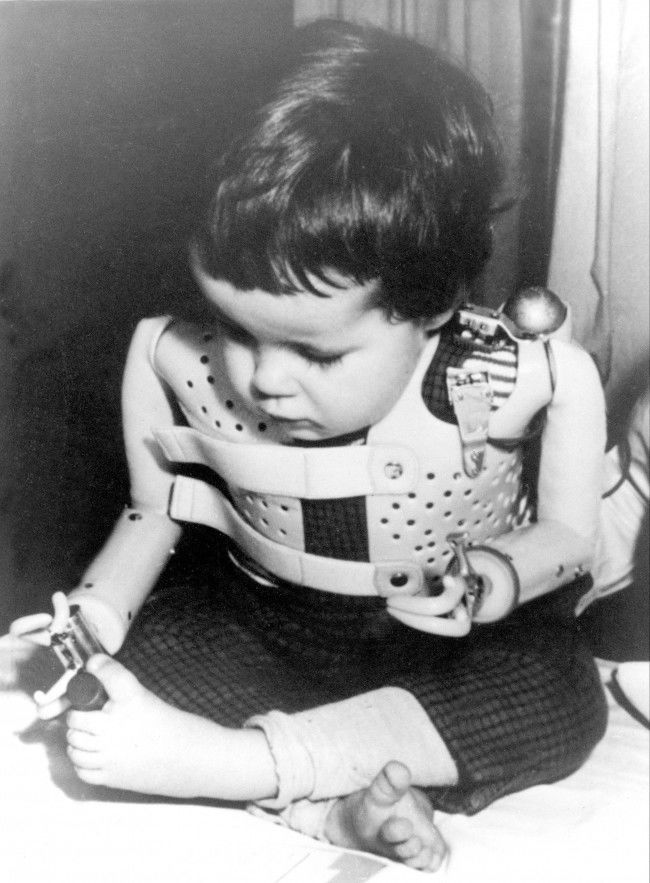 A three-year-old girl, born without arms to a German mother who took the drug thalidomide, uses power-driven artificial arms fitted to her by Dr. Ernst Marquardt of the University of Heidelberg in Germany, 1965. The child activates the artificial arms by moving her shoulders. Date: 01/01/1965

November 1962 in a Belgian court a mother and her accomplice’s get mercy for child murder. 50 years ago society applauded the disability hate crime of the decade. The right to life denied a child by her own mother. Corrine Vandeput, a child born with thalidomide damage was given a lethal dose of barbituate by her mother Suzanne Vandeput. On trial for five days this case was given worldwide attention and caused riots in the streets of belgium. 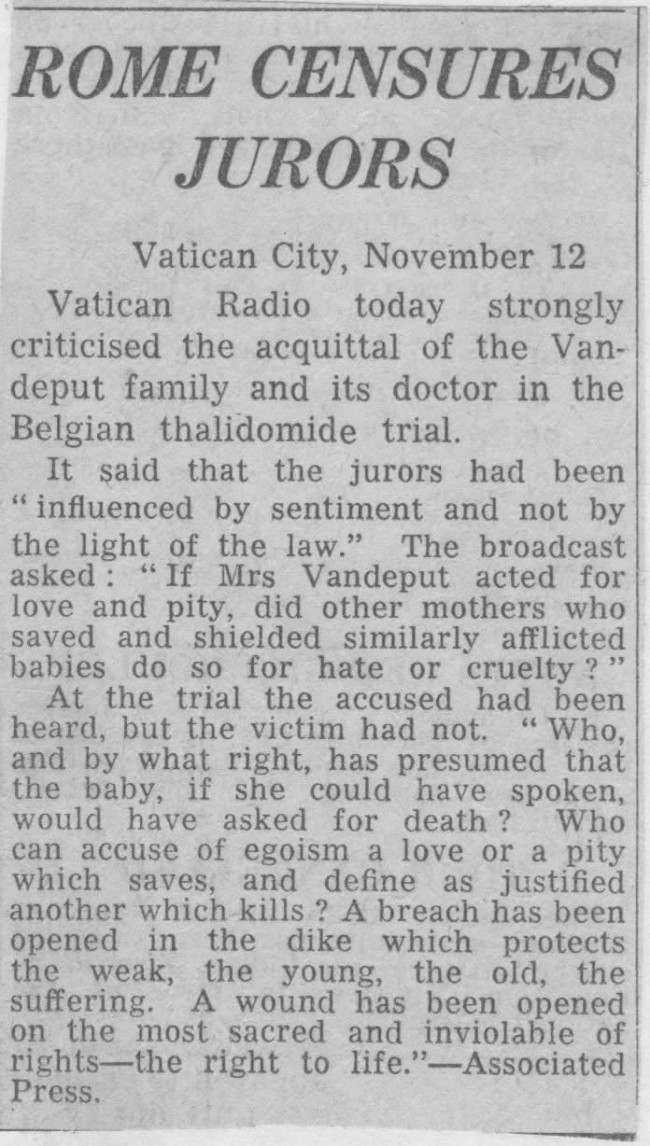 In the UK it was produced by Distillers Company (Biochemicals) Ltd. Mr Justice Hinchcliffe stated:

“It is in the interests of the infant plaintiffs and their parents, and it reflects great credit on all those who have taken part in negotiating it.”

But it wasn’t much. Lady Hoare, founder of the Lady Hoare Trust for thalidomide children, was unimpressed by the settlement:

“Even for this number this amount of recompense can never recompense for the disaster that’s happened.” 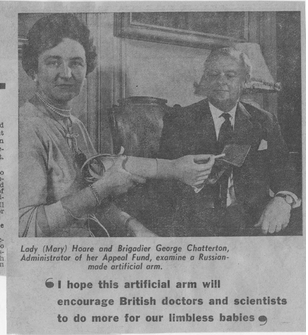 Lady Hoare was a powerful force in helping the victims get recognition. 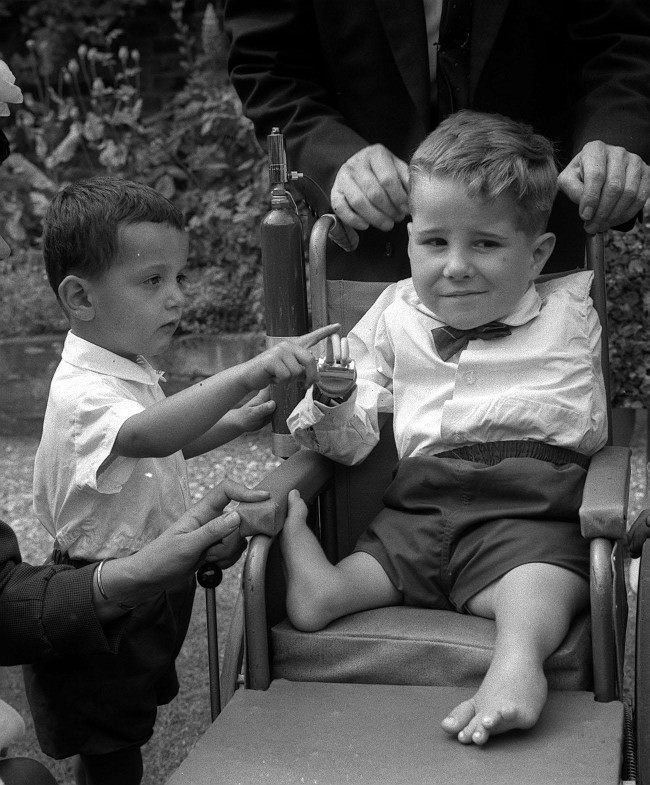 A Thalidomide baby born without arms at a party given at Hamilton Terrace, London to mark the first anniversary of Lady Hoare Thalidomide Appeal. Date: 24/07/1963 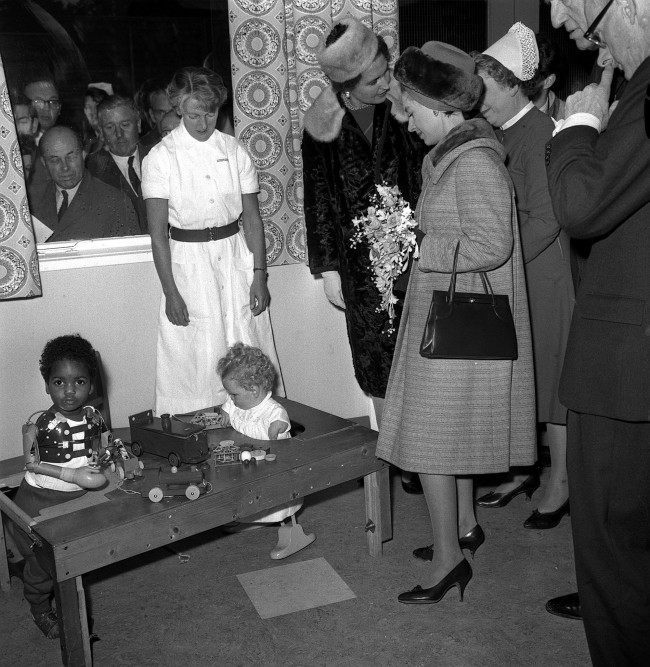 A movement to make those responsible pay the victims was underway. 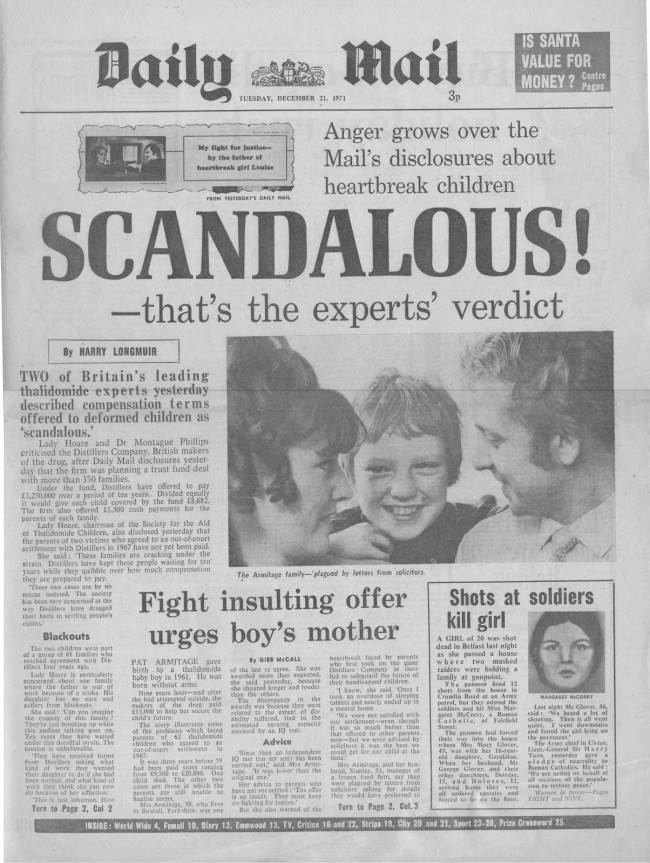 In late 1972, The Sunday Times reported “Our Thalidomide Children, a Cause for National Shame.”  Under the editorship of Harold Evans, the paper focused on the “plight of hundreds of British Thalidomide children who had never had any compensation for severe birth defects some had suffered. This turned into a campaign for the newspaper’s Insight investigative team, and Evans himself took on the drug companies responsible for the manufacture of Thalidomide, pursuing them through the English courts and eventually gaining victory in the European Court of Human Rights. As a result, the victims’ families won compensation after more than a decade. Moreover, the British Government was compelled to change the law inhibiting the reporting of civil cases.” 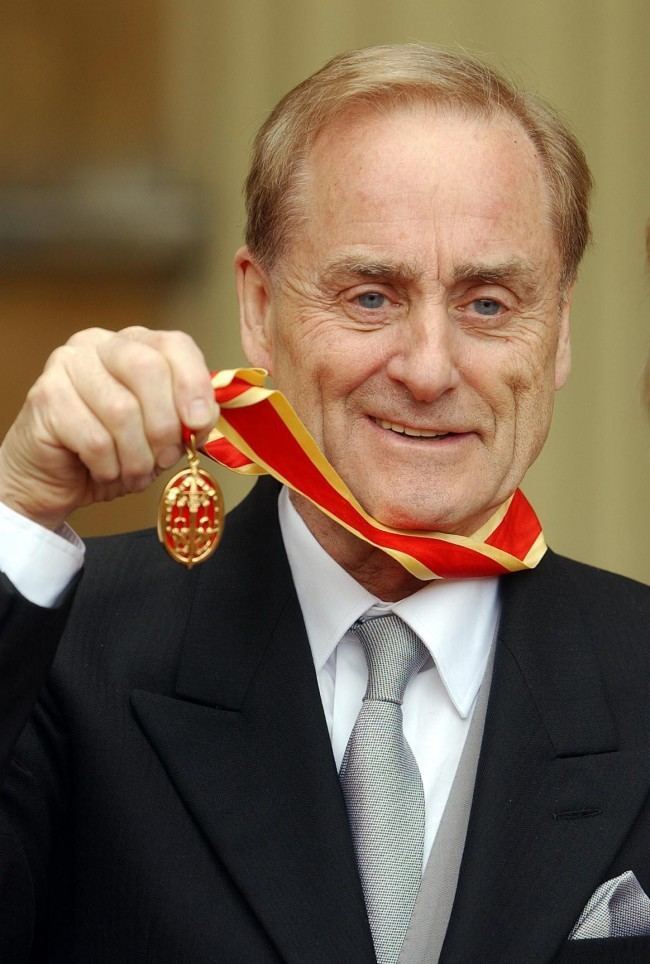 Sir Harold Evans at Buckingham Palace in London, after he was knighted by the Prince of Wales for service to journalism. The son of a railway worker, Sir Harold rose through the ranks to become editor of the Northern Echo and was in charge of the Sunday Times when it reported on the effect of the drug thalidomide on pregnant women.

It was not until November 1972 when The Sunday Times financially assisted a small group of private shareholders to purchase of the full 250,000 Distillers shareholder list for $4000 and the information was made public, did the investors apply pressure to the Distillers company to provide any responsible level of compensation

In this article The Sunday Times reports that Legal and General Assurance Society and the General and Municipal works union begin to flex their financial and social power on behalf of the thalidomide children. Shame no one listened to Ralph Nadir from the States advice he was on the right track.

A footnote in this Series of articles announced that “in a future article The Sunday Times would trace how the tragedy occurred”. On 17 November 1972, the Divisional Court of the Queen’s Bench Division granted the Attorney-General’s application for an injunction restraining publication of this future article on the ground that it would constitute contempt of court.

In the fight for justice The Sunday Times support for parents who decided to fight on for a better deal meant conflict, parents had been fighting in the courts in the futile hope for legal justice for 10 years, with cases still going through the courts at the time. Under the Contempt laws which existed at the time, the media were prevented from publishing a great range of information about the way Thalidomide had been developed and distributed . The legal battle against the injunction which went all the way through the British legal system to the European Court of Human Rights in 1979 and which led to the Contempt of Court Act two years later in 1981

But it hasn’t ended. Did the drug damage the victims’ children? 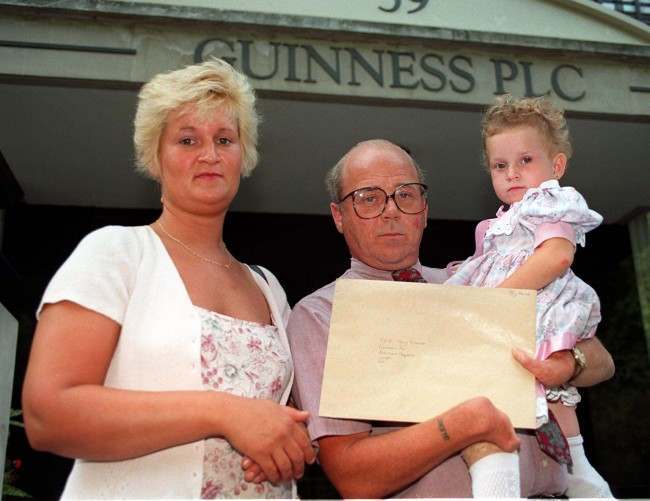 Four-year-old Georgina Harrison with her mother, Deborah and father, Glenn outside the London office of Guinness plc today (Tuesday) where they presented the company with new evidence which suggests that the effects of the thalidomide drug could be hereditary. Georgina, daughter of Mr Harrison, a thalidomide victim himself, was born with deformities akin to those prevalent in thalidomide cases.

A new scientific study seen exclusively by the BBC indicates that the drug Thalidomide is still causing birth defects in Brazil today. It’s been given to people suffering from leprosy to ease some of their symptoms, and some women have taken it unaware of the risks they run when pregnant…

But in Brazil the drug was re-licensed in 1965 as a treatment for skin lesions, one of the complications of leprosy…

Schuler-Faccini and other researchers from the Universidade Federal do Rio Grande do Sul in Porto Alegre looked at the birth records of 17.5 million babies born between 2005 and 2010. “We looked at all children with limb defects and those with the characteristic defects of Thalidomide,” Schuler-Faccini says. “We compared the distribution of Thalidomide tablets… with the number of limb defects and there was a direct correlation. The bigger the amount of pills in each state the higher the number of limb defects.”

In the same 2005-2010 period, 5.8 million Thalidomide pills were distributed across Brazil. 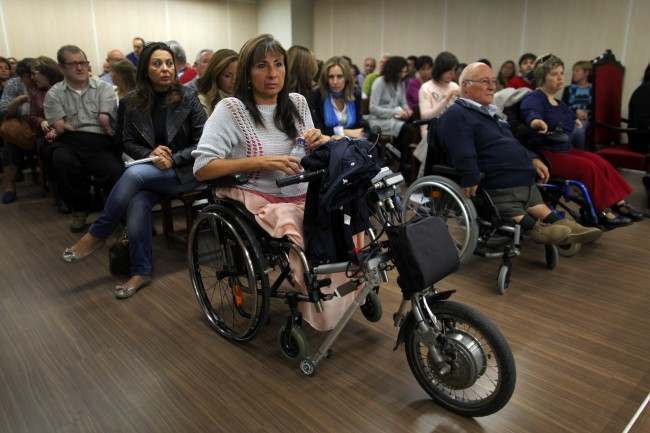 Spaniards born with severe defects wait for the trial against German company Gruenenthal Group to start at the Court in Madrid, Spain, Monday, Oct. 14, 2013. Spaniards born with severe defects after their mothers used the drug Thalidomide during their pregnancies are suing its producer, the German company Gruenenthal Group. The Monday trial will last one day and a ruling is expected within a month. Many of the children of the mothers who took the drug, a sedative prescribed between 1950 and 1960 to combat morning sickness, were born with abnormally short limbs and in some cases without any arms, legs or hips. Gruenenthal, who withdrew Thalidomide in 1961, has refused to accept liability, but last year it apologised to victims.
Date: 14/10/2013