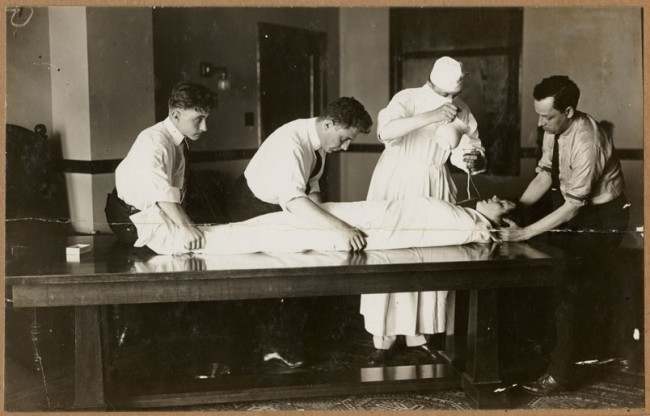 On September 6 1914, the prolific writer, artist and journalist Djuna Barnes wrote How It Feels To Be Forcibly Fed for The World Magazine. Barnes was a reporter working on a series of “stunt stories”. 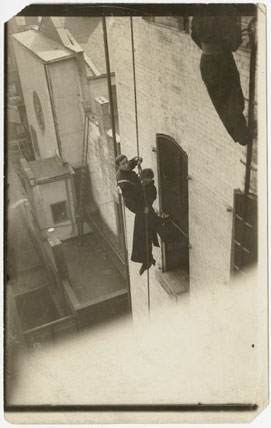 This photograph was taken to accompany “My Adventures Being Rescued,” an article that recounts how Barnes attended a firefighters’ training session and played at being saved three times. While Barnes’s instinct to insert herself into her chosen stories gave her ample opportunity to showcase her courage and evocative prose, it also carried real danger, as demonstrated when a homemade airplane she was to ride in crashed, killing all those aboard. Spotter

She would be forced fed as the hunger-striking suffragists were. She would put their horror into words. 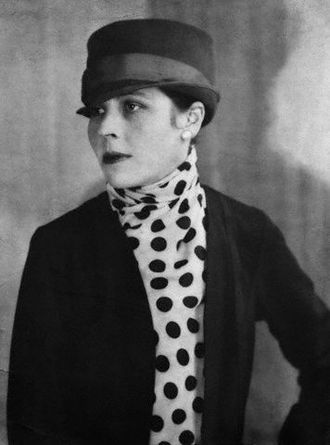 In some ways, Barnes comes across as a progressive 1920s lesbian version of Geraldo Rivera. She inserted herself into all sorts of situations, undergoing force-feeding similar to what suffragettes in the UK underwent in prison, hanging out with the first captive gorilla to survive (not for long) in the US, and reporting from the front lines of the sun-streaked throngs at Coney Island. But always beneath the set decoration and frenetic energy there’s a desire to draw attention to the daily lives and realities of people rarely discussed in the dailies of the time. 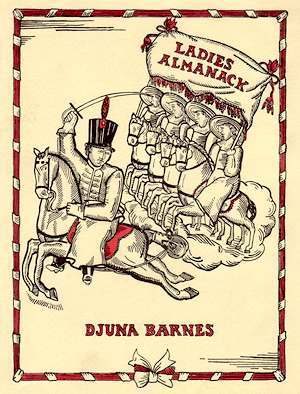 The American novelist Djuna Barnes wrote ‘Nightwood’ which has been described as one of the greatest novels of the twentieth century, ranking alongside the work of James Joyce or T.S Eliot, yet few have heard of it. Barnes was a famous figure in Paris in the 1920’s and 30’s, and now one of her earlier books, The Ladies’ Almanack, has been re-issued. It’s a tongue in cheek parody of her life in Paris and the sexual exploits of the women she met there. In her life time she never gained the fame and success of many of her contemporaries and ended her days at the age of 90 in relative obscurity and poverty. 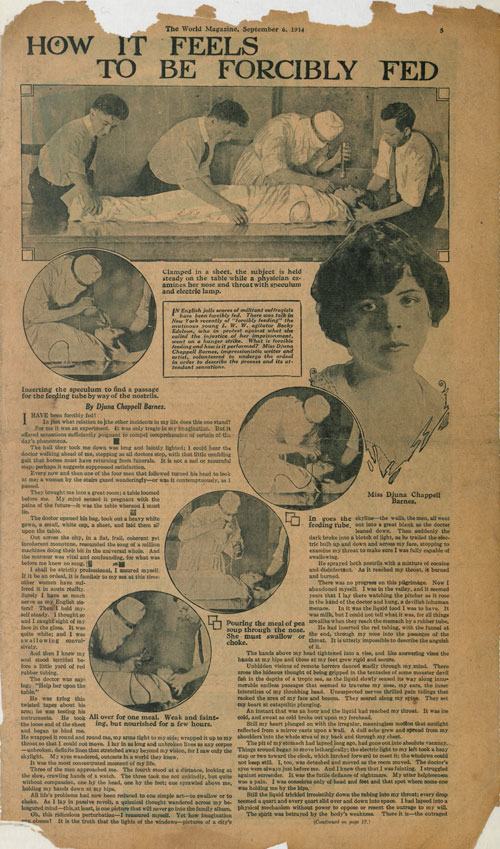 I have been forcibly fed!

In just what relation to the other incidents in my life does this one stand? For me it was an experiment. It was only tragic in my imagination. But it offered sensations sufficiently poignant to compel comprehension of certain of the day’s phenomena.

The hall they took me down was long and faintly lighted. I could hear the doctor walking ahead of me, stepping as all doctors step, with that little confiding gait that horses must have returning from funerals. It is not a sad or mournful step; perhaps it suggests suppressed satisfaction.

Every now and then one of the four men that followed turned his head to look at me; a woman by the stairs gazed wonderingly — or was it contemptuously — as I passed.

They brought me into a great room. A table loomed before me; my mind sensed it pregnant with the pains of the future — it was the table whereon I must lie.

The doctor opened his bag, took out a heavy, white gown, a small white cap, a sheet, and laid them all upon the table.

Out across the city, in a flat, frail, coherent yet incoherent monotone, resounded the song of a million machines doing their bit in the universal whole. And the murmur was vital and confounding, for what was before me knew no song.

I shall be strictly professional, I assured myself. If it be an ordeal, it is familiar to my sex at this time; other women have suffered it in acute reality. Surely I have as much nerve as my English sisters? Then I held myself steady. I thought so, and I caught sight of my face in the glass. It was quite white; and I was swallowing convulsively.

And then I knew my soul stood terrified before a little yard of red rubber tubing.

The doctor was saying, ‘Help her upon the table.’

He was tying thin, twisted tapes about his arm; he was testing his instruments. He took the loose end of the sheet and began to bind me: he wrapped it round and round me, my arms tight to my sides, wrapped it up to my throat so that I could not move. I lay in as long and unbroken lines as any corpse — unbroken definite lines that stretched away beyond my vision, for I saw only the skylight. My eyes wandered, outcasts in a world they knew.

It was the most concentrated moment of my life.

Three of the men approached me. The fourth stood at a distance, looking at the slow, crawling hands of a watch. The three took me not unkindly, but quite without compassion, one by the head, one by the feet; one sprawled above me, holding my hands down at my hips.

All life’s problems had now been reduced to one simple act — to swallow or to choke. As I lay in passive revolt, a quizzical thought wandered across my beleaguered mind: This, at least, is one picture that will never go into the family album.

Oh, this ridiculous perturbation! — I reassured myself. Yet how imagination can obsess! It is the truth that the lights of the windows — pictures of a city’s skyline — the walls, the men, all went out into a great blank as the doctor leaned down. Then suddenly the dark broke into a blotch of light, as he trailed the electric bulb up and down and across my face, stopping to examine my throat to make sure I was fully capable of swallowing.

He sprayed both nostrils with a mixture of cocaine and disinfectant. As it reached my throat, it burned and burned.

There was no progress on this pilgrimage. Now I abandoned myself. I was in the valley, and it seemed years that I lay there watching the pitcher as it rose in the hand of the doctor and hung, a devilish, inhuman menace. In it was the liquid food I was to have. It was milk, but I could not tell what it was, for all things are alike when they reach the stomach by a rubber tube.

He had inserted the red tubing, with the funnel at the end, through my nose into the passages of the throat. It is utterly impossible to describe the anguish of it.

The hands above my head tightened into a vise, and like answering vises the hands at my hips and those at my feet grew rigid and secure.

Unbidden visions of remote horrors danced madly through my mind. There arose the hideous thought of being gripped in the tentacles of some monster devil fish in the depths of a tropic sea, as the liquid slowly sensed its way along innumerable endless passages that seemed to traverse my nose, my ears, the inner interstices of my throbbing head. Unsuspected nerves thrilled pain tidings that racked the area of my face and bosom. They seared along my spine. They set my heart at catapultic plunging.

An instant that was an hour, and the liquid had reached my throat. It was ice cold, and sweat as cold broke out upon my forehead.

Still my heart plunged on with the irregular, meaningless motion that sunlight reflected from a mirror casts upon a wall. A dull ache grew and spread from my shoulders into the whole area of my back and through my chest.

The pit of my stomach had lapsed long ago, had gone out into absolute vacancy. Things around began to move lethargically; the electric light to my left took a hazy step or two toward the clock, which lurched forward to meet it; the windows could not keep still. I, too, was detached and moved as the room moved. The doctor’s eyes were always just before me. And I knew then that I was fainting. I struggled against surrender. It was the futile defiance of nightmare. My utter hopelessness was a pain. I was conscious only of head and feet and that spot where someone was holding me by the hips.

Still the liquid trickled irresistibly down the tubing into my throat; every drop seemed a quart, and every quart slid over and down into space. I had lapsed into a physical mechanism without power to oppose or resent the outrage to my will.

The spirit was betrayed by the body’s weakness. There it is — the outraged will. If I, playacting, felt my being burning with revolt at this brutal usurpation of my own functions, how they who actually suffered the ordeal in its acutest horror must have flamed at the violation of the sanctuaries of their spirits.

I saw in my hysteria a vision of a hundred women in grim prison hospitals, bound and shrouded on tables just like this, held in the rough grip of callous warders while white-robed doctors thrust rubber tubing into the delicate interstices of their nostrils and forced into their helpless bodies the crude fuel to sustain the life they longed to sacrifice.

Science had, then, deprived us of the right to die.

Still the liquid trickled irresistibly down the tubing into my throat.

Was my body so inept, I asked myself, as to be incapable of further struggle? Was the will powerless to so constrict that narrow passage to the life reservoir as to dam the hated flow? The thought flashed a defiant command to supine muscles. They gripped my throat with strangling bonds. Ominous shivers shook my body.

‘Be careful — you’ll choke,’ shouted the doctor in my ear.

One could still choke, then. At least one could if the nerves did not betray.

And if one insisted on choking — what then? Would they — the callous warders and the servile doctors — ruthlessly persist, even with grim death at their elbow?

Think of the paradox: those white robes assumed for the work of prolonging life would then be no better than shrouds; the linen envelope encasing the defiant victim a winding sheet.

Limits surely there are to the subservience even of those who must sternly execute the law. At least I have never heard of a militant choking herself into eternity.

It was over. I stood up, swaying in the returning light; I had shared the greatest experience of the bravest of my sex. The torture and outrage of it burned in my mind; a dull, shapeless, wordless anger arose to my lips, but I only smiled. The doctor had removed the towel about his face. The little, red mustache upon his upper lip was drawn out in a line of pleasant understanding. He had forgotten all but the play. The four men, having finished their minor roles in one minor tragedy, were already filing out at the door.

‘Isn’t there any other way of tying a person up?’ I asked. ‘That thing looks like — ‘