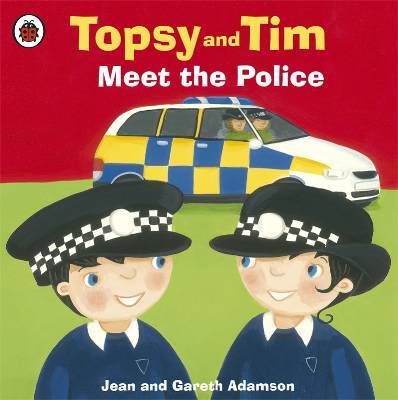 THE arrival of a new Ladybird book is always a cause of rejoicing, particularly if it is part of the popular ‘Topsy and Tim’ series, which aims to “reassure young children having first experiences of their own“.

In Topsy and Tim Meet the Police, the forthcoming addition to the series, the twins’ class is visited by two police officers, who explain to the children what their jobs involve:

“Topsy and Tim find out about stranger danger, learn about safe places to play, and even get to visit the police station themselves when they find somebody’s belongings.”

This is not the first Ladybird book to deal with the subject of the police. In 1962 The Policeman was published as part of the ‘People at Work’ series, and went on to be a bestseller. It described the policeman’s job in simple terms and was illustrated by John Berry’s distinctive paintings.

Here, for example, is a policeman with a dog (Blackie) and a lady:

“This lady is really a man called Malcolm. See how Blackie looks at Malcolm in a funny way. He wants to bite Malcom’s face.”

Actually, come to think of it, let’s look at another page. Ah, here’s a good one, with some children patting a police horse:

“Here we can see that even when there is a noisy crowd, the police horse is standing very still. This is because it has been stuffed. Under its hooves there are wheels.”

Well, I’m afraid that we’re going to have to stop here. It appears that a rather silly and pathetic person has changed the words in this book. He calls himself ‘Anon’ which means he doesn’t want to say who he really is. The police call it “giving a false name“.

Fortunately this has come to the attention of the police themselves. One officer has circulated this pretend version to his colleagues. Unfortunately they seem to find it amusing. But luckily his superiors don’t, and they have punished him.

This book is called a ‘spoof’. That means it isn’t a proper book. If you want to read this spoof, you can do so below. But ask your mummy or daddy first.

By ‘The Angry red Tomato’