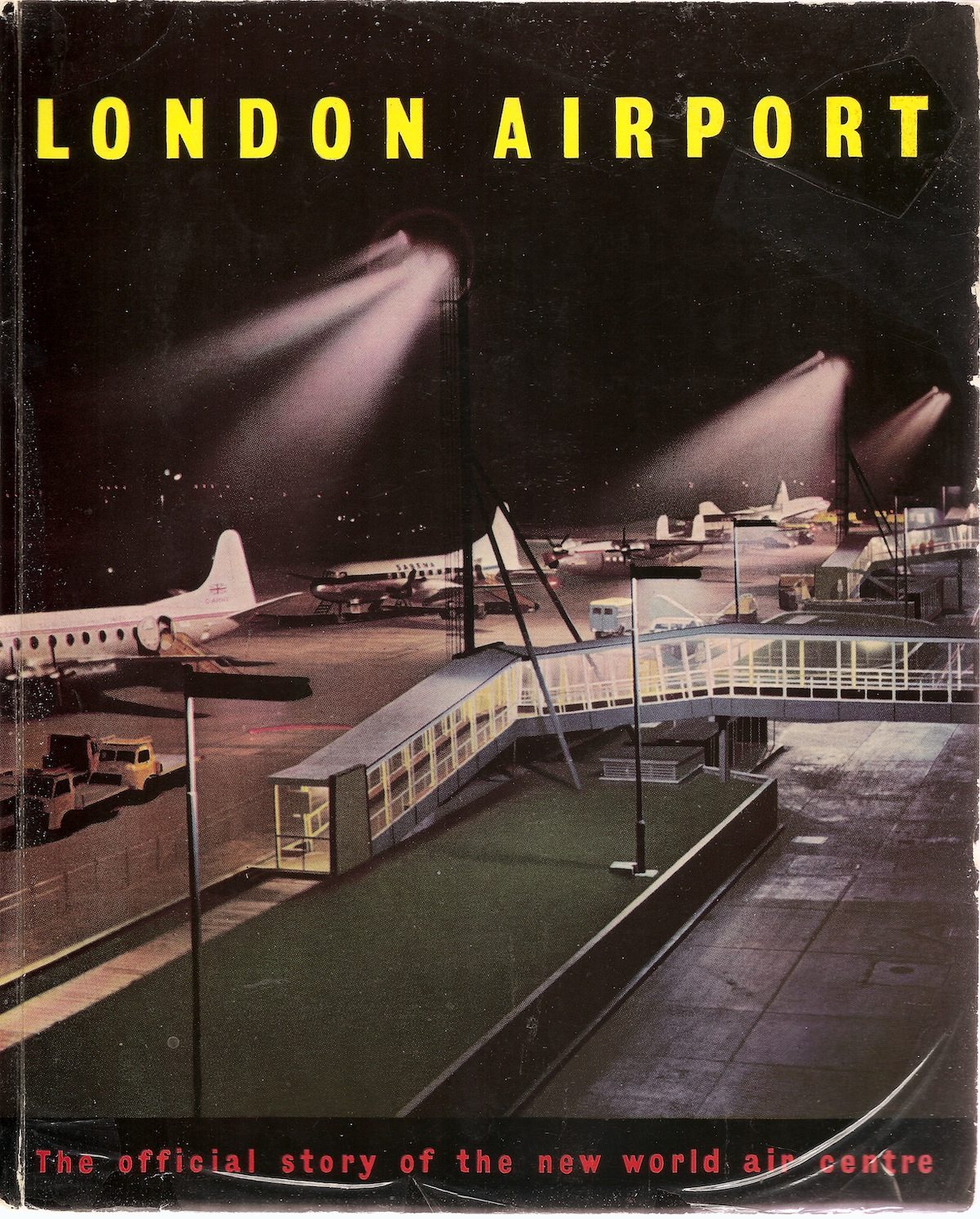 The Guide to London Heathrow Airport – 1956.

As far as I’m aware the official title “London Airport” was dropped in 1966 when it became “London Heathrow Airport“, says Mike Ashworth, who scanned this terrific artefact. I suppose this was to accommodate the ‘other’ London airports at Gatwick and Stansted.

As well as the ‘official’ guides published by the airport themselves other publishers got in on the act and this is one of the once numerous booklets issued by Pitkin Pictorials. The series was founded by one Mr Pitkin in c. 1946 and published soft backed booklets about special occasions or places associated with British themes – the Royal Family featured heavily. The imprint is still on the go.

For this one Sir Miles Thomas has been drafted in as author, a person heavily involved in the airline business as, after post-WW1 experience with Morris Motors, he rose to be chairman of BOAC until he fell out with the Minister of Transport in 1956 and resigned.

The other ‘personality’ mentioned in the booklet is the ‘Commandant of London Airport’, how grand a title and a sign of the military involvement in civil aviation at the time, Air Marshal Sir John D’Albiac KBE CB DSO RAF (Ret’d) who had a long and distinguished career in the Air Force.

The stirring front cover (annoyingly anonymous) shows a BOAC flight over the airport and is, I think, one of the Bristol 175 Britannia turboprop airliners (G-GNBA?) that are shown in the book as being “in the course” of delivery. I always liked the BOAC livery. The back cover shows the plan of the airport making a strong point of the main buildings being at the hub of the runways and the famous access tunnel that was described as a ‘considerable engineering feat’. 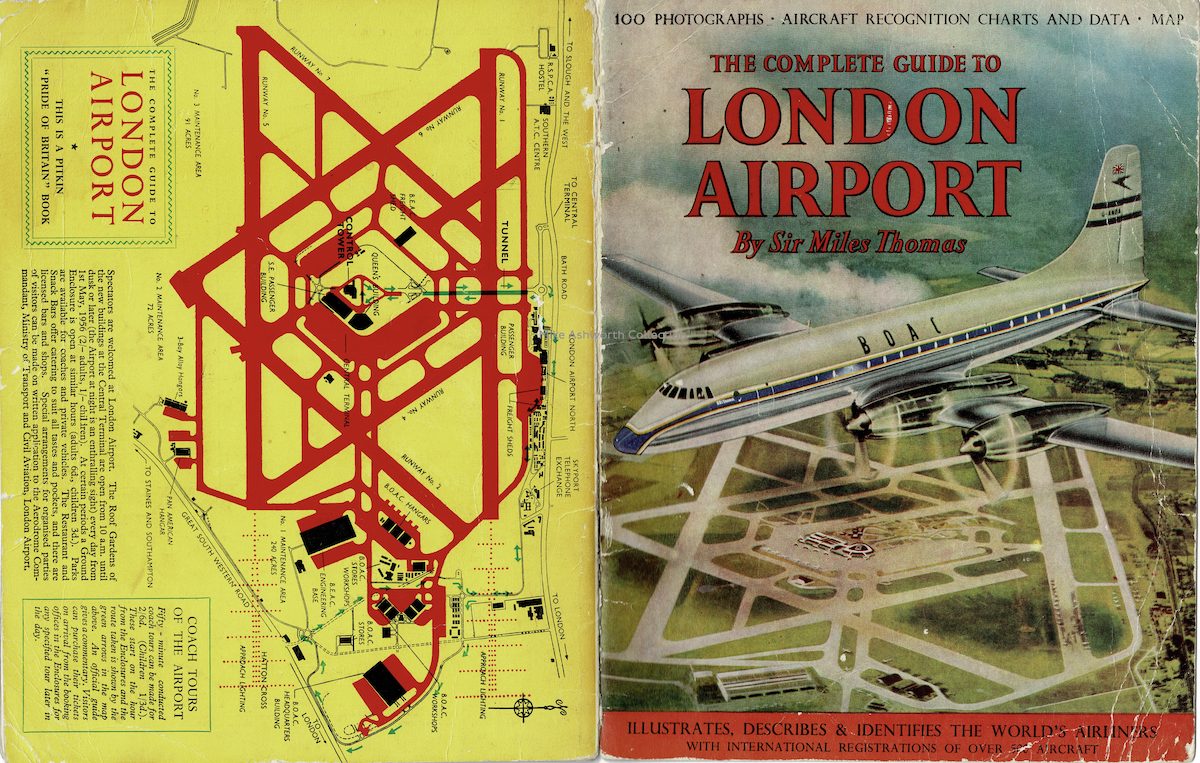 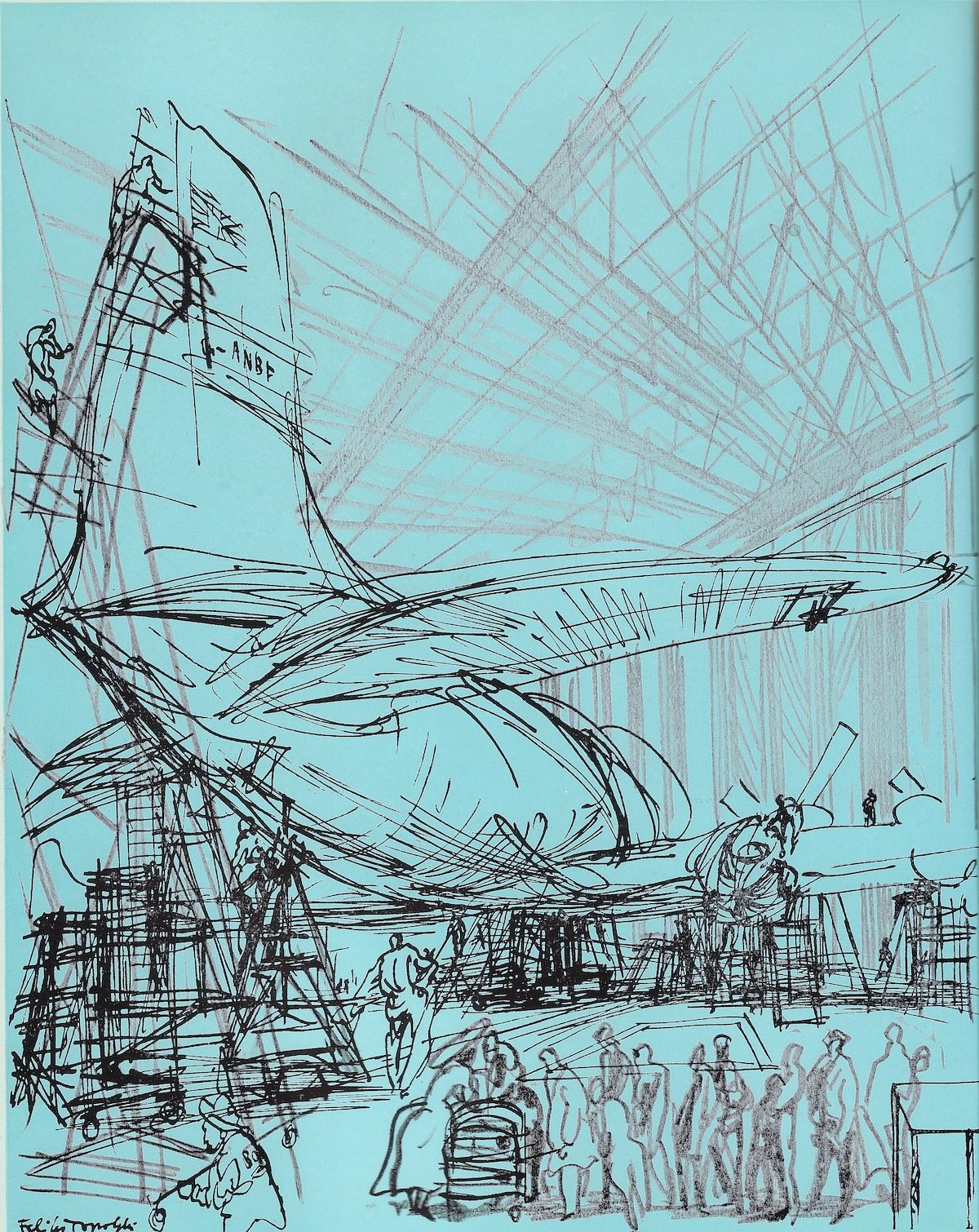 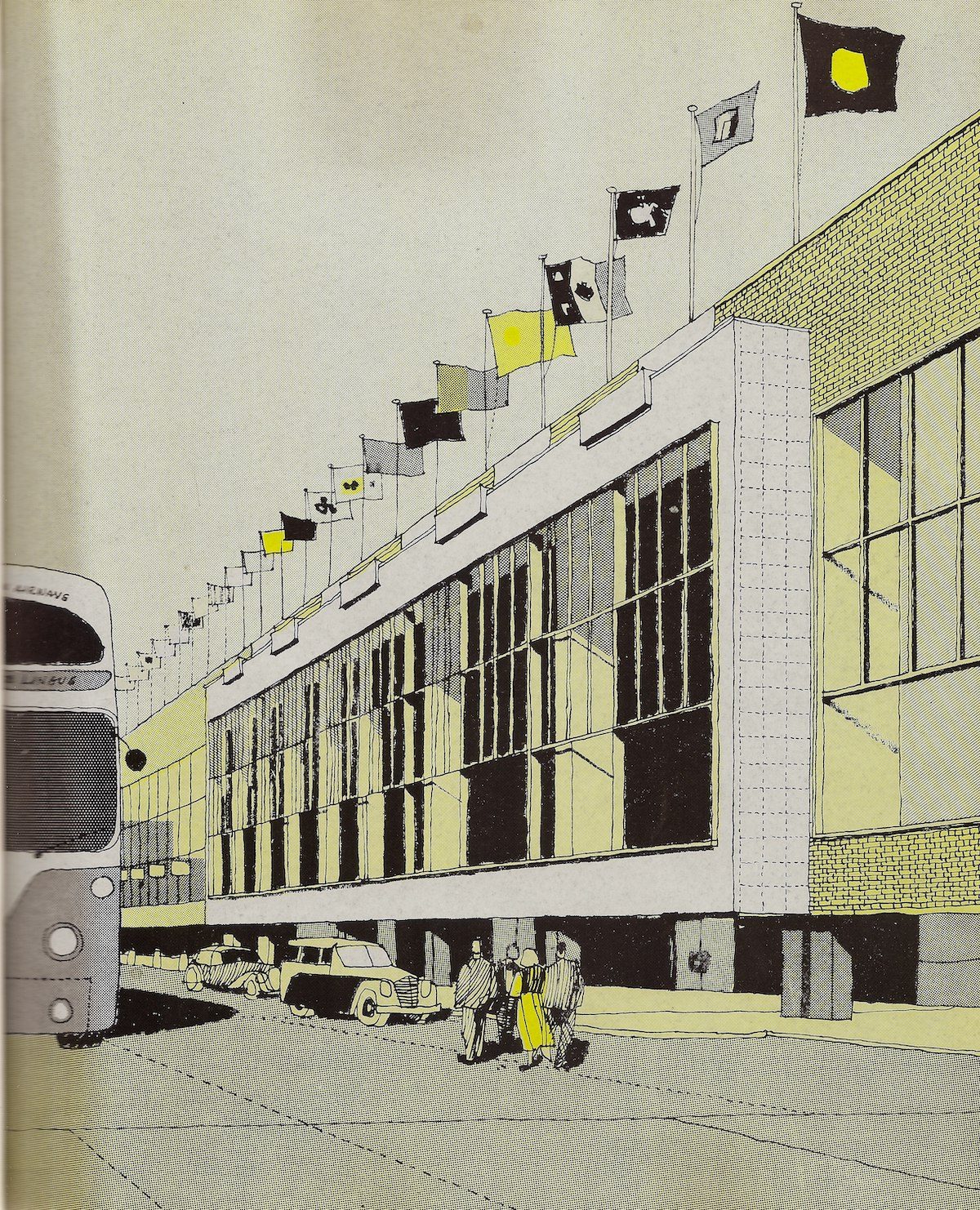 The ‘new’ London Airport at Heathrow, redeveloped as the capital’s main airport in post-WW2 years to an overall plan developed by the architect Sir Frederick Gibbard, was one of the wonders of the capital and many thousands of people visited it as a tourist attraction even if air travel was beyond their purse. The airport had first come into use as a military airfield in 1944 and so was almost redundant when built for military use and so was taken over by the Ministry of Civil Aviation for development. 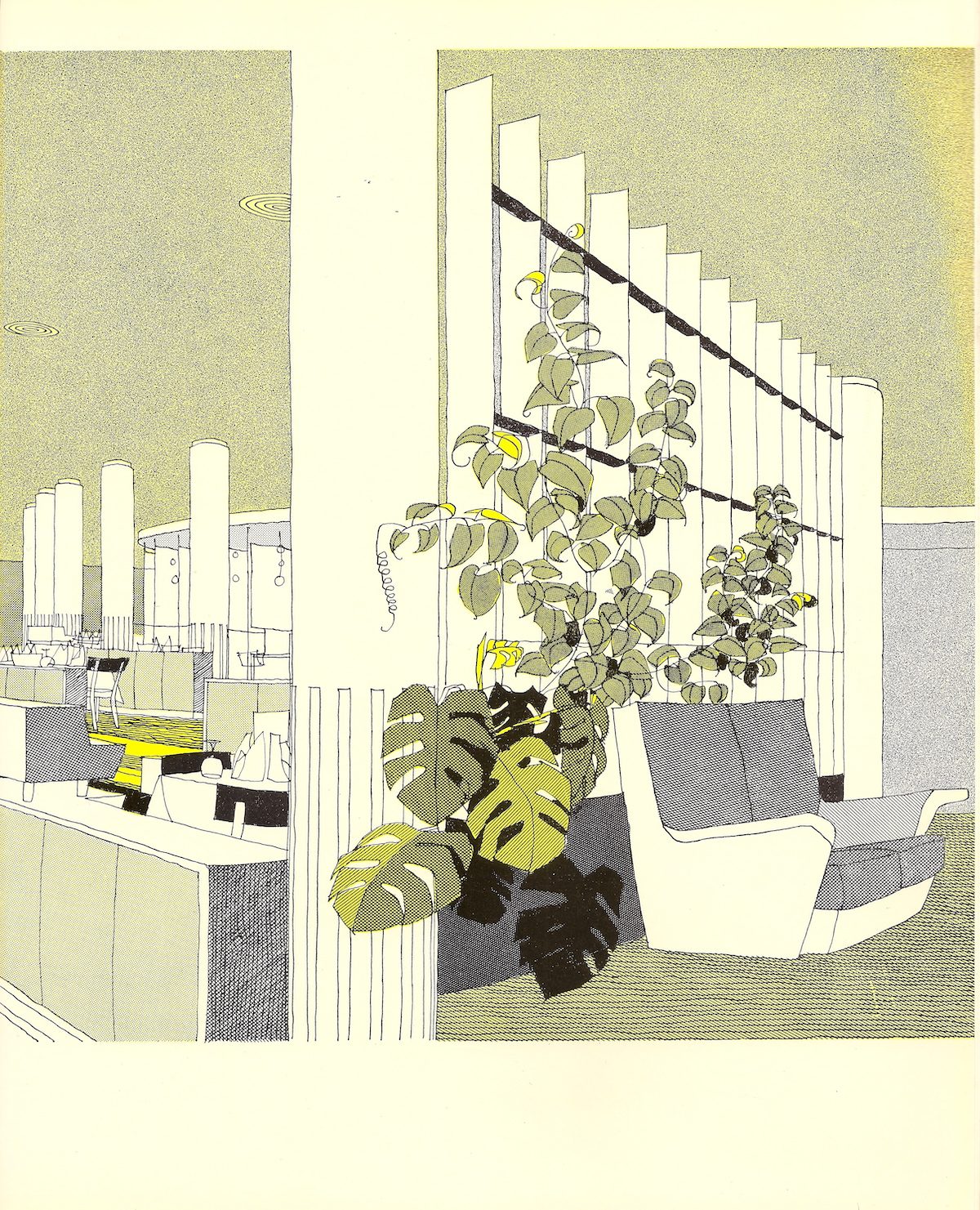 The Restaurant illustrated by Gordon Cullen – from “London Airport, Official Guide, 1956”
One of a series of illustrations from the 1956 official guide to Heathrow drawn by the architectural illustrator Gordon Cullen whose work was very in vogue at the time. It shows a decidedly “Festival of Britain” style – the airport’s chief architect at the time was Frederick Gibbard. 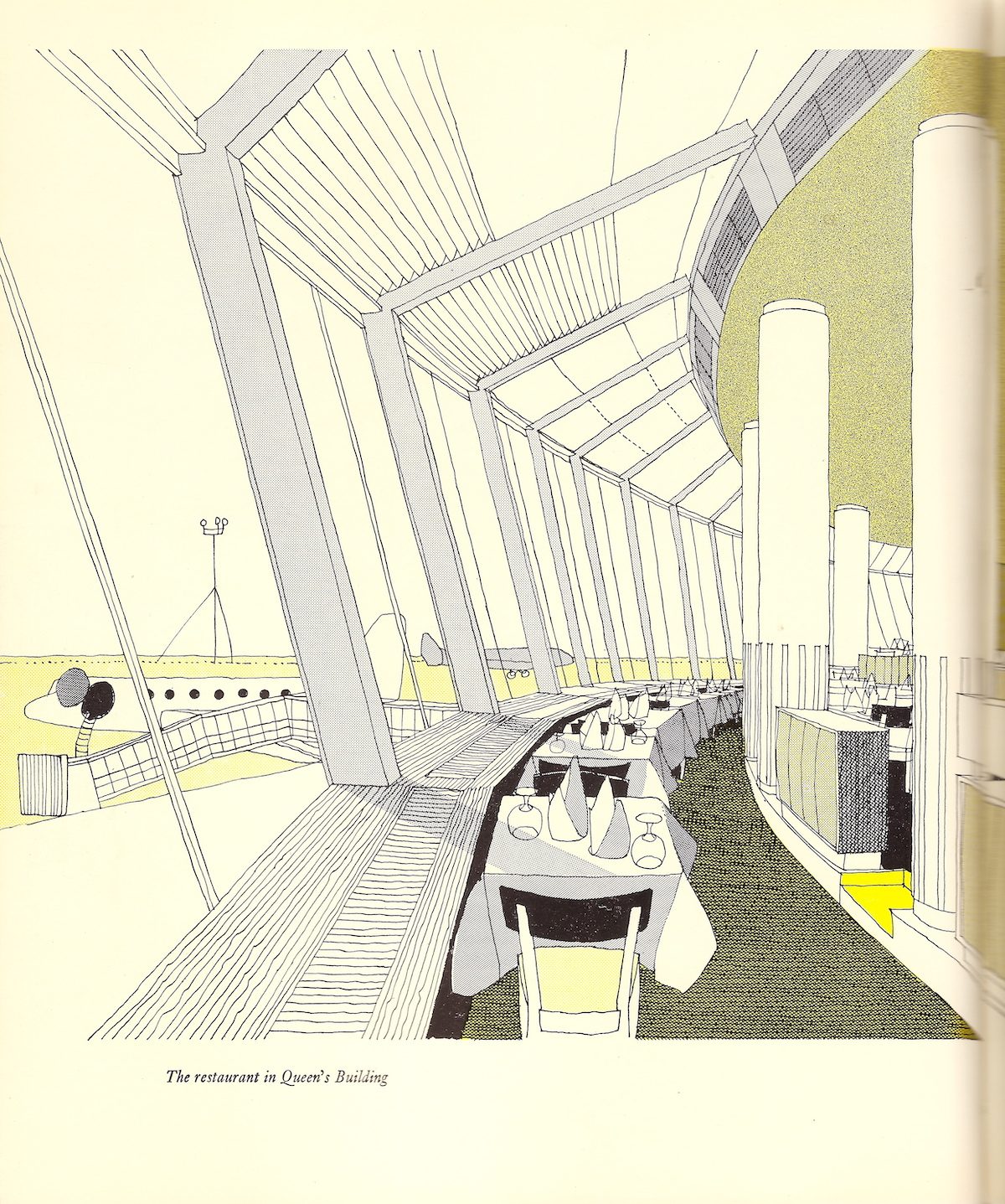 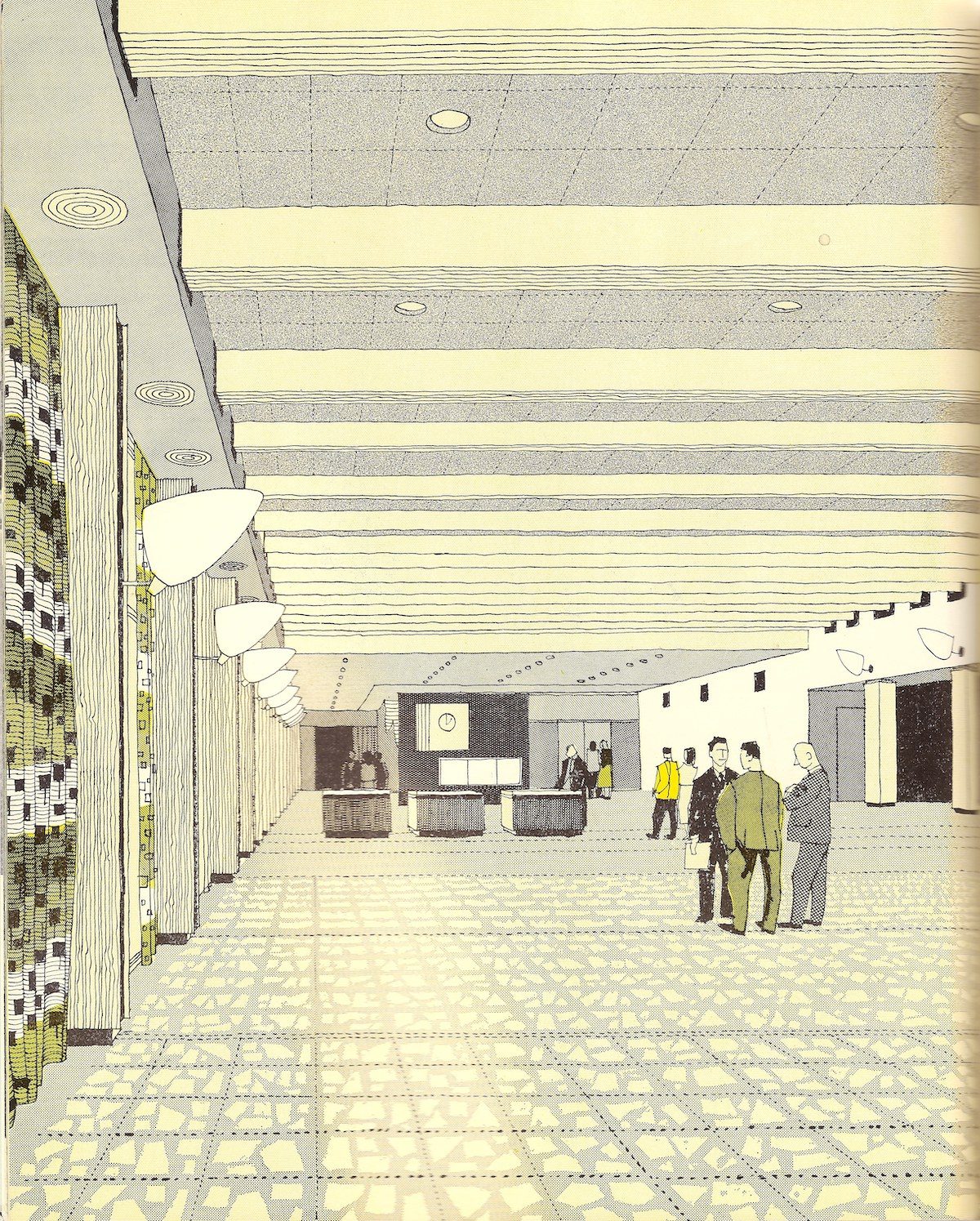 The Exhibition Hall, London Heathrow Airport – illustration by Gordon Cullen – 1956
Cullen produced many architectural drawings and sketches in the post-war period and this is typical of the style of his work. The interiors are very ‘Brave New Elizabethan’ in style, just after the Festival of Britain. 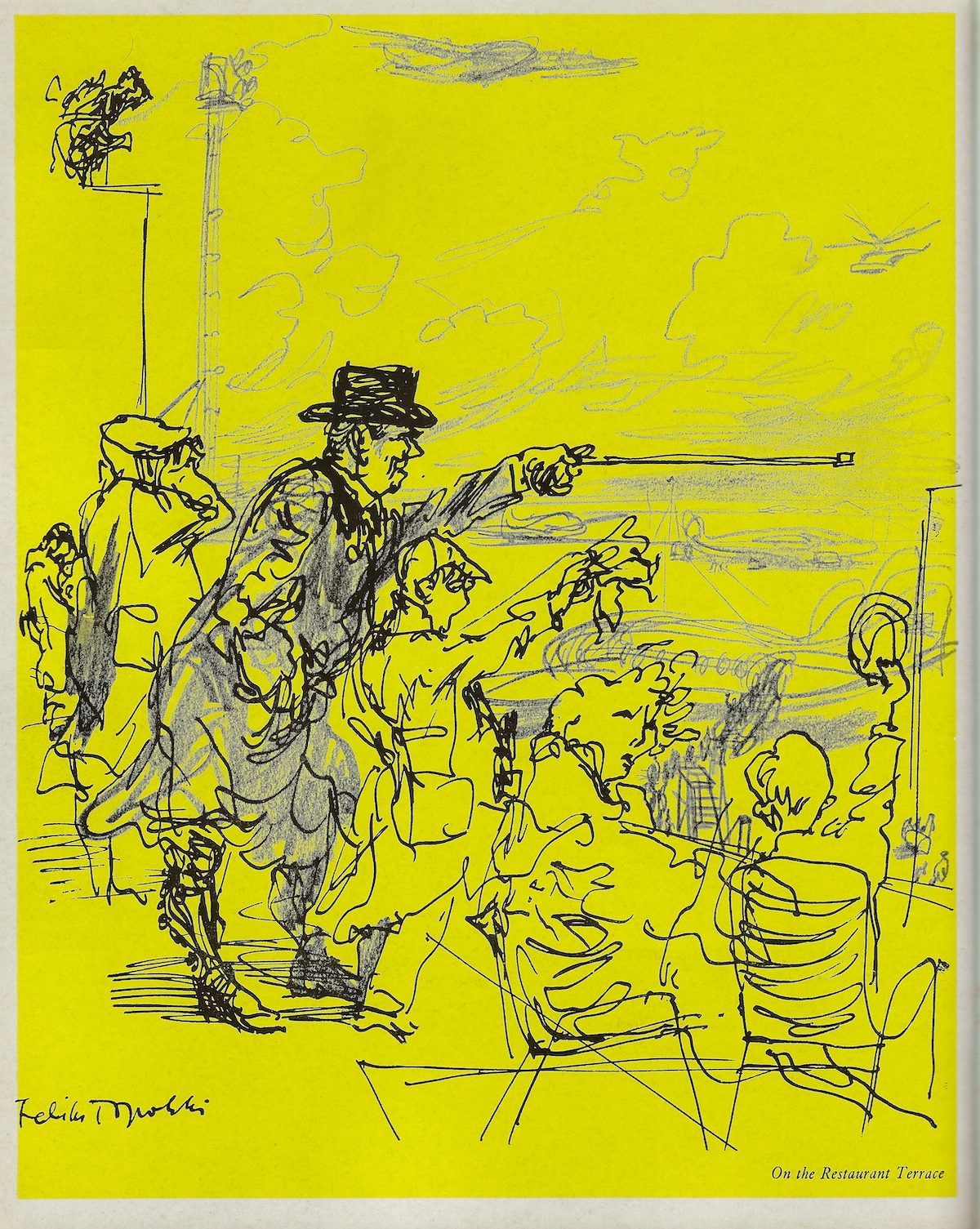 “On the restaurant terrace” – illustration by Felix Topolski from “London Airport, Official Guide, 1956”
Feliks Topolski’s recognisable style seen here describing the terrace at the restaurant at Heathrow Airport in the days when an airport was a destination. It looks a bit like John Bull – pointing out technology to a new Elizabethan? 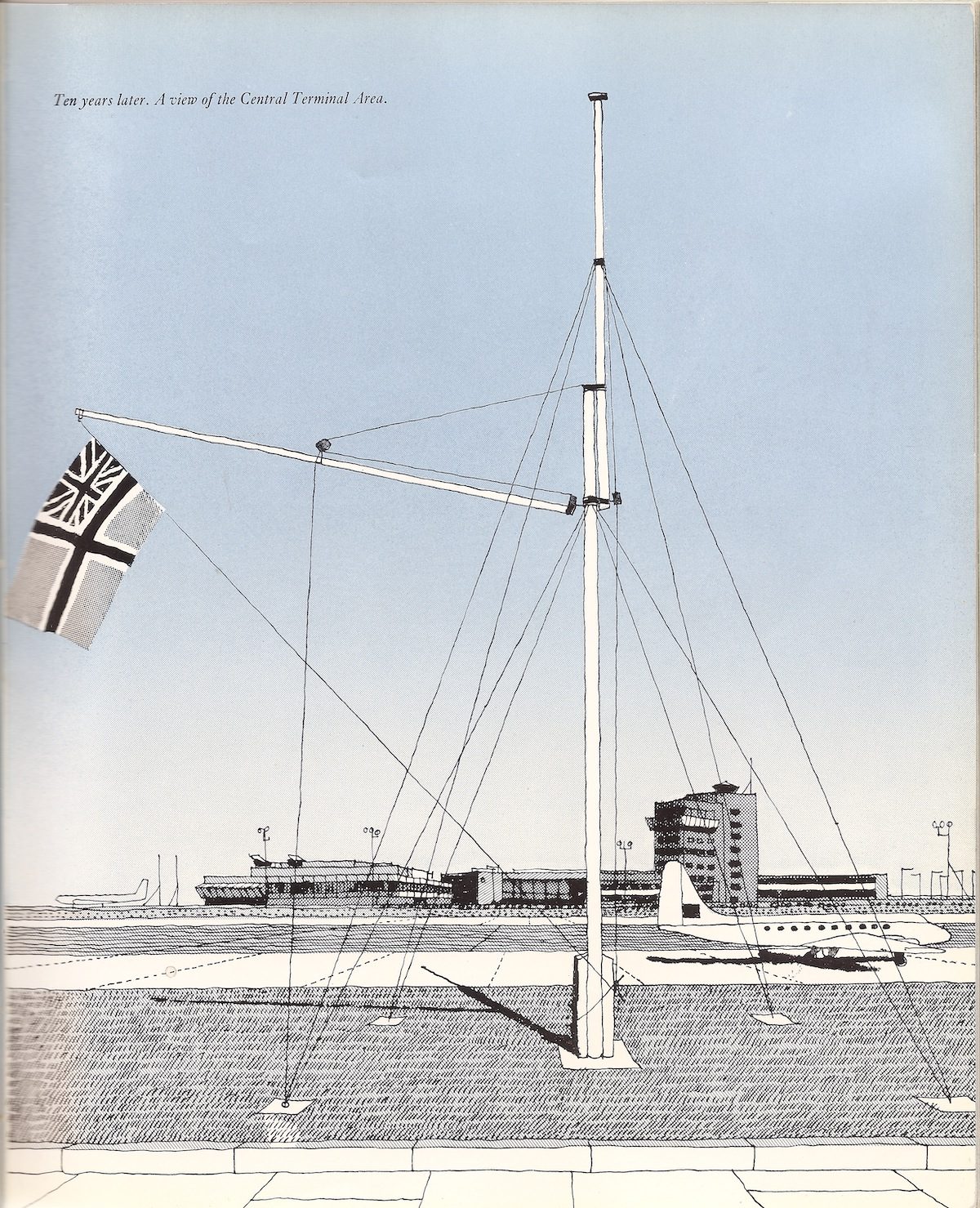 The Central Terminal area at London Heathrow Airport – illustration by Gordon Cullen – 1956
A splendid view of the crisp new terminal buildings, the first ‘permanent’ buildings constructed at London Heathrow Airport as seen by Gordon Cullen in the 1956 official guidebook. Designed by Frederick Gibberd (the architect of Harlow New Town) the buildings were very ‘new Elizabethan’, reflecting the post-Festival of Britain style of architecture and capturing air travel as modern and exciting. It seems a shame that Heathrow was soon to become cramped and that the original buildings lost in muddle.

The commitment to design was total, with new typography and signage. 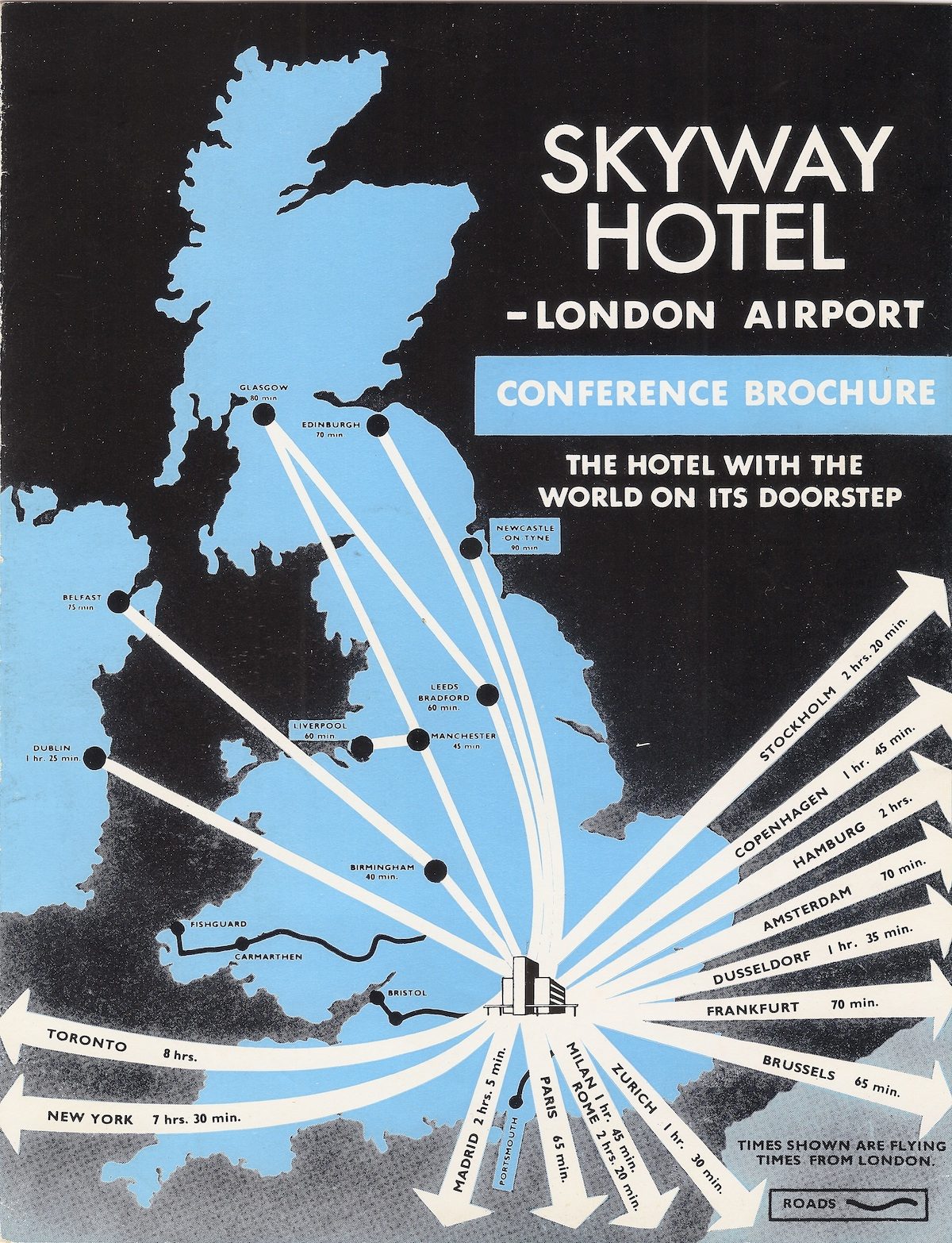 Skyway Hotel, London Heathrow Airport – conference brochure, c1960
The Skyway Hotel graphically demonstrating that they were at the centre of the world. This brochure is very ‘of its age’ – the high-tech, glamour of the airport – the hub of the modern world 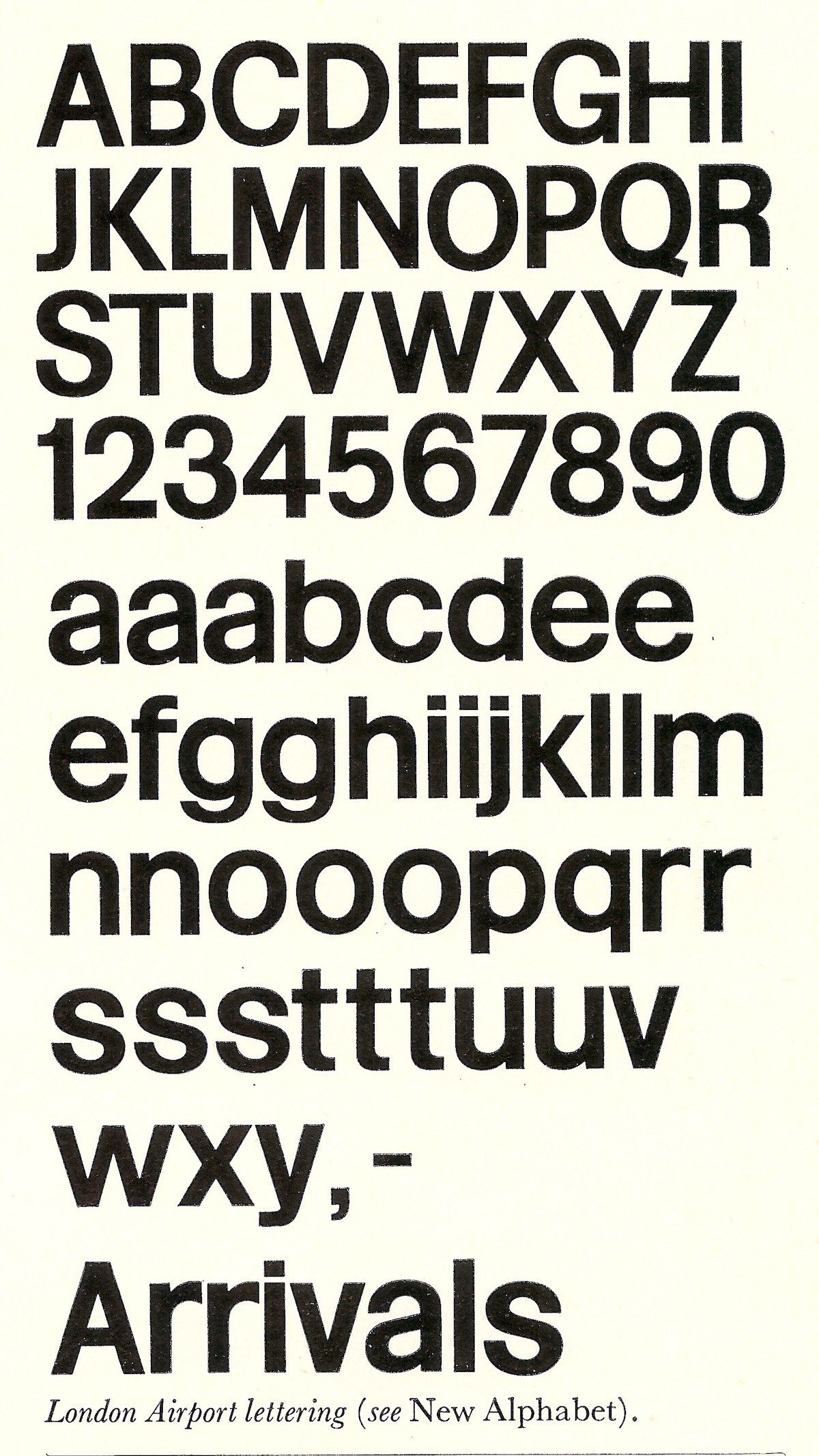 London Airport signs – 1955
A photomontage of signs in use at London Airport – now Heathrow airport – in 1955 when the permanent terminal buildings (now being demolished) were being constructed. It shows a mix of the purpose designed signs used as well as ‘standard’ MOT Pre-Worboys road signs. The complaint was already being made that the actual airport design was being compromised by the use of other styles and typefaces.