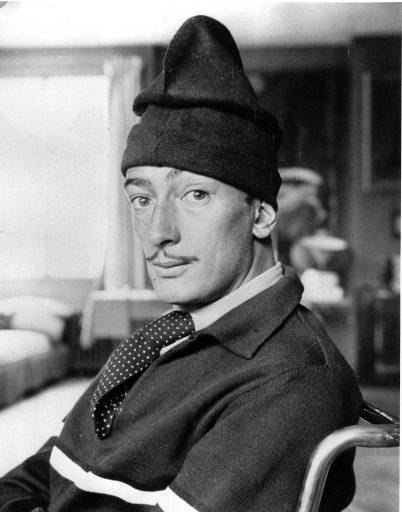 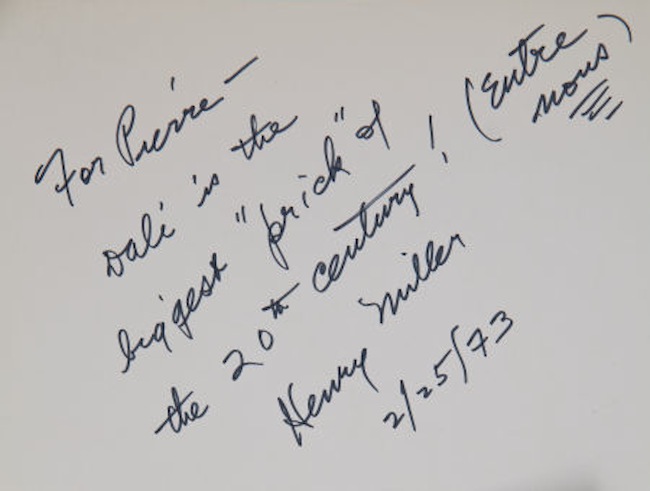 Miller added that Dali was a “prick of the first water”. 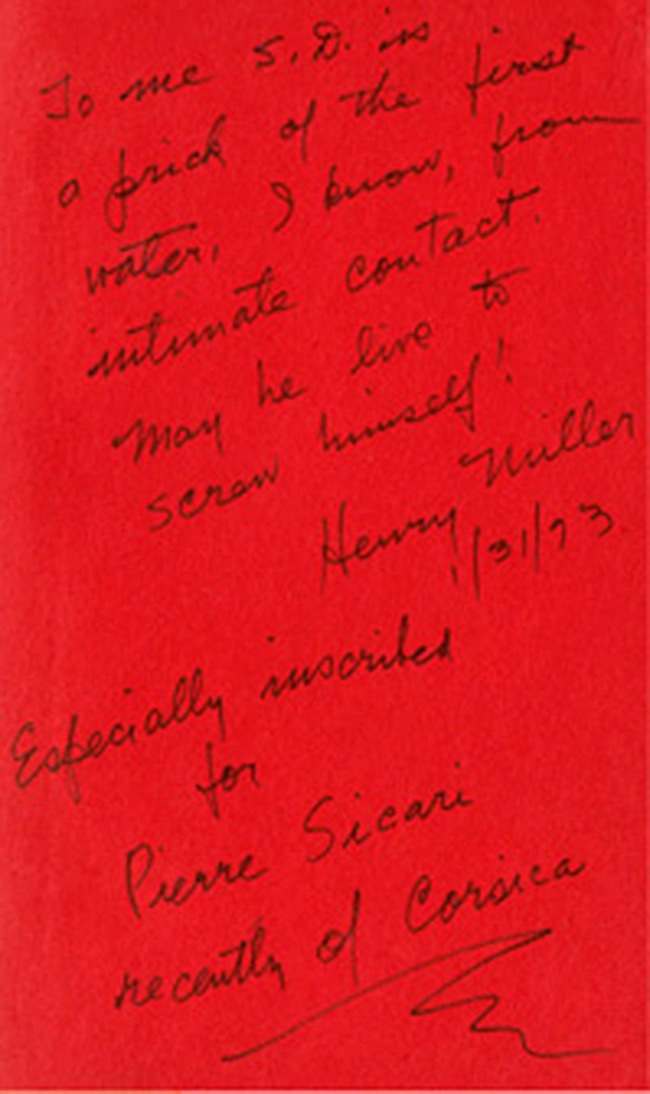 “They hadn’t counted on Mrs. Dali’s talent for organization. Before anyone realized what was happening, the entire household was there for the sole purpose of making the Dalis happy. No one was allowed to set foot in the library because he wanted to work there. – Would [John] Dudley be so kind and drive to Richmond to pick up something or other that Dali needed for painting? Would she [Nin] mind translating an article for him? Was Caresse going to invite LIFE magazine for a visit? In other words, everyone performed the tasks assigned to them. All the while, Mrs. Dali never raised her voice, never tried to seduce or flatter them: it was implicitly assumed that all were there to serve Dali, the great, indisputable artist.”

Amongst a laundry list of things the Dalis did to annoy Miller and Nin was the couple’s incessant public displays of affection, pawing each other at every opportunity; it was a bit much. Dali’s art projects at Hampton Manor proved tiresome; everything had to be subsumed to Dali’s muse, Gala. Caresse Crosby was away in Reno, Nevada at this time and there was no one to serve as referee. Dali’s sympathies for Franco in Spain were further reason for clashes; Miller and Nin were anti-Fascist.

Yes, Crosby invited it and in its April, 1941 issue Life magazine ran story on Dali, Gala, and the hubbub at Hampton Manor.

“Their host, Mrs. Crosby…likes interesting guests,” Life reported, “and does not object when her visitors linger on, but they must be as industrious as they are stimulating.” Life said that Dali arose every morning at 7:30, put on dark trousers, a velvet jacket and a red vest, and “spent his days painting and ‘enchanting’ and his evenings writing” his autobiography.

According to Life, for one of the paintings Dali had black servants pose in ankle-deep snow in front of the mansion with a piano and a slaughtered deer. One of the photographs that accompanied the story depicted Dali, Gala, and Caresse Crosby having their afternoon coffee while a live Hereford bull kneeled on the floor between them.”Here today,” Life continued, “Dali busies himself from dawn to dusk ‘enchanting’ the grounds and gardens with such surrealistic fancies as floating pianos, multi-colored rabbits and spiders with the faces of girls.”

“The Divine Dali,” as he called himself, was not so divine to Miller, who, as many, considered the artist more a poseur-exhibitionist than genius, a talent flawed by his ego-centrism – a pitfall Miller, with no small ego himself managed to escape; his ego was central to his talent, a friend and not an enemy. What was enchanting to Dali  – who once grandly proclaimed, “I am Surrealism!” to the disdain of every other Surrealist in the world – was clap-trap to Miller, the realist who called a prick a prick in his work and knew one when he saw one.   The visit ended in a wild shouting match at dinner. Miller and Nin fled Hampton Manor, and Dali, already holding a place of prominence, zoomed to the top of Miller’s Z-list and became persona non grata.

So. Miller wrote his notes:

On two occasions, Miller expressed his feelings about Dali in books inscribed to Pierre Sicari,  Henry’s barber in Southern California, friend, and confidant, as well as one of the foremost Miller collectors in the world.  On the front endpaper to a copy of Billy Rose’s Dali-illustrrated Wine, Women and Words (1948) Miller wrote, “To me S.D. is a prick of the first water, I know, from intimate contact. May he live to screw himself!  Henry Miller  1/31/73  Especially inscribed for  Pierre Sicari  recently of Corsica.”
On the front free endpaper to a copy of Dali (NY: Abrams, 1968), Miller, a month later, wrote “For Pierre – Dali is the biggest ‘prick’ of the 20th century! (Entre nous) Henry Miller 2/25/73.”