Every week or so in 2016 so far, I have been writing about Star Trek’s 50th Anniversary here at Flashbak.

Today, I want to look back at another Trek collectible from the so-called lost\t decade, the span 1969-1979. This was the era between Trek’s TV cancellation and the first motion picture.

In 1977, Prime Press, a Division of Nostalgia Press, published a Star Trek Postcard Book, a large-sized book featuring 48 full-color post-cards from the original series that were “detachable and ready to use.” The book sold for just $5.95.

These “action and portrait photos from TV’s greatest sci-fi series” were absolutely beautiful, fully-captioned, and each page of six postcards even featured specific themes.

One page, for example was devoted to shots of the U.S.S. Enterprise in space, and these are remarkable today in part because CGI effects have replaced these classic model shots in the actual episodes.  There are shots here from the award-winning episode “The Tholian Web,” for instance.

Another page offers a selection of Trek’s gorgeous matte-paintings, featuring imagery of planets Delta Vega (“Where No Man Has Gone Before,”), Janus VI (“Devil in the Dark”) Starbase 11 (“The Menagerie”), Eminiar VII (“A Taste of Armageddon”) and the Rigel Fortress (“The Menagerie.”)

A third page of six post-cards is devoted to Star Trek’s most memorable aliens, including the Gorn (“Arena,”) the Balok puppet (“The Corbomite Maneuver,”) a Tellarite (“Journey to Babel,”) The Mugato (“A Private Little War,”) the Talosians (“The Cage”) and The Vians (“The Empath”)

This lovely postcard book — almost 40 years old now — features a design by Jane Liean and the photos were selected and the page copy written by TV and film scholar Gary Gerani (author of Fantastic Television). The front and the back of the book feature an episode index of all 79 episodes by Mr. Gerani.

All the photos of the post-card book you see in this post come from my own, slightly aged copy, which I acquired in South Carolina sometime in the late 1970s. Today, it’s on a shelf in my home office. 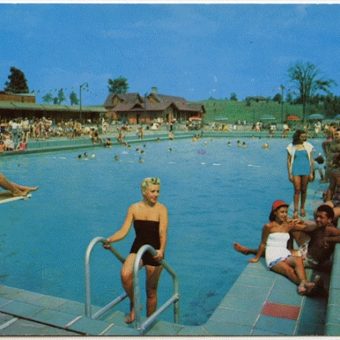 Photographer Updates Postcards Of 1960s Resorts Into Their Abandoned Ruins