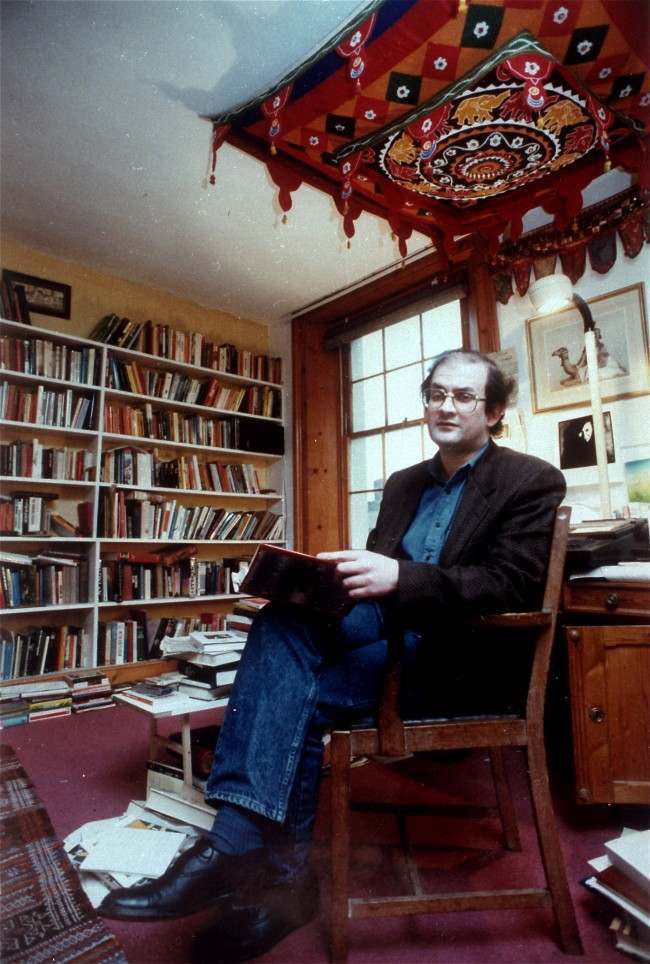 Indian-born writer Salman Rushdie, author of The Satanic Verses, shown in his London study on Jan. 31,1988

ON this day in photos: February 14 1989:  Iran’s leader Ayatollah Khomeini sentences British author Salman Rushdie to death. He also sentenced to death the publishers of Rushdie’s book the Satanic Verses. Khomeni said the book is a blasphemy against Islam. His decree introduced many of us to the word ‘fatwa’.

He stated on Iran’s radio:

“I inform the proud Muslim people of the world that the author of the Satanic Verses book, which is against Islam, the Prophet and the Koran, and all those involved in its publication who are aware of its content are sentenced to death.”

Rushdie, then 42, famous for his ‘Naughty But Nice’ cream cake advert and his Booker Prize winning novel Midnight’s Children responded:

“I am very sad it should have happened. It is not true this book is a blasphemy against Islam. I doubt very much Khomeini or anyone else in Iran has read this book or anything more than selected extracts taken out of context.”

The book had been contentious ever since a group Bradford Muslims occupied themselves one January 1989 afternoon by buying a hardback copy of the Satanic Verses, parading it thought the town and then burning it. Iran’s zealots were tuning in.

Rushdie’s book, published in September 1988, was, in his words, about “migration, metamorphosis, divided selves, love, death” and a satire on Islam, “a serious attempt to write about religion and revelation from the point of view of a secular person”. A secular person witnessing the reaction to his book might have learnt something.

“I had letters delivered to me written in blood. I had telephone calls in the middle of the night, saying not just that they would kill me but would take my daughter and smash her head against a concrete wall.” Mayer still seethes at the callousness of others. “My daughter was nearly expelled from her school. A group of parents said, ‘What would happen if the Iranians sent a hit squad and got the wrong girl?’ And I was thinking: what, you think my daughter is the right girl?”

The strange part,” he told Martin Amis, “is not being able to go out in the evening. Or indeed in the afternoon. Or in the morning. To clear your head.”

A Japanese professor was murdered at his university because he had translated the book. Other died in protests in Pakistan.  Said Rushdie: “You live until you die. That is all you can do.”

One thing noticeable abut these pictures is that we now live in a world where you can be arrested for a tweet. Back then – not so long ago – the UK was a more tolerant place. You could scream for a man to be murdered, for saying things you disagree with, and not be arrested. Such intolerant ravings just made it easier for the sane to pick a side. And the sane were and still are with Rushdie.

“We live in an increasingly intolerant time and one of the things that is worrying is the liberal cravenness in the face of that, almost a willingness to accept censorship as a good thing because all you have to do now is threaten violence and it’s become very easy to blame the target.”

The battle for freedom of expression goes on. 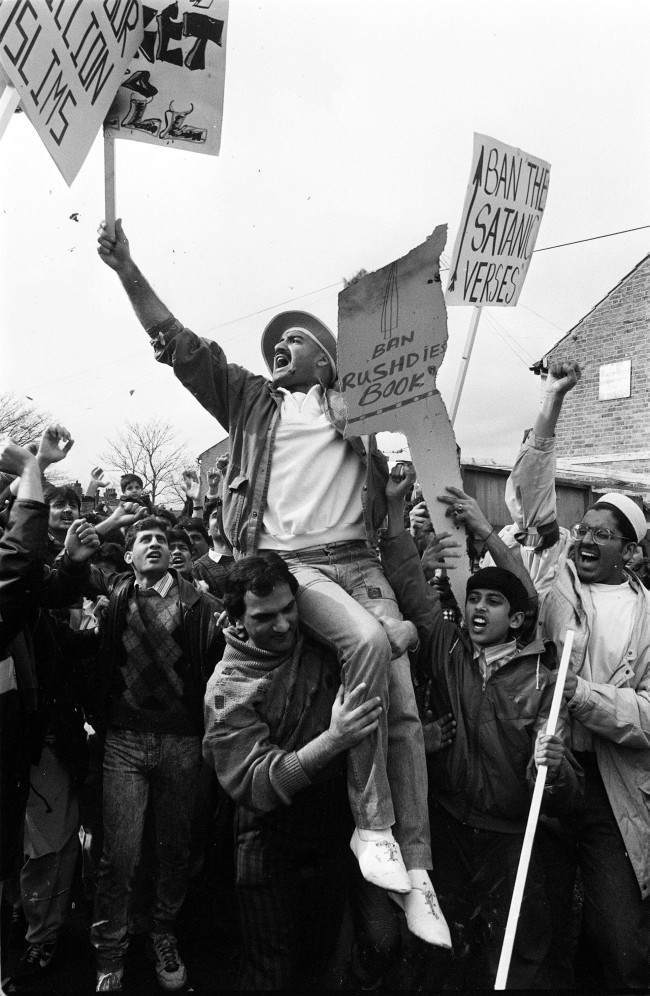 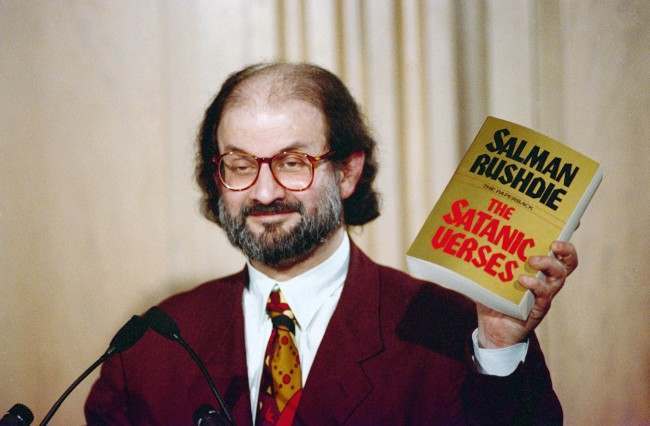 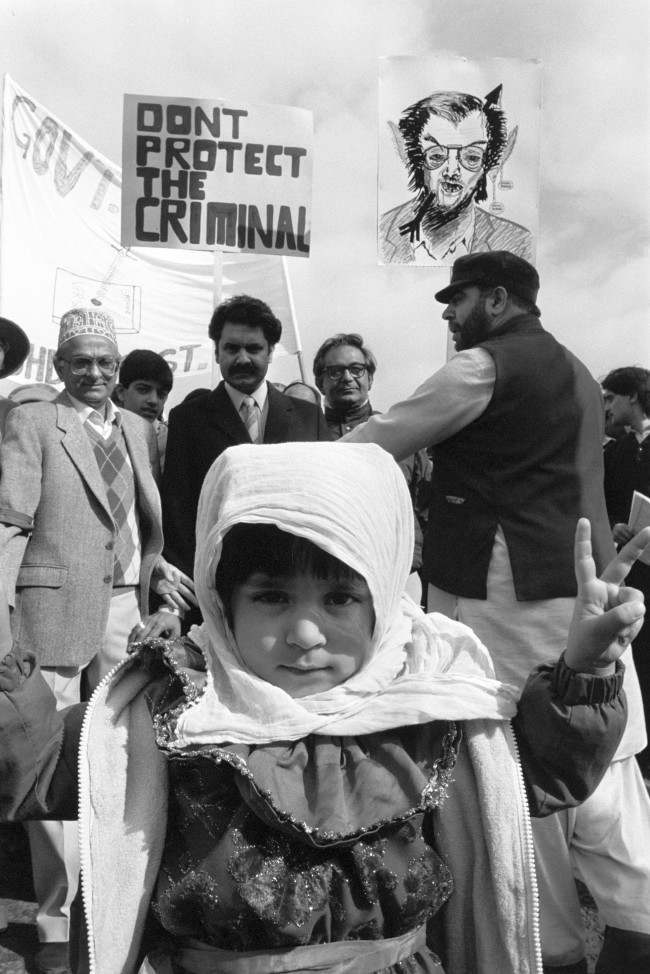 In September 1998, Iranian President Mohammed Khatami said things had changed and Iran does not support the fatwa. 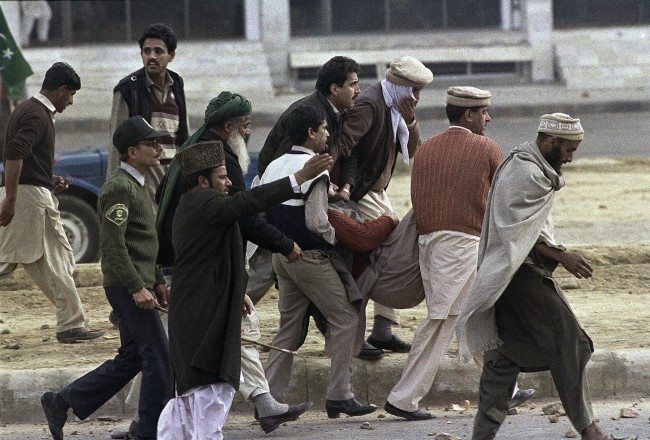 A Protester injured by police is carried away after a protest against the U.S. publication of Salman RushdieÂs book. The Satanic Verses, turned violent, Sunday, Feb. 12, 1989 in Islamabad. A few thousand protesters marched on the American center where police had surrounded the area. At least five people were killed and fifty-five wounded when police used live rounds to try and stop the people attacking the center. 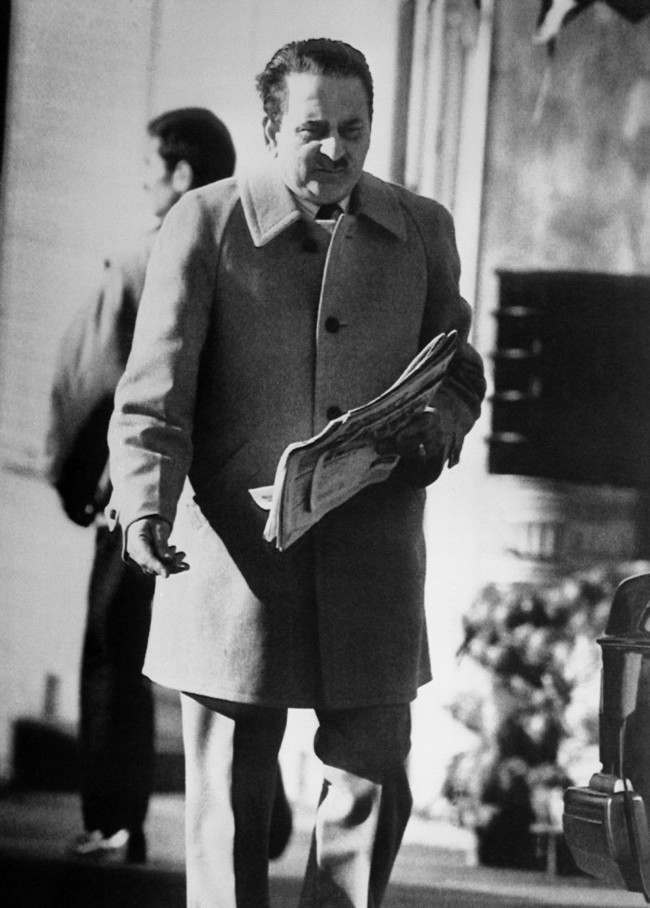 Politics – Satanic Verses Publication Controversy – Sayed Abdul Quddus
Moslem leader Sayed Abdul Quddus, secretary of Bradford’s Council of Mosques, who is reported as saying he and his family would not hesitate to risk their lives in carrying out the death order of Ayatollah Khomeini on The Satanic Verses author Salman Rushdie. Police said they are investigating his comments. Date: 15/02/1989 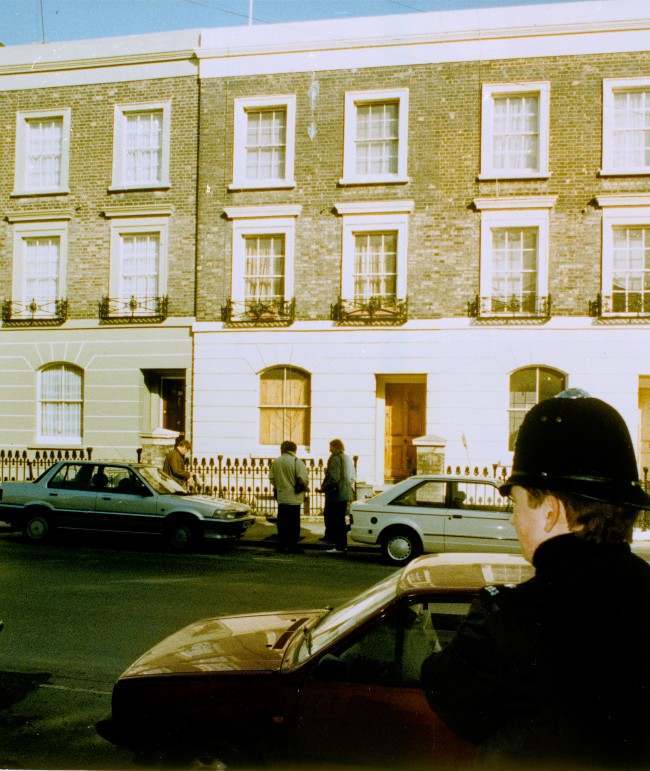 Journalists stand outside the London residence of Salman Rushdie, author of “The Satanic Verses,” as a London policeman, foreground, watches from across the street, Feb. 16, 1989. Rushdie is presently in hiding under armed guard after Iran placed a 2.6 million dollar bounty on his head. Date: 16/02/1989 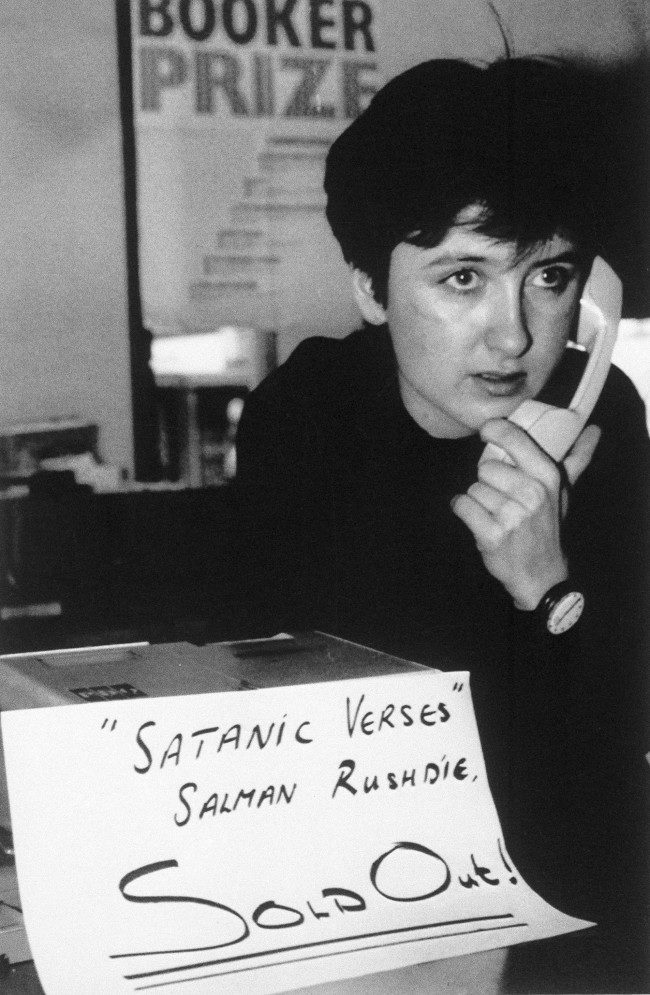 An unidentified shop asistant places a “sold out” notice of Salman Rushdie’s “Satanic Verses” in a London bookshop, Feb. 16, 1989, while on the telephone to the publishers after having sold out all their copies. 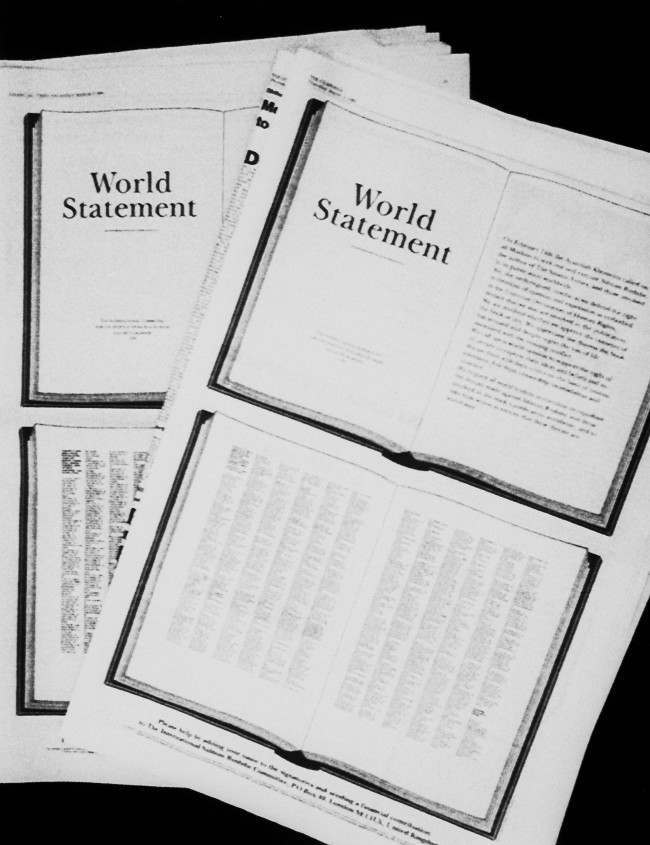 This full page advertisement in the British press, March 2, 1989 carrying a statement backed by thousands of literary figures, world wide, supporting Salman Rushdie and his right to publish the book “The Satanic Verses” which has caused an outcry in the Muslim world. (AP Photo/Peter Kemp) Date: 02/03/1989 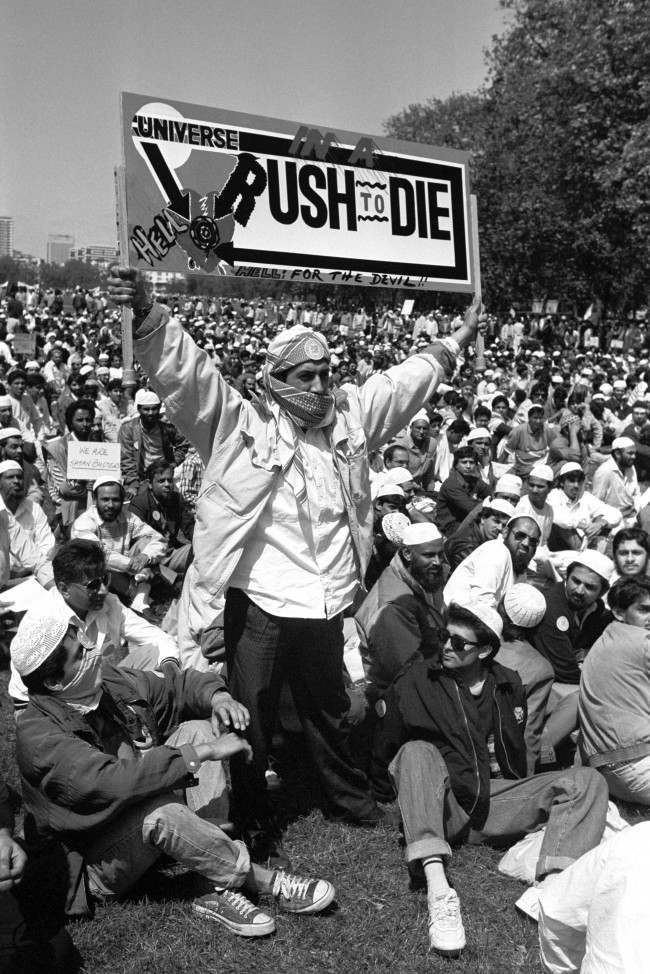 A Muslim holds aloft a dramatic banner in Hyde park, during a protest against Satanic Verses author Salman Rushdie.
Date: 27/05/1989 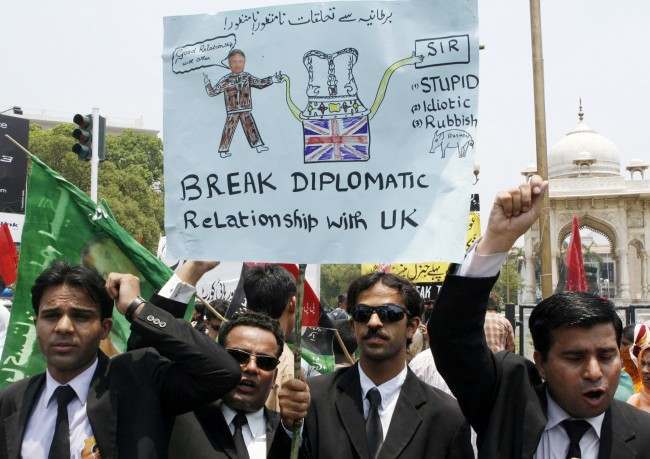 Pakistani lawyers hold a rally to condemn the British government for awarding knighthood to British author Salman Rushdie in Lahore, Pakistan. The decision to award Rushdie a knighthood has sparked a harsh reaction throughout much of the Muslim world.
Date: 21/06/2007 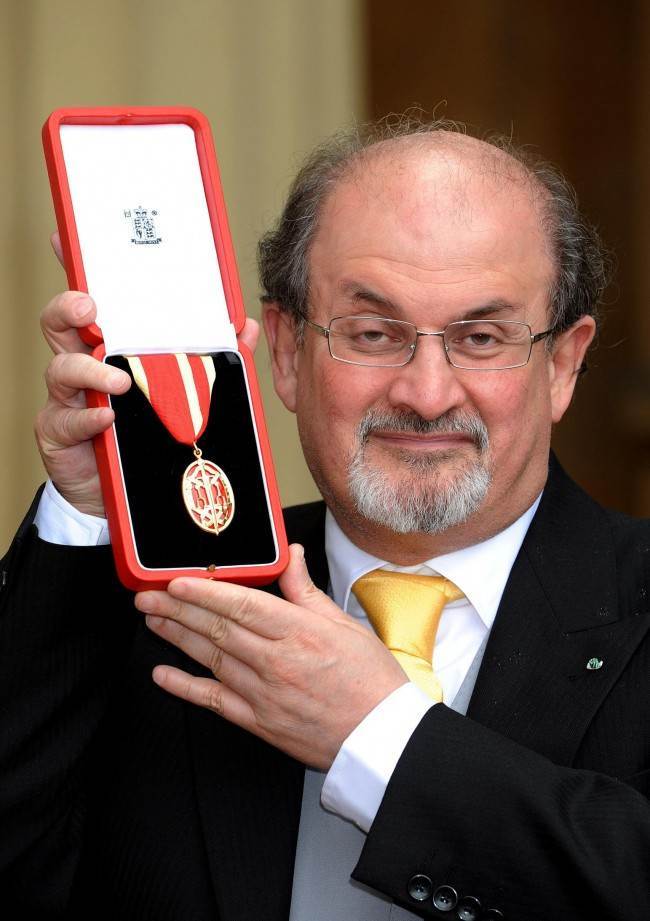