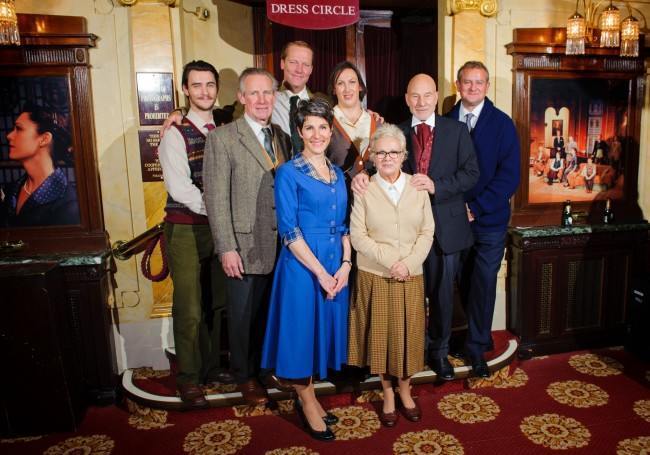 The Mousetrap played at the Ambassadors theatre for 22 years before moving to St Martin’s. 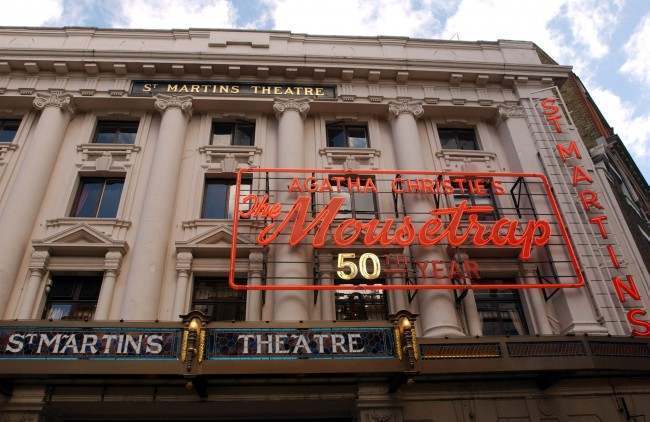 The Mousetrap was first broadcast as a radio play in 1947. It was called Three Blind Mice. The Mousstrap is derived from Hamlet:

The Mouse-trap. Marry, how? Tropically. This play
is the image of a murder done in Vienna: Gonzago is
the duke’s name; his wife, Baptista: you shall see
anon; ’tis a knavish piece of work: but what o’
that? your majesty and we that have free souls, it
touches us not: let the galled jade wince, our
withers are unwrung.

The programme and mousetrap presented to Britain’s Queen Elizabeth II at the 50th anniversary of the world’s longest-running play, The Mousetrap, at St Martin’s Theatre, London. *..Agatha Christie’s famous whodunit, the first stage production to achieve a golden jubilee, opened on November 25, 1952, 10 months after the Queen came to the throne.  Date: 25/11/2002 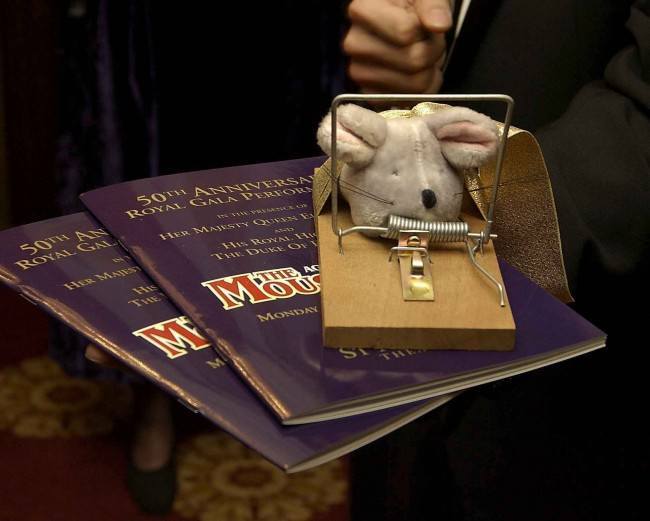 The Mouse Trap first hit the stage at Nottingham’s Theatre Royal on October 2 1952. On November 25, 1952, the curtain went up on the first West End show. 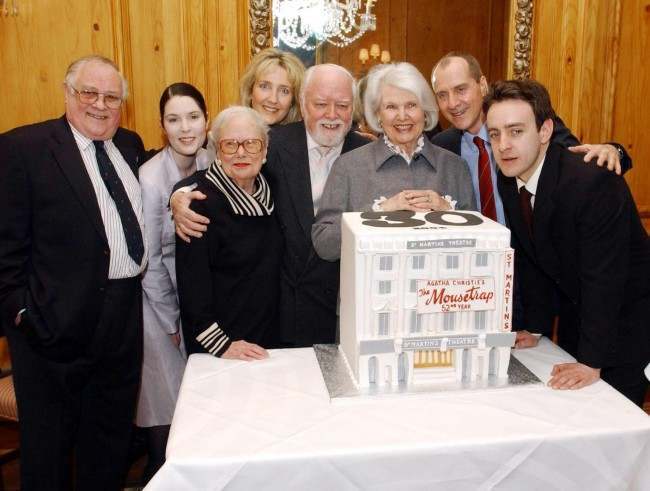 Every performance ends with an actor asking the audience: “Now you have seen The Mousetrap you are our partners in crime, and we ask you to preserve the tradition by keeping the secret of whodunit locked in your hearts.”

It’s that because it’s not all that, ell, good? The Sunday Times dared ask the question:

“Perhaps her greatest strength,” wrote Baroness James of Holland Park in a monograph about crime fiction, “was that she never overstepped the limits of her talent.” Lady James, better known to fans of the genre as P.D. James, was referring to Agatha Christie. No one has more deftly and graciously encapsulated the paradox of Christie’s work: it is highly popular and not very good.

Even when The Mousetrap opened in 1952 it was moss-covered, as Christie clung to the creaking conventions of the Thirties country-house murder mystery to reminds us that even awfully decent types could do the indecent thing. As Mollie Ralston says of her guests: “They all came from very good addresses.”

It is “dry-rot melodramatics”.

But still they come to watch. 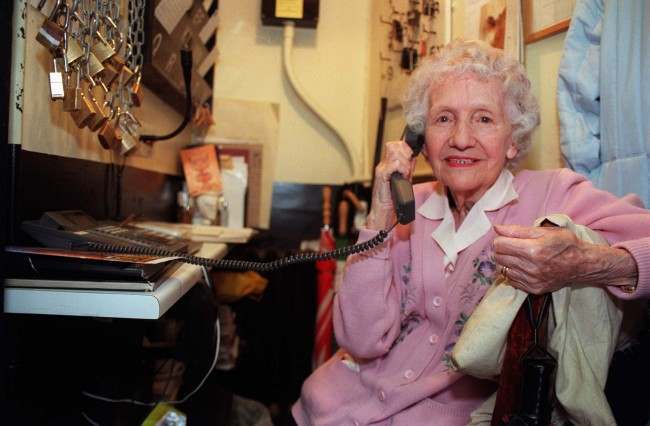 The drama became the longest-running show in British theatre history as early as April 1958 (plays back then didn’t run for as long as they do now). From that point on, says producer Stephen Waley-Cohen, “it began to develop its own momentum”. They liken it to Madame Tussauds and the Changing of the Guard – something you have to catch if you visit London. But the audience is not, as conventional wisdom suggests, made up mainly of foreign tourists. The majority are from other parts of the UK; for them, The Mousetrap is part of the London experience. It’s like some quasi-religious ritual, with the audience as much a part of proceedings as the cast.

The funeral of celebrated crime writer Dame Agatha Christie at Cholsey Parish Church, near Wallingford. Attending the funeral are the writers husband, archaeologist Sir Max Mallowan (front right) and her grandson Matthew Prichard (holding book), who she gave the rights to The Mousetrap, when he was eight. Date: 16/01/1976 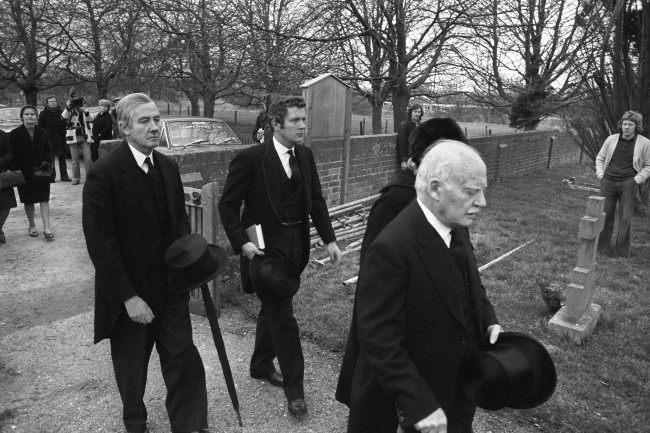 NOVELIST AGATHA CHRISTIE WITH IMPRESARIO PETER SAUNDERS AT THE SAVOY HOTEL, LONDON FOR THE 21ST ANNIVERSARY BIRTHDAY CELEBRATIONS FOR HER LONG RUNNING PLAY THE MOUSETRAP. 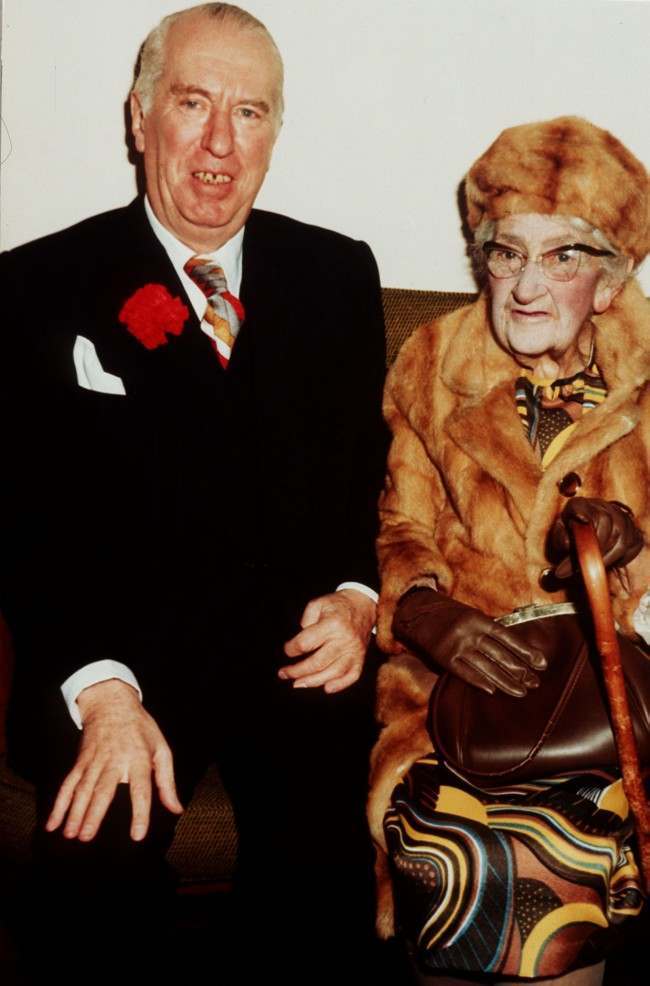 Richard Attenborough, who starred in the original production of The Mousetrap, helps celebrate its 21st anniversary at the Savoy Hotel. He is surrounded by some of the actresses who have played the role of Mollie Ralston, including his wife Sheila Sim (behind him, in beige). Date: 25/11/1973 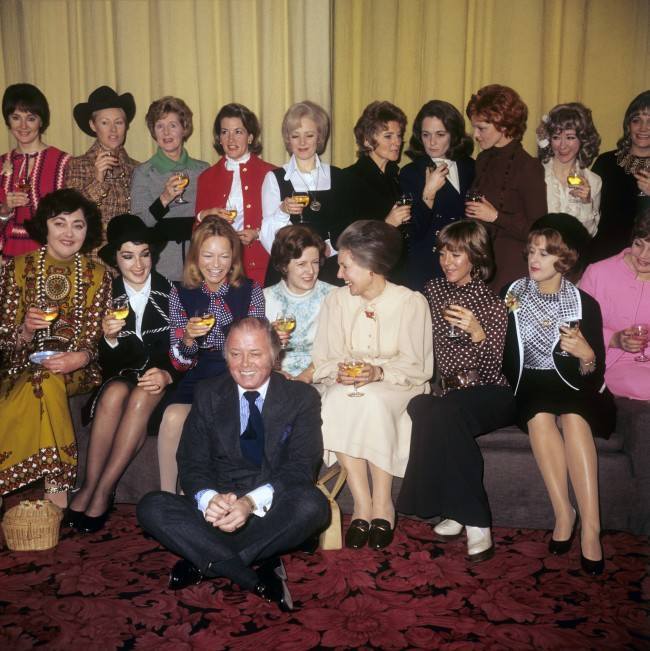 NOVELIST AGATHA CHRISTIE AND HER HUSBAND (RIGHT) ARRIVING AT THE SAVOY HOTEL, LONDON FOR THE 21ST ANNIVERSARY BIRTHDAY CELEBRATIONS FOR HER LONG RUNNING PLAY THE MOUSETRAP. 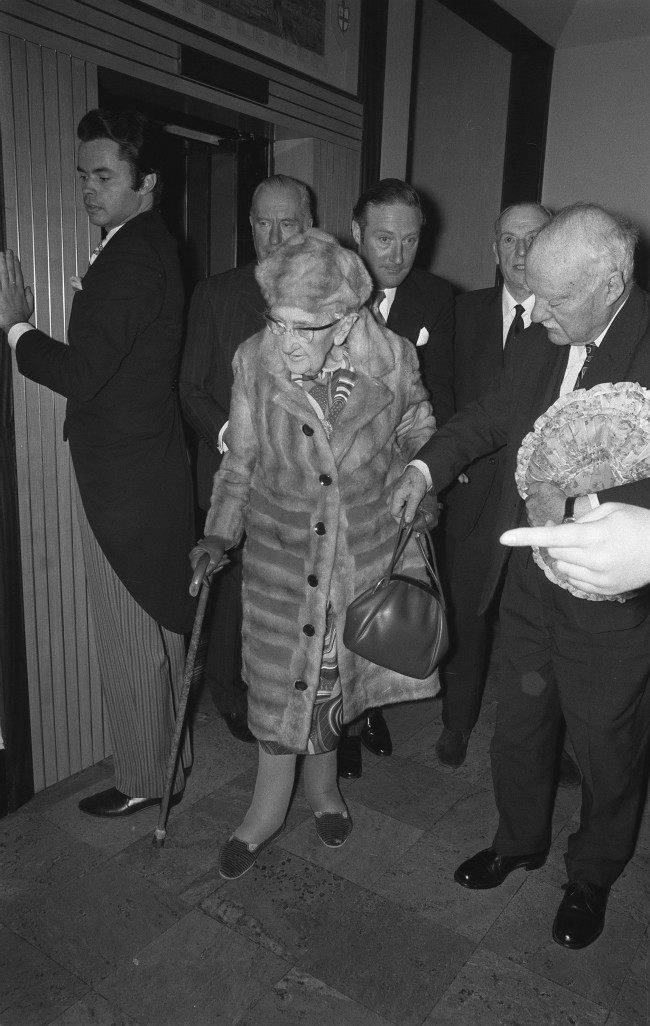 Agatha Christie, author of the record breaking play The Mousetrap, uses a sword to cut a birthday cake weighing half a ton at a party a the Savoy Hotel to celebrate the tenth anniversary of the run of her play. Helping her is Peter Saunders, who presents the play. The cake had a giant marzipan mouse trap on it, and 10 candles. The party, given by Agatha Christie and Mr Saunders, was attended by 1,000 guests, including most of the top stars in the entertainment world and many actors and actresses who have appeared in the play. Date: 25/11/1962 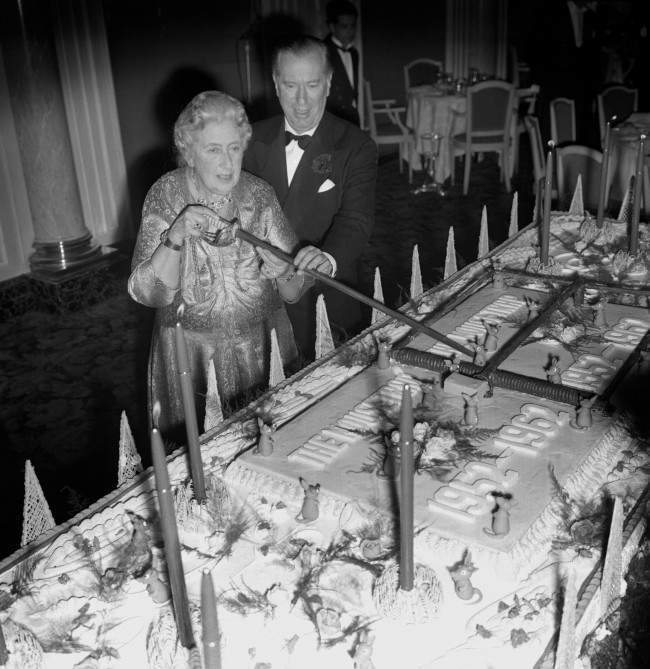 Agatha Christie with Heather Standard, left, and Margaret Lockwood at a London Party on Nov. 26, 1955, to mark the Beginning of the fourth year of the London run of her thriller The Mousetrap, at the Ambassadors Theatre, and the first anniversary of her other play Spider’s Web, at the Savoy Theatre. Miss Lockwood is in ‘Spider’s Web’. The target behind marks such all-time record breakers as Blithe Spirit and Chu Cin Chow.  Date: 26/11/1955 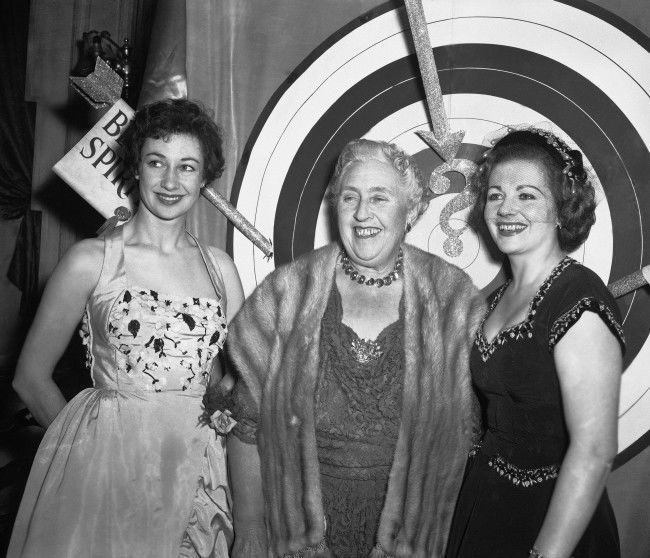 Actress Julie Lockwood, right, and her mother actress Margaret Lockwood, center, as thriller writer Agatha Christie has her attention diverted elsewhere, during a party at LondonÂs Savoy Hotel on Nov. 24, 1962. The party was to celebrate the start of the eleventh year of consecutive showing of Agatha ChristieÂs play ÂThe MousetrapÂ at the Ambassadors Theatre. Date: 24/11/1962 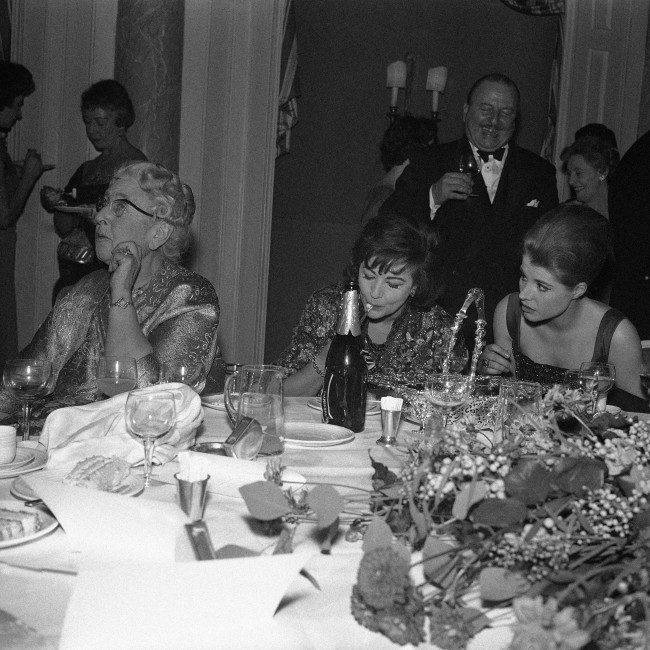 Actor Richard Attenborough gives his wife earnings as a first night present ahead of The Mousetrap opening at The Ambassadors Theatre, London. Date: 25/11/1952 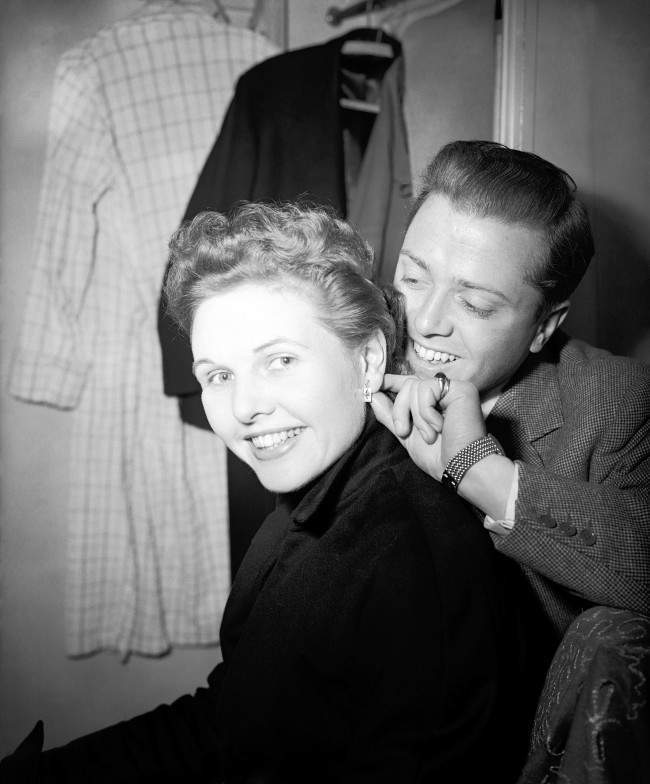 Richard Attenborough and Sheila Sim perform in the original production of Agatha Christie’s The Mousetrap. 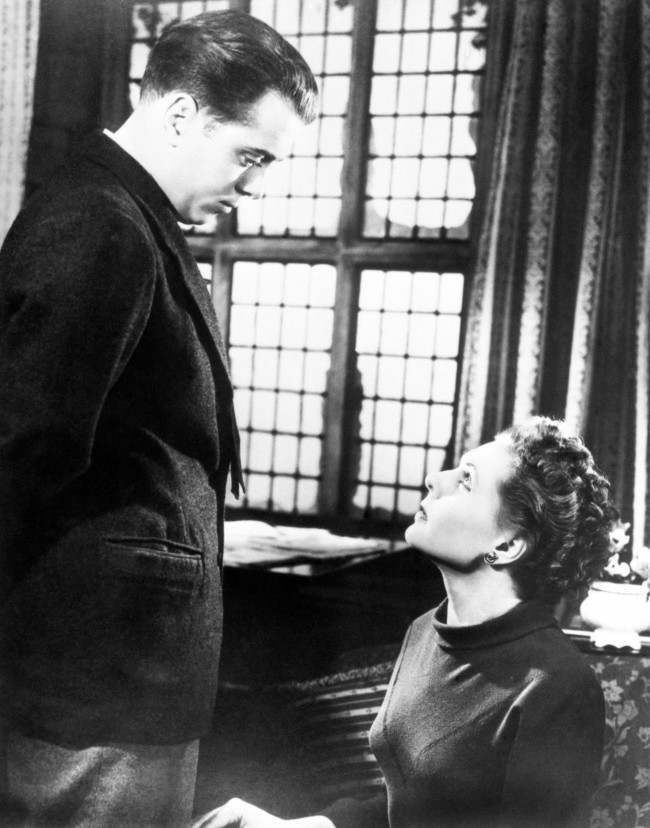