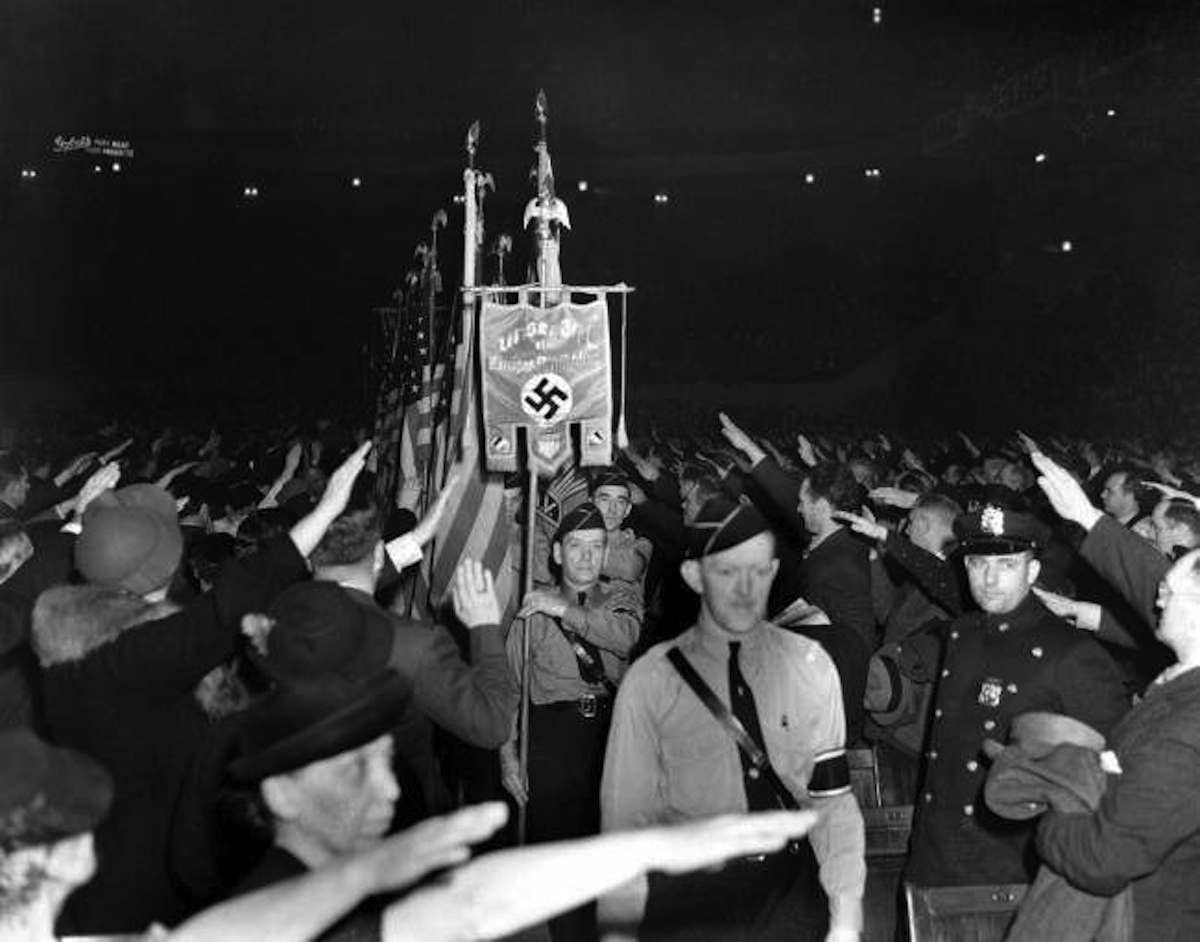 The crowd responds with a Hitler salute as uniformed members of a German-American Bund color guard march at a gathering in New York’s Madison Square Garden, Feb. 20, 1939.

In 1939, the German American Bund organized a rally of 20,000 Nazi supporters at Madison Square Garden in New York City. Marshall Curry has compiled footage of the event into the short film A Night at the Garden. You can see it at the end of this story.

“The first thing that struck me was that an event like this could happen in the heart of New York City,” Curry tells The Atlantic. “Watching it felt like an episode of The Twilight Zone where history has taken a different path. But it wasn’t science fiction – it was real, historical footage. It all felt eerily familiar, given today’s political situation.” 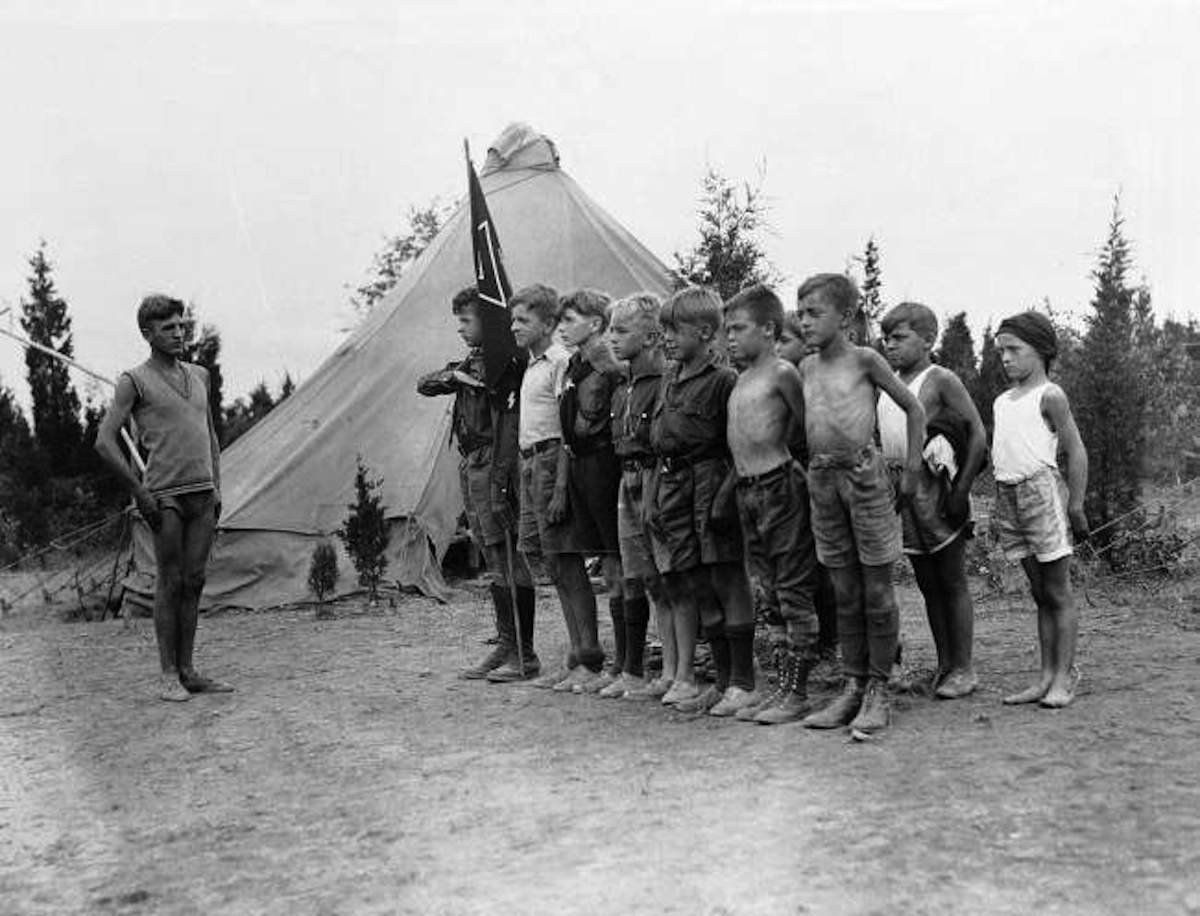 Hans Schult, left, a leader at Camp Wille und Macht near Griggston, New Jersey, puts a group of German boys between the ages of 8 and 16 through a drill before a meal. The camp, flying the Nazi flag, is sponsored by Friends of the New Germany, and contains 200 boys from New York, Brooklyn, Buffalo, and Philadelphia.
Date: 09/08/1934 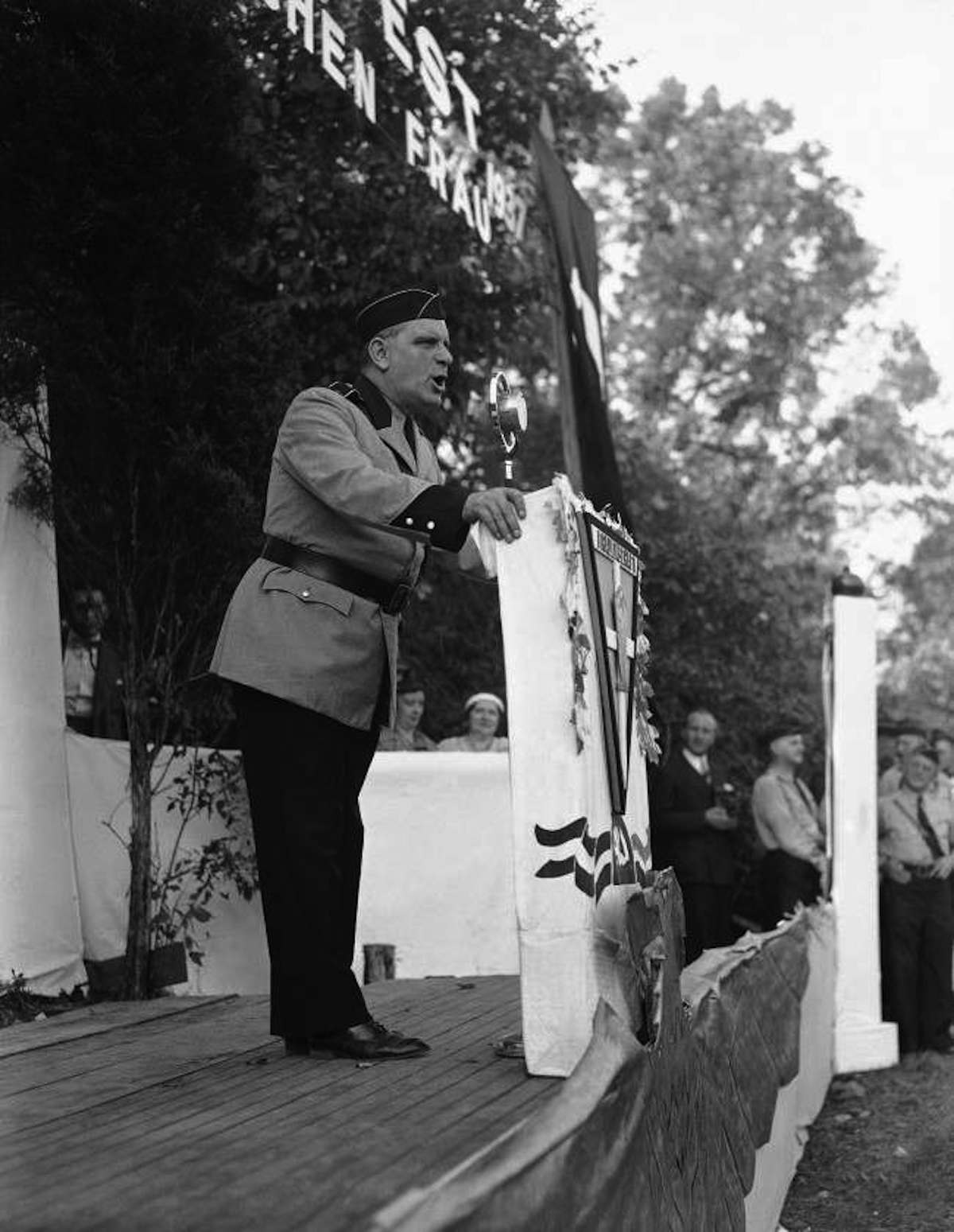 Answering charges that the German-American Volksbund is engaged in un-American activity, Fritz Kuhn, above, told thousands gathered camp Nordland, Andover, New Jersey on Sept. 26, 1937, the groups’ activities are founded on patriotic lines. He said the bund will continue its fight for Americanism until America is not controlled by Americans and by a bunch of Russian-controlled Jews. American flags outnumbered swastikas, but there was goose stepping and Nazi saluting 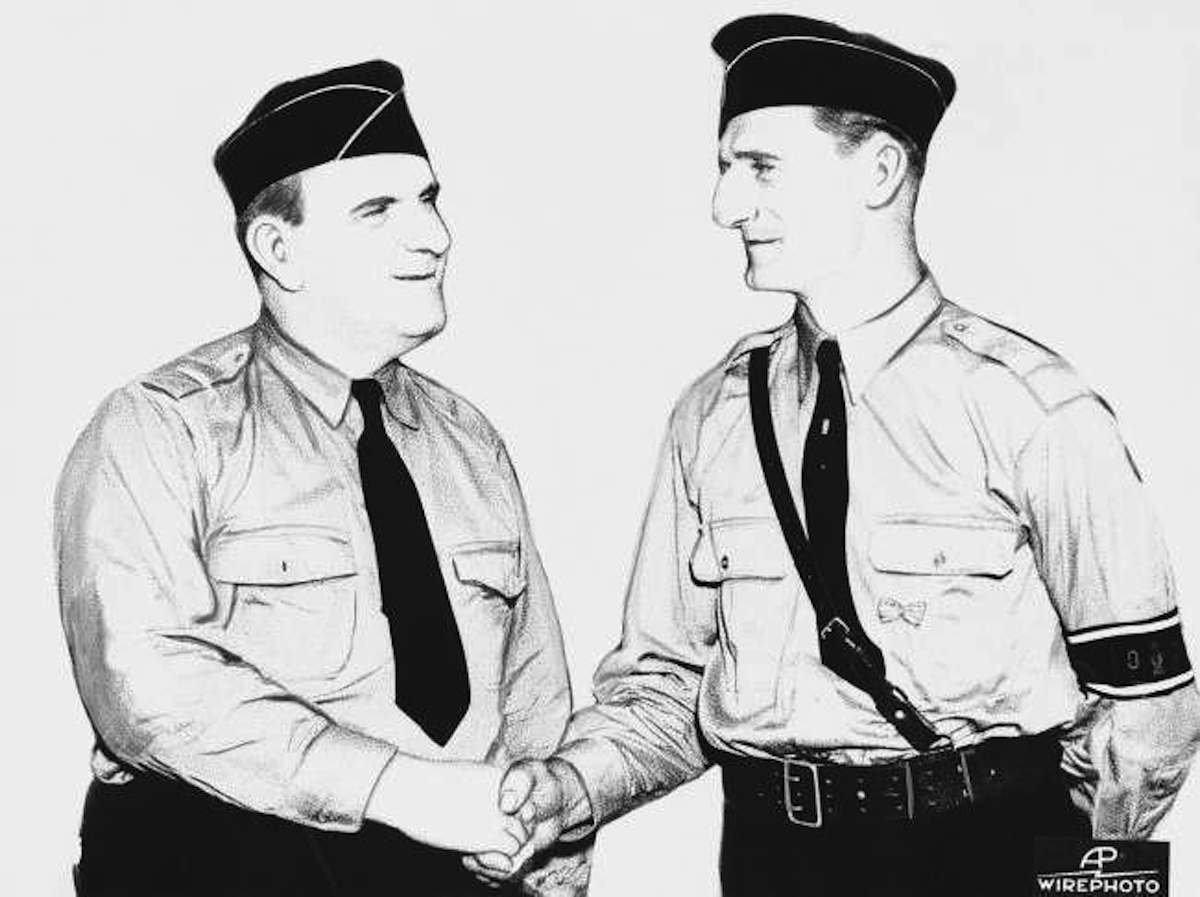 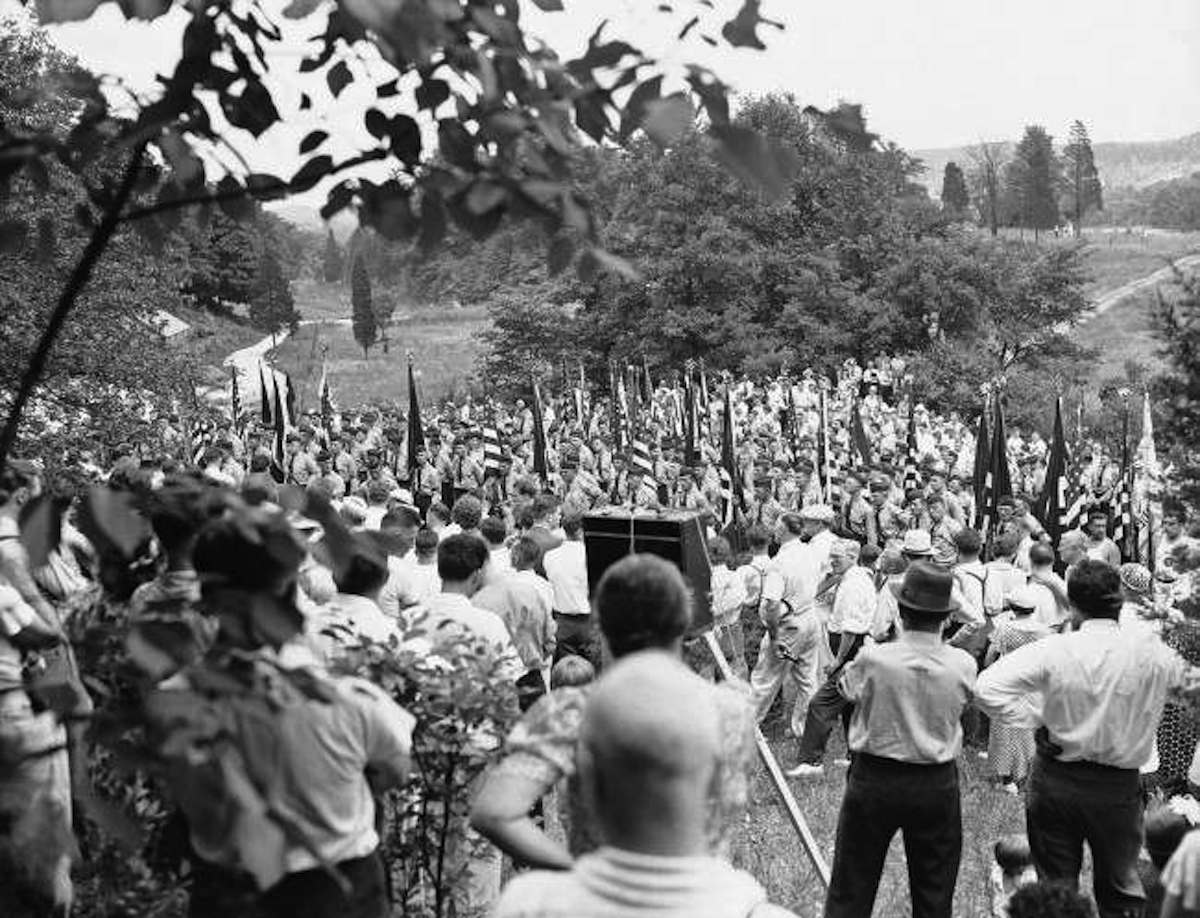 Here is part of the crowd of 6,000 Nazi sympathizers that gathered in the Sussex hills, Andover, New Jersey on July 19, 1937, to witness the dedication of the 21st camp in the United States under the auspices of the German-American Volksbund. A thousand men uniformed and wearing swastika armbands paraded behind the Nazi flag.

“The footage is so powerful,” says Curry, “it seems amazing that it isn’t a stock part of every high school history class. This story was likely nudged out of the canon, in part because it’s scary and embarrassing. It tells a story about our country that we’d prefer to forget.” – Marshall Curry 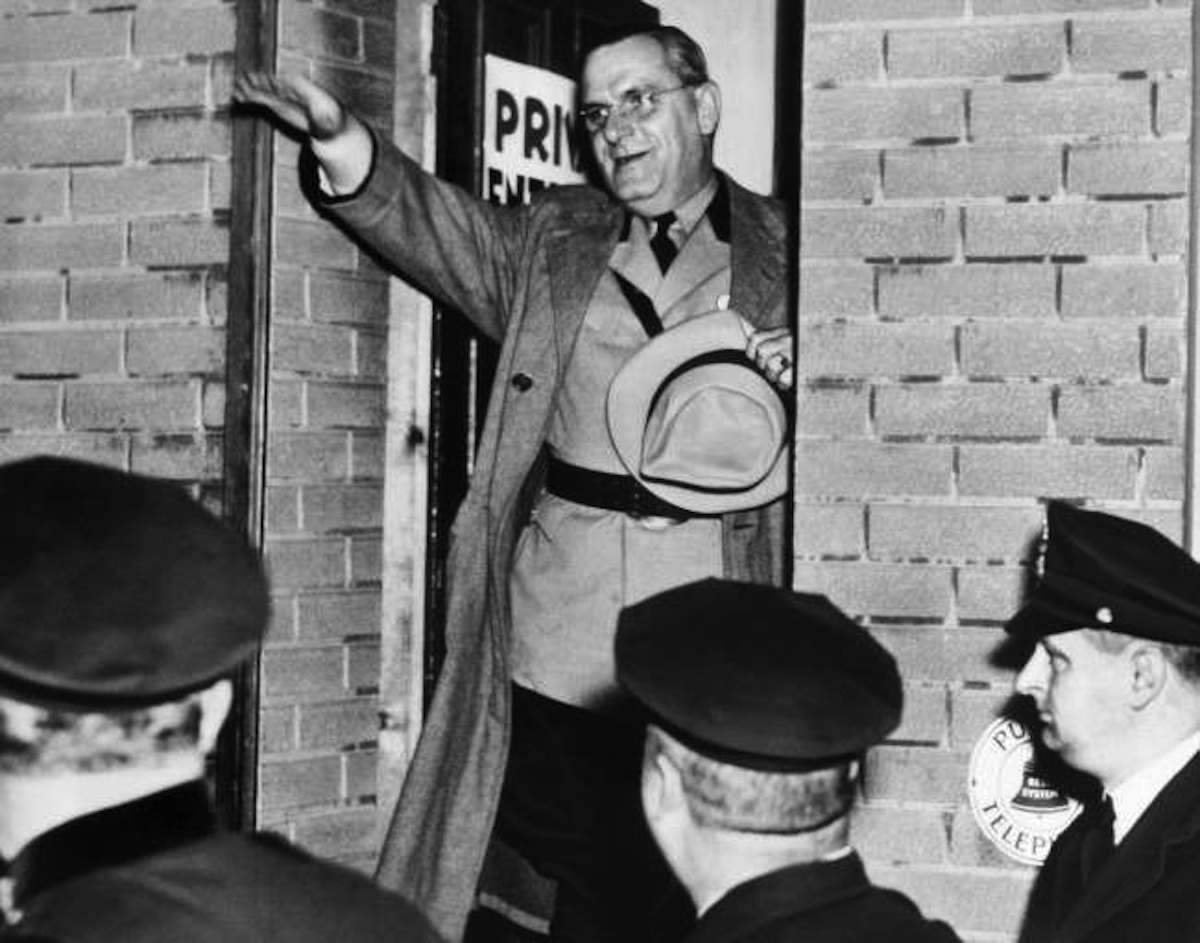 Fritz Kuhn, leader of the German-American Bund, stands in the doorway of a German auditorium at (38th St. and Palisades Ave.) Union City, New Jersey on Oct. 2, 1938 and gives the Nazi salute to his followers. A few minutes later, Kuhn emerged from this same door after a New Jersey crowd, mostly veterans, broke up his victory meeting, and stoned the leader. 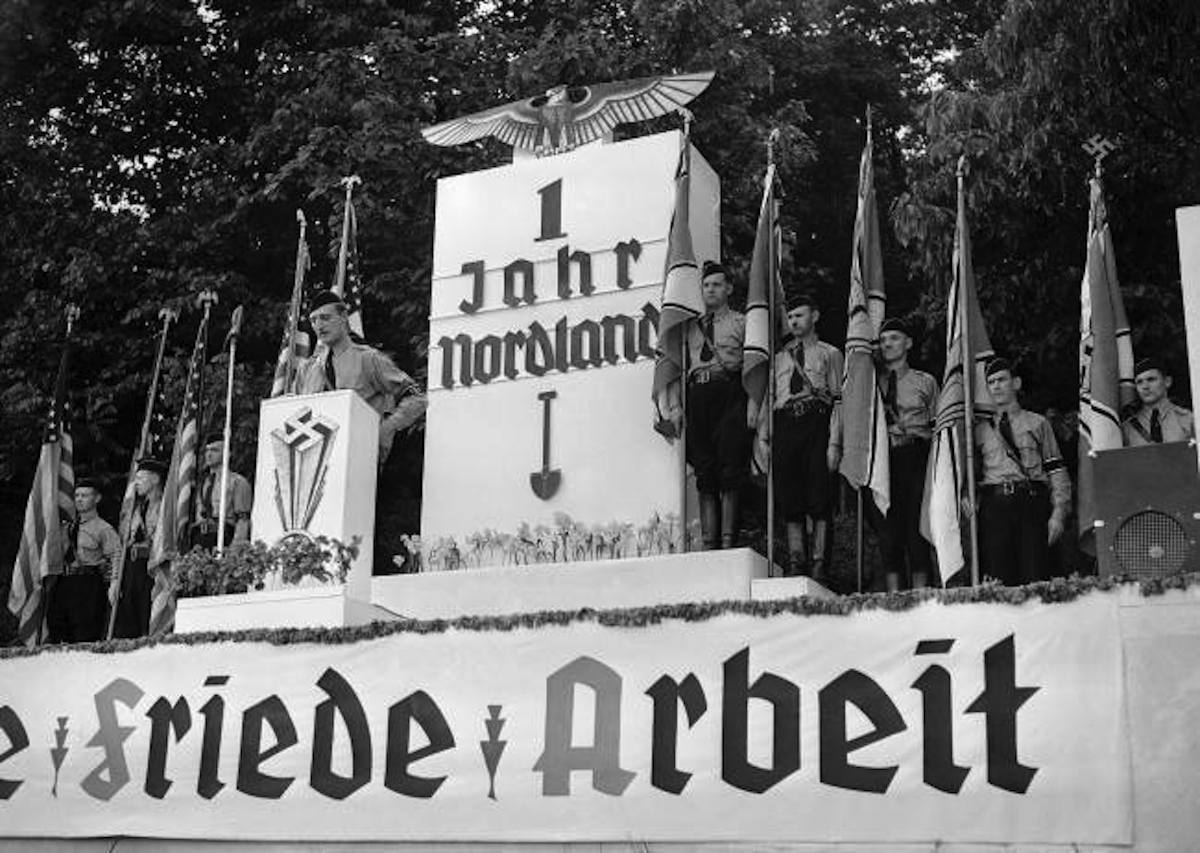 German American Bund has first meeting of year at camp in Nordland. Fritz Kuhn U.S. leader of the organization speaking from platform during the meeting. in Norland, N.J., on June 6, 1938.

“In a part of Fritz Kuhn’s speech that isn’t in the film, he applauds Father Coughlin whose radio shows praising Hitler and Mussolini reached audiences of 30 million. Henry Ford and Charles Lindberg expressed anti-Semitic beliefs. And press magnate William Randolph Hearst declared, “Whenever you hear a prominent American called a fascist, you can usually make up your mind that the man is simply a loyal citizen who stands for Americanism.” – Marshall Curry 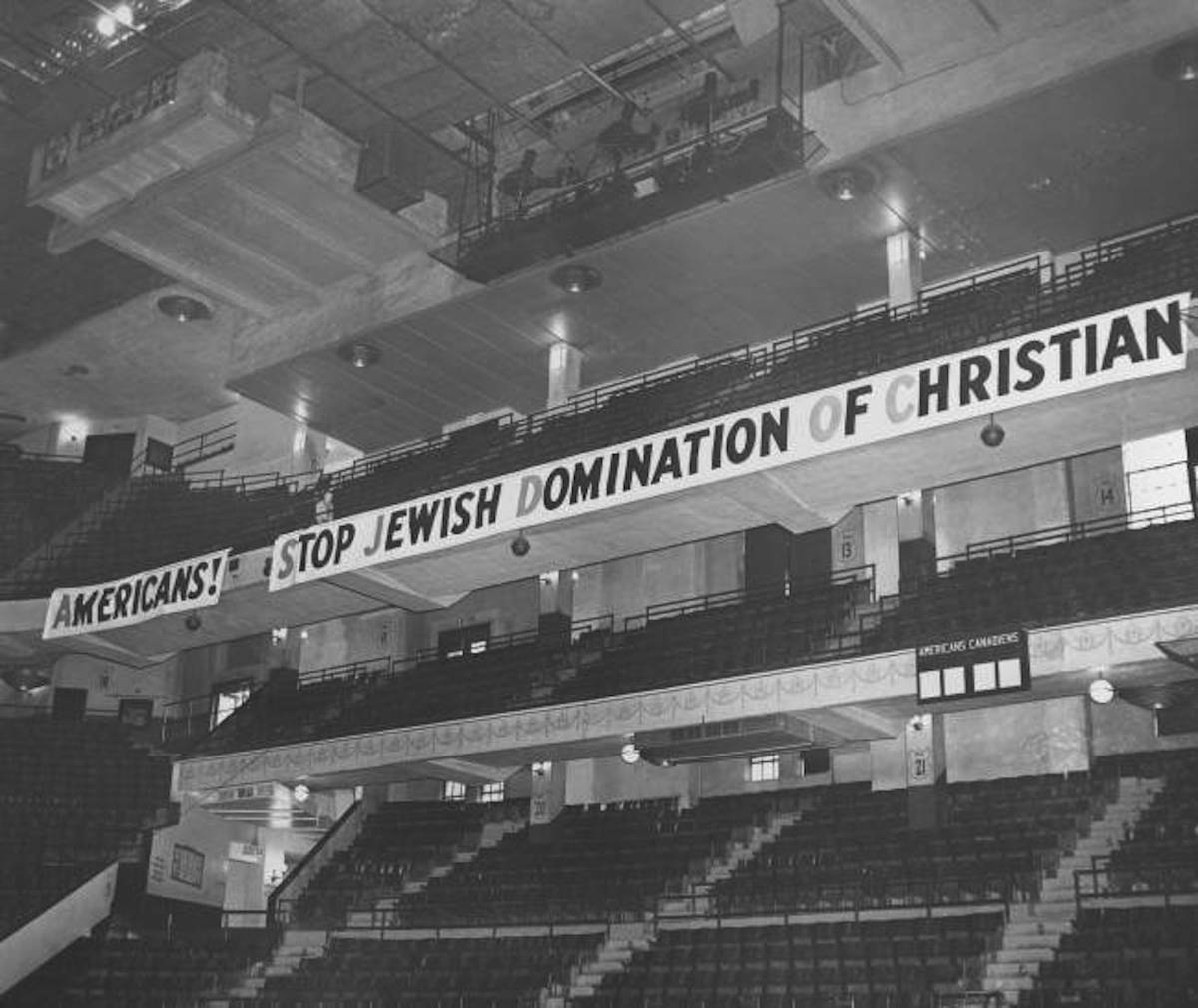 A banner with an anti-Jewish slogan is displayed at Madison Square, New York, February 20, 1939, shortly before adherents of the German American Bund, an organization largely financed by the government of Nazi Germany, began marching in for a rally. 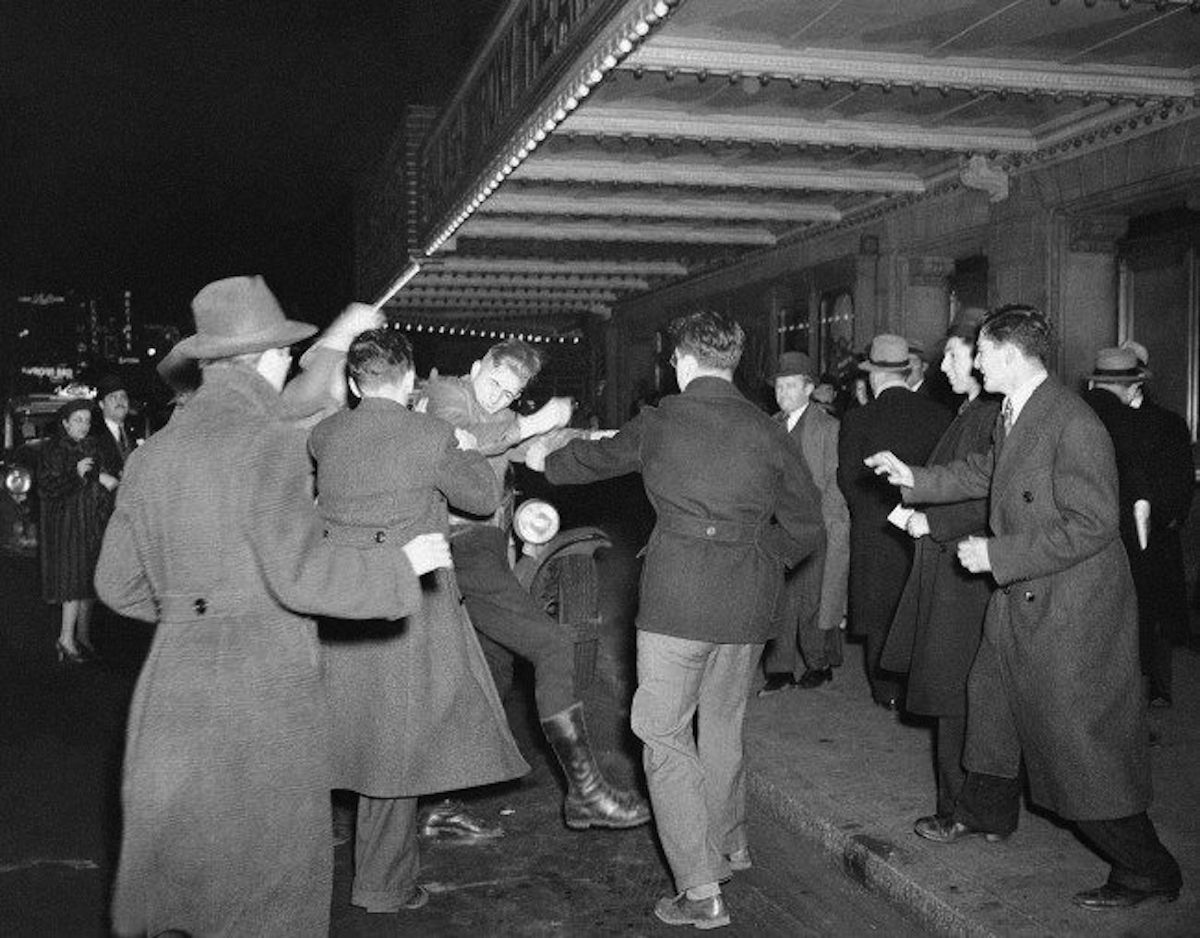 A crowd of demonstrators outside New York’s Madison Square Garden on Feb. 20, 1939, seize a uniformed member of the German American Bund who had emerged from a Bund rally in the Garden and attempted to enter a taxi. Previously, inside the arena, Nazis had beaten a man who jumped onto the stage and approached Bund Leader Fritz Kuhn.

“He was a 26-year-old plumber’s helper from Brooklyn named Isadore Greenbaum. When he ran on stage to protest, he was beaten up and had his pants ripped off as he was thrown from the stage. He was also arrested for disorderly conduct and fined $25.

“There was a debate at the time over whether the Bund should be allowed to have a rally, which – like so many things about the event—seems eerily contemporary. Greenbaum explained to the judge the day after the rally, ‘I went down to the Garden without any intention of interrupting. But being that they talked so much against my religion and there was so much persecution I lost my head, and I felt it was my duty to talk.’

“But in The New York Times, the American Jewish Committee argued that although the Bund was ‘completely anti-American and anti-Democratic… because we believe that the basic rights of free speech and free assembly must never be tampered with in the United States, we are opposed to any action to prevent the Bund from airing its views.”‘ – Marshall Curry 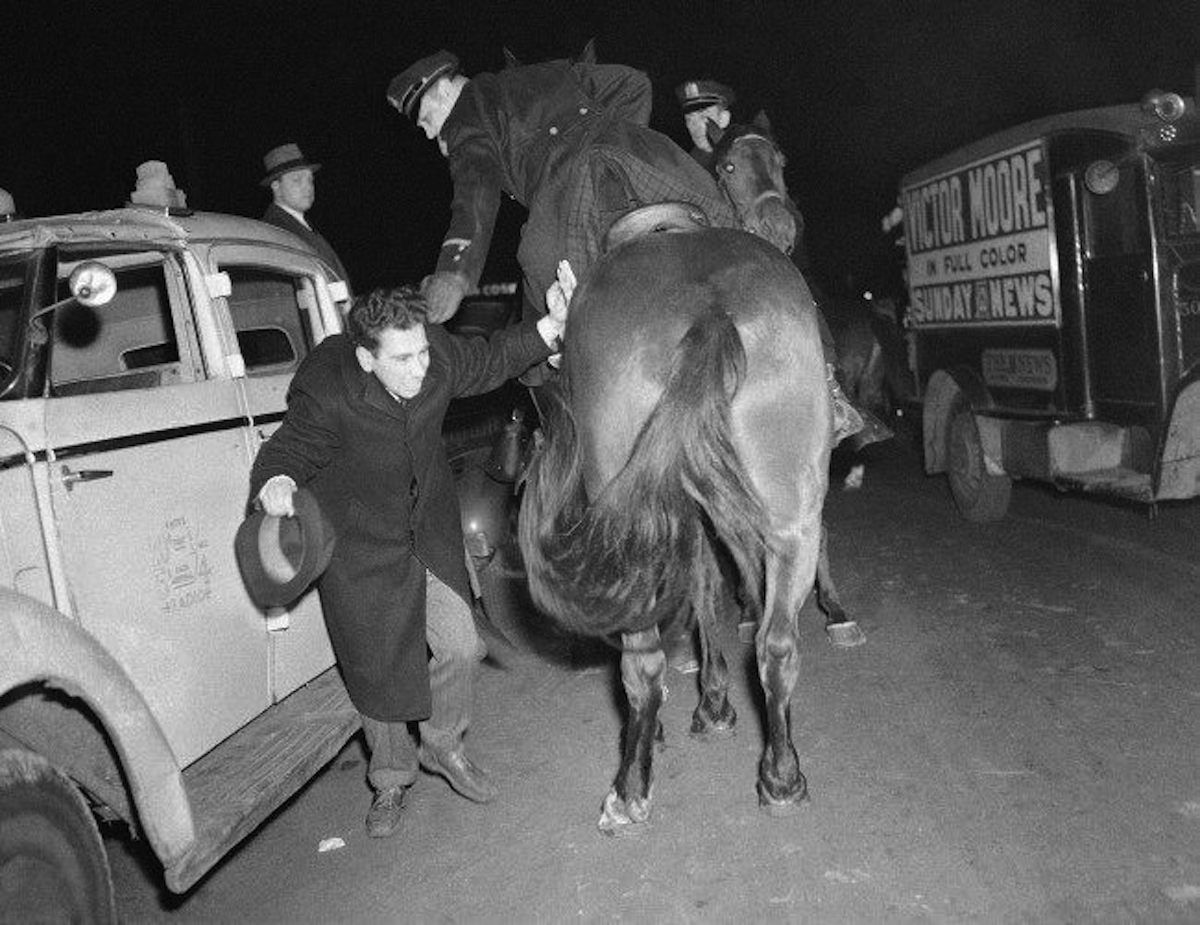 A mounted policeman strikes with the back of his gloved hand at an unidentified man near Madison Square Garden, New York, during the German American Bund rally Feb. 20, 1939. A force of 1,500 policemen were stationed in and around the Garden to forestall anti-Bund demonstrations. 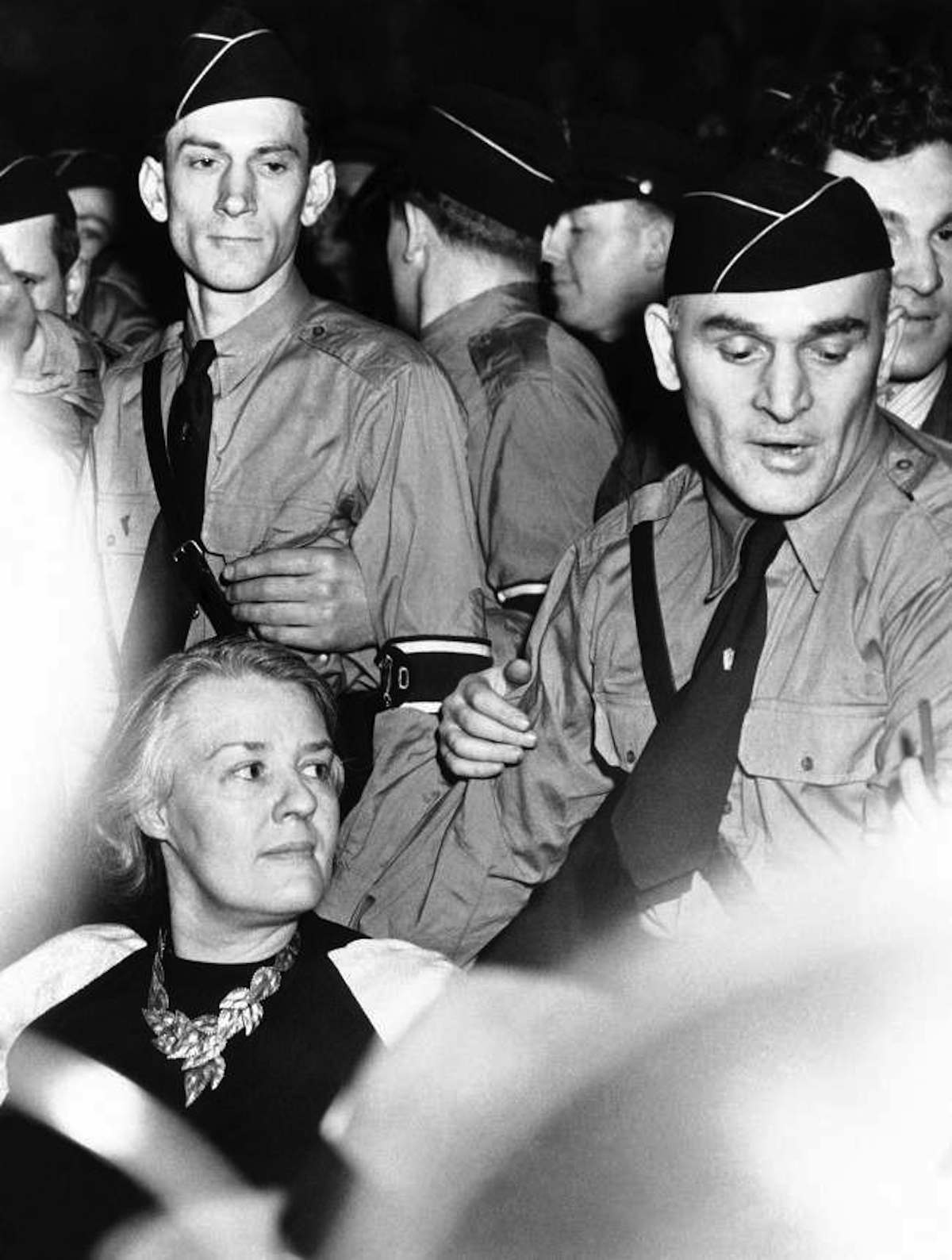 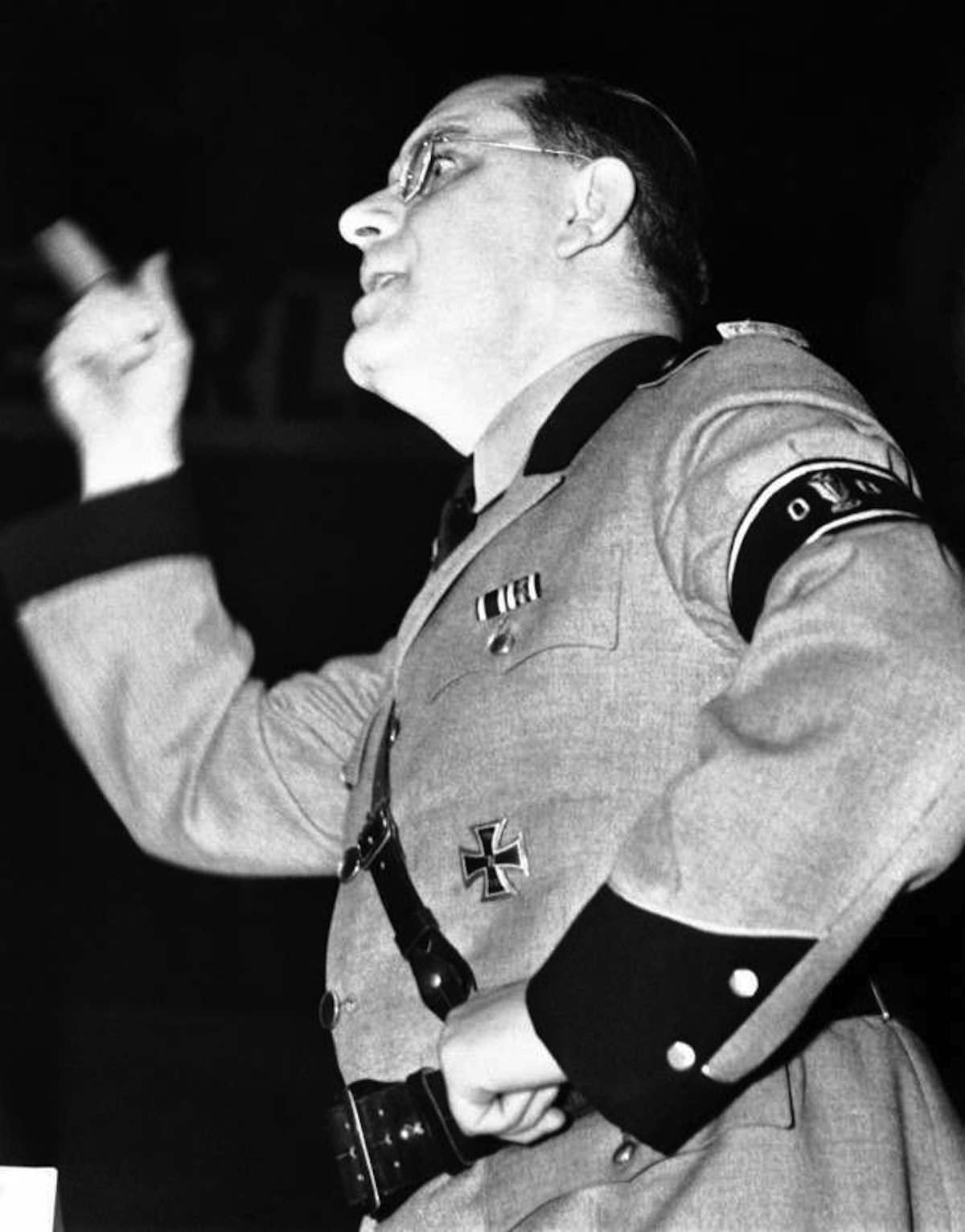 A NIGHT AT THE GARDEN