WHEN mankind emerged from the primordial ooze that was that was the 1940s, homes began a rapid upgrade.  The Western nations’ economies grew in tandem with technology, and the benefits began to enter the home in the form of appliances that promised to transform the household.  Now you could own a toaster  – oh, the possibilities! 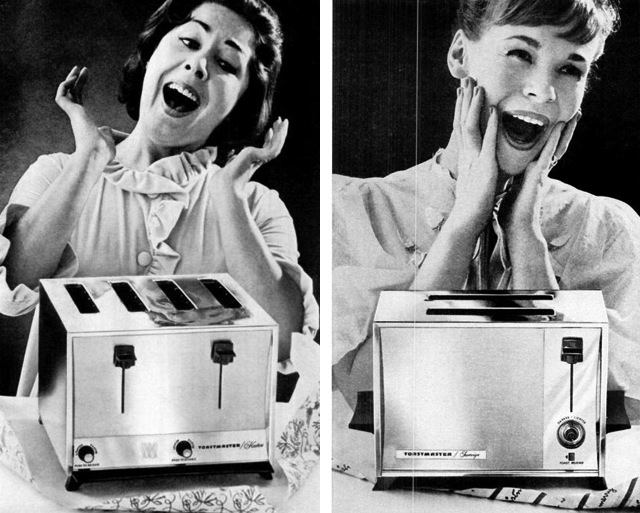 It just so happened that when all these new life-changers entered the market, the only people doing any chores in the homestead were the ladies.  So, naturally the advertising was targeted 100% to females (even though the guys still held the pocketbook).  This trend actually continued all the way through the 1970s, and then began to taper off when it was no longer accurate or appropriate to portray women as the sole beneficiary of these magical appliances. 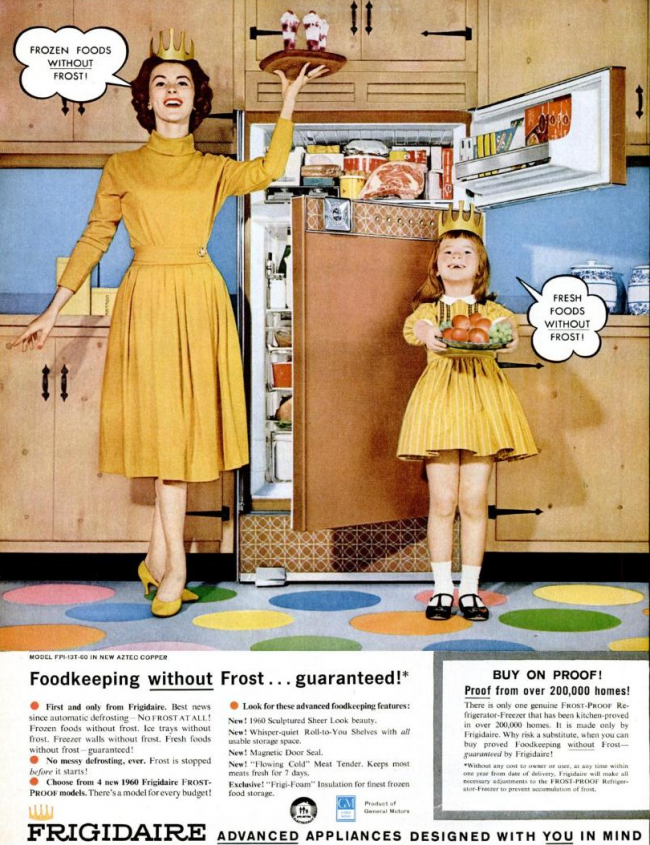 Appliance advertising from the late 1940s to early 1960s portrayed the products as man’s greatest blessing bestowed on womankind. The hallmark of this phase is a giddy appreciation from the fairer sex for these scientific marvels.  Blessed be the husband (still slightly drunk from his mid-day whiskey sour) who delivers unto his wife this wondrous gift. 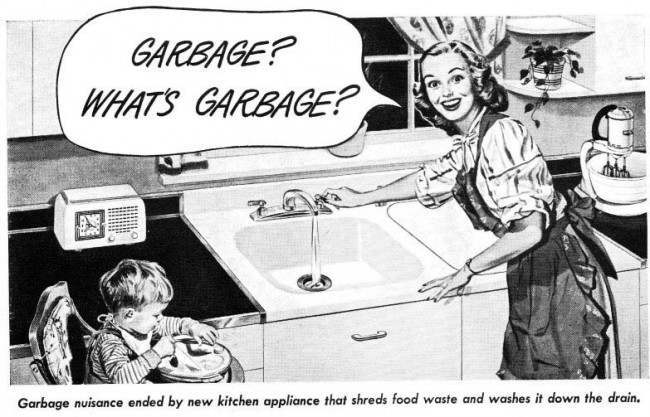 Truth be told, these appliances were a huge relief to the homemakers of the world. While we may choose to focus on the inequality in the division of labor, the fact remains that this stuff really did save countless hours of backbreaking work. 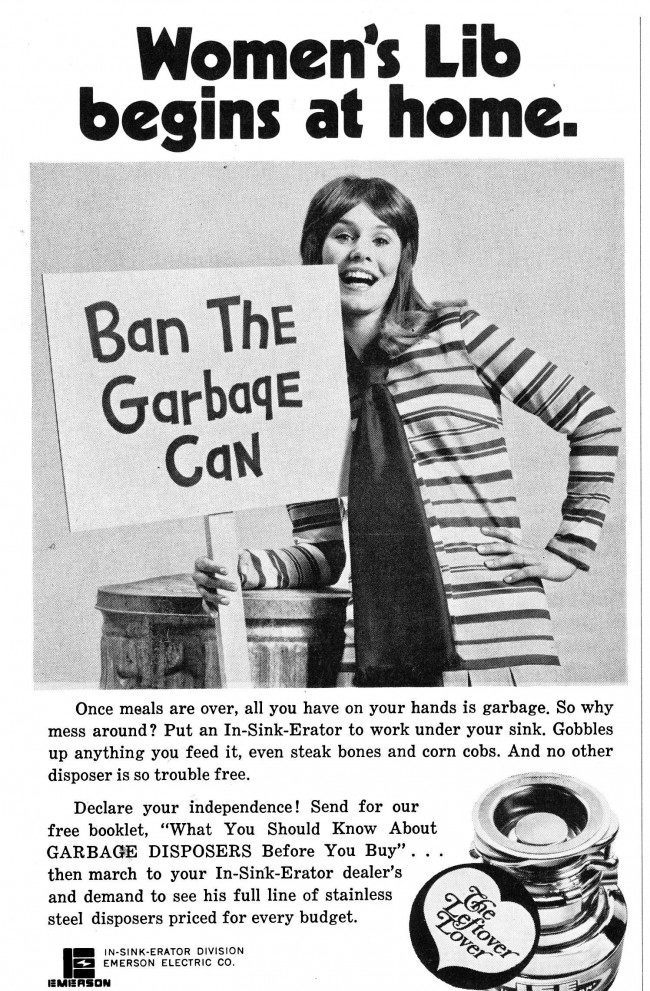 In fact, you could argue that these products were a form of liberation, for eventually they freed up enough time to allow women to enter the workforce without compromising a tidy homestead.  As awful as it is to admit, the surge toward equality in the workforce in the Seventies may owe more to this practicality than any meaningful change in the cultural mindset. 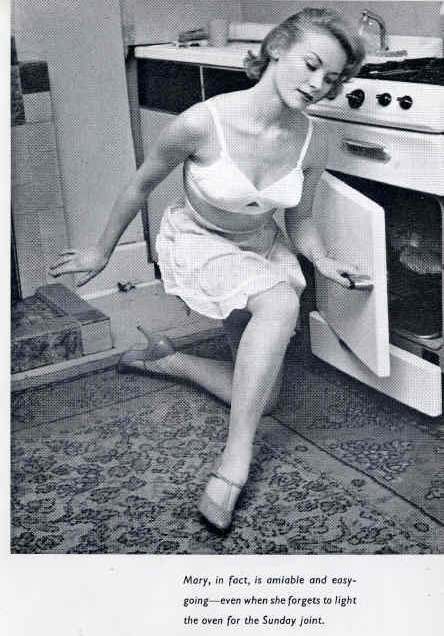 “Mary, in fact, is amiable and easy-going – even when she forgets to light the oven for the Sunday joint.”

This comes from a men’s magazine from the 1950s. It’s special because it is possibly the best representation of the mid-century male’s fantasy: a chick in her underwear cooking meat. 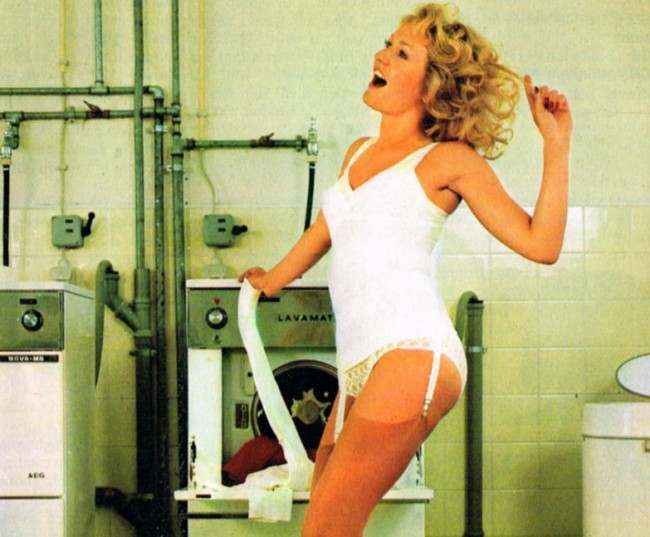 Fast forward a couple decades and things haven’t changed much I suppose.  It is interesting to note what has changed: Since the 1970s, women’s self-reported happiness has fallen, relative to that of men. This seems paradoxical given all the joy these appliances have provided and the resultant strides in equality.  We’ll leave that debate to the armchair sociologists.  Moving on… 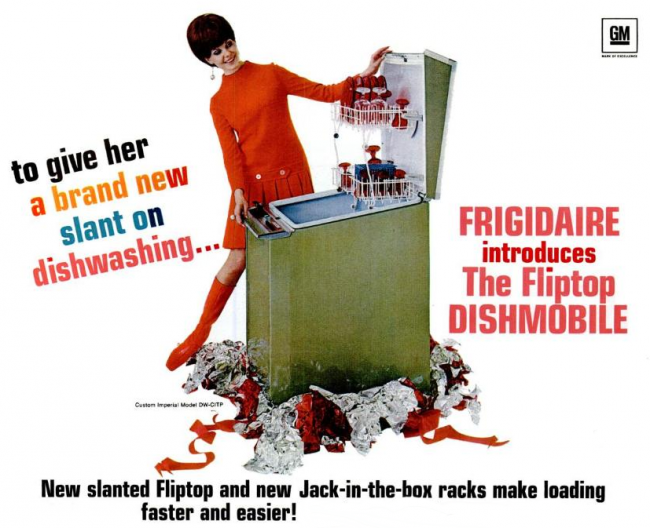 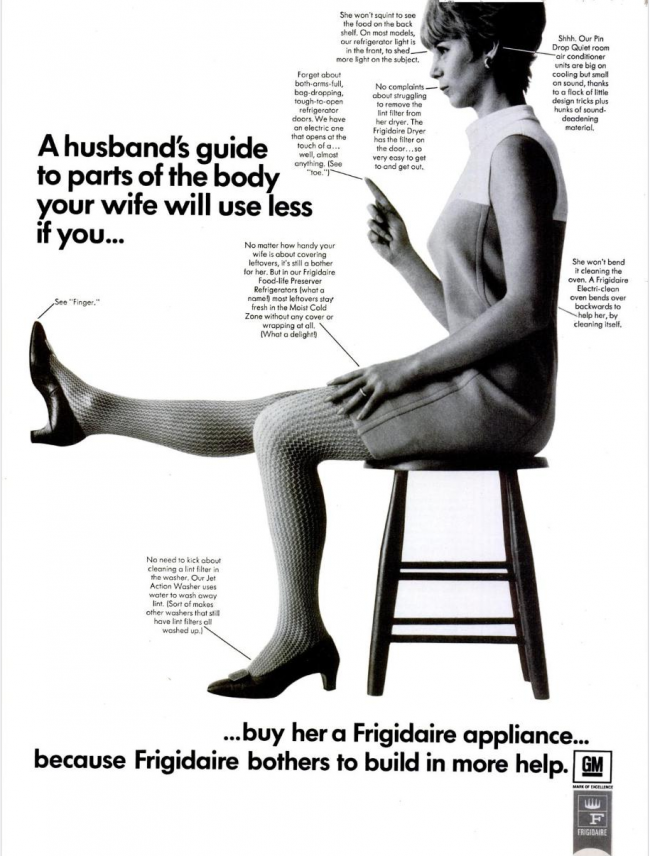 This is a clear message to the fellas: start upgrading those appliances, your hot wife’s body depends on it! 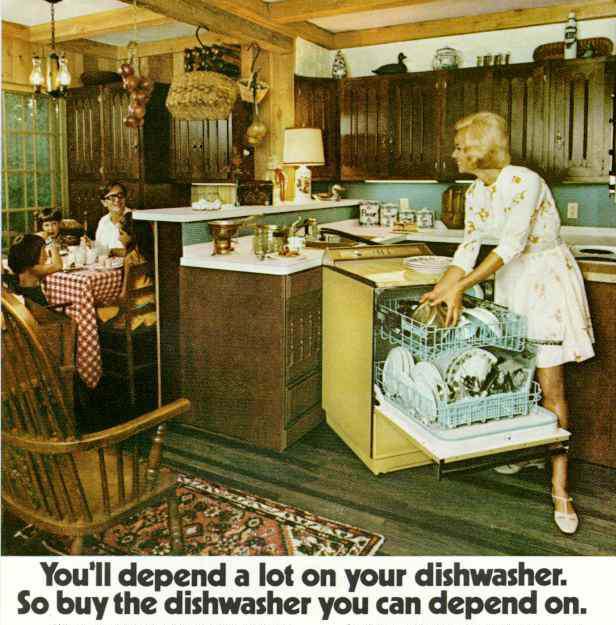 By the Seventies, it still was a no-brainer to feature the woman doing the dishes alone (using an oddly placed dishwasher).  Can your mind even comprehend a vintage ad showing the dude slaving in the kitchen while the gal sits comfortably? 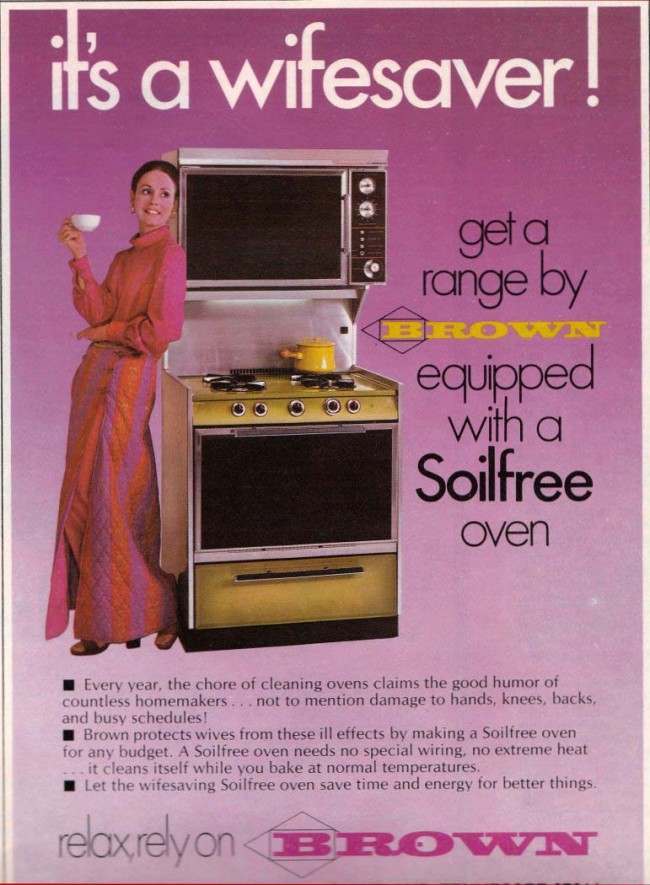 “Every year, the chore of cleaning ovens claims the good humor of countless homemakers… not to mention damage to hands, knees, backs and busy schedules!”

It’s a given that the wife is going to be doing this dirty job; but, c’mon fellas – open up that wallet and keep your woman happy. In other words, if you want to avoid her bad mood on Oven Cleaning Day, and don’t want to hear her bitch about it, get a “soilfree” oven…. it’s a Wifesaver! 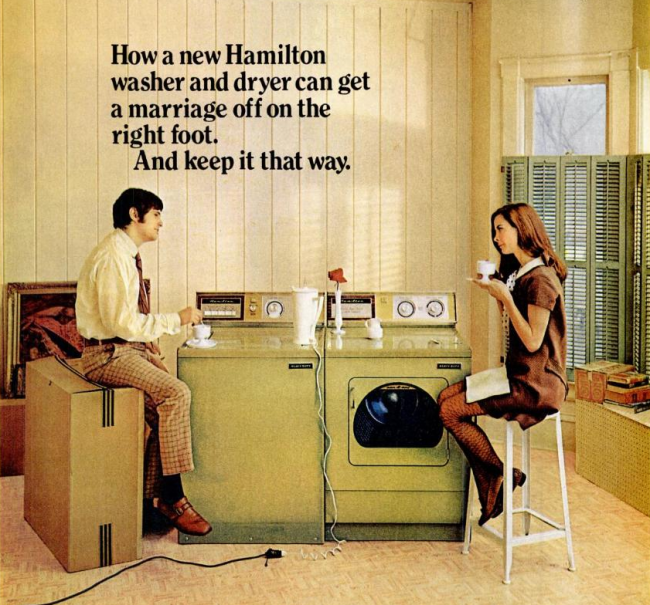 Here again, in the early Seventies, appliances are marketed as marriage saving machines. 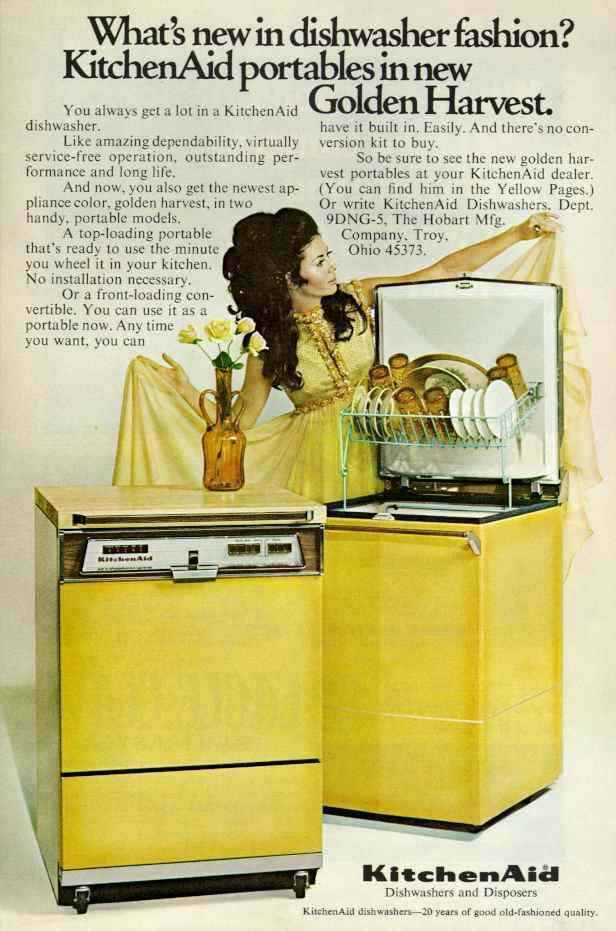 For the better part of the Seventies, appliances came in a handful of colors: Harvest Gold, Avocado Green, Burnt Orange, and Brown, Browner, and Brownest.

These were the official colors of the decade – telephones, wallpaper, sofas, etc. all proudly wore their 70s colors… until the pastel obsessed 1980s came along and destroyed everything earth toned. 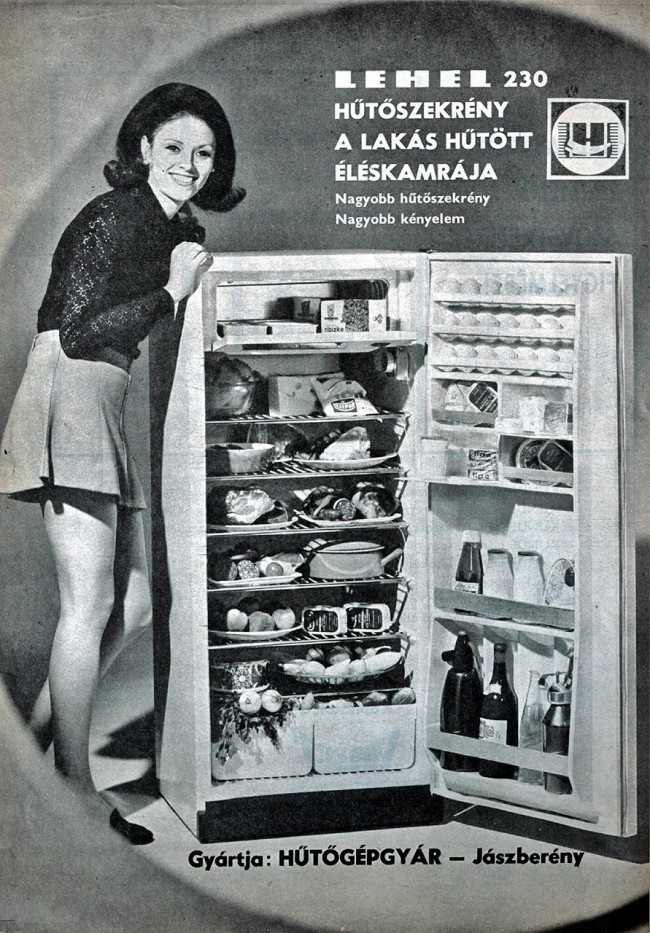 Of course, it should be noted that the dates of the appliance invasion varied by country.  The US was the primary beneficiary of a booming post-war economy, and so these new (and expensive) products entered the mainstream in the States first. 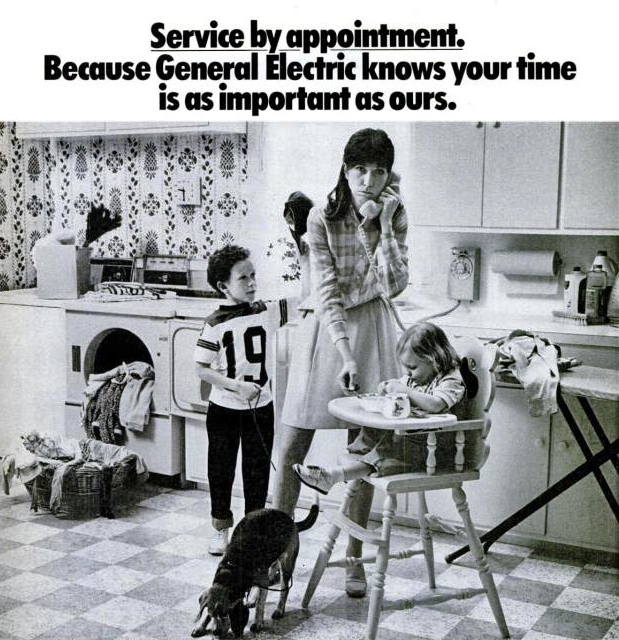 By the end of the Seventies, the mystique of these appliances was getting old.  Plus, the tried-and-true technique of portraying these machines as a woman’s salvation was over.  Eventually, ads just featured the machines themselves – still shining and radiant in their own glory.  But the beaming bride by their side is forever gone.

My how times have changed. 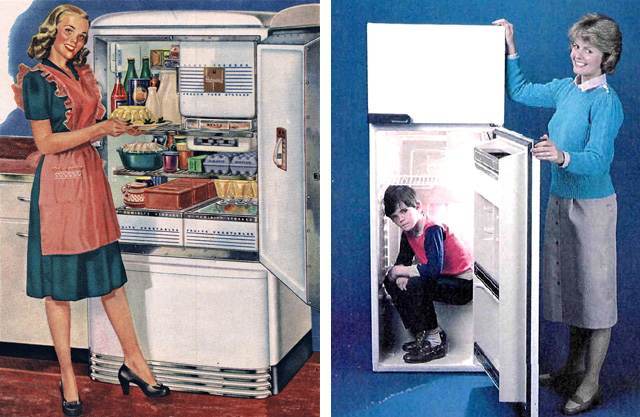