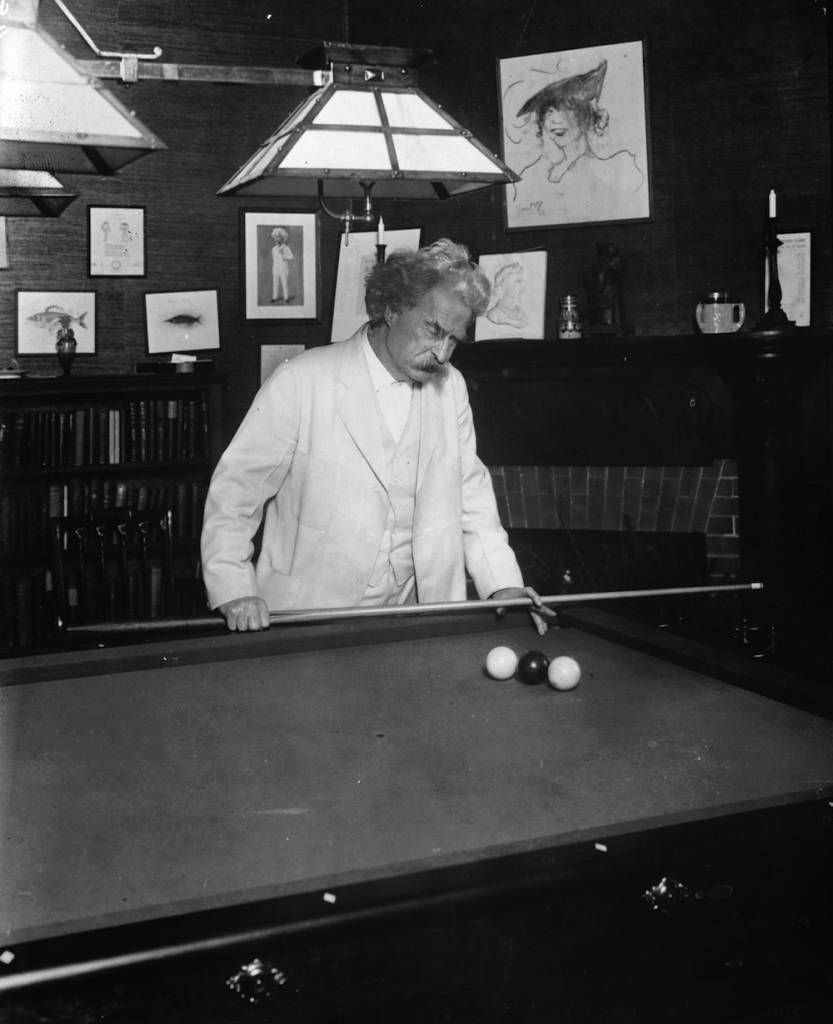 “I don’t think the prayer will be published in my time. None but the dead are permitted to tell the truth”

So said Mark Twain when War Prayer, his comment on the Philippine-American War (1899-1902), was rejected by Harper’s Bazaar. The story was, said the magazine’s editor, “not quite suited to a woman’s magazine.” 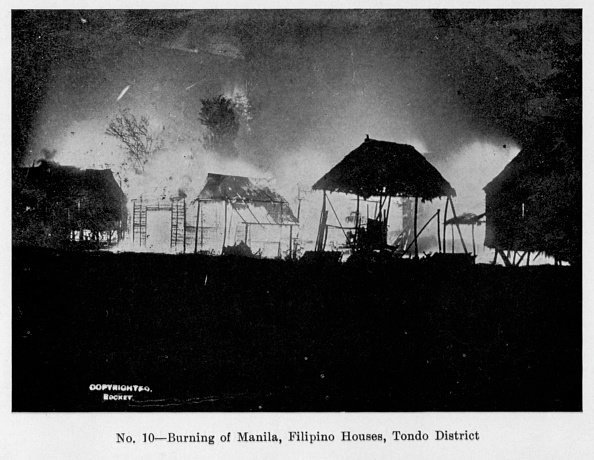 Nighttime view of the burning of Manila, with Filipino houses going up in flames, in the Tondo district, 1899.

He was proved right. Twain (aka Samuel Langhorne Clemens) died in 1910. In 1923, War Prayer was finally published, appearing in the collection Europe and Elsewhere. 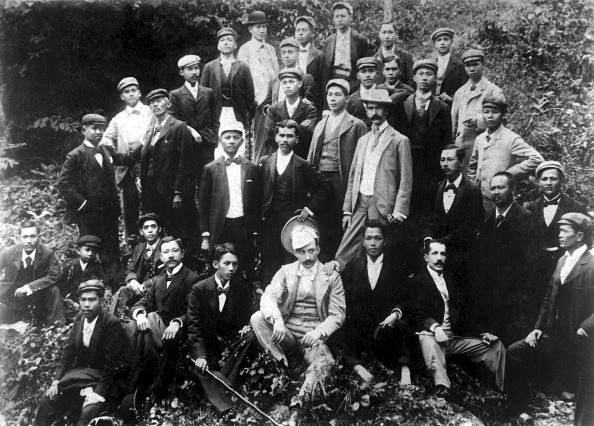 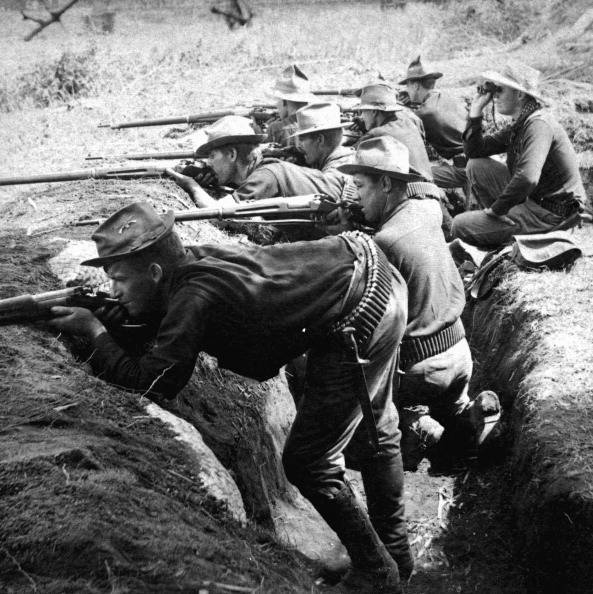 During the Philippine-American War, members of an unidentified American Army regiment shoot at Filipino insurgents while positioned in trenches, 1899.

When you pray for victory, what else do you pay for? What is your heart’s desire?

It was a time of great and exalting excitement. The country was up in arms, the war was on, in every breast burned the holy fire of patriotism; the drums were beating, the bands playing, the toy pistols popping, the bunched firecrackers hissing and spluttering; on every hand and far down the receding and fading spread of roofs and balconies a fluttering wilderness of flags flashed in the sun; daily the young volunteers marched down the wide avenue gay and fine in their new uniforms, the proud fathers and mothers and sisters and sweethearts cheering them with voices choked with happy emotion as they swung by; nightly the packed mass meetings listened, panting, to patriot oratory which stirred the deepest deeps of their hearts, and which they interrupted at briefest intervals with cyclones of applause, the tears running down their cheeks the while; in the churches the pastors preached devotion to flag and country, and invoked the God of Battles beseeching His aid in our good cause in outpourings of fervid eloquence which moved every listener. It was indeed a glad and gracious time, and the half dozen rash spirits that ventured to disapprove of the war and cast a doubt upon its righteousness straightway got such a stern and angry warning that for their personal safety’s sake they quickly shrank out of sight and offended no more in that way. 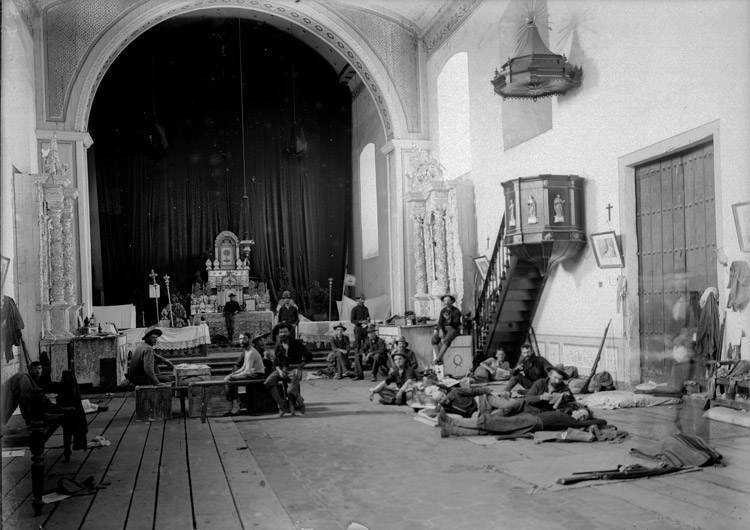 Interior of church occupied by American troops.
Rizal Province, 1899 Via

Sunday morning came — next day the battalions would leave for the front; the church was filled; the volunteers were there, their young faces alight with martial dreams — visions of the stern advance, the gathering momentum, the rushing charge, the flashing sabers, the flight of the foe, the tumult, the enveloping smoke, the fierce pursuit, the surrender! Then home from the war, bronzed heroes, welcomed, adored, submerged in golden seas of glory! With the volunteers sat their dear ones, proud, happy, and envied by the neighbors and friends who had no sons and brothers to send forth to the field of honor, there to win for the flag, or, failing, die the noblest of noble deaths. The service proceeded; a war chapter from the Old Testament was read; the first prayer was said; it was followed by an organ burst that shook the building, and with one impulse the house rose, with glowing eyes and beating hearts, and poured out that tremendous invocation

God the all-terrible! Thou who ordainest! Thunder thy clarion and lightning thy sword! 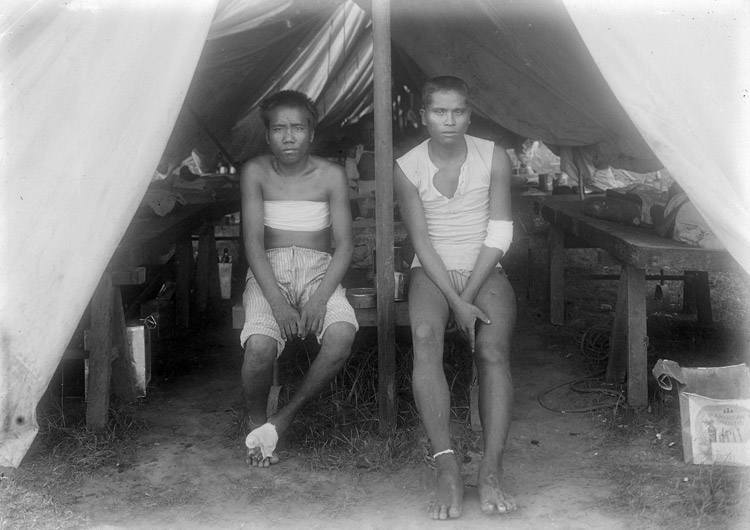 Then came the “long” prayer. None could remember the like of it for passionate pleading and moving and beautiful language. The burden of its supplication was, that an ever-merciful and benignant Father of us all would watch over our noble young soldiers, and aid, comfort, and encourage them in their patriotic work; bless them, shield them in the day of battle and the hour of peril, bear them in His mighty hand, make them strong and confident, invincible in the bloody onset; help them to crush the foe, grant to them and to their flag and country imperishable honor and glory —

An aged stranger entered and moved with slow and noiseless step up the main aisle, his eyes fixed upon the minister, his long body clothed in a robe that reached to his feet, his head bare, his white hair descending in a frothy cataract to his shoulders, his seamy face unnaturally pale, pale even to ghastliness. With all eyes following him and wondering, he made his silent way; without pausing, he ascended to the preacher’s side and stood there waiting. With shut lids the preacher, unconscious of his presence, continued with his moving prayer, and at last finished it with the words, uttered in fervent appeal, “Bless our arms, grant us the victory, O Lord our God, Father and Protector of our land and flag!”

The stranger touched his arm, motioned him to step aside — which the startled minister did — and took his place. During some moments he surveyed the spellbound audience with solemn eyes, in which burned an uncanny light; then in a deep voice he said:

“I come from the Throne — bearing a message from Almighty God!” The words smote the house with a shock; if the stranger perceived it he gave no attention. “He has heard the prayer of His servant your shepherd, and will grant it if such shall be your desire after I, His messenger, shall have explained to you its import — that is to say, its full import. For it is like unto many of the prayers of men, in that it asks for more than he who utters it is aware of — except he pause and think.

“God’s servant and yours has prayed his prayer. Has he paused and taken thought? Is it one prayer? No, it is two — one uttered, the other not. Both have reached the ear of Him Who heareth all supplications, the spoken and the unspoken. Ponder this — keep it in mind. If you would beseech a blessing upon yourself, beware! lest without intent you invoke a curse upon a neighbor at the same time. If you pray for the blessing of rain upon your crop which needs it, by that act you are possibly praying for a curse upon some neighbor’s crop which may not need rain and can be injured by it.

“You have heard your servant’s prayer — the uttered part of it. I am commissioned of God to put into words the other part of it — that part which the pastor — and also you in your hearts — fervently prayed silently. And ignorantly and unthinkingly? God grant that it was so! You heard these words: ‘Grant us the victory, O Lord our God!’ That is sufficient. the whole of the uttered prayer is compact into those pregnant words. Elaborations were not necessary. When you have prayed for victory you have prayed for many unmentioned results which follow victory — must follow it, cannot help but follow it. Upon the listening spirit of God fell also the unspoken part of the prayer. He commandeth me to put it into words. Listen!

“O Lord our Father, our young patriots, idols of our hearts, go forth to battle — be Thou near them! With them — in spirit — we also go forth from the sweet peace of our beloved firesides to smite the foe. O Lord our God, help us to tear their soldiers to bloody shreds with our shells; help us to cover their smiling fields with the pale forms of their patriot dead; help us to drown the thunder of the guns with the shrieks of their wounded, writhing in pain; help us to lay waste their humble homes with a hurricane of fire; help us to wring the hearts of their unoffending widows with unavailing grief; help us to turn them out roofless with little children to wander unfriended the wastes of their desolated land in rags and hunger and thirst, sports of the sun flames of summer and the icy winds of winter, broken in spirit, worn with travail, imploring Thee for the refuge of the grave and denied it — for our sakes who adore Thee, Lord, blast their hopes, blight their lives, protract their bitter pilgrimage, make heavy their steps, water their way with their tears, stain the white snow with the blood of their wounded feet! We ask it, in the spirit of love, of Him Who is the Source of Love, and Who is the ever-faithful refuge and friend of all that are sore beset and seek His aid with humble and contrite hearts. Amen.

(After a pause.) “Ye have prayed it; if ye still desire it, speak! The messenger of the Most High waits!”

It was believed afterward that the man was a lunatic, because there was no sense in what he said. 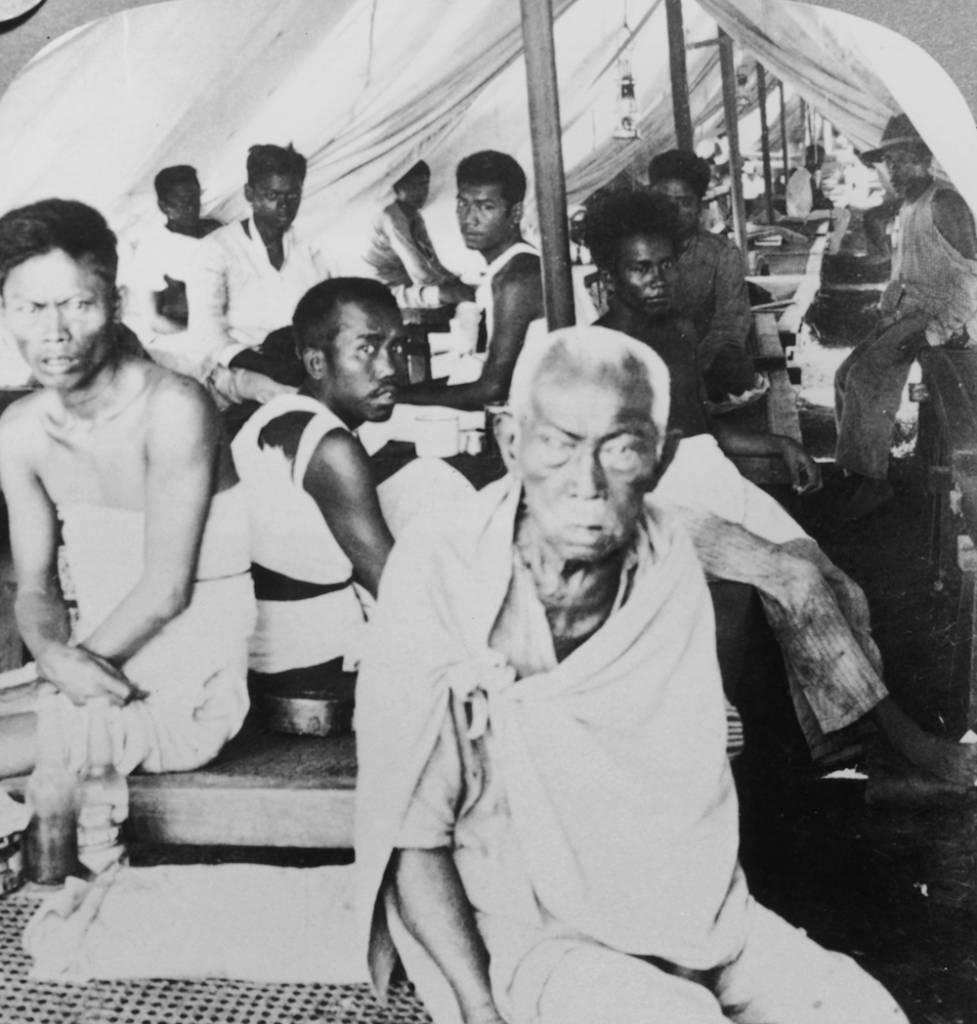 Injured Philippinos in a makeshift hospital in the Philippines during the Philippine-American War, circa 1899. (Photo by Hulton Archive/Getty Images) 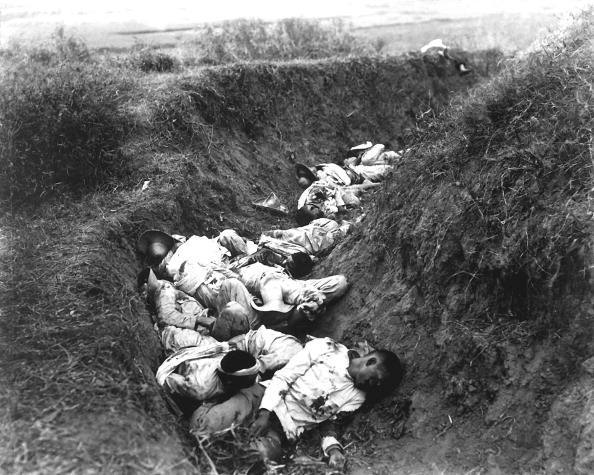 View of the insurgent Filipino dead as they fell in their trenches during fighting in the Philippine-Ameirican War, near Santa Ana, February 1899. 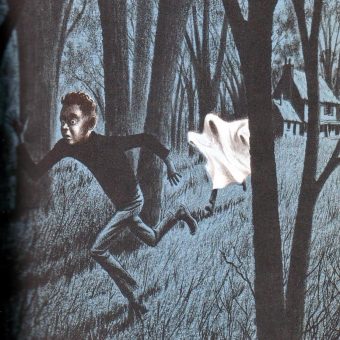 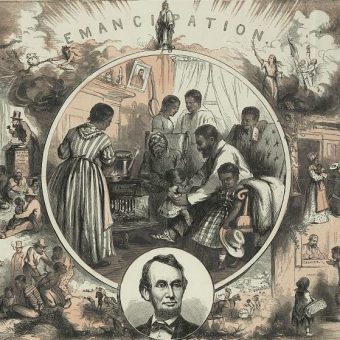