For his Documerica assignment, photographer Jack Corn (born 1929)showed us the life of American coal miners in West Virginia and Virginia.

Corn was one of the 70 photographers commissioned by the US Environmental Protection Agency to take photos for the Documerica project.  “They were pretty bad off when I took the photos,” said Corn in 2013, when his work was exhibited at the National Archives. “But this is how it was.” 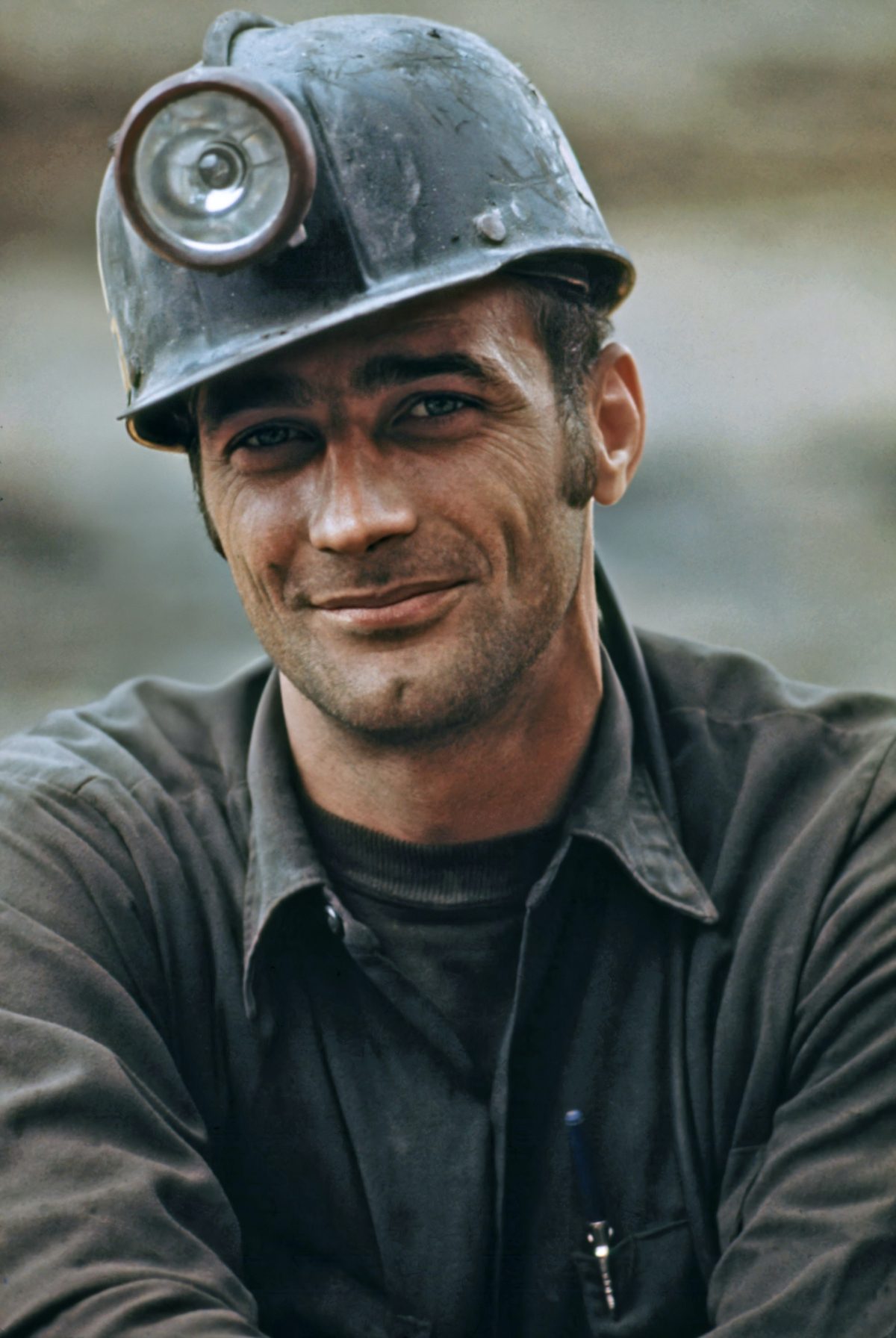 One of a series of portraits of miners waiting to go to work on the 4 P.M. to Midnight Shift at the Virginia-Pocahontas Coal Company Mine, near Richlands, Virginia. The Mines are open around the clock. Two shifts work in digging and bringing out the coal, the other is involved in cleanup operations. The cleanup or “Hoot-Owl” shift begins at midnight.

“You have to treat everybody with great respect, treat everybody the same. Sometimes people who are college-educated, the things they say are less profound than what people in the mountains say… People, if you take time and talk to them, there’s a lot more depth to them than people think.” 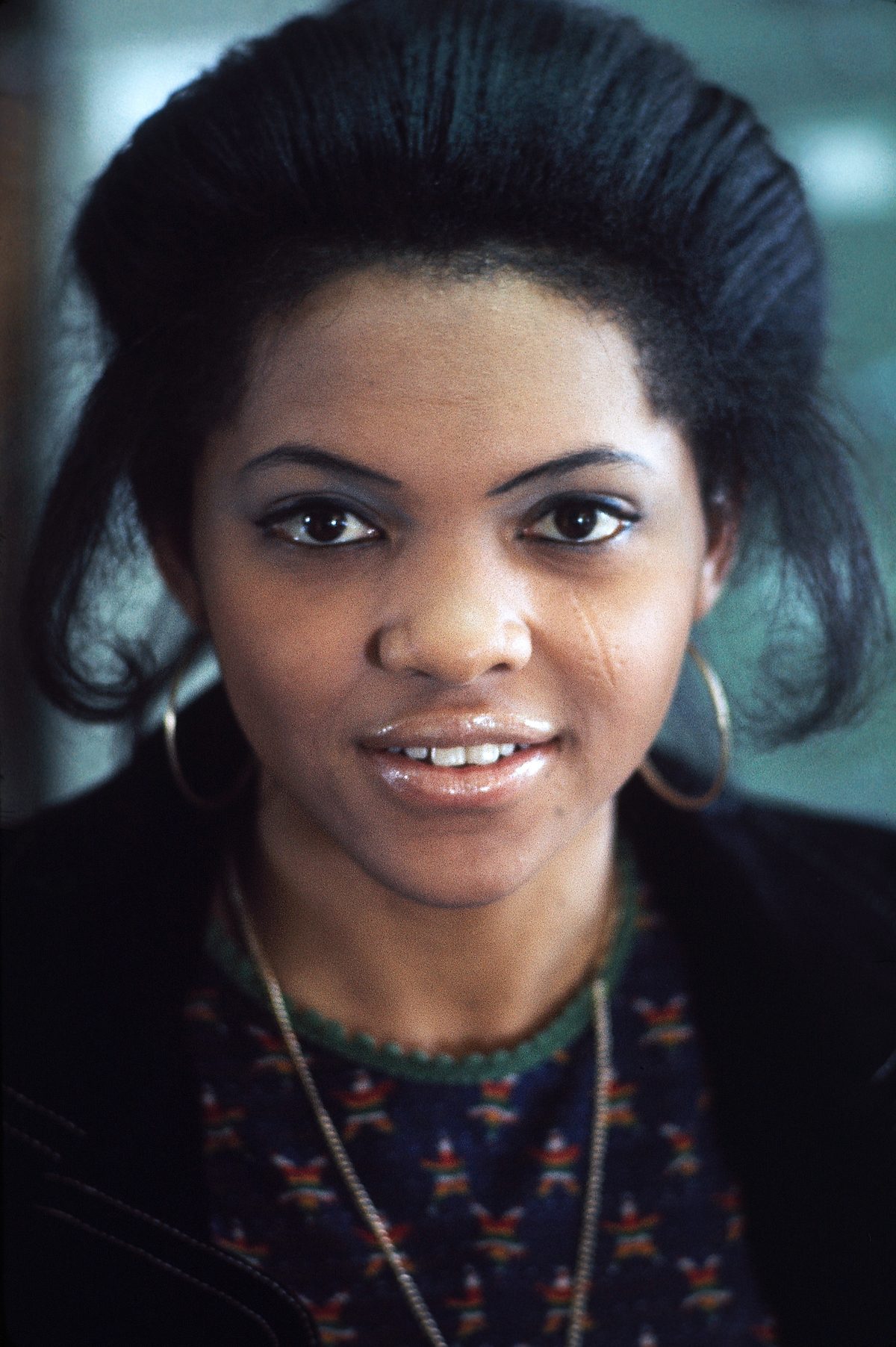 Clarice Brown, 19, is a secretary in the United Mine Workers Field Service office in Charleston, West Virginia. Her father was a miner who died of black lung disease, caused by shortage of breath as the lung sacs are filled with coal dust. 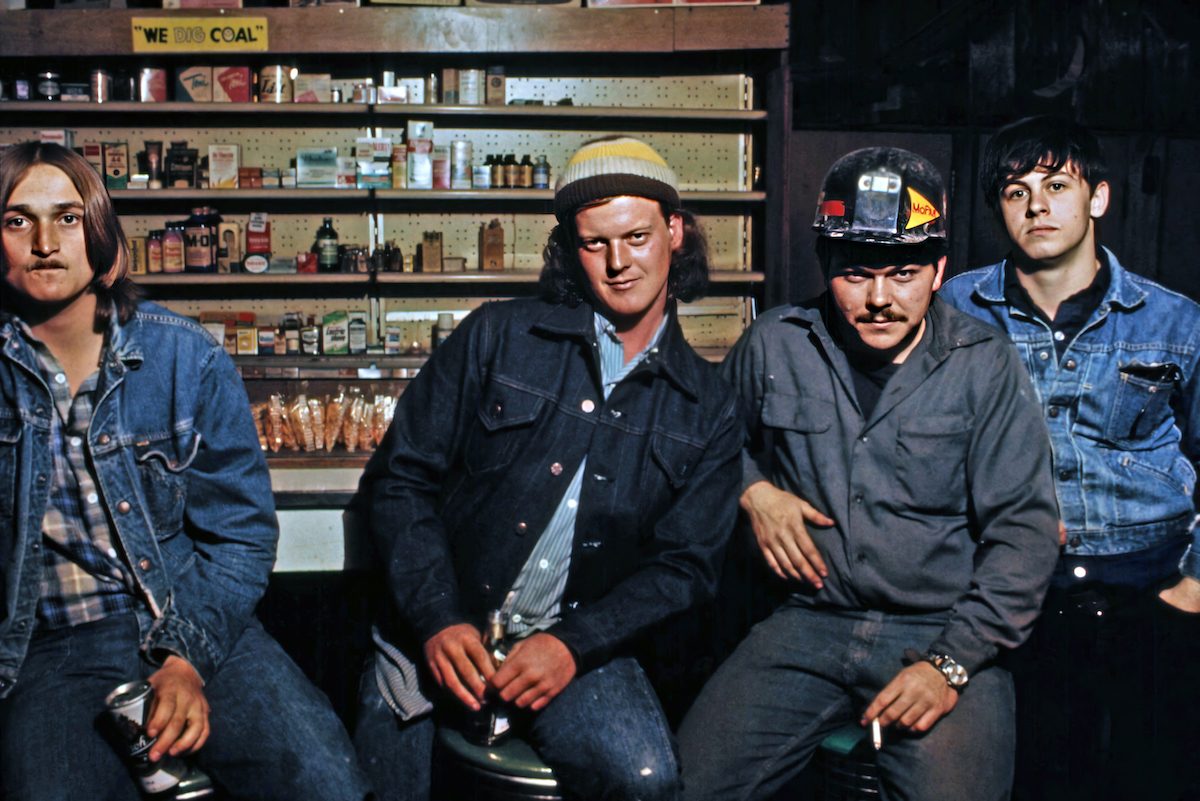 “Four young men gather in a beer joint in Clothier, West Virginia, near Madison. They are (L-R): Michael Doss, 18; Lanny Green, 21; Junior Jefferoy, 20; and Robert Johnson, 18. “All their parents work or have worked in the mine. Jefferoy is a mining foreman after two years, but does not like it and wants to join the navy. Green can’t find a job but would like to work for the railroad. Doss isn’t working, but is waiting for a job in the mines.”

“Four young men gather in a beer joint in Clothier, West Virginia, near Madison. They are (L-R): Michael Doss, 18; Lanny Green, 21; Junior Jefferoy, 20; and Robert Johnson, 18. “All their parents work or have worked in the mine. Jefferoy is a mining foreman after two years, but does not like it and wants to joing the navy. Green can’t find a job but would like to work for the railroad. Doss isn’t working, but is waiting for a job in the mines.” 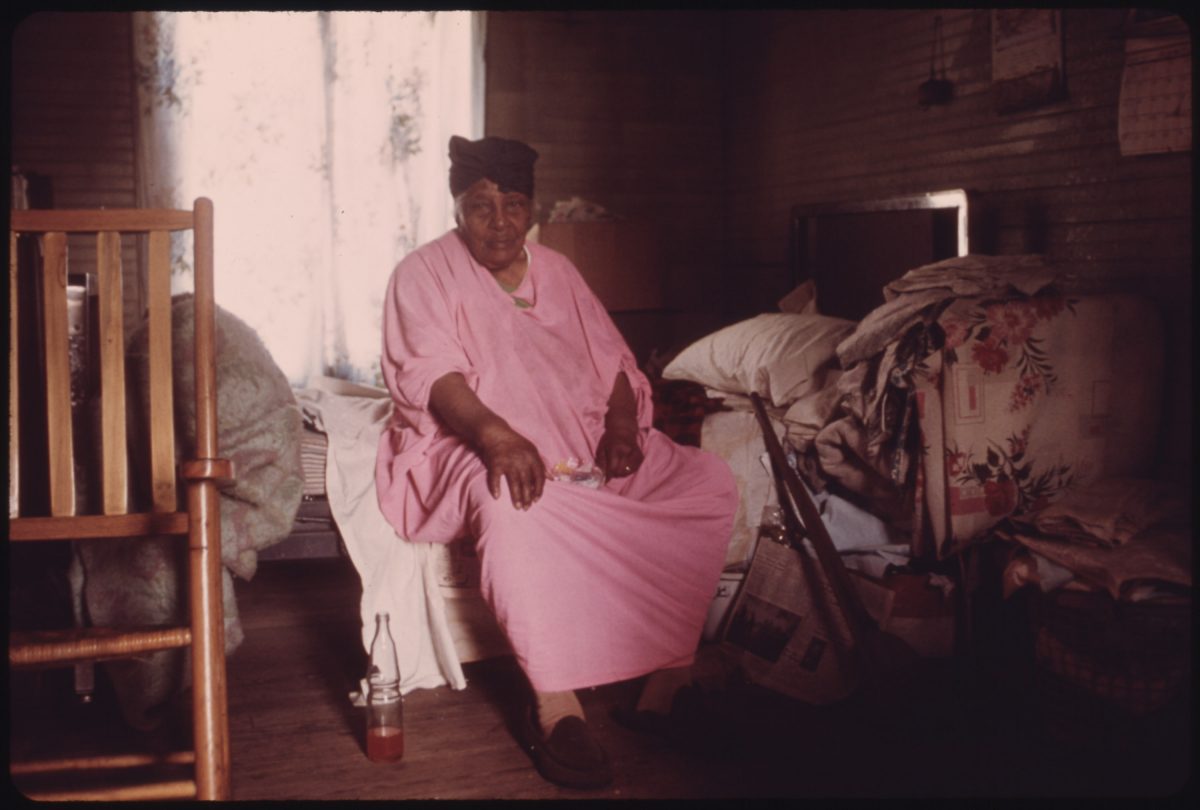 Mrs. Thaxton, 90, Is a Widow and Mother of Retried Miners Who Live in Rhodell, West Virginia, near Beckley. Nurses in the Outreach Program From the Mountaineer Health Plan Visit Her and Check Her Health 04/1974 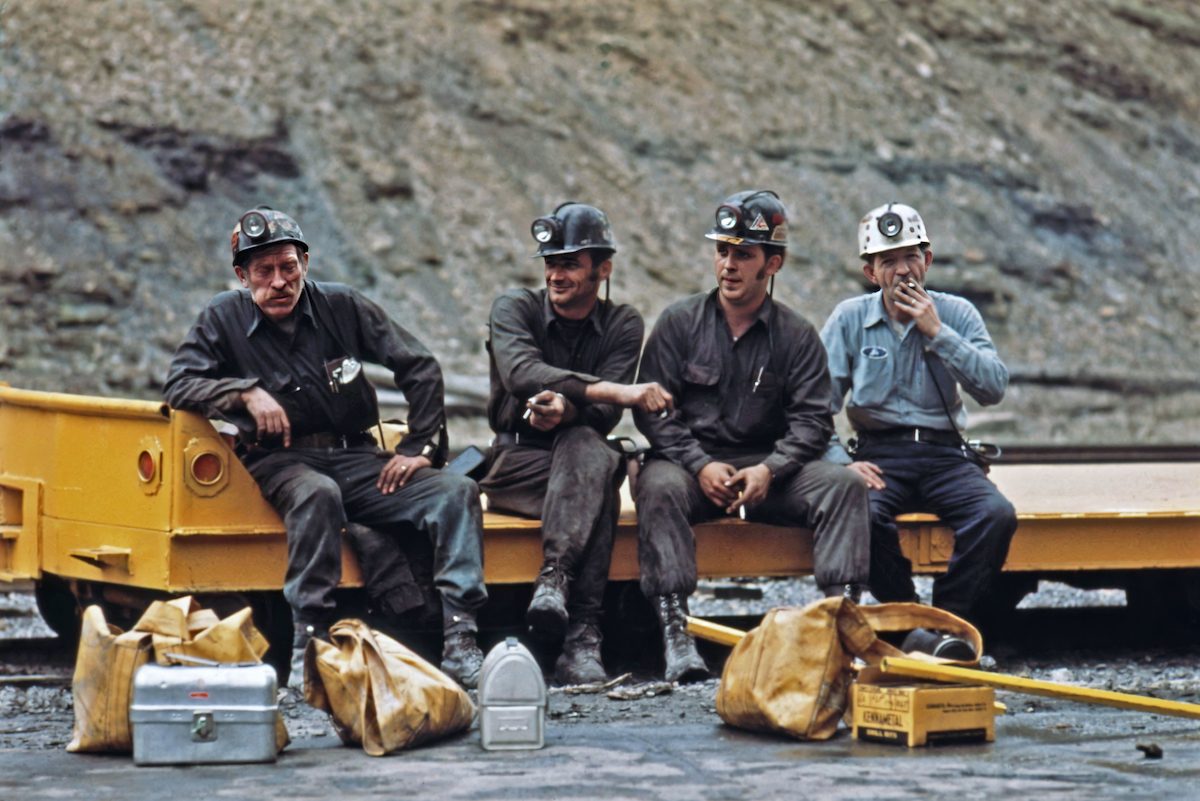 A group of miners waiting to go to work on the 4 pm-to-midnight shift at the Virginia-Pocahontas coal company mine #4 near Richlands, Virginia. They are sitting on a shuttle car of the type which wikll take them into the mines, and also is used for work on the outsoide. The yellow bags contaion tools and equipment. 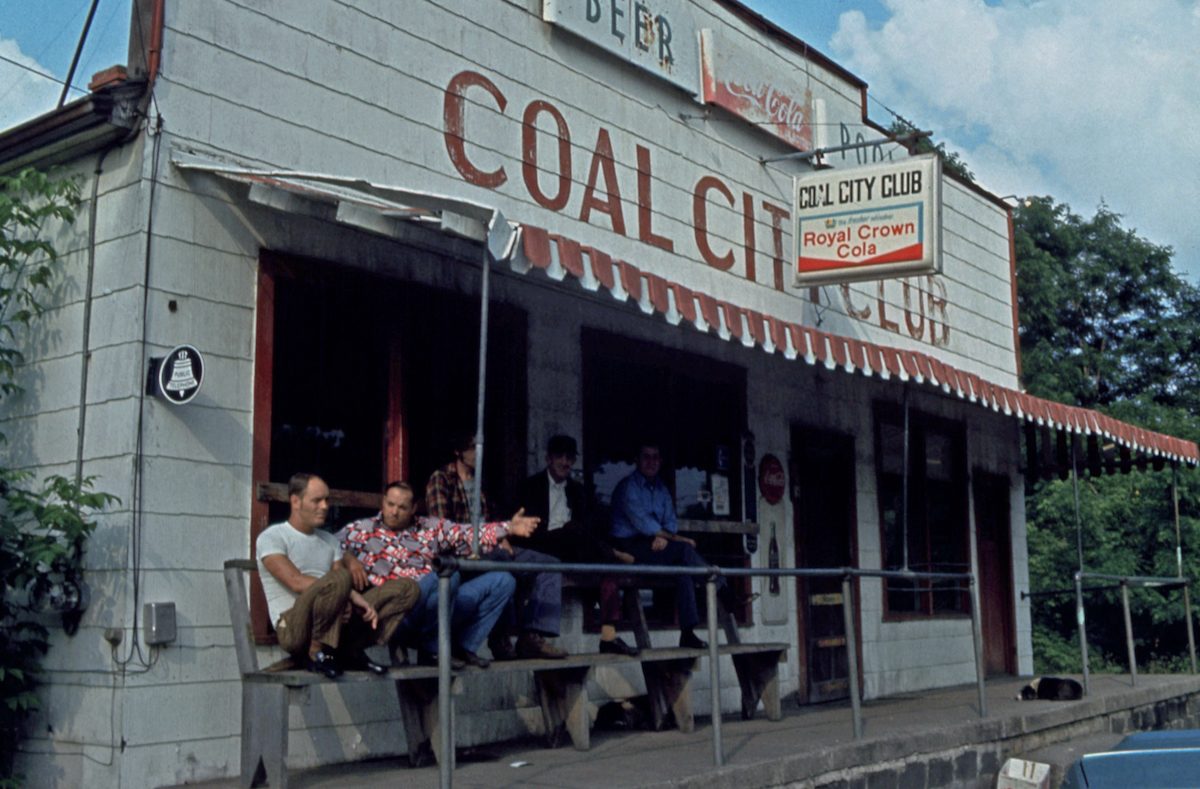 Coal City Club in Coal City, West Virginia, a part of Beckley.
All of the men are coal miners. Note that some of them are “hunkering down” rather than sitting. This is a familiar stance to all miners who use this posture in the mine shafts which have low ceilings.

“The people of Appalachia are a proud people. They were very open and honest with me, welcoming me into their homes and to their tables. They loved the beauty and solitude of the mountains. I understood their love of the land… Coal mining changed the landscape forever and the land was never again the same.” 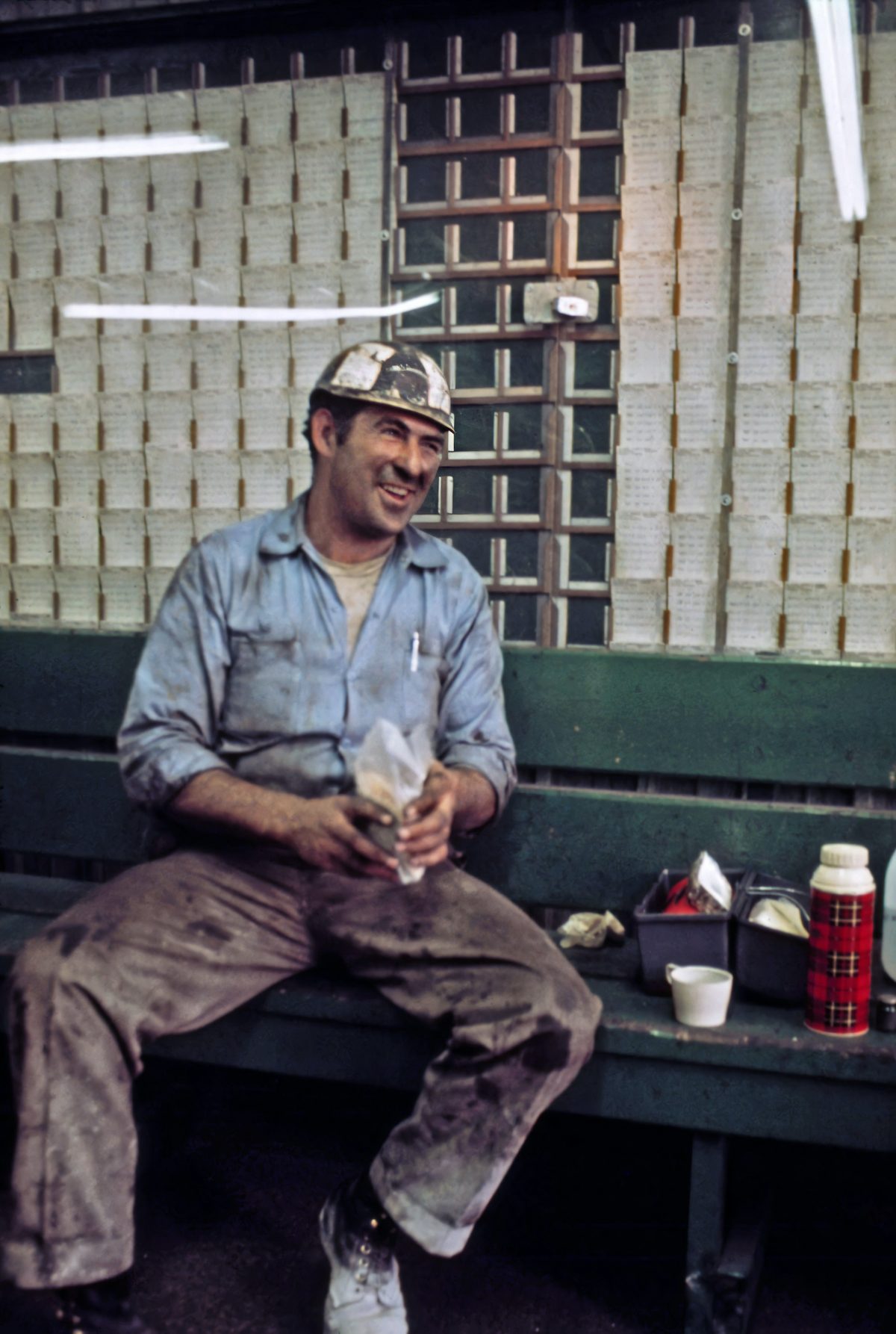 A miner spreads his lunch out on a bench in the shower and time card room of the Virginia-Pocahontas Coal Company mine #3 near Richlands, Virginia. He hauls equipments into the mine during his work shift. 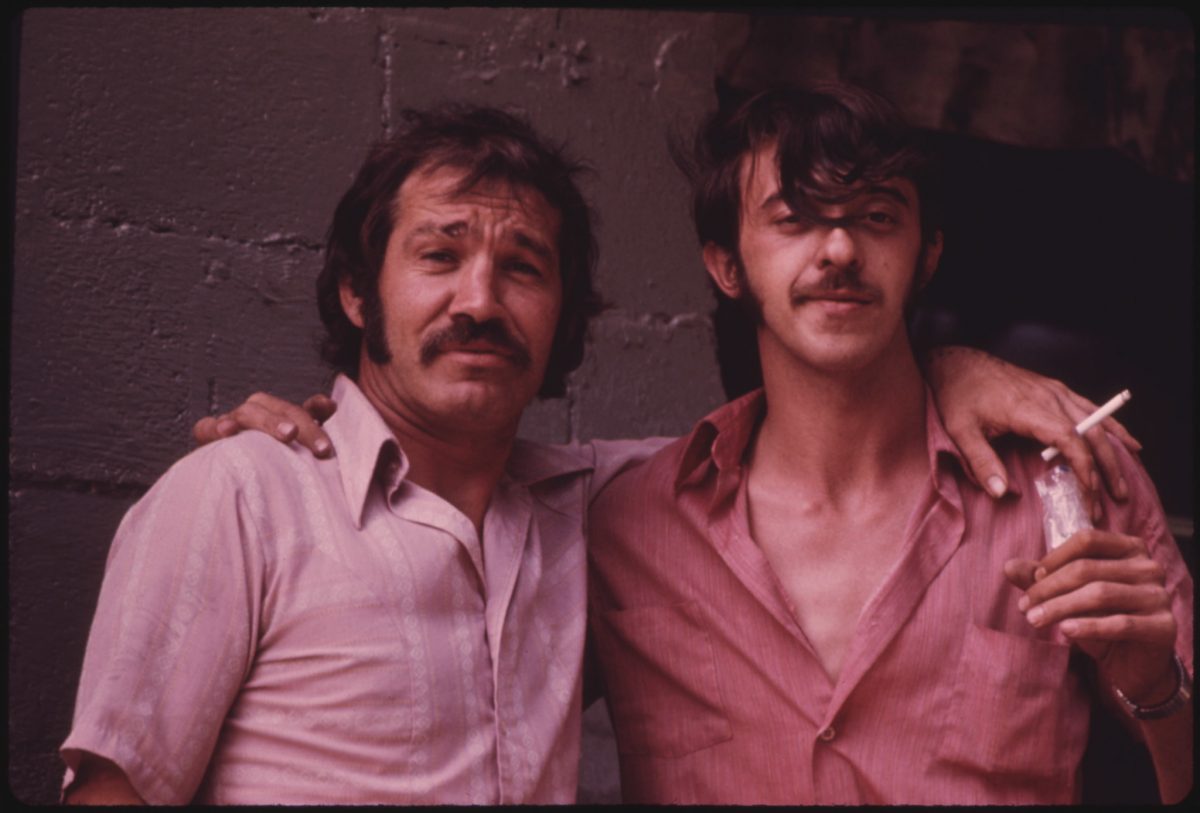 Two Miners Relaxing in a Beer Joint after Finishing Their Shift There Is Little to Do in Many of the Small Mining Towns for the Young Men Other Than Drink Beer and Talk. They Are Shown in the Tavern Operated by Jack Smith, Rhodell, West Virginia, near Beckley 06/1974 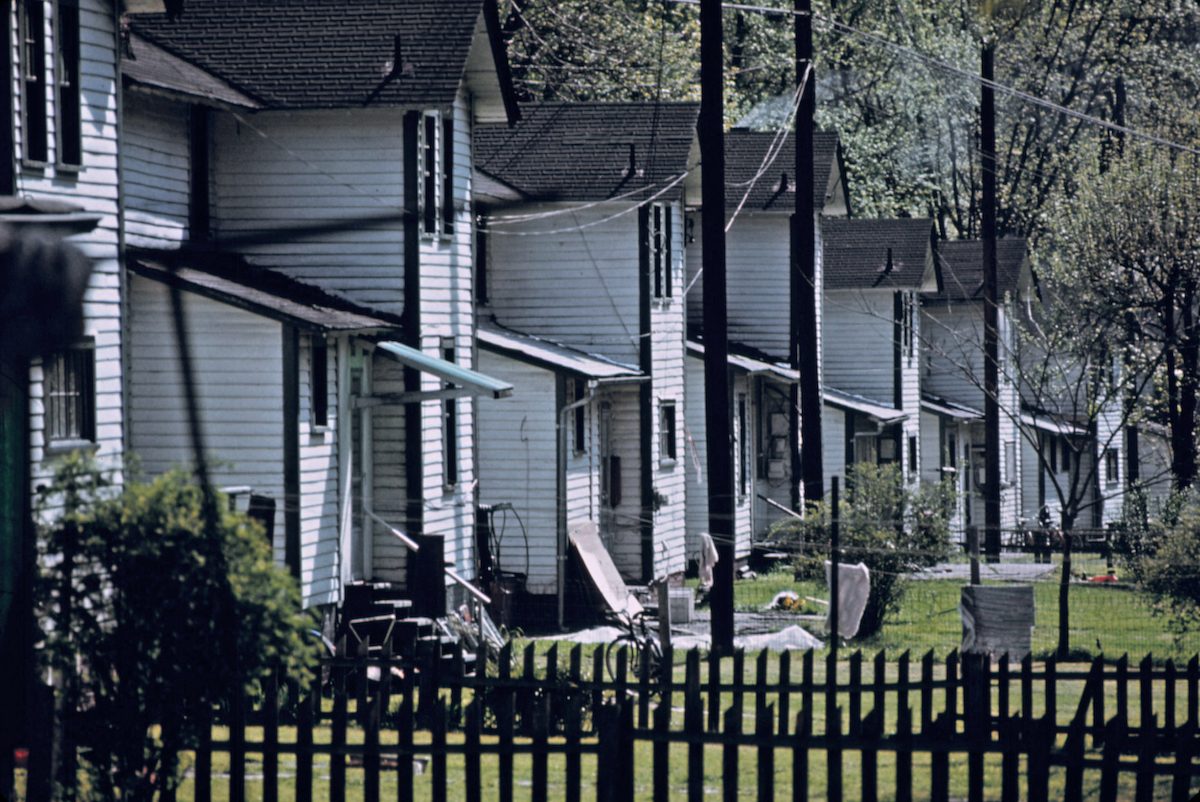 Rear view of Supervisors’ Housing in Dehue, West Virginia, a Youngstown Steel Corporation Company town near Logan. In the older housing the supervisors were given two-story homes with four rooms on each floor while the workers received one-story four room dwellings. The houses also were separated, symbolic of a caste system that is now becoming a thing of the past. 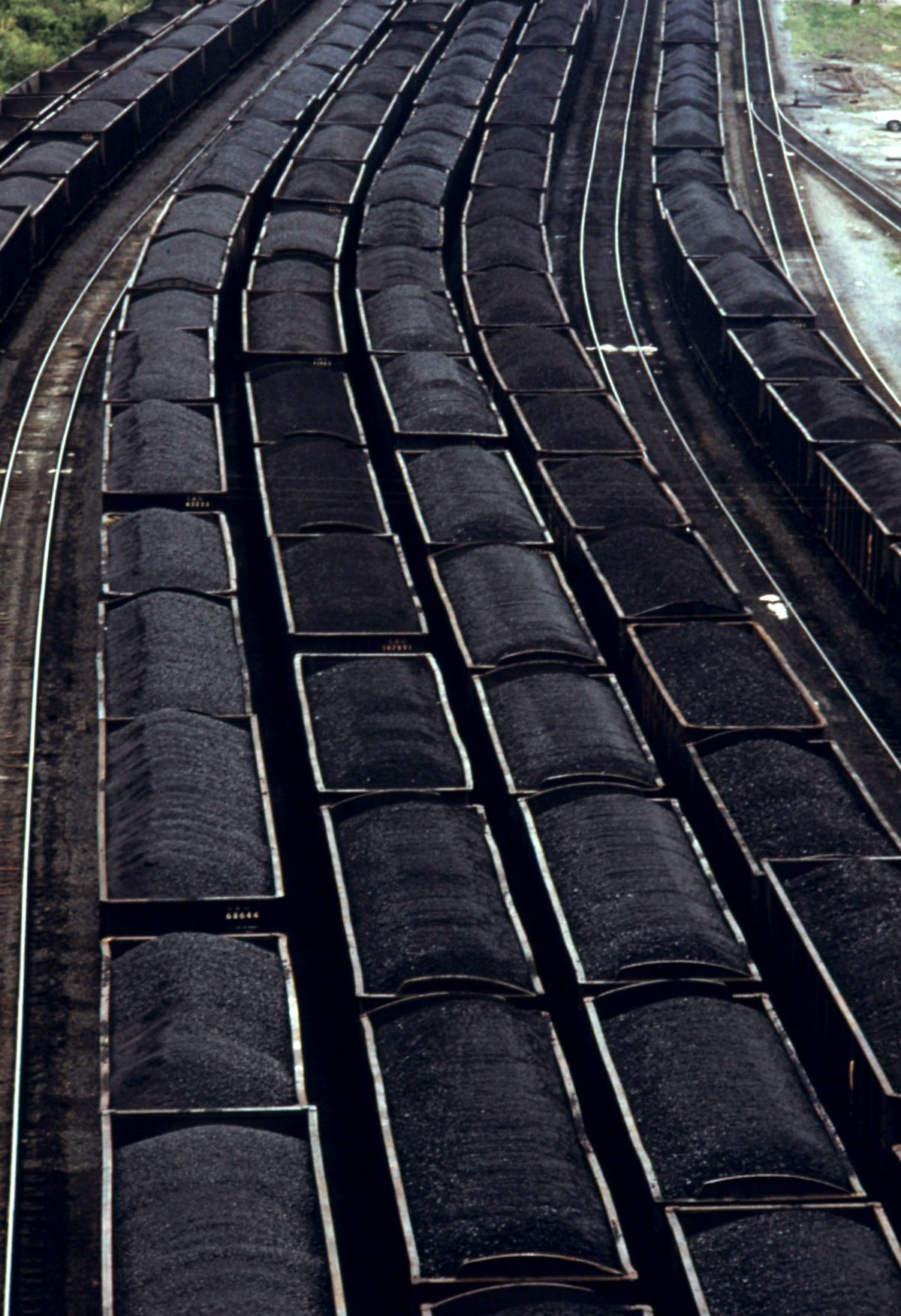 Loaded coal cars sit in the rail yards at Danville, West Virginia, near Charleston. Awaiting shipment to customers. It is one of the largest trans-shipment points for coal in the world. A constant stream of rail cars is moved in and out of the small town. 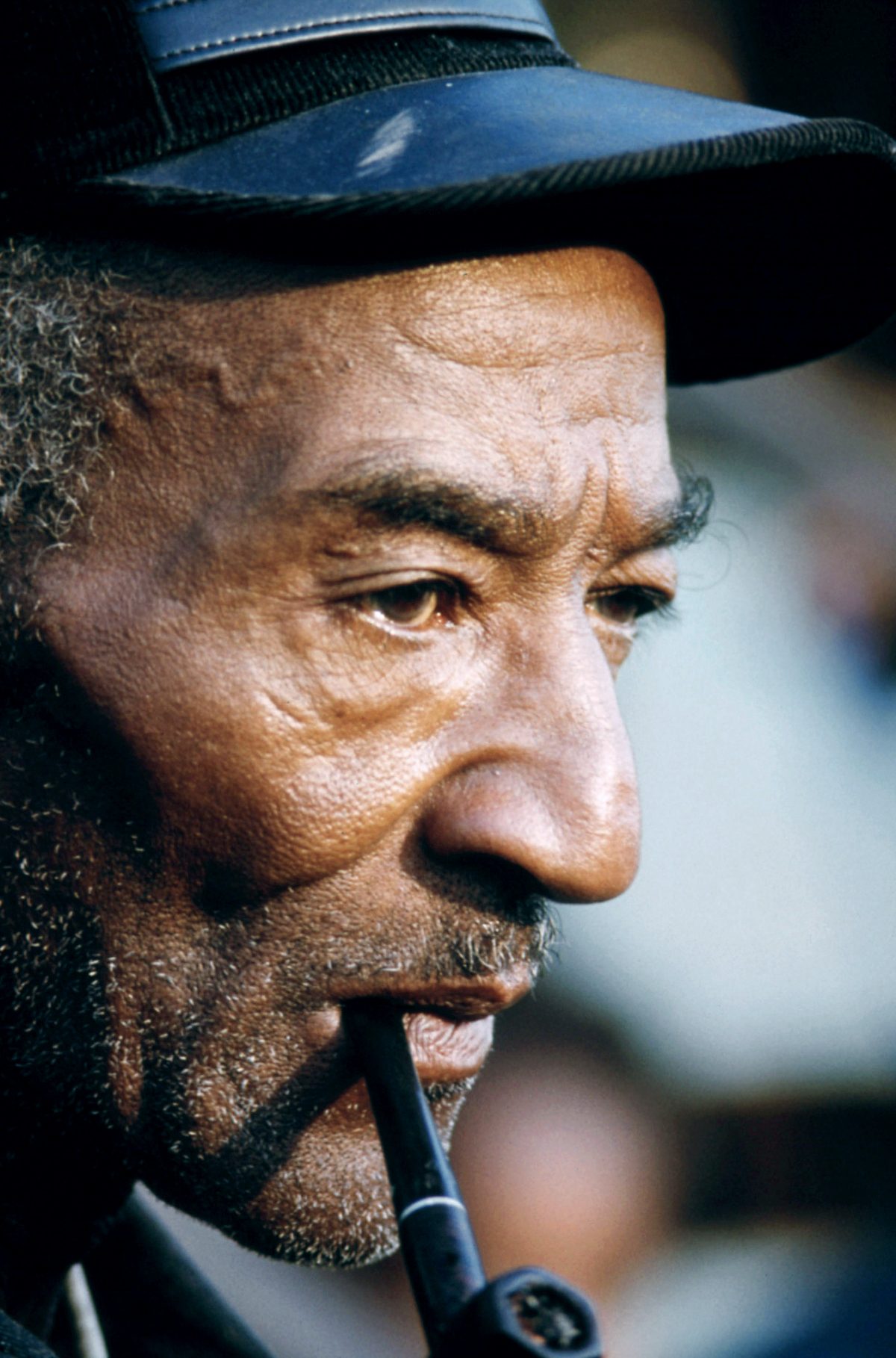 Edward Austin, 64, lives in the black portion of Fireco, a small town near Beckley, West Virginia, in Raleigh County. He receives Black Lung benefits and a United Mine workers pension, after w in the mines From 1925 to 1956. He has 20 children and does not regret having them one bit. 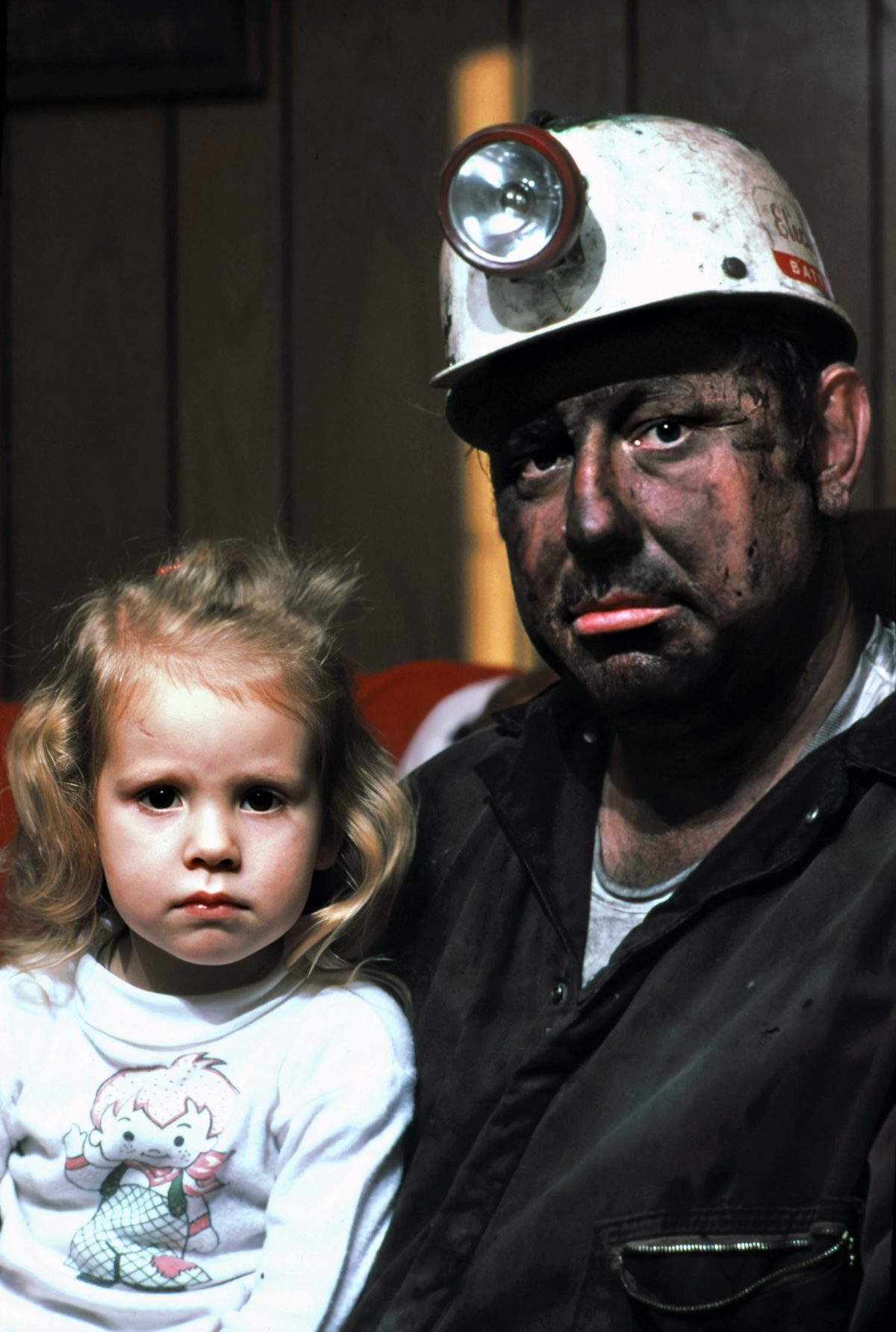 Miner Wayne Gipson, 39, with his daughter Tabitha, 3. He has just gotten home from his job as a conveyor belt operator in a non-union mine. As soon as he arrives he takes a shower and changes into clothes to do livestock chores with his two sons. 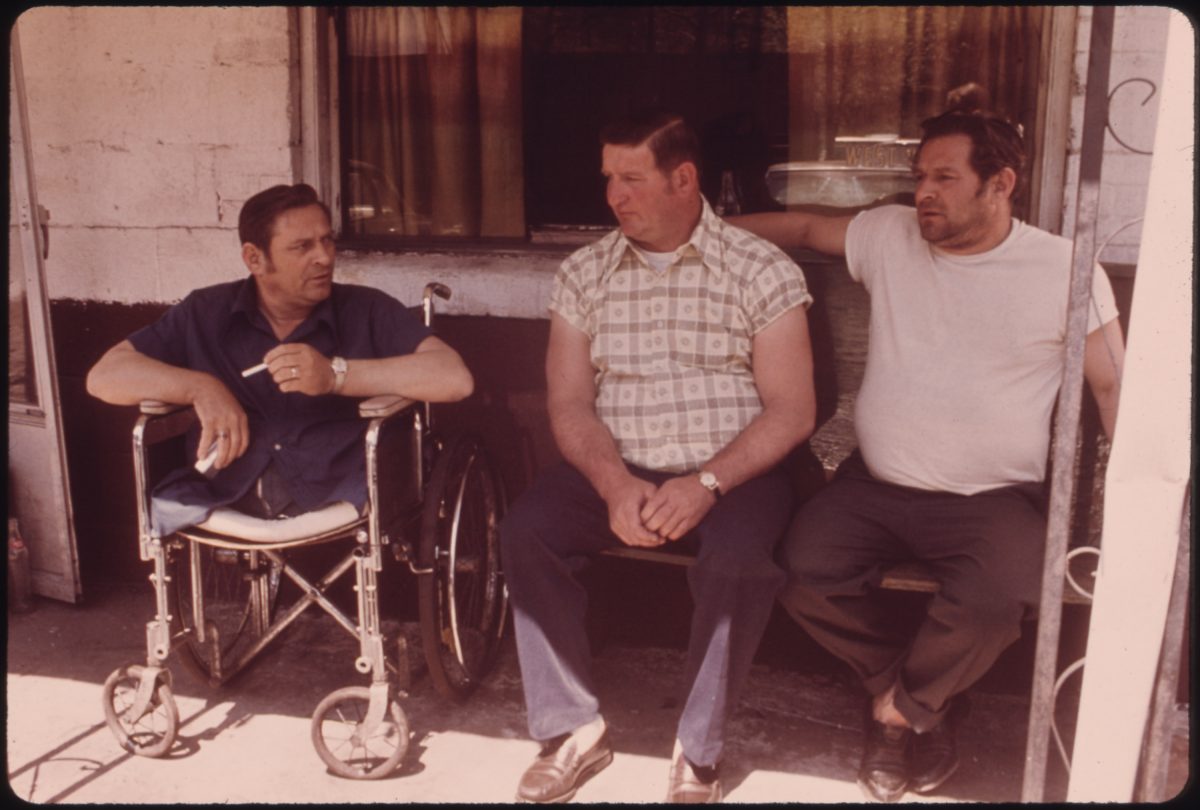 Jack Smith, 42, Left, Rhodell, West Virginia, near Beckley, Was a Miner Disabled When a Roof Caved in Who Had to Wait 18 Years to Get Workman’s Compensation. He Was 21 When Injured and Had Worked One Year in the Mines. of the Nine Boys and Seven Girls in His Family All the Males Went Into the Mines Except One Who Died in Infancy Smith Is Shown on the Porch of the Beer Joint He Operates. Seated with Him Are His Brothers, Leo, 39, and Twin Roy, 42 04/1974 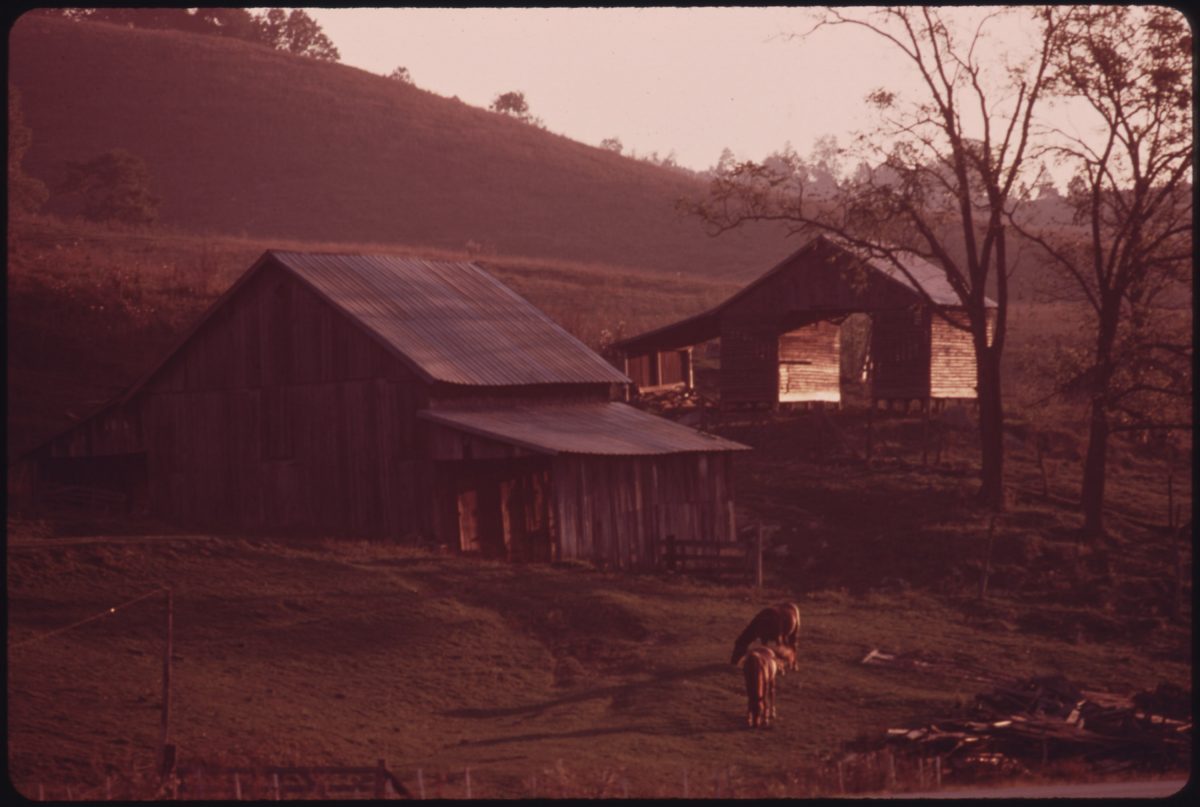 Early morning light enriches a bucolic scene at Claypool Hill, near Richlands, Virginia, about a dozen miles from the coal mines, 10/1974 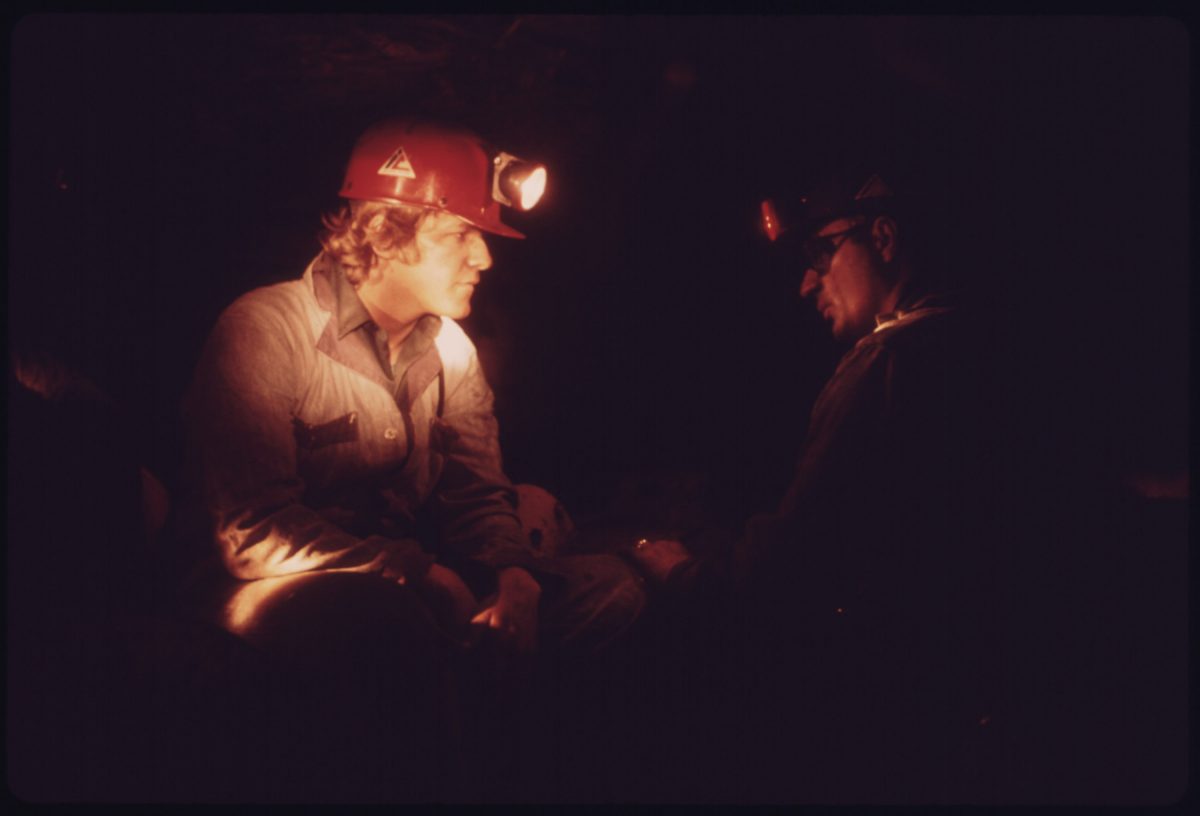 Veteran miner Harold Stanley, right, talks to a young miner who has come into the mine for the first time after 40 hours of classroom training. Stanley placed his hand on the new man, shined his lamp in the miner’s face and said ‘Be alert, be safe, and uns (you) will be a good miner and get along just fine.’ this is Virginia-Pocahontas Coal Company Mine #3 near Richlands, Virginia, 04/1974 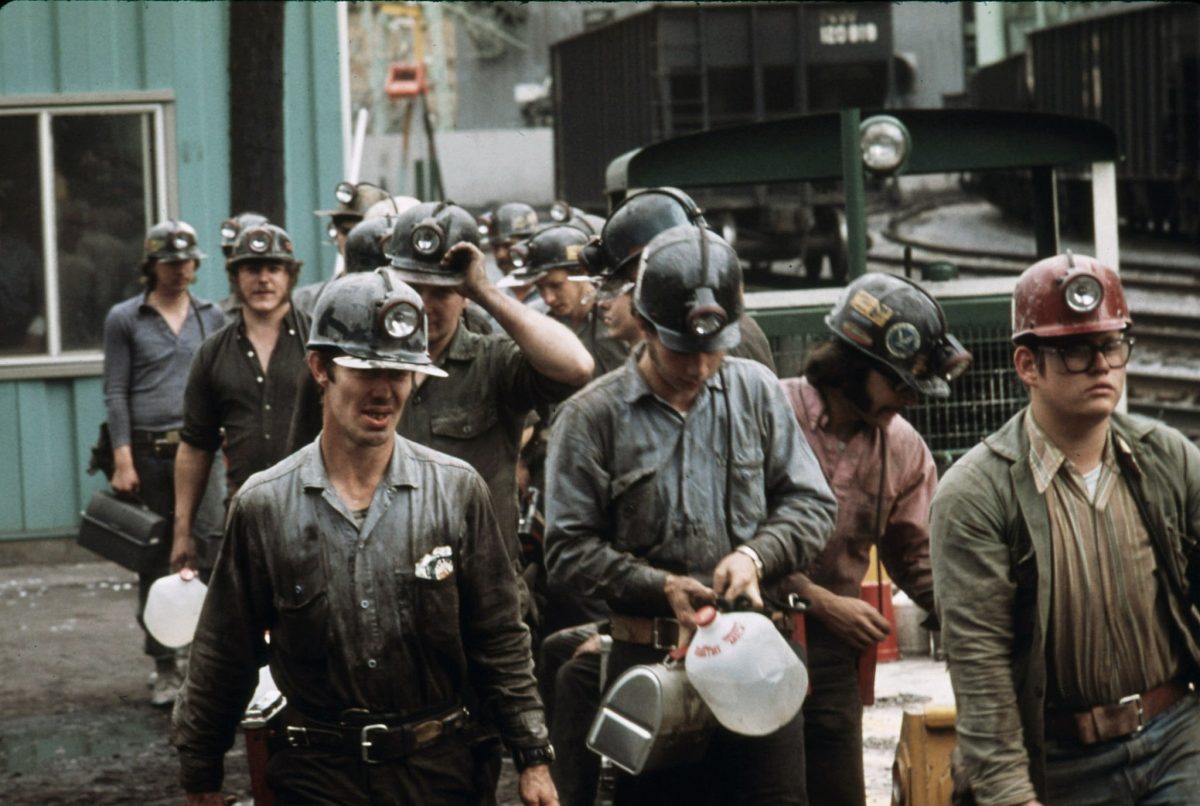 Miners Line Up to Go Into the Elevator Shaft at the Virginia-Pocahontas Coal Company Mine #4 near Richlands, Virginia the Man at the Right Wears a Red Hat Which Means He Is a New Miner and Has Worked Below Less Than a Month. His Belt Also Shows Less Wear Than the Others. The Miner at the Left Carries Red Man Chewing Tobacco, Used by Many of the Men Because They Cannot Smoke in the Mines. They Also Prefer to Carry Their Own Water Rather Than Use What the Company Provides 04/1974

Jack Corn began his career as a staff photographer for The Tennessean, where he worked for over two decades and eventually became the paper’s chief photographer and photo editor. From there, he went on to work for the Chicago Tribune and teach in the journalism school at Western Kentucky University.

Buy prints from the Documerica project in the shop.