Thousands of homes were ruined. Hundreds of people killed.

“Particularly heavy was the attack on Coventry, where numerous engine works and aero accessory factories as well as other targets of military importance were attacked with bombs of heaviest calibre, causing extensive damage.”

When the last attack came in August 1942, Coventry had been hit by 41 actual raids; 1,236 people had been killed – 808 buried in a mass grave in London Road Cemetery.

The city was rebuilt. It featured Europe’s first pedestrian precinct. A new cathedral was built. The ruined one was left to lie alongside it.

These photos are taken from the Associated Press’s library. The caption are theirs, written at the time: 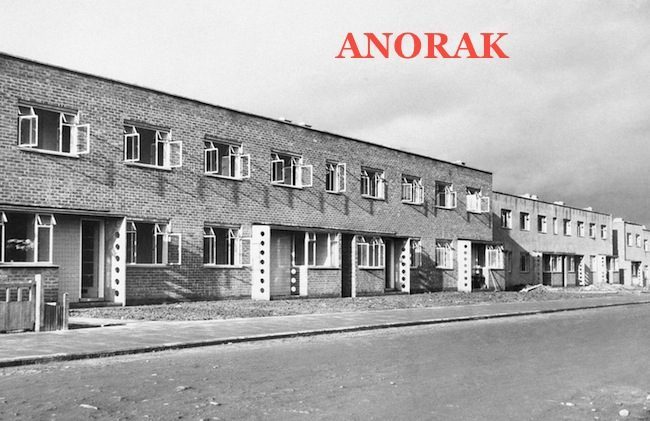 An ultra-modern housing development arising from the ruins of blitz-bombed Coventry is this British city’s answer to attempts of German air raiders to the city off the map. Despite shortages of material and labor, the first blocks of houses in the new development, including those, were ready for occupation in December 1941, and others were in the process of completion. Grouped in blocks of four with varying building lines to avoid monotony, the houses are double-fronted and have three bedrooms. Concrete has used in place of timber for beams, some floors, and staircases. All rooms-the parlor, living room and kitchen on the ground floor and bedrooms on the second floor are spacious. As seen in this picture, the houses are faced either is used for the entrance way in Coventry, March 11, 1942. Other details of accompanying pictures. AP Photo) 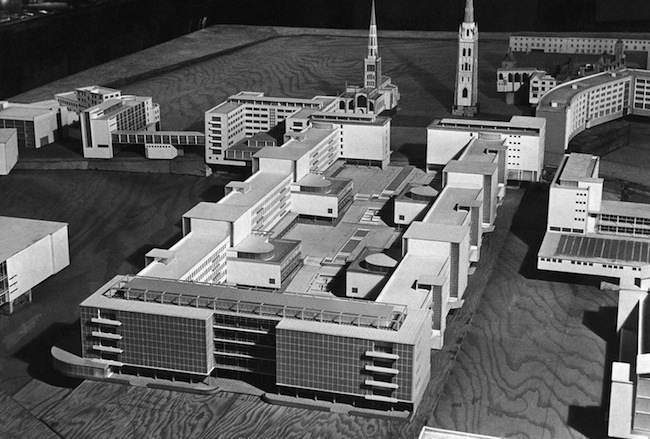 This city which felt the brunt of the blitz with which the Nazis hoped to terrify England into surrender is slowly rising again as a new city. Coventry may become a Dream City with a modern traffic system and streamlined building in the plans being developed by city architects. An incomplete model is shown Nov. 13, 1943 and shows a sharp contrast with the scenes of the old wreckage of the city. Although the buildings in the model may be shifted about; they are all modern and streamlined. The model will be given to the city by without missing an edition, even though its plant was destroyed by a bomb. The newspaper was temporarily printed in nearby Birmingham. (AP Photo) 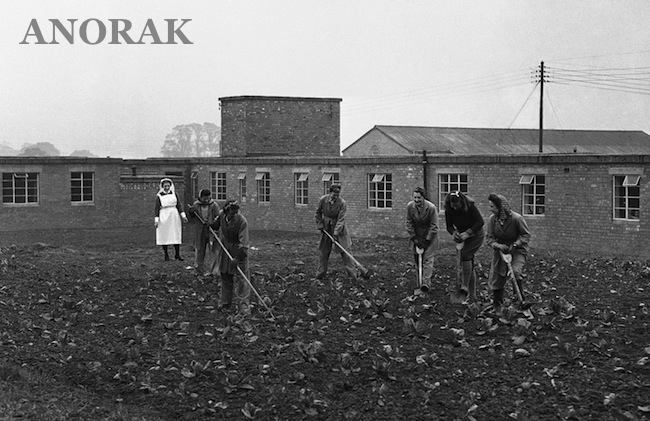 Here are land Army girls in a patch of ground they have cultivated on Oct. 18, 1943. A nurse from the hostel’s hospital, the brick building in the background, looks on. The hostels are also equipped with dining halls and libraries. Only adult war workers live here. Most of them are young and unmarried. Married folk with children have to arrange for their youngsters to be cared for Elsewhere. (AP Photo) 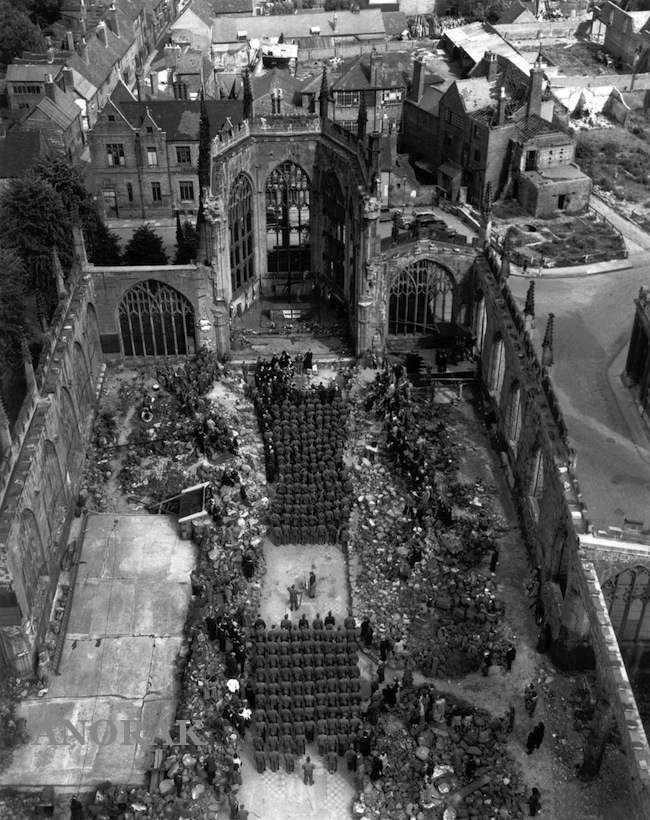 Inside the ruins of Coventry Cathedral in England, destroyed by German air raids in 1940, wounded U.S. soldiers attend a Mother’s Day service on May 13, 1945, a few days after the end of World War II. The men are patients from nearby convalescent hospitals. (AP Photo) 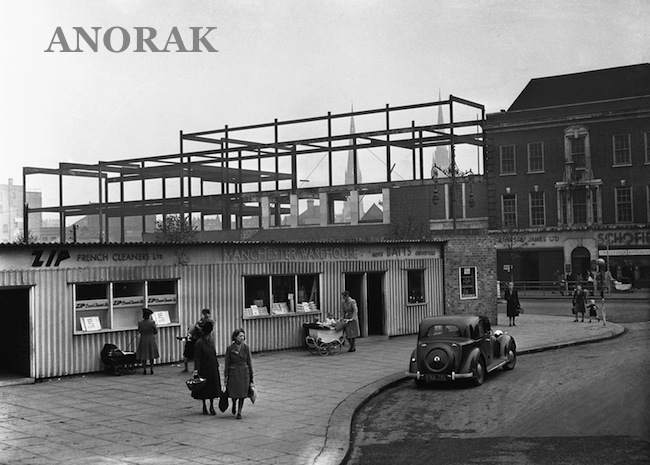 Housewives shopping for rationed food and clothing for their children on Oct. 18, 1943. Windows of these city-built shops are kept small to facilitate replacements and lessen danger from flying glass in air raids. In the rear of the bungalow-type shops looms the rusty framework of a building which was started before the âblitzâ but never finished. Because of the scarcity of paper bags, housewives carry their groceries home in wicker baskets or bags made of netting. (AP Photo) 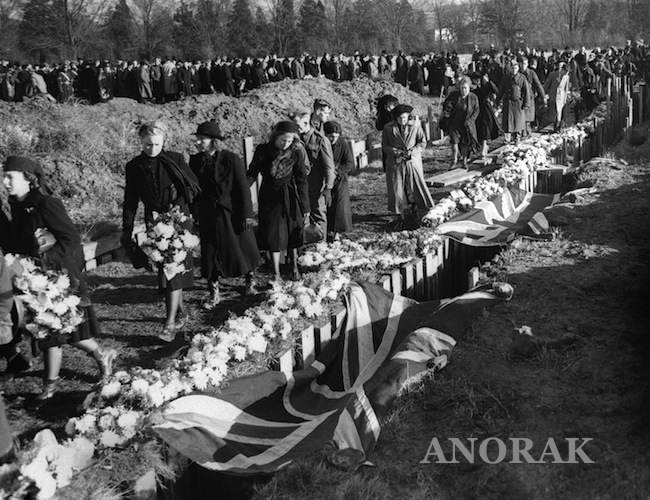 While anti aircraft guns barked at a lone German Raider Overhead, 172 of some 300 persons killed in an all night raid of Coventry November 14, were buried in a common Trench Like Grave on Nov. 20, 1940. Mourners file past the coffins which were laid three deep. (AP Photo) 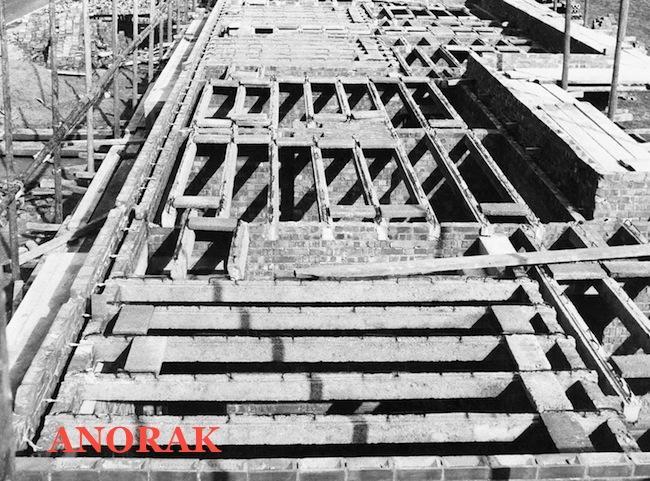 Shortages of wood for home building purposes prompted use of pre-case concrete for beams, floors and many other parts of Coventry’s Canley Estate Housing Development, March 11, 1942. The pre-case floor beams in place stages of the house construction. (AP Photo) 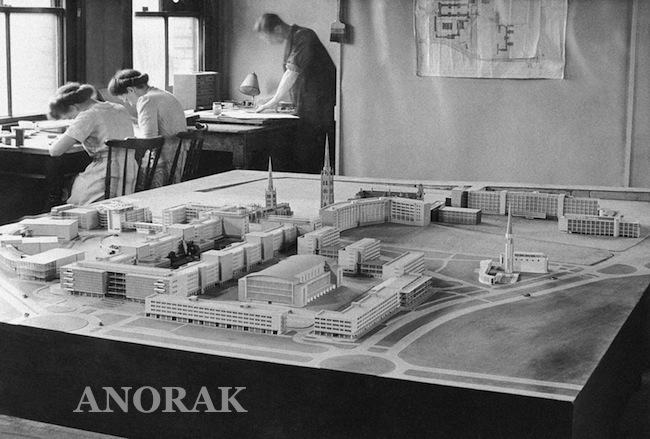 Coventry may become a Dream City with a modern traffic and streamlined buildings system/ in the plans being developed by city architects. An incomplete model is shown, Dec. 2, 1943. The model will be given to the city by its daily newspaper, the Midland Daily Telegraph, which weathered the blitz without missing an edition, even though its plant was destroyed. The newspaper was temporarily printed in nearby Birmingham. You can take your pickz of these model shots. That they are shifting the buildings about in an attempt to get the ideal setup, but these will give an idea of the ultra-modern buildings they are planning. These pix will contrast sharply with the scenes of the old wreckage. These model city pix were obtained under the stipulation they would not be reproduced in Great Britain. (AP Photo) 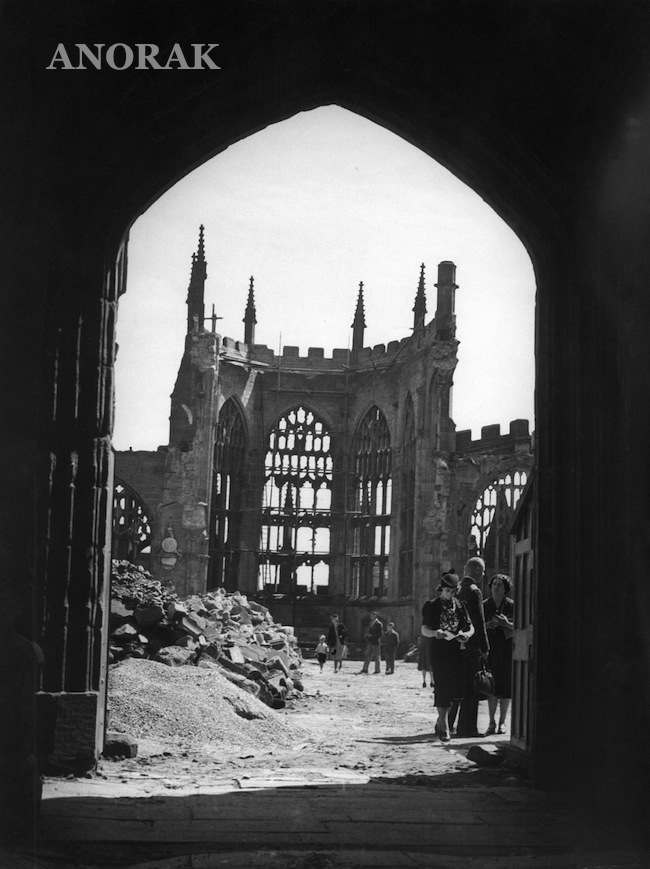 Only a stone skeleton remains of the Cathedral at Coventry, England, following the raid on the Midland City, Sept. 16, 1941. Visitors inspect the wreckage of the nave and choir and only a part of the apse stands, its windows blown out. (AP Photo) 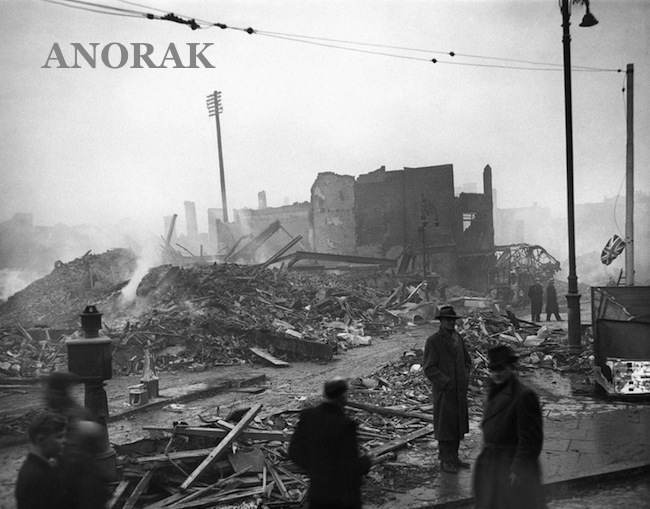 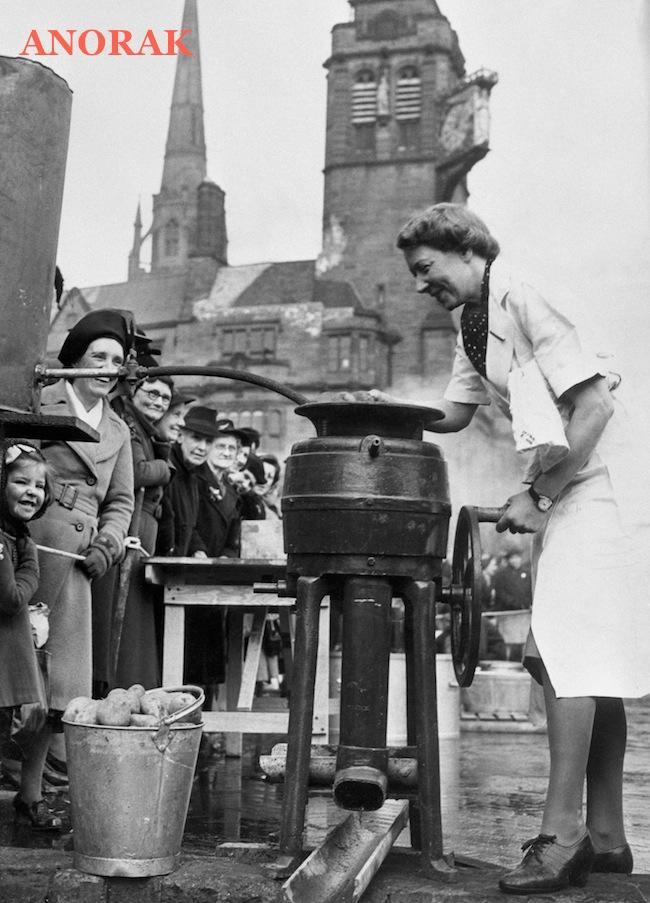 A lady operates a semi-mobile canteen on the streets of Coventry following Lord Woolton’s statement that the Ministry of Food had completed arrangements for feeding 20 percent of the population of Great Britain and Northern Ireland in the event of an emergency. Plans had been made for providing over 20,000,000 hot meals a day or 5,000,000 full course meals. 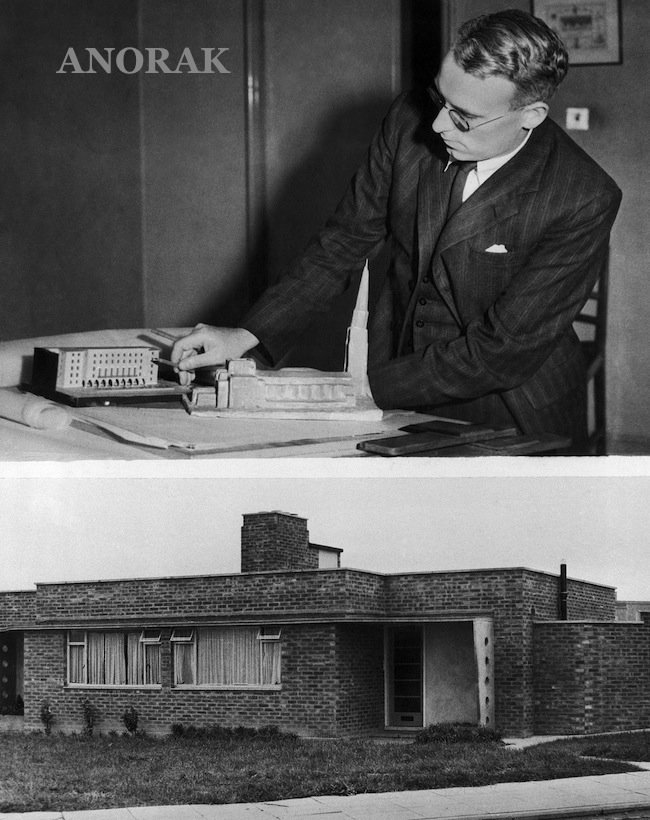 Chief Architect D.E.E. Gibson of Coventry, England, heads a staff laying out plans to make Coventry a “dream city” of the future. He is (upper) looking over small working models of a church and office building. It is Gibson’s job to build a new Coventry from the ruins of the old city wrecked by Nazi bombs in 1940. It may take 50 to 100 years in all, and cost $80,000,000. (lower): Because of the wartime shortage of labor and materials, terraced houses like this one had to be limited to one story for the present. After the war a second story will be added to them. They are located on the outskirts of the city, which borders on Shakespeare’s Forest of Arden. No steel and little timber is used in the construction. Beams are made of concrete, with slag from steel furnaces utilized in the concrete instead of gravel shown Nov. 12, 1943. (AP Photo)